I really miss my mom- but I miss her from my end - she would have so loved seeing the Africa photos and remembering her own trip to Africa.  I don't begrudge her decision to end the life she was living- it wasn't her life any more.  She hated being confined to - at best- a hour or two's drive from the apartment she lived in.

I remember one week, in summer weather, last year when I was down for a few days we drove quite a long distance to go to a sculpture park she had once been to.  It was one where the whole point was to drive through- so she could get "out" of the Lodges (her retirement home) but not have to do any actual walking.  By then she was wheelchair-bound in all but getting to the bathroom (used a walker.)

So off we went in my little car- and spent the better part of the day "OUT" - she was so happy just to have the change in scenery.  For someone with her wanderlust, being in the same place for (at that time it had been just over a year) was sheer torture.  As we turned toward home I suggested one more detour and introduced her to frozen custard at Culver's.  That was the last "trip" I took with my mom.  This must have been before my sister Janna died because I remember no conversation about the loss that day.

After June and the ordeal of Janna's death - she was never really the same.  She carried the shadow of that loss over her.  I was there in July and in August and in September.  In October Phil and I visited her for four days but November was so busy with out of country travel that I didn't make it until after my December Board meetings - and by then we had arrived at the ending stage.

I had always told her she couldn't die on me-  that I did NOT want to be an orphan.  In the end though, how could I not give her permission to leave?  It wasn't about me- it was about her- I loved her so much I had to let her go.  It was no longer her life.  I understood that.

But the loss is still so great - almost nine months later I still get whacked by the grief.  I want my mother back- the mother who only looked at her "portfolio" (LOL) when the market was up and who was always talking about where she wanted to go next.  That's the mom I miss.  She was a spectacular mother; how could I not miss her? 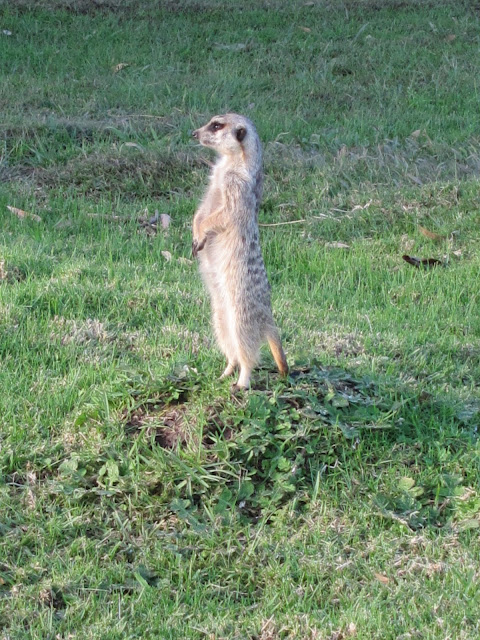 I chose this photo today because my mom loved the meerkats and this was one we saw just hanging out at the Elephant Sanctuary in Knysna, South Africa.
Posted by TOR at 12:40 PM

Email ThisBlogThis!Share to TwitterShare to FacebookShare to Pinterest
Labels: mom