last night we saw the Pulitzer Prize winning play by Maxwell Anderson "Both Your Houses" at the Remy Bumppo Theater company. Unlike the Profiles Theater- they let folks in off the street more than an hour before the curtain time and then into the theater twenty minutes before the curtain time and the curtain went up less than five minutes after the time called for (getting any information from this one Profiles? - you should be!)

but back to the play at hand- a very large (for Remy Bumppo) cast put on the period piece that couldn't be more timely if it tried.... 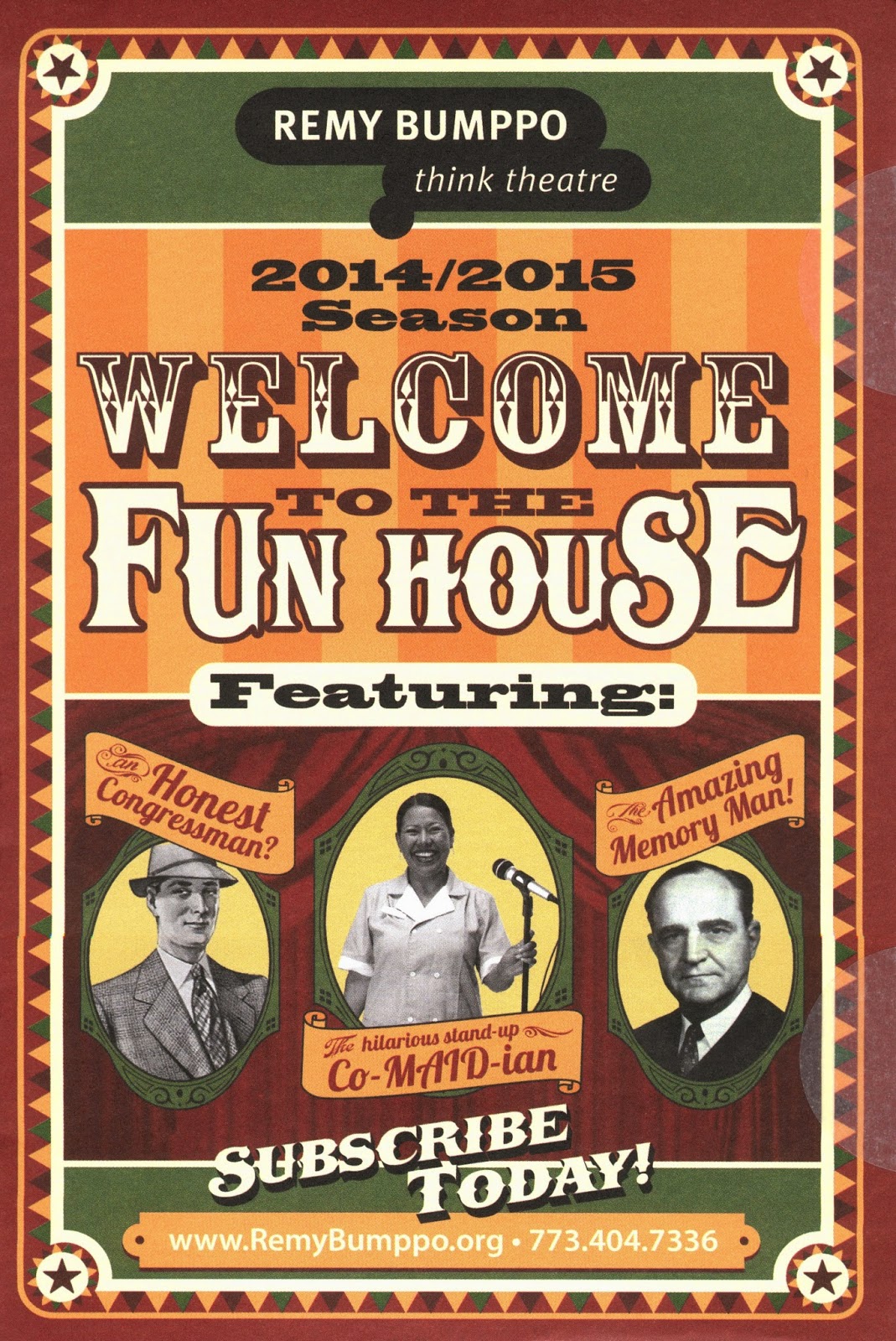 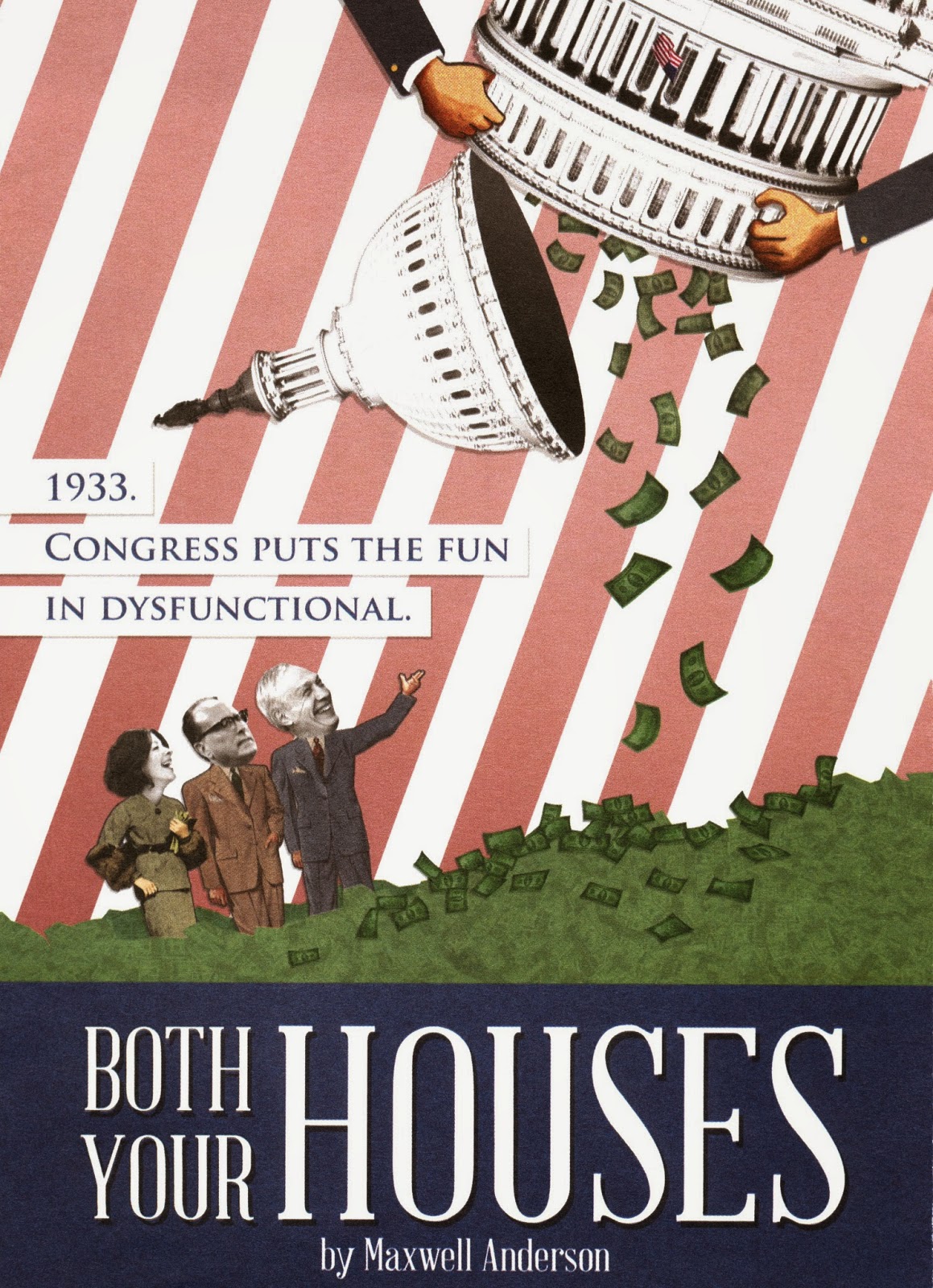 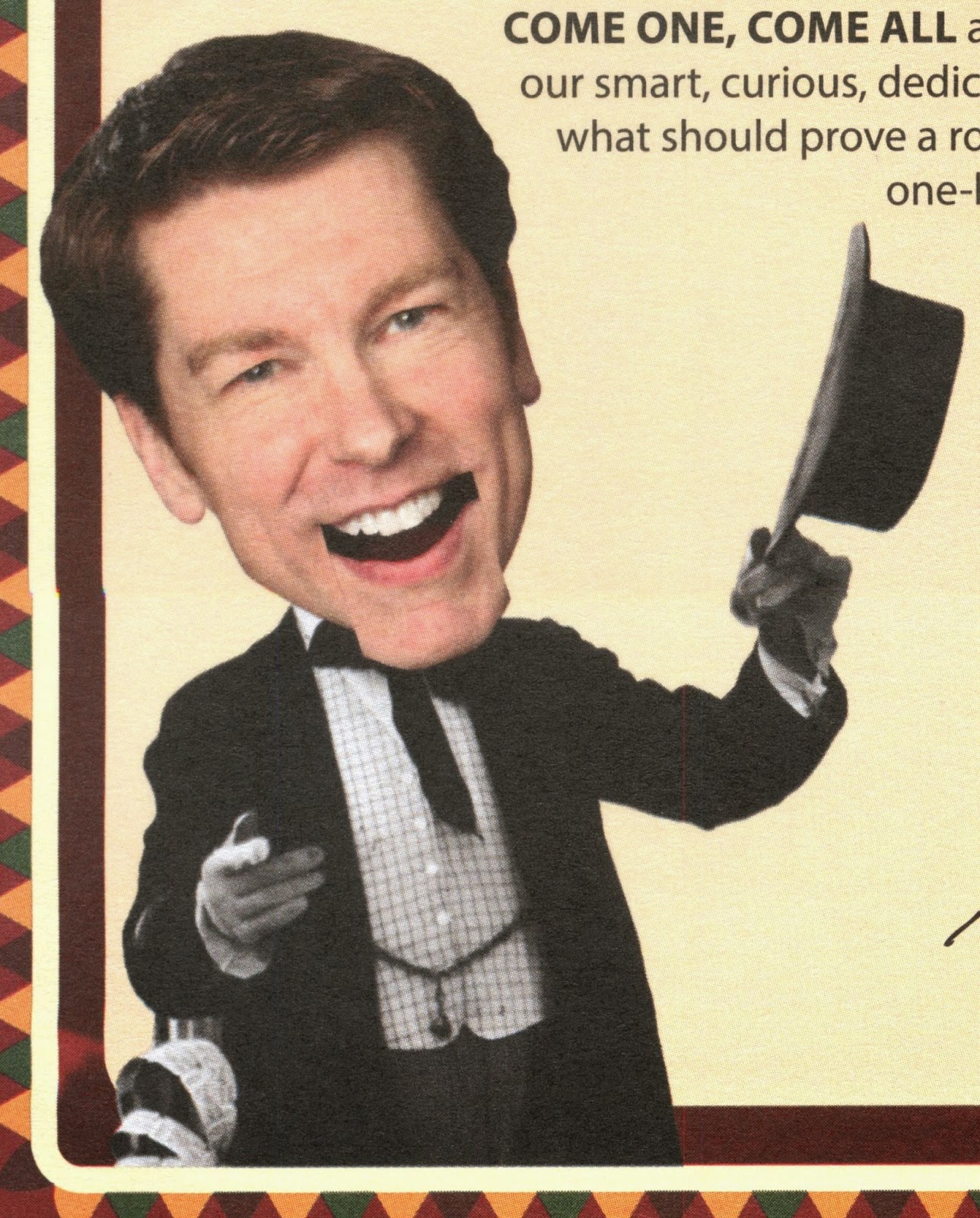 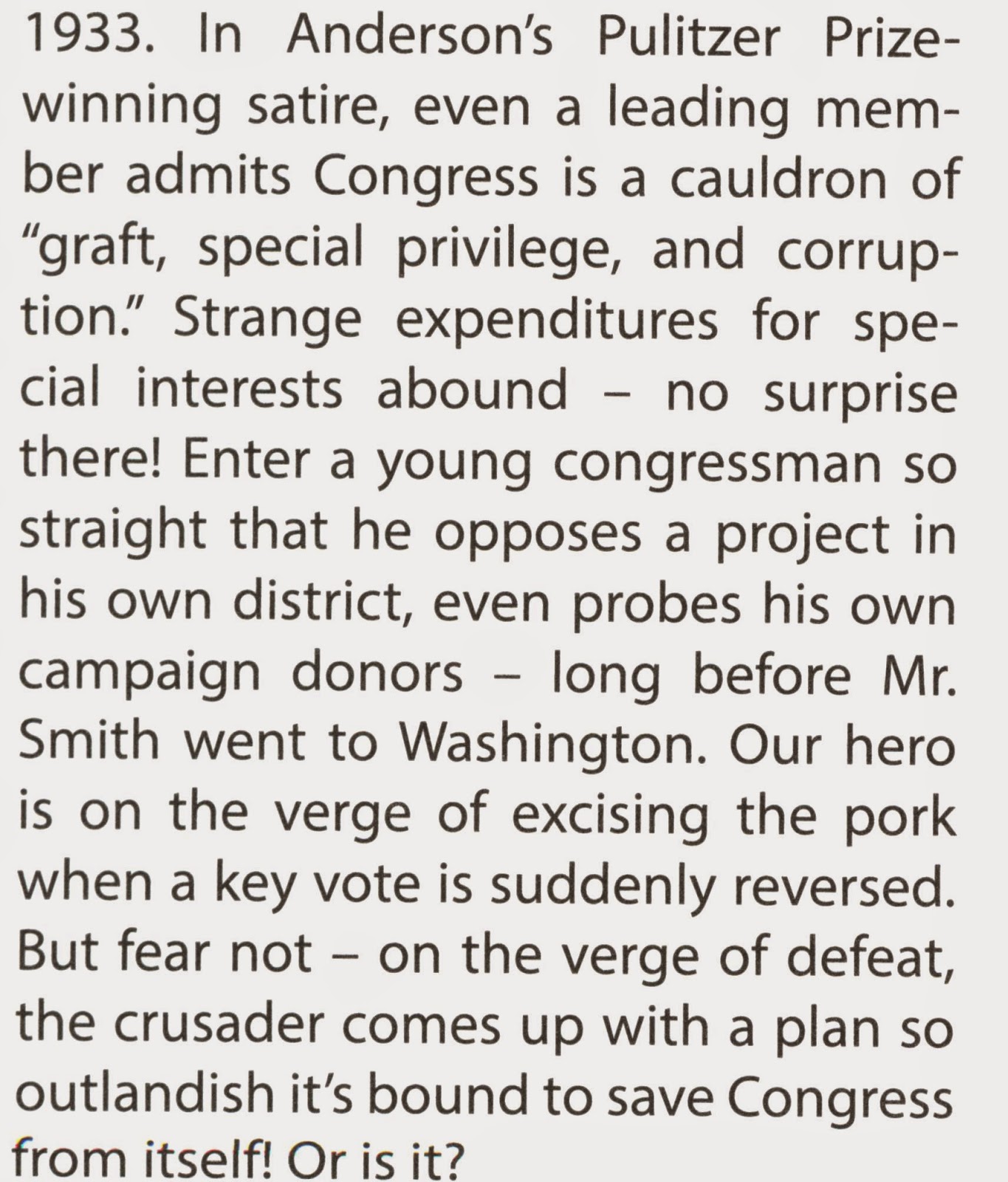 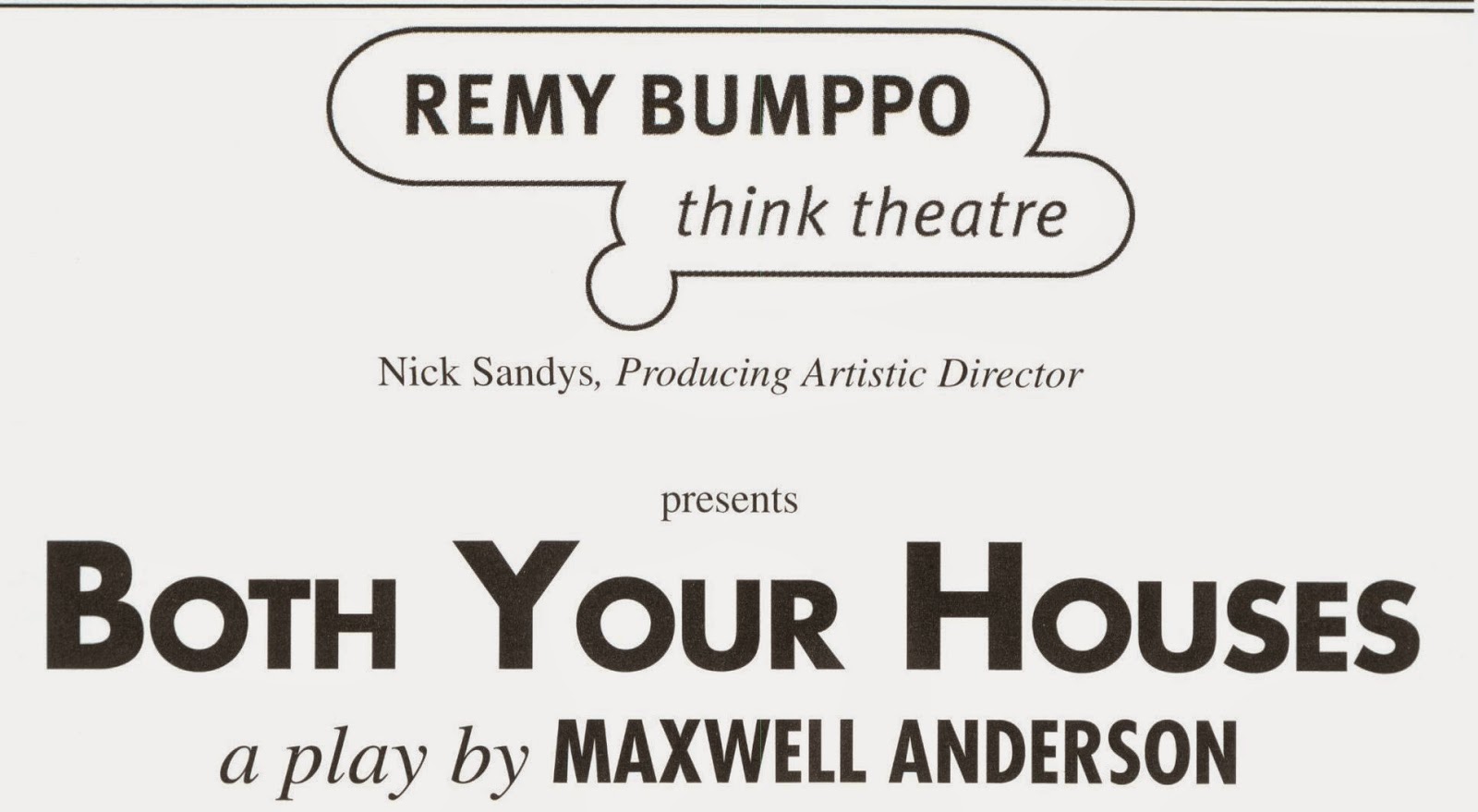 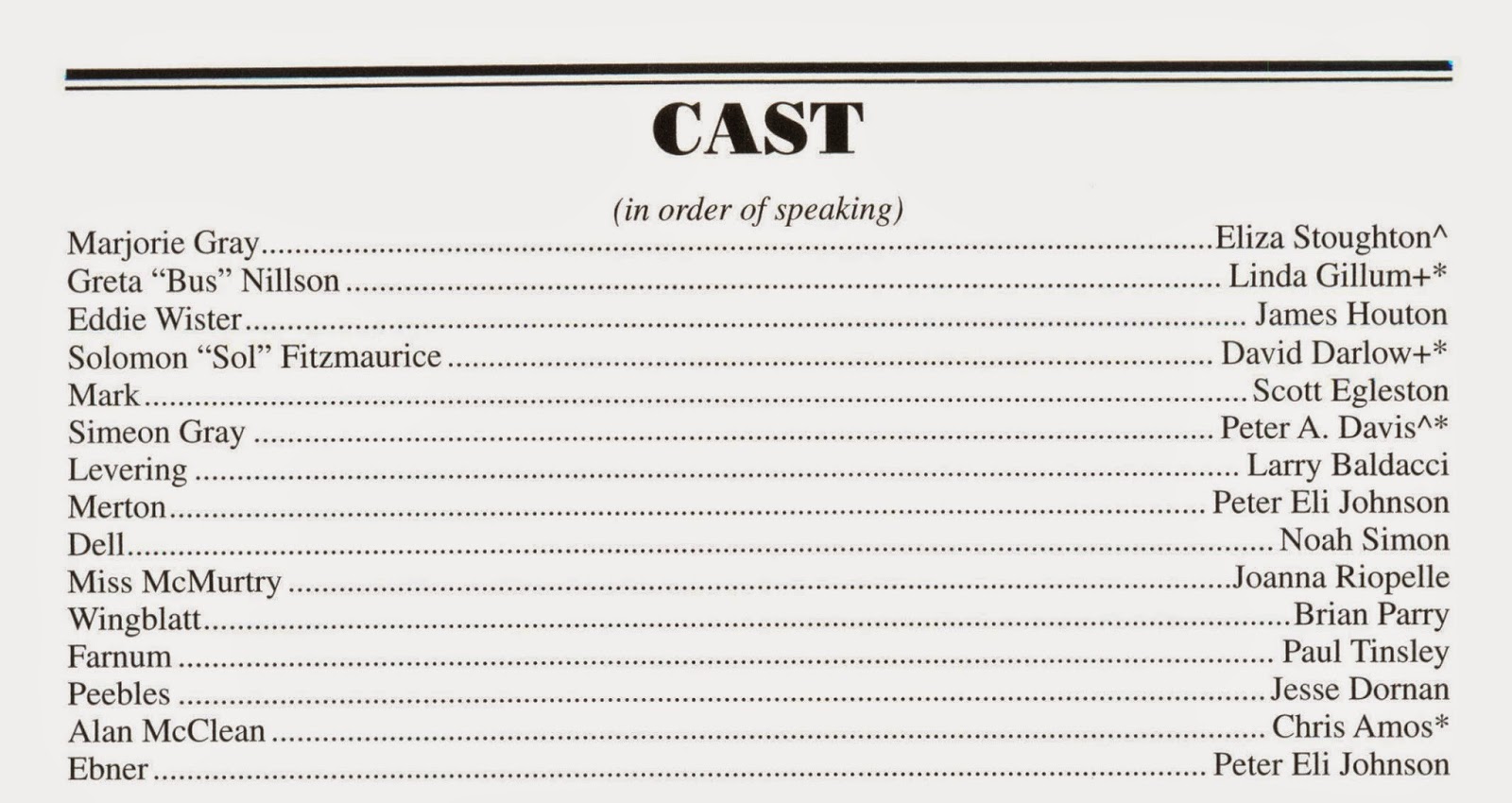 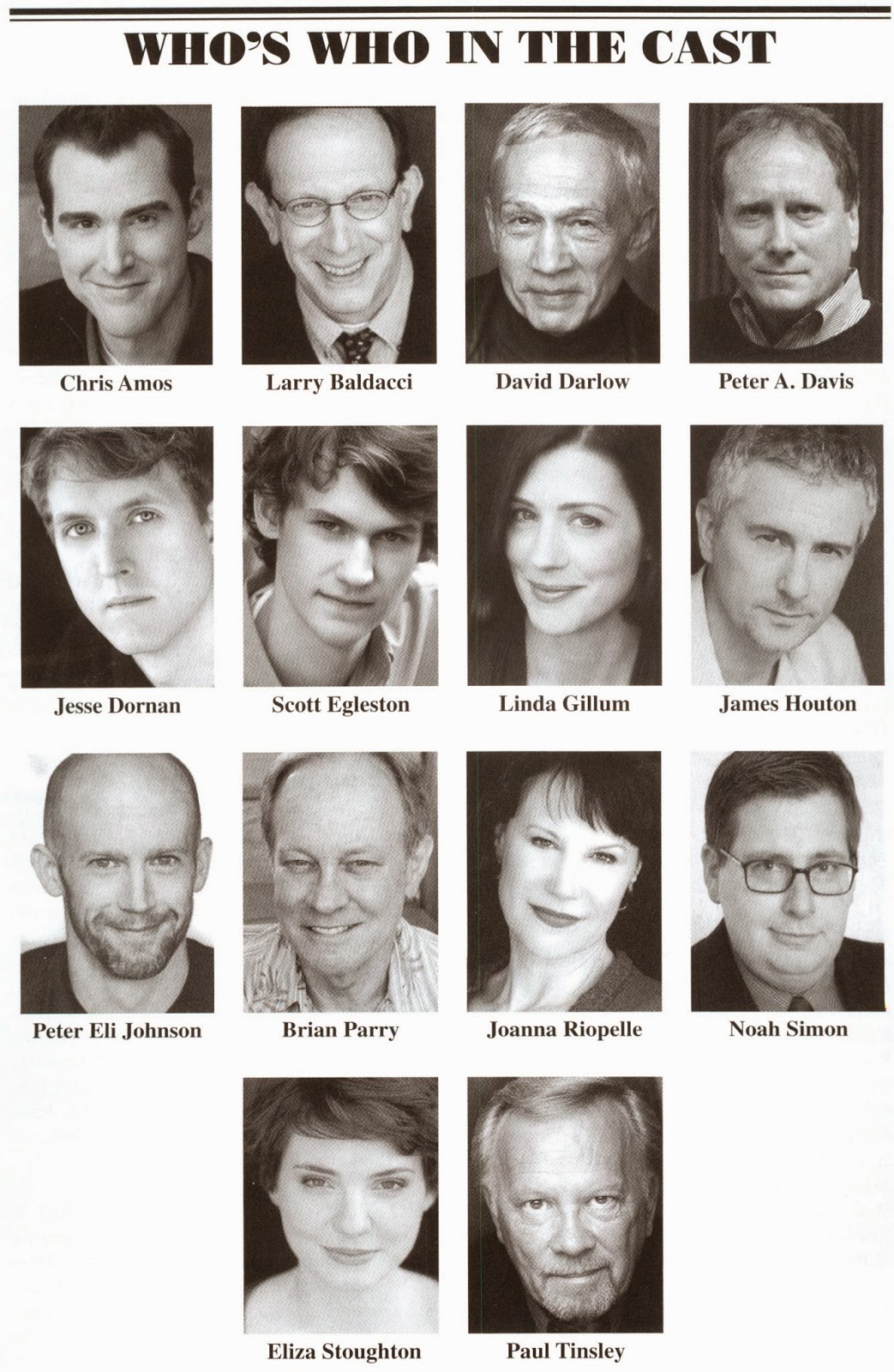 This play is from an era when quick snappy dialogue was king and the speed of the delivery of the lines might be an issue for the hard of hearing but it certainly put verve into the fun the characters were having - not unlike the James Spader performance in Lincoln - these guys (mostly) reveled in the chaotic process of divvying up the spoils available in the pork barrel additions to the spending/appropriations bill the president has asked for to complete a badly needed dam.

Although I didn't find the story such that I was on the edge of my seat - that may be due to 21st century cynicism about the process that the 1933 audience may not have developed... the evening entertainment was worth going out for even in our recent spate of bad weather (cold and rainy)-

so I would give this one a slight thumbs up - unless you are a political junkie in which case I would go with full thumbs up... Enjoy the fun.  Good performances and witty dialogue carry the day.

next up on our calendar - a trip to Italy- Trieste, Venice and Bologna - so more later...
Posted by TOR at 4:01 PM No comments:

Just a brief post on our journey into LBO last night...LOL - LBO is our name for Land Beyond O'Hare... and it is not uncommon for city dwellers to be resistant to actually leave the city. However, we have friends that live well LBO who we really like and so when they invited us over for dinner we of course went.

years ago I would tell people that I only left my house to go to work and that I only left the city to get on an airplane to go some where else... we passed a suburb yesterday on our journey "over the river and through the woods" that both of us had heard of but neither would have been able to locate on a map- LOL - I always thought Clarendon Hills was someplace north vaguely near Libertyville or some such- LOL - soo wrong!

we arrived at 7 pm and for more than five hours managed to fill the time with excellent conversation and FABULOUS food (prepared by our chef- he loves to cook! and supervised by our hostess- she claims to not cook at all- LOL)

so since this was a dinner for just the four of us I didn't take tons of photos but I have a couple to share because the prep was so lovely and the food was so tasty!

we had lots of little bites appetizers - stuffed okra, jamon iberico, chicharones, Portuguese sausages, sauteed shrimp, olives of many kinds, garlic roasted peanuts- and probably some things I don't even remember... we had a couple of good whites and the 1985 Beaune Bressandes that Phil found in cellar organization and clean up that he has been working on... but the wine of the night was the 1955 Quinta do Noval- a 59 year old beauty that was still lively and fresh!

Our appetizers were followed by a lovely beet and endive salad and then wonderful Cornish hens grilled with lemon and rosemary and then a (3) cheese course with figs a perfect pairing with the port! 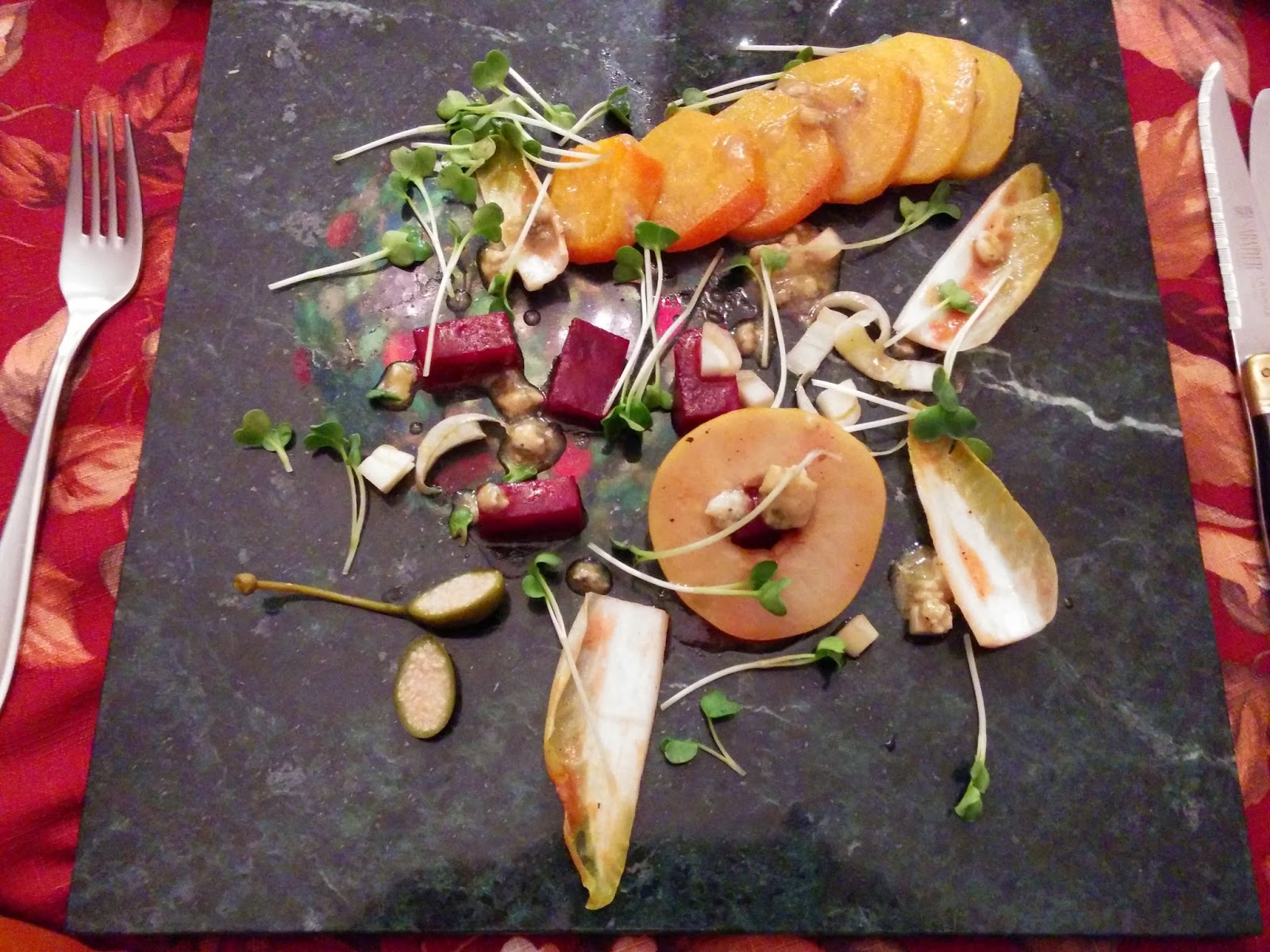 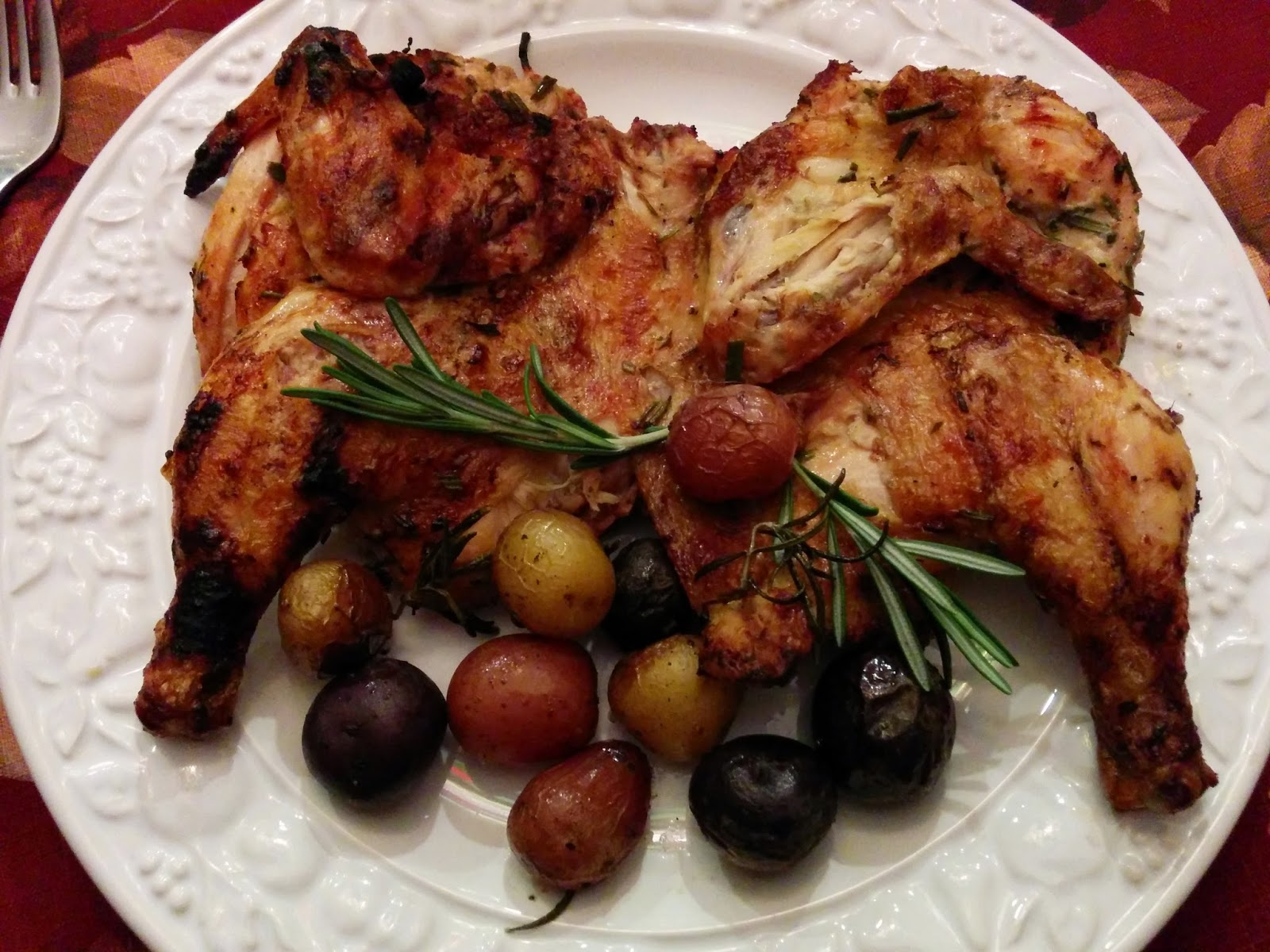 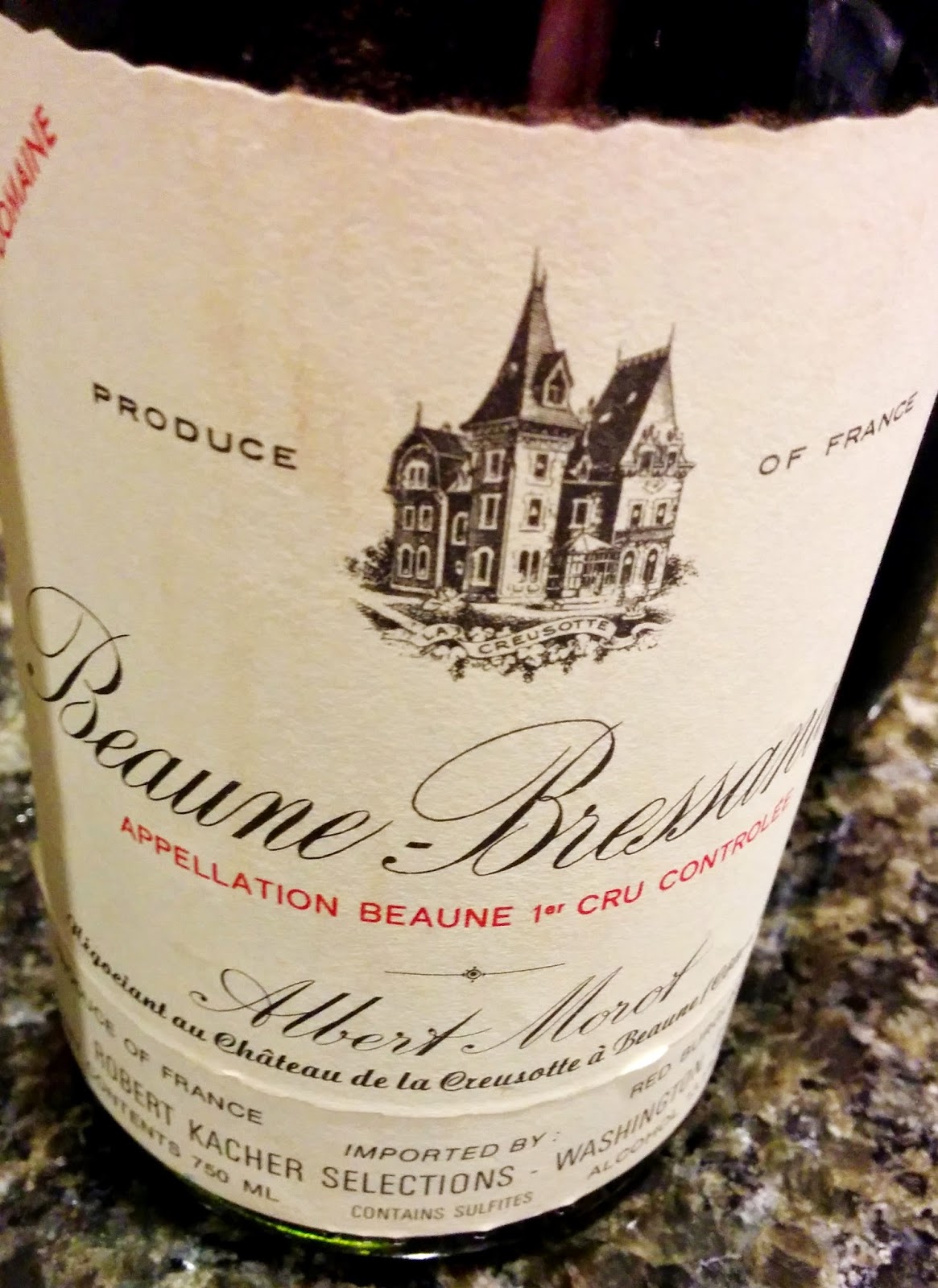 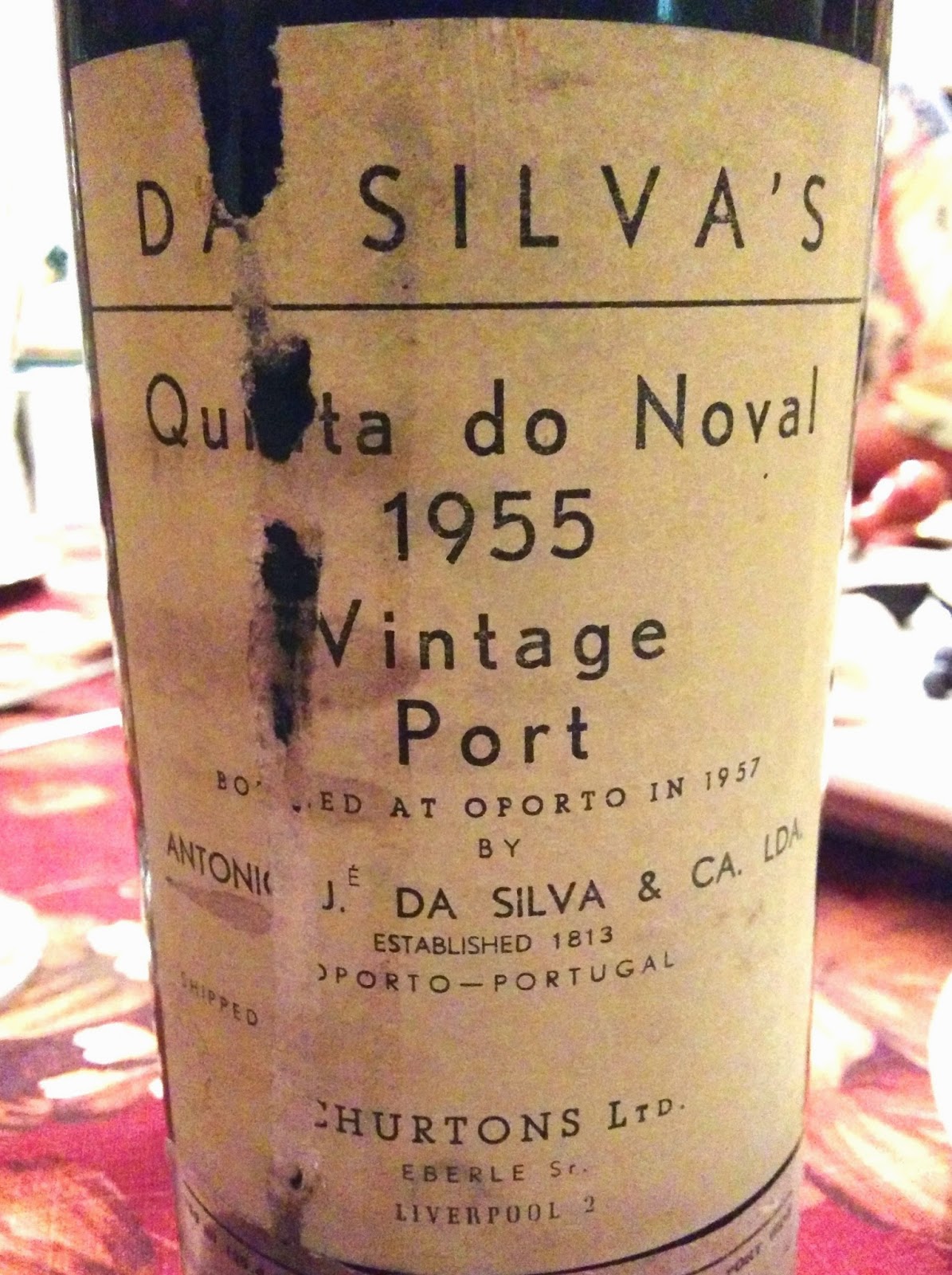 the drive home - between midnight and 1 am was smooth sailing back into the city and up Lake Shore Drive... no traffic to deal with so we were home in roughly 50 minutes!

Tonight - it's back to the theater for a production of Both Your Houses... so review will be coming tomorrow- then we really have to get packing for the Italy trip - leaving in three days...so stay tuned...
Posted by TOR at 11:50 AM No comments:

so today on the schedule is an old play by David Mamet... this is a new theater company to us- one we have never been to- so we don't know the venue or the company... however here is some background on the play-

The Cryptogram is a 1995 play by American playwright David Mamet. The play concerns the moment when childhood is lost. The story is set in 1959 on the night before a young boy is to go on a camping trip with his father.

from the theater website -
Profiles Theatre continues its 26th Season with the 20th Anniversary production of The Cryptogram by David Mamet, directed by Artistic Director Joe Jahraus. Pulitzer Prize-winning author David Mamet’s rarely produced masterpiece, The Cryptogram combines mercurial intelligence with genuinely Hitchcockian menace. The Cryptogram is a journey back into childhood and the moment of its vanishing—the moment when the sheltering world is suddenly revealed as a place full of dangers. On a night in 1959 a boy is waiting to go on a camping trip with his father. His mother wants him to go to sleep. A family friend is trying to entertain them—or perhaps distract them. Because in the dark corners of this domestic scene, there are rustlings that none of the players want to hear. And out of things as innocuous as a shattered teapot and a ripped blanket, Mamet re-creates a child's terrifying discovery that the grownups are speaking in code, and that that code may never be breakable.

a review of a former production:
The Cryptogram is set in a “normal” 1959 household, but the characters, a housewife, her son and a family friend, are no happier than any of Mamet’s con men or schemers. Donny, the housewife, and John, her son, wait at home for Bob, the husband and father, to arrive and take them camping. John finds a letter from his father on the stairs saying that Bob has left to be with another woman. Del, Bob’s best friend, wants to comfort the family and provides a substitute father figure for John. However, Donny finds out that Del let Bob use his home for assignations with his lover, and she kicks him out. Meanwhile, John, an insomniac, begins to hear voices. He tries to talk to his mother, but she is too caught up in her own abandonment to hear him. Her anger explodes in the final scene. The powerful symbolism of objects plays a role in the play, and John’s father’s knife is the most important object. In the end, Del gives the boy the knife and tells him to go. John holds up the knife ominously, and the play ends.

the history of the production (from Wikipedia)
The Cryptogram received its world premiere in July 1994 at the Ambassadors Theatre in London, followed by US productions at the American Repertory Theater in February 1995 and Off-Broadway at the Westside Theater Upstairs in April 1995. Directed by Mamet, the play won the Obie Award for Best Play and Best Actress for Felicity Huffman. Arguably one of the most prolific and influential playwrights of the latter-20th century, David Mamet amassed an acclaimed, award-winning body of work.

the actors were very good- in the case of young John, excellent! 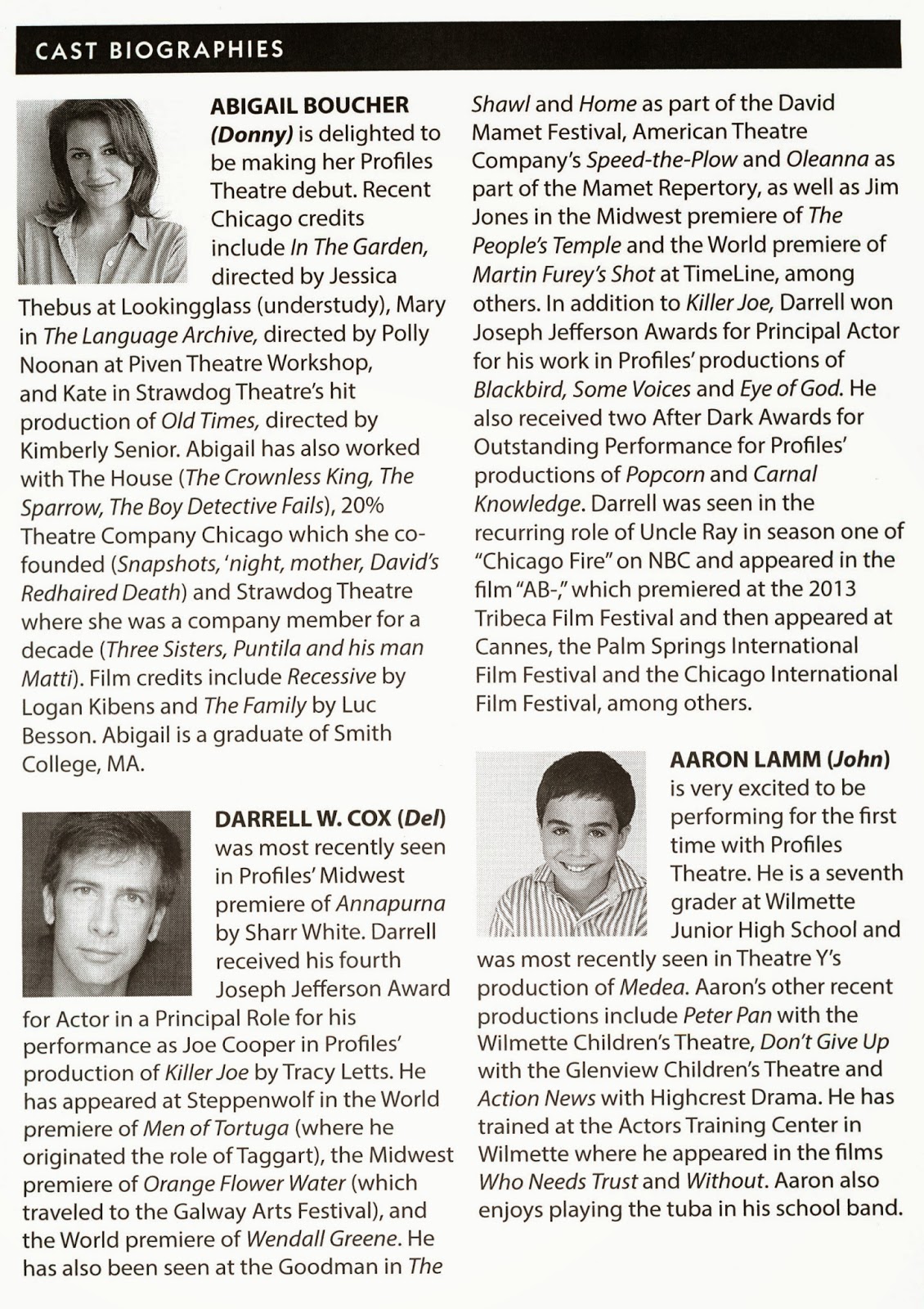 Alas, the script I think would be a better read, than the actual production because pretty much everyone was annoying- pretty much all the time... yes, it had the snappy talking-over-each-other typical of Mamet but the Del character was annoyingly sappy and cowardly (not to mention the lying) and the Donny character was annoyingly short tempered and manipulative of Del and the John character was the MOST annoying (at the same time as being perhaps the most sympathetic) - he simply REFUSED to stop interrupting the adults, who were in serious need of some adult discussion without his constant interruptions. (IN my father's house when it was bedtime, you didn't have to go to sleep, but you did have to STAY in bed, you could read or as we got older, listen to music at a low volume but you had to STAY in bed - clearly this kid did not live in my father's house, and his character was incredibly annoying to his mother and perhaps even more so to me...) 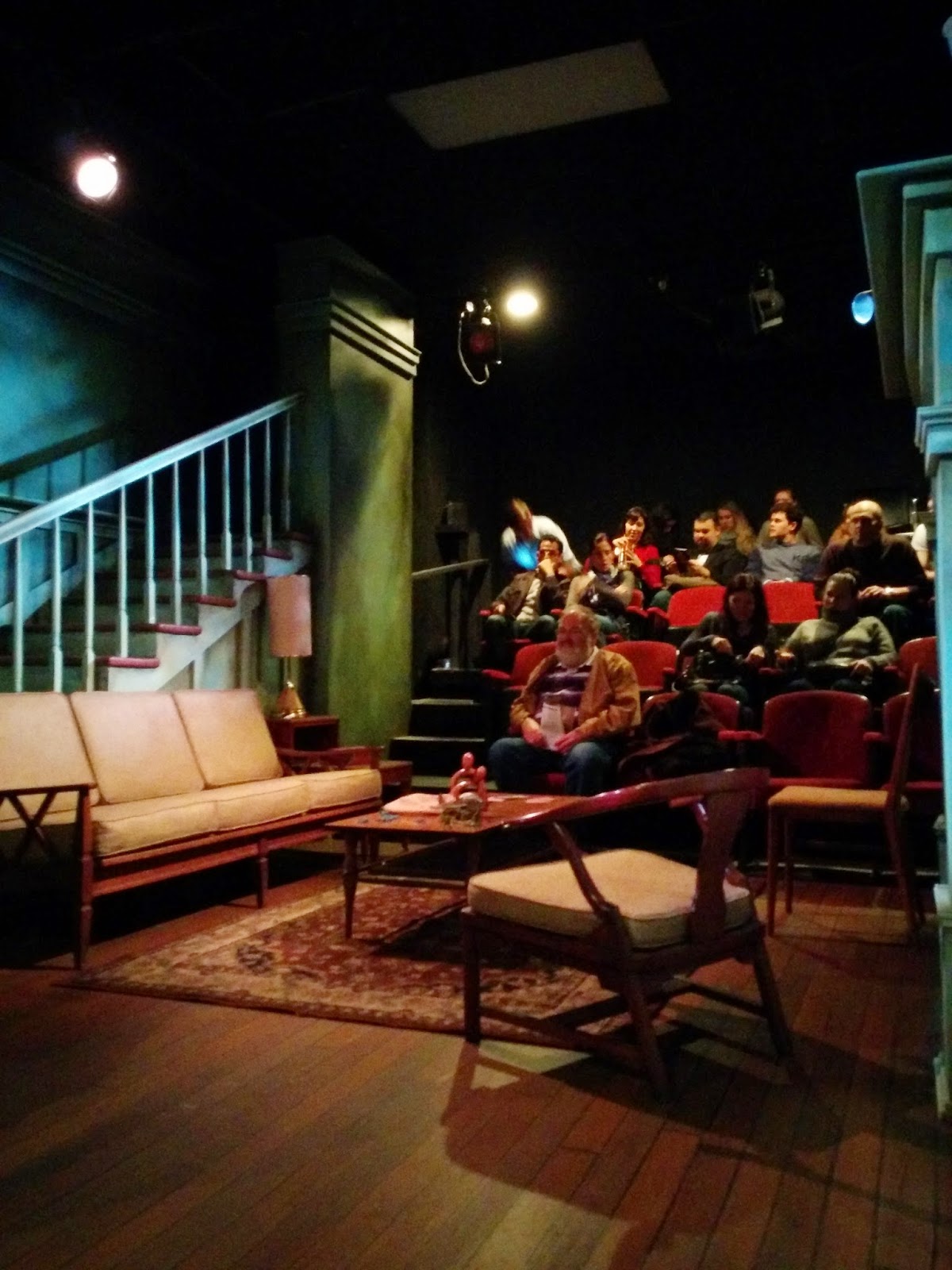 so overall I would say - skip this one - first and foremost because to me it was 90 minutes of annoyance, but to add to the reasons to skip it - the absolutely unprofessional practices of the company- seriously what do they do when it is 20* below- make people wait in the cold outside until 20 minutes before curtain time? and then, if the theater was going to be full there wouldn't even be enough room in the tiny lobby for all the folks to wait inside until the actual curtain time when they "opened the house" and ALLOWED you to go into the theater itself.  Really is there any reason to make people arrive on time when clearly you plan on starting 20 minutes AFTER curtain time? I think not... give this company a pass... Raven, Timeline, Lifeline, Remy Bumppo (all small off-loop theaters) can all provide more courtesy to their patrons than this place is apparently capable of giving....

And to completely change the subject-  and on another topic altogether-  I would like to note that on Monday, September 29th (the anniversary of my parent's first date in 1948- 66 years ago) my blog hit a milestone of 41,000 post views (still a bit more than three weeks short of the fourth anniversary of my first blog entry on 10/22/2010) ... thanks for stopping by yet again!
Posted by TOR at 1:35 AM No comments: