who knows where the time goes? LOL - something Phil and I say to each other all the time... on so many levels- this week was interesting because we went to a lecture by a futurist named David Houle.  We had heard him speak last spring and enjoyed hearing his perspective. So when we saw he was speaking on the media and public trust we signed up to hear him again. 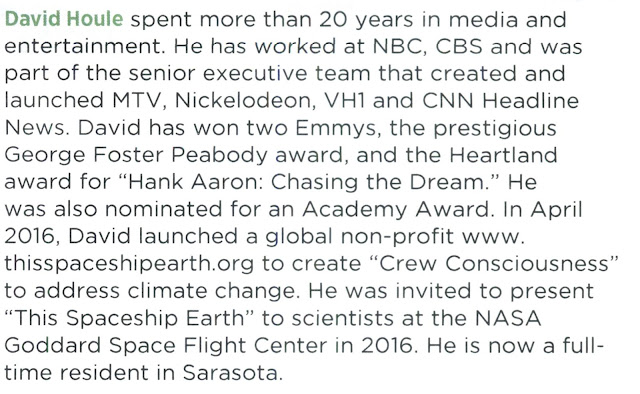 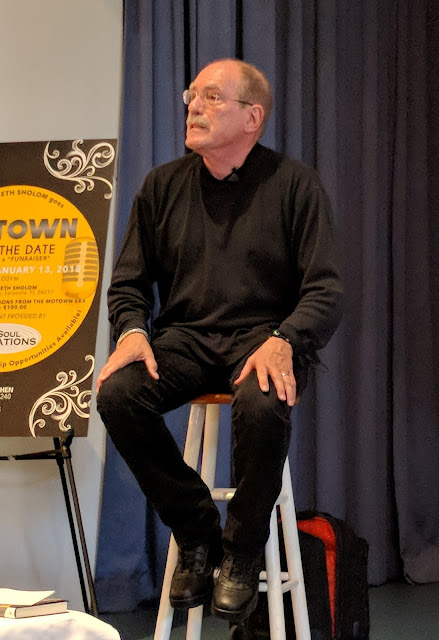 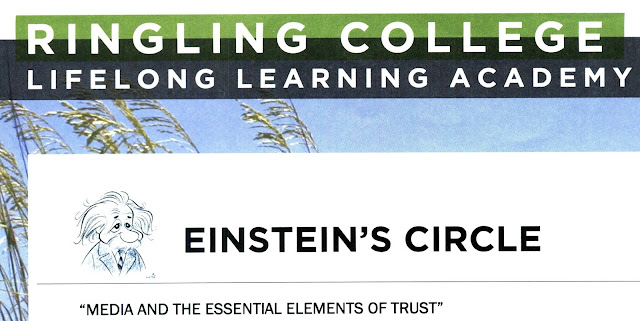 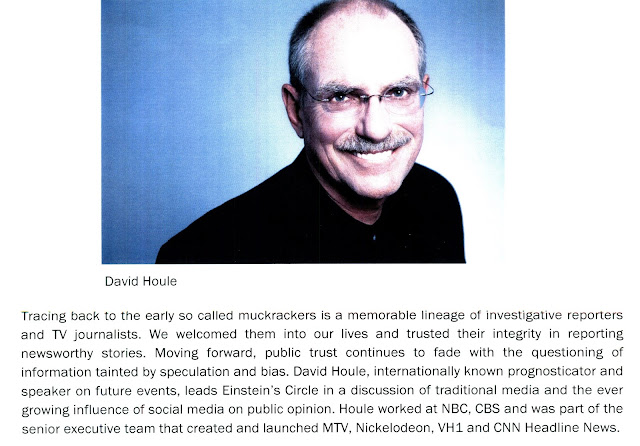 later that evening we went to one of our favorite places for dinner - the Blue Marlin on AMI - it's about 15 minutes from us and especially when we go (8 PM dinners aren't the most popular time here LOL) we generally have no traffic - of course parking in Bradenton Beach is always a challenge but this time of year it is less so. 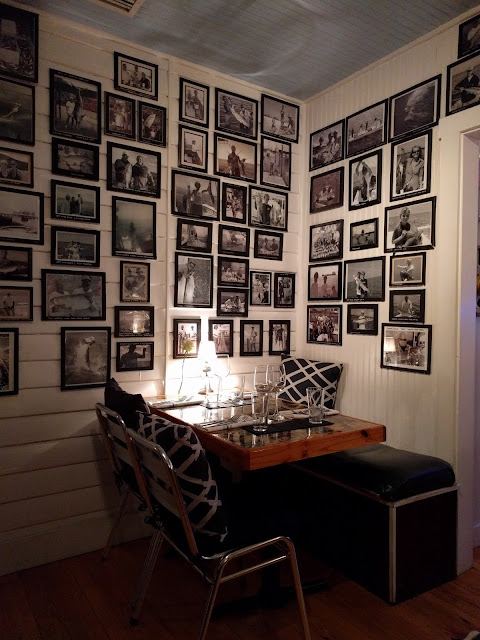 the menu of the day 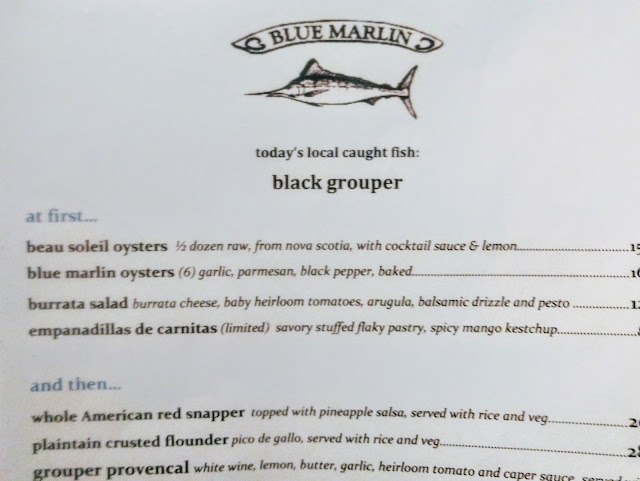 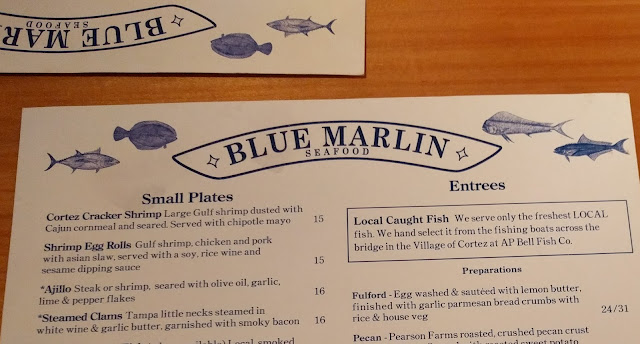 the white and red we settled on- after one not so great older white which I thought was flawed but Phil thought was just not so good---- is there really a difference? LOL 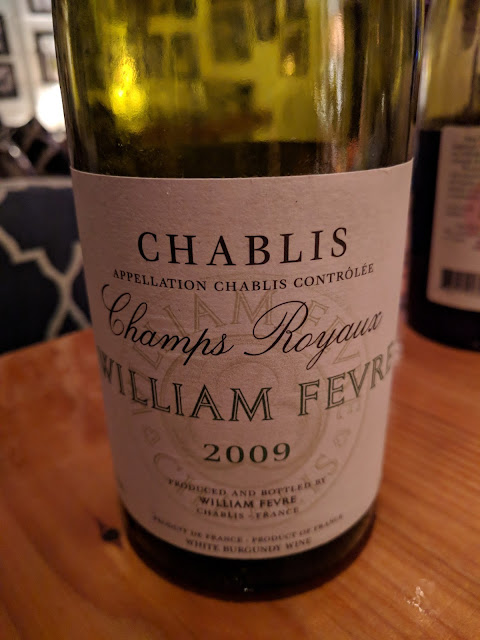 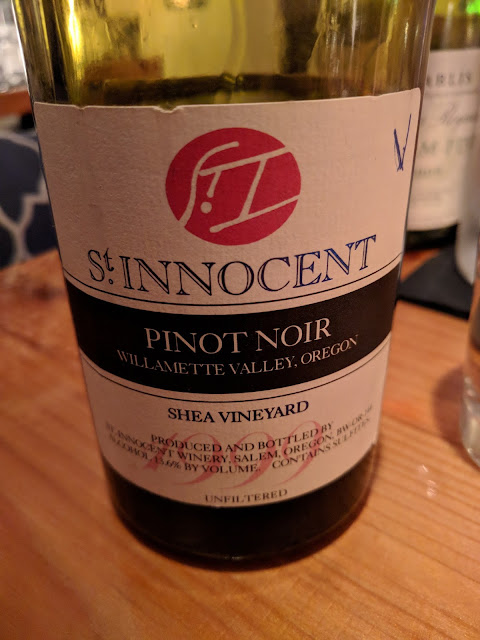 then last night we made our first trip to AMOB and on Sunday night we had made our first trip to Cafe Baci and last week we hit both Captain Brian's and Starfish and Bella Mia - LOL so we are well into the "welcome back" tour of Florida faves.....  next week is reasonably quiet - some guys coming to give us estimates for repairs of screening in our cage over the courtyard (Hurricane Irma damage) and shopping for an preparing for Thanksgiving.  Brother Larry is coming from Miami and Jean has made us one of her two stops that day. Larry will spend the weekend which will be great since we really haven't spent any time with him since last Christmas... the Hurricane disrupted plans he had to come to Chicago in September.... so stay tuned for more fun and games...
Posted by TOR at 10:07 AM No comments:

on Friday night we went to a terrific performance by a guy I had never heard of - David Olney...
a solo singer-songwriter, who has released more than 20 albums over four decades, including 6 live recordings.  His songs have been covered by and co-written with Emmylou Harris, Steve Earle, Johnny Cash, Linda Ronstadt, Steve Young, Del McCoury and Laurie Lewis, and others.

The late Townes Van Zandt was the best songwriter in the whole wide world, Steve Earle said in an oft-cited quote, “and I’ll stand on Bob Dylan’s coffee table in my cowboy boots and say that.” Seventeen years after Van Zandt’s death, the Americana artists who followed in his wake still speak of him the way rockers invoke John Lennon or Jimi Hendrix — as a standard bearer who represents a pinnacle of credibility and craft.  Had he been the coffee-table orating type, however, whose name would Van Zandt have declared?

“Anytime anyone asks me who my favorite music writers are, I say Mozart, Lightnin’ Hopkins, Bob Dylan, and Dave Olney,” Van Zandt wrote. “Dave Olney is one of the best songwriters I’ve ever heard — and that’s true. I mean that from my heart.” 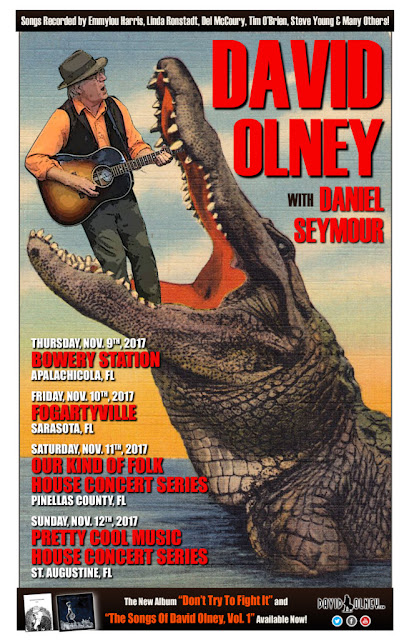 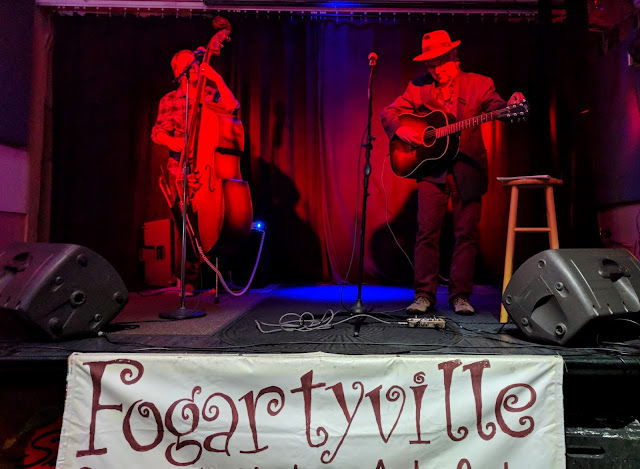 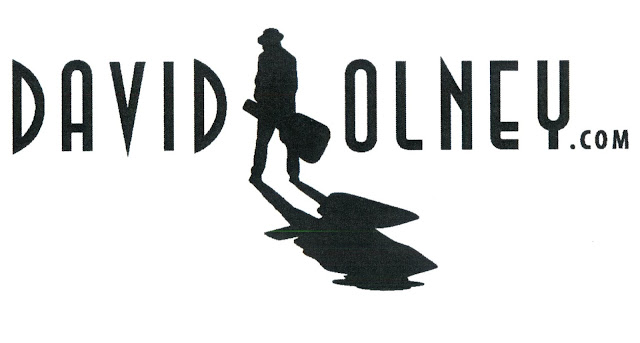 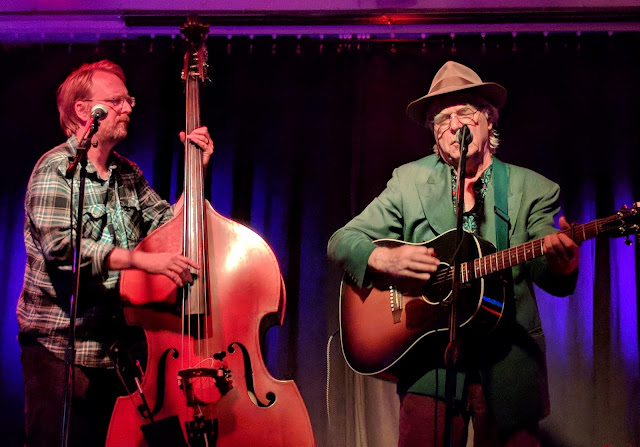 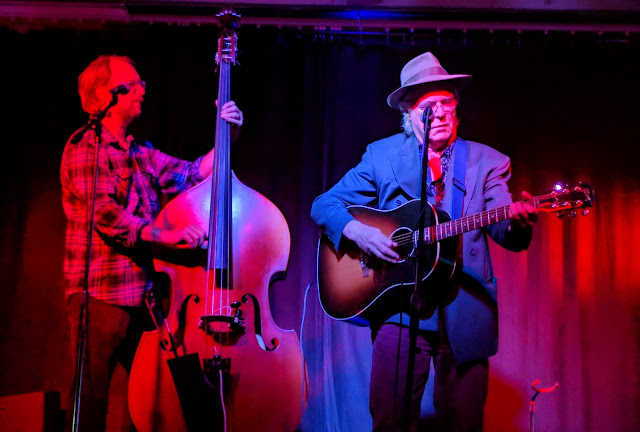 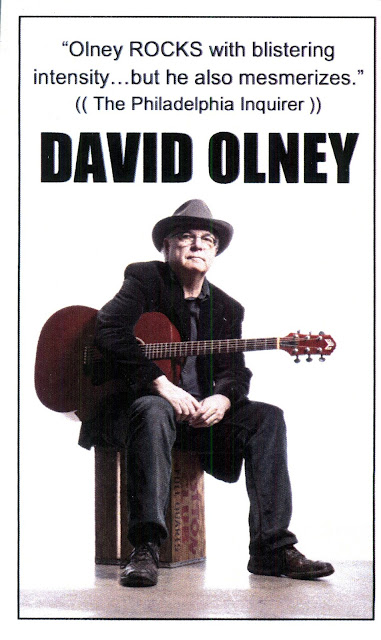 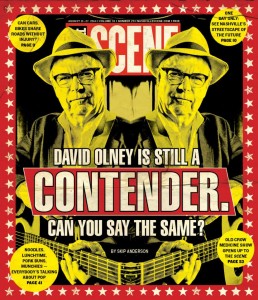 Then on Saturday we had the first of our season of the Sarasota Orchestra (music director Anu Tali) - located at the Van Wezel Auditorium... 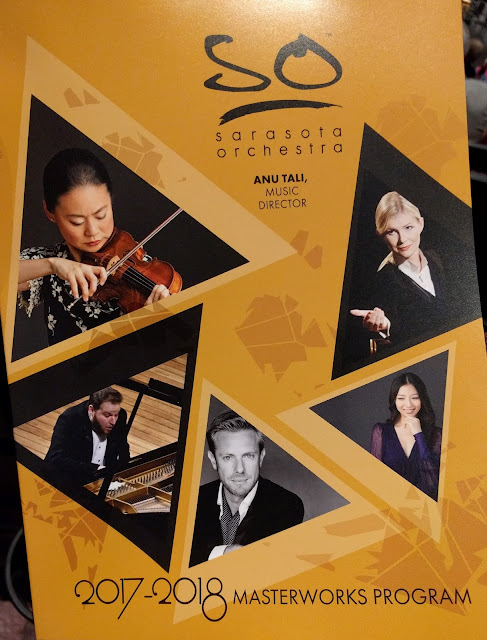 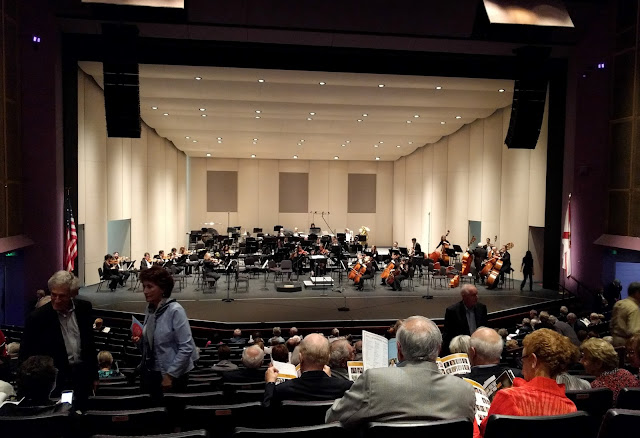 The first concert of the season launches with two works by the great masters: Dvořák and Mahler. Dvořák's Cello Concerto is the pinnacle of expression for the instrument most like the human voice. Exploring some of the cello's most expressive and beautiful qualities, Dvořák shows his compositional prowess in this piece performed by Spanish cellist Adolfo Gutiérrez Arenas. On hearing Mahler's Fifth Symphony, prepare to forget that time has passed. The symphony begins with a rhythmic motive reminiscent of Beethoven's Fifth Symphony. It progresses from tragedy to triumph in the stirring fifth movement.

the program notes are edifying-

Antonín Dvorák (1841 -1904)
When Antonin Dvořák came to New York City in 1892 to become director of the National Conservatory of Music, he became good friends with Victor Herbert, the school's cello professor, and worked with him on several projects and performances. Herbert later left the school to do more performing, conduct the Regimental Band of the New York National Guard, and finish composing his second Cello Concerto for the New York Philharmonic. Dvořák attended the work's premiere in 1894, and went backstage to congratulate his friend. Within a year, Dvořák had completed his own Cello Concerto in B Minor, Op. 104, beginning work in New York on November 8, 1894, and completing it three months later on February 9, 1895.
Friendly competition with Herbert may have spurred Dvořák to compose his cello concerto, but he wrote the piece with Czech cellist Hanus Wihan in mind. Upon returning home, Dvořák showed the work to Wihan, who was more than happy to help him refine the work. Wihan's rewrites were so extensive, in fact, that Dvořák wrote to his publishers, "The principal part with finger and bowing indications has been done by Professor Wihan." The composer later asserted his will more stridently, stating, "I will give you my work only if you promise not to allow anyone to make changes - friend Wihan not excepted - without my knowledge or consent." Another inspiration for the work was his sister-in-law, Josefina Kaunitzova, who was Dvořák's first love interest and possibly the great love of his life.
When Johannes Brahms first heard Dvořák's Cello Concerto, he exclaimed, "Why on earth didn't I know it was possible to write a cello concerto like this? If only I had known, I would have written one long ago!" Passion is evident from the start. After a lengthy orchestral introduction, the soloist enters - but with a statement that sounds like an introduction, or even a cadenza. When Dvořák was composing the Adagio that follows, he reportedly received a letter from Josefina in which she shared that her health was deteriorating. The stormy episode that erupts in the middle of the movement - and then gives way to a quotation from her favorite of his songs (Leave me alone in my fond dream) - is often said to mirror his reaction to the news. After completing the energetic rondo with which the concerto ends, Dvořák returned home - and shortly thereafter, Josefina passed away. Just before the concerto's end, Dvořák inserted a short, exquisitely lyrical passage in memoriam, quoting her favorite song once again in the violin.

SYMPHONY NO. 5 IN C-SHARP MINOR

Gustav Mahler (1860 - 1911)
Born in 1860 in Bohemia, Gustav Mahler knew from an early age that he wanted to be a musician, and he pursued his vocation with a vengeance. After graduating in 1878 from the Vienna Conservatory, Mahler became a well-respected conductor, securing the position of director of the Vienna Court Opera in 1897. Despite the fact that he battled anti-Semitism throughout his career, Mahler was widely acknowledged as one of the greatest opera conductors of his time, and towards the end of his life became director of the Metropolitan Opera and the New York Philharmonic. He was also a brilliant composer, but his output was limited by necessity; he was forced to compose in the margins of his conducting career. The Fifth Symphony, for example, was written during the summers of 1901 and 1902. The work coincides with another turning point in Mahler's life—his engagement to the endlessly fascinating and somewhat maligned Alma Schindler. Some interpret the Fifth Symphony, which follows a path from mourning to triumph, as directly related to this milestone in the composer's life.
About his Fifth Symphony, Gustav Mahler wrote, "Heavens, what is the public going to make of this chaos in which new worlds are forever being engendered, only to crumble into ruin the next moment? What are they to say to this primeval music, this foaming, roaring, raging sea of sound, to these dancing stars, to these breathtaking, iridescent, flashing breakers?" While Mahler was composing this work in 1901-02 and at its premiere in 1904, there was a sense that he was doing something wholly new—and there is indeed a sense of departure in the Symphony No. 5. Mahler's first four symphonies each bear some connection to song: the first incorporates long excerpts from his Songs for a Wayfarer, and his second, third, and fourth symphonies all feature vocal music. Before writing his fifth, however, Mahler encountered the complete works of Bach, renewing his interest in virtuosic orchestral writing for its own sake. Mahler even connected Bach's music to this symphony; the only time he conducted the work in Vienna, he preceded it with Bach's motet Singet dem Herrn ein neues Lied (Sing to the Lord a New Song). In abandoning vocal music in the context of a symphonic work, in pursuing orchestral virtuosity as an end unto itself, Mahler was in essence "singing a new song."
Mahler may have been hearkening back both to Bach and to the concept of "absolute music" popular in the nineteenth century—"Perish the program!" he cried in one famous outburst—but it is difficult not to hear a story in the Fifth Symphony, whether or not one existed. Written in five movements, Mahler wrote large Roman numerals in the score that essentially divide the work into three parts: the first two movements, the third movement, and the last two movements. The funeral music with which the symphony begins sets the tone for the first section, which is generally negative in tone. The Scherzo, which comprises Part II, is quixotic in mood. Part III, with the famous Adagietto, is said to convey the depths of his love for Alma Schindler, while the symphony culminates in the jubilant Finale. Throughout the work, Mahler makes many thematic connections, constructing a formal musical framework that ironically cries out for the kind of poetic analysis he claimed to want to avoid.
Program notes are written by Jennifer Glagov. jmglagov@gmail.com 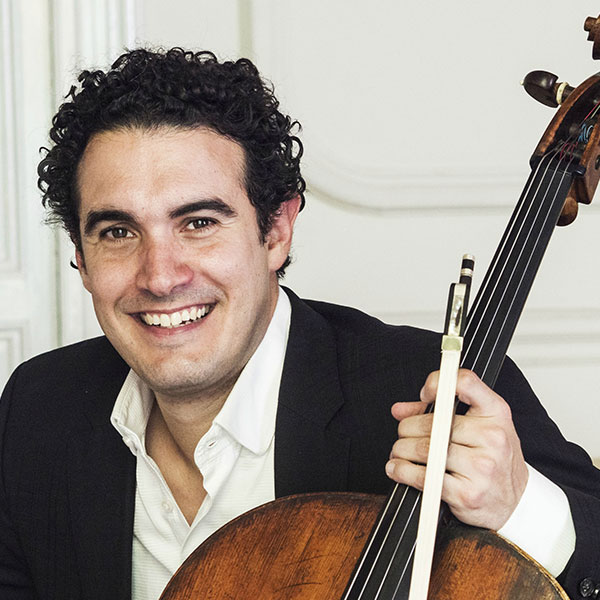 The Dvorak was wonderful - the Mahler was loud and extremely long I don't know how the orchestra did it- they played basically for two solid hours with only the fifteen minute break in between the pieces...

so off with a running start with music from various locations on the spectrum- both completely enjoyable evenings-
Posted by TOR at 9:59 AM 1 comment: