loss in our lives.  my dear friend Brad, who has been my loving friend since June 1983 is in hospice care.  it is very likely he will not see his 50th birthday in late June.  I can't begin to enumerate how important Brad was in helping me through times of difficulty and in celebrating times of joy.  even when we weren't together -we were.

we spent a lot of time together for a decade or so and of course life took us on paths that diverged - mine to career things and his to family things.  he married and had two children and I traveled all over the world but the connection between us was strong and never broken. 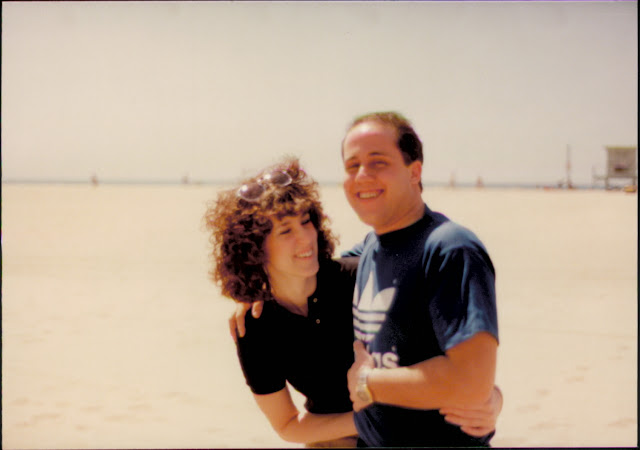 we met in June 1983 when I was dating a high shcool friend of Brad's - I was recently separated from my first husband and going through a fair amount of emotional trauma.  Brad seemed older than his years and had a peacefulness and calmness that was different from his peers.  he had been living in California but was returning to Chicago to start up a business.
the above photo is taken in March 1984 on Venice Beach.  Darren and I were out there on vacation and Brad joined us.  at that time Brad - when asked the question "are you dating anyone?" ﻿would answer "yes, I am dating Darren and Vicki."  later when Darren and I broke up I got Brad "in the divorce" and we stayed dear friends. 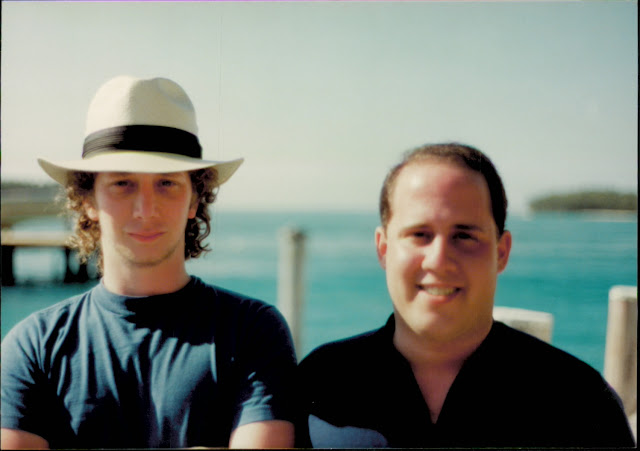 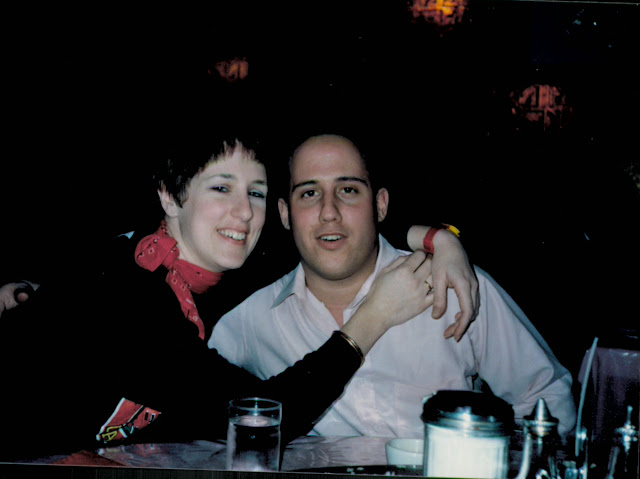 a birthday dinner at Charlie Lui's with friends February 1986 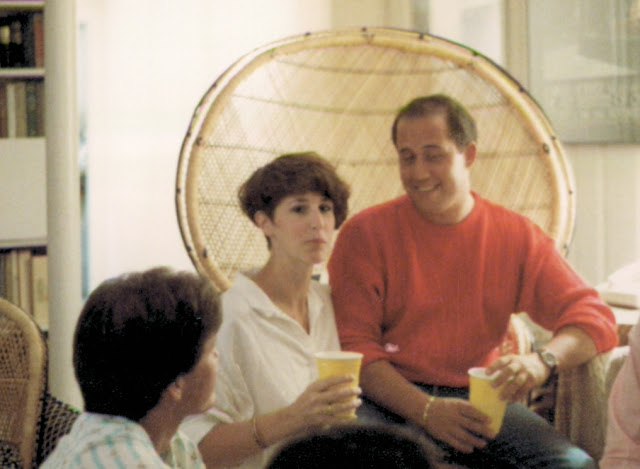 a party at my place to celebrate Brad's acceptance into facilitator training in 1986.
I would follow in hs footsteps two years later. 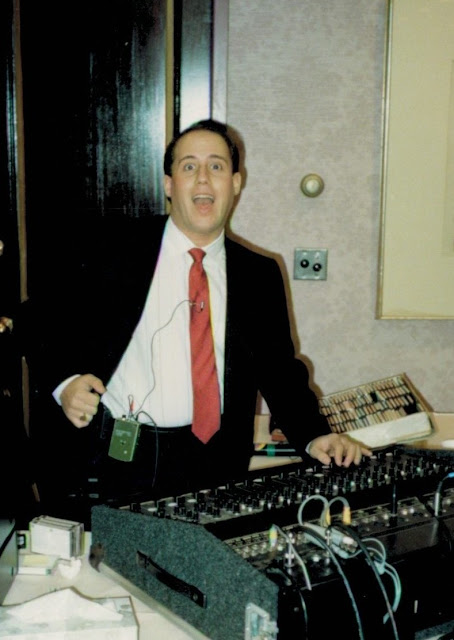 at the sound board in a seminar - Brad was the one who trained me to do this work
and that gave me some travel opportunities I wouldn't have had otherwise. 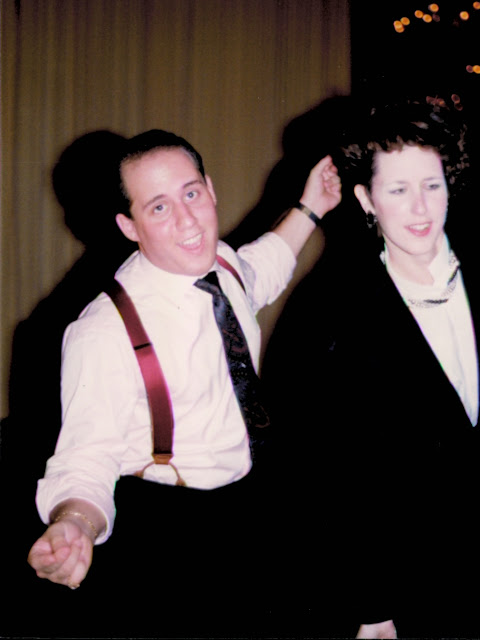 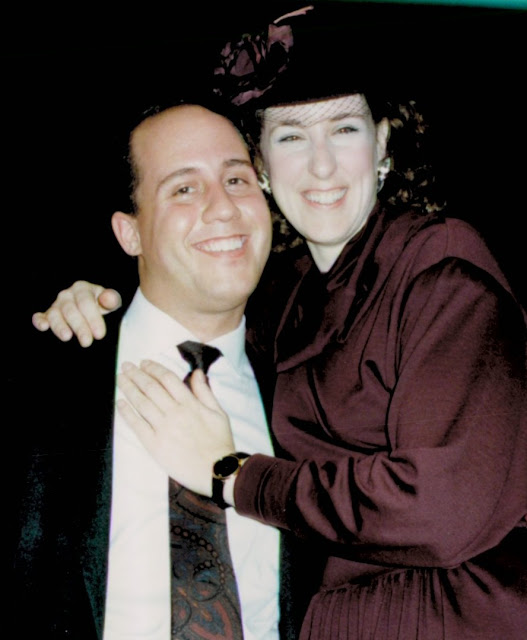 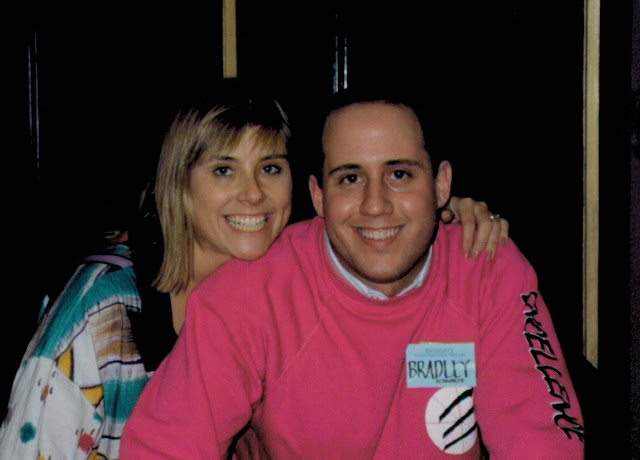 Brad and Anne Trompeter-Bodine at a seminar 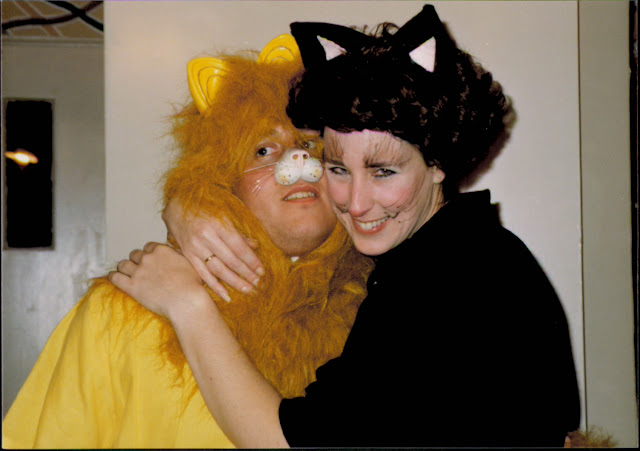 At a Halloween party in the late 80s (two cats!) 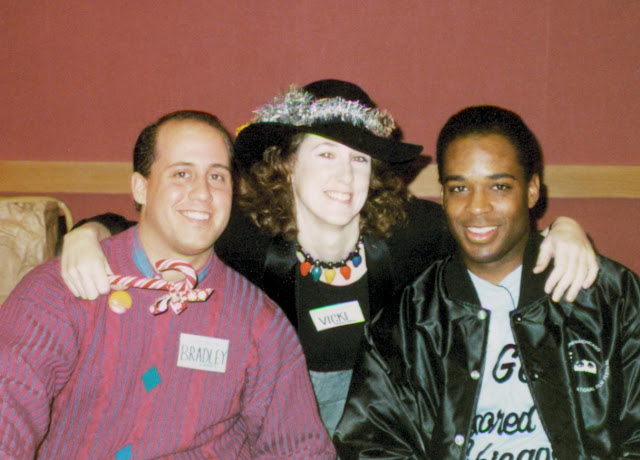 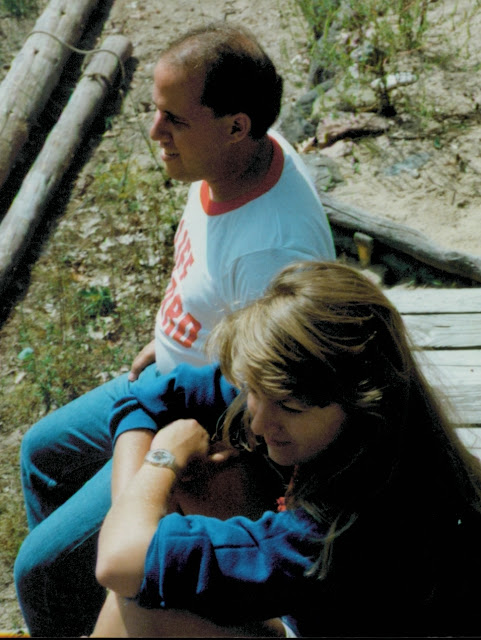 with Dorothy Zwiazek, Brad's long term girlfriend in that era- away for a weekend in Wisconsin with friends 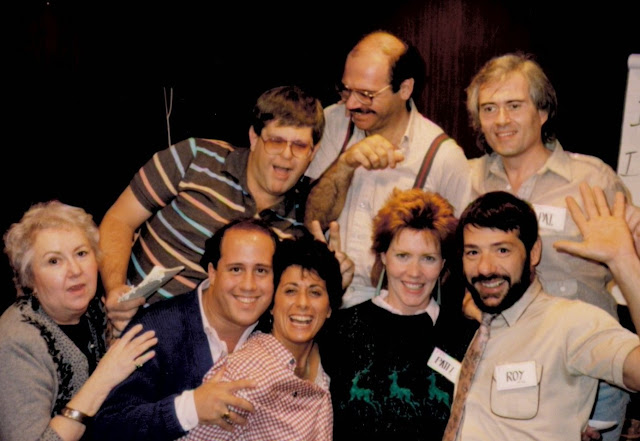 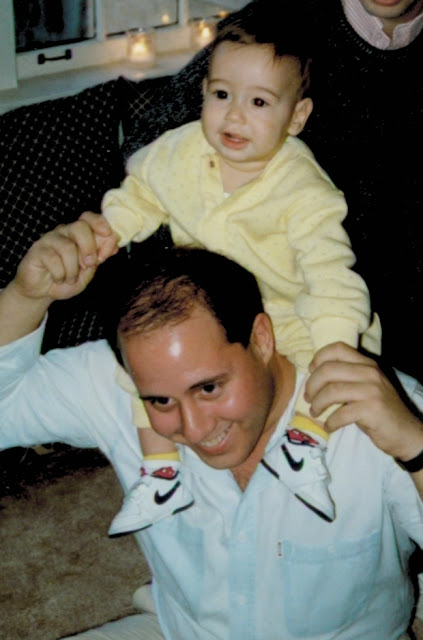 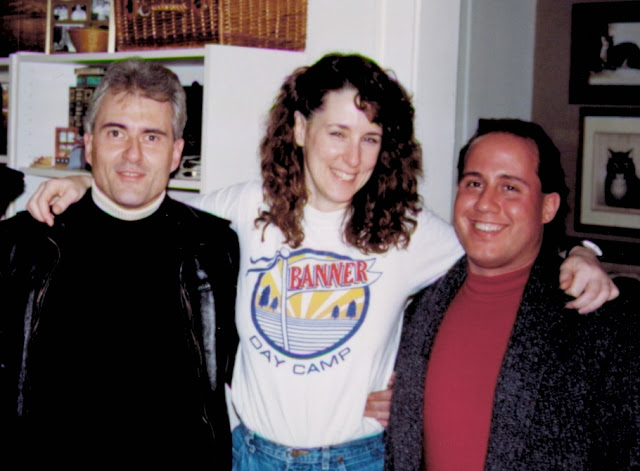 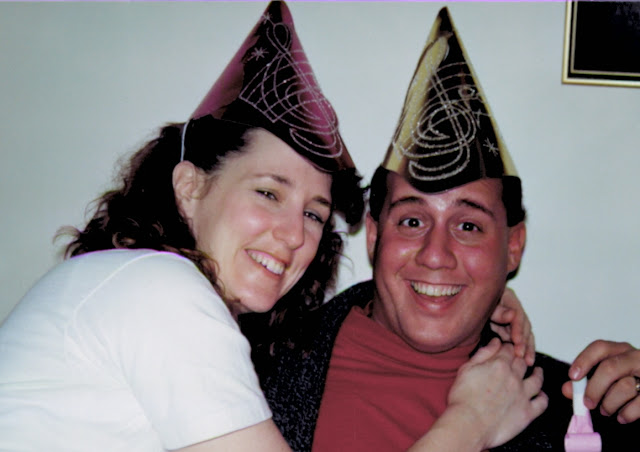 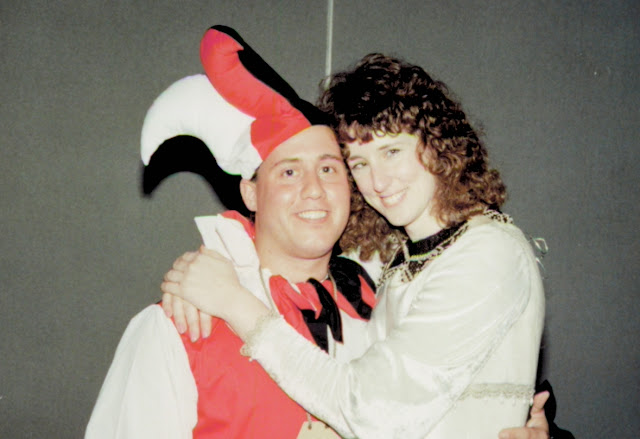 in Chicago -a celebration at the end of the nine week
Leadership Training: Demonstrating Excellence 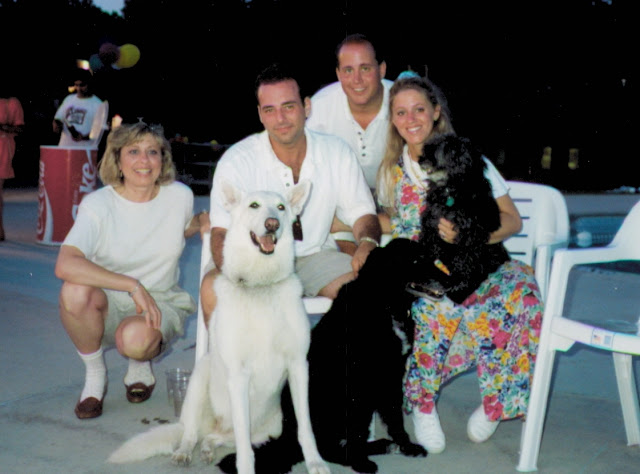 Brad's 30th birthday party June 1991
from the left Helen Schwartz (Brad's mom) - Paul and Stacy Kotelov (Brad's sister and her husband) and below Chelsea and Kippy - Brad's beloved doggies. (Stacy's dog on her lap but I don't recall its name.) 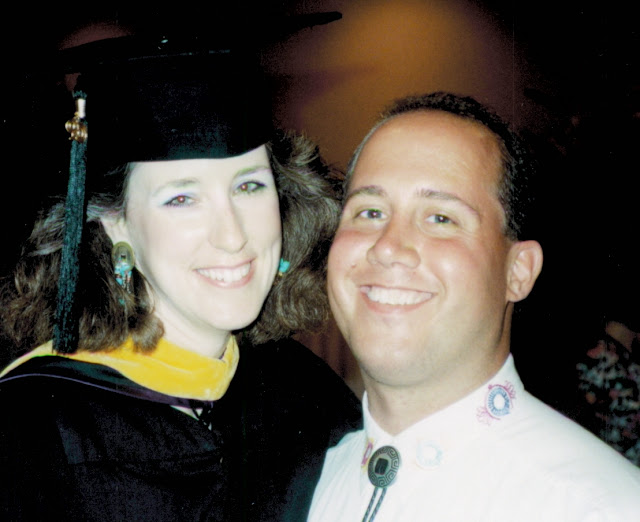 a photo from graduation when I got my Master's Degree in Applied Psychology
from the University of Santa Monica.
﻿a mutual friend inquired yesterday on how I was doing, haivng heard the news of  Brad entering the final stages of hospice care and here is what I answered:
I knew he was ill and fighting it but I hadn't heard from him in a while and given the odds figured it wasn't good-
he has been my loving friend since June 1983 when we met- I actually can hardly think of anyone more capable of dealing with such a situation from the 90% level-
when he is released into spirit he will just be more truly himself- and our loving will stand as it always has - of course there are tears but I KNOW he will always be a part of me- we supported each other through some of the roughest times in our earlier lives and I am honored to have called him my friend.
Love Always Brad- your friend TOR (and by the way- he was the one who gave me that nickname)

Posted by TOR at 12:01 PM No comments: Links to this post

yesterday afternoon I watched this video upon the recommendation of my husband.  and then posted it to my facebook page because I was so galvanized by what Goldie Taylor had to say... the video is embedded in some text so scroll down until you get there---


last night I woke around 3 AM and couldn't get back to sleep thinking about the whole Obama thing.  this post may sound disjointed but bear with me.  some people (my husband's children for instance) would call me conservative and some (the vast majority of my doctor friends) liberal.  I bought my last three cars with cash I saved for their purchase.  but I still remember that May 4th is a day with meaning (1970 - four students killed by OUR government in Kent Ohio)

I would call myself liberal and here is why - I have been dissing President Obama for not doing enough... I cast my vote for him because I remember the lyrics to "Chicago"

those words were written about the 1968 Democratic Convention in Chicago and became a hit song from Crosby Stills Nash & Young.  when President Obama was elected, I still believed we could elect someone who could make a difference - create more equality and end years of injustice for not just black people but for women and for immigrants and for the unemployed seeking work and for the working poor and for the aged... yeah - all those bleeding heart liberal causes.

on Saturday I finished reading a memoir by Paule Marshall called Triangular Road.  she grew up in and participated in the civil rights movement in the 60s.  the book described her personal thoughts related to the history of "chattel cargo" on the triangular route from Africa to the West Indies to the American South. (the slave trade)

I wanted him to enlarge Medicare for those 55 and older and then in five years for those 45 and older and then in five more years for those 35 and older and eventually we would have a single payer system.  I wanted him to be tougher on the thieves who created a bizarre scheme of selling securtized mortgages such that the banks who lent the money had no skin in the game.   and I wanted him to let the Bush tax cuts expire (thereby ending up paying more tax personally)  I wanted us out of other people's business in the middle east - Iran and Afghanistan and I was angry when two weeks before I was to leave for Tunisia he started bombing Libya.  could the man not do anything right? why didn't he stand up to those wing nuts on the right in the tea party?

but last night I had decided after watching the video that I was going to support him despite his "vast failings" because in my opinion, we need to get past the point where it is  acceptable to ask the president of the US for "his papers."

so I came downstairs because I wasn't sleeping and because we had Asian food for dinner and I was hungry.  I was making toast when Phil came up from the lower level and asked me if I saw his note.  he said did I know the news? Osama bin Laden was dead - killed by special forces- while "hiding" (more like hidden by the Pakistanis) in the Pakistan capital suburbs in a large compound.   then he started to tear up when he told me that there had been crowds gathering at the World Trade Center.

For nearly ten years I haven't really been able to address the topic- I won't listen to songs about it that Phil is always trying convince me to hear. I am still overwhelmed by emotions when I think of the firefighters going up the stairs in the Twin Towers as everyone else was exiting...

so what, you may be asking, is the point of this diatribe so unlike the remainder of semifreelife? I guess it is that I am going to try my best to give the guy a bit of slack given the environment that he finds himself in.

I hope and pray there is still time in our lifetime to create a better world.
Posted by TOR at 9:42 AM 1 comment: Links to this post