so - as you may remember - we have season tickets to a couple of local theaters and last night was the night we were scheduled to see The Odd Couple at Northlight. 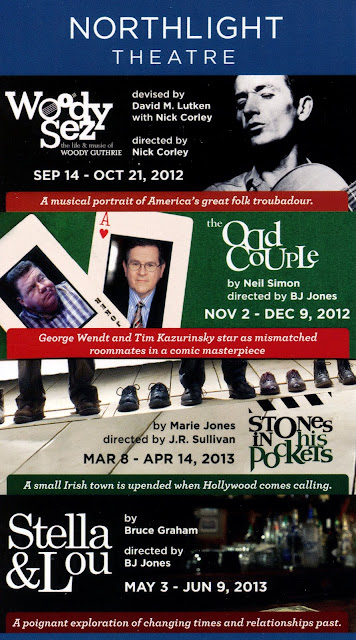 The big hype was George Wendt was back at Northlight for the first time since doing Rounding Third with one of the Arkins here a couple of years back.  He was paired with an old Second City buddy the multi faceted and multi talented Tim Kazurinsky as Oscar and Felix respectively. 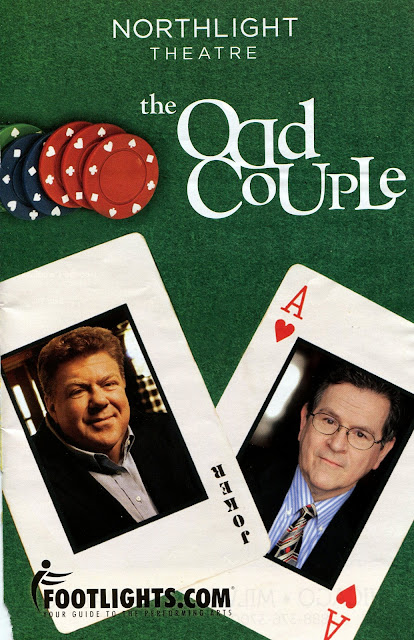 then Wendt went... we got a call a week or so ago saying he was indisposed and would be replaced.  turns out the guy who replaced him was actually born to play Fred Flintstone (he was a dead ringer- same shaped head- same haircut etc...) 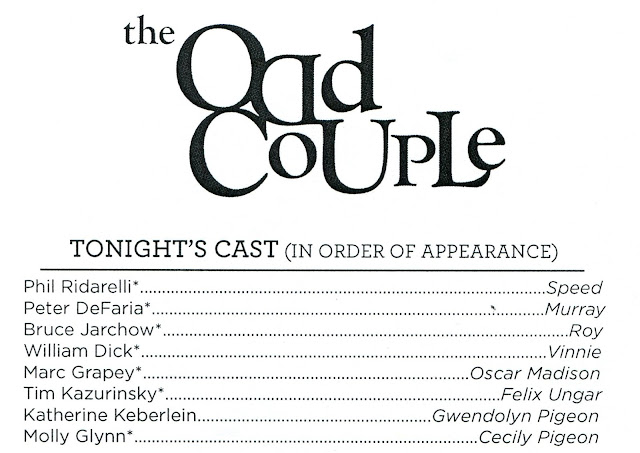 anyway- here is my review:

the cast was great - I would say Tim Kazurinsky was born to play Felix Ungar but that isn't true- he is just such a superb actor that it seemed like he WAS Felix Ungar.  the guys who played the poker players were all "old pros" in the best sense of the phrase.

the play is somewhat showing its age- while still funny, it doesn't have the edge it once did when a fussy Felix would have been much more of an outrageous character than the broad spectrum of acceptable behavior we find "normal" today.

the pigeon sisters were dopey and anachronistic... might have been funny fifty years ago - today not so much....

all in all a workman-like production, but more- a serious reminder about how much really EXCELLENT theater we see in Chicago that is much more thought provoking and cutting edge than a old stalwart nearing 50.

and I don't think that the fact that Wendt went - and was replaced did it any harm, as the flaws were material related versus player related...

If the Big Knife is still playing at the Raven go see it.  Despite its age (the Odets play is much older- 1949- than the Simon -1965) it still has the thought provoking edge it had "back in the day"
Posted by TOR at 12:39 PM No comments:

the two bottles of wine

really helped us with perspective on our meal last night at Cyrano's Farm Kitchen.  the Chicago Gourmets event was scheduled to celebrate the Beaujolais Nouveau release.  Beaujolais Nouveau has all but ruined the reputation of Beaujolais as a wine region in France- Beaujolais Nouveau -in my opinion can only be summarized as crap. no one in their right mind would want to drink it but somehow the marketing people have managed to make the release of horrible wine an "event" so the rest of Beaujolais suffers...

but enough time on my soap box with that because Chicago Gourmet also knows this and scheduled this dinner as a BYO- so off we went because as many of you know BYO is pretty much our mantra...

cut to the chase on the wine- and we will get back to the food later- here is what we brought - a 1996 Bourgogne Cuvee Unique from Arlaud that was showing very very well and a 2004 St Aubin Les Frionnes from Lamy that also was a perfect pairing for the soup and fish courses. 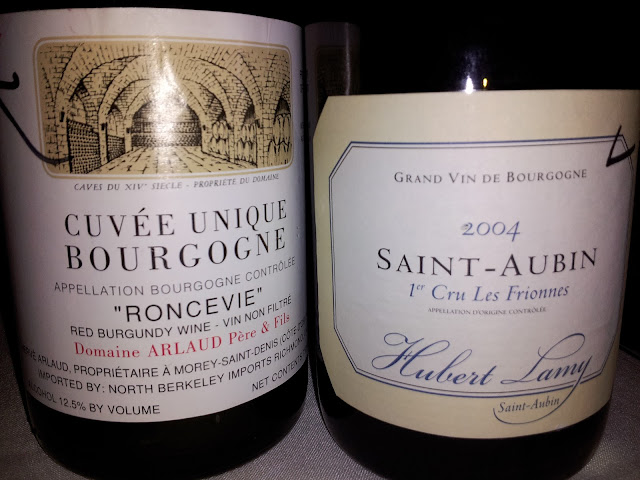 we had opened and tasted these bottles at home so as to not have to bring back ups (especially for the 1996)- and thank god we did because a corkscrew was difficult to find - but back to the time line...

we arrived just past the six o'clock hour (these CG events are always ungodly early- we chalk it up to the age of the participants - or perhaps it is a relic of when everyone worked in the loop and wanted to eat before heading home) and there were about four people there.  one was the host, who seemed "confused"-there were no place cards so we sat ourselves in a place where Phil could have a "lefty" seat. There were also no menus (luckily I had brought my flyer with me and could follow along) and no flowers (Don Newcomb- our flower-meister was in Atlanta having Thanksgiving holiday with Elton John and David Furnish and their adorable toddler)

somehow we soldiered on- LOL- actually we started drinking- opened the stopper on the white and had our own little tete-a-tete at our end of the table.  the owner's wife Jamie came over and introduced herself - lovely woman.   The confused host told her that his wife and mother in law had left and would not be joining the small group- which has now grown to ten (table was set for fourteen).  When Jamie inquired why, he told her they had left when he had ordered a glass of wine from the bar.  I commented that this action seemed a little harsh for a glass of wine - and he responded that he was not supposed to drink because he was in AA. Guess he forgot to call his sponsor because I am guessing he had more than one glass from the way the evening went. 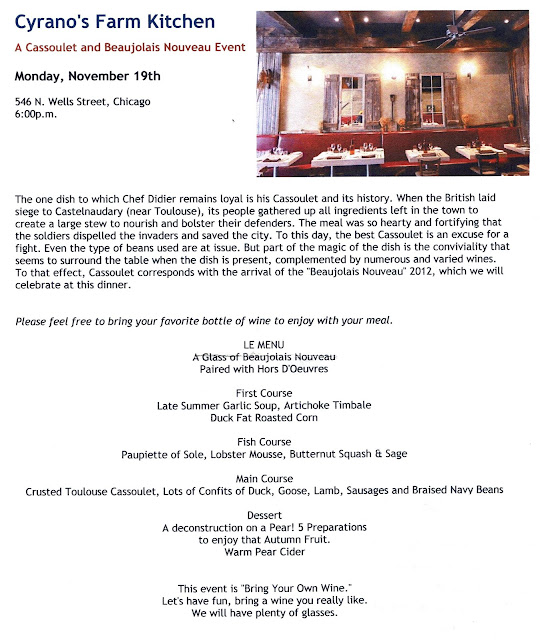 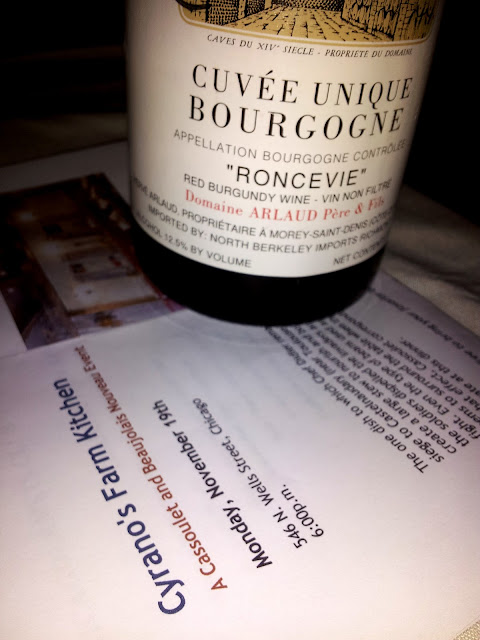 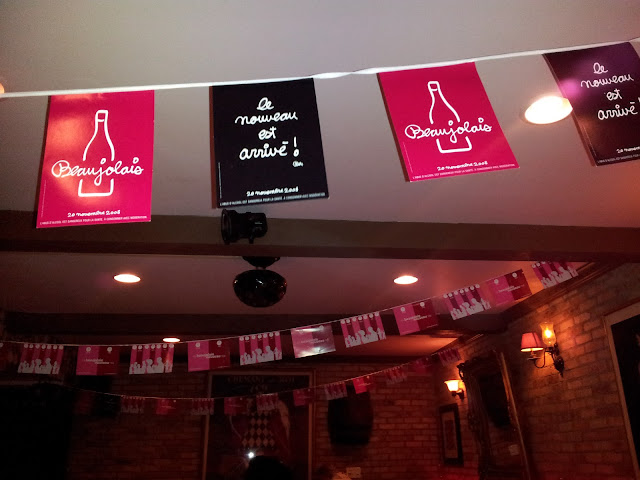 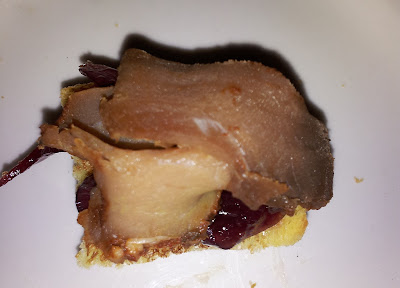 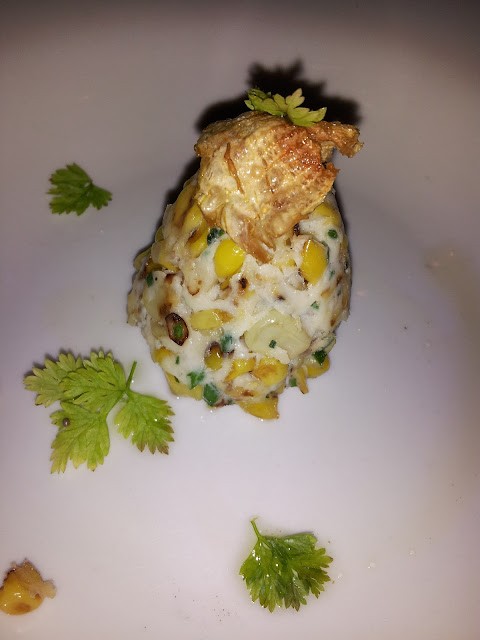 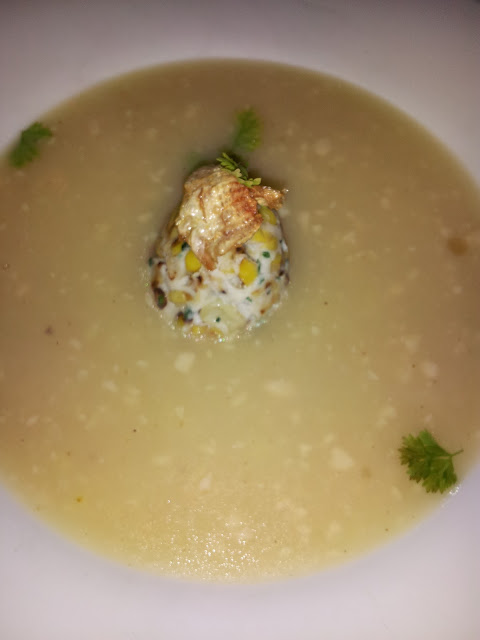 we had the white with this course and the next the lobster mousse/fish course- which was also first rate! 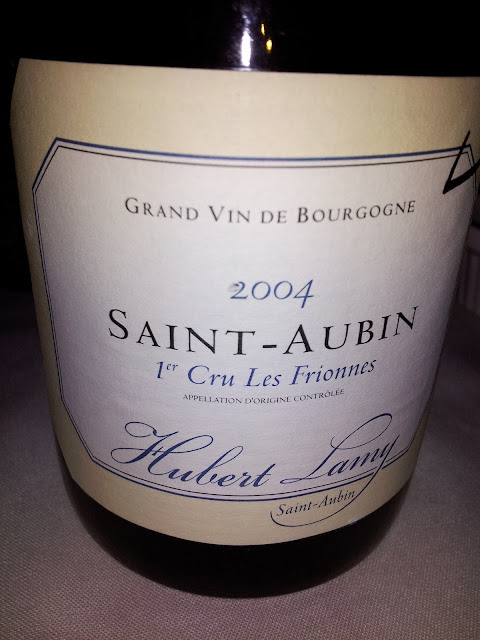 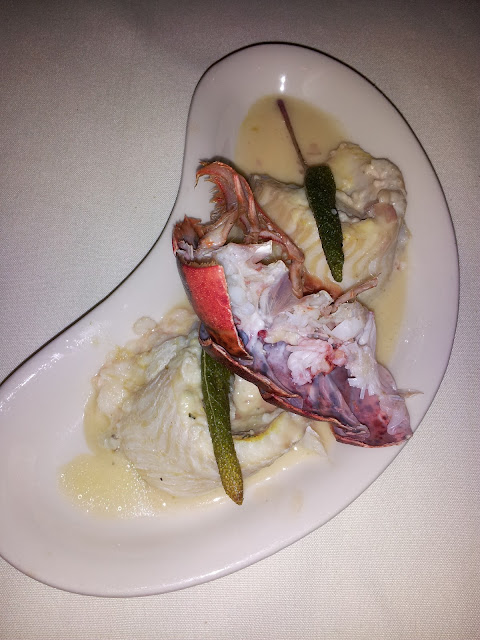 then on to the centerpiece of the evening the cassoulet- 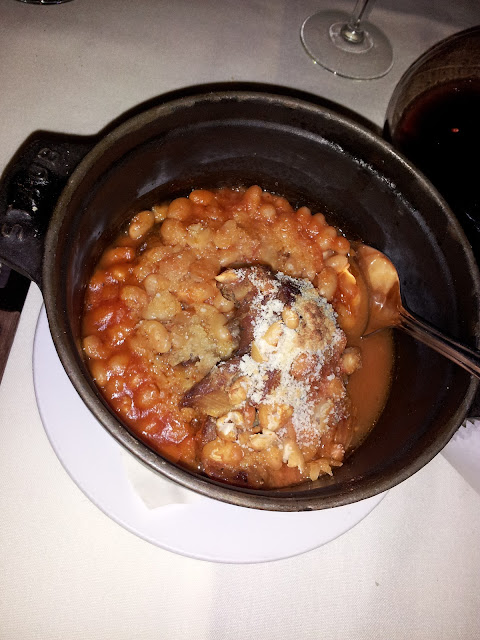 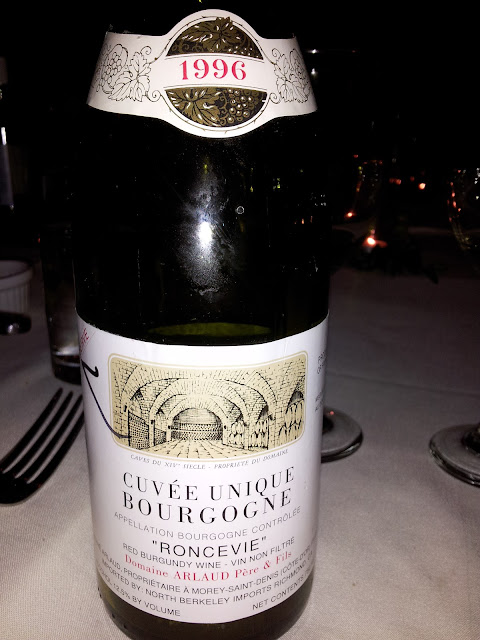 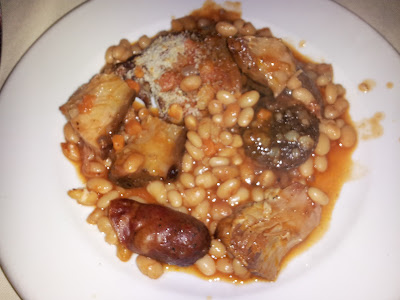 we were then served a surprise extra desert - an opera cake which I found yummy and would definitely order again if when we return there - and it was followed by the planned dessert of the pear five ways- sorbet, dried slice, mousse and poached along with a glass of warm pear cider. 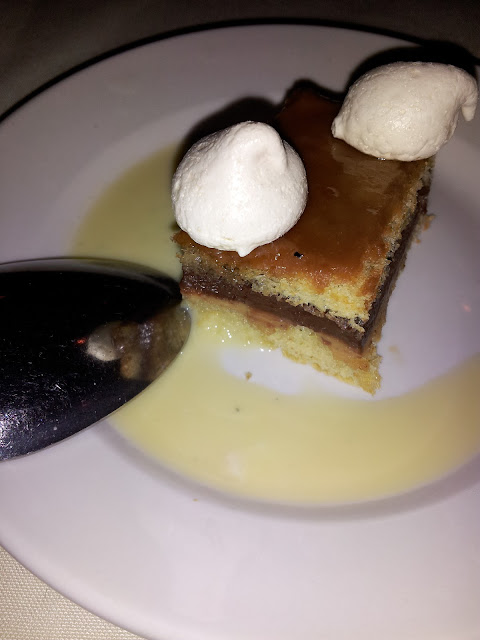 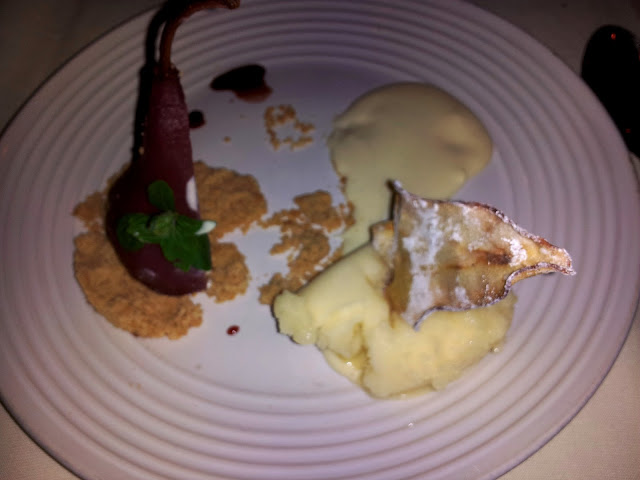 I hadn't actually touched the dessert- it had a little accident on the way to my place at the table- and my dried slice fell over and things slid...LOL - like the host who was by this time nodding off in his chair- he woke up and got up and went toward the exit but stopped about half way across the room and just stood there for a while (not ages but enough that it was noticeable) I thought he was headed toward the bathroom but he went the other direction towards the stairs and then came back quite quickly-- I wasn't sure what was going on but he didn't seem to be either- 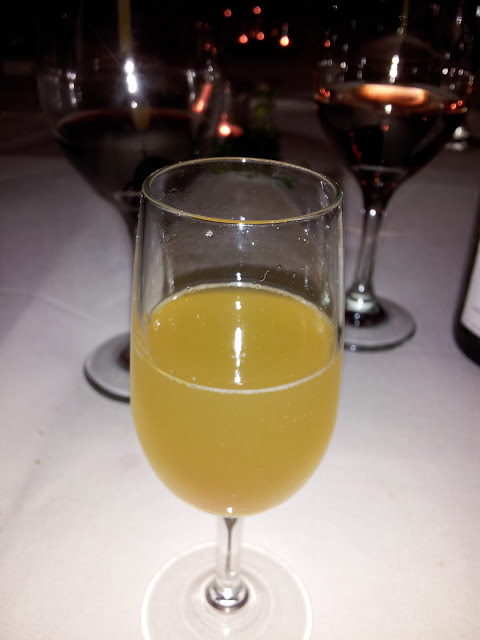 the chef came to join us at the end of the meal and he was delightful- ﻿he was happy to share a glass of wine and gave us information about the restaurant and his prepared foods (rillettes of goose duck and pork) - meanwhile the host put on his coat and left after a short speech about the BYO thing being an experiment... oh well- hope he found a cab after his wife and mother in law took the car home and abandoned him.

meanwhile I forgot to mention the most hilarious thing of the evening- when the final ten participants were seated we ended up with two empty seats in the middle of the table - effectively giving us our own dinner but for Jacques - our dining companion - and boy was he a HOOT!- the guy had the thickest French accent I have ever heard- remember our best couple friends are both from France (Paris and Provence) so it isn't like we don't usually hear their slant on our language- LOL- but this guy was the French equivalent of the Swedish chef.... I spent most of the evening laughing- of course the two bottles of excellent wine and the very very good food did keep us upbeat.

all in all we left saying to each other that we liked the place well enough to go back after we get home in April - liked Jamie and Chef Didier very much and that it was the strangest CG dinner we had ever attended.  Phil told me to make a note and if we ever see the host's name on an event in the future think long and hard about whether we want to attend... LOL- I just laughed- I took a few photos of the place on the way out and as we got almost to our car the chef was calling out to us- he wanted to give us his card and more written information about his products... nice guy.  And it was a fun - if weird -evening. 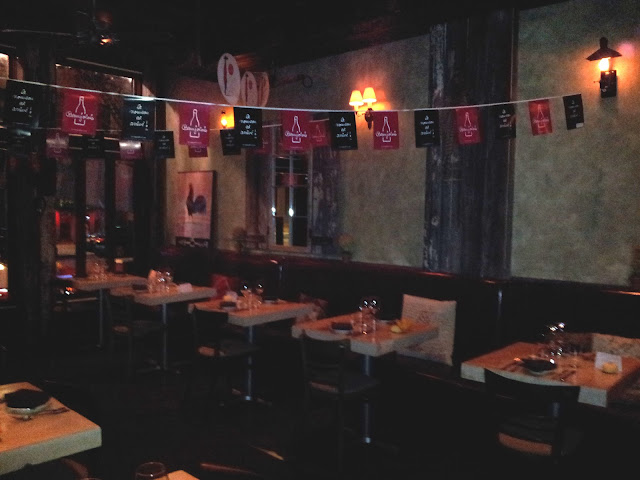 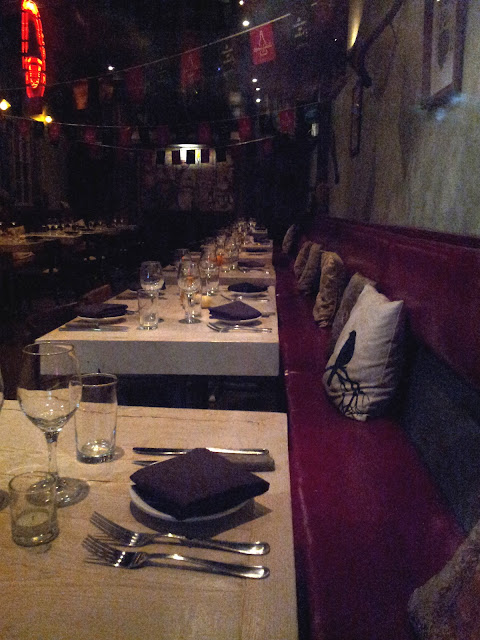 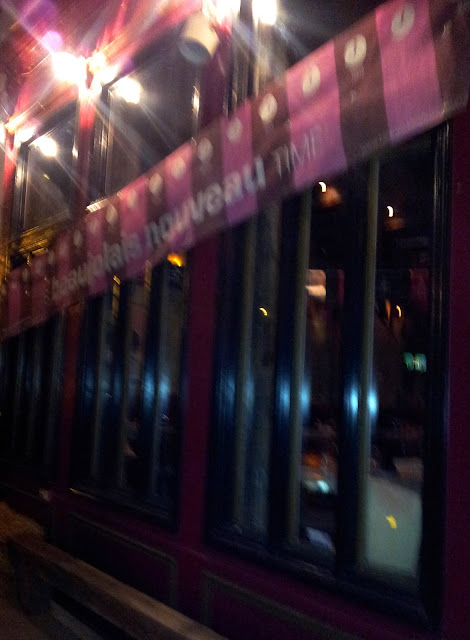 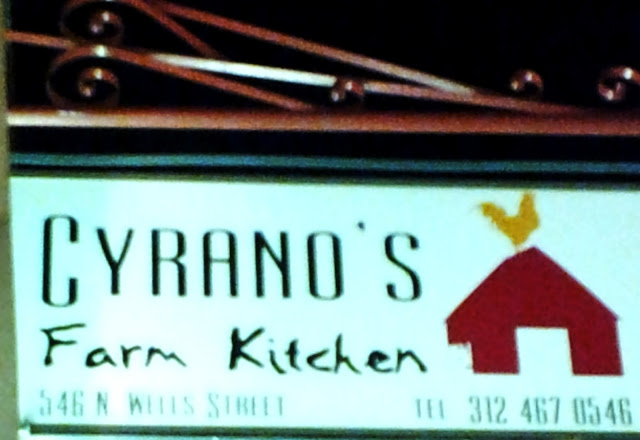