the food and the friends

so on Thursday night we arrived on time to LGA and got to the hotel and unpacked and then rushed out to meet up with Angela and Lee at the Greensquare Tavern in Chelsea (chosen for proximity to the show we would be seeing later that evening) Review: nice room and pleasant service but the food is nothing special.

we left and headed around the corner to the Metropolitan Room for the 9:30 show of Lauren Fox. I had read a review of her show about two months ago in the Times - since she only had three dates scheduled I figured it was unlikely that we would get this worked out but it turned out her final date was the same night we were arriving in NYC.  so there we found ourselves enjoying our two drink minimum in a lovely intimate room on 22nd street. 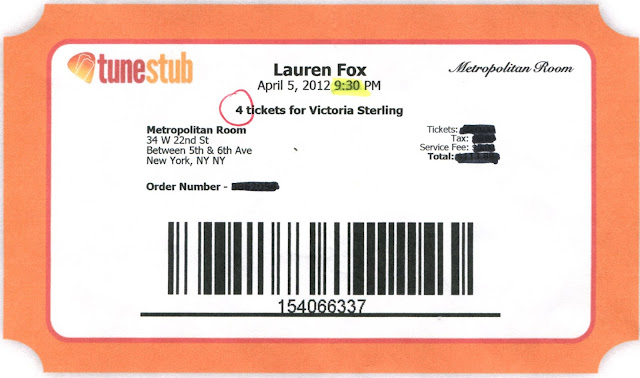 her show was an intertwining of the Leonard Cohen and Joni Mitchell stories from their meeting and brief affair on through each of their careers - focusing on their songwriting to show similar issues and life paths.
Ms. Fox used lesser known songs as well as a few of the most recognizable "hits" for each artist.  it was a lovely show which was intended as a surprise for Phil (who grumbled all the way there about how he was being dragged to some show that was a big effing secret!) LOL.  I think he liked it anyway....

the next day - Friday - was amazingly beautiful weather as we walked past the flat iron building on the way to lunch. things in NY were in bloom and so we took our time heading out- 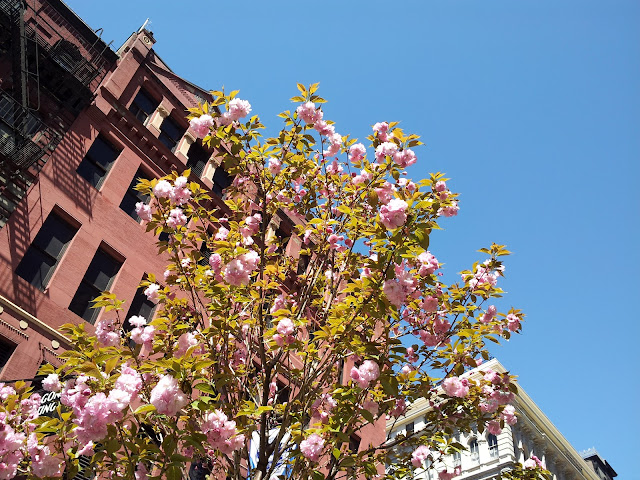 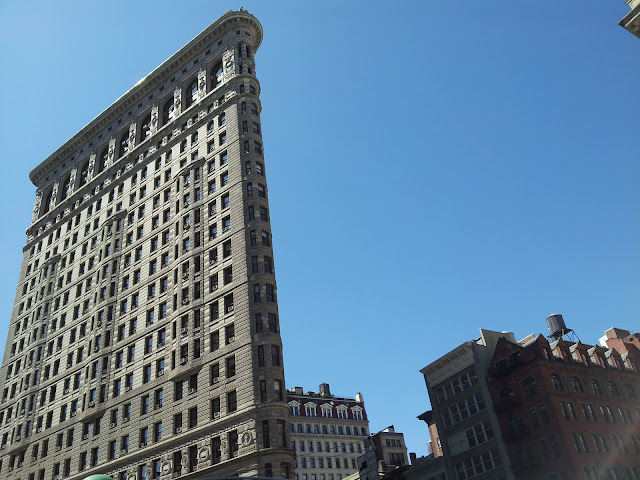 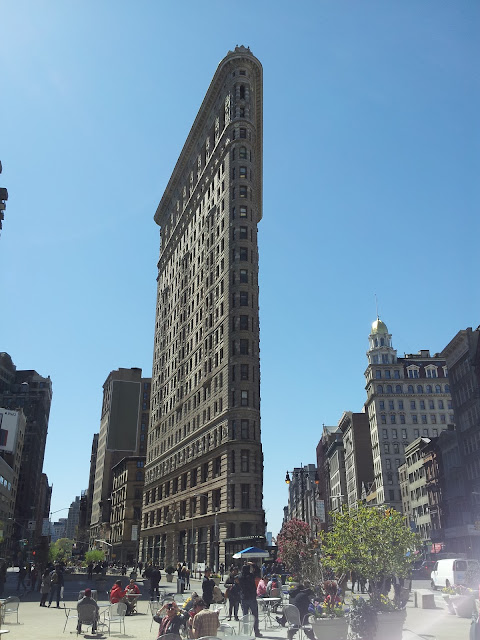 the photo below was from a window near our hotel - the store sold display models... LOL 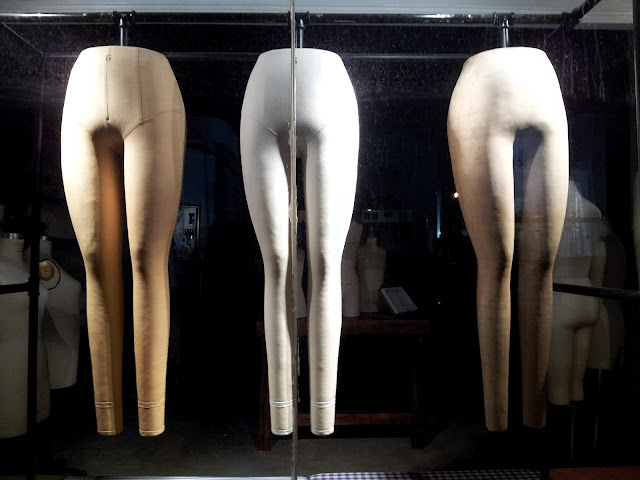 so on this Friday noon- we began our series of matched locations (double numbered where the address and street number matched each other) for restaurants by going to 15 East 15th Street for lunch with Jeremy and his friend Jenna.  the sushi was amazing and the meal was all around good- I started with oysters with ponzu which were incredibly tasty and Phil started with the tuna tartare- also excellent.  we shared sushi and sashimi plates and then finished with a couple of out-of-the-ordinary desserts.  after lunch Jeremy took us to see the exhibit on the sustainability program he has been developing for NYU. 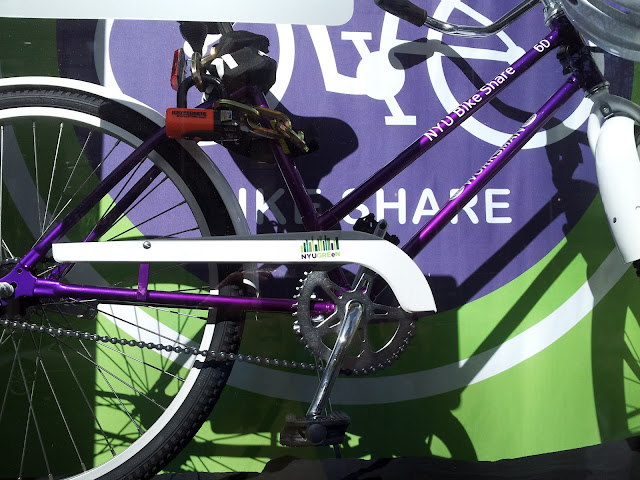 we figured he had been in NYC for almost 9 years (since fall 2003) and since he finished school in December 2006 he has been the driving force behind the NYU sustainability initiatives- of course he has lots of folks involved in the execution but he is the one who coordinates it all... and things have really been accomplished in the last five years-  YEA, Jeremy!

so then we go on the subway to the hotel as we had early-ish dinner plans for the Duck-A-Vore dinner at Wong's with Laure & Arno.  stupendous... amazing... incredibly innovative things done with duck - at least six courses.. and well worth the call ahead two days planning needed to get to the end result.

then we headed back to L&A (Laure & Arno- not to be confused with A&L- Angela and Lee) for some catching up time.

Saturday started with tea at noon with A&L and Lee's family at Lady Mendl's in Gramercy.  We had a chance to spend a bit of time with Brad and Susan - Lee's parents (easy people to be with- friendly and warm) and afterward had a double presentation of Angela's new lingerie line The Versailles Collection- one at the Google NYC headquarters where Lee gave us a tour and one in Angela's studio in Hell's Kitchen.

the preview show is next weekend but we got a sneak preview ahead of time. and BTW- more on the google visit in a separate post. 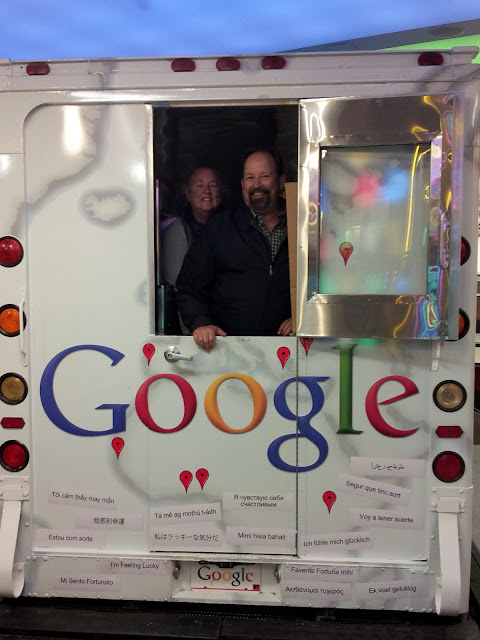 then dinner was at the Monkey Bar on 54th - we had a really good meal in a place known for the room itself.  I can especially recommend the steak tartare and the s'mores dessert.

the next day (Sunday) we met L&A for lunch at their place so we could see the world's cutest baby Alix! we carried in lobster rolls from Luke's lobster and then went for a walk along the Hudson River. 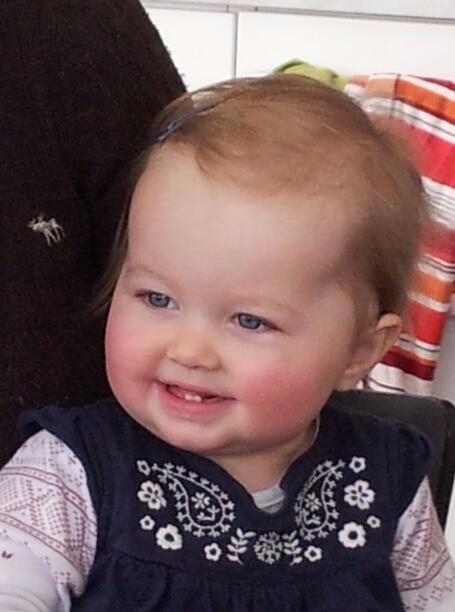 some photos of the area near L&A's place- where we walked along the Hudson River... 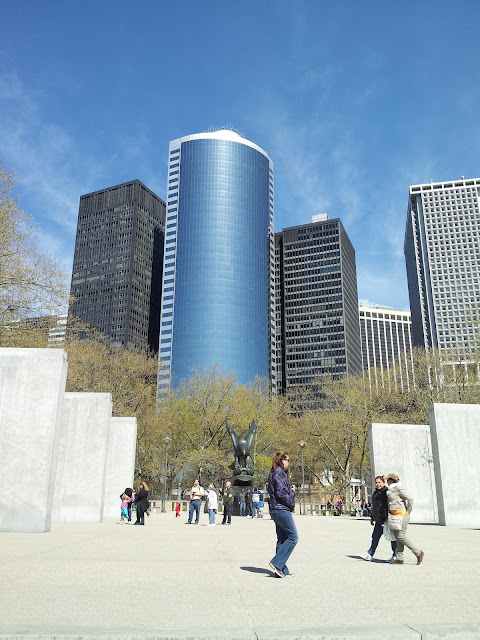 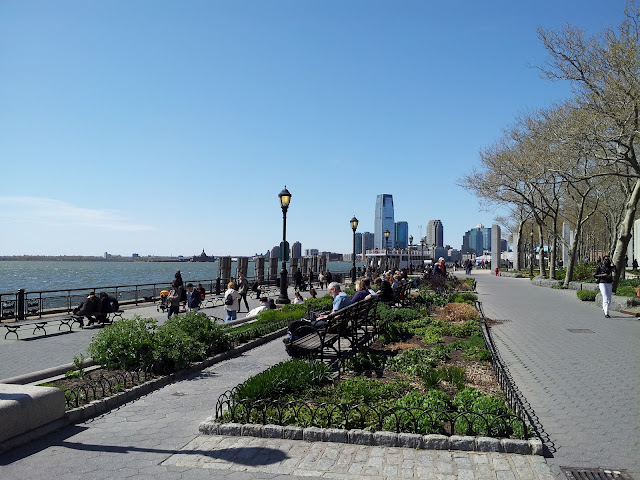 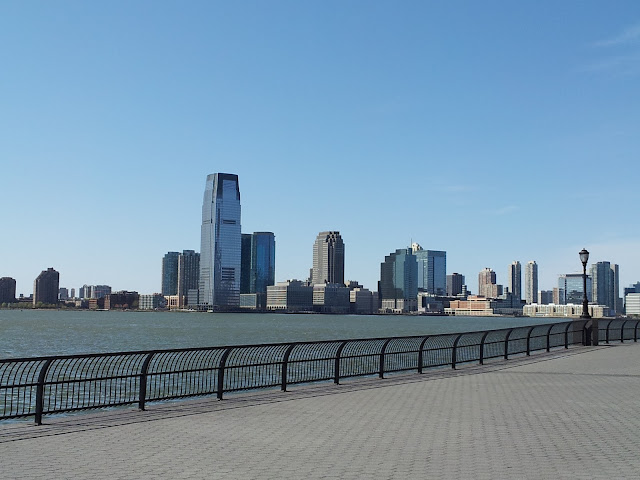 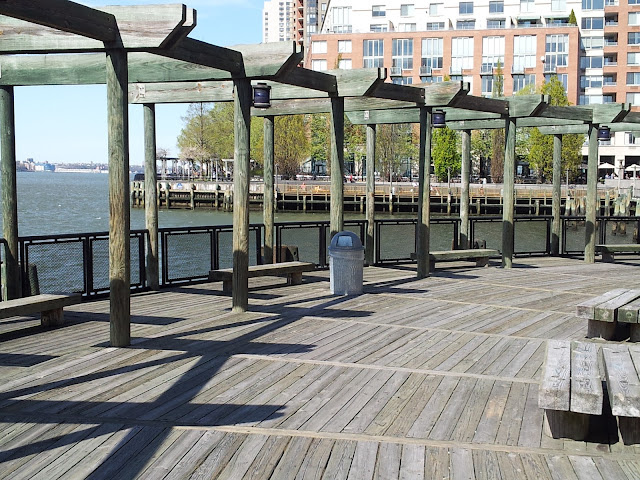 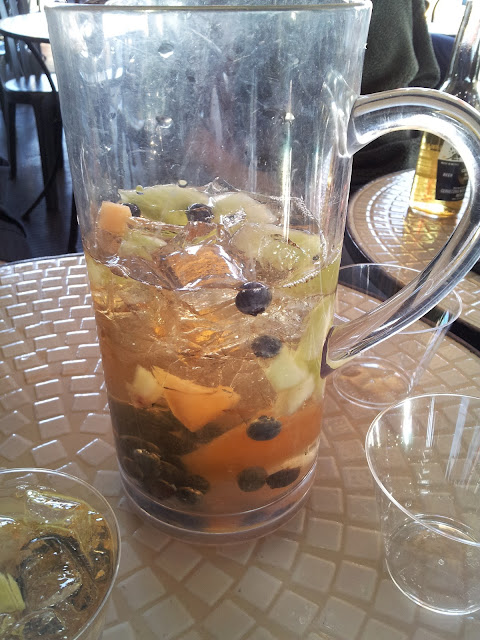 could have skipped dinner- LOL- but we had a later reservation at the second of our double number restaurants 18 East 18th Street- Craft.  lovely room- good food and first rate service- worth a return trip and we probably will go again next time we are in town.

Monday we had made reservations to go to Le Bernardin for the prixe fixe lunch (can't afford dinner there) which we did. I had mixed reviews of the food- the tuna tartare with foie gras was a dish worth crossing the desert for- WOW! the main courses of grouper and skate were both overwhelmed by the  heavy flavor of the sauces- the skate especially suffered at the hand of too much saffron in a zarzuela style preparation. however the desserts more than made up for the mains shortcomings--- another WOW... but overall we probably will not return unless we can have the tuna at the bar...LOL

Since our lunch Monday was not scheduled until 2:30- we pushed Monday night plans back a bit (but we were meeting Jeremy and his friend Vanessa for drinks and then dinner- and they had to come from work so it couldn't be too late...) we headed for the Knickerbocker Bar on University but found it closed for TV show filming (bummer) so we quickly went to Plan B- and had a drink a another place on the way to our dinner at the Gotham Bar & Grill at - you might guess it 12 West 12th Street! (for our third double numbered restaurant in four days!)

and excellent meal all around with the winning dish being Jeremy's mushroom risotto with pancetta. I was too stuffed for dessert but Phil seemed to enjoy his one scoop of dulce de leche ice cream. after hugs all around - we got in a cab and headed "home" as my shoes had finally gotten the better of my feet.

Tuesday morning we got up and left the hotel and headed to Grand Central Oyster Bar for lunch of chowder, oysters and lobster rolls before heading to LGA- the old time bar was populated with the whole spectrum of folks- real NYC folks as well as tourists.... 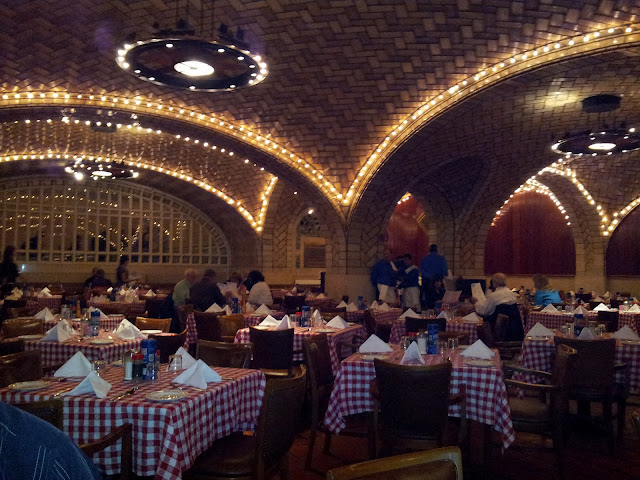 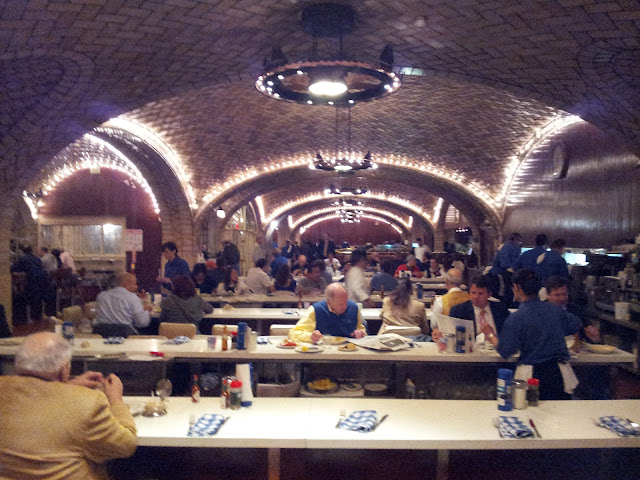 our flight home was late leaving but early arriving to ORD so we were home by 6 PM.  of course since I was a road warrior for nearly two decades I have been through the United terminal a thousand times but this time I stopped for a photo... 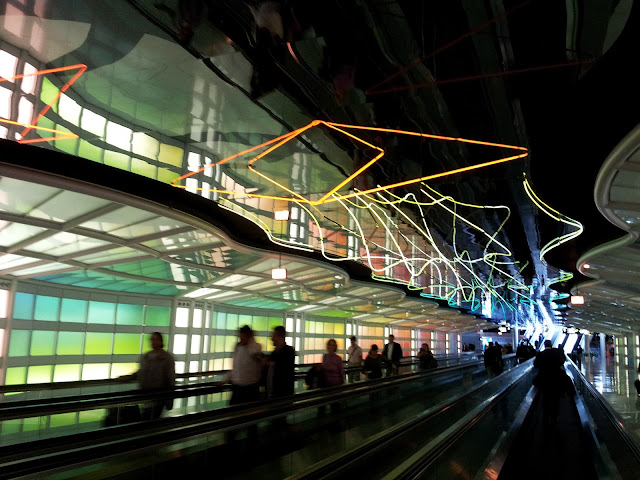 today I am getting the final things ready for Cuba and tonight we have a play at Remy Bumppo - meeting Phil's folkie friend Vicki for dinner before at Barleycorn's near the theater.

zoom zoom- before we left town I had lunches on two days with two of my old CEOs and I hadn't seen either of them in months and months- the time just zips by.... excellent trip- the great thing was getting to spend time with each of the kids and with L&A and meeting Lee's family was really fun too.  while we probably won't get to see too much of Susan & Brad - they were very personable and it would be good to see them again if the occasion arose.
Posted by TOR at 12:40 PM