we begin our days and nights in Paris

we were on a streak of good luck- because our upgrade on miles came through on the Sunday before we left... the over night flight can be problematic (which is why you might recall GA and I bargaining with Royal Air Maroc for an upgraded seat to Casablanca... in the US bargaining is not a way of life so if I offered the United person half the price of the upgrade they would likely laugh at me rather than say (as the RAM woman did) "I'll ask my supervisor" LOL - and her supervisor was savvy enough to say- I can leave these seats empty or I can create more revenue by selling them - even if I don't get the full amount we ask for them... but really - sometimes I do wonder about how businesses are run (but don't get me started on the airlines) as of Monday morning I had flown 1,498,172 miles on United and with the flight to Paris I am now over 1.5 million air miles- so I can go on and on about how the airlines actually might be improved but we were in Paris! - so I won't.....

We took the RER B to St Michel from CDG and then transferred to RER C for one stop- getting off at Musee d'Orsay and then it was a fairly short walk to the Hotel Pont Royal (a new one we thought we would try)- we arrived around 10:45 so the room was not ready- and the woman at the front desk was less than stellar at her job.  This is the point in the narrative where the author of the mystery novel says something like "had I but known..." well had we but known how difficult our stay at this allegedly five star hotel would be - we would have hightailed it out of there - but at this point we were seven hours off synch with our time zone and seriously in need of sleep. I had requested a higher floor for quiet and they gave us a third floor room. I had also paid extra for a package that included high speed Internet (rates in France for bandwidth are notoriously expensive) and I will give you the thumbnail sketch on this so we can move on the actual trip and not the shortcomings of the alleged five star Pont Royal. When we checked into the room we crashed and when we got up not only did we find no internet at all - we found no TV at all as well... so we called the desk and they suggested we move- we grudgingly said yes but then they told us they couldn't move us because they had no other deluxe rooms- then OVER THE COURSE OF THE NEXT 48 HOURS sent no less than three TVs and 5 cable wifi routers to our room to replace the non working ones to no effect whatsoever.  We finally told them stop sending people to our room and just forget the high speed- we were getting 2.1on the speed tests (versus 29.7 the week before at a different hotel) we agreed that rather than a credit we would just have our breakfasts included and thought we had tackled the issues completely. (more on that later) 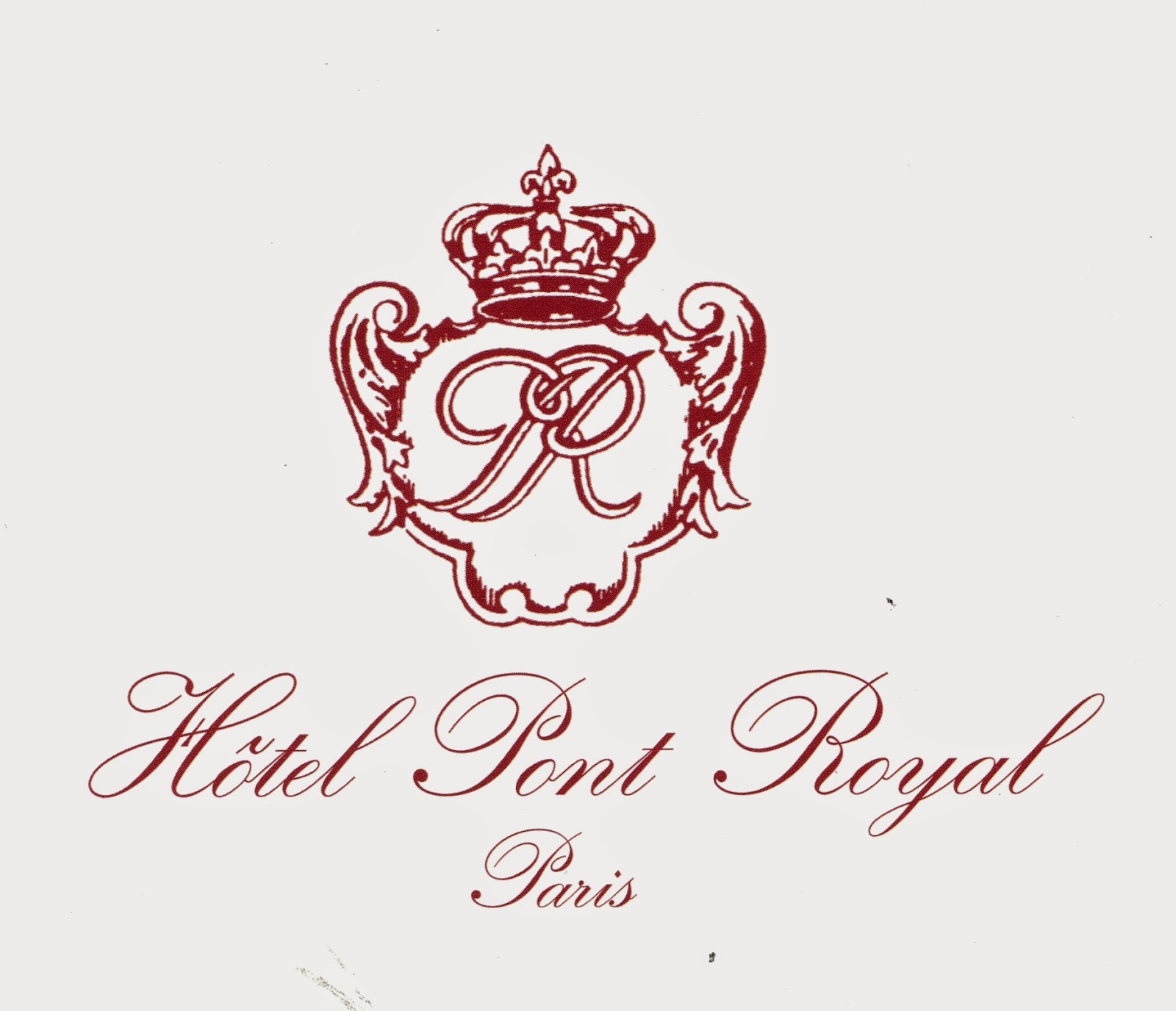 We had an early dinner reservation at the Atelier de Joel Robuchon so we skipped lunch and went to stand in line with all the other tourists (LOL) for the 6:30 opening time of the place - they don't take reservations except to fill the place for the 6:30 hour and then they have the restaurant cleared of tourists (who are willing to eat at that hour because they either are on a different time zone- like us - or because they want to ensure they will actually get in) by the regular dining hour of 8:30 or 9 PM they have cleared the place for locals who then can wait hours for a seat. 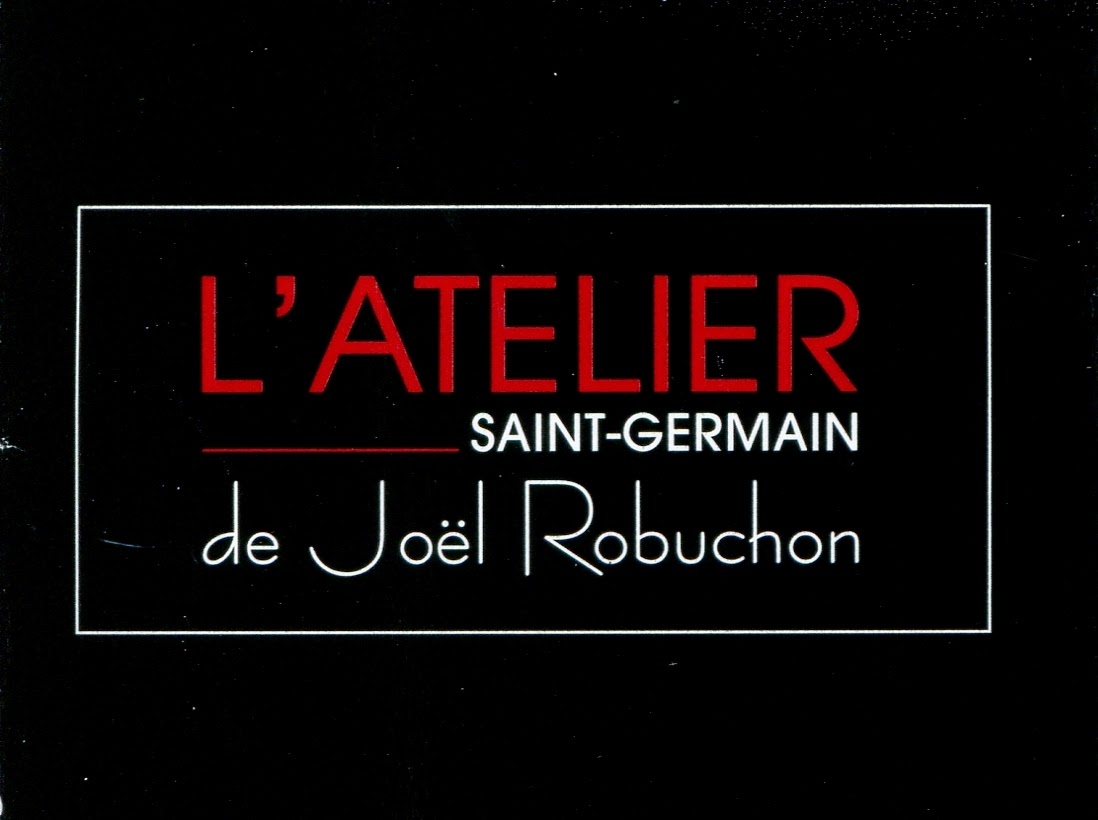 so here is my review (I did not take photos of each course, as it isn't the kind of place that encourages it) the food was incredibly well executed - and we really enjoyed our meal and would go back despite the very steep price because the service was excellent - attentive without being overbearing and the food top notch... 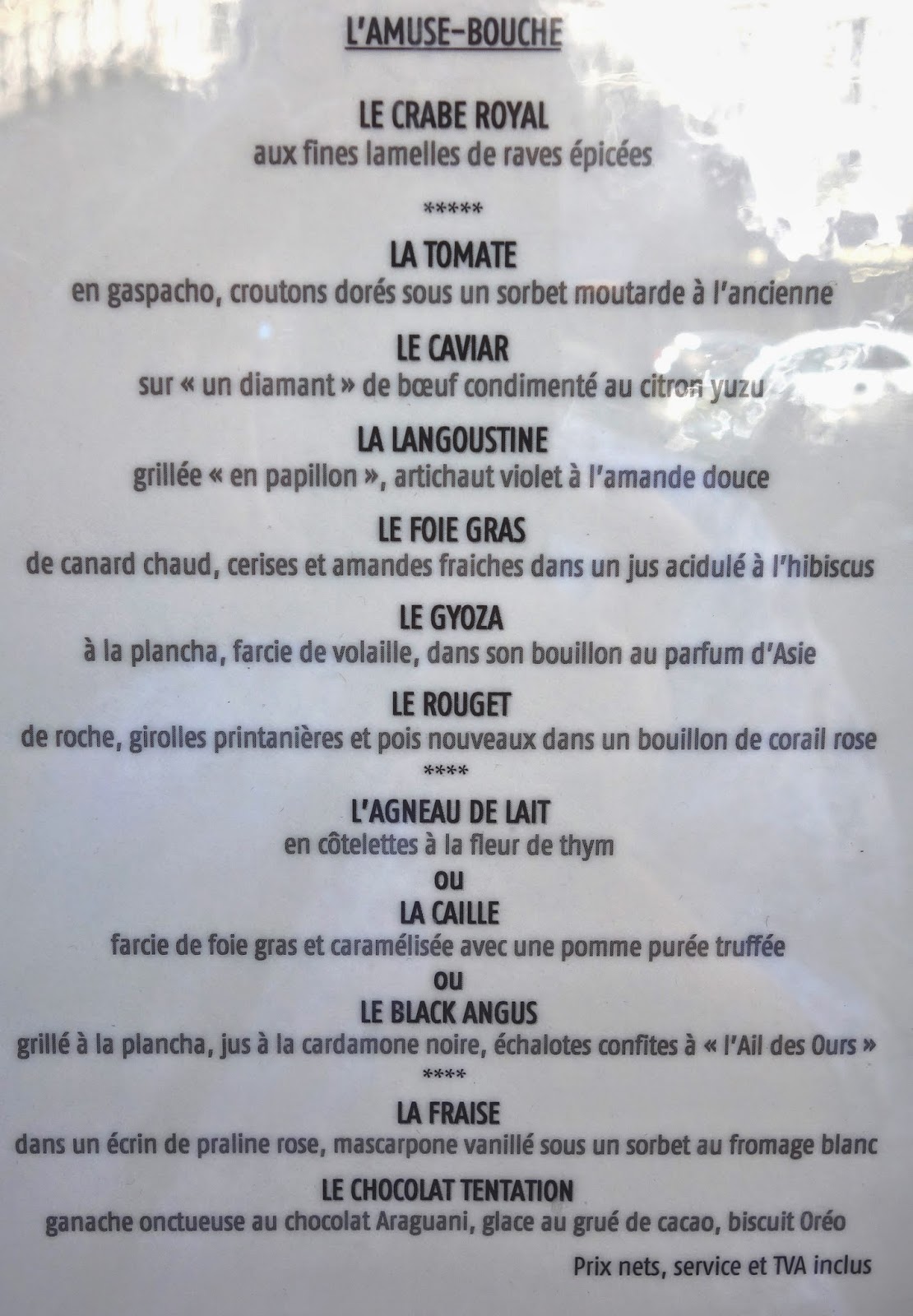 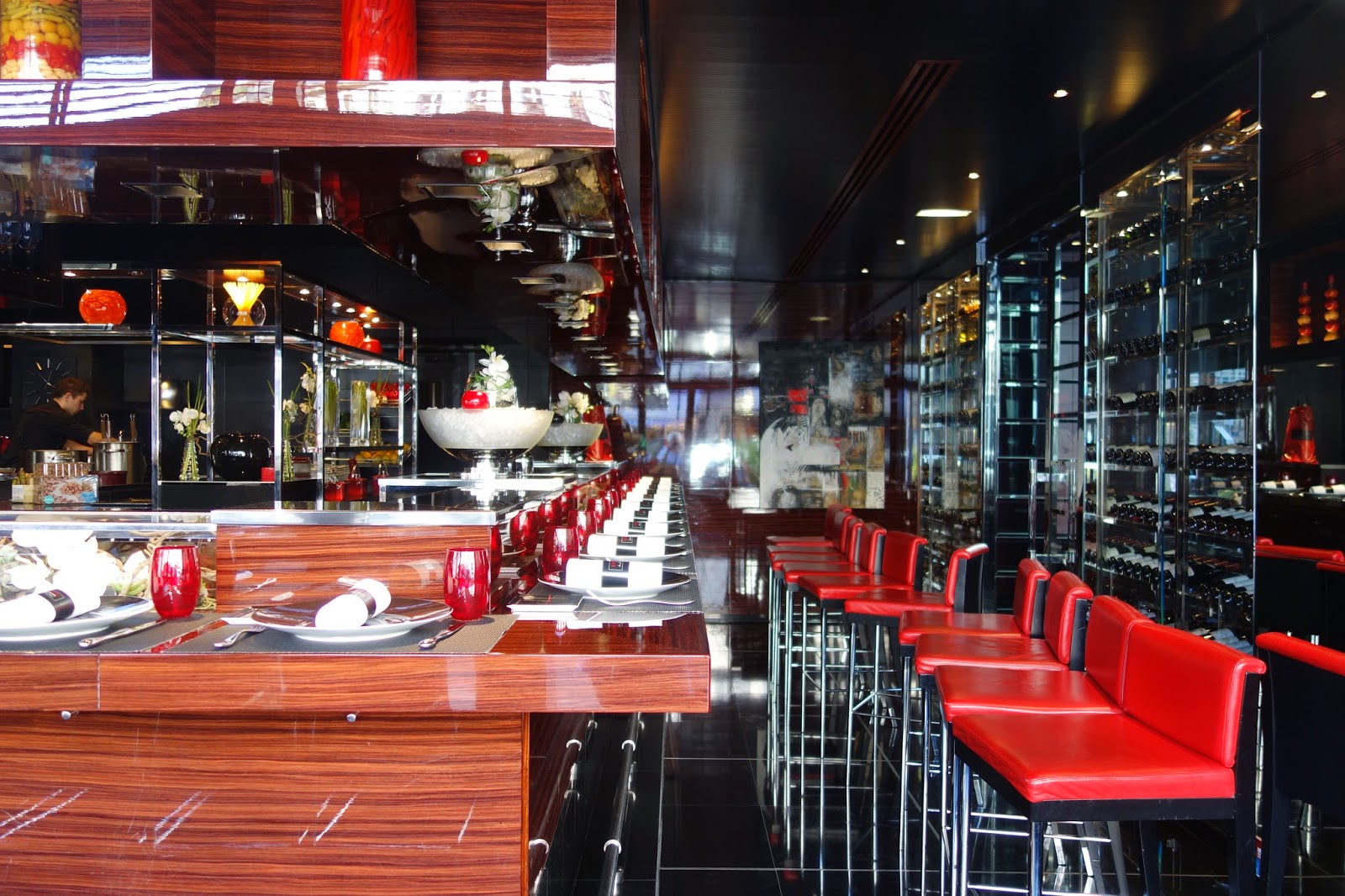 here is the menu broken down by courses- all of which were beautiful to look at and tasted even better- and without giving it away- this was just the first of pretty much two solid weeks of stupendous food and wine- and just to give a feel for it - my tweet upon return was #32 cheeses! 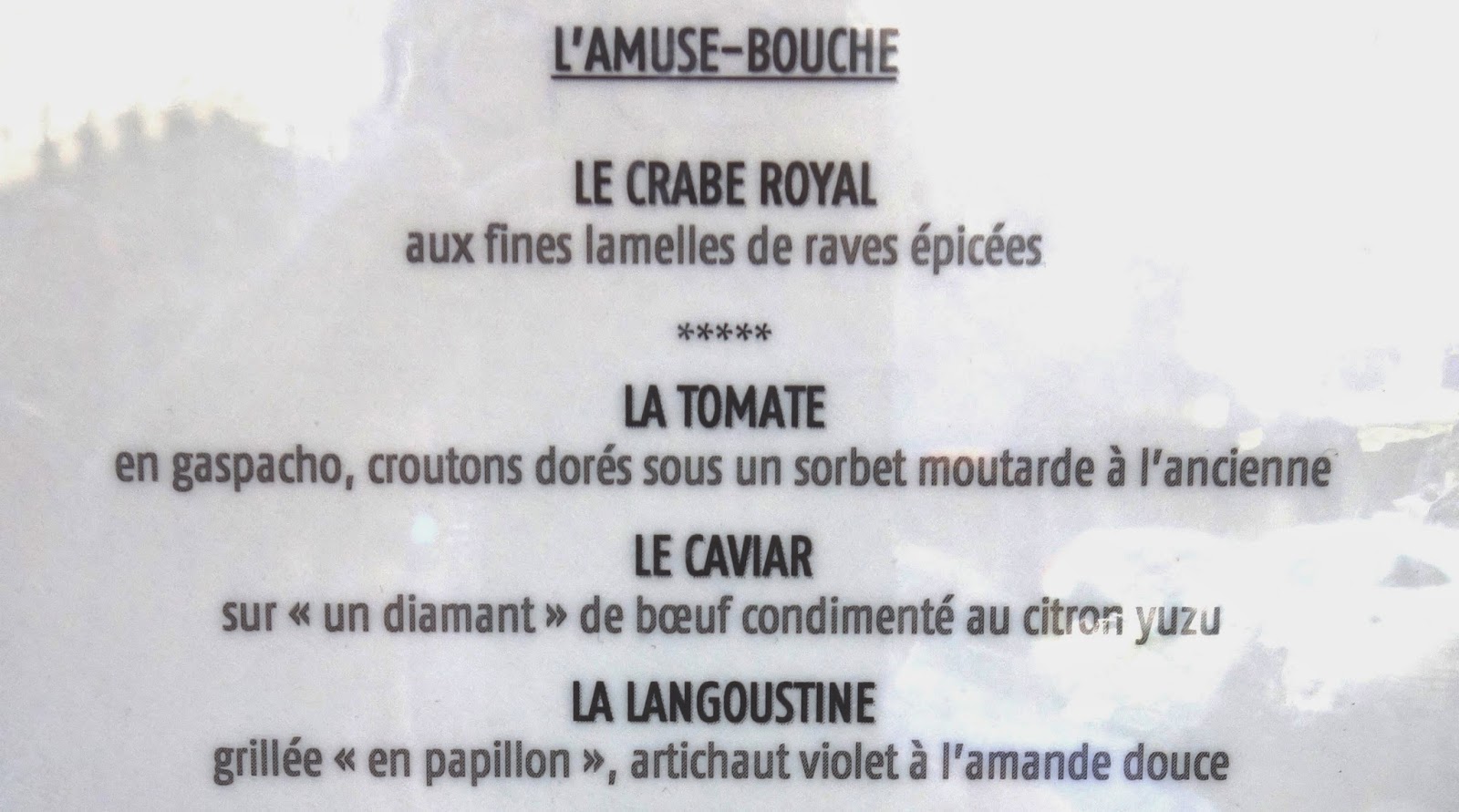 after this amazing three hour meal we returned to our room hoping to find working high-speed Internet (Blackhawks playing in the Stanley Cup) but instead found a bottle of champagne and a note of apology (they were great apologizing but completely ineffective at fixing things) Eventually they apologized so much we got four passes to the Musee d'Orsay and three mornings of breakfasts (which were great by the way) but then when we sent laundry out for cleaning on our last full day they returned it minus a pair of black pants (FAIL!) but now you have heard all the complaints we will have had for the entire two weeks.

we slept pretty well but were up at dawn the next morning - had the excellent hotel breakfast and went out to the Louvre... we walked along the Seine and it was a beautiful sunny morning.  CBGB were headed to Paris this morning but we were unsure of the time. We made a lunch reservation at a place we had tried last time - near the hotel called Ferme St. Simon.  And went off along the river- to the Pont des Arts... where the bridge is now COMPLETELY covered including the lamp posts with locks. I took a bunch of photos in the sunny blue sky day and only later discovered that there was no memory card in my camera (I am pleading jet lag on this one- LOL) so you will have to use your imagination- LOL but here is a painting I had purchased from a vintage art website that shows the Pont des Arts for your edification- obviously in the 60s when this was painted - no one was hanging locks from the bridge- LOL 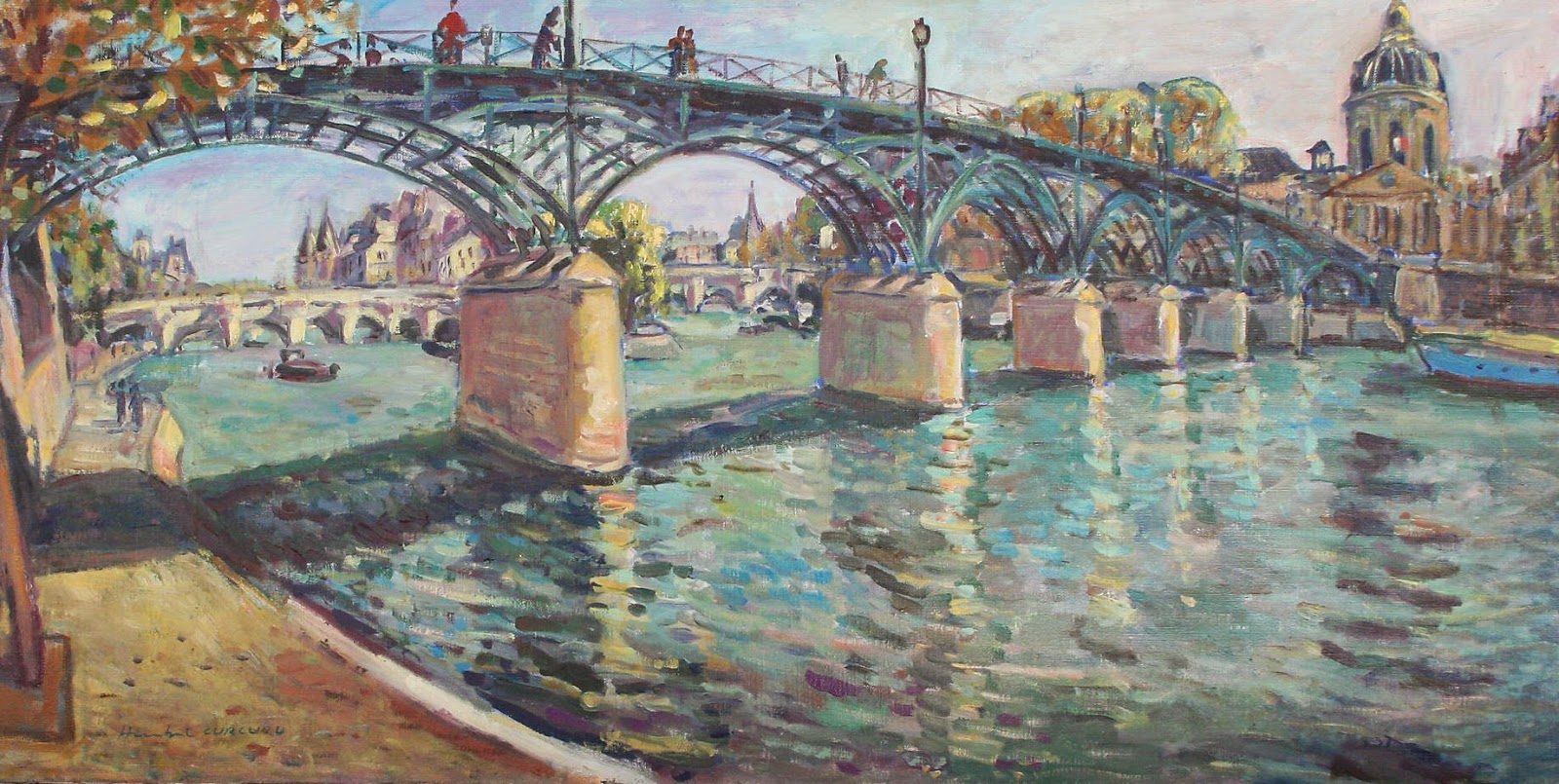 we did get to the Louvre pretty much as it opened so not too bad on the crowds (except in front of the Mona Lisa of course) - we headed pass the ML and on to the galleries with the spanish painters Phil likes but I am not too keen on Goya and El Greco... too dark for me--- and it was there I discovered that the numerous photos I had been taking were the equivalent of "air guitar" with the camera...  I guess by then I actually was awake LOL... time stamp on ticket is 9:14 AM... an hour Phil rarely sees- LOL 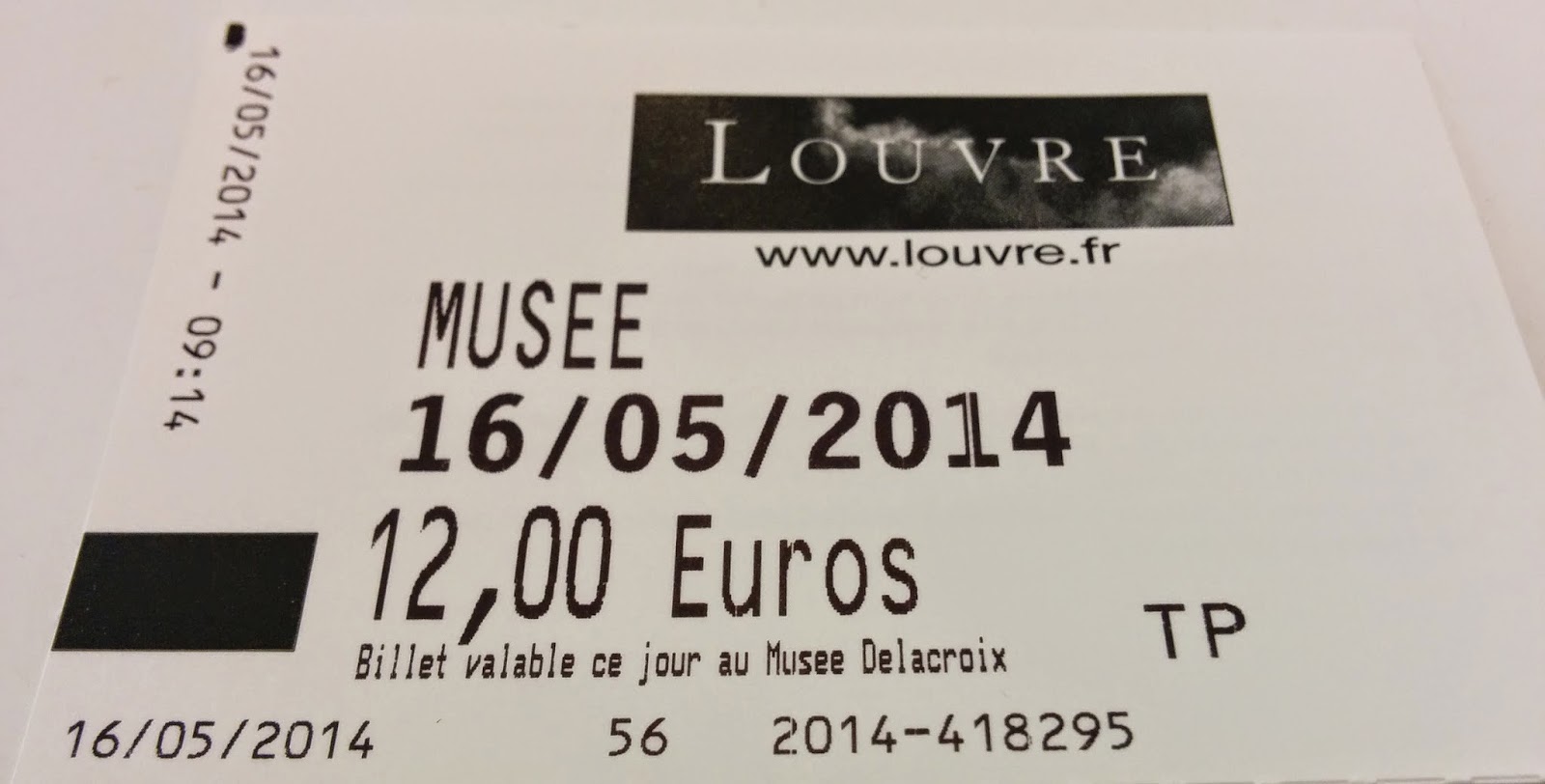 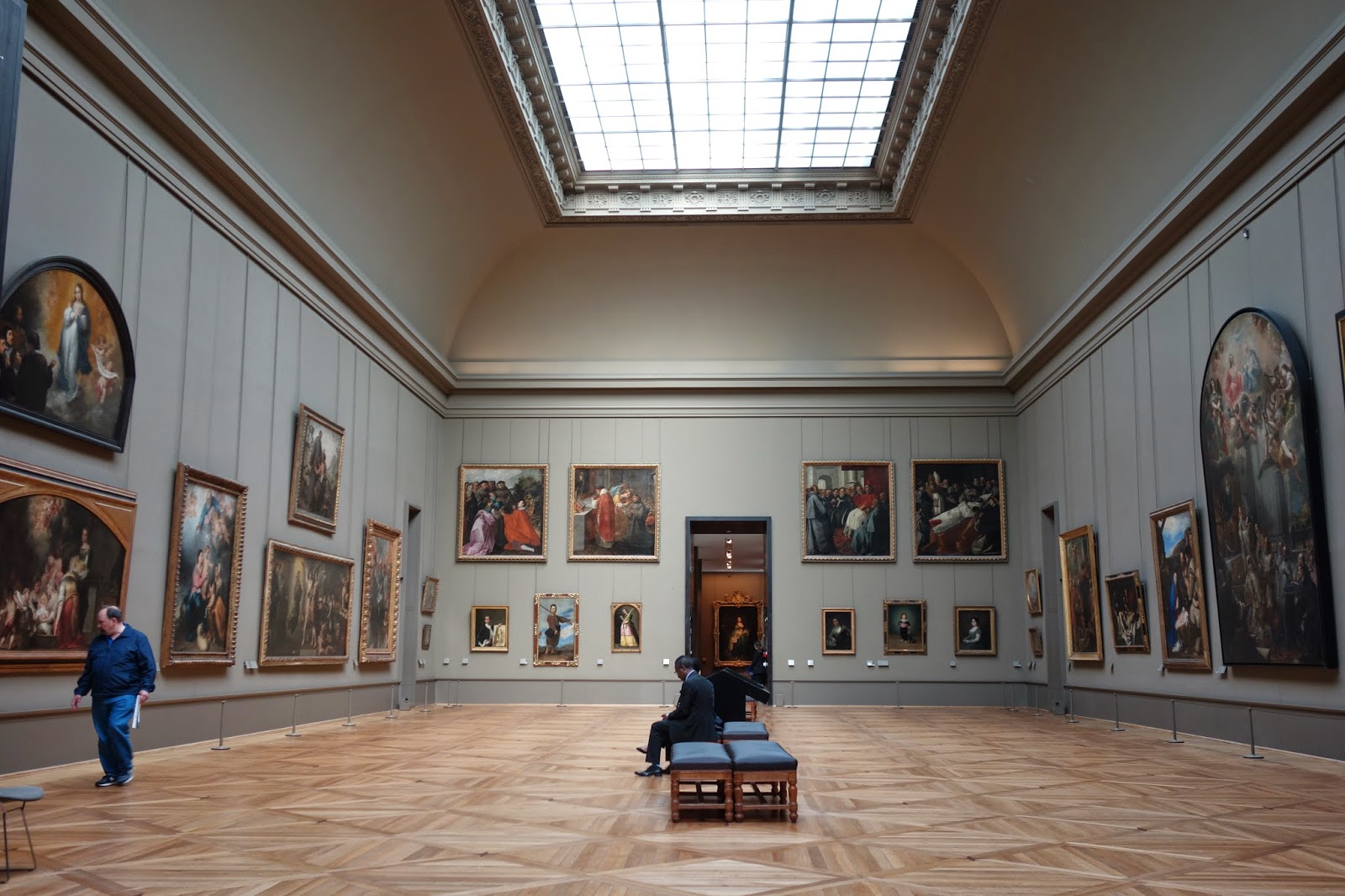 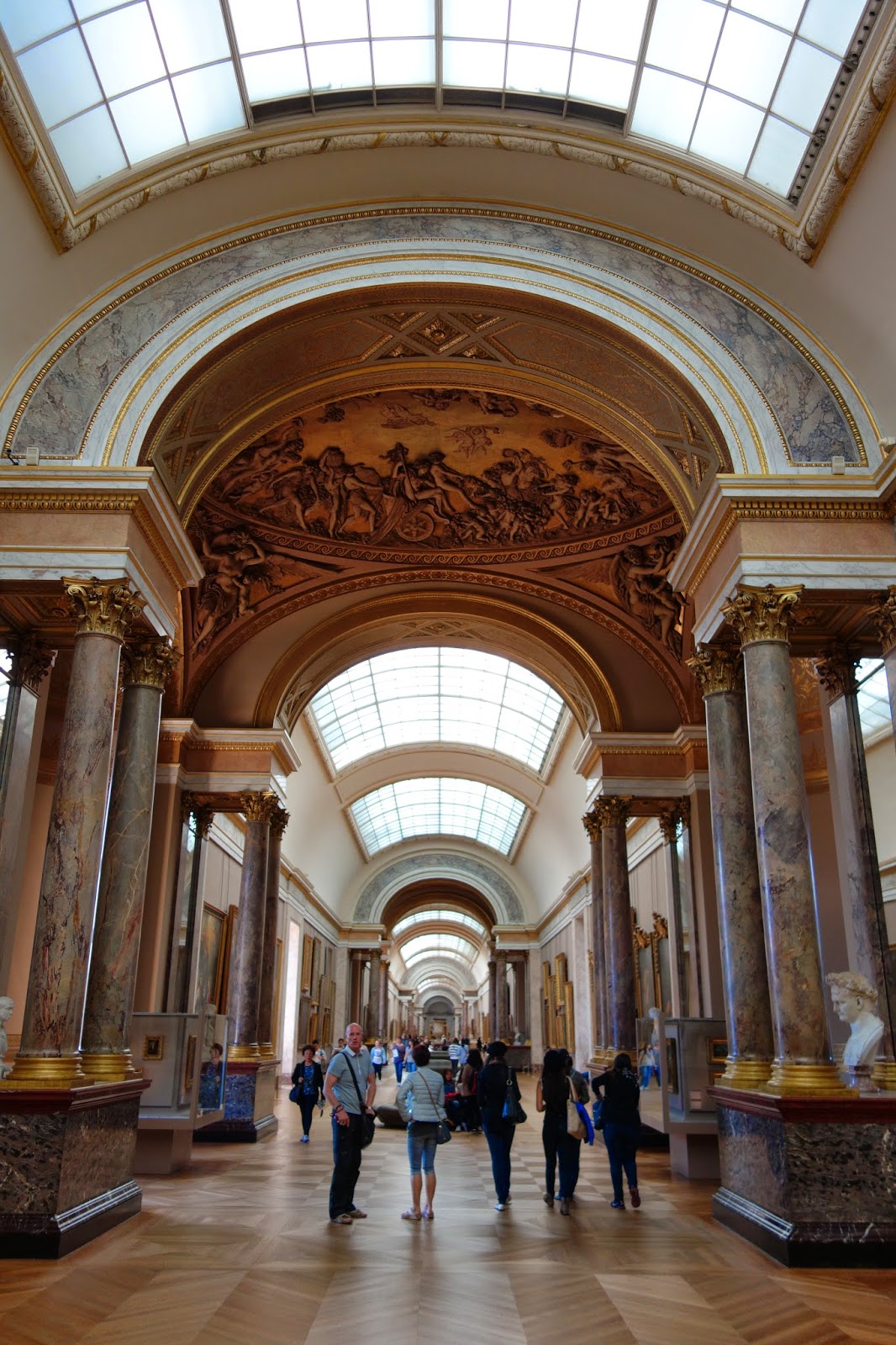 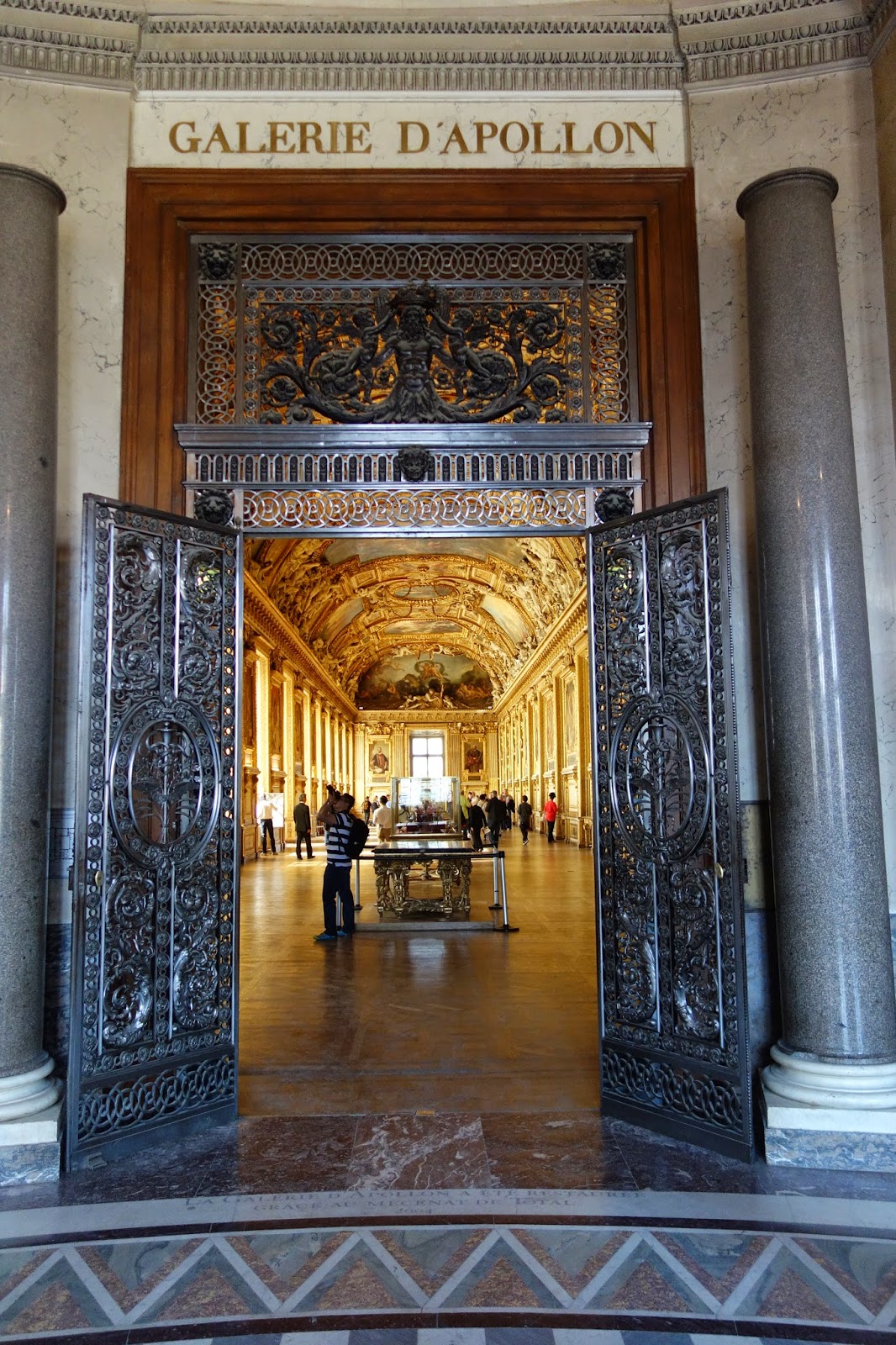 a view from an upstairs window- 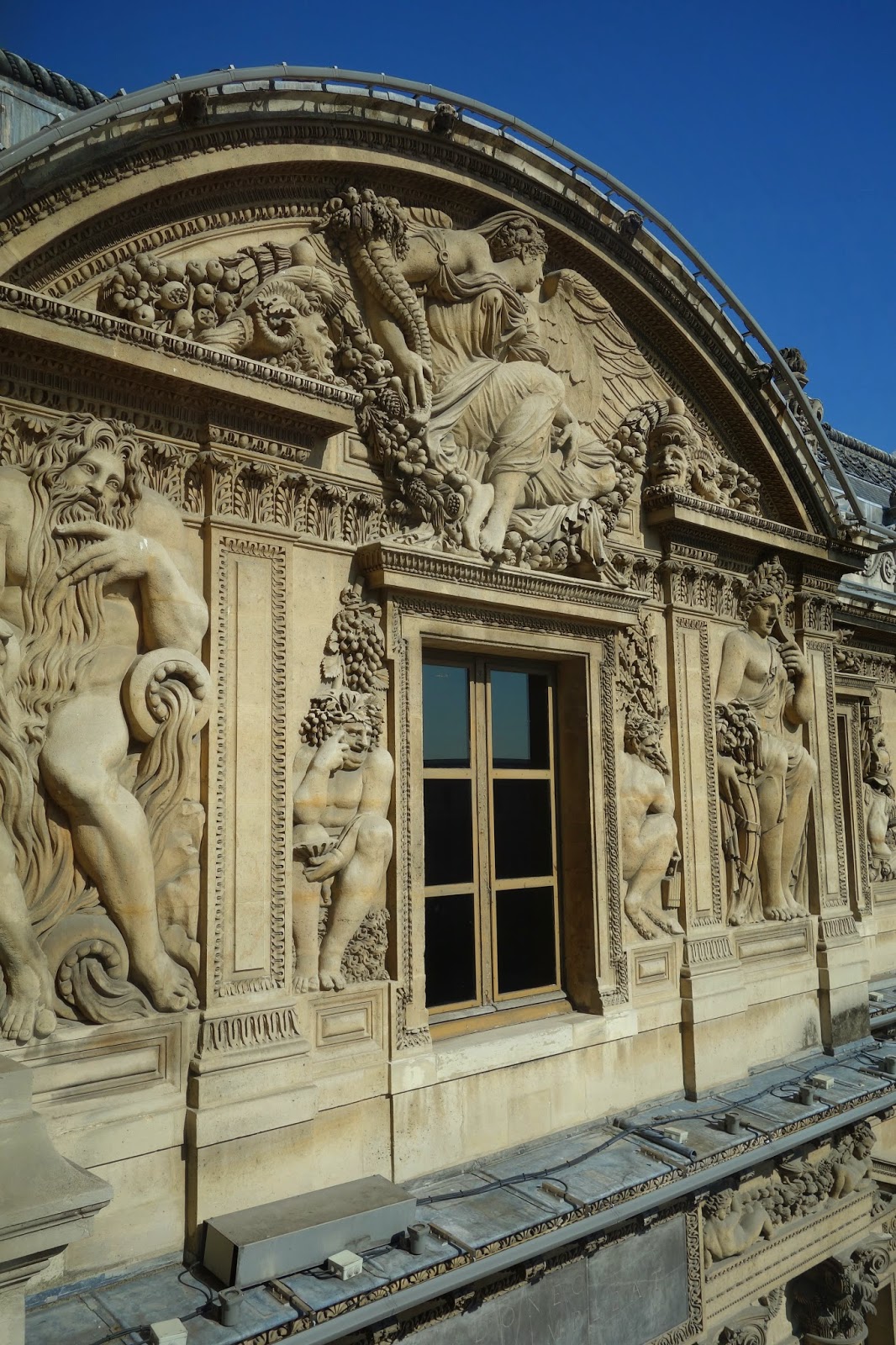 another view from another window- 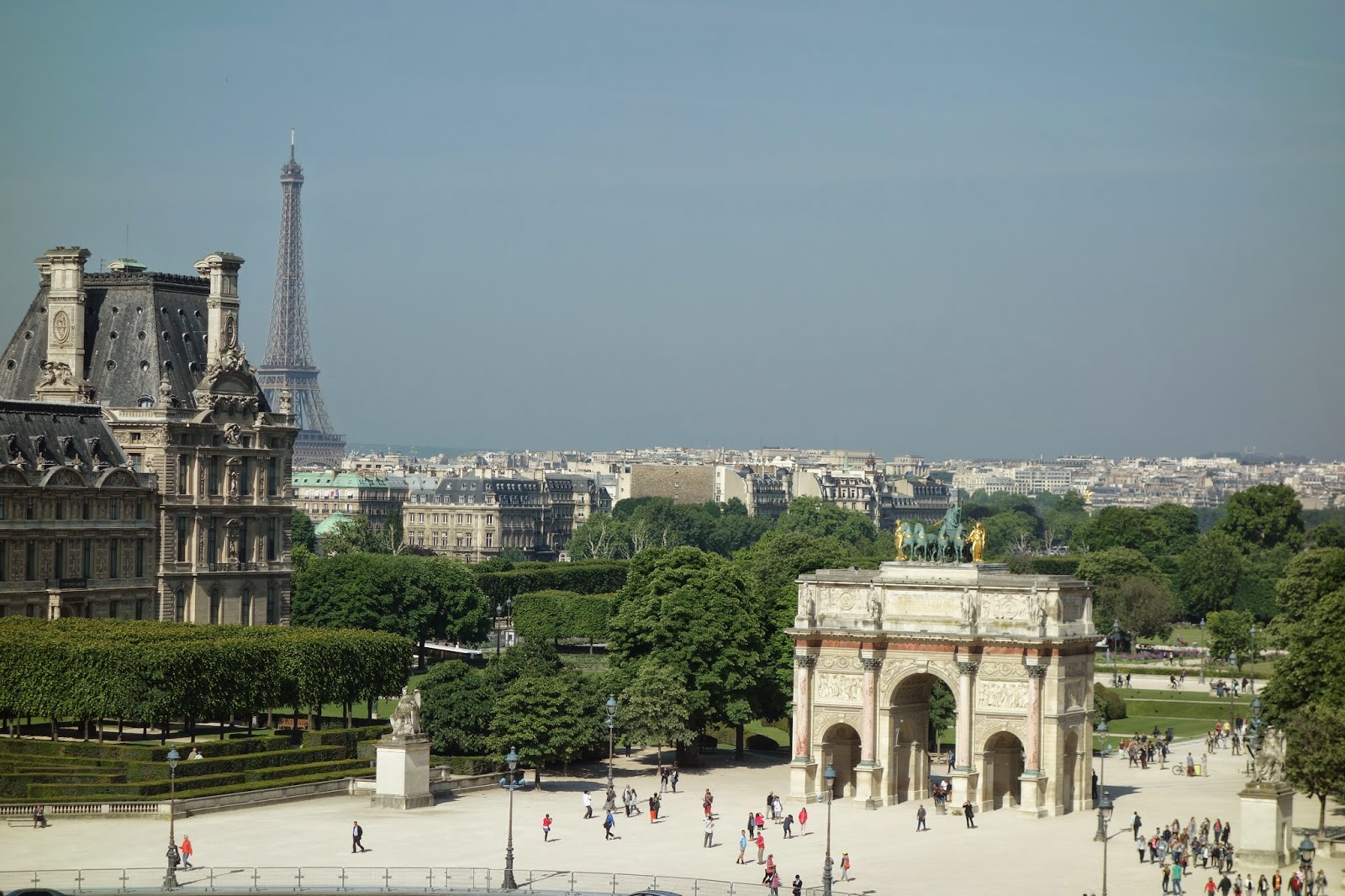 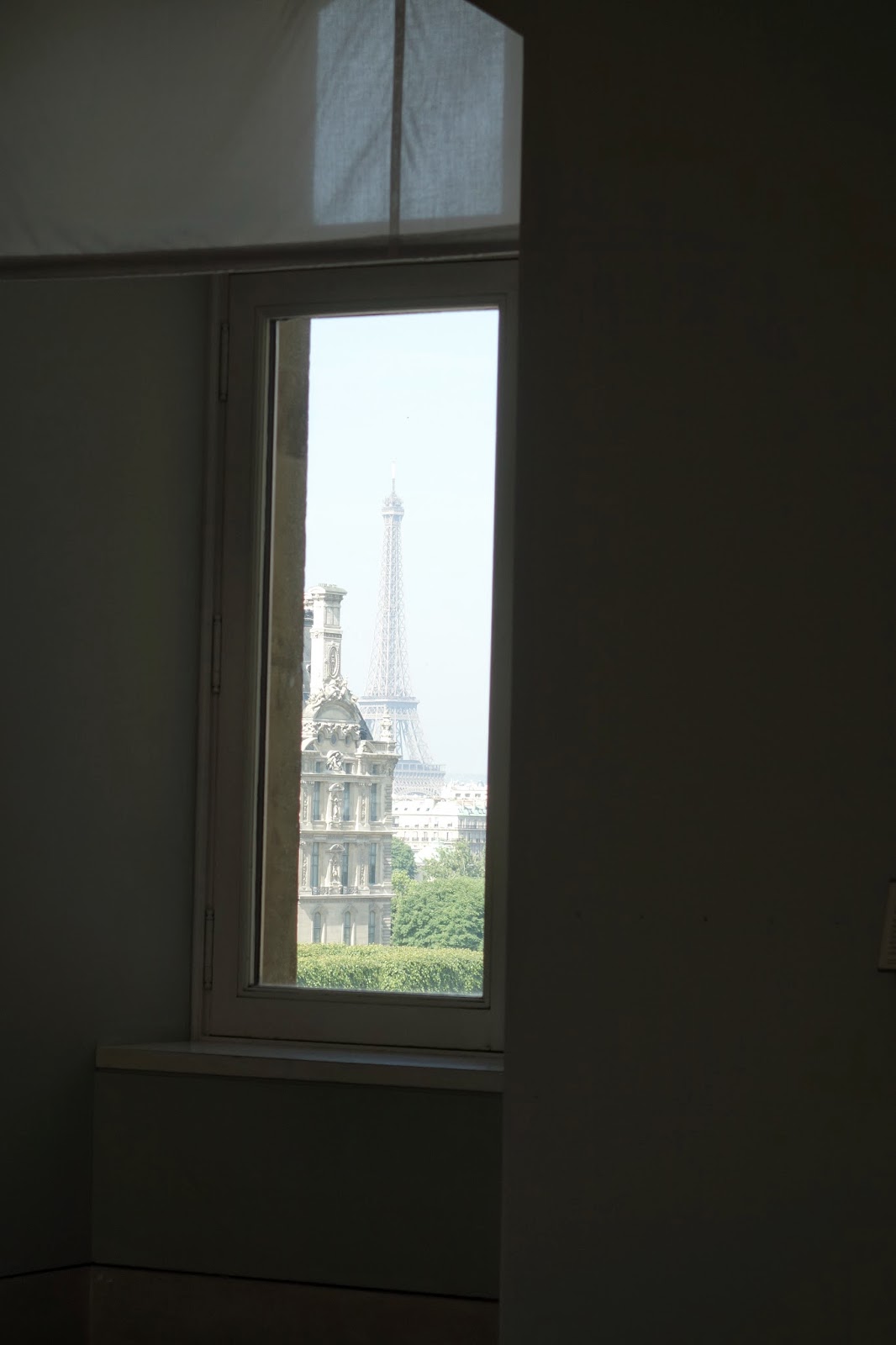 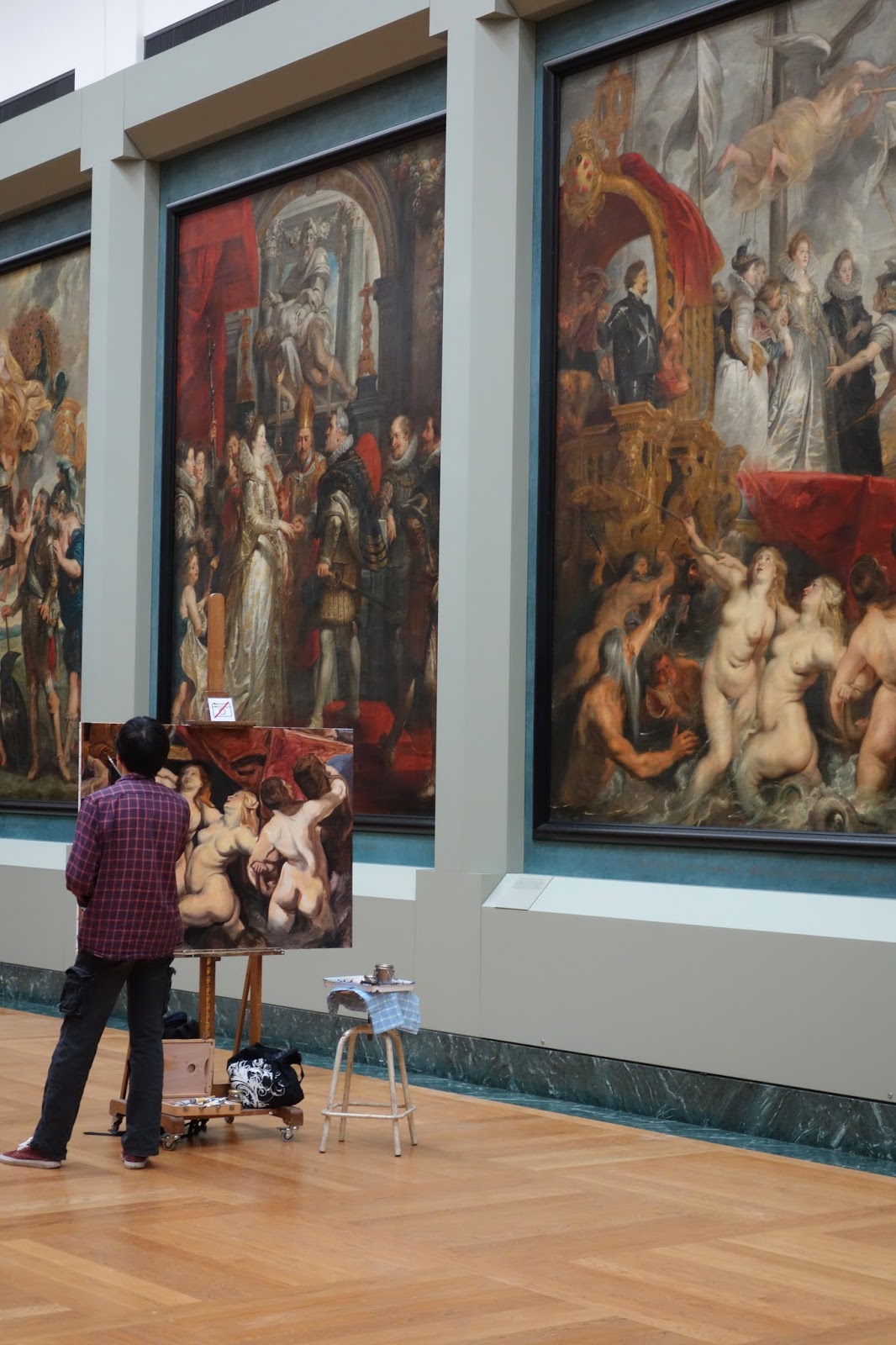 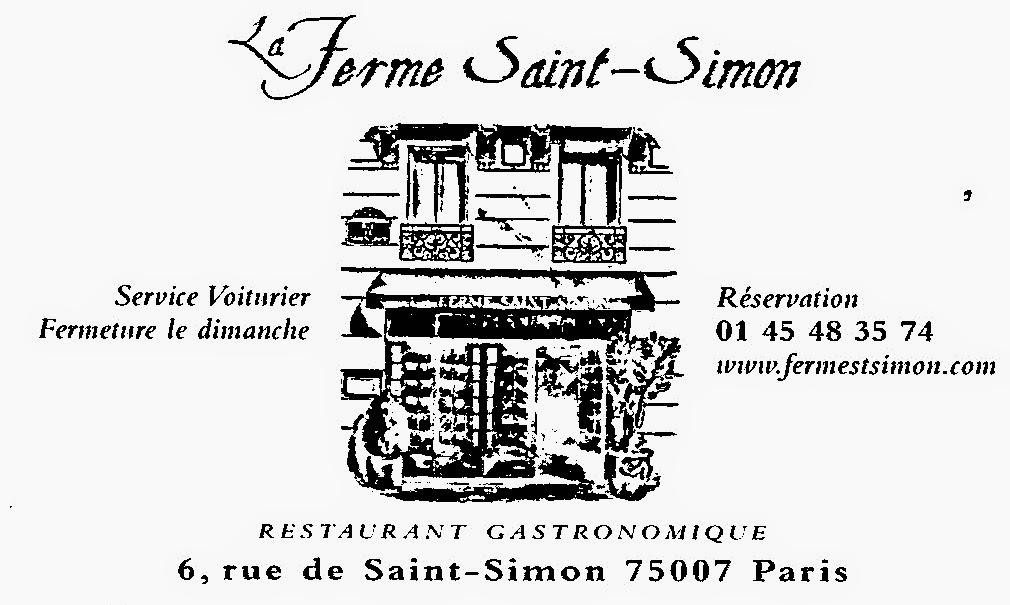 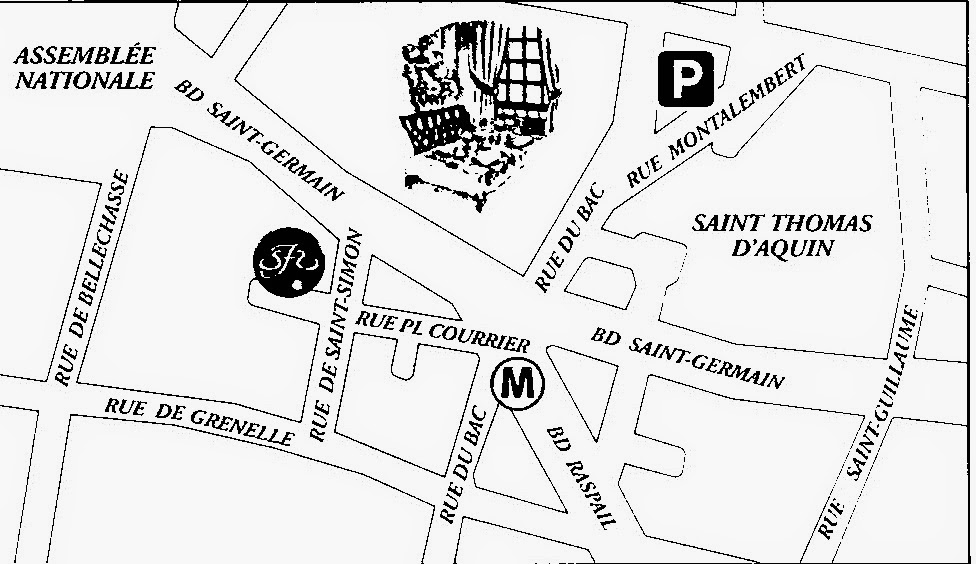 By the time we finish lunch CBGB still have not arrived (we later find out they were stuck in traffic in a cab) so we decide to nap.  When we wake they have arrived but are not in the their room, having acclimated to the time having been Barcelona for six days, they are out exploring Paris' sidewalk cafes... we finally get together before dinner to share the champagne chilling in our room as a toast to the upcoming days together.
Then we take a cab to dinner at Au Bon Accueil  in the sight of the Eiffel Tower- 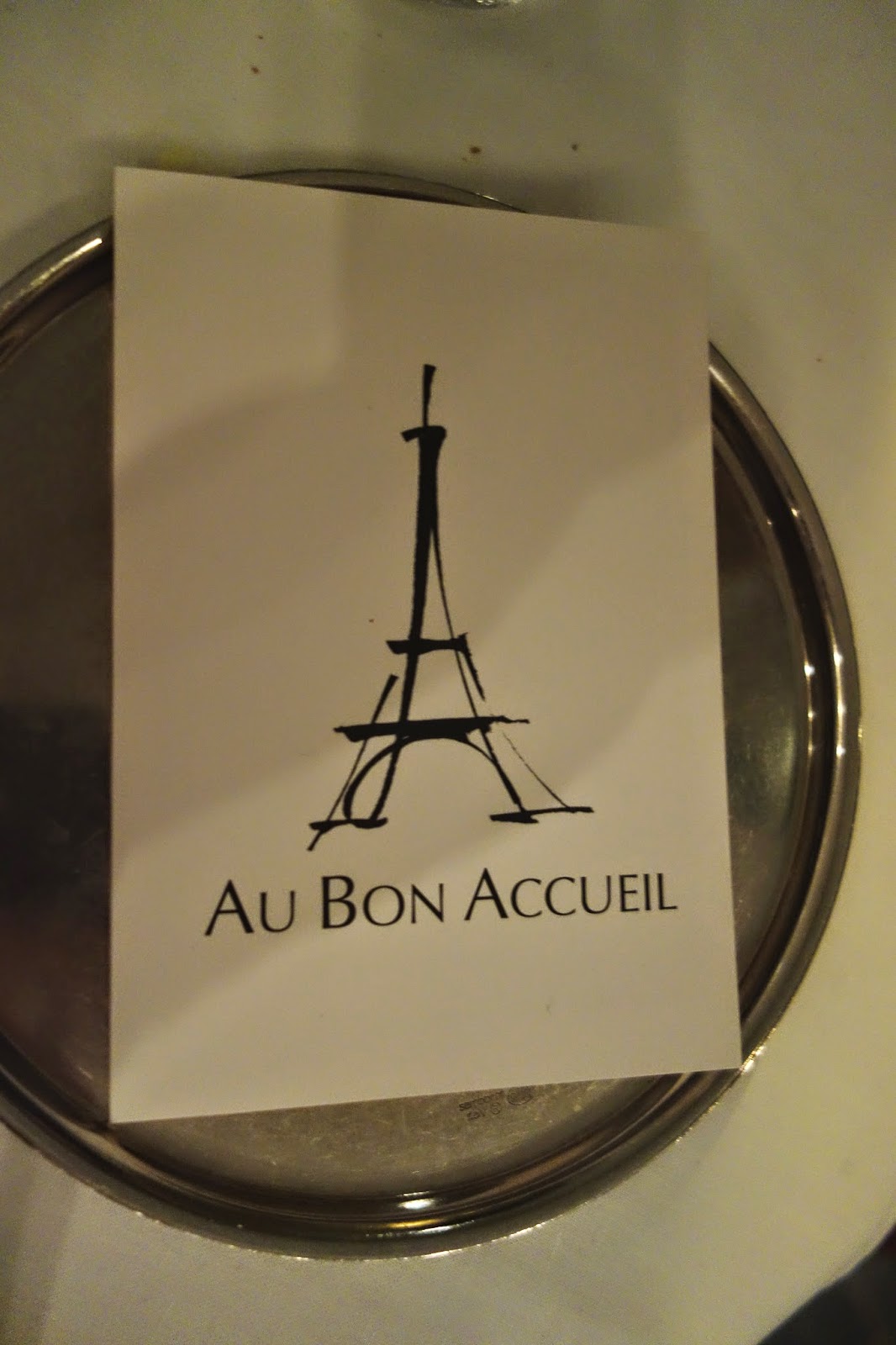 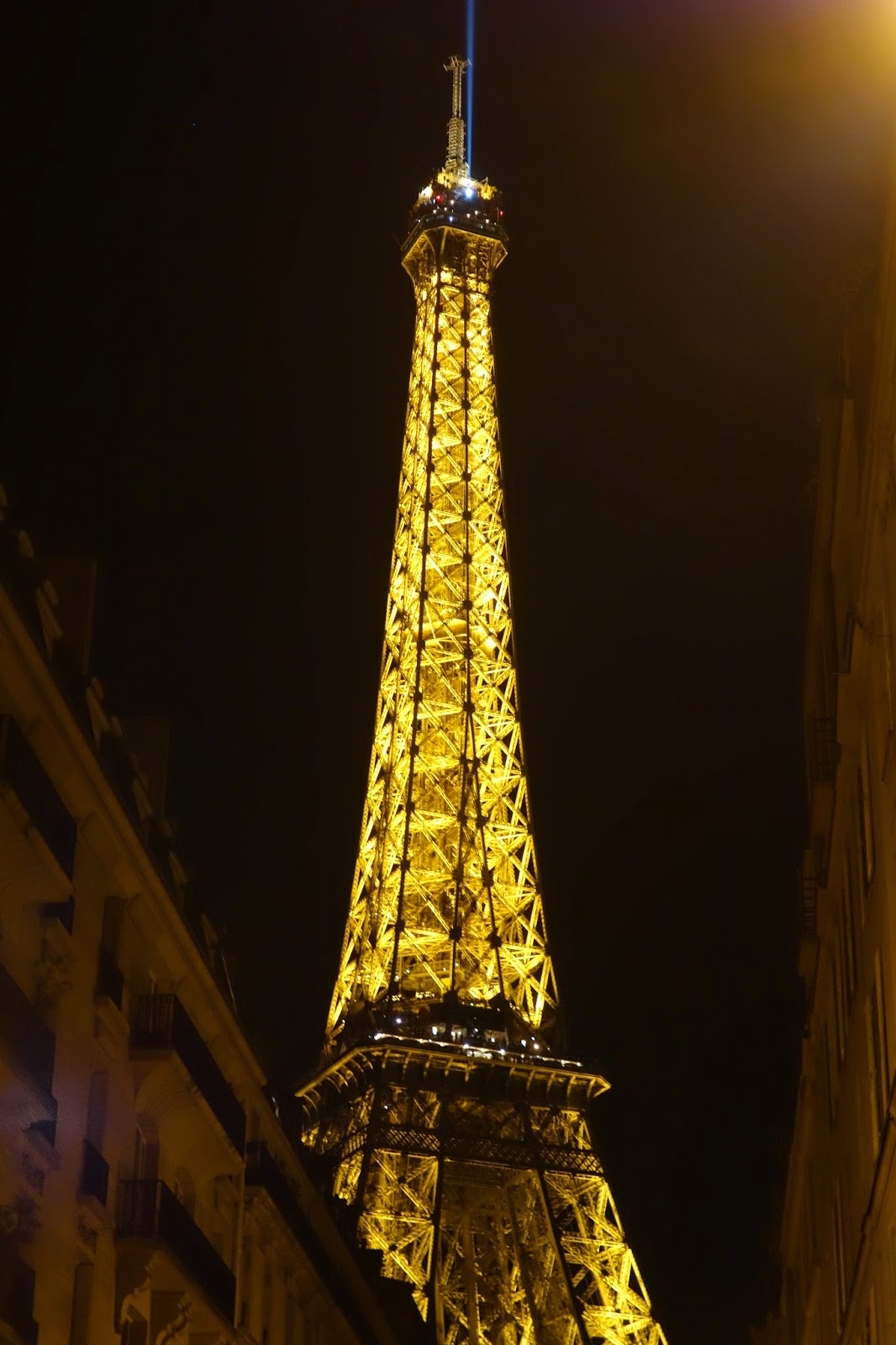 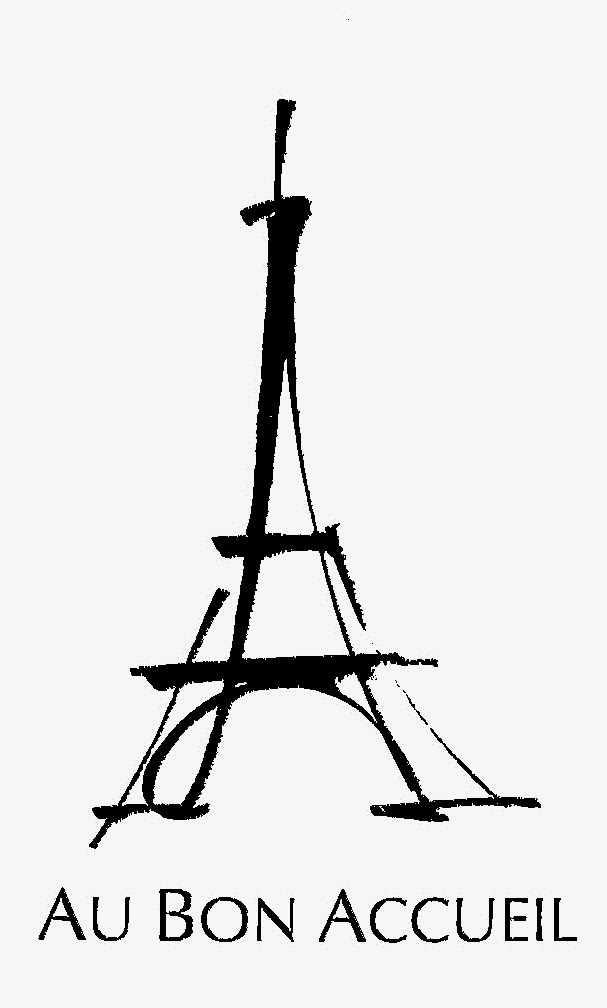 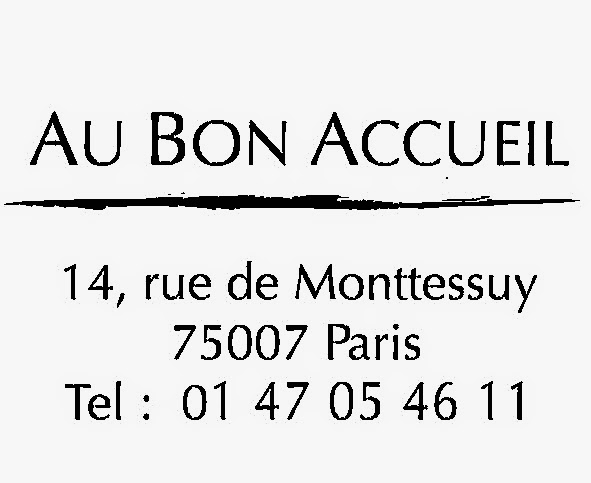 I also apologize for the bad photos of this meal- I really need to remember that there is no better food photography than my cell phone camera - yea! google phone! 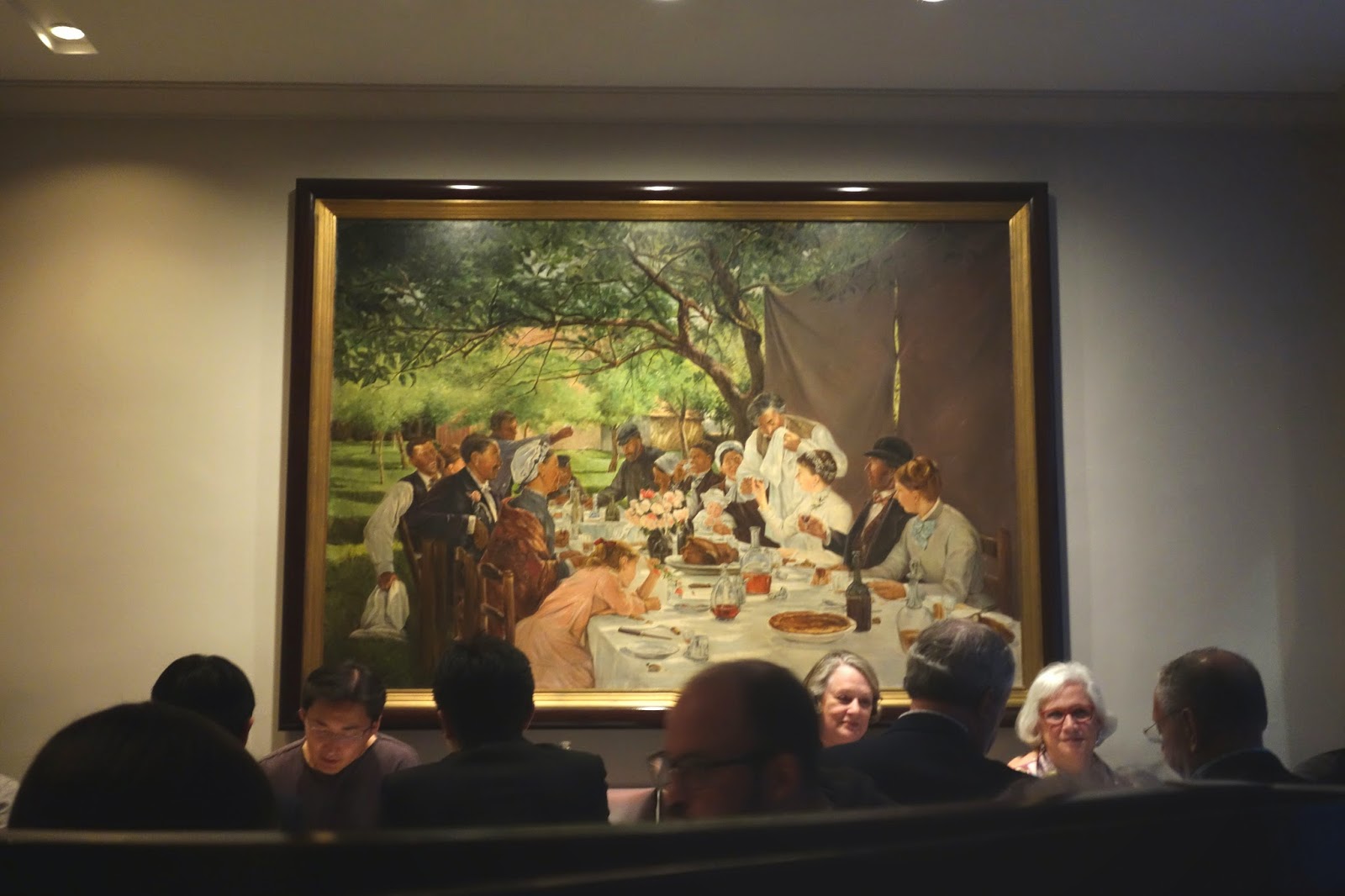 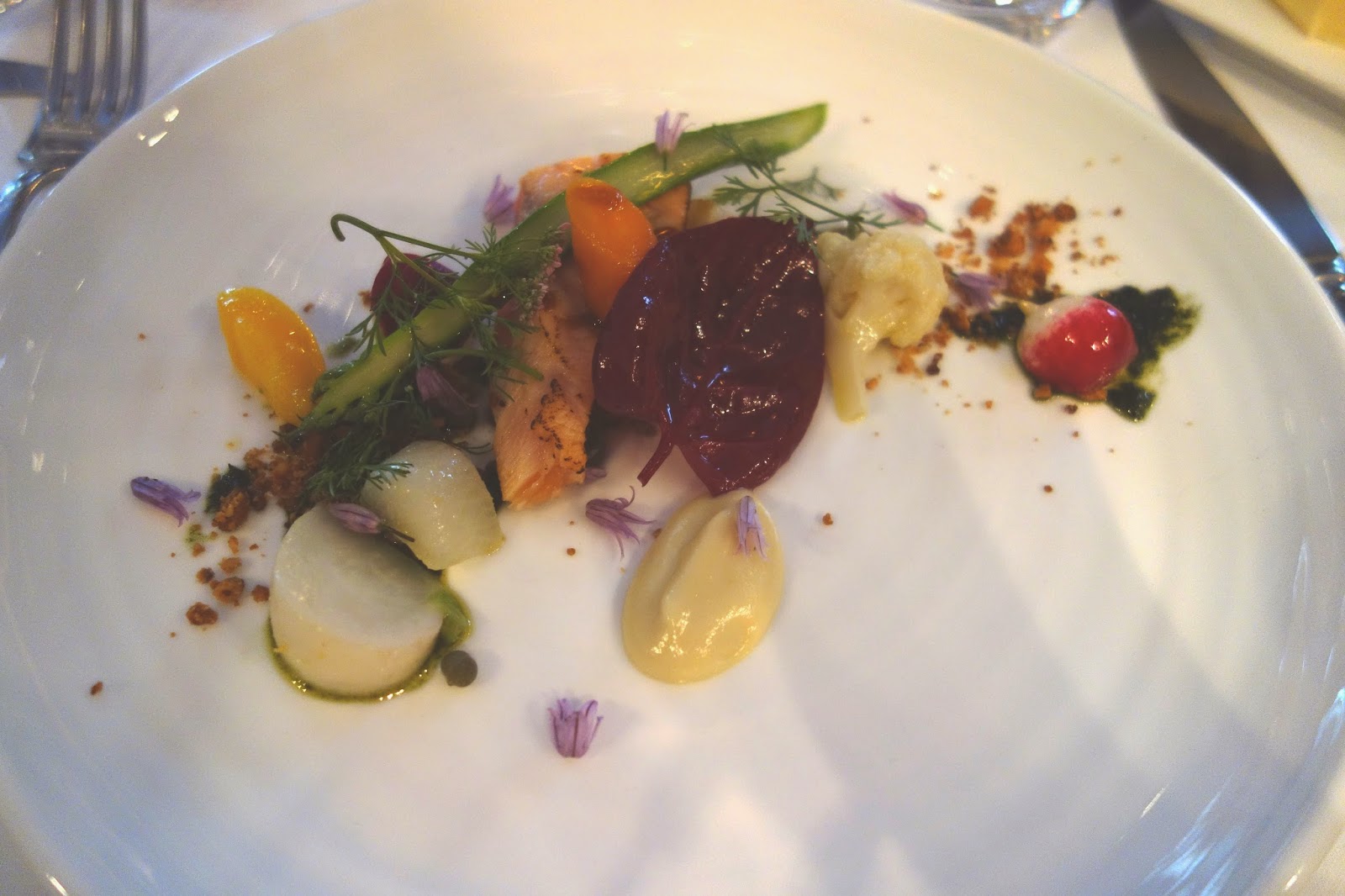 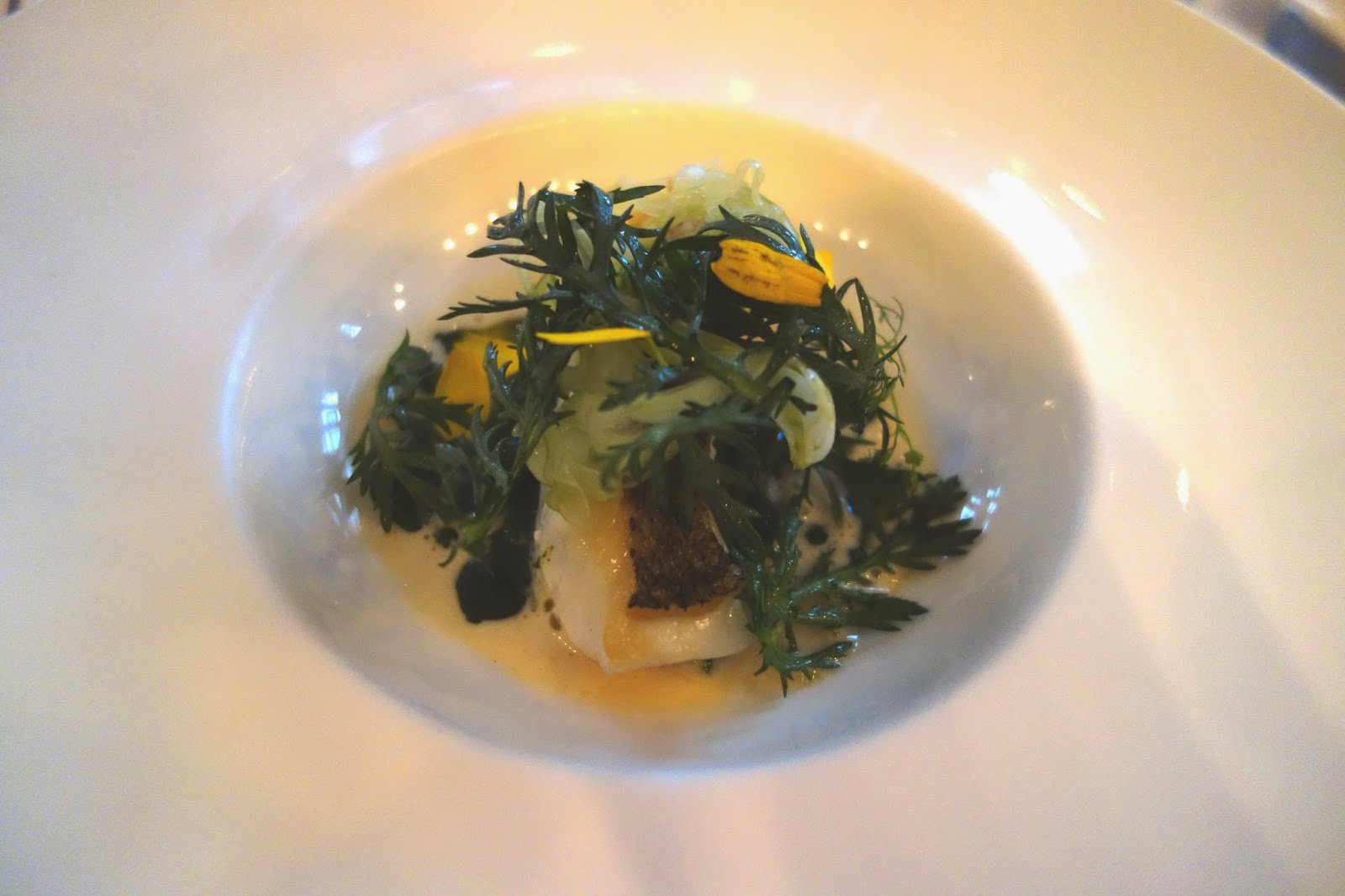 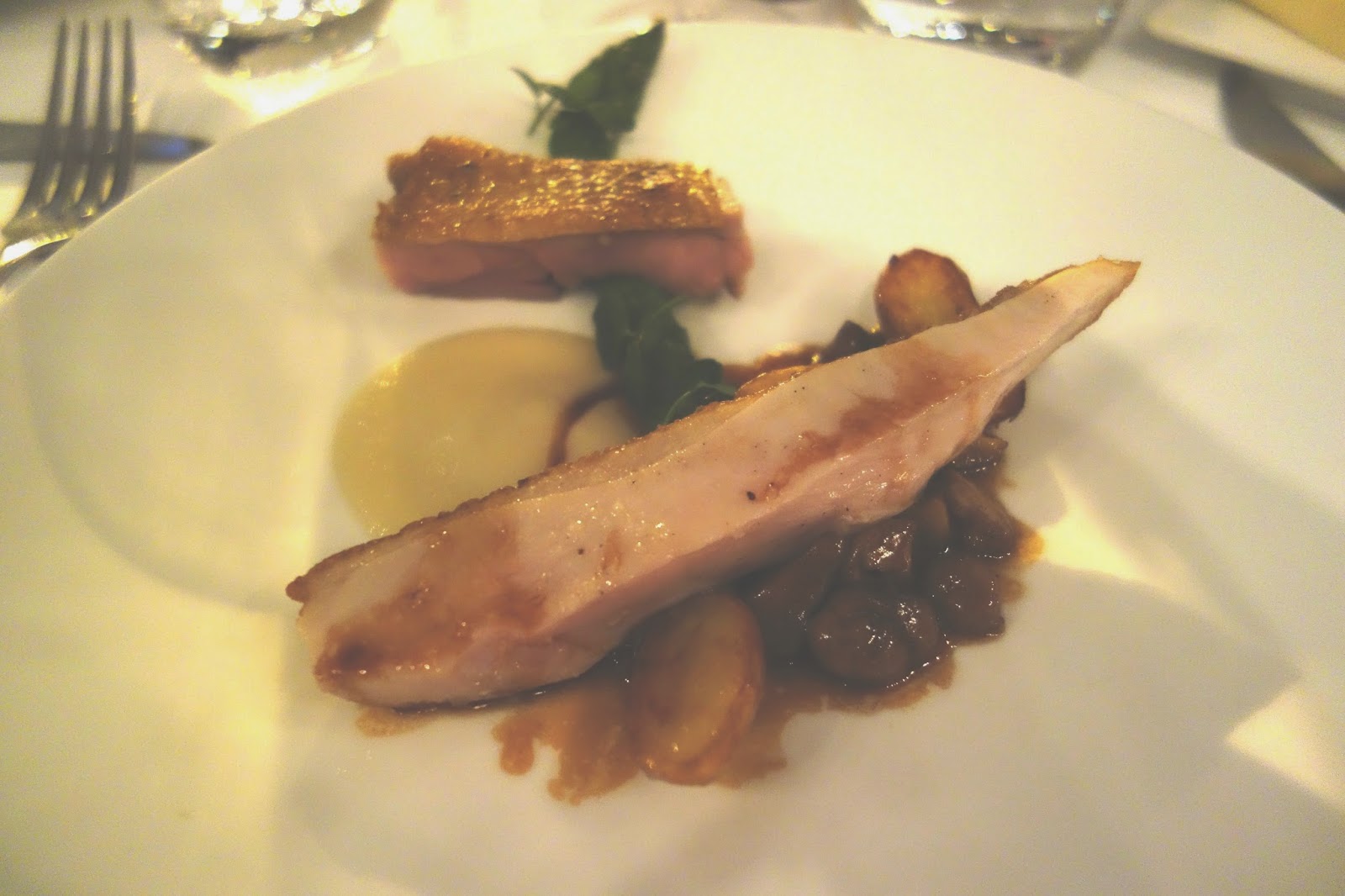 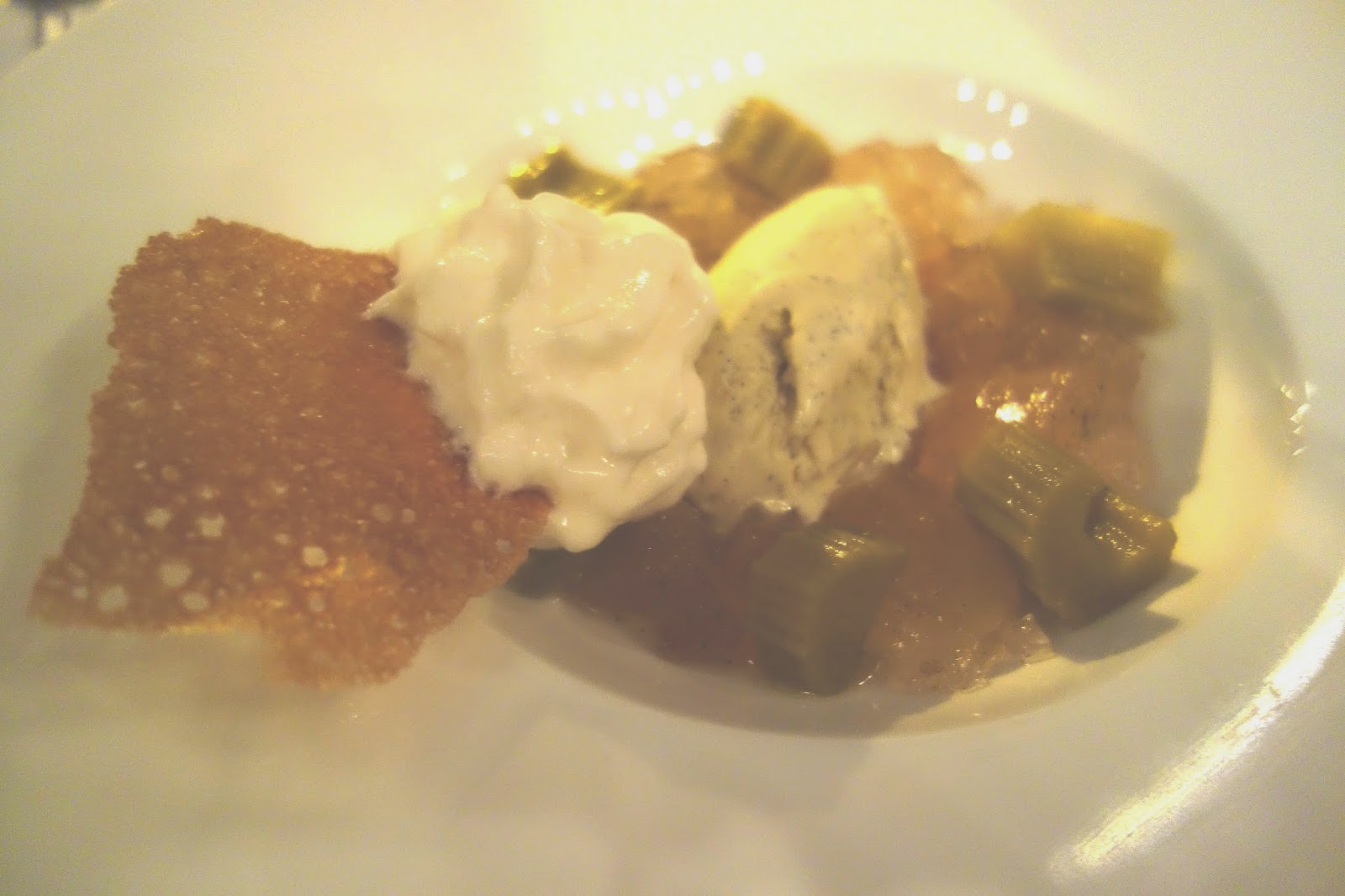 so anyway- onward- the next day and post will go to the d'Orsay and to Montmartre on what turned out to be a sunny Saturday!
Posted by TOR at 3:01 PM