Vermont- in a day!

So as I mentioned we had breakfast at Four Aces Diner on the NH side of White River Junction and it was terrific! I had the Irish Benedict (corned beef hash based- YUM!) and the popovers were fabulous!

We got on the highway and headed into Vermont and to the north and west... all along Interstate 89 it is marked as a scenic route - and this designation by AAA is well deserved, vista after vista of lovely low rise tree covered mountains that must be a riot of color in the fall...

we headed to the capital on our way to the Cabot Creamery...and you can see we had a lovely morning for a drive... 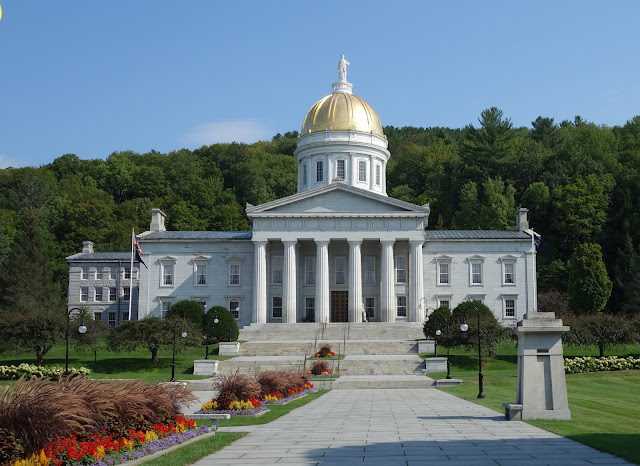 a display table in the video room- 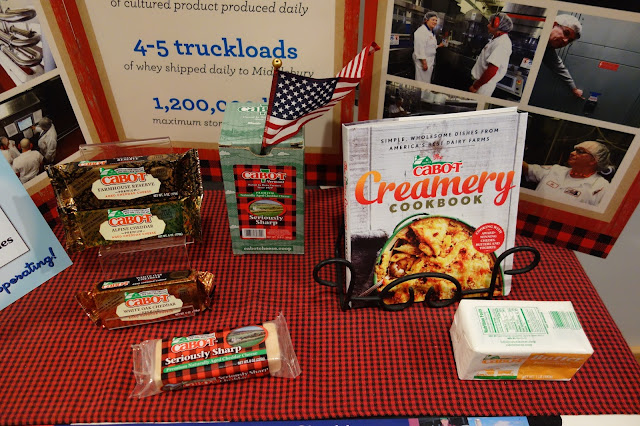 Originally started as Cabot Farmers Cooperative Creamery in 1919 by farmers in Cabot, Vermont, it was taken over by the Agri-Mark Cooperative in 1992. The Cabot village creamery was built in 1893 The original plant had an investment of $3,700 in total, which was paid by 94 farmers in proportion to the number of cattle which each owned. The cooperative started out making butter with the excess milk produced, and began shipping its products south. In 1930 they started making cheese. By 1960, the cooperative had 600 member farmers, though the number of farms in Vermont and across the nation were steadily shrinking.

Following a decline in membership, the Cabot Farmers Cooperative Creamery merged in 1992 with Agri-Mark, a cooperative of 1,800 farm families in New England and New York, and was re-incorporated as Cabot Creamery Cooperative Inc., a wholly owned subsidiary of Agri-mark.

Cabot began marketing cheese internationally in 2007.  Wine Spectator magazine listed Cabot cloth-bound cheddar as one of "100 great cheeses" of the world in 2008.

Cabot has facilities in many locations, including Cabot, Vermont, Route 100 in Waterbury, Vermont, Quechee, Vermont as well as a newly added store in Portland, Maine. Each location offers samples of products from the expansive line of Cabot goods, specialty foods from local vendors, and souvenirs. Additionally, at the Cabot Visitors Center, guided tours are given for those interested. (from wikipedia)

we were told no photos on the tour - but oddly enough that must be a new rule because when I had been there before with Phil and Jeremy and Kate on a full blown Vermont vacation... I had taken some photos - so this is what we saw both times- 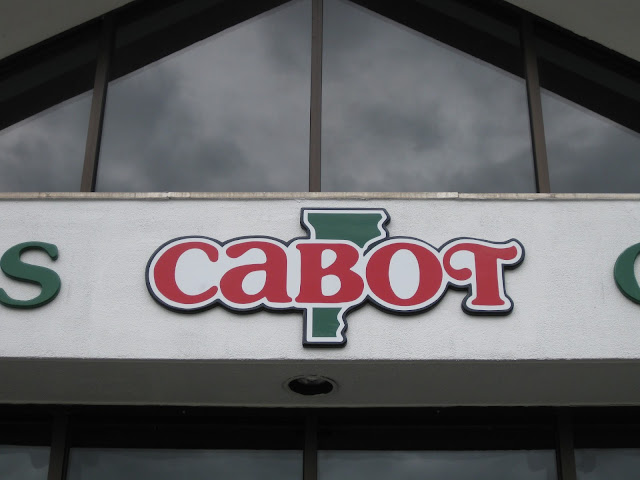 making the curds and then draining off the whey- 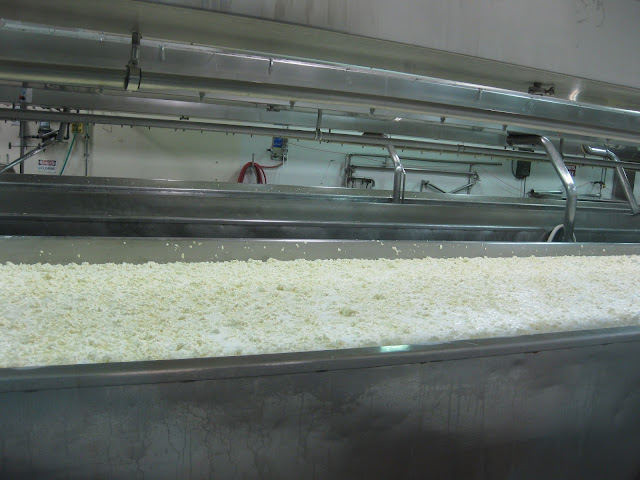 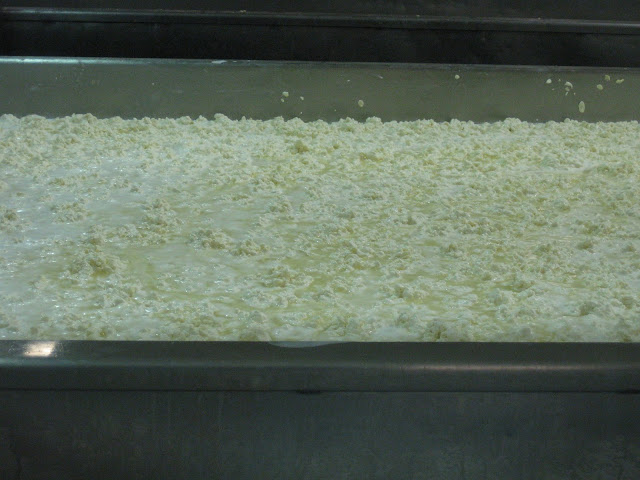 a mural in the plant- 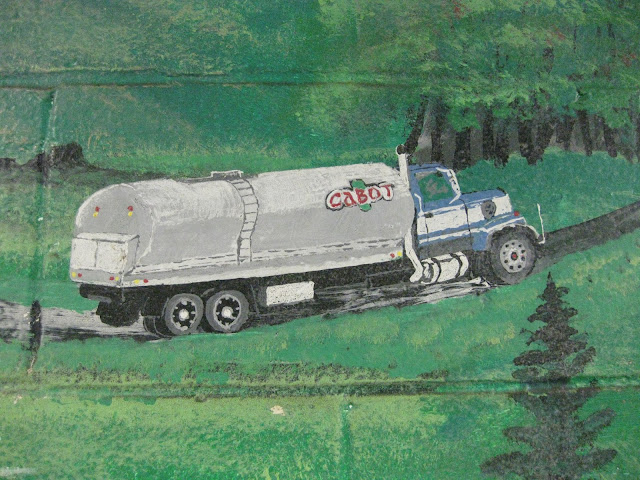 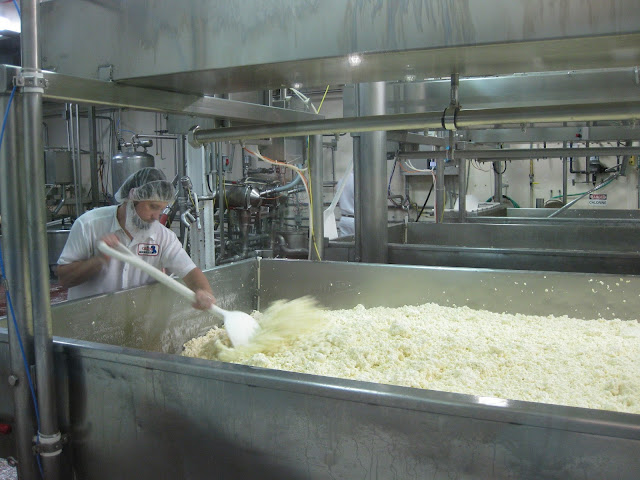 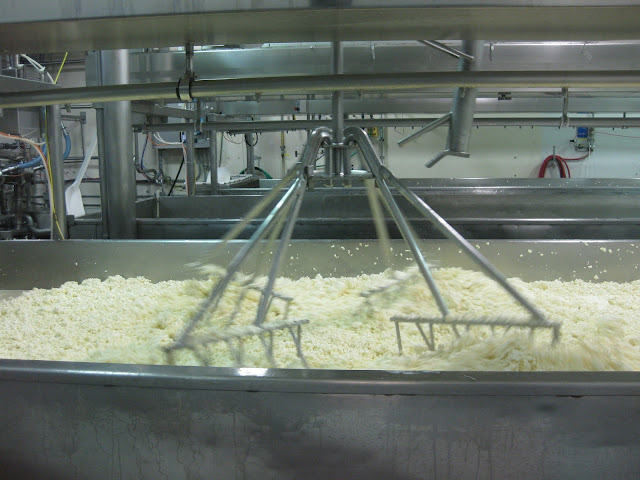 To make cheese the cheesemaker brings milk in the cheese vat to a temperature required to promote the growth of the bacteria that feed on lactose and thus ferment the lactose into lactic acid. Fermentation using homofermentative bacteria is important in the production of cheeses such as Cheddar, where a clean, acid flavour is required.  When during the fermentation the cheesemaker has gauged that sufficient lactic acid has been developed, rennet is added to cause the casein to precipitate. After adding the rennet, the cheese milk is left to form curds over a period of time.

Once the cheese curd is judged to be ready, the cheese whey must be released. As with many foods the presence of water and the bacteria in it encourages decomposition. The cheesemaker must, therefore, remove most of the water (whey) from the cheese milk, and hence cheese curd, to make a partial dehydration of the curd. This ensures a product of good quality and that will keep.

The Cheddar curds and whey are often transferred from the cheese vat to a cooling table which contains screens that allow the whey to drain, but which trap the curd. The curd is 'blocked' (stacked, cut and turned) by the cheesemaker to promote the release of cheese whey in a process known as 'cheddaring'. During this process the acidity of the curd increases and when the cheesemaker is satisfied it has reached the required level, salt is mixed into it to arrest acid development. The salted green cheese curd is pressed to allow the curd particles to bind together. The pressed blocks of cheese are then vacuum packed in plastic bags to be stored for maturation. Vacuum packing removes oxygen and prevents mould growth during maturation.

and as I highlighted above there were samples to try and souvenirs to buy... 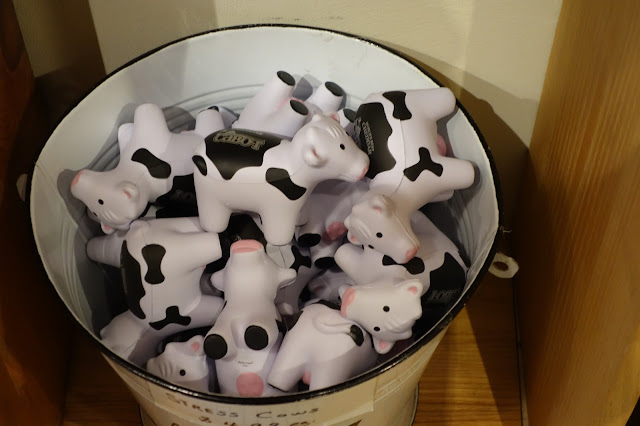 despite numerous- literally hundreds of Moose Crossing signs along the roads we traveled - these were the only type of moose we encountered... 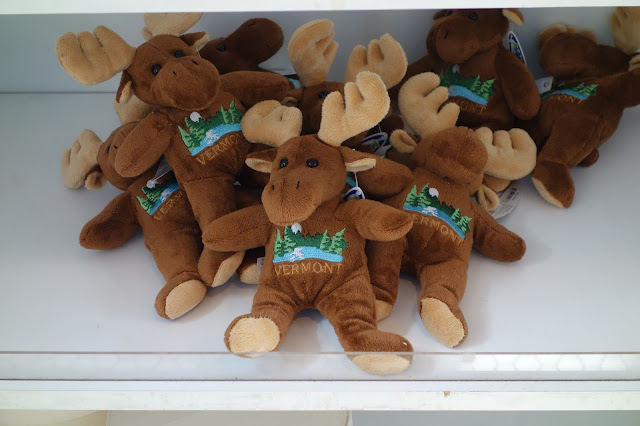 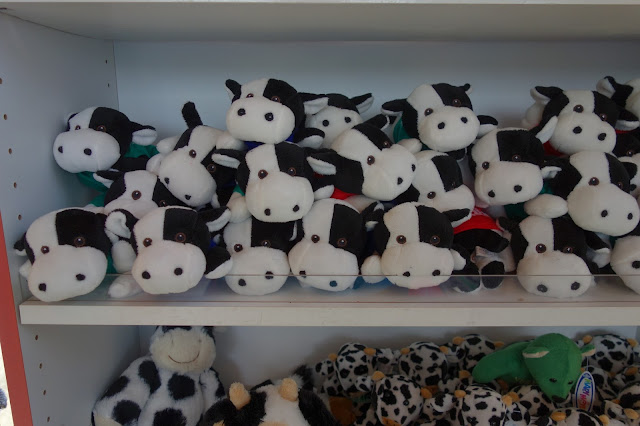 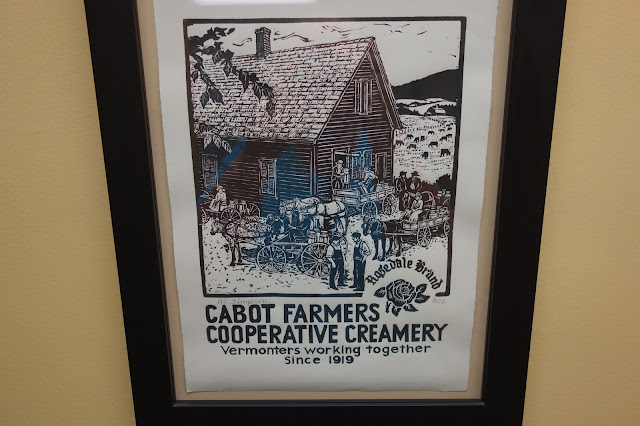 so having had a morning snack - we went off in search of lunch- taking the long way and the scenic routes (green dots on AAA map) to Stowe! where we skipped the crowded town and headed up the hills to - yes you guessed it the Trapp Family Lodge (sing along with me- "the hills are alive! ..to the sound of music!") where we had lunch in a very Austrian like dining room and had food to match... 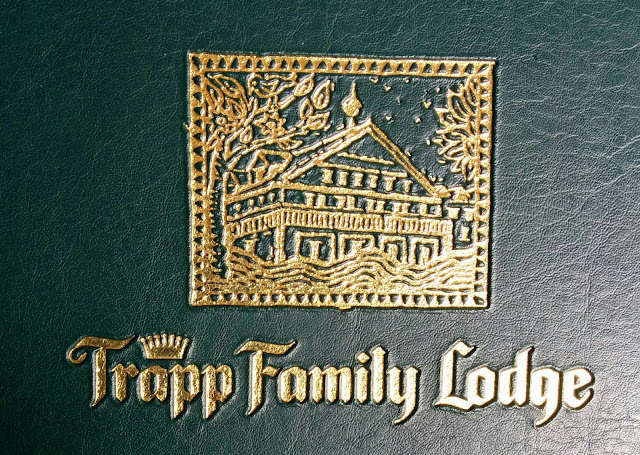 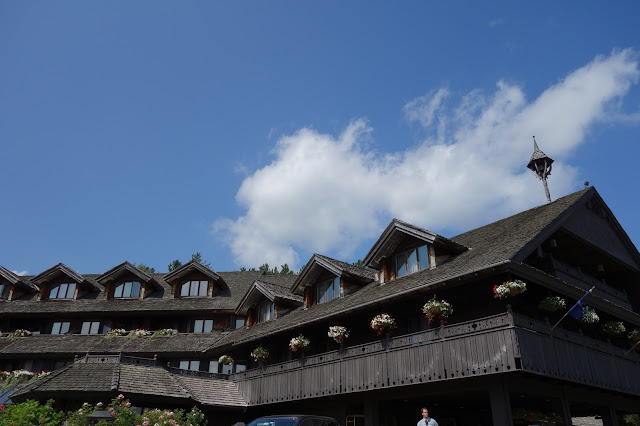 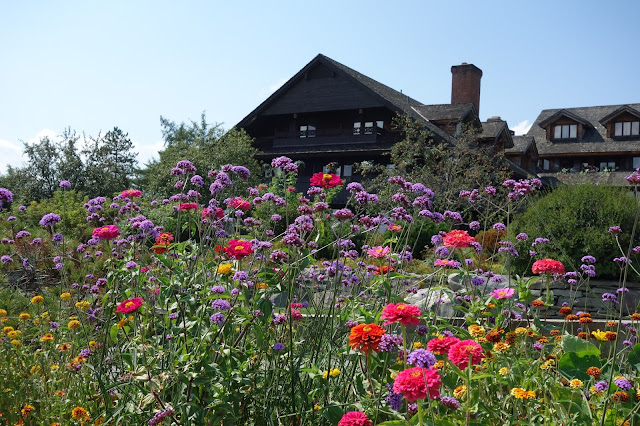 Smugglers' Notch (or Smugglers or Smuggler's) is a mountain pass in Lamoille County, Vermont. The notch separates Mount Mansfield, the highest peak of the Green Mountains, from Spruce Peak and the Sterling Range. Most of the notch is in Mount Mansfield State Forest.  Smugglers' Notch derives its name from activities precipitated by a request of President Thomas Jefferson to prevent American involvement in the Napoleonic Wars. The Embargo Act of 1807 forbade American trade with Great Britain and Canada. But proximity to Montreal made it a convenient trading partner, and the Act caused great hardship for Vermonters, many of whom continued the illegal trade with Canada, carrying goods and herding livestock through the Notch. Fugitive slaves also used the Notch as an escape route to Canada. The route was improved to accommodate automobile traffic in 1922 thus providing a route for liquor to be brought in from Canada during the Prohibition years.

We had specifically chosen this route as an alternative to heading into Waterbury which we decided would be seriously overrun with children on their last Sunday before school started - all desperately in need of a tour of Ben & Jerry's once artisanale (now corporate) ice cream... - so we took a round about route to the shores of Lake Champlain (in Burlington) directly opposite where we had been on DART 2013 in Plattsburgh NY... on the Adirondack DART tour... after a quick driving tour of "downtown" Burlington and a drive by the airport - we headed back south - again along the green dotted route back into New Hampshire to Manchester because we have tickets for tomorrow to see the Zimmerman home designed by Frank Lloyd Wright decided to stay nearby....so stay tuned...
Posted by TOR at 12:45 PM