Today I attended the closing performance of the Sarasota Ballet's 2015/16 season.  The performance was held at the Sarasota Opera House.  They danced three different ballets - one from Wheeldon and two from Sir Frederick Ashton.  Totally LOVED one of the Ashton ballets and really liked the Wheeldon one - the other Ashton had issues.   So I had the full spectrum of reactions to the different performances.  More on that later- first some visual tidbits... all from the program for today's performances- 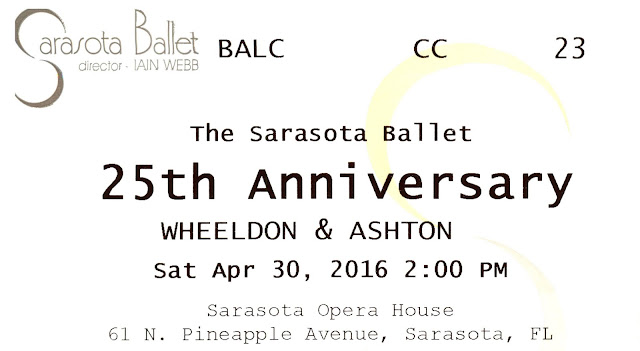 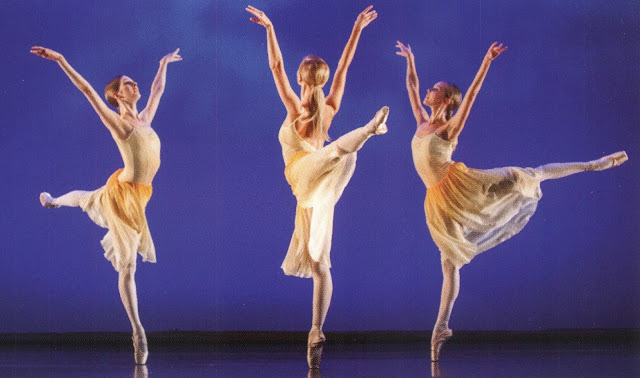 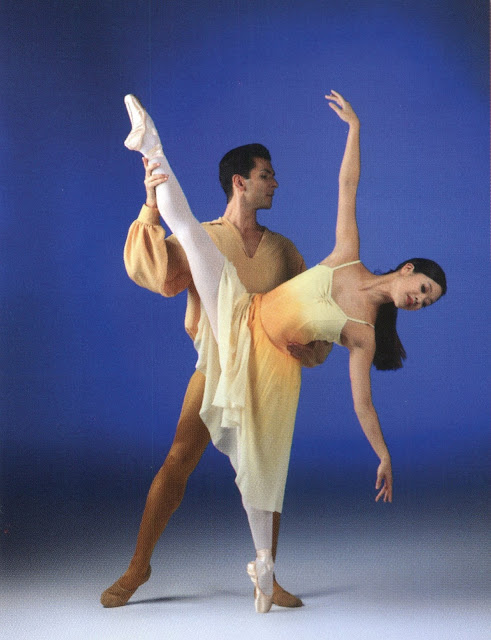 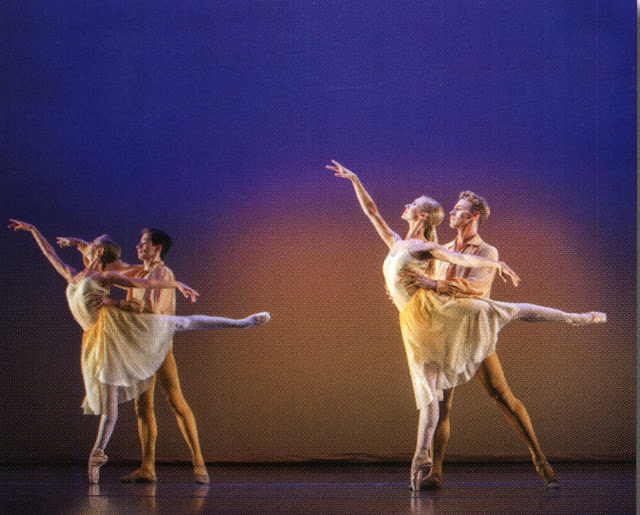 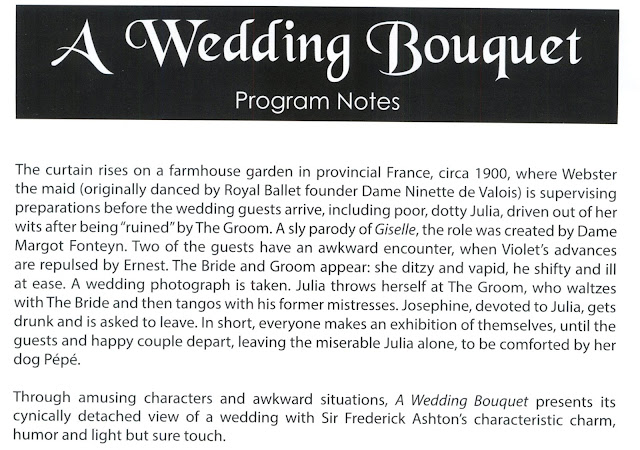 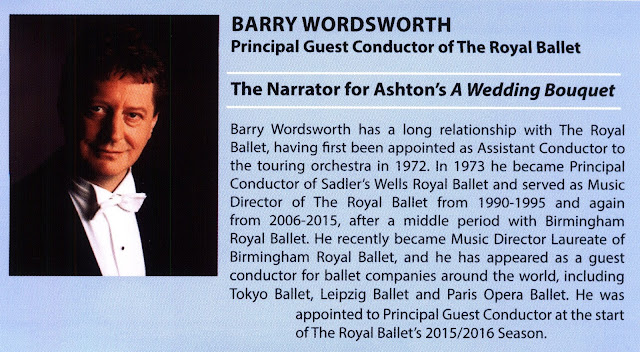 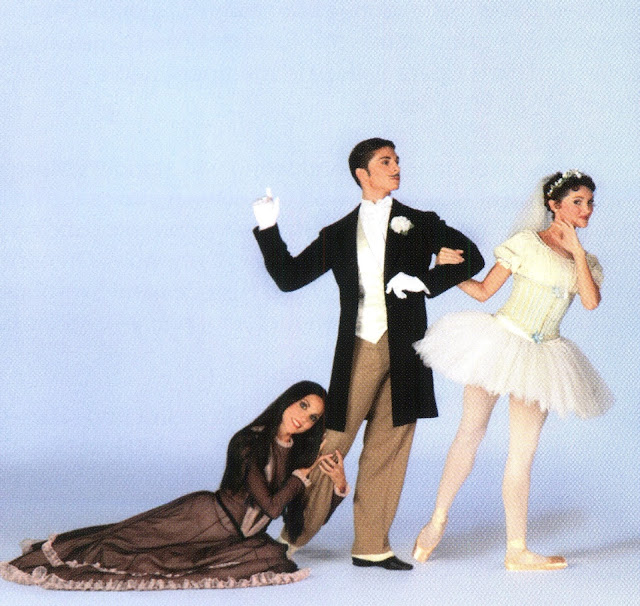 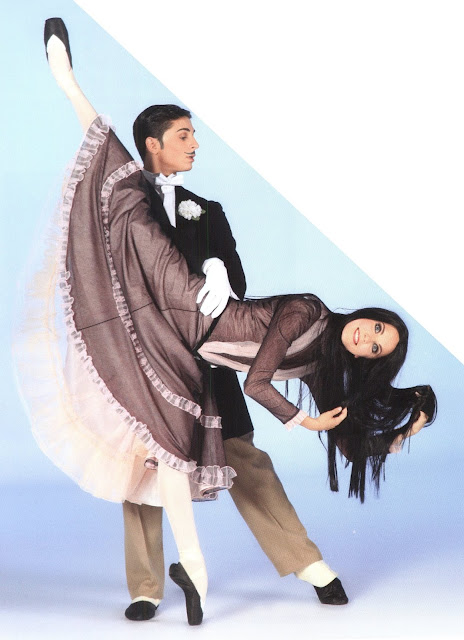 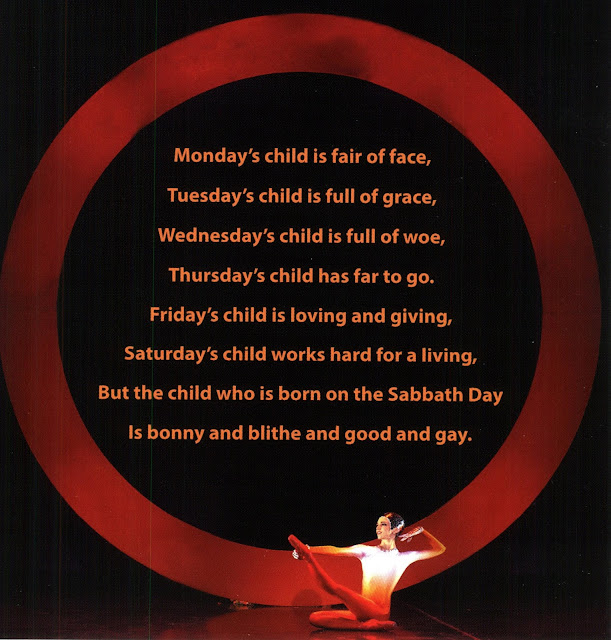 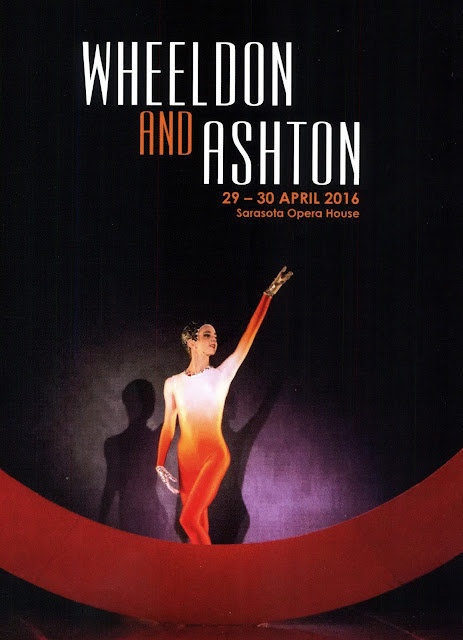 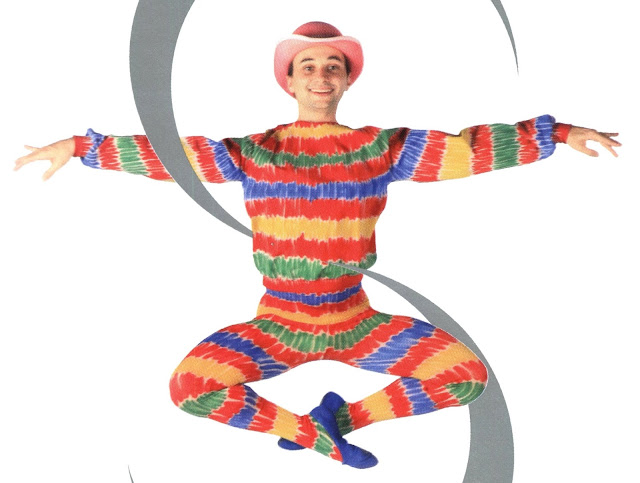 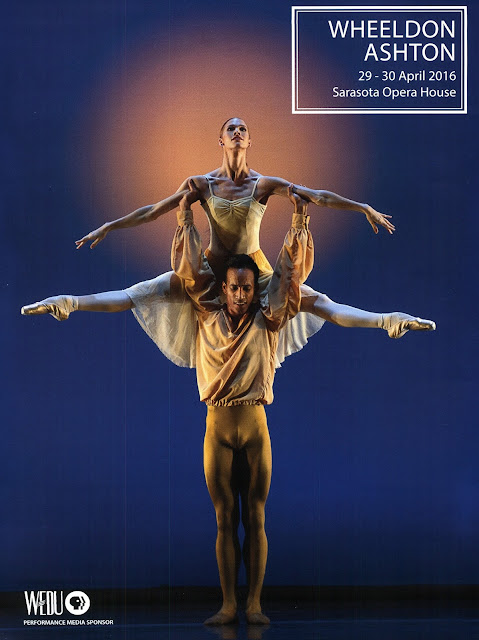 The American was well danced and a lovely performance - with terrific music- no complaints there and a great opening performance to start the program.

The Wedding Bouquet was seriously annoying - and for ONLY ONE reason and that was the libretto. The dancers were wonderful the costumes perfect and the scenery appropriate - but the libretto -first of all why ruin it with a libretto but even more so one penned by Gertrude Stein...that pretentious poseur (wannabee) who has merely the affectation of a poet rather than the talent... just awful! ruining an otherwise excellent ballet. The droning voice of the narrator with his nonsensical repetitions was not to my taste but others reacted more emphatically; I thought the guy next to me was going to leave... his wife made him stay and I think he was very happy he did because he seemed to really enjoy the Jazz Calendar.

another good outing with the Sarasota Ballet - am now planning on getting series tickets next year because there is so little left once the season and series tickets holders buy their tickets - the individual performances have virtually no seats available...


If the Sarasota Ballet’s home season began with something of a whimper, it ended with an unquestionable bang. “Wheeldon and Ashton,” the final program of its 25th anniversary year demonstrated everything the company has become known for under Director Iain Webb: multi-dimensional dancing, technical and theatrical polish, conscientious attention to detail and, of course, the works of Sir Frederick Ashton.
“A Wedding Bouquet,” Ashton’s 1937 ballet about a wedding party in a French village at the turn of the century, became the latest of the British choreographer’s works (that makes 23) added to the impressively diverse repertoire and I think I can safely say, it is like no other. While I got the impression I may have been in the minority – “Didn’t you think it was a little…busy?” said a fellow audience member, searching for a polite word – I found it Ashton at his best: witty yet wise, comic yet caustic, and driven by characters so cleverly choreographed you could swear you knew these people intimately. Juan Gil and Victoria Hulland in Sir Frederick Ashton's "A Wedding Bouquet." /Photo by Frank Atura
Inspired by a scenario written by Gertrude Stein, and with an onstage narration of her modernistic text full of characteristic repetitions, non sequiturs and fractured phrases, it centers on a marriage of convenience between a besotted and vapid bride (Victoria Hulland) and her distraught groom (Juan Gil), increasingly chagrined by the number of his former lovers in attendance at the festivities.
In brief but brilliant cameos, we’re introduced to the eccentric cast, chief among them Julia (Ellen Overstreet), whose obsessive, unrequited, passion has left her in a state of fidgety, semi-psychotic anxiety; Josephine (Danielle Brown), a dotty society dame who over-serves herself champagne and falls, ass-backwards, off a tabletop before being commanded to leave (“Josephine may not attend a wedding!” intones the narrator) and Pépé (Samantha Benoit), Julia’s loyal Chihuahua, who bites at the heels of the heel who has spurned her owner.
It is, indeed, a busy scene, and it would take a second viewing to fully appreciate Ashton’s multi-layered choreography. There are parodies of moments from both “Giselle” and “Les Sylphides,” a pas de deux in which the bride and groom’s incompatibility is underscored by their facing in different directions, and swiftly smooth segues that keep the surface merry while underscoring the acerbity beneath. (“Bitterness is entertained by all,” the narrator repeats.)
Though it was a pity some of the words were obscured by either the eccentricities of the sound system or the volume of the orchestra, the Royal Ballet’s principal conductor Barry Wordsworth -- making his debut as the narrator after listening to countless others fill the role while he wielded the baton – did a spectacular job of matching the rhythmic cadence of the words to the Lord Berners score and the dancers’ movements, amplifying rather than distracting from each.  And while it would be unfair to single out for praise any one of the dancers – the acting and miming prowess was uniformly impressive – it’s hard not to treasure the hilarity of Brown’s credible but overblown drunken antics.
By comparison, the program opener, Christopher Wheeldon’s “The American” -- a visually stunning work to Antonin Dvorak’s sweeping “The American Quartet” -- was all nature, rather than artifice and all genuine, rather than superficial, tranquility. Wheeldon’s choreography mirrors the score, which was inspired by America’s prairies, spilling out over the course of a peaceful, pastoral day in the wheat fields. Known for his elegant, fluid pas de deux, Wheeldon produces another here and Ricardo Rhodes, looking more at ease and unforced than I have ever seen him, and Brown, in another memorable performance, do the adagio movement superb justice, evidencing a trust that allowed for moments of absolute abandon. By contrast,  Gil and Nicole Padilla were spritely, playful and wickedly precise in the rapid-fire allegro.
Ashton’s “Jazz Calendar,” based on the old English nursery rhyme that begins with “Monday’s child is fair of face…” brought the program to a close. With its seven movements representing the days of the week and with almost too-literal interpretations of the rhyme – Thursday’s child (Gil) who has “far to go” spends a lot of time running around and Saturday’s child who “works hard for a living” is personified by (what else?) a bunch of hard-working ballet boys – it is a far more simplistic work than “A Wedding Bouquet,” and veers dangerously close to that “too cute” line Ashton infrequently crosses over.

Sir Frederick Ashton's "Jazz Calendar." / Photo by Frank Atura
Still the brilliantly-hued costumes (originals by Derek Jarman), the peppy dancing and the large, lively ensemble made for a fitting finale. Better even than the dancing, though, was the Sarasota Orchestra’s sumptuous rendering of Sir Richard Rodney Bennett’s marvelous jazzy score, so well performed I was tempted to close my eyes and just listen.
But that would have meant missing the ultimate moments of a season that has been, by all accounts, one to treasure, a year of growth and accomplishment for a company with ambitions that quite regularly exceed its budget. This was a program that, as it should, left you wanting more, a cliffhanger that only amplifies anticipation for what is yet to come.
Other than disagreeing about the Gertrude Stein libretto - I think the review was really fitting for a terrific set of ballets!

so next week we have National Theater Live at the Historic Asolo and then Phil leaves for the summer/fall not to return from Chicago until November.  I won't leave here until late in May with the girls and will return the very end of October.  Lots of things on our schedules coming up - so stay tuned...
Posted by TOR at 8:45 PM