So yes I am back- the last two years were a total bust with COVID fucking up my travel jones - I was almost sent to rehab... the withdrawal was fierce... but 2022 did give me a bit of relief.  After getting the vaccine in 2021 and boosters several times including the new bivalent one for OMICRON... we were were ready for the world to open up - and we had a lot of saved thirst for travel.

her is our holiday letter for holidays 2022-

It's the end of 2022 and time again for the "holiday letter" - year in review - remembering all the good times (or less than good) as we prepare for 2023.

In February we met up with family in Miami. It was the first time we had seen son Jeremy and his partner Kate since COVID lock down in March 2020.  We were joined by brother Steve and sister-in-law Suzanne who were looking for a warm weather getaway from Oregon. We had a fun time there and then S&S came to Sarasota for a few more days of beach time. 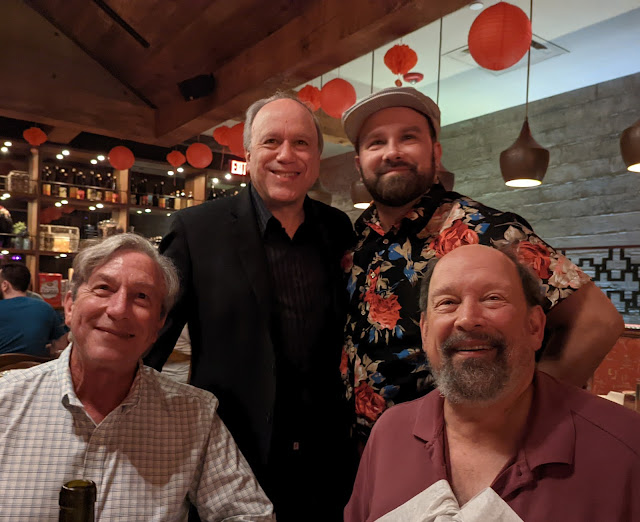 The fun and games were over for a while as on March 9th I had my second knee replacement. It was overdue since I had been walking with a cane for months.  The only late spring activity was the Sarasota Film Festival. We saw several online films and one in person, the terrific documentary on the Automat. 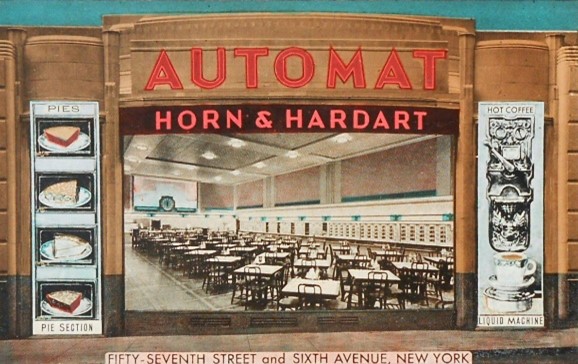 My surgery and rehab went very well, so I returned to Chicago in early May (Phil went earlier).  We right away started seeing friends and dining out. We hit all our favorite places to eat. We tried new places (a shout out to Obelix in this category!) and prepared for travel abroad. We both wanted to get back to traveling and by May, we had two rounds of COVID vax and two boosters each.

I saw ten days on the calendar in late May and snapped into action. Found a consolidator with cheap (relatively speaking) business class to Brussels. Since we hadn't been there in several years, we booked the trip. 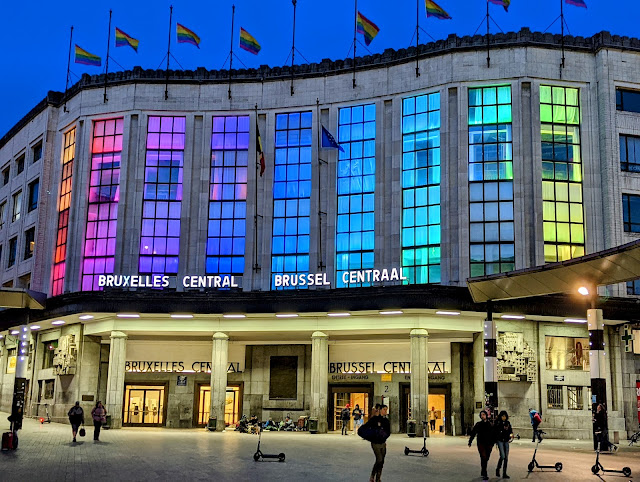 We added on Paris to revisit old haunts and spend a bit of time with our friends Laure & Arno (who had returned home to France a few years back after stints in Chicago and New York City.)  It was a lovely ten days. I was practicing walking on cobblestones with my new knee (slowly but steady.)

We found a couple of new "must go" places to eat in Paris, walked the Promenade Plantee, returned to favorites in Brussels, as well as trying new, and in general just enjoyed being able to GO after the two years plus we had given up to COVID. 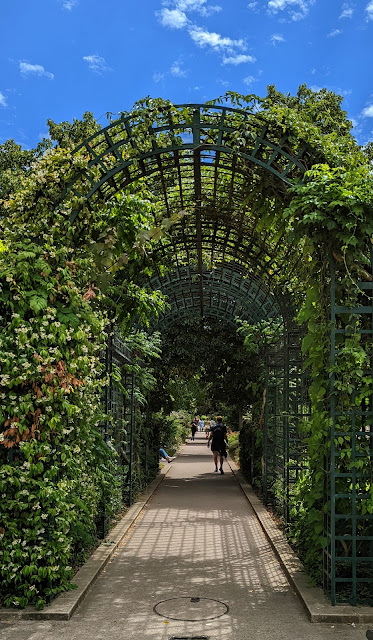 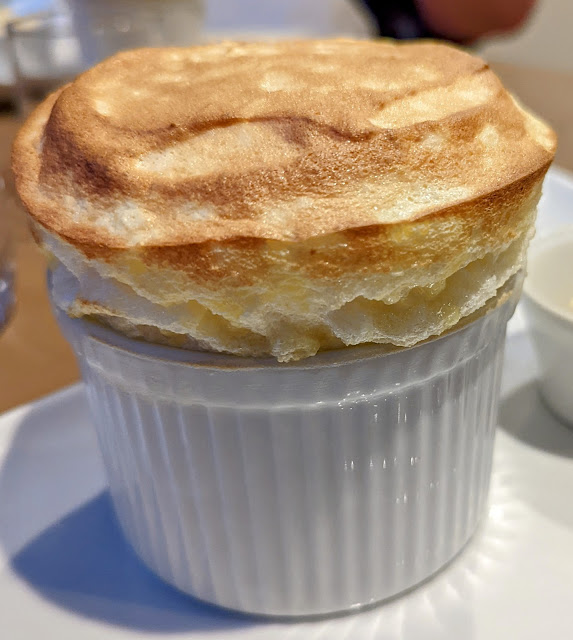 When we tested for COVID to re-enter the US. The night before our return flight, Phil's apparent seasonal allergies turned out to be COVID and I was non-symptomatic (at that time, but a positive test as well.) Bottom line, we couldn't go home.  So, we snapped into action and after re-booking our flight back to Chicago, booked a week in Amsterdam.

We had a great time in Amsterdam, spending most of it outdoors.  We hit old favorite restaurants (many of which suffered from the same staffing issues we saw in the US) and tried some wonderful new places too. 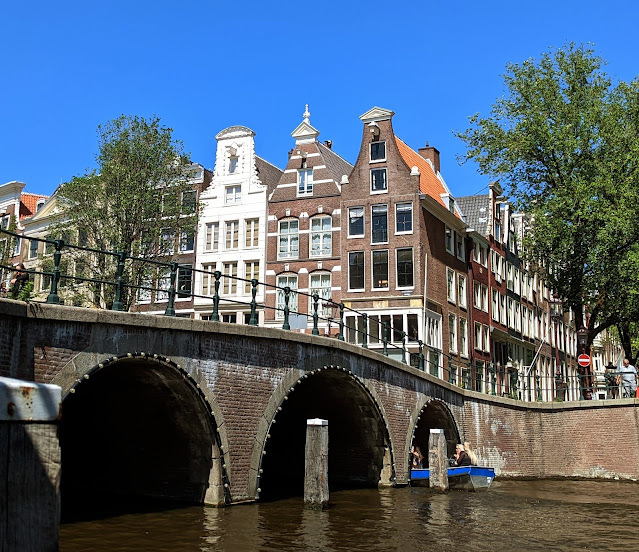 We got back home as rebooked, after the requirements were lifted for vaccinated citizens. We did have to miss a few planned get togethers while we "languished" in Europe but we made the sacrifice.

Our trip to Scotland, three years in the making, finally arrived in July. We both fell in love with the Highlands. Absolutely magical.  We had been to Edinburgh once years ago, but this time we were able to enjoy it in depth. We had several stupendous meals there, with the top two being Azile and Kitchin.  Following closely was Noto.

Daughter Angela and her hubby Lee met us for a long weekend in Edinburgh after we finished our trip to the Highlands.  It was great to catch up with them. And during that time together we made our first announcement of our impending plans to move our winter home from Florida to a European location. 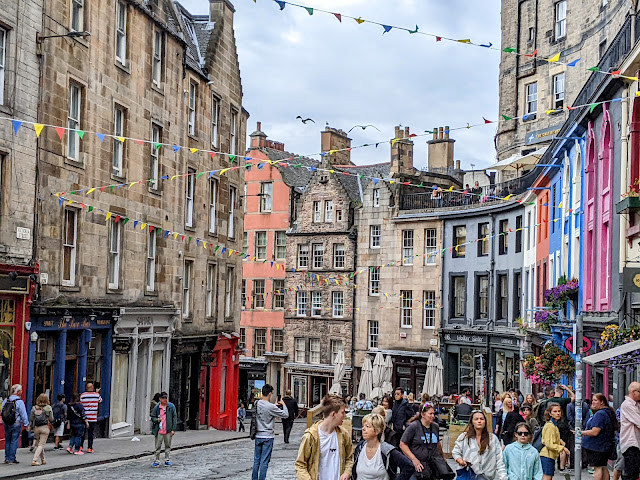 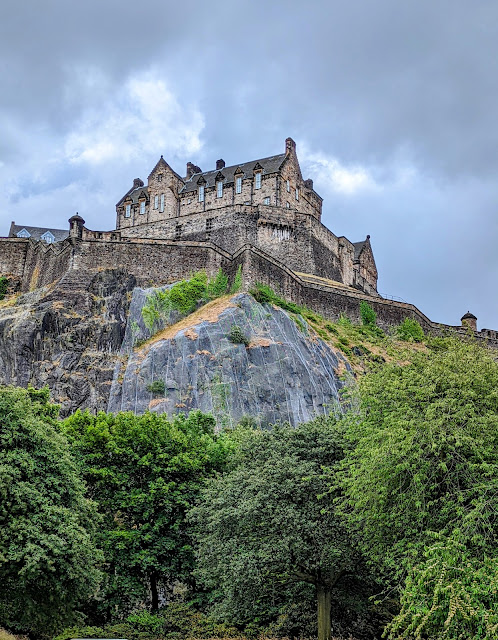 Much more walking and fewer cobblestones in Scotland but my knee was still in rehab mode, so while I was getting a bit faster and gaining stamina I hadn’t reached full extension in range of motion. (Yet!) 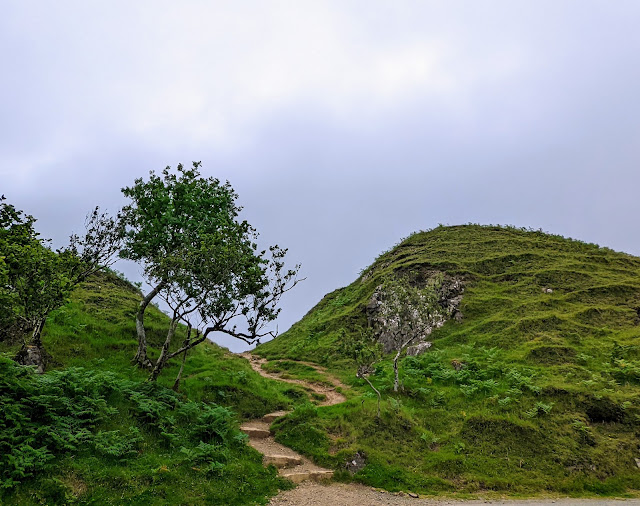 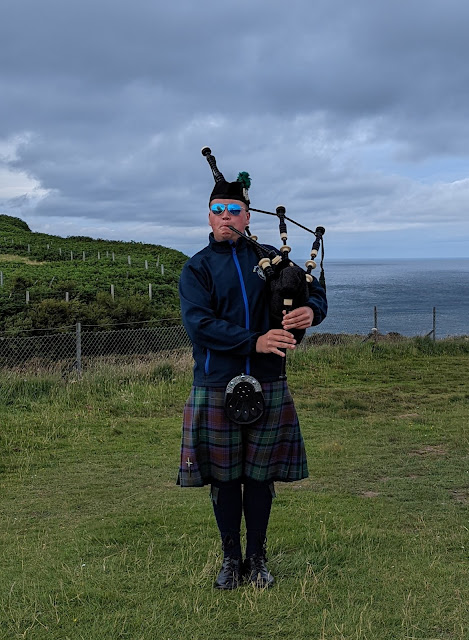 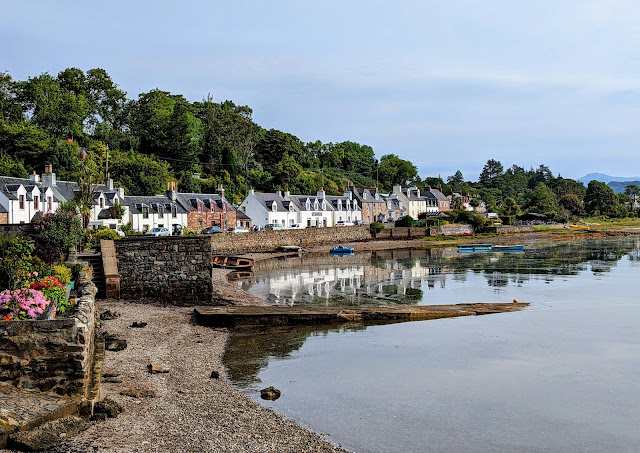 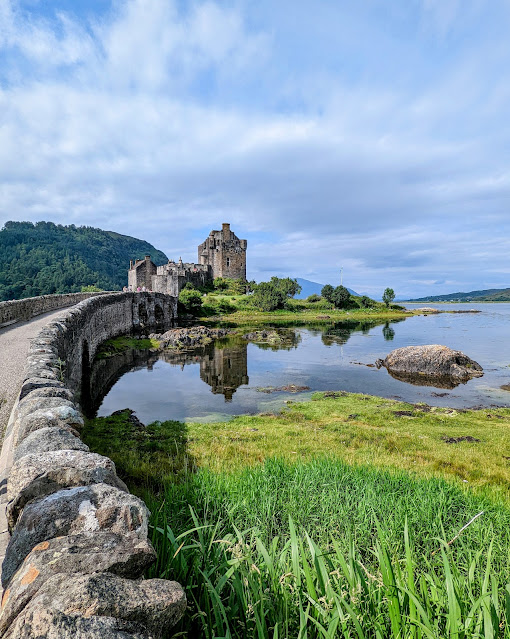 We returned from Scotland the end of July and fit in a lot of social plans for two+ weeks and then Phil took off for another music trip to Ireland while I did a road trip with my travel buddy Tom. This year we drove completely around Lake Huron, the Georgian Bay, and Lake Erie. Both Phil and I had great trips. 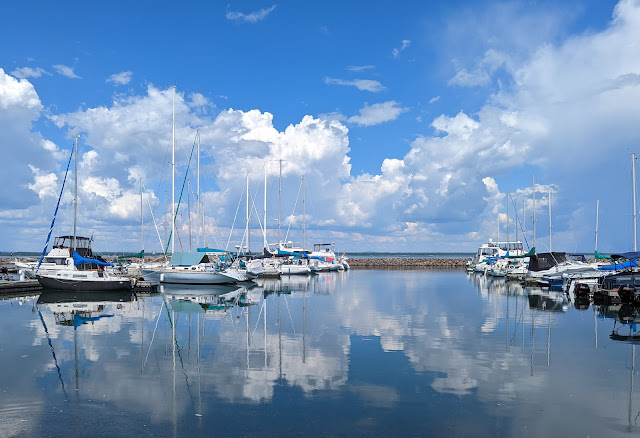 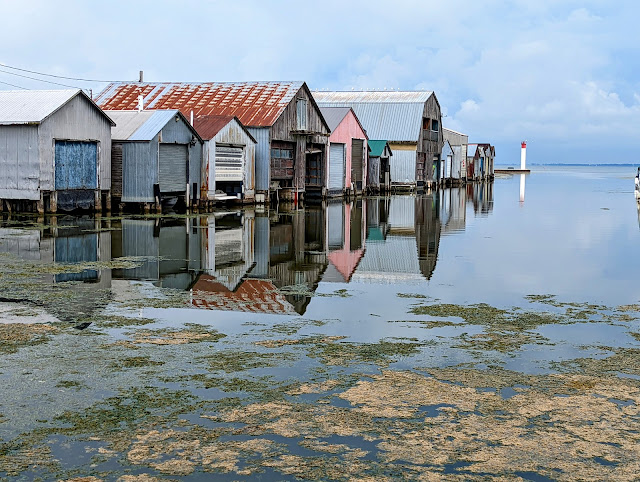 We were back in Chicago by Labor Day. The following weekend Phil went to St Louis for his 50th high school reunion (GASP!) and to see his mom (93) and other family members.

We squeezed in a lot of social engagements between that and the end of the month when we went to New York City & Philadelphia (to see son Jeremy and partner Kate. ) We were struck by the change in New York restaurants - places we'd usually be in the thick of the evening with a 9:30 or 10 PM reservation were now cleared out by 10:30! For night owls like the two of us, this was not a positive development. However, we did try some wonderful new places. 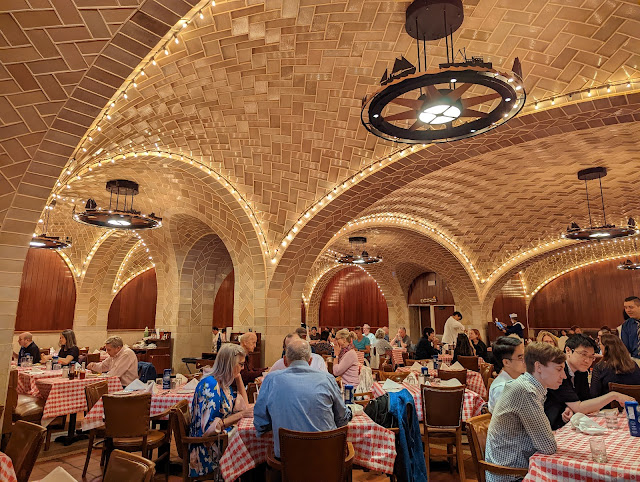 Our visit with Jeremy & Kate was wonderful. We got to see Jeremy's two buildings (following in his dad's footsteps), had a couple of excellent meals, and saw the Barnes Collection at long last. All during the weather aftermath of Hurricane Ian. 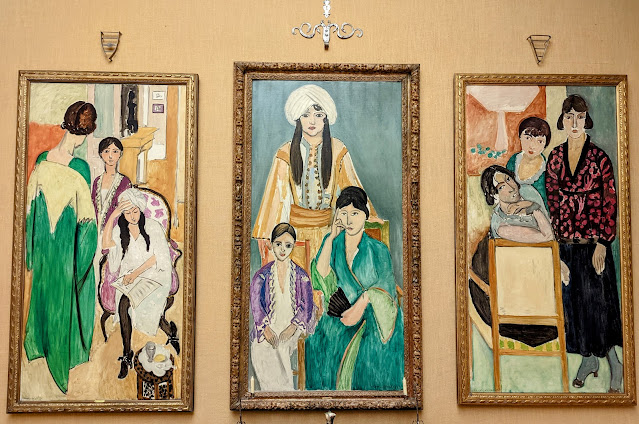 The hurricane missed our Florida place (at the north end of Sarasota Bay) but high winds downed a tree on our Florida room and a branch penetrated the roof so we await repair (we're on the list ) but meanwhile have listed the condo for sale. (See further news below.)

I returned to Florida in late October and Phil was here by November 1st. We had Larry up from Miami for Thanksgiving. Friends Mike & Leslie came for a few days in early December, followed by a visit from our Chicago trainer Leslie in the second week of December.

We went to visit our non-profit of choice, the Center for Great Apes, at their first open house since COVID. The sanctuary serves its residents and is not open to the public except on two days of the year when donors can come to visit. It's wonderful to spend the day with these amazing and resilient creatures - many of whom have backgrounds of abuse - in their nearly idyllic habitat in central Florida. 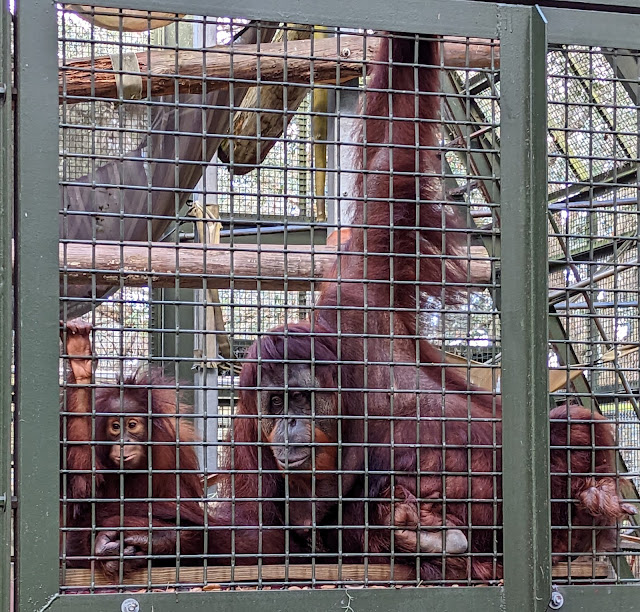 We are headed to Miami for the Christmas holidays to spend a few days with brother Larry.  After that our friends Lee & Nick are coming for a couple of nights before we exit 2022.

Exciting plans for us for 2023! First - we are heading to Sevilla mid-February for six weeks of Spanish language immersion classes. Then we will spend time traveling along the southern coast and around up to Valencia checking out potential locations for our winter home for next year.

Phil and son Jeremy are headed to Ireland for a music trip in June.  Travel buddy Tom and I are headed back east this coming summer, likely to finish our Great Lakes touring and heading further out towards the Atlantic.

I'm sure we'll find some time for a summer getaway but as of now (December 2022) we have no firm plans. We do have a place booked in Spain for December, January, and February (in case our visa application is more cumbersome than expected) but hope to add on more time so we can do some European travel, as it's been years since we were in the Dordogne or the Cinque Terre.... So many places - so little time.

As our 13 years of wintering in Florida come to a close, we are both ready to move on to new adventures. Wish us luck with learning a new language   It should keep us on our toes!

We had some great times in 2022 and here are a few pictures to remember the year by: 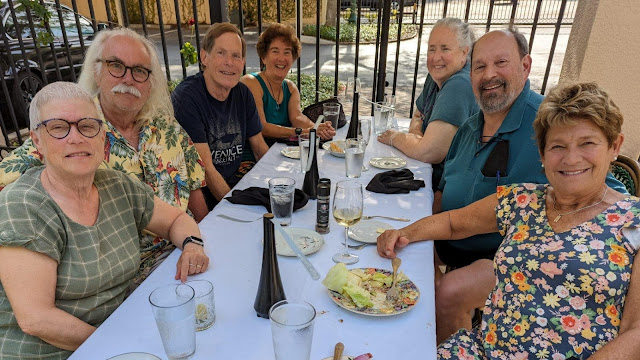 College friends get together at Richard & Irene’s: 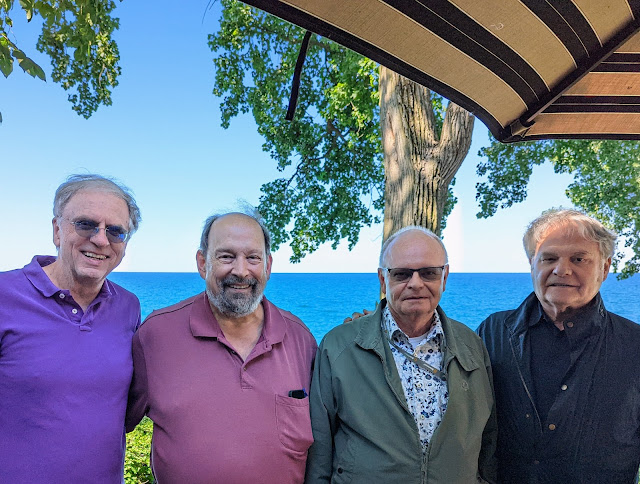 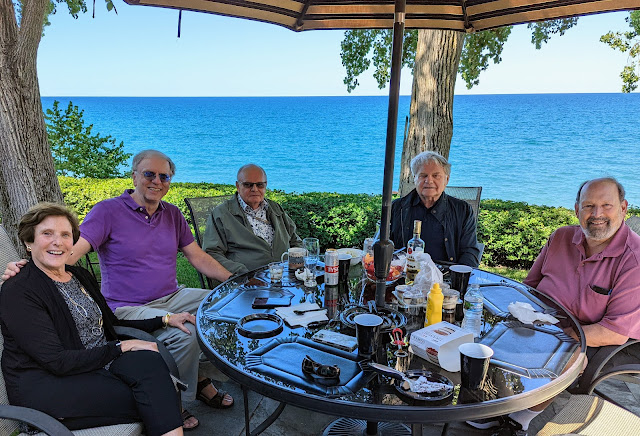 So as the year comes to a close - and at this point pretty much everyone we know has had COVID, no matter how careful they have been - we send our best wishes for you to stay safe, healthy, and happy. May you have a year of peace, prosperity, love, and abundance. 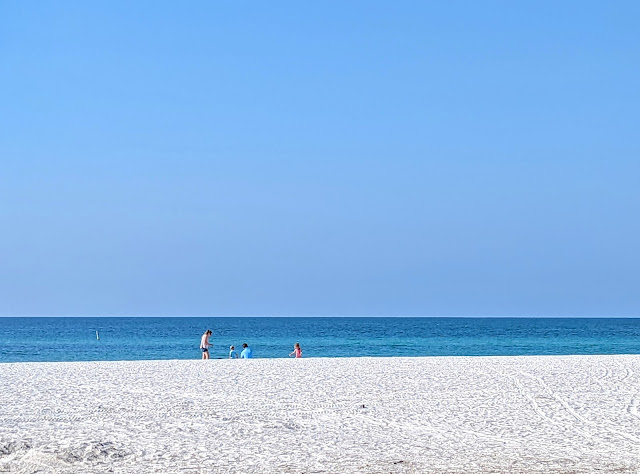 One last view of our beach for the last 13 winters, as we head on to the next big adventure!