and a lecture today.  the lunch was designed to accompany the lecture called "Appetite for Africa" given by Professor Robert Launay from Northwestern University.  friends Sheila and Mary invited me to go about ten days ago and it sounded interesting- for a couple of reasons.  first of all I really know nothing about African food and secondly since I am going to Africa next year I thought this might give me some ideas of what to expect.

I quickly learned that this was only west African food not food from all of Africa. however the presentation was interesting and the menu for the lunch - drawn from both actual dishes from the region and some inspired by the regional cooking was excellent. 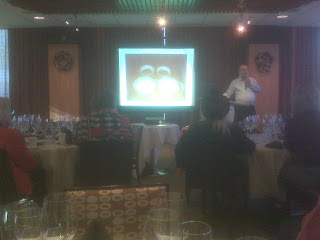 we had six courses, some of them are memorialized in really awful cell phone photos from my blackberry- sorry- didn't even think to bring my camera

we started with Akara - bean cakes made from black eyed peas- they were fried to a crispy outside and looked a whole lot like falafel- they were served with a sauce that had some kick to it. 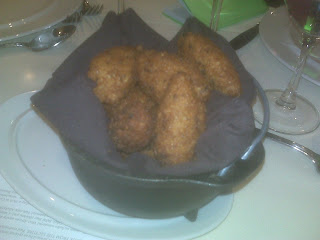 then we had a fish course with a wonderful lemony-savory sauce served over Attieki (fermented manioc) which was also really tasty. 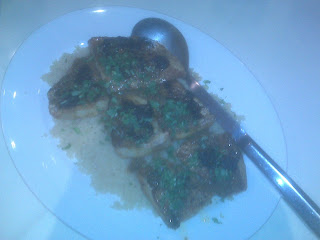 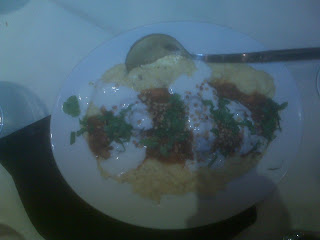 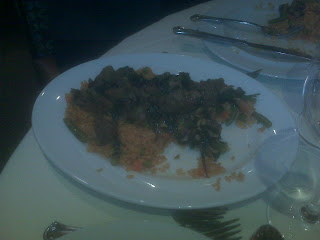 the sweet at the end was fruit over a couscous like scoop that had been sweetened with honey. 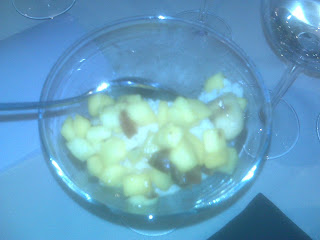 by the end of the lunch - which was served with two South African wines by the way- we were well sated.

so again while I apologize for the photo quality - I did learn my lesson not to rely on cell cameras - it was a worthy endeavor and excellent meal!
Posted by TOR at 5:27 PM