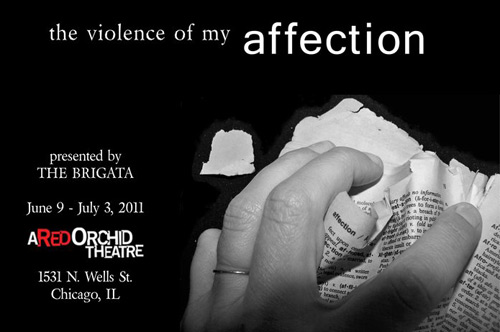 Went last night to see The Violence of My Affection at the Red Orchid on Wells Street.  I found it a fabulous exploration of the opposing forces of intellect and emotion.   The bare bones plot – an academically inclined young man, Steven, meets a passionate young actress,  Sofania, while studying in Italy, their relationship from courtship through divorce is charted in a marvelously structured narrative that relies fairly heavily upon the audience’s capacity to follow along intellectually.  (The title of the play comes from Jane Austen.)
The young woman who plays Sofania more than met the challenge of the emotion laden role, demonstrating delight in new love through the madness of love scorned.  And while she was clearly the “star” she had a “co-star” in the script by Gaetano Marangelli.  The dialogue of the characters both internal and external  folds back upon itself repeatedly in an elegant structure that allows Shakespeare to be quoted frequently and references the “A”s and the "V"s of the dictionary that plays a central role in the story of the couple’s unfolding love, and then its demise.
My comment after the play ended was “that poor woman” and Phil’s was “I hated her.  I would have run as far away from her as possible.  What did he do to her to deserve that?”  And I suppose therein lies the crux of the matter.  I felt her passion and understood her inability to fathom the lack of the same from her “betrothed.”   I was drawn to the references and structure of the play and Phil found them confusing.
Perhaps the most valuable lesson I learned in graduate school while studying psychology was the owning and acceptance of projections.  Fritz Perls could have helped Sofania understand that her relationship to Steven was not the relationship Steven had/has with her and never was, but alas that is the subject for another exploration of life’s issues.
For an intellectually stimulating 90 minutes- go to the play.  If you want spoon-fed Hollywood simplicity then stop into the movie theaters around the corner at Piper’s Alley. But if you want to experience participating with poets and dreamers and passion then this is the play for you.
here is the blurb from the promotional materials:


The Violence of My Affection tells the story of the shared passion for art, language, and each other that unites an Italian actress and an American scholar. She adopts his country and raises their son, but after twenty-five years, he wants a divorce, and her love turns to vengeance.
Posted by TOR at 6:23 AM