my husband lives and dies with his hometown team - the St Louis Cardinals... and of course he has many friends who don't understand how baseball can be THAT alluring but last night his team brought more than one grown man to tears as they battled their way to a win that will keep the world series going one more game.

but this was an historic game and to give a flavor I will excerpt from this mornings WSJ: 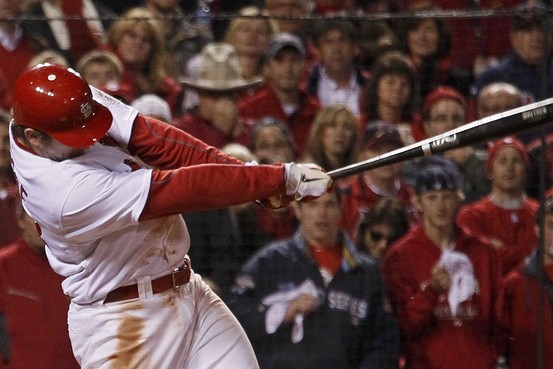 ST. LOUIS—Yes, it's corny, but it really was one of those games that grandparents will be telling their grandchildren about decades from now, a game that had people who had been watching baseball for three-quarters of a century saying they couldn't believe what they had just seen.

In short, the St. Louis Cardinals would not die. Two runs down and one strike from the end in both the ninth and 10th innings, the Cardinals staged two of the most stunning comebacks in baseball history and set up David Freese's dramatic, game-winning, walk-off home run in the bottom of the 11th inning to defeat the Texas Rangers 10-9.

it's hard to believe that anything that will take place Friday will top the series of wild, game-saving hits and clutch home runs that unfolded over four hours and 33 minutes of baseball Thursday night at Busch Stadium beneath the city's iconic arch.  "I have been watching baseball for 70 years and I can't remember ever seeing a game like this," said a nearly speechless Commissioner Bud Selig when it was over. "Only baseball could deliver something like this."

It's true. There was no clock that was running down, nothing that could stand in the way of this freakishly gritty Cardinals team but a final 27th out, and then a 30th one.  "This is better than the three home runs I hit the other day," said Cardinals slugger Albert Pujols whose double began the ninth-inning rally. "This is what baseball is all about."

It was a wild game filled with errors, misplays, clutch home runs, and emptying bullpens even before the real madness began in the bottom of the ninth inning. The Rangers could practically taste their first World Series championship, and they had their lights-out closer Neftali Feliz on the mound. But then Freese's two-out, two-strike triple blasted off the right field fence to score Pujols and Lance Berkman to tie the game. Freese somehow caught up with Feliz's 98-mile per hour fastball, sent it over the head of Nelson Cruz and gave the Cardinals life.

With the score tied at four in the seventh, the Rangers appeared to pull away, Adrian Beltre and Cruz crushed back-to-back home runs to start the seventh inning to give the Rangers a 6-4 lead. Beltre blasted a 1-0 fastball over the fence in right-center field. Then Cruz stepped in and crushed a hanging breaking ball into the third deck down the left-field line. With two outs and Derek Holland on second, Kinsler drove a single to center to give the Rangers a three-run cushion that almost looked safe.

Not even close. Allen Craig cut the lead to two in the eighth. Then the Cardinals loaded the bases, a warning shot of sorts. They weren't going to go quietly, even with Feliz, one of the game's elite closers, set to come on.  "This team just never gives up," owner Bill DeWitt said. "I never counted them out. It's the greatest baseball game I've ever seen."

Sitting in his suite, Cardinals general manager John Mozeliak, said he was stoic, even as the end was a strike away. "No matter what, until we get our last strike, we do not quit."

No, they don't. They were 10-and-a-half-games out of the playoffs in August but stormed back and qualified on the last night of the season. Then they faced down Roy Halladay, the game's best pitcher, on the road in Game 5 of the Division Series.

And yet, there is still one more game to play. Everyone has to come back here Friday afternoon, start all the routines all over, and give glory a shot one last time.

So again tonight my husband will be on the edge of his seat- willing HIS Cards to one more win this year... along with all his brothers - who spent the evening together despite being separated by thousands of miles -  by texting each other as the game progressed. 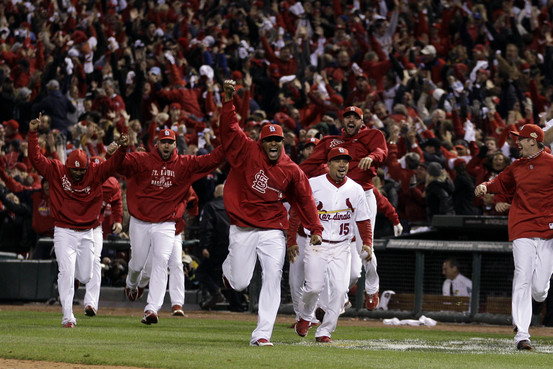