we arrive in Havana

Our early morning flight was made earlier by the fact that the flight is always overbooked and because so many Cuban Americans bring lots of stuff  "home" with them we need to be among the first to arrive to check our bags in.  Everyone has packed lots of "regalos" for the people we will meet.  I have 50+ soaps and a dozen toothbrushes and 400 pens...LOL.  Jennifer has a list of things she has acquired including spices, baseball gear and art supplies.  We will later find out that among the things they really need are powdered milk (ration books provide only about a half month's supply and only for those seven and under) and tampons (all paper products are scarce.)

The first thing we do is go to the fortress overlooking the harbor and the city for a view of Old Havana. Just as we arrive a taxi pulls up with some tourists. It is our first up close view of an ancient American car (we had seen many from the bus on the way in from the airport.) The cars are everywhere. And they are in use- some much better cared for than others but prized possessions of those who own one (many are owned by the state and used for state run taxis but privately owned ones also are used for taxis as part of a scheme for revenue generation by individuals that can only be explained over time with specific examples because the whole situation is absolutely mind boggling- more later.)

After the fortress we go to the hotel for lunch- there is a rooftop restaurant next to the roof top pool.  The whole place is very swanky. The Hotel Saratoga is right on the border between Central and Old Havana. An excellent location that gives us an opportunity to pretty much walk to anything in Old Havana which is the part of town that is being developed (and is also a UNESCO World Heritage site.) Central Havana is more run down than the older section and has less renovation (we use the term loosely) going on.

But let's get to a few photos to show some of the things we saw as we began our journey through what turned out to be pretty much an alternative universe... 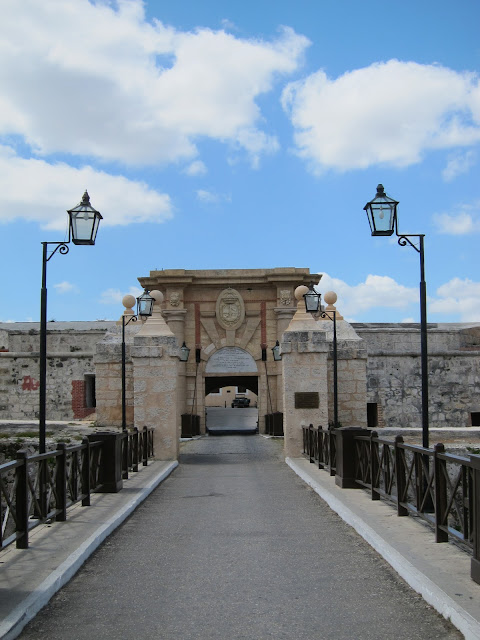 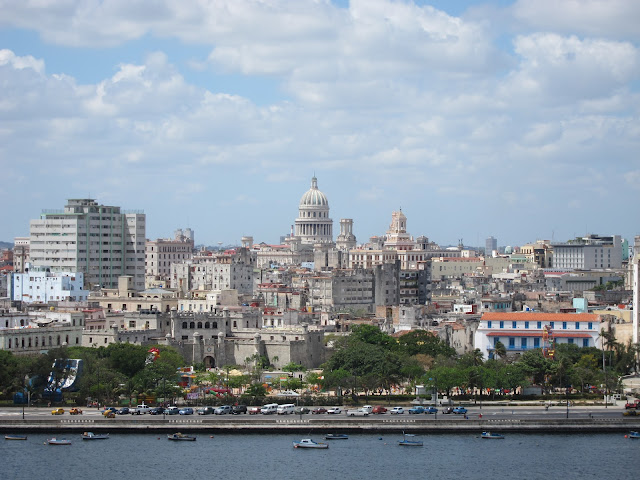 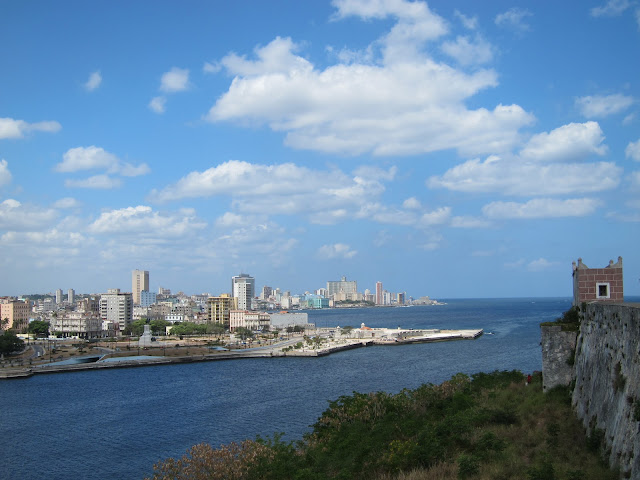 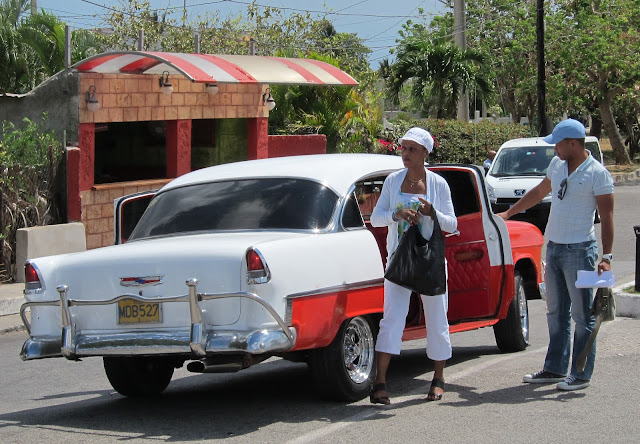 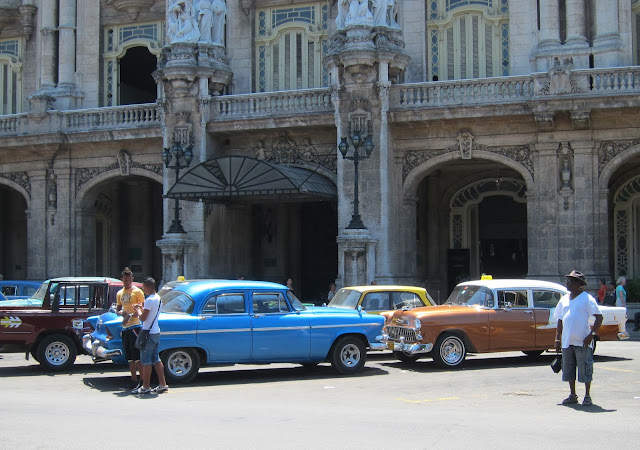 Below: the roof top of the hotel overlooking the capitol building: 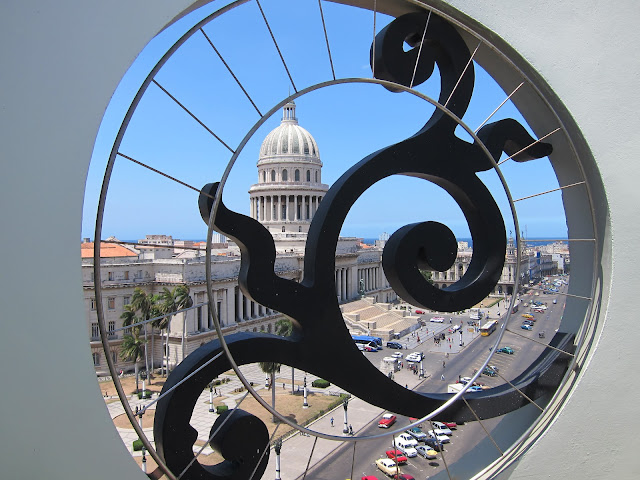 my room at the Saratoga (#205) and the bathroom followed by the hotel bar: 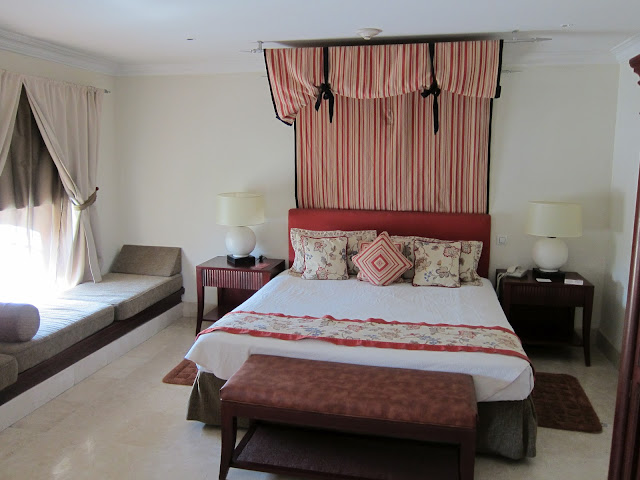 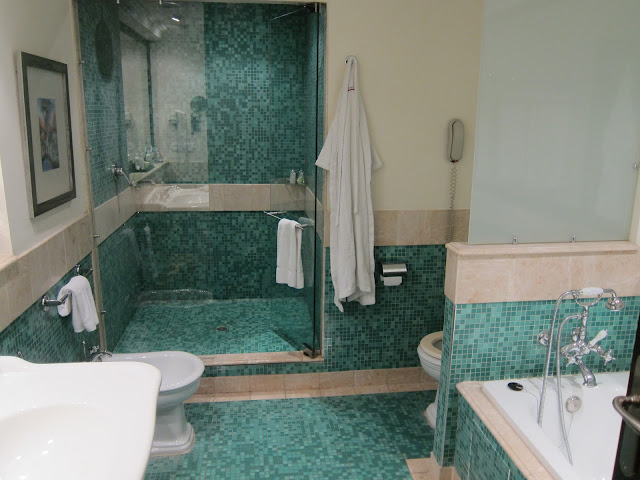 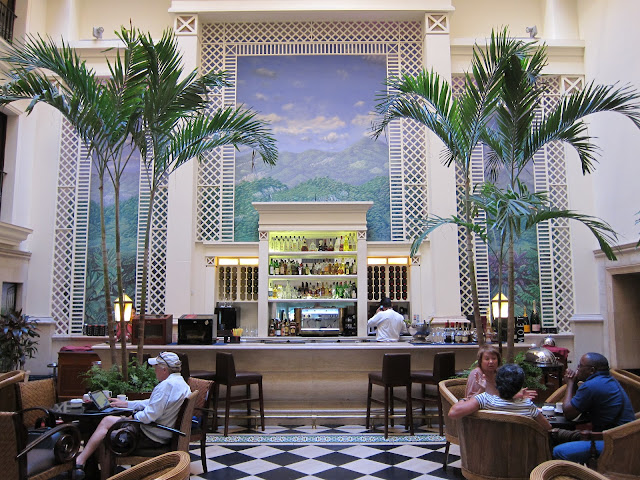 some street photos- buildings came in assorted degrees of repair from the complete shell to complete rehab: 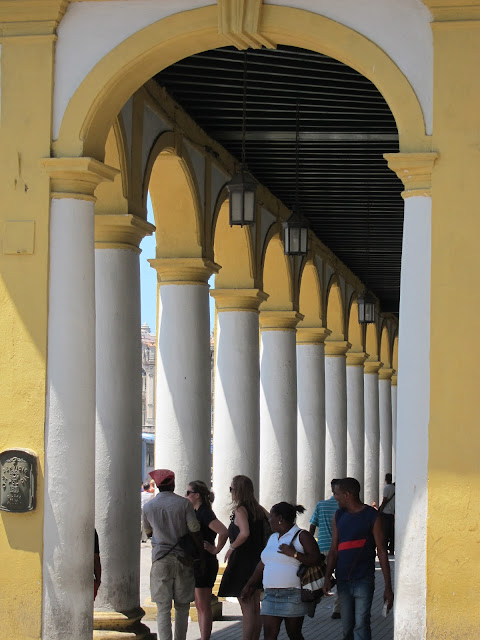 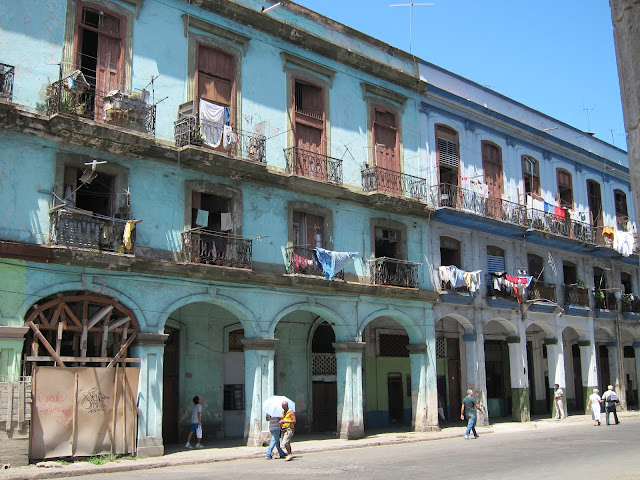 this building above is a  fairly typical level of "repair" - people liive in pretty much anything with walls and some sort of roof. 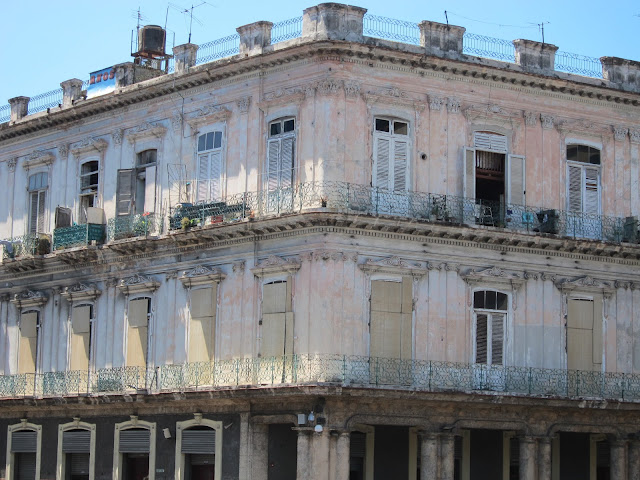 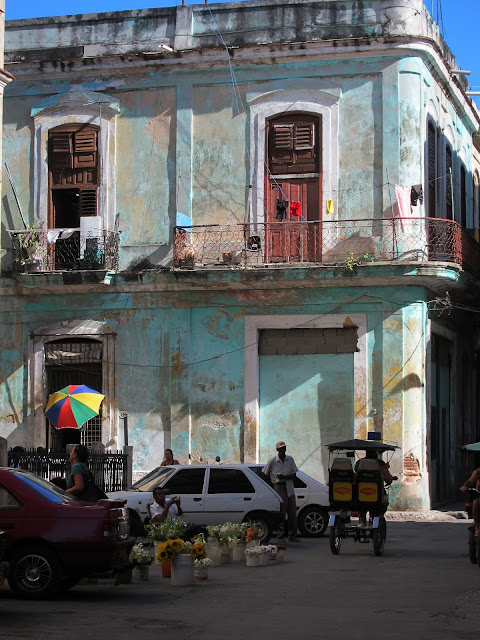 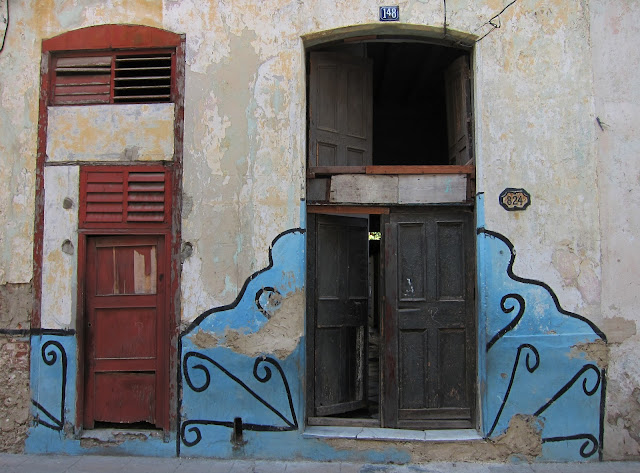 In the below photo we begin to see various modes of getting people and things moved from one place to the next.... vintage American cars are not the only way to do it, there are many bici-taxis and lots of horsecarts as well things not shown in this photo (like old Ladas and newer Kias and Hyundis.) 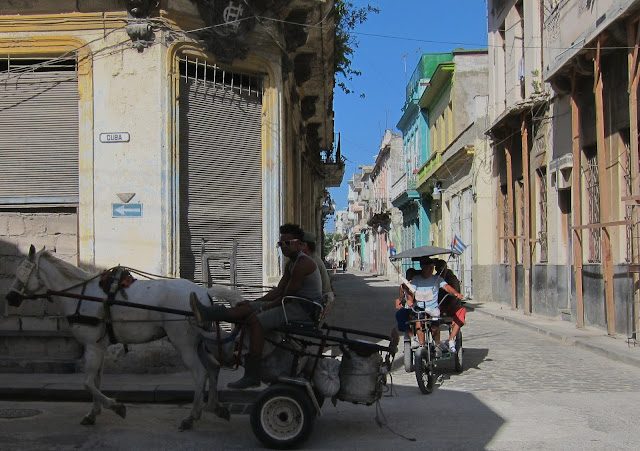 The rooms were not ready after lunch ("we pretend to work and they pretend to pay us" is not just relevant to the old Soviet system it is something we encounter on occasion here too.) So we take a walk down the Prado which separates Old Havana from Central and go to the Museum of the Revolution.  There we see various mementos from the rebels from their time in the mountains and we see Granma (the yacht Fidel used to bring 82 revolutionaries to Cuba in from Mexico where he had been in exile.) No photos in the museum so you will have to trust my report that it is in fairly bad shape with limited exhibit material.  From there, about a quarter of the folks went to the Ballet school for a recital but since my room wasn't ready and I had been up at 3:30 AM for the 4 AM trip to MIA I returned the ticket I had purchased and waited for my room as about 5 of the 20 went on.

When my room was finally ready I took a shower and relaxed before our 7PM departure for a chicken and typcial Cuban food place in Miramar (all the way across town.) I must have been travel stupid because I have no photos on my camera card of the meal or the welcome drink - so I will insert some from the earlier lunch.  Each meal has a welcome drink of Havan Club rum in some form (usually mojitos) and then two more drinks of your choice. Jennifer and I both found we had more rum in the ten days in Cuba than we had in the prior three or four decades put together... more on that later as well... 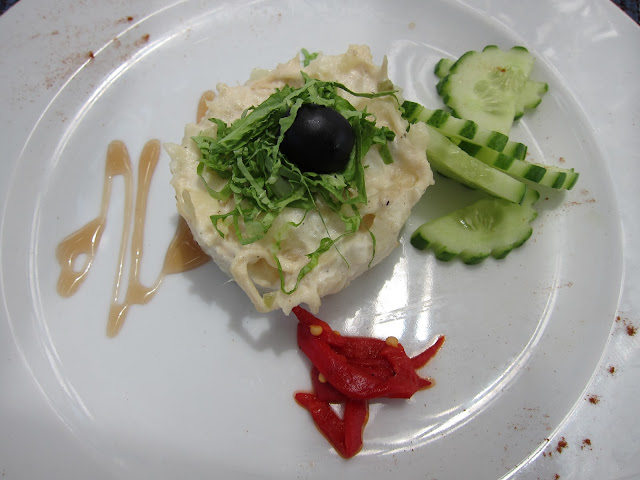 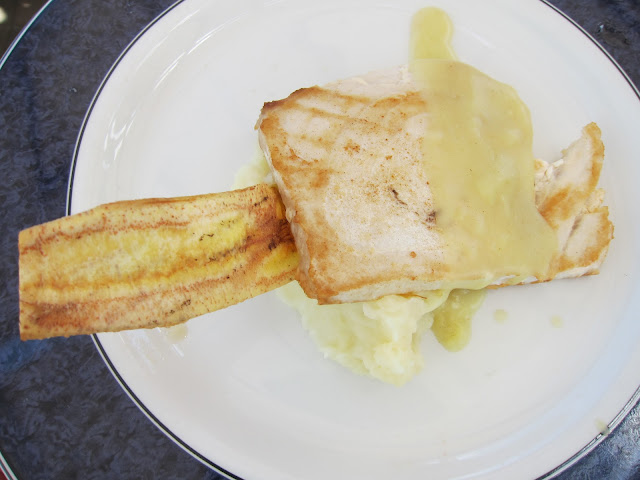 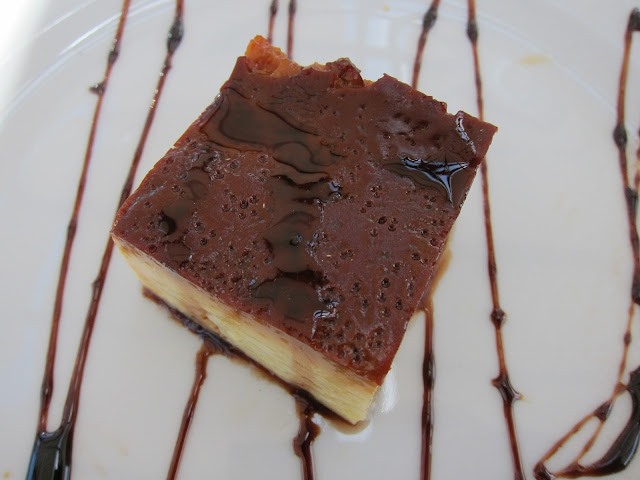 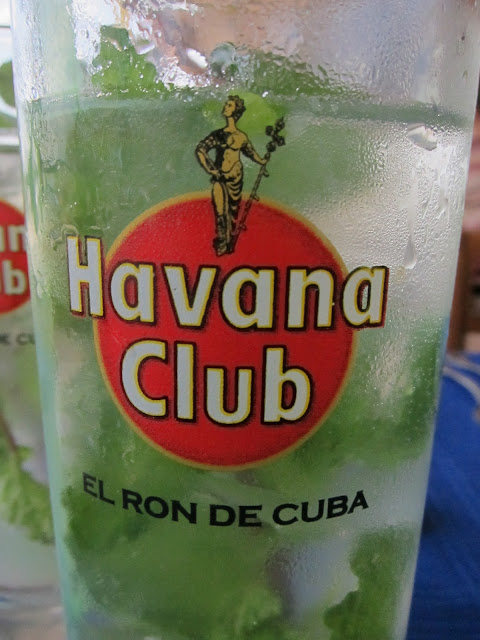 Back to the hotel and to bed ASAP - although I was on the street side, I heard nothing until the next morning.
Posted by TOR at 3:53 PM