so I woke up

I had seen (thanks to two referrals from FB friends) this incredible video called "this is water" that uses the David Foster Wallace commencement speech text set to video images which seemed to both fit the external issues and the internal... here is a link to it - you may find it interesting or enlightening -

but on the way through the morning- as I was doing all the things I had agreed to do to take care of the details of everyday life - I found the rant dissipating...LOL - to the extent I can't even remember the genesis of my ire some five hours later... especially in light of the day/date....

that Tuesday the sky was the brightest clearest autumn blue - the crisp air hinting of the winter season to come, but only the smallest of hints... and each of us of course remembers where we were and what we were doing that morning.  12 years... a long time - an instant passed - and it has been TWELVE years. How could that be? It's been forever and no time at all...

So instead of ranting today I am going to NYC -

I first went to NYC with my erstwhile boyfriend who brokered for gold arbitrage between the Chicago Board of Trade and New York COMEX.  We went several times and I spent most of my time exploring museums and learning my way around.  Later, I had a job that involved business trips to NYC back in the mid 80s.  Then a different job and a lot more trips to the city, including opening an office there.  So I knew NYC very well when I met Phil and it quickly became our destination of choice in the US for long weekend getaways.

In the year after 9/11- when no one was traveling - we went to NYC eight times.  And of course we were traveling.  Less than a month after 9/11 we were in Rome and we spent the Christmas holiday in Paris.  How could we pass up fares and hotel rates like those? Our round trip Europe tickets were costing between $400- 500 (those were the days!) - deals abounded.

But it was to NYC we returned again and again in the first year or 18 months after 9/11.  We loved it so much that our enthusiasm spilled over- and both son and daughter ended up there one way or another... Jeremy for college at NYU in 2003 and then a career there.  Angela headed there the  day after her college graduation in  2009...  And, just two years ago last month, our dear friends Laure & Arno and the adorable Alix moved there - so now we have all kinds of reasons and excuses to visit!

So in one week from today we will be off again to NYC - because even though NYC doesn't look like this photo I took in 1997 on one of the first trips Phil and I took to NYC together- it is still our favorite US destination.... 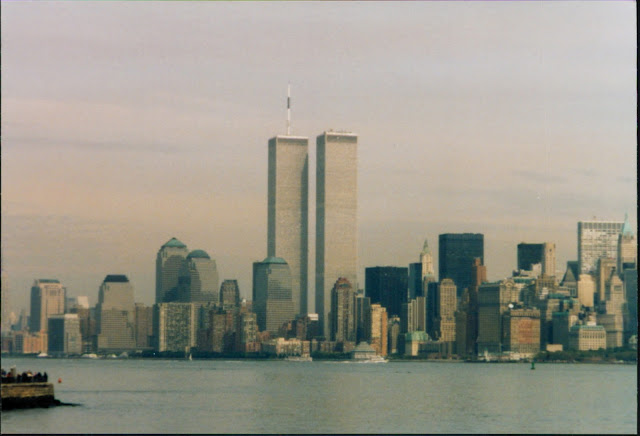 in case you want to see a little bit more 9/11 related information - here is a post I did when we visited the Memorial in 2011....

today I say a prayer of thanks for all firemen/women everywhere - god bless them for the work they do. I still tear up thinking of them in full gear running up the twin tower stairwells as survivors were running down...
Posted by TOR at 3:06 PM