everyone says they are exhausted

after reading our holiday newsletter... LOL and it is getting really close to the end of the year so maybe a quick recap is in order- so here is ours for 2013-


Hope this holiday letter finds all of you well!  When we last wrote, we were headed off to New Zealand and Australia with buddy Tom. We saw both the north and south islands of this beautiful country and were wowed by the variety of experiences.  We especially enjoyed the Maori area of Rotorua. We spent Christmas in Sydney and felt like we didn’t get enough time to really experience the city fully (read that as a return trip being very likely- LOL)  We were only home four days when we headed out again (this was a recurring theme for 2013.)
2013 started off with twelve weeks at a new Florida winter rental called Pelican Point.  We had lots of visits from friends and family from various places across the country and in March had a get-away to Portland Oregon from Florida for the Bat Mitzvah of our niece Marissa.  Also in mid-March, we purchased a two bedroom condo for future use in our winter retreats from Chicago weather.  The seasonal rental rates being so high and the real estate prices being so low made this move eminently sensible.


In April we returned to a chillier-than-usual Chicago and a full calendar of social plans, with theater and concerts and the Chicago Gourmets group.  In the third week of April we headed to Paris via New York City (so we could see the kids and our friends).  Paris was a belated celebration of my birthday and the highlight was the Promenade Plantee,  the prototype for the Highline in NYC which we had visited just days before!
In early May we hosted a dinner at our house which was prepared by Le Cordon Bleu Chicago’s competition cooking team. We had bid for the dinner at an auction in the fall of 2012, but coordinating dates for the event was a challenge given our schedule – so May 2013 it was!  Then we were off on one of two big trips we had planned for 2013: Peru and Ecuador.  We explored Cuzco and Machu Picchu before touring Ecuador (the Amazon basin, the Otovalo highlands and the Galapagos Islands.) We both found the highlights of that trip to be the parakeets in the Amazon (see card photo if you got the Ecuador card) and seeing both the Southern Cross and the Big Dipper together in the night sky.  We came back on the last day of May, and in the first full June weekend we headed to St. Louis for a visit with family – Phil’s mom Sue has a new residence, and brother Larry flew in from Miami to join us during the visit.  It was a great opportunity to catch-up with brother Sandy and his kids Lauren & Jeffrey (who by the way are actually not really kids anymore- Lauren’s in college and Jeff is nearly there as well.)


In late June, right after we celebrated our 12th anniversary, Jeremy and Phil went to a folk festival in upstate NY and I headed to Florida with a rental SUV full of things for the new condo.
July found us at home (gasp!) and hosting a group of friends when Laure, Arno & Alix visited for the 4th of July. In August, my travel buddy Tom and I spent ten days on the road in upstate NY, mostly in the Adirondacks and along the St Lawrence Seaway.  When I returned home we had a great visit from Steve & Suzanne and Jack & Marissa.  It was quick but we did manage to get them to goosefoot for an early birthday celebration for Steve.  Then, before we knew it, it was Labor Day weekend.  Shortly after that, we headed to New York City for our second visit of the year, to see the kids and Laure & Arno (and the world’s cutest toddler, Alix!) Right after we got home from NYC, we had a visit from friends Matt & Ann just days before leaving for our “big trip” to China.
We spent time in Hong Kong and then Guangzhou, Lijiang, Shangri La, Guilin, Shanghai and Hangzhou.  Our brother Larry joined us in Guilin (and for the remainder of the destinations)- it was such an incredible trip I am STILL going through the 1500 photos and trying to get some blog posts created about the things we saw and did.   China is a huge country with lots of variety to experience and after a total of almost eight weeks over the years, we have just begun.  When we got home we had a busy two week social calendar of dinners, theater and concerts.  We also had a lovely visit from Danish friends Poul & Lene for four days of catching up with each other.  Friends Richard & Irene hosted one evening, and Jens & Ann another, so we had lots of Danish memories to relive over the course of the Chicago visit.
Then at the beginning of November, I headed down to the new Florida place two weeks before Phil, to get it ready for occupancy this winter.  Phil arrived the week before Thanksgiving.  The Saturday of Thanksgiving week we were off to Louisiana to take a week-long course at the UL Lafayette on Cajun history, culture, cooking and music.  We stopped in New Orleans for a few days beforehand.  We returned home on the 7th - had time to take a breath and then our friend Lynn arrived the 9th from Chicago for a week of hanging out in perfect weather.  While we try not to gloat, all our northern visitors look like refugees when they arrive during the winter months, and Lynn was no exception.  We are so lucky to have this winter retreat (and our cats Lucy & Penny LOVE getting away for the warmer weather – and geckos – as well!)
Now a week at home will bring us to the Christmas holiday week – we will spend the time divided between Miami (where Larry resides) and our place, hosting Steve & Suzanne for a respite from cold in the Pacific Northwest.  Over the winter we expect visits from Matt & Ann, Jennifer & Dave, my cousin Michele and possibly a few others.  Georgia and I are headed to Morocco in February for a “girl trip” since we couldn’t find a class for this winter that really attracted us.  We have plans for “Forks & Corks” weekend with both Georgia and Chuck (CBGB) and plan to do the Wine Walk again in March at Ringling.
Our big news this year is that we continued to move Phil toward “semifreelife” by turning over property management of half his units to a new manager.  We hope to have the process complete by the end of 2014.
I have blogged almost endlessly about all the things we do. So if you have any desire at all for details that I can’t fit in the holiday letter, you can visit the blog: http://semifreelife.blogspot.com  In October (the third anniversary of beginning the blog) I went over 25,000 post views – so someone is reading it… LOL
I also have lots of new photos posted on my website at: www.victoriasterlingspics.shutterfly.com  and coming soon the China ones too! I promise!
Now it is late December, and I write each year at this time hoping your year has gone well and that this finds you and your families happy and healthy.  As the year closes, we count our blessings and send to each of you our very best wishes for health, wealth, happiness, peace, prosperity, good luck and abundance in 2014!
And yes I realize we are busy - that's why I am still working on China photos and posts... but this past week we got a newsletter from our friends Mac & Niti that clearly shows we are not the only ones with issues of overscheduling- LOL
here is their newsletter- notice the number of months that they are away from their home (we are not gone nearly as much! LOL) 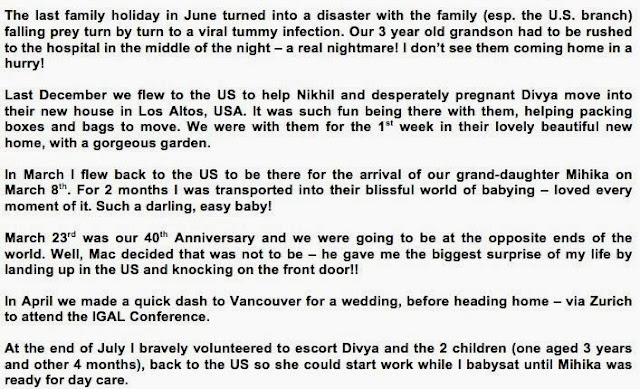 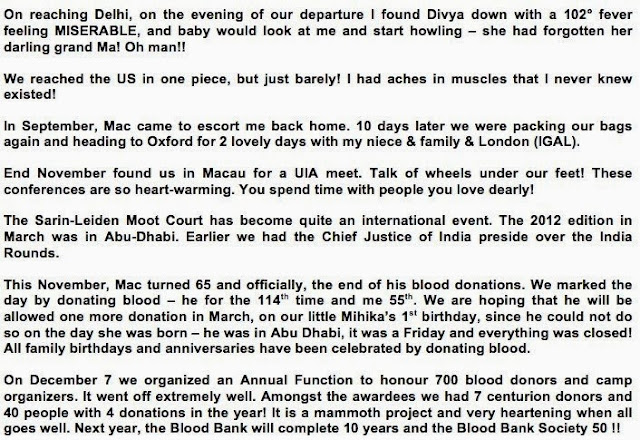 Niti and her family founded a blood bank in the city where they live and she and her mother have been working for years to make it the success it has become. And Mac and one of his sons founded the moot court competition that is now also knowing a great deal of success.  Mac and Phil met in law school many decades ago and we were lucky enough to have visited with them at their home during a trip we took to India (my first trip was inspired by meeting Mac and the second was the one where we spent time with Mac & Niti.)
This time of year always causes me to reflect on the passing of time and what has happened since the last marker of New Year - and I am not sure why we CELEBRATE the holiday the way we do... because raucous behavior seems like the antithesis of pausing and reflecting on the prior year and setting a path for the next one... but hey, we live in America! (LOL)
my reflection upon getting the note from Mac & Niti was to recognize how wonderful my life is that we (Phil & I and our friends) have the opportunity to travel and explore the world and keep connections, that we make along the way, stronger by "touching base" with folks where and when we can.
still more to come - and I recognize that each day is precious so I keep repeating my travel mantra GO NOW, GO NOW, GO NOW...
meanwhile - I know - I have to keep working on China....LOL so back with more later today!
Posted by TOR at 11:21 AM