"I am drinking the stars!"

My very first large wine purchase (and one of the most brilliant moves I have ever made in wine buying LOL) was to buy the 1988 vintage of Cuvee Winston Churchill and the Laurent Perrier Grand Siecle in magnums... just to give you and idea of how brilliant it was I paid $100 each for the eight bottles... I remember swallowing hard when I coughed up the $800 bucks and began "colllecting" wine.  Some of my friends will remember these fabulous wines, which we enjoyed at holiday parties and larger get togethers at my house on LaCrosse (way back in the day... now three residences ago)

I mention that purchase because, at that time I was just starting to collect and attend wine auctions.  I can also tell you that my first auction lot purchased was a case of 1983 Chateau Talbot at a Davis & Company auction.  It was a rather unheralded vintage but individually fabulous bordeaux that our wino friends enjoyed for many subsequent years.  But back to my story...about champagne...

I loved champagne and wasn't too keen on white wine at the time-which may have to be another post because now consistently my favorite white wine is Corton-Charlemagne which is from Aloxe-Corton in Burgundy and is wine made from chardonnay grapes.  I loved champagne and so it was a natural that when I started collecting it would be champagne.

The phrase, ”Come quickly, I am drinking the stars” has been attributed to Dom Pérignon as he drank champagne for the first time.  However- this excerpt from Wikipedia will perhaps enlighten us a bit more factually-

Wines from the Champagne region were known before medieval times. The Romans were the first to plant vineyards in this area of north-east France, with the region being cultivated by at least the 5th century, possibly earlier. Later, churches owned vineyards and monks produced wine for use in the sacrament of Eucharist. French kings were traditionally anointed in Reims, and Champagne was served as part of coronation festivities. The Champenois were envious of the reputation of the wines made by their Burgundian neighbours to the south and sought to produce wines of equal acclaim. However, the northerly climate of the region gave the Champenois a unique set of challenges in making red wine. At the far extremes of sustainable viticulture, the grapes would struggle to ripen fully and often would have bracing levels of acidity and low sugar levels. The wines would be lighter bodied and thinner than the Burgundy wines they were seeking to outdo.

Contrary to legend and popular belief, Dom Pérignon did not invent sparkling wine, but he did make important contributions to the production and quality of Champagne wine. The oldest recorded sparkling wine is Blanquette de Limoux, which was apparently invented by Benedictine Monks in the Abbey of Saint-Hilaire, near Carcassonne in 1531. They achieved this by bottling the wine before the initial fermentation had ended. Over a century later, the English scientist and physician Christopher Merret documented the addition of sugar to a finished wine to create a second fermentation, six years before Dom Pérignon set foot in the Abbey of Hautvillers and almost 40 years before it was claimed that the famed Benedictine monk invented Champagne. Merret presented a paper at the Royal Society, in which he detailed what is now called méthode champenoise, in 1662. Merret's discoveries coincided also with English glass-makers' technical developments that allowed bottles to be produced that could withstand the required internal pressures during secondary fermentation. French glass-makers at this time could not produce bottles of the required quality or strength. As early as 1663 the poet Samuel Butler referred to "brisk champagne".

In France the first sparkling Champagne was created accidentally; the pressure in the bottle led it to be called "the devil's wine" (le vin du diable), as bottles exploded or corks popped. In 1844 Adolphe Jaquesson invented the muselet to prevent the corks from blowing out. Initial versions were difficult to apply and inconvenient to remove. ... Champagne did not use the méthode champenoise until the 19th century, about 200 years after Christopher Merret documented the process. The 19th century saw an explosive growth in Champagne production, going from a regional production of 300,000 bottles a year in 1800 to 20 million bottles in 1850. In the 19th century Champagne was noticeably sweeter than the Champagnes of today. The trend towards drier Champagne began when Perrier-Jouët decided not to sweeten his 1846 vintage prior to exporting it to London. The designation Brut Champagne was created for the British in 1876.

My favorite champagnes are those made solely of the chardonnay grape. These are called blanc de blanc or blanc de chardonnay (producers vary) and as a group I am extremely fond of the "grower" champagnes which have over the years been great values compared to the brands of the large champagne houses.  Champagne is a commodity. Except for vintage champagnes each "house" has its own style and blends grapes from many vineyards and even years to make its "house style".   My husband loves Krug; it is not to my taste.  I love the blanc de blancs and he loves the blanc de noirs (made with the pinot noir grape.)  But I may be getting into the weeds here...LOL it happens to wine geeks and having been tutored by among the best of them (thanks to Neil and Phil!, and a shout out to friend Michael Davis who was the auctioneer at my first auction purchase) I fall into pontificating... so I will let it rest a bit and go back to the reason for this post....

last night Michael's on East (hereinafter MOE- LOL the old lawyer habits die hard...) held its annual champagne tasting and Phil was insistent on going.  I demurred on the grounds that we have plenty of inventory and that I really only enjoy the HDH (Michael Davis being the D) champagne tastings. Years ago we used to go to the Sam's champagne tastings until I put my foot down- too many twenty-somethings in little black dresses looking for their next commodities trader boyfriends/sugar daddies. I love the HDH tastings because 1. Michael (Davis) always has the best producers and lots of high end vintage and prestige cuvees to taste 2. they are very limited in number of attendees and 3. the vast majority of those attending the event understand the etiquette of tastings (take a pour and STEP AWAY from the table, don't monopolize the servers- or as we said in the ancient days "don't Bogart that joint") I attempted to get Phil to go on his own but NO... he wanted a wine buddy along and with Sheila in Chicago and Arno at Racine's NY, his two wine-geekiest tasting buds were unavailable - hence my presence...

So off we went- 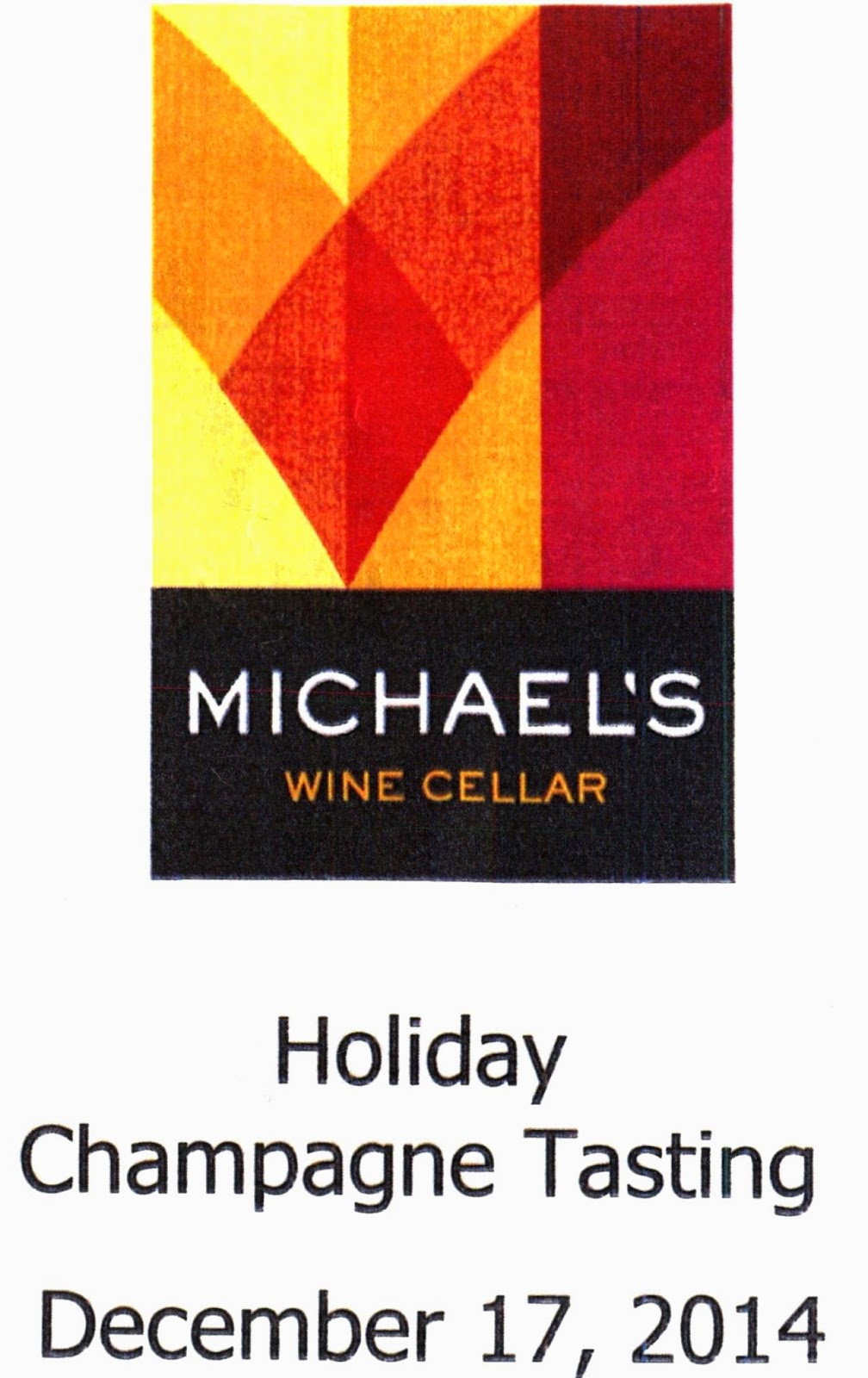 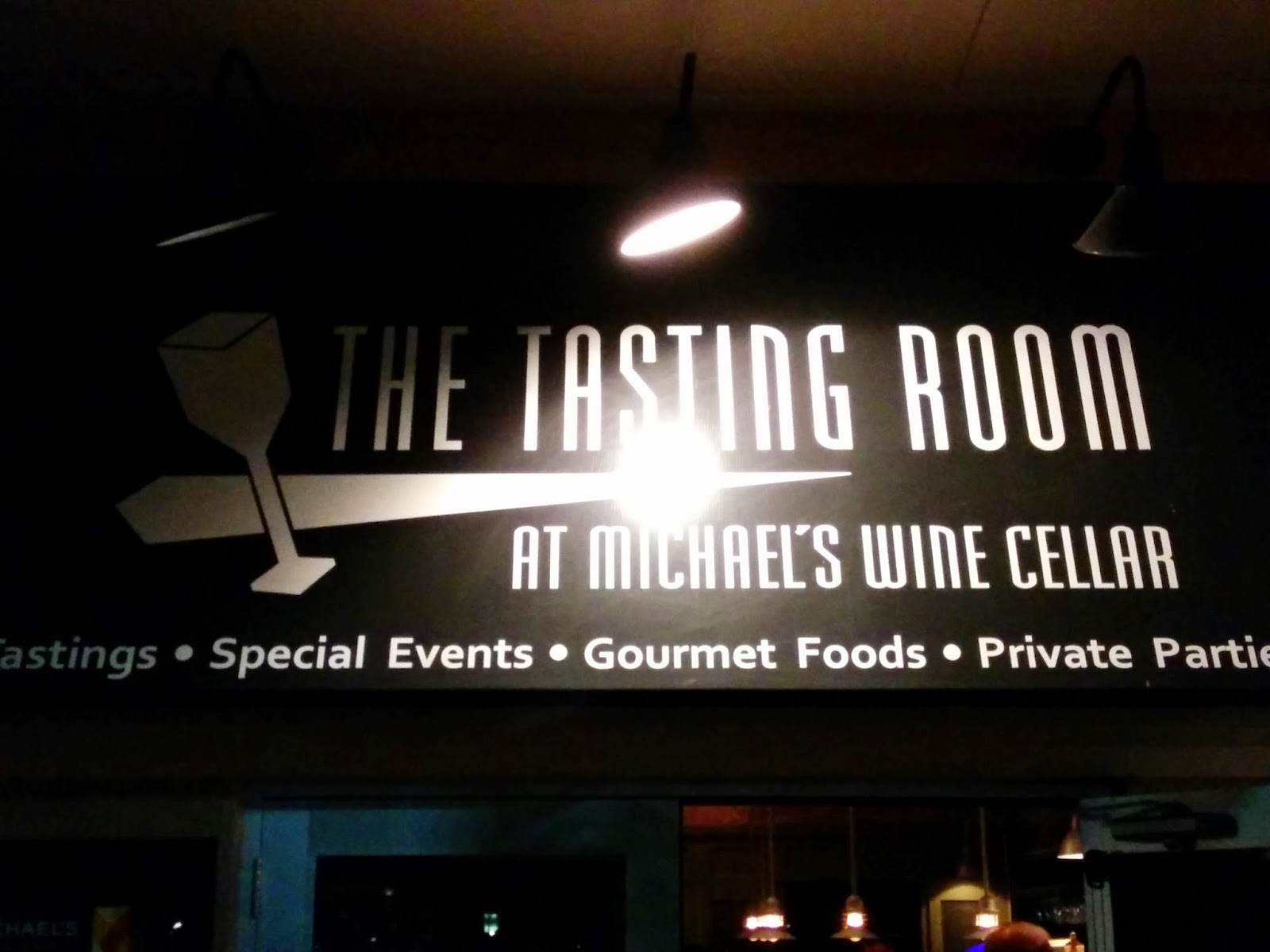 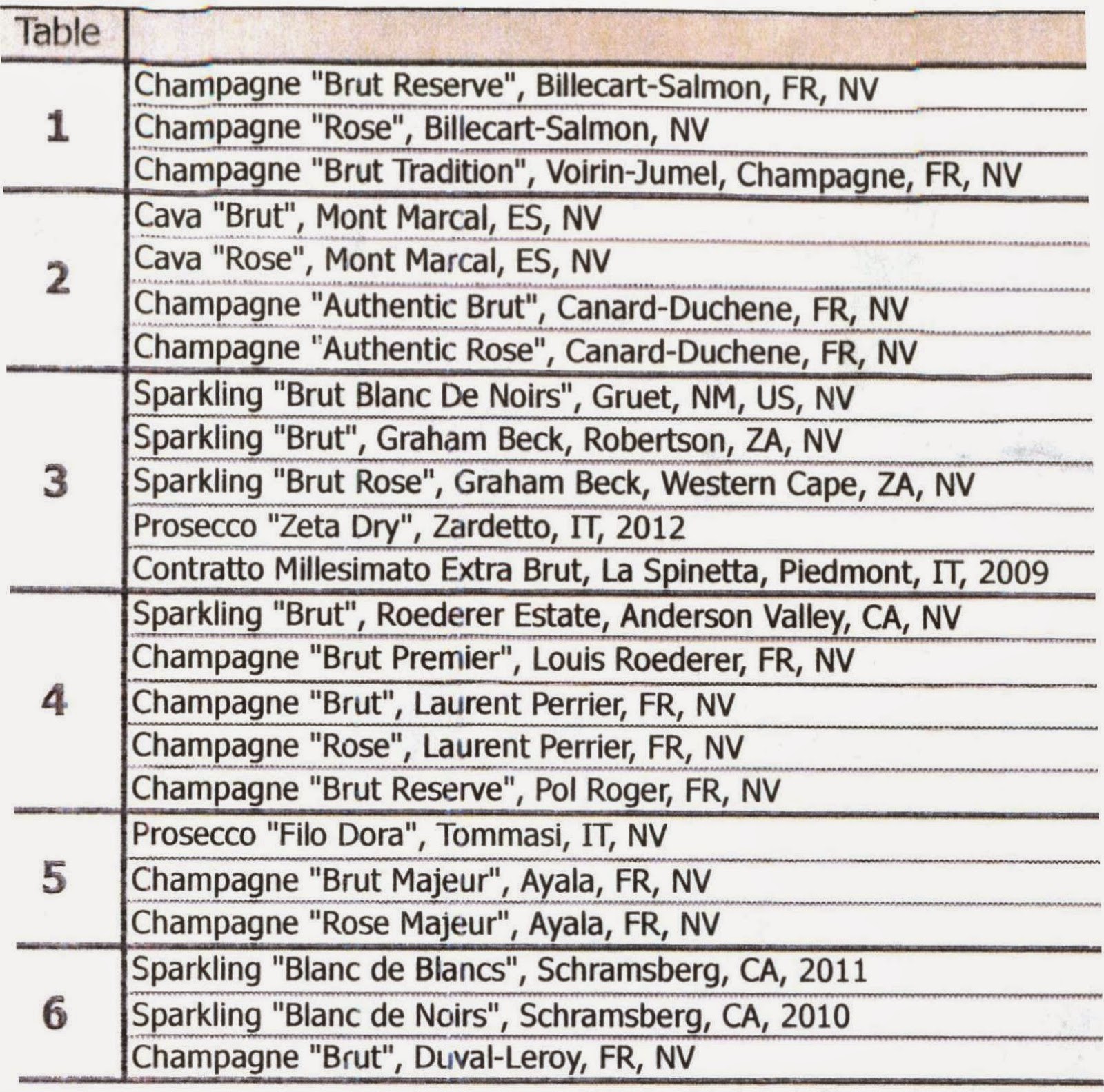 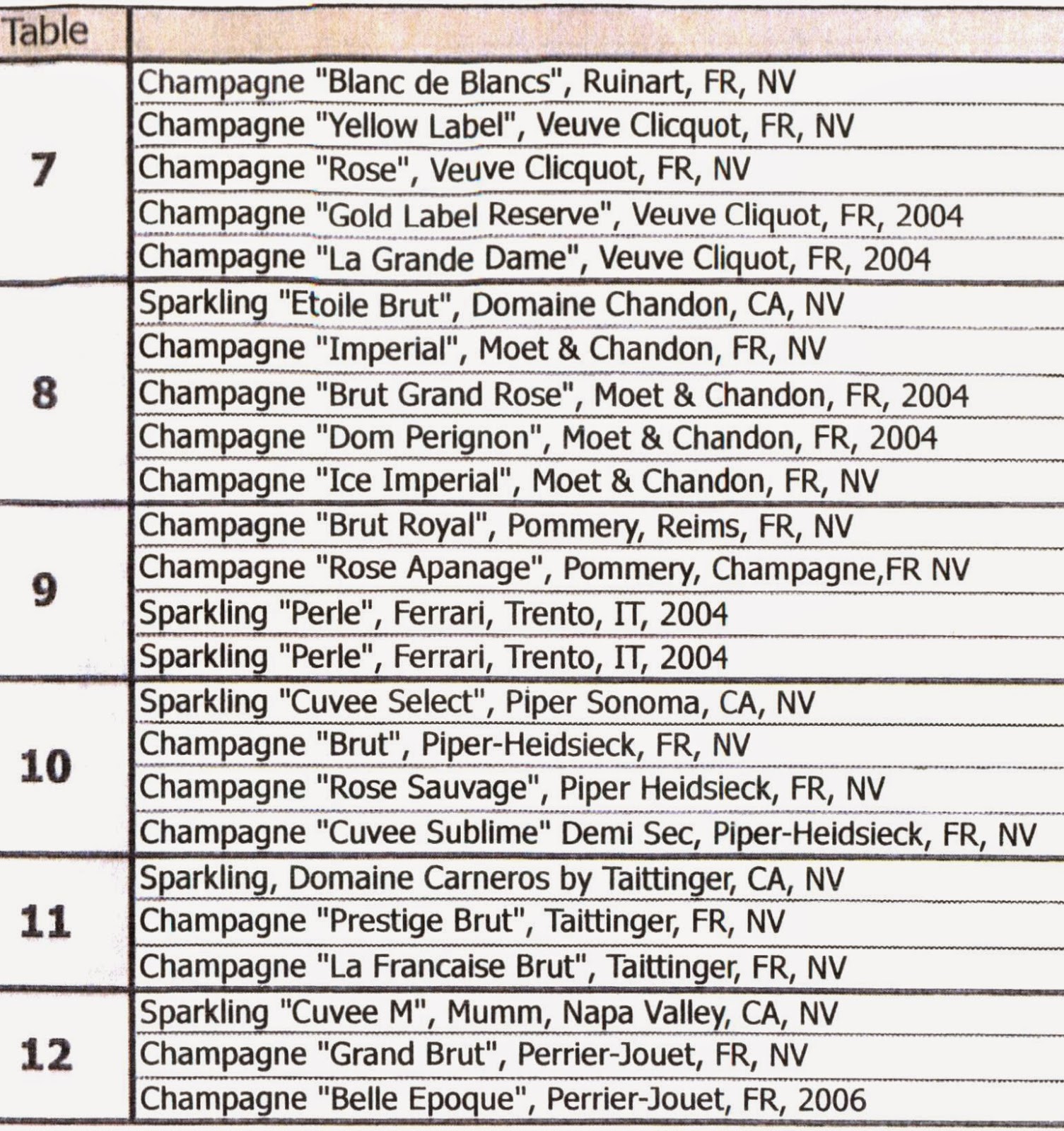 as you can see from the list - there were limited numbers in the prestige cuvees - the Dom, the Grand Dame and the Perrier Jouet "fleur" Belle Epoque.  The best showing of the evening, in both our opinions, was the Gold Label Reserve from Veuve.  I am so not a Grand Dame fan that I almost skipped the table- Phil convinced me I had to taste it and he was right... it showed very well. 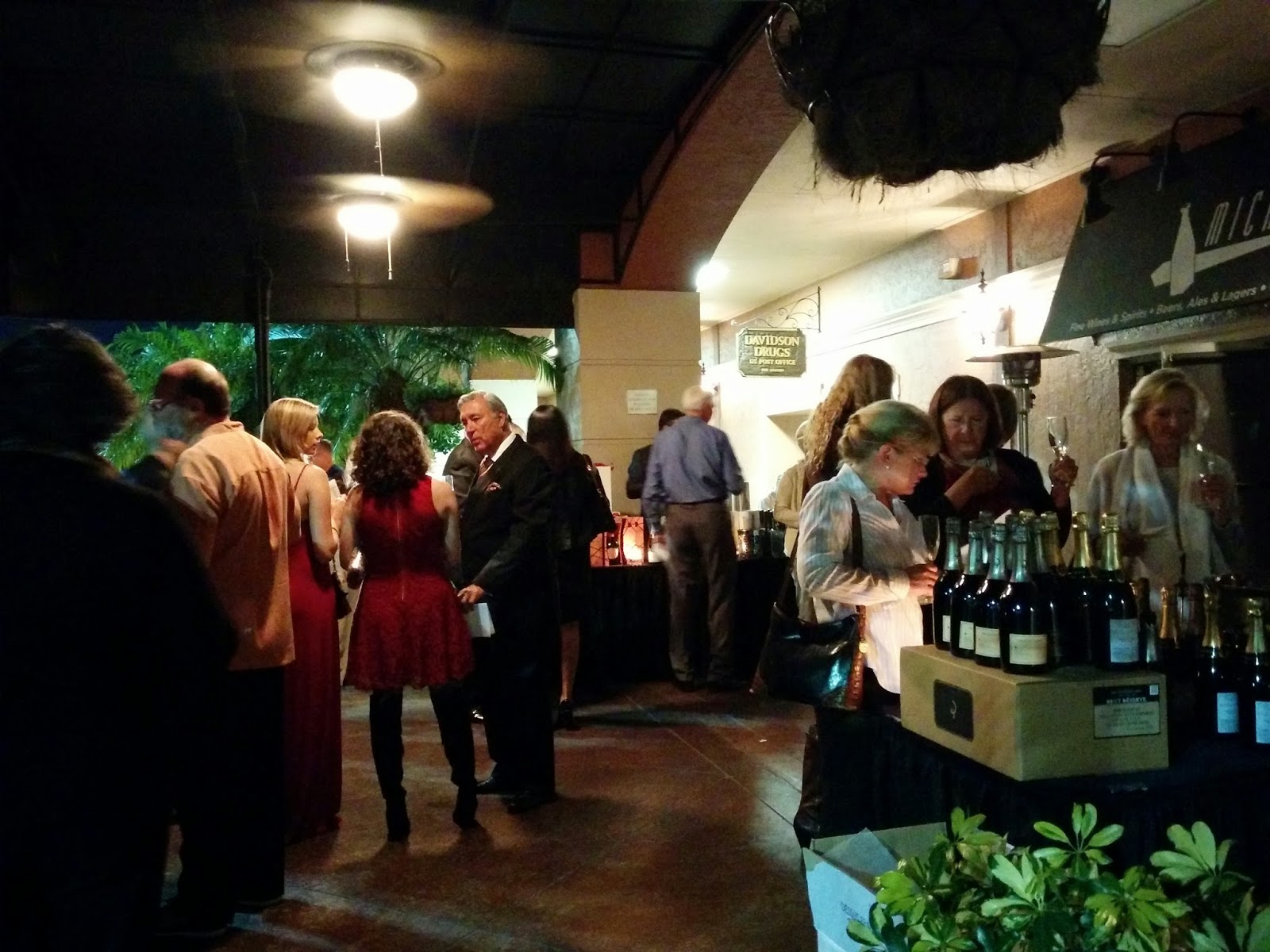 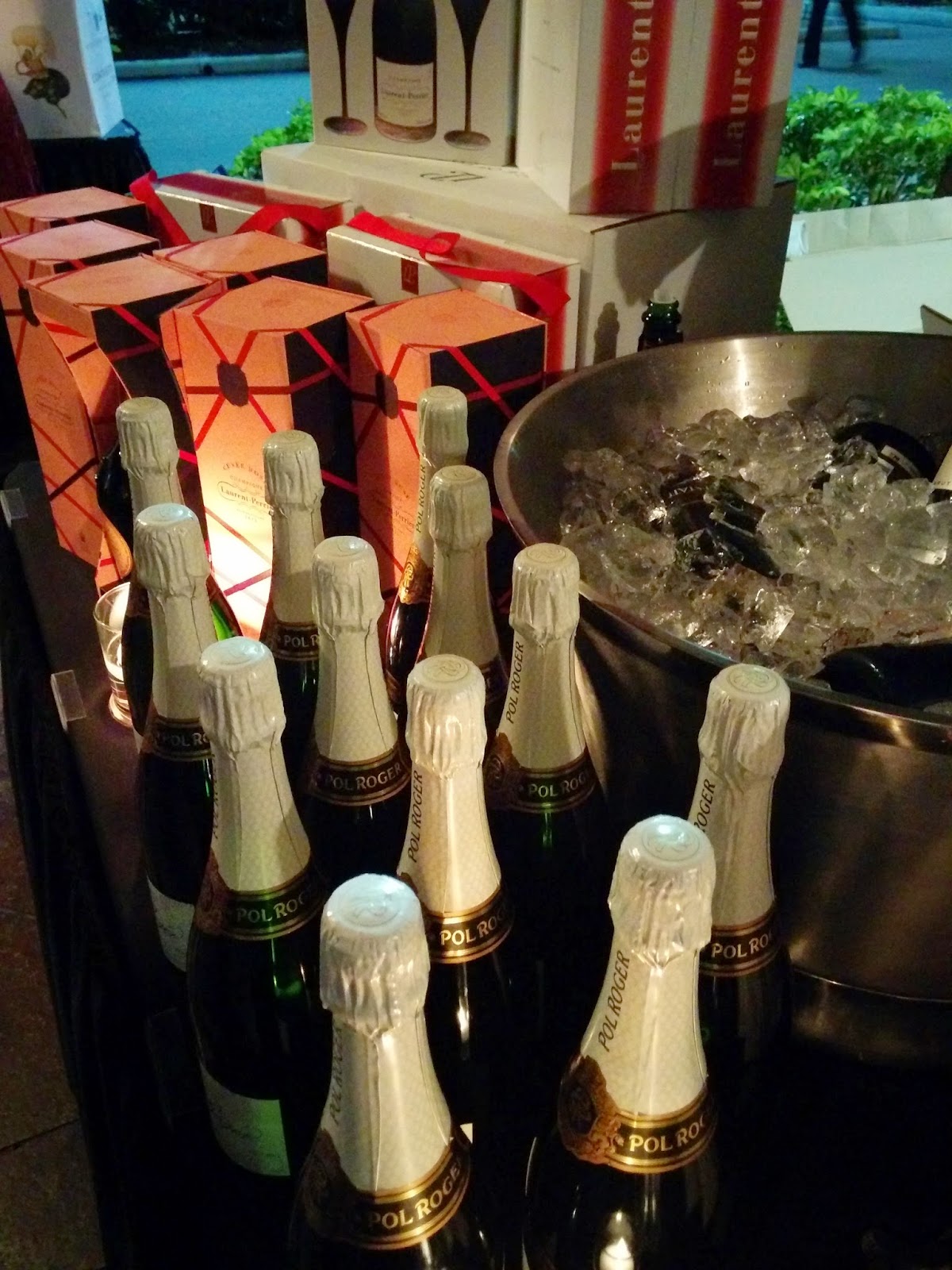 inside, cheese and pate and oysters rockefeller - and while I love raw oysters with champagne I am not a fan of cooked oysters except in an oyster po' boy (preferably somewhere out in the bayou on the way to Lafayette LA) - see the cajun country posts from last December.... and although you can't see it in the photo- Michael's attention to detail is evident here - the small forks are real not plastic and the plates are china not paper or plastic... he really pays attention! 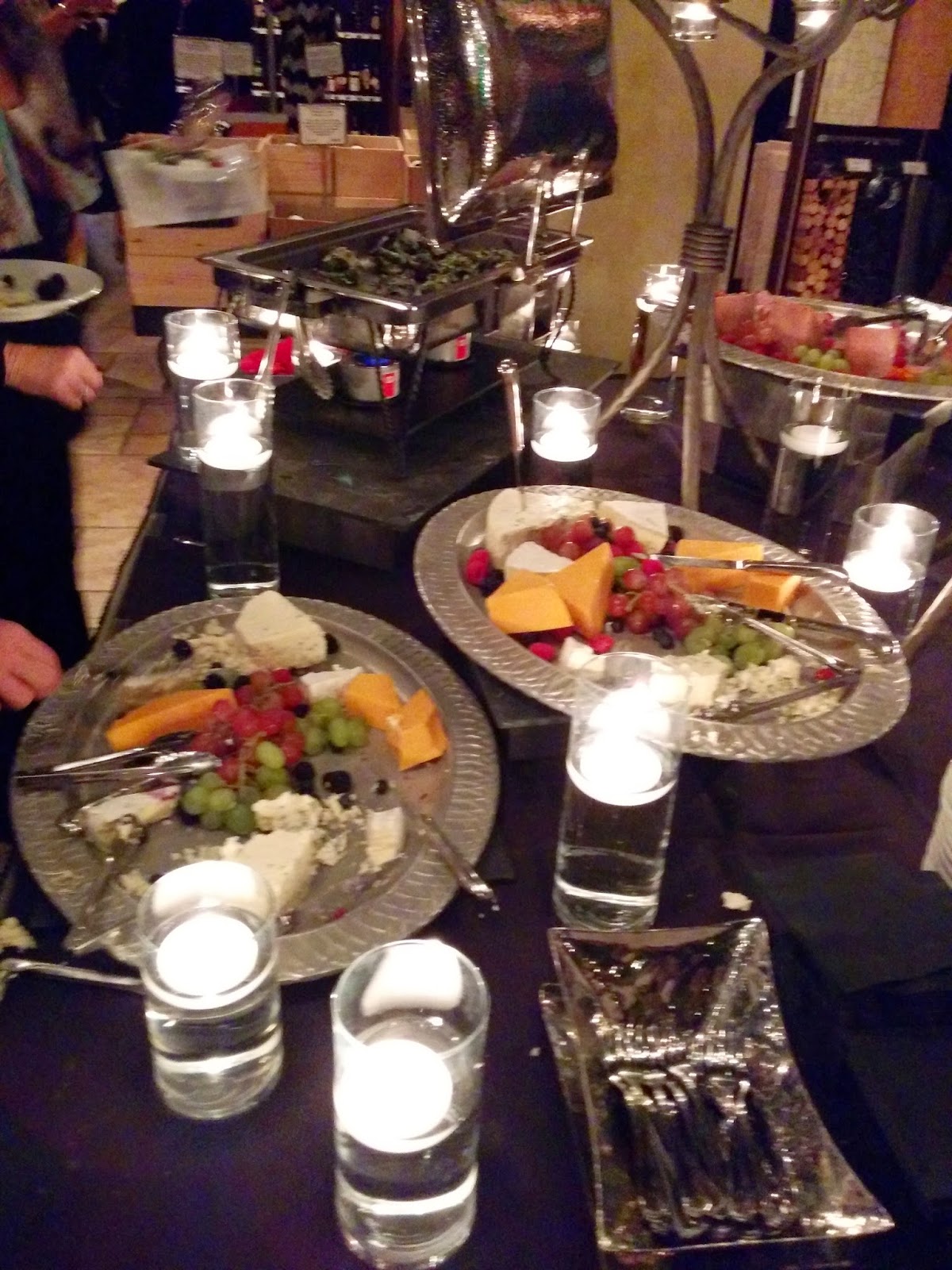 Michael's Wine Cellar is so suited for these kinds of events- I think he has such incredible business acumen that no one around here can touch him for attention to details that make the experience of his events pure enjoyment... well except for one thing- LOL- he can't control the boorish manners of the customers and last night there were several rude attendees who simply would not move away from the tables. At one point when Phil asked one group to step aside, they said they would when they were good and well done (at the DP table of course.) Another guy on the outskirts of the scene turned to us and said "they have been standing there a half an hour..." while it was likely not exactly true they certainly wanted to be sure they, and only they, were being served.  At that point I left... it was just this sort of thing that turned me against "mass market"  tastings years ago. 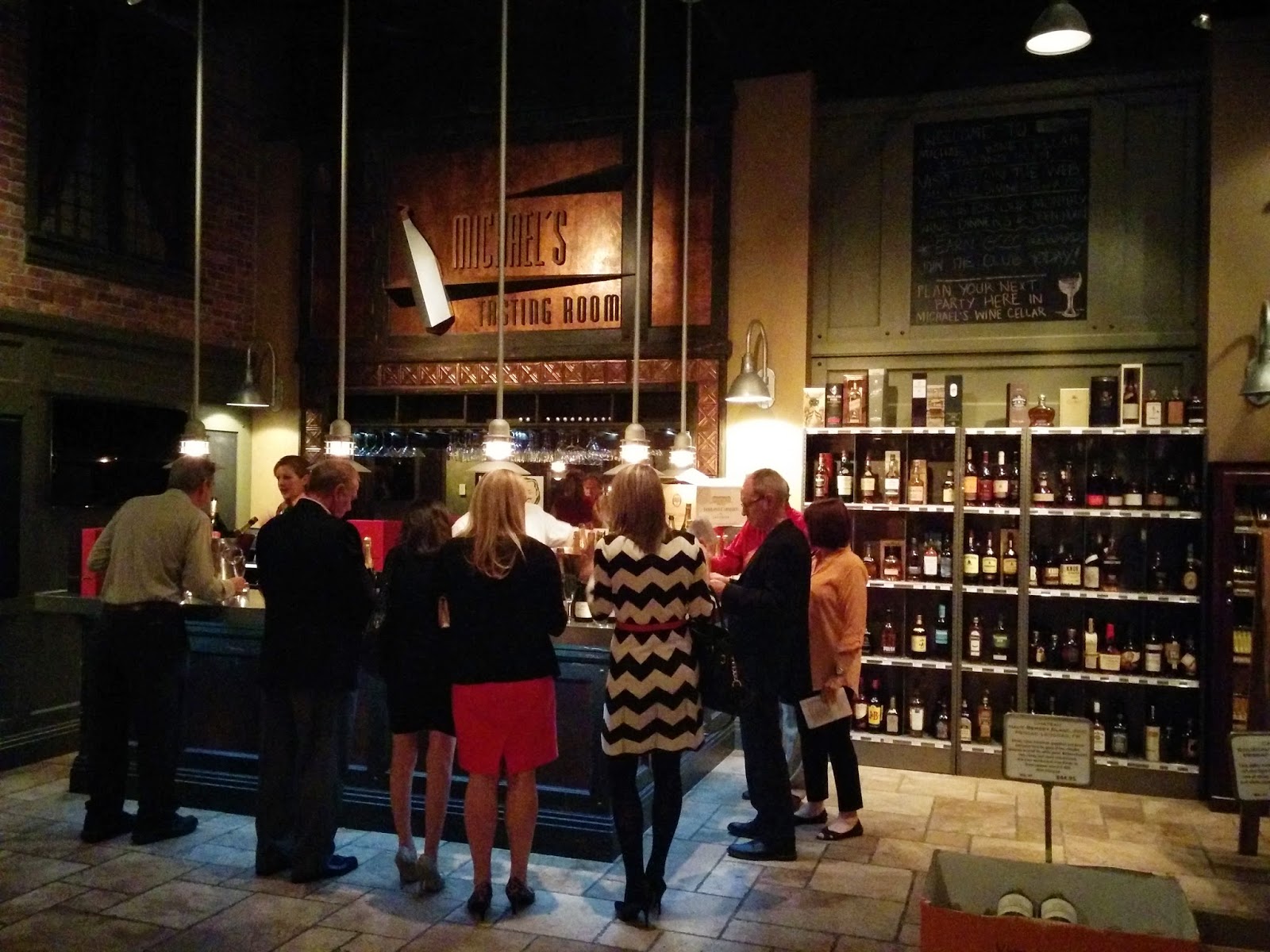 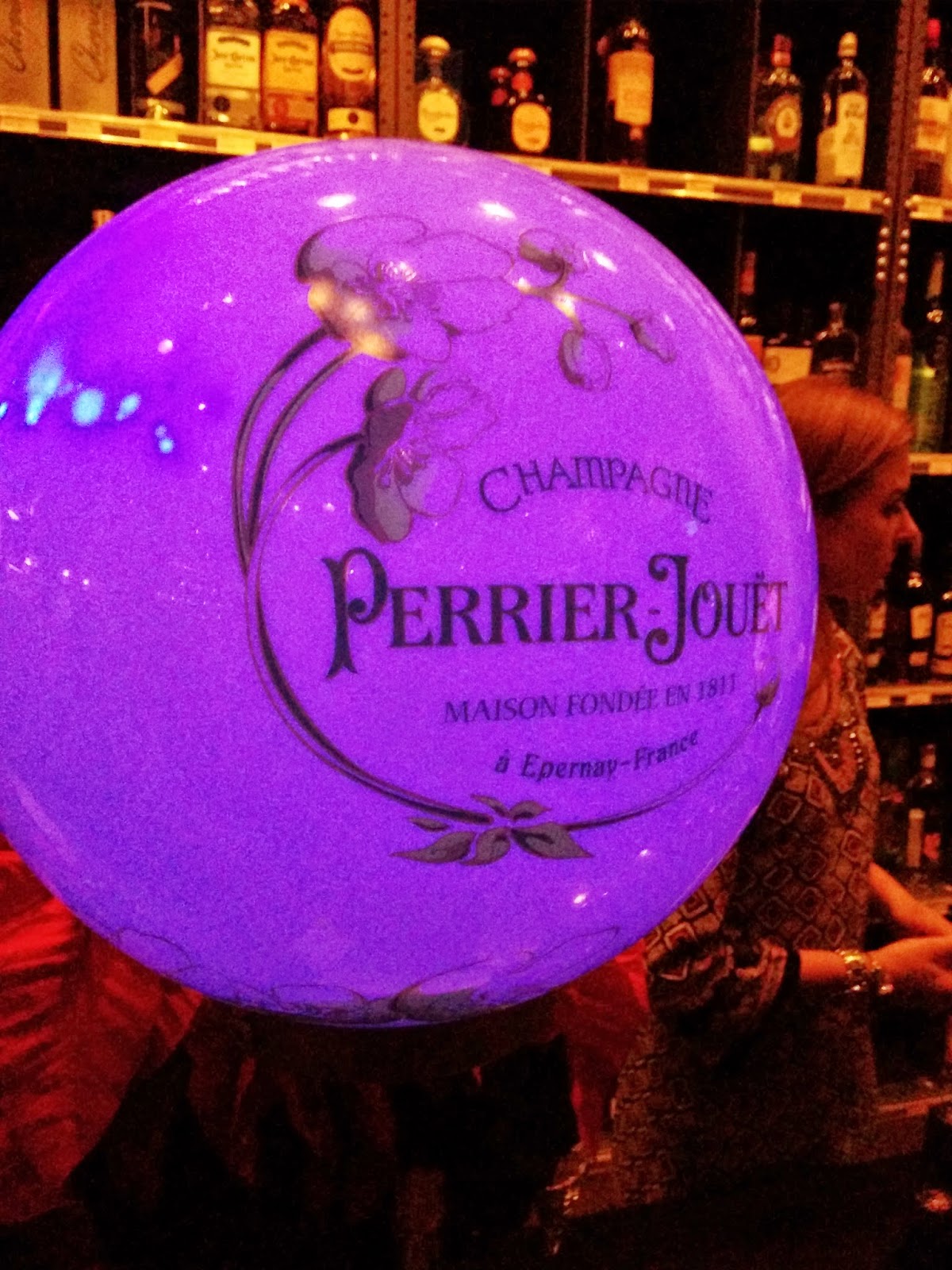 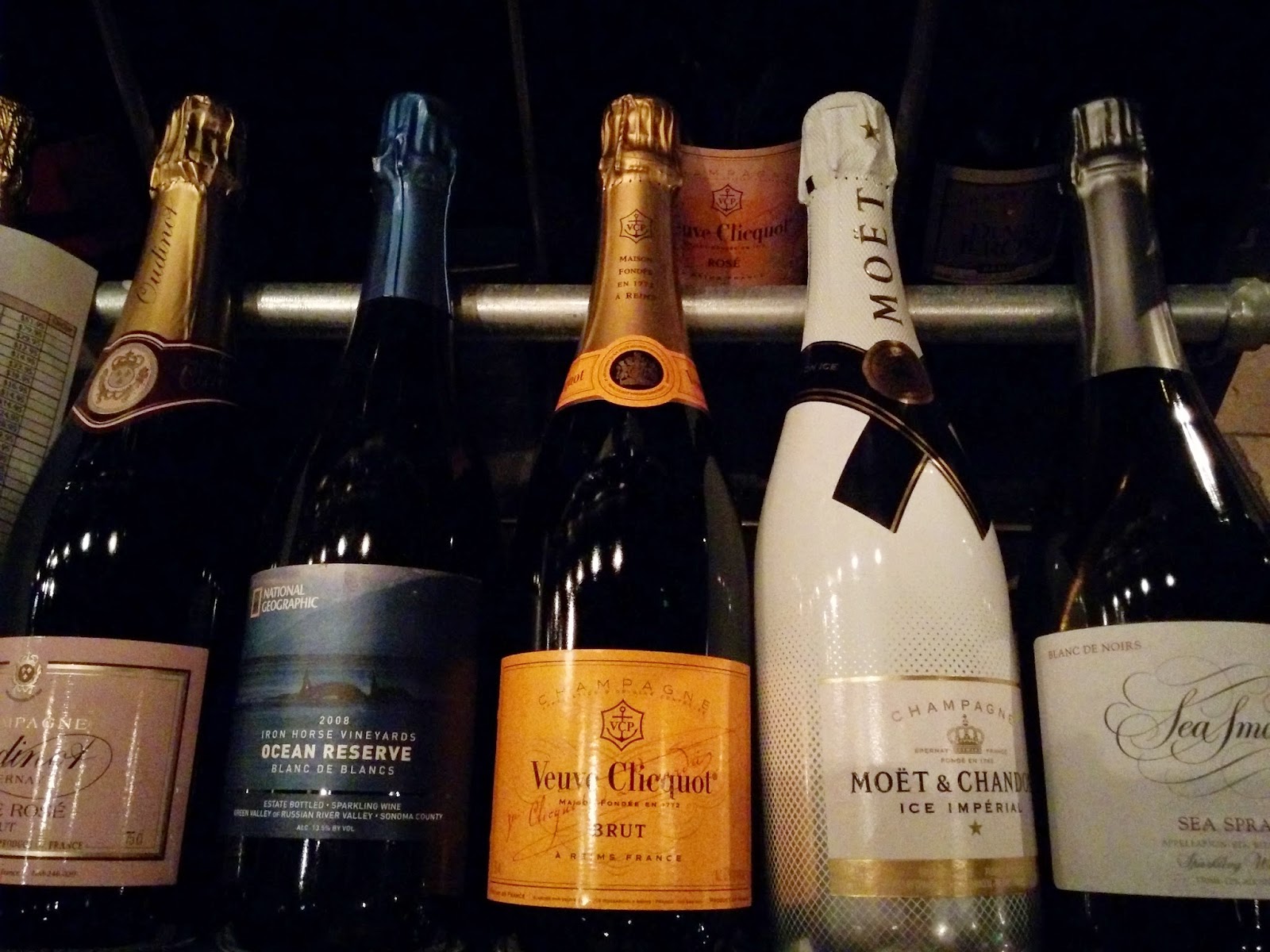 seeing that Iron Horse reminded me of the Jeroboam that we opened for Walter's 50th - a gift from a client for a big case we won on his behalf - it sat in the cellar for years - since I am not a fan of california sparklers I waited for the right place and time to open this baby--- and so when we had a party for all my direct reports and their direct reports etc. to celebrate this occasion - it was the centerpiece (very hard to pour from as well) of the affair. 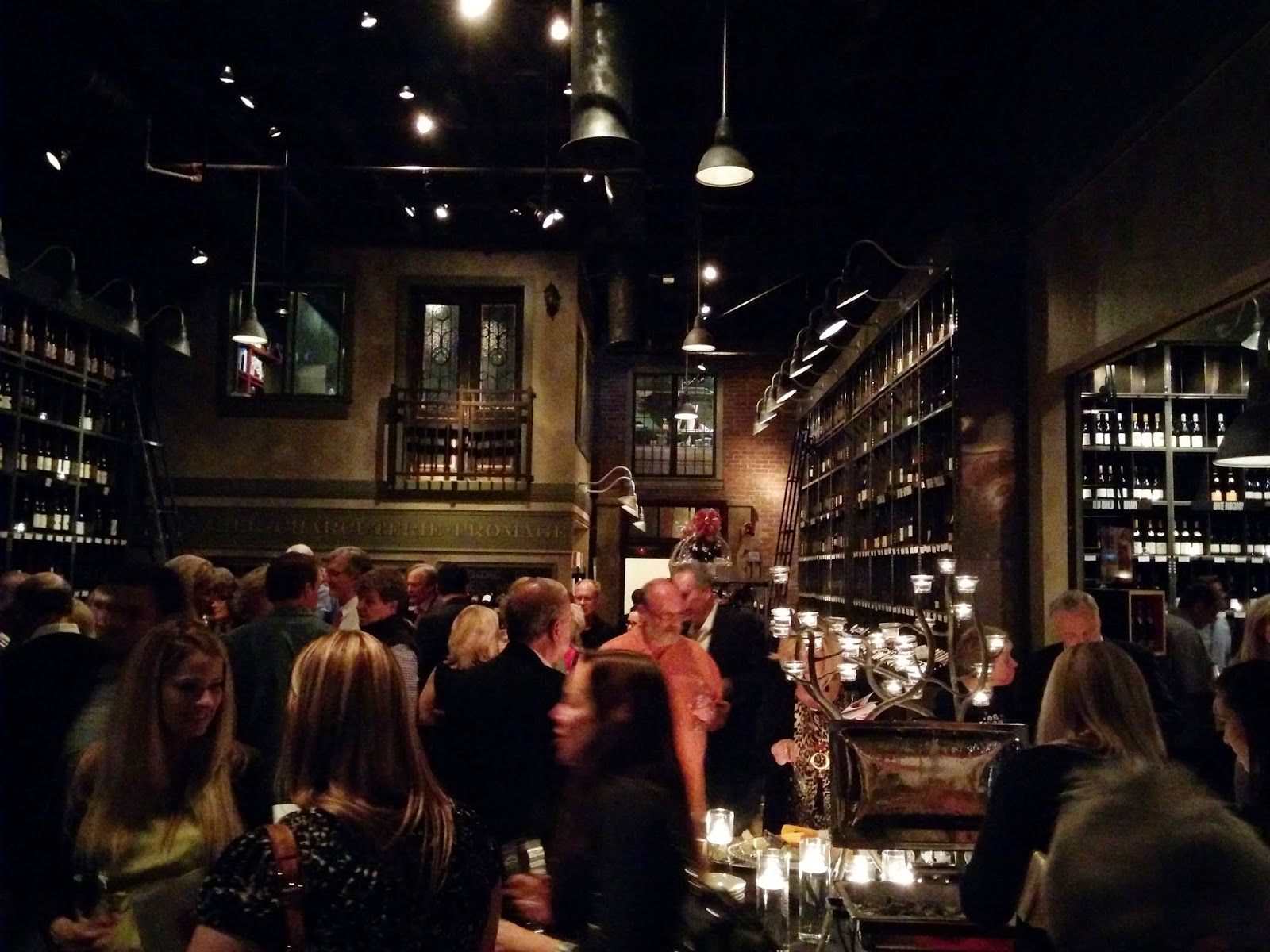 so here is my report on the event: if you need champagne and are seeking moderate prices - check it out... if you are looking for a high end tasting with limited numbers and well versed attendees who understand the etiquette of tastings- this would definitely not be your event.

and an end note - some of the servers even had attitude... when I told the Pol Roger pourer that the Winston Churchill was my favorite champagne he snarkily said "at $400 a bottle it should be" - LOL I didn't mention the four mags of an excellent vintage that I had bought for $100 each...LOL but I should have, because he was just being a jerk.   I found the current vintage on the internet for $185 and some older ones for as low as $130 per/by the case.  Seriously, who needs attitude from the guy who is pouring... and here is the funny thing- I recited this exchange to Phil and later he came back to me to say he had overheard the same guy telling another customer they were $325 a bottle, so it was a moving target. Maybe he didn't like that I wasn't wearing a little black cocktail dress to go to a tasting LOL... or that my car has a Ready for Hillary sticker on the bumper- LOL (soon to be changed to Ready for LIZ!!!!- slayer of Wall Street robber barons! Defender of the masses! LOL)  Life brings humor in pretty much everything if you look at it correctly.

And the bottom line - I still think Michael Klauber a brilliant business man despite not wanting to hang out with last night's clientele... LOL...