while we were there...

they were coming here...

In a strange coincidence - last night we tried a new-to-us place in a strip mall between Sarasota and Bradenton. Located in a completely unassuming location, at the corner of US 41 and State Route 70, is maybe one of the best and most authentic Italian restaurants we have been to in the U.S.

Let me backtrack a little to the title of the post... In October of 2014 - just a little over a year ago we spend a lovely two weeks in northern Italy- recounted in detail in prior posts, so I am only focusing here on FOOD. Everyone knows - or at least everyone who loves the treasured white truffles- that the fall is truffle season. Tartufo Bianco! Although we did not go with friends, many of our wino/foodie friends found ways to get themselves to Italy around the same time, including Neil, and Sheila & Mary, among others from the Chaine des Rotisseurs. It is just "that time of year"...LOL

So off we went- and we had some amazing meals - in restaurants high end and in less upscale family owned - all offering us the best of Italian cuisine!  Here are a few photos- from Bologna and Venice and Trieste- October 2014 - remember that date!

here is an example of a local mom and pop place from Bologna (located a few blocks from the Main Square where the Mortadella Festival was being held!) 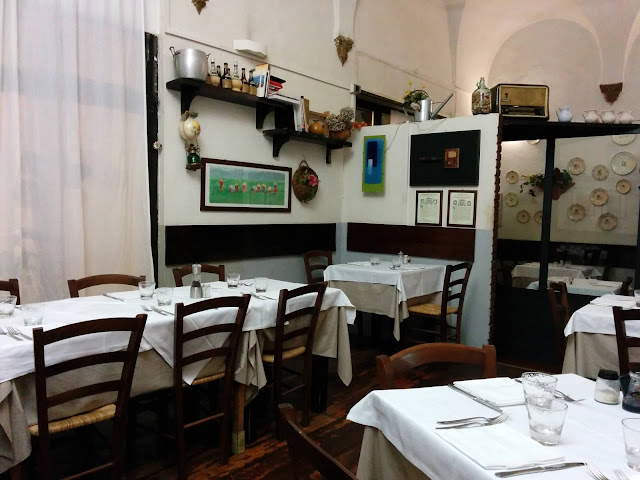 their tagliatelle with tartufo bianco- aaaaaaccccckkk!! I am dying posting this and remembering how OMG good this was! It was so simple but so exquisite in flavor! 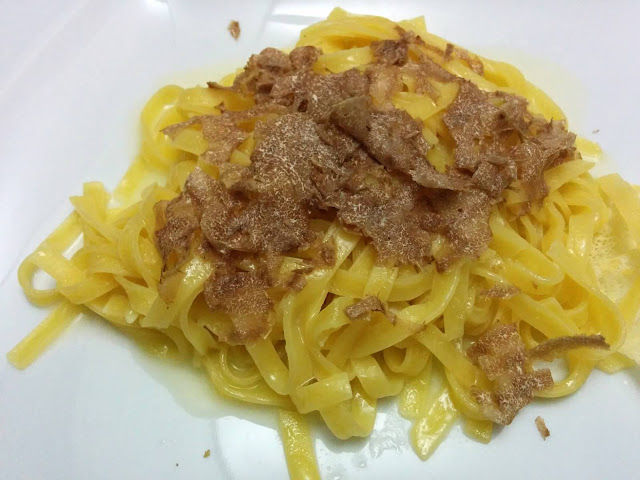 Stuffed zucchini flowers - we had those a number of times as well! 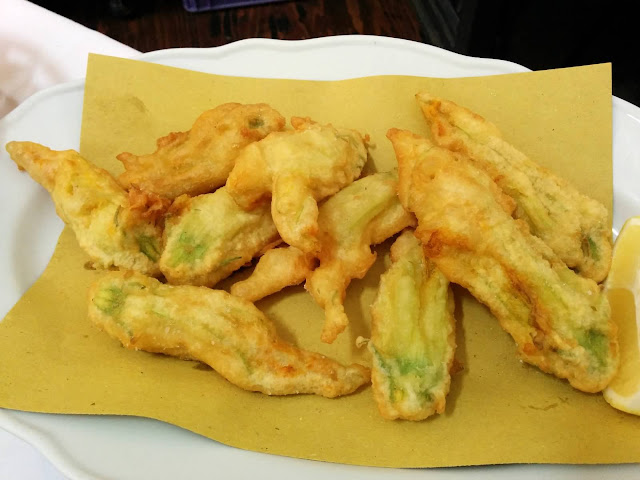 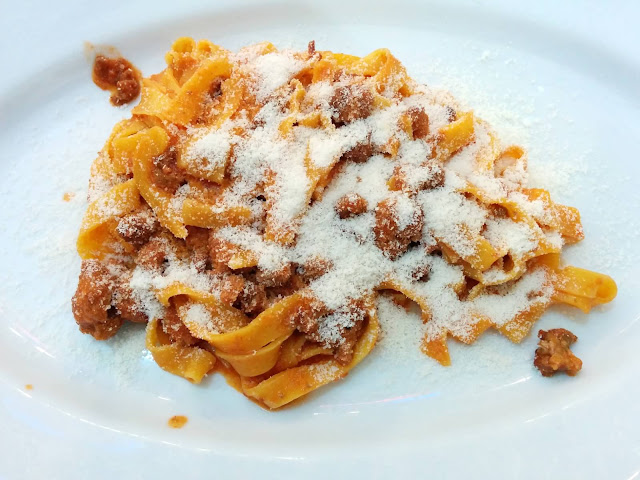 maybe you are getting the idea that we LOVE Italian food--- LOL - just maybe... 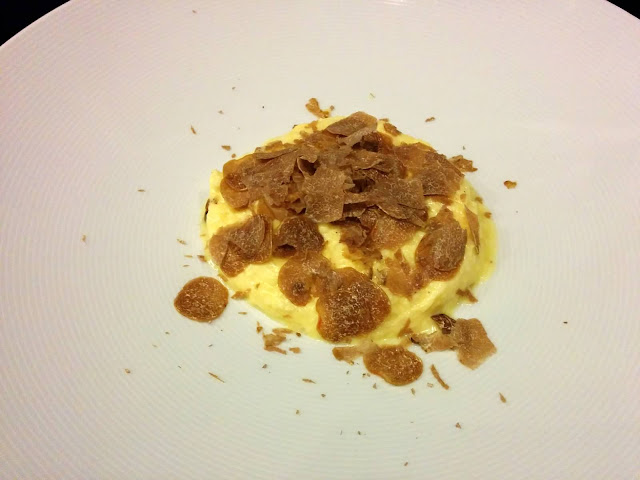 Above and below - dishes from Trieste pepenero pepebianco. 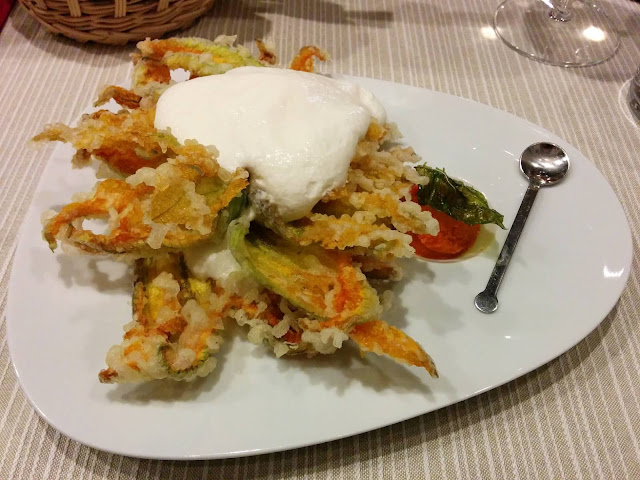 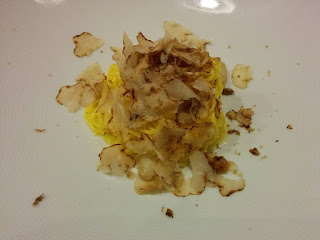 a tartufo bianco pasta dish from Da Fiore in Venice- fancy china gives it away- but seriously the mom and pop places were just as terrific! That's the way it is in Italy 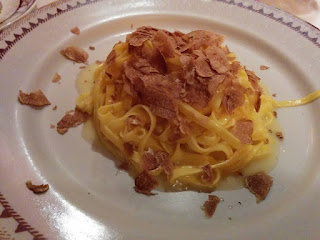 This is a very long intro to the fact that last night's restaurant owners were heading here from the same location, just as we were enjoying the food of their homeland.  Monica - the chef - hails from near Bologna and Luca, her husband, wine guy and front of the house - is from Livorno.  Livorno, where way back when on, our first trip to Italy together (June 1999- I think) Phil and I had a terrific meal in a tiny place along the coast when we were going south from Pisa... just one of those places where you say "that looks like a good place to stop". The owner there picked out all our food for us - no menu to be found.  It was a terrific fish/seafood based meal! And I can't believe I am typing these words at 12:45 before eating!!! LOL

Anyway on to last night at Tiramisu and Luca & Monica, they came over in October 2014 and opened a small strip mall restaurant at US 41 and SR 70 the following month- speaking almost no English but having a lot of talent for food! Almost right away, they had a very positive newspaper review that Phil read and noted and then - being past the mid point of life - we promptly forgot about. Until we saw a blog post about the place a week ago from the Sarasota Foodies blog. Thanks for the reminder!

We called yesterday and asked if they had room for us last night and could we bring wine from our cellar (this is usually not a problem around these parts and corkage fees range from $10-25 if you have an extensive cellar it is really nice to be able to have one of your vintage wines with some of the great cooking that goes on outside your own kitchen!)  The answers were yes and yes (with a corkage fee.) So off we went.

Donna - our friendly and very helpful server could not have been nicer.  She gave us the story of Monica and Luca's start up of Tiramisu (the name of their cozy eatery.) I know you are all waiting for the food - so I am going to go right to the photos- 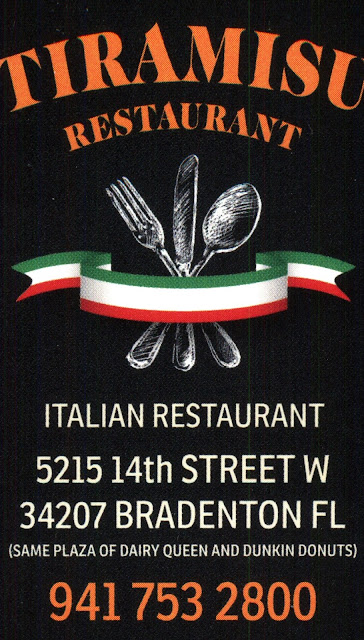 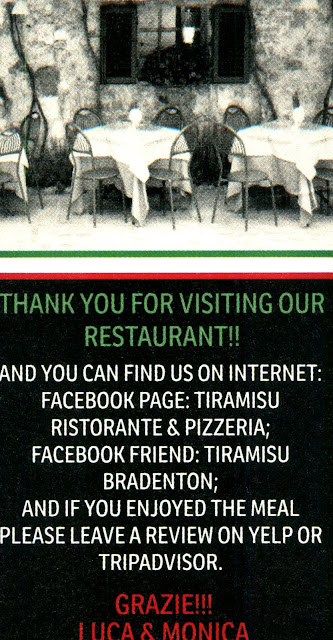 Tuscan yellow walls reminded us right away of being in Italy... 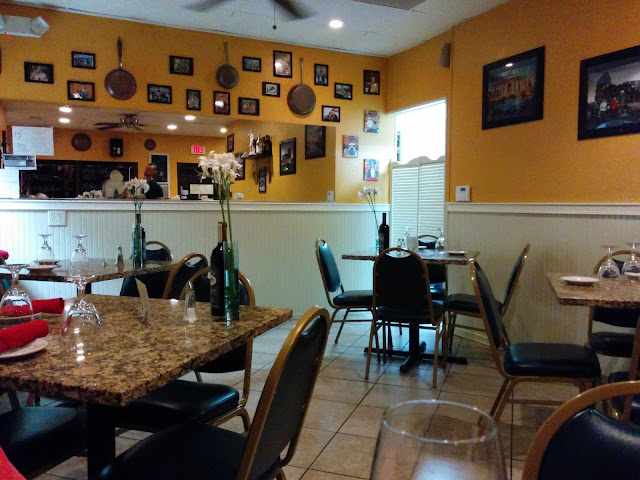 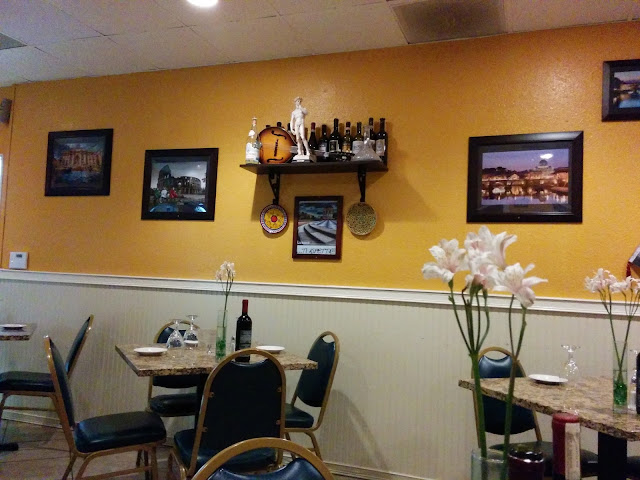 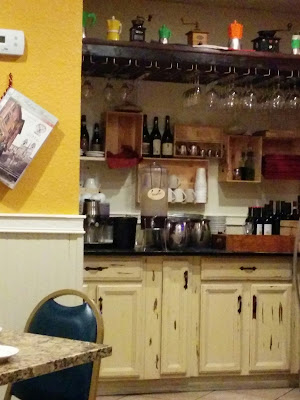 we started with a super antipasti plate for two and enjoyed it very much- our favorite was the bruschetta which was worth coming for on its own. 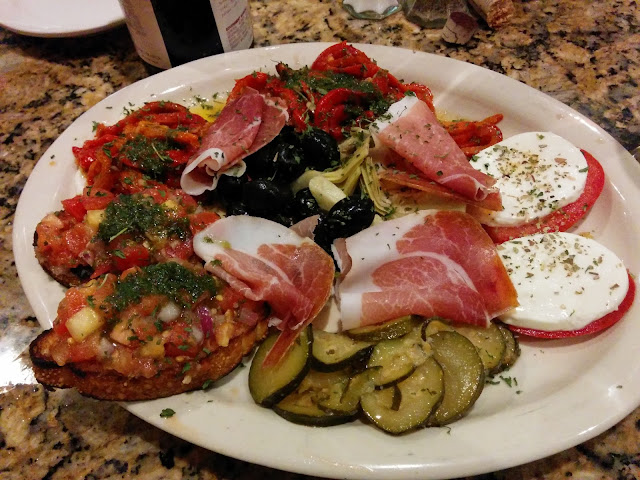 I had to have tagliatelle - my favorite - dating back to before I met Phil - I even remember the place I had it in Florence.  It was called Mama Gina.  There I was introduced to tartufo bianco.  It was in the early 90s yet I still have a distinct memory of the meal.  Mama Gina's is on the street that runs along the Arno in Oltrarno - Borgo San Jacopo - near the Ponte Vecchio.  We met two American guys at the next table (it's a touristy area) and got into conversation with them about what they had to eat that they could recommend.  Well, the rest was history. But I ramble - I am in a reminiscent mood today I guess, LOL.  Anyway, back to Monica's really superb tagliatelle with bolognese sauce...a tad "redder" than I am used to in Italy and also meatier (likely to meet American expectations) but superb pasta! 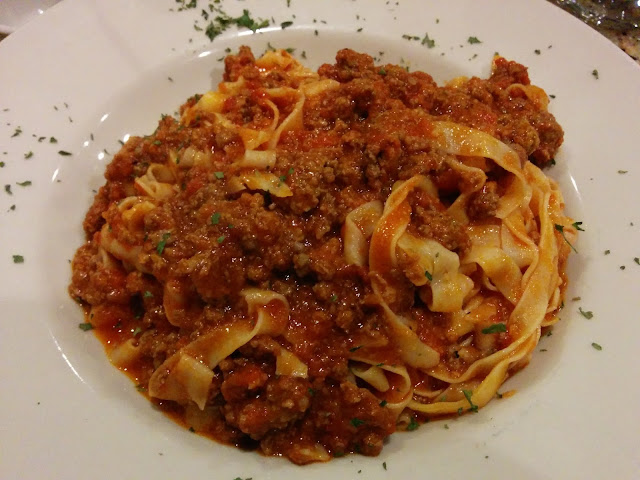 Phil ordered the lasagne bolognese and it was also excellent. 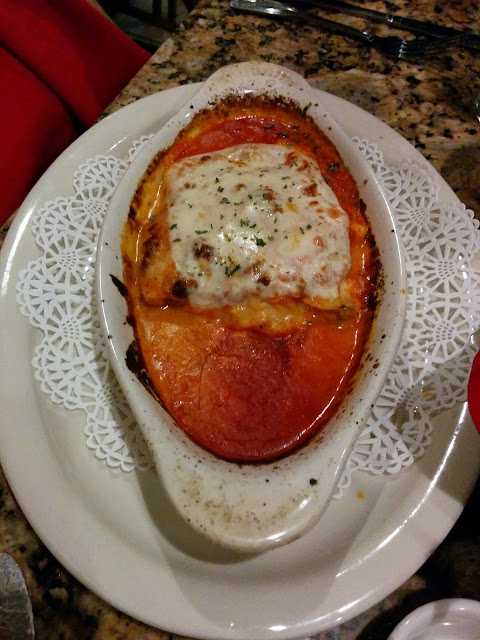 the tiramisu was first rate and Phil ordered the special dessert a cake with pear and hazelnut paste. 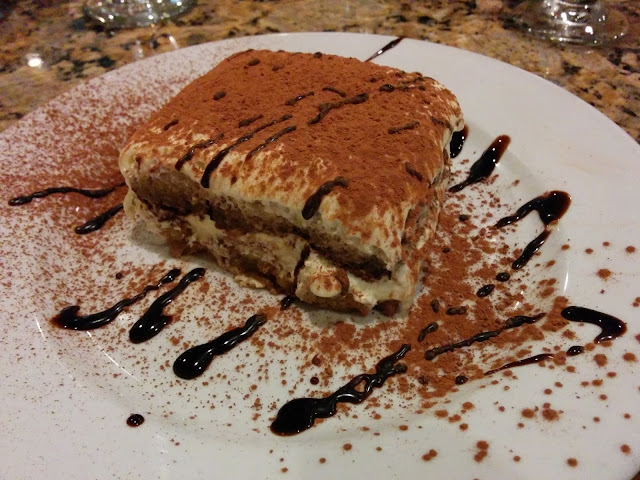 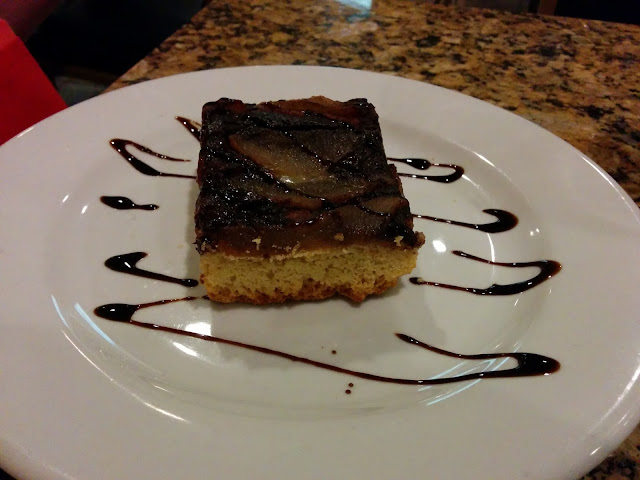 my tiramisu choice was the clear winner.

We do want to mention - despite the fact that we brought an older burgundy (1996) - they have some terrific wines available!  Luca has curated a list of very nice 100% Italian selections which cover many wine areas of Italy.  The pricing is reasonable as well.  We asked if they got truffles in season and Luca explained that they were priced such that they would not be able to, due to the need to sell at a per dish price point far above what their local clientele would be looking for.

The place is first rate and deserves to be super successful.  They are nice people and their food is excellent.  And here is the good news- when the tartufo bianco comes in next fall - they have a carry out menu - so it can BYO truffles to your own house and carry in Monica's terrific tagliatelle.

Luca also has carry out discounts on his wine.  So you can have your carry in with a nice bottle of Italian even if your "cellar" has no Italian. (That reminds me of what a great vintage the 1997 was for Chianti Classico Riservas, how we drank them all, how I was always begging Neil to sell me some of his since he bought more than we did... So see, I AM in a mood today to remember great food, great wines, great trips.)

AND it was Tiramisu that put me in the mood of reliving Italy! It is so authentically Italian.  We WIN having them less than fifteen minutes away! 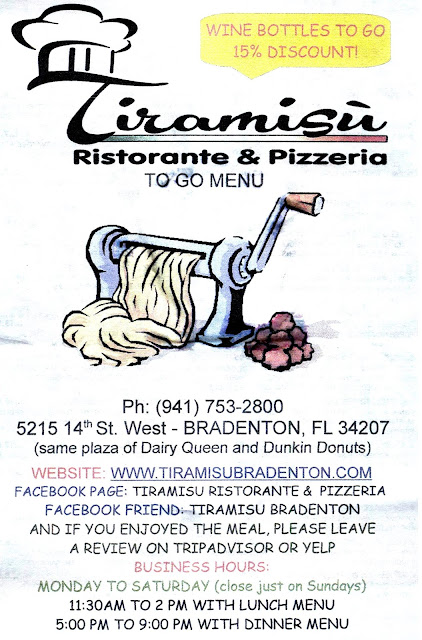 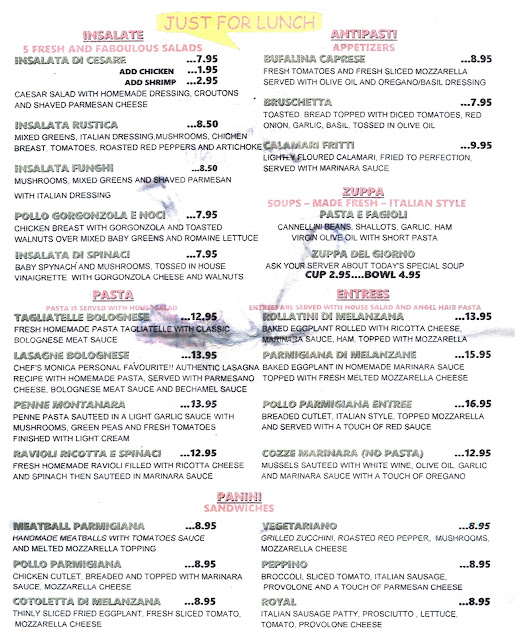 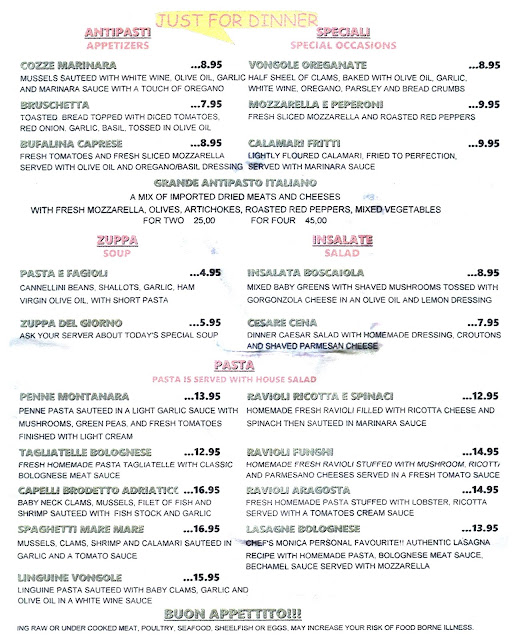 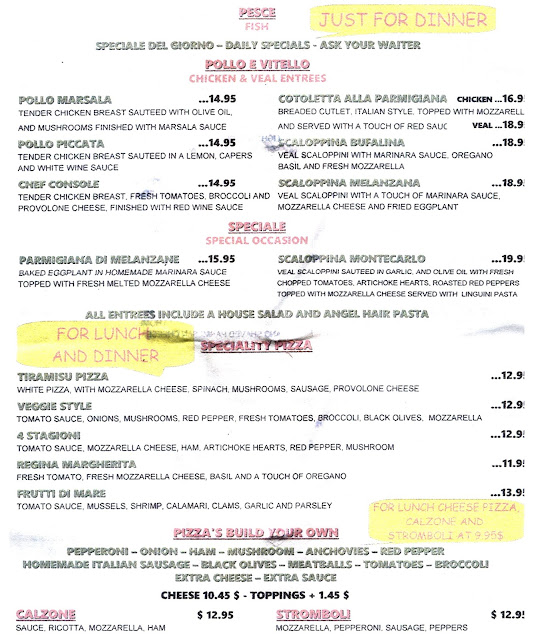 Now all I have to do is finagle Monica into putting Paglia e Fieno on the menu and I will be able to save thousands on airfare and hotels LOL---- and yes, I know I know I owe you more on the Cuba trip. I have not forgotten.
Posted by TOR at 1:43 PM