Some things hold up better than others- and last night was a perfect example.

It's the Fourth of July 1906 in a small town in Connecticut. The members of the Miller family are finishing breakfast. Eleven-year-old Tommy dashes outside to set off fireworks. Mildred, a fifteen-year-old, teases Arthur, her nineteen-year old brother and a football player at Yale. Nat Miller; his wife, Essie; Nat’s sister, Lily; and Essie’s brother, Sid Davis, gather in the living room. Nat is the owner of the local newspaper, and Essie is the devoted wife and mother. Lily and Sid have had an on-and-off relationship for years, currently off because of Sid’s drinking. Lily has agreed to go with Sid to the fireworks display that evening, if he doesn’t return drunk from this afternoon’s picnic.

Richard, nearly seventeen, is the only member of the family who has not come in from breakfast, so his mother expresses concern to the others about some “subversive” books of poetry he is reading. At that point, Richard enters and defends his reading selections. His mother is shocked, but his father proves more understanding.

The family gathering is broken up by David McComber the father of Muriel, Richard’s girlfriend. McComber accuses Richard of trying to corrupt Muriel by writing her love letters with quotations from his books. Miller defends his son, even when McComber, who is one of the paper’s biggest advertisers, threatens to withdraw his ads. McComber says he has punished Muriel, and he has a letter from her for Richard, ending their relationship. Richard is devastated.

The rest of the family leaves Richard alone, and Wint Selby, Arthur’s classmate at Yale, drops by looking for someone to go with him on a double date. Because Arthur is unavailable, Wint hesitantly agrees to take Richard. Nat and Sid come home from the picnic; Sid is drunk. After a disastrous dinner, Sid goes to bed, his date with Lily canceled.

Richard’s “date” turns out to be a rendezvous with prostitutes. He sits in the bar with Belle, a twenty-year-old prostitute, not sure what to do, while Wint is upstairs with Belle’s friend. Although Belle tries to seduce the inexperienced Richard, he stays true to his family and to Muriel. In fact, when Belle leaves Richard’s table for a salesman with money, Richard, a bit drunk, starts a fight with the salesman, whom he believes has insulted Belle.

In the meantime, Richard’s parents are worried about his late hour; and, when he finally does arrive home, drunk and disheveled, Sid (the expert on such matters) comforts him and puts him to bed while his parents discuss what action to take and how to punish their son.

The next day, Nat Miller comes home to lunch and to punish Richard, who is asleep upstairs. Nat and Essie bicker about what to do, and Nat goes back to work, secretly happy to postpone the confrontation. When Richard does come down to the living room, his mother tells him that he must stay in the house. However, almost immediately his sister Mildred comes in with a letter from Muriel promising her love and telling him she will sneak out that night to meet on the beach.

Richard sneaks out of his house before his parents can punish him for the night before and waits on the beach for Muriel. She arrives, and they express their love. After discussing the events of the past twenty-four hours, as well as their future, they kiss for the first time.

Nat and Essie, who are waiting up for their son, discuss possible punishments, and Nat mentions that Muriel’s father has changed his mind about Richard and his daughter. Richard arrives, looking lovestruck, and Essie leaves him with his father. They talk about the dangers of drinking and loose women, and Richard reassures his loving father with his answers. The play ends happily with Richard going out to look at the moon and Nat and Essie kissing and going off to bed.

Yes- that's it.... the whole entire story- and actually it sounds a lot more exciting on paper than it was sitting through the tedium of the 70 minute first act. The play - Ah, Wilderness! was the only "comedy" written by Eugene O'Neill and now we know why...

Let me say that there were a number of good performances - Doug Jones' drunken Uncle Sid, and Kelsey Petersen's Mildred were very good.  The female characters were generally shrewish and what my mother would have called "a pill" - lots of judgments about other people's behavior and very little awareness about their own, especially Peggy Roeder's Lily (a terrific actor in a thankless part.)

Really no point in droning on about it and maybe the play was so perfect a reflection of the times that I make a mistake in judging it by a 2016 viewpoint- but I kept thinking - how sappy the main character was and really - if you are "nearly seventeen" would you be that bald? LOL it was distracting... Oh and I forgot to mention they peppered the play with singing of the barbershop quartet style songs which didn't make my opinion any higher of the production.  Bottom line on both the play and the music: tedious and sappy.... 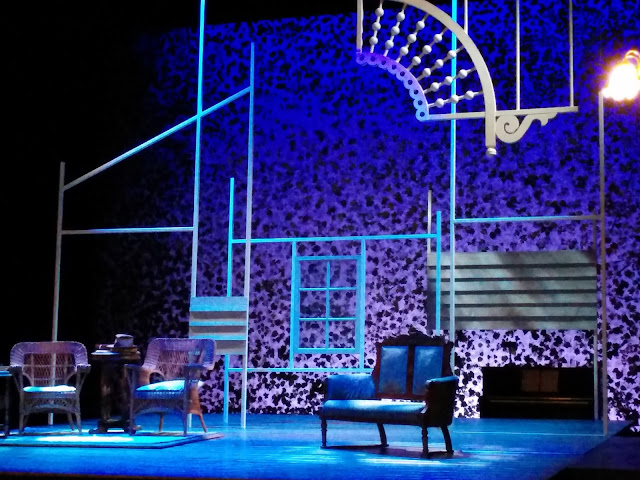 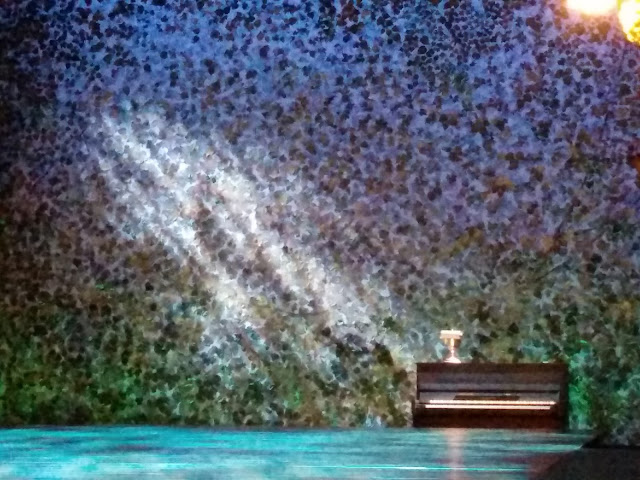 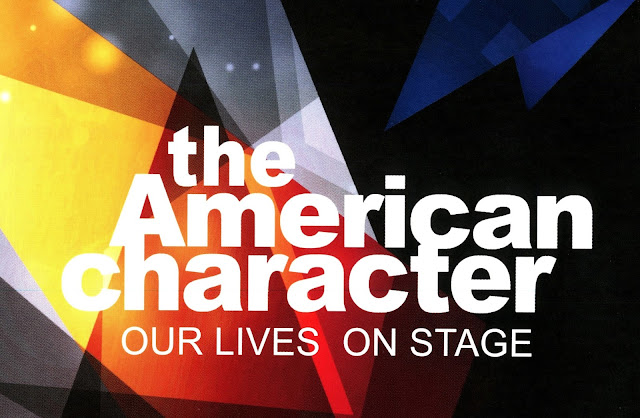 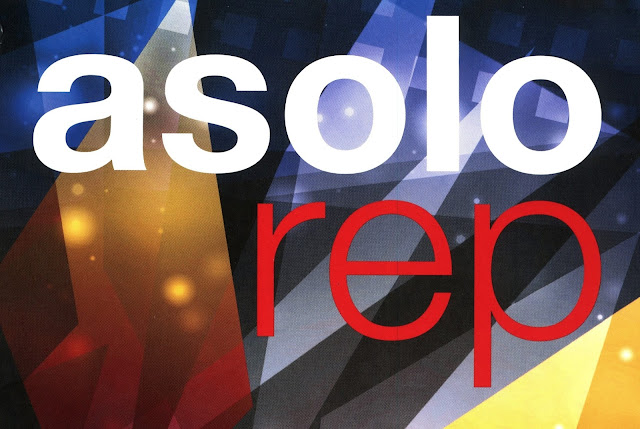 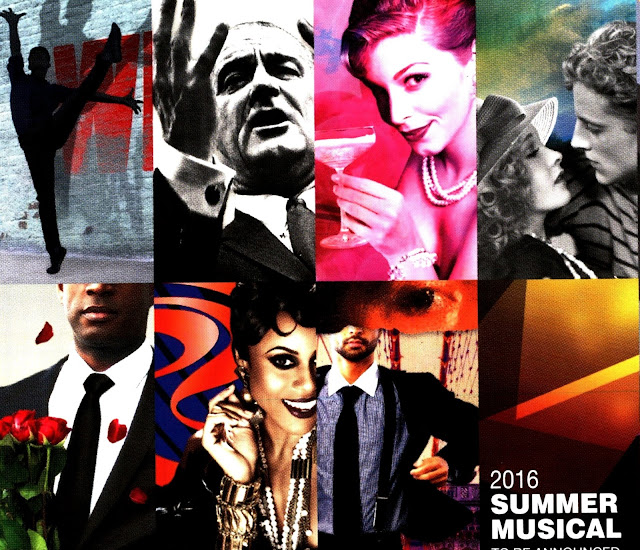 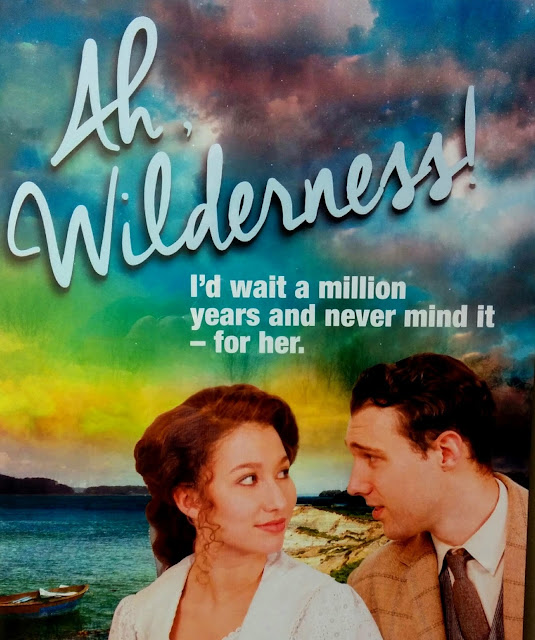 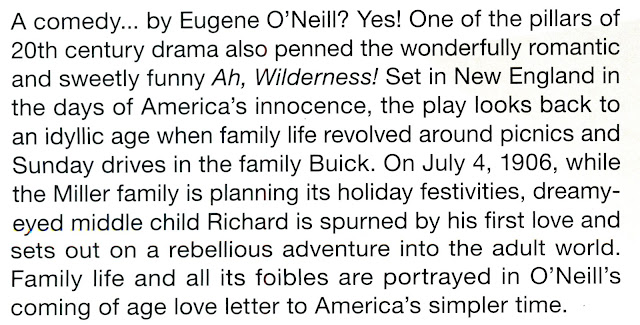 LOL - "rebellious adventure" - seriously? sitting in a bar with a loose woman and having a few drinks is rebellious? See what I mean--- I kept waiting for some kind of tension - but instead we got a different "t" - tedium.  It is actually hard to believe you could make a scene between a teenager and a prostitute so boring but they did it last night... Of course, in 2016 Risky Business seems tame, so this one was sleep inducing (at least for Phil LOL.) 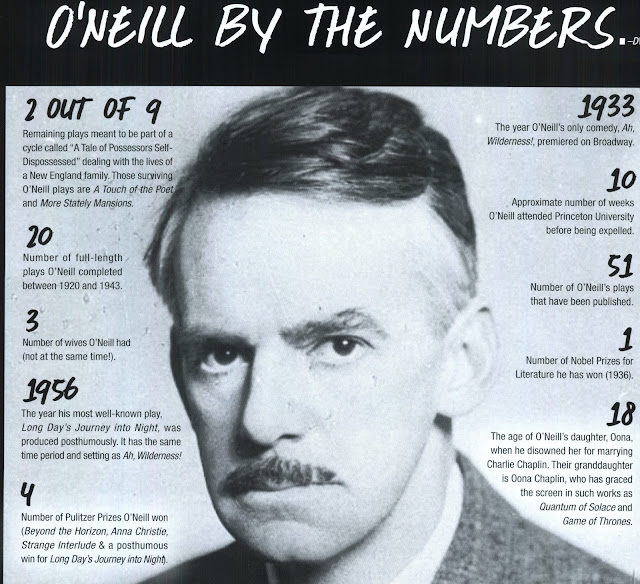 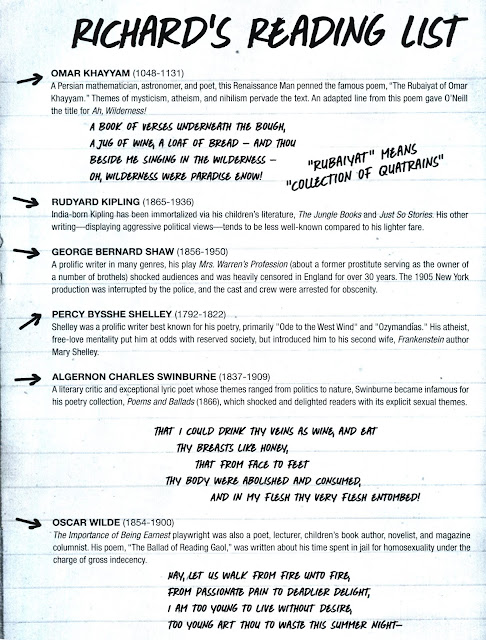 So I say "skip this one" - and go to the circus instead - it too is something from another era (even the same one as the play) and might possibly be a relic of the past - but the next post will give you a better idea of that...  so stay tuned!
Posted by TOR at 10:21 AM