We hadn't been to Beach Bistro in years... the last time we went was sometime after my dad died (2001) but before my mother moved back north in her final years (2008) - we had taken my mom and her friends Charlie and Jane to dinner there to celebrate my mom's birthday and thank Charlie and Jane for being such good friends of my mom's.  The place is the highest rated restaurant on the island where they all lived and where my family has owned property since the 1920s- and also happens to be twenty minutes from where we live now. So when John & Barb suggested dinner there we happily agreed, warning them that it was good but pricey. They said no problem because we would all go early with Barbara (Barb's mom) who we had not yet had a chance to go out with.

We picked them up around 5pm for our 5:30 dinner reservation (Barb had told us it would be early and we could think of it as a late lunch LOL) which was 1. the time they had available- this being "season" and 2. a good time for Barbara to be out as having completed 98 event filled years on the planet, she was not a late night person and options for dining there were slim given how in demand the place is this time of year.  We waited a very brief time in the tiny bar area of this tiny restaurant before being escorted into the dining room overlooking the gulf waters and the sunset view.

We had brought a 2002 Puligny Montrachet (a fairly stiff corkage fee but worth it to be able to bring from our own cellar) Since it had been awhile since we had been there I was somewhat surprised to see how little the place had changed (I guess why fix it when it isn't broken...)  We were the second table escorted in and I thought the room smelled a little musty but once the place was in full swing I no longer noticed it. Very shortly - no later than 6 pm - the place was full. I am estimating but I am guessing they can't serve more than about 40 people there maximum.   The dining room ceiling is draped in tent like red cloth and the walls are mirrored giving the illusion of more space but also giving every one a view in one way or another of the sunset.  I realized that this is why the early table were all filled - it wasn't only that is a popular place - we were coming at the most popular time - sunset on the waters being a big deal here. 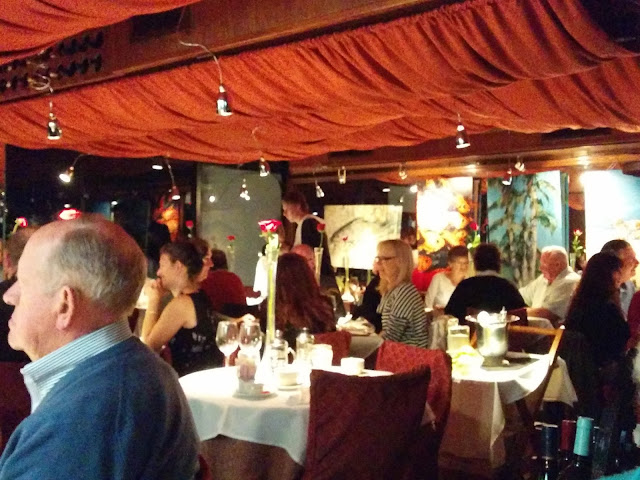 the view on the way to being seated- 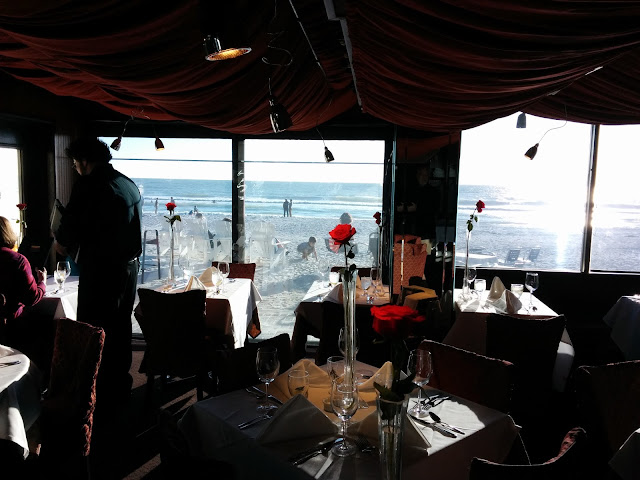 sunset time but our table was so far in the corner we mostly saw it reflected in the mirrors which was actually quite lovely- the room just glowed... 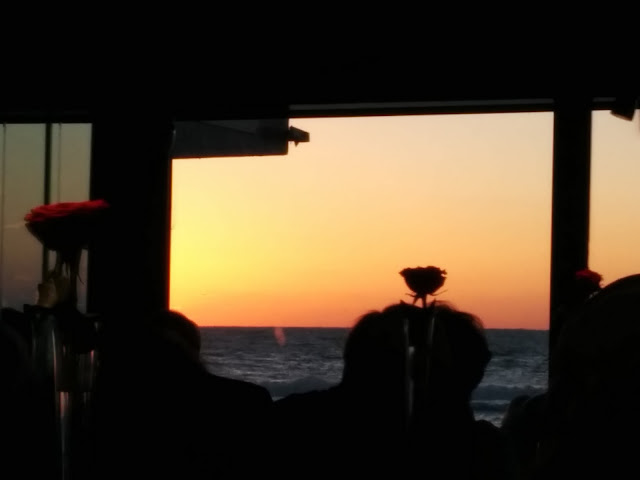 here are two shots I took on the way in - one by the front door - cute fish motif going on there and one in the bar of the ceiling where they are many "mementos" hanging. 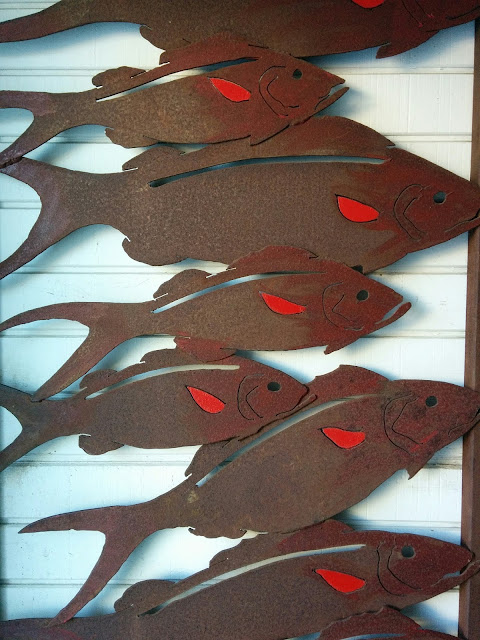 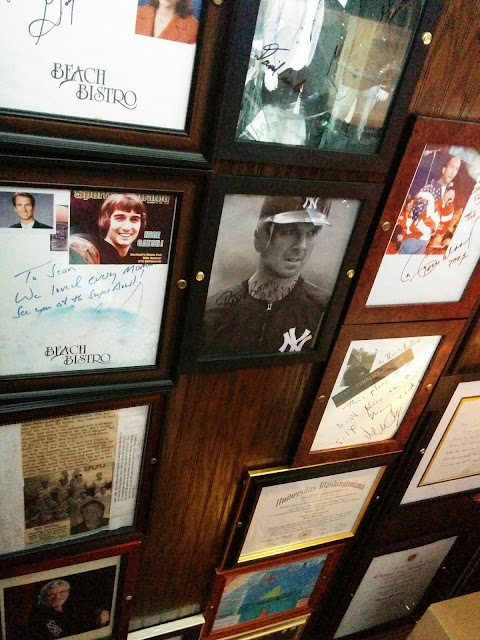 The bar is extremely cozy and the whole ambience is one of an old beach bum bar from the era when I was first coming to the island and I was wishing I had been here, at this very place, before it became a fancy restaurant because I bet it was a terrific dive bar where old wrinkled tanned-like-leather guys hung out shirtless, in shorts and huaraches, in the afternoons waiting for the sunset... Those men - so common a sight here in my youth are virtually non existent now.... but I am sure there are ghosts them in this place.... 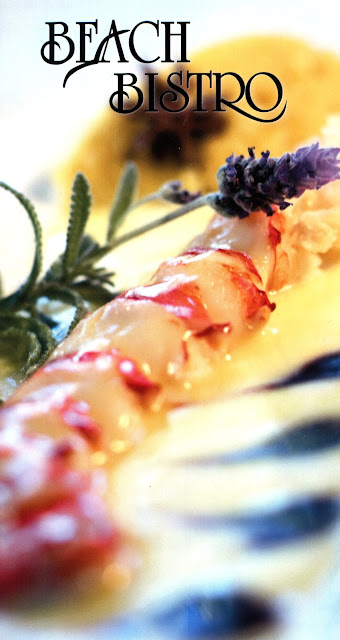 But I have digressed- back to dinner- We placed orders for starters and they delivered a cute little focaccia with three toppings and some terrific tomato blue cheese soup...

Starters arrived - the foie gras bread pudding for Phil, shrimp & lobster for me, and three salads for Barb, John & Barbara. 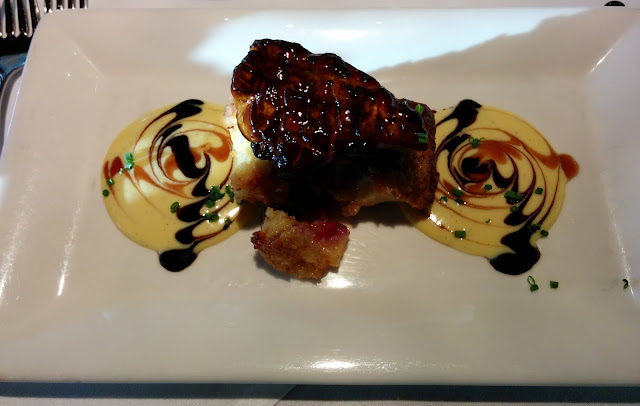 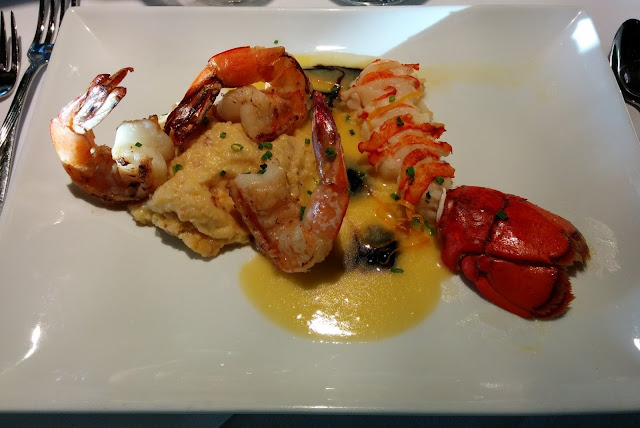 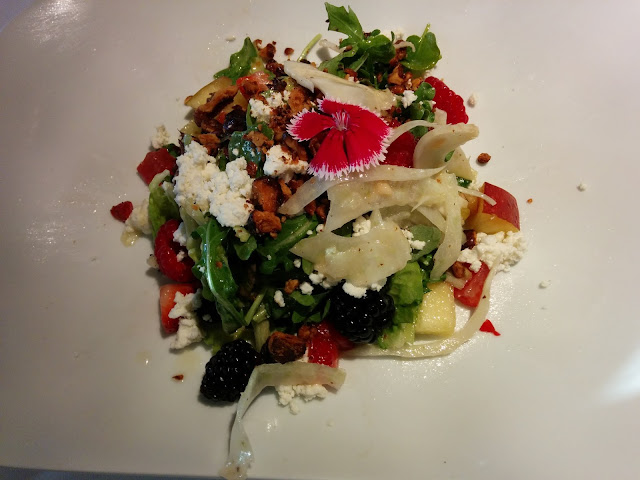 Then the mains came - Barb & John had the sheep's head fish and Barbara the rack of lamb, Phil a bouillabaisse and I had a grouper preparation. 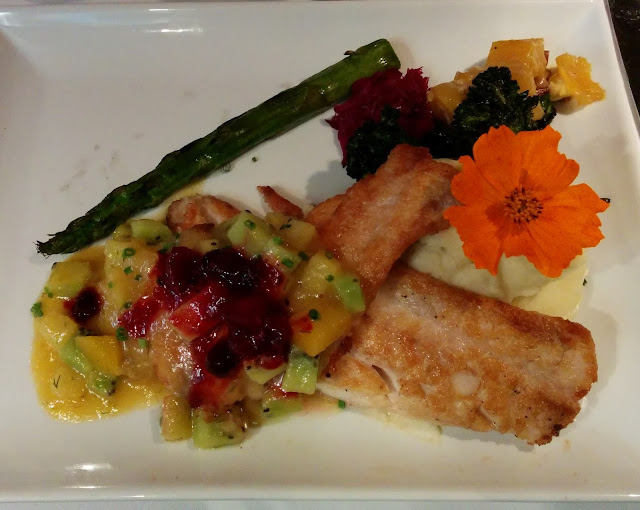 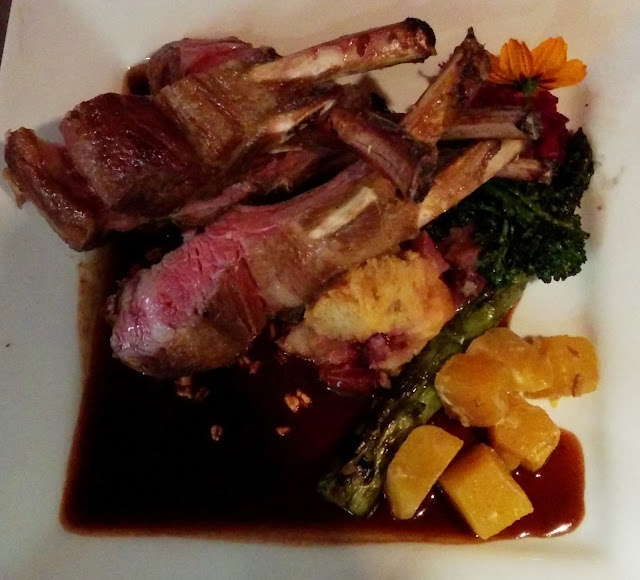 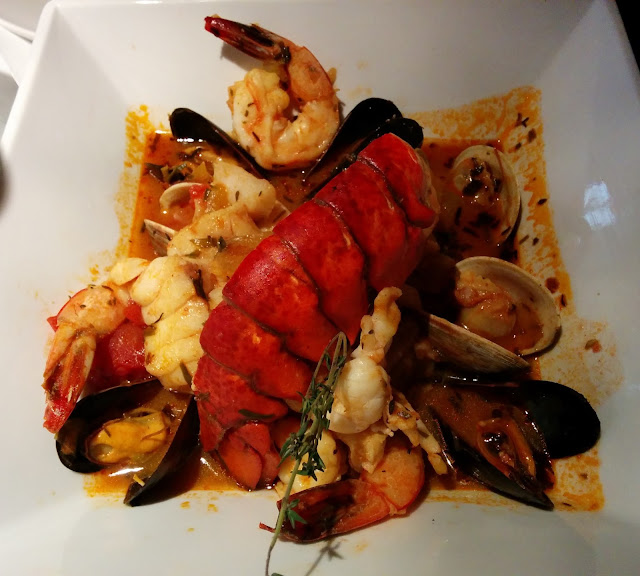 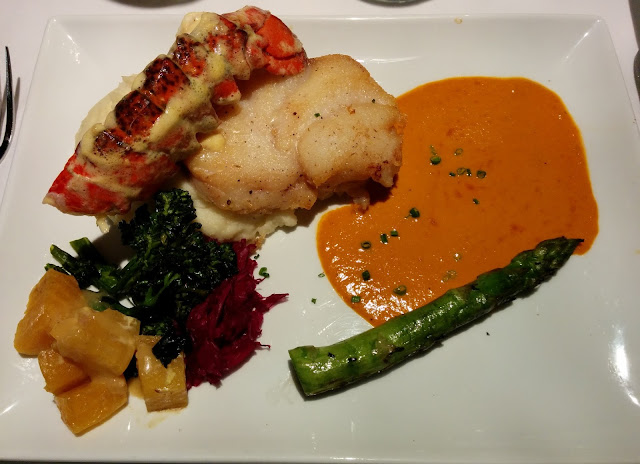 The dessert courses sounded good so we each ordered (after all we were celebrating dinner out with Barbara - we HAD to have dessert, LOL) John & I had gingerbread pudding with ginger flecked ice cream.  Phil had a chocolate truffle terrine and Barb had the "Hat Trick" trio of mini creme brulees.  Barbara ordered a praline dessert and was served key lime pie LOL - so they needed to correct that but it resulted in a photo of the key lime pie dessert and then when the praline one came I forgot to take a picture of it LOL 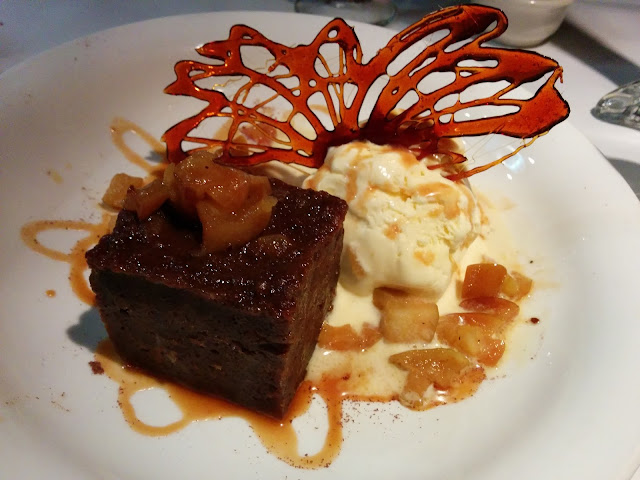 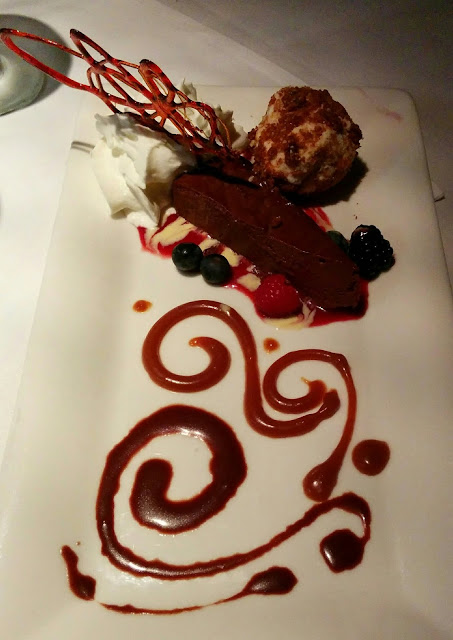 sorry couldn't find the mini creme brulees (must have fallen down on the job LOL) and here is the key lime pie that we sent back for the right order of the praline... but that photo is also missing :-(

We sat at the table a while after getting the check (which was brought without request) talking and then moved our party to John & Barb's for a couple of spirited rounds of Rummikub which we have become quite addicted to.  Phil trounced us all in the second round leaving Barbara without having yet laid down her meld... he was quite cut throat (no helping little old ladies across the street from him LOL)

So we had a lovely dinner.  I wished the food was just a little bit better - no wow factor here - living on prior laurels I think.  The meal was lovely but at the prices they charge it should have been outstanding.  We are well and truly spoiled in Chicago, being ten minutes from our two favorite neighborhood places - 42 grams and goosefoot (respectively Michelin Two stars and Michelin One star) so it is tough to leave the city and come to a beach town expecting them to meet that standard. However that being said- I think they could notch it up a bit to meet their price point...

great fun with great friends - what's not to like... in the end nothing because the meal is a memory but the friendship a living ongoing relationship- and that is where to hold the focus... can't ask for better than that- life is good!
Posted by TOR at 11:20 AM