So it has been a whirlwind couple of weeks - from April 1st when we were in Chicago to close on one of the buildings we owned in partnership; to finding a condo on the way to the airport; to the film festival starting the next day for us.... I saw a boat-load of films, mostly excellent- actually if you count the shorts (which varied in length from really really short to short but longer than you might think LOL) I saw 23 films in four days... and still my favorite looking back from the perspective of an additional week or more was  "Nothing Left Unsaid" a film about Gloria Vanderbilt and Anderson Cooper.

We hopped on a plane, during what would have been day five for us of the SFF, because we were in process with selling our house in Chicago (eventually to move to a condo- more on that later) so we arrived late on Wednesday night and immediately got to work on sorting and pitching and piling things in the house.  We grabbed a bite to eat late that night at the HUB (a fast food diner kind of place near us) and went back to work... I packed 12 place settings of china for Angela and another 12 place settings for one of the Heltman kids (not sure which one agreed to take their great grandmother's china- or if it was just their mom who said she would take it) and then 8 more place settings went to our cleaning woman Socorro. If you are counting that is a lot of china especially the two 12 place setting groups, which being roughly 100 years old, have more than five pieces in each place setting... different era. And in case you were starting to think we were down to paper plates for ourselves- no, we still have 12 of the iron stone Phil's grandmother gave to him when he set up his first household. Everything has sentimental value by the time you reach this stage in life and it is real process learning to let go of things, even when you KNOW you don't need them anymore.

Also in the "gave away" category a fireplace screen and copper wash tub used for a couple of generations in my family - one of those peacock/phoenix fan shaped brass ones (photo below) - the tub carried firewood for countless fires my dad built in many homes we lived in over the years. We let go of my great grandmother's Victorian buffet and my parent's kitchen china cabinet, which had served me for many years and was last seen in the kitchen eating area of our Roscoe apartment.  A desk my parent's bought in 1967 for the room we called "the library" at our house in Chagrin Falls, Ohio left for a new home.  A Queen sized bed, three couches, three love seats and four upholstered chairs left along with boxes and boxes and boxes of stuff. (photo of couches ready for pickup in the alley behind our house) LOL 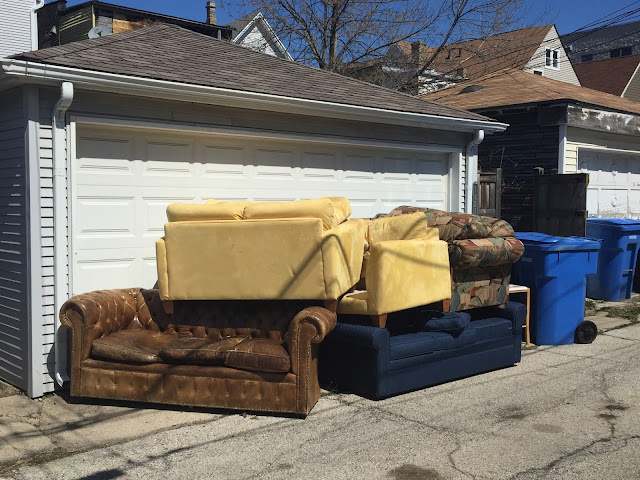 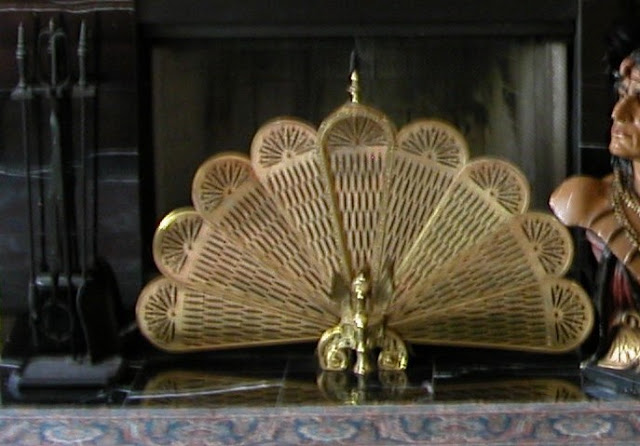 it is a process of learning to let go and lighten the load - but it takes an inordinate amount of time because everything has a story.  More than two decades ago my parents went through this and I became the curator of my family's museum... which worked fairly well when I had a three bedroom house of my own- but then I met Phil - who had his own museum and added two more bedrooms and a house full of stuff to the mix....

When we moved in together on Roscoe part of the reason we picked that apartment of the ones in buildings he owned was that it had five bedrooms and three bathrooms and eleven closets - so neither of us had to cull the collections of STUFF we had in order to check out the next level of the relationship. The other part of why we moved to Roscoe was the roofdeck- and more on that later as well since it ties in quite nicely with the condo story...

so back to packing up our house of a dozen years--- we did that work for four days- four very very full days... and Phil took countless loads to our local recycling location (called the alley- in Chicago)- the scavengers had scented the blood of a move out and were on patrol about every half hour to ensure they got first pick of the things that found their way there.  A giant stack of items rose near the front door for the cleaning ladies to sort through and take to their neighbors and church groups... by now we were running a business- LOL

so thoroughly exhausted each day we chose a new place to eat - one night we had Lao Sze Chuan and another we went to Sun Wah for duck and one night to the local diner Golden Nugget (open all the time!) We had lunches at Mr. Beef on Orleans while scoping out the storage lockers that would be the temporary home for our stuff and at Byron's (best greasy cheeseburgers in town) when we needed something quick and nearby... and we went to the korean taco place around the corner.... all we did was sort, pitch and eat for four solid days.... meanwhile people came and went to help carry things away... Angela & Jeremy you can thank us now for handling this before it fell to you LOL!

Eventually the moving crew came and spent one day (five guys) packing what we had left and one day(same five guys) moving what we had left into three storage locker. Then Socorro and Fernanda came and cleaned one last time on Berwyn making sure everything looked as good as it could for the new owners.  We had one day of rest a chilly rainy day in a hotel room near where we have a rented garage for Phil's Chicago car in the winter. We walked two doors down to my favorite Mexican place in the city and indulged there with drinks and too much food... and we made calls to turn off the alarm service, the gas, the electric, the phone, the VOIP phones, the cable --- you think you can just walk away and move out? NO - there are a million small details.

And on the afternoon of April 14th - 12 years and 1 month and 1 week after we moved into the house - it got a new owner at a closing at the title company.  A nice newly wed couple who seemed very happy as they looked to their future.

We celebrated the closing with Neil, a terrific blanc de blancs Gosset Champagne and a fabulous 1978 Burgundy, and mixed emotions that night at Anteprima.  The food was great and Marty was at the front of the house and all was well with dinner - and with the sale - by now the drama was on the "buy" side.... Our contract negotiation period had expired - we had gone through the inspection and with no mortgage contingency we were all in forward motion when the seller decided to have a melt down with her agent and lawyer over the phone.  So having found the condo we really really wanted - now what? LOL

I can't give you the end of the story but I can give you some information on why this is the place we want... to do that I will go back in time to Roscoe... our apartment there was on the top floor - a fourth floor walk up - fifty - count them fifty steps to the front door.....LOL we were young(er)!

But the main reason I chose that apartment over others in the buildings Phil managed and owned in various partnerships- was the roof deck---  I was selling my cute little "girls house" with a yard and I wanted out door space - and Roscoe had it .... my cute house and yard- the resin table makes an appearance from its first home at 2033 Mohawk and then on LaCrosse and again on the roof deck and finally to Berwyn - at least ten years of use- not  bad for a Great Ace special... 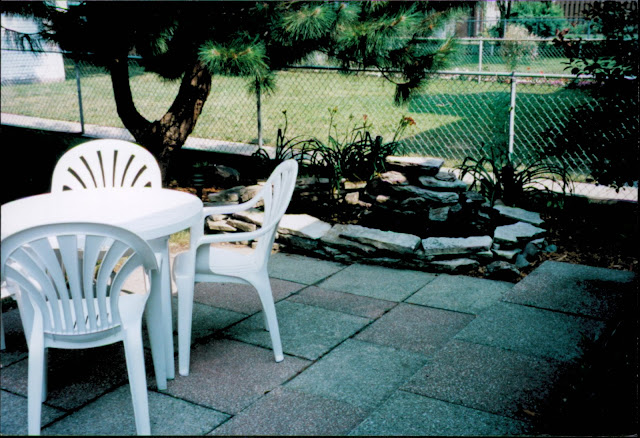 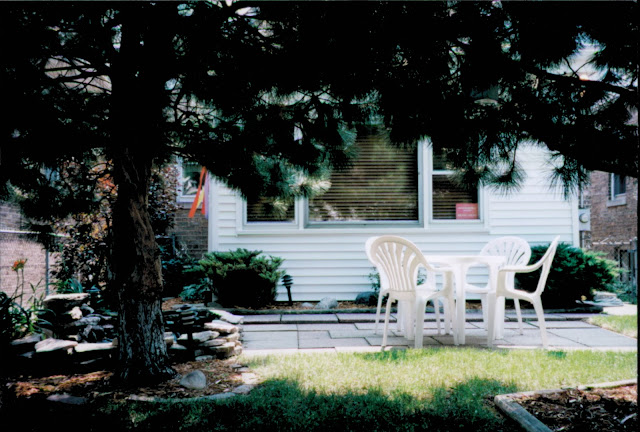 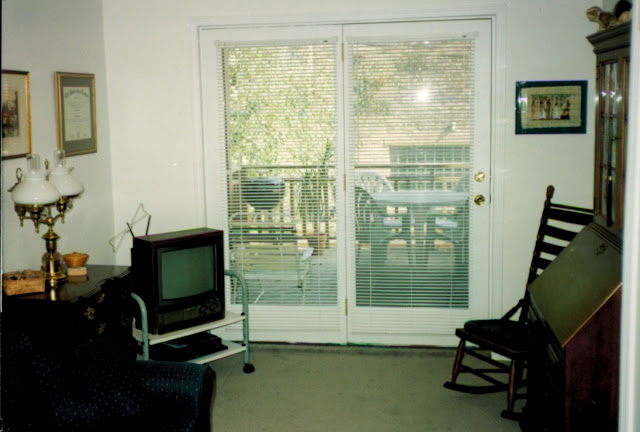 On the roof deck, we had room for two tables so we could have friends over for dinner and we grew tomatoes and beans and herbs and flowers in pots and Trina loved it--- she basked in the sun as much as she could - even when she was so old she couldn't walk up the flight of stairs to get there and had to be carried - she would cry at the kitchen door for someone to take her up - up - up on the roof.... 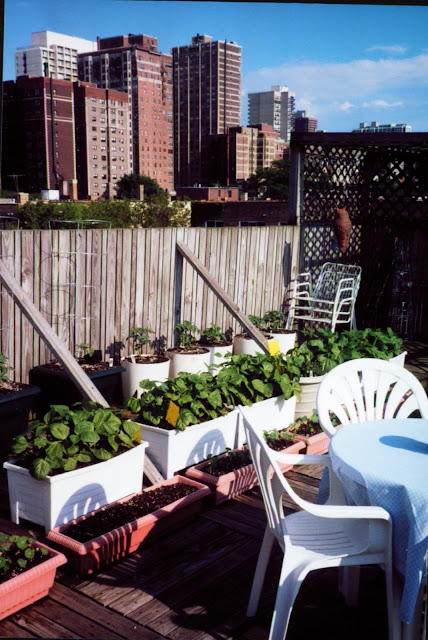 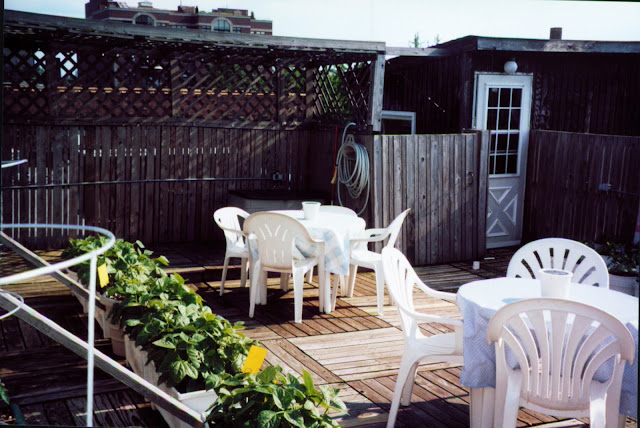 eventually the shaded area came down when we had to tear up the roof deck for roof repairs and then rebuild it in the spring- but we LOVED this space so much and missed that feeling of being on top of the world when we moved to Berwyn (which was much fancier but didn't have the same feeling of free space the roof deck did.) below photo of rebuilt deck without the shaded area- the hose stayed in the same place for orientation- LOL 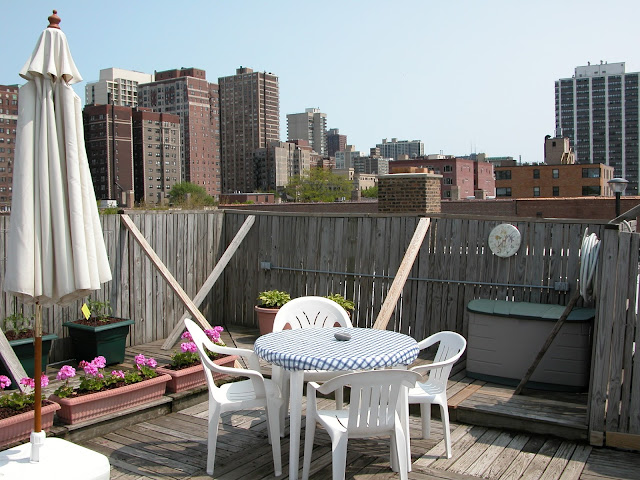 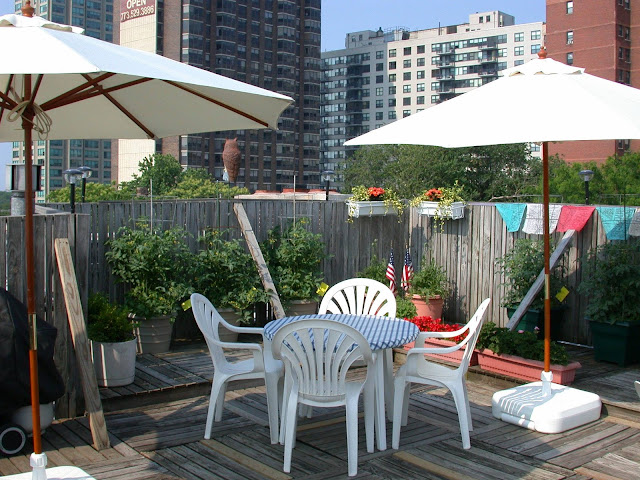 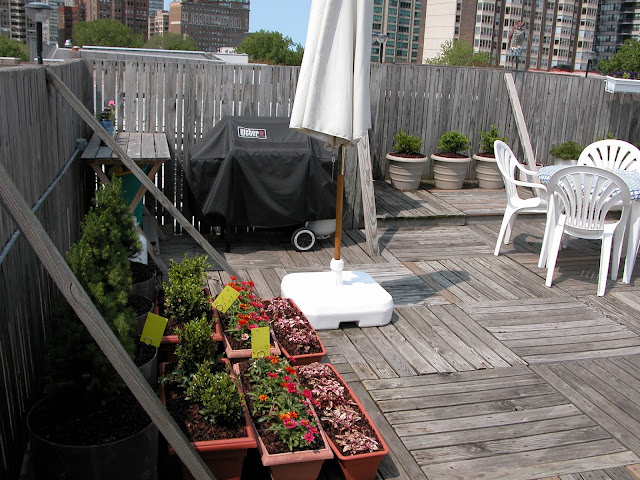 Trina sunbathing on a chair on her roof deck 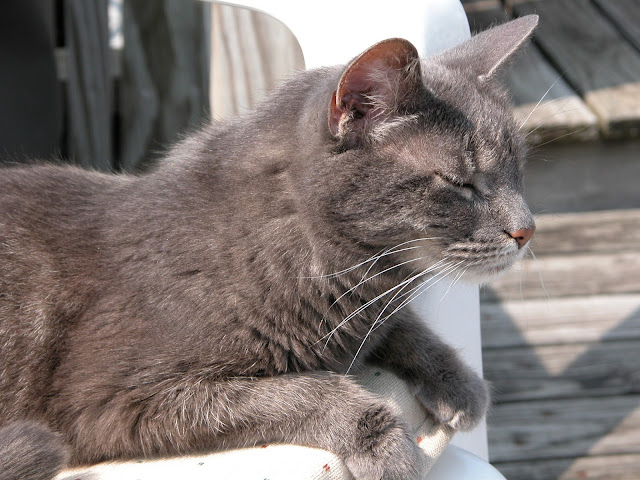 we had some great nights up there- - - - back when Mark & Laura were newly weds and we hadn't yet tied the knot...and the moon was full and the lights of the apartments along Lakeshore Drive were like stars to us... 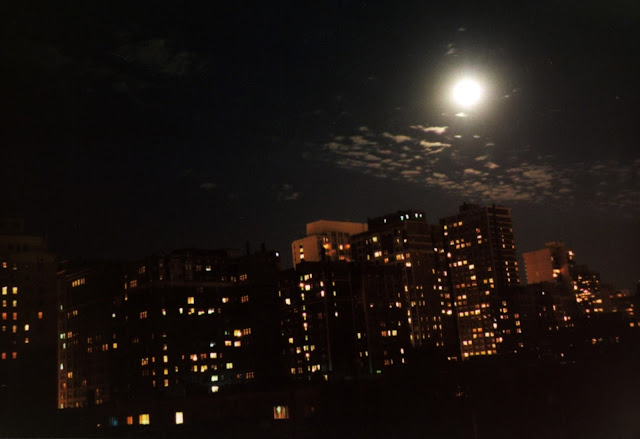 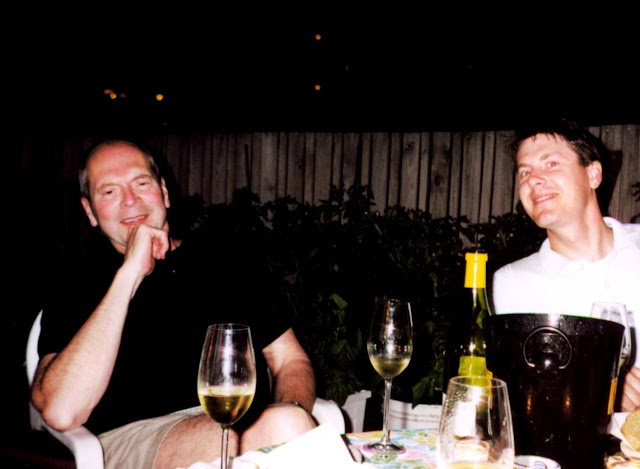 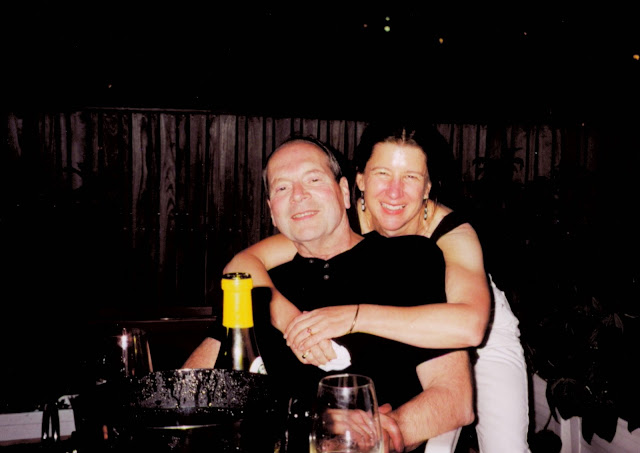 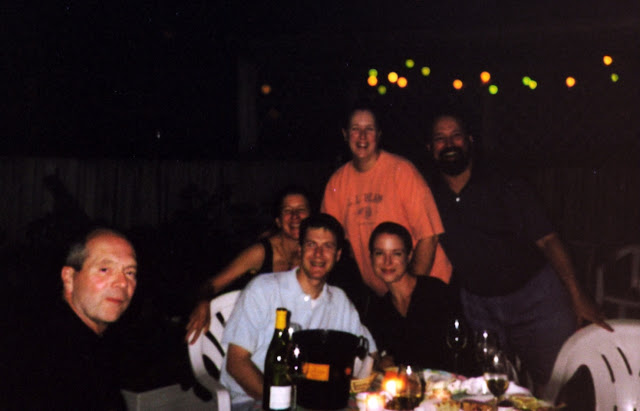 Remember the resin table? Here it is in the early Berwyn days- LOL 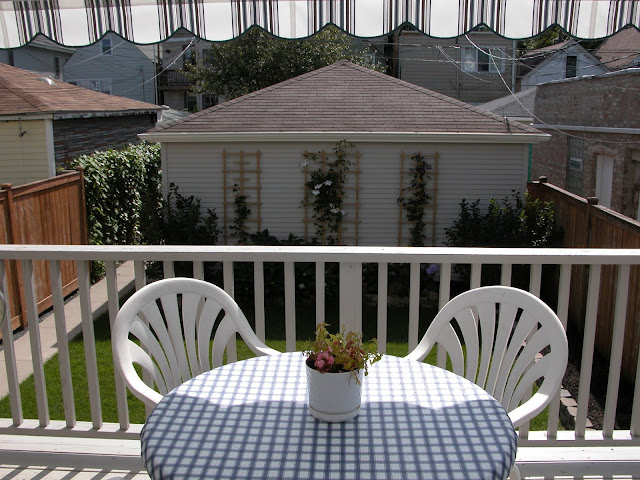 We spent a good deal of time and lots of money over the dozen years at Berwyn making the outdoor space into a welcoming venue for entertaining and living day to day outdoors... many many nights of parties with same friends and more over that time--- some terrific memories and some amazing wines shared with our "wino" friends... 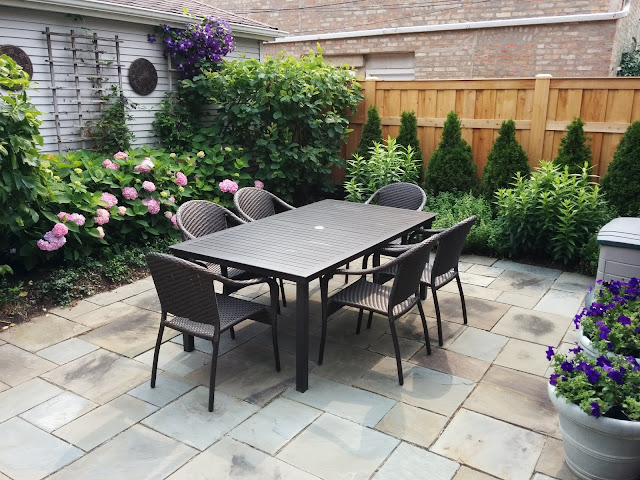 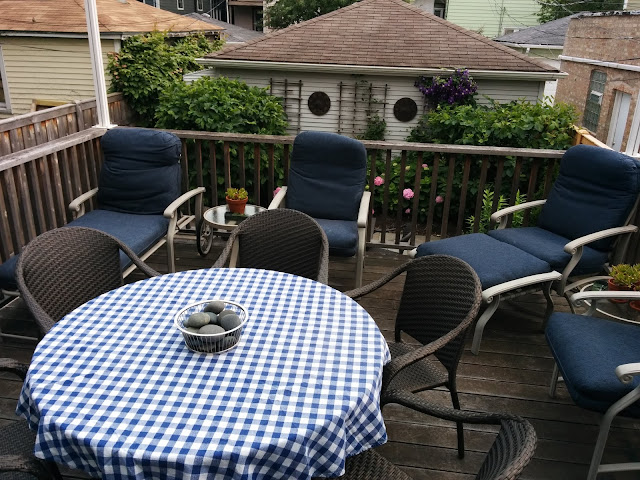 
so when we decided to go to a condo for our part time Chicago residence we knew exactly what we were looking for - a condo blah blah blah WITH OUTDOOR SPACE so we would not be reduced to living inside during Chicago's mostly glorious summers...

See it does all tie in together- LOL- so we have found the condo and we know it will work out somehow- moving date is currently scheduled for lucky Friday the 13th (we moved in and out of Berwyn on Tuesdays - Jewish superstition so we are trying a new superstition group...LOL) 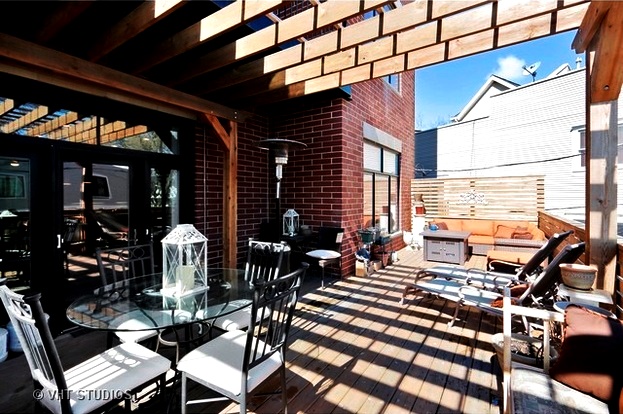 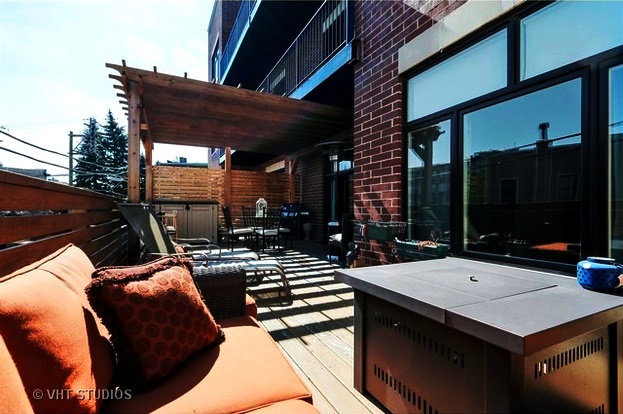 meanwhile - I am going through the cleaning and closing up of the Florida place and enjoying my outdoor space here before we head north... I guess I sound like a broken record LOL but you can tell I am really attached to outdoor space- I think it might be claustrophobia--- LOL

two views each of front screened courtyard and back screened porch - 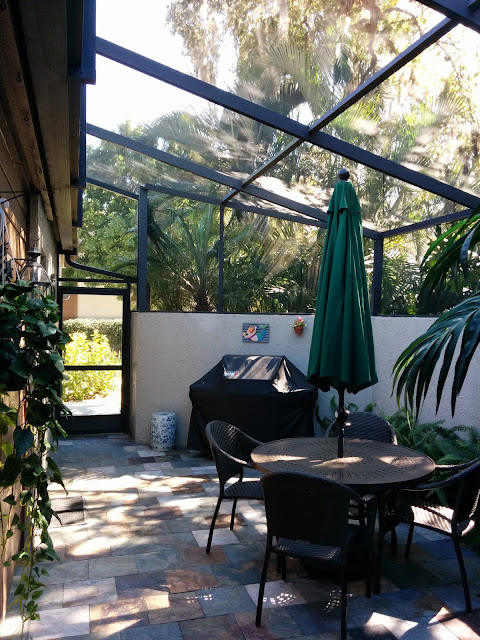 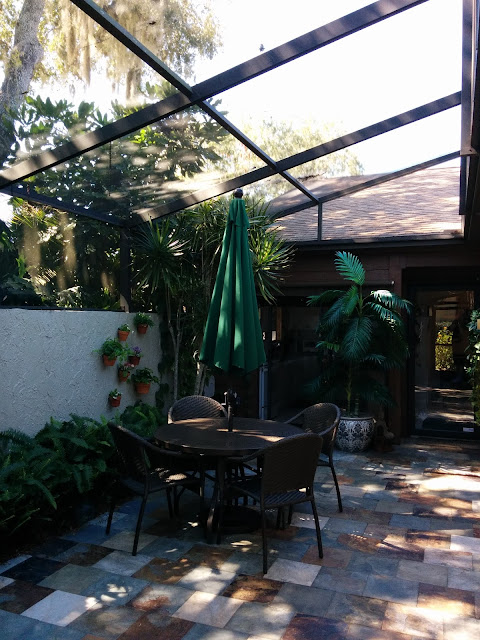 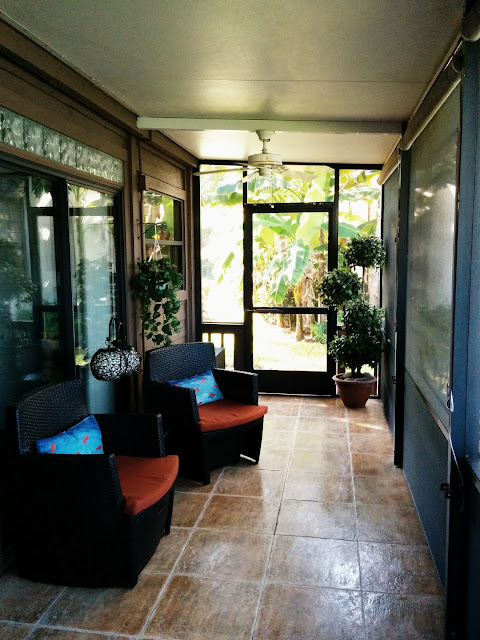 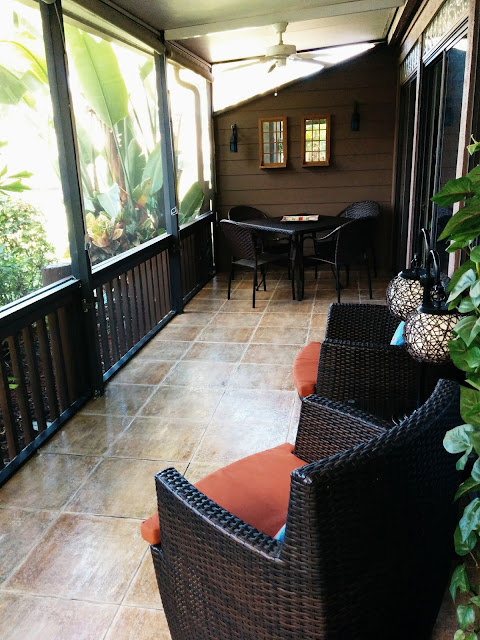 so on we go- preparing for the next place to live-  I used to move every year or two and then I bought a house- and ended up living there for seven years...which was a record for me.  We lived on Berwyn longer than anywhere else I have ever lived in my entire life (the longest when I lived with my parents was from Kindergarten to fifth grade - six years) so maybe this will be a record setter. I know I really would like that to be the case but we never know what fate has in store for us... so stay tuned to find out...LOL
Posted by TOR at 4:20 PM