So we loved loved loved Senza when it was open.  Noah & Cara Sandoval had created a lovely place with excellent food - so good I believe it had received one Michelin star while it was open.

here are my prior reviews:
http://blog.semifreelife.com/2014/08/sensational-senza.html

and this one only has the menu from our first outing there because I forgot my phone :-(
http://blog.semifreelife.com/2014/07/we-come-home-and-go-out.html

Unfortunately the jerks who owned the property and ran a gluten free (YUCK) bakery there in the mornings to mid-afternoon decided that if Noah and Cara could run a successful dinner place there they could too.... just bypassing the fact that Noah is a real chef and they were women baking cardboard cookies... But hey- we live in America - a free country where everyone can think they are qualified for anything, despite the reality of lack of talent looming large in front of them.

But enough of the rant.  Because the story has a happy ending. After a bit of time to regroup Noah & Cara are back with Oriole! And they brought the "band back together" as well as adding new talent!

I almost called this post "NINE Lives are barely enough...." because I kept telling the servers after each course I had died and gone to heaven LOL- so many times I needed cat lives to make it to the end of the evening.  If I said everything was perfect I would really not be lying in the least.  Sure there were things I liked better than others but each course was well thought out and balanced all elements in flavor - texture and presentation.  The service was impeccable (of course we were partial to our old buddy Tori who moved with Cara and Noah from Senza - with an interval at Intro).  The meal was so stupendous we have already made our plans for our three next visits.... with August being gone with the Scandinavia trip - we only have September and October before we head south to Michelin free land (which sadly has no ethnic food either- but does have terrific seafood!)

"Oriole is a restaurant hidden down an alley-like street in Chicago’s West Loop neighborhood, offering an extended tasting menu presented by Executive Chef & Owner Noah Sandoval and Pastry Chef & Partner Genie Kwon.  The Michelin-starred and Jean Banchet award-winning team hosts 28 in an intimate and elegant dining room shared with an open kitchen. Never bending to industry trends, the dishes and service at Oriole give guests a thought-provoking and interactive experience, where the diner is the true focus of the meal." (from their website)

So here is what happened on our magical evening at Oriole.  We arrived and found parking (for free!) steps away from the entrance and when we stopped to take a photo the door opened (like magic) and we were warmly greeted. The vestibule was small and rather dimly lit and opened onto a freight elevator (the kind that divides in half and part goes down to floor level and the other half goes up out of sight) and when it was opened up it was like a cool magical drawbridge to the inner sanctum of the dining room. From the elevator we proceeded to our table through a short hallway draped in dark material and emerged into a lovely dining area softly lit with japanese lanterns as well as some 'terrific for photos' lighting that was focused downward directly onto the table tops!

the exposed brick and  rough hewn posts of the warehouse space contrast nicely with the sparsely decorated space - food is the main event here.  And I can add it does NOT get any better than this - in any way... attentive and friendly service and amazing food which will be detailed later in a room lively but for the most part moderate when it comes to sound level.  We literally came home and made several more reservations.

here is where we started - 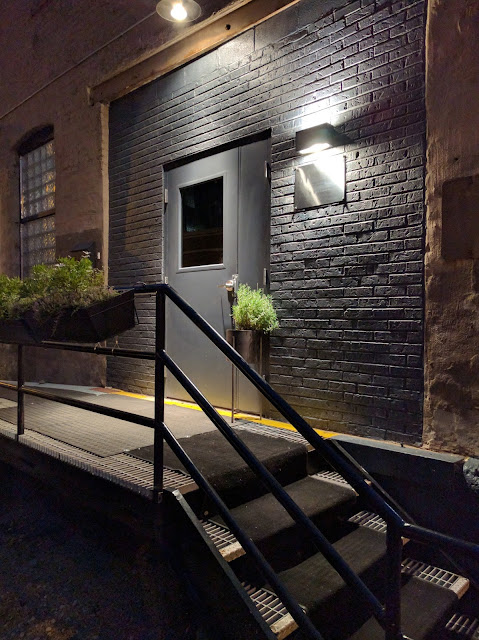 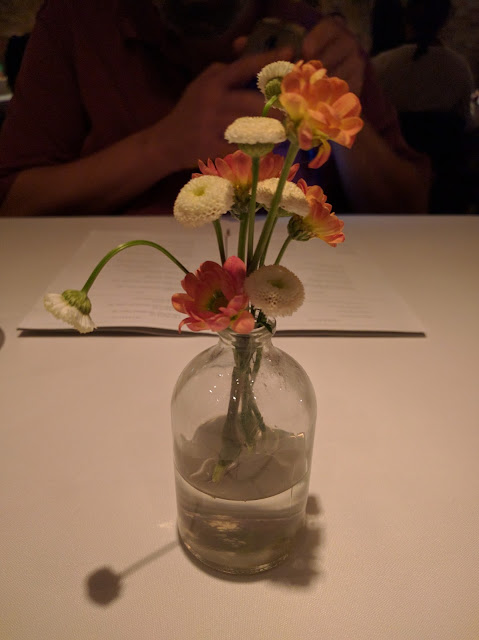 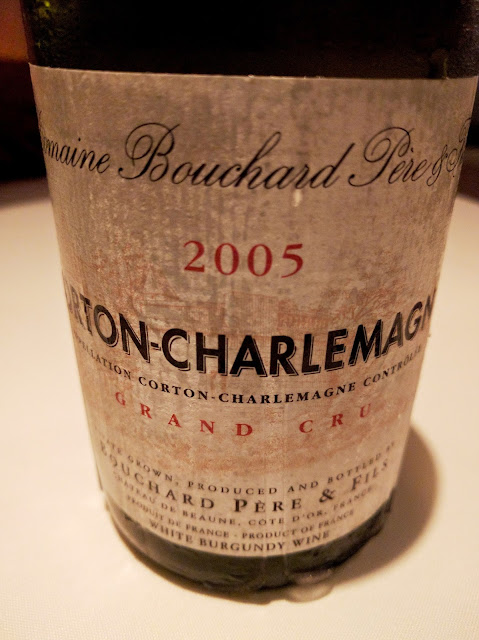 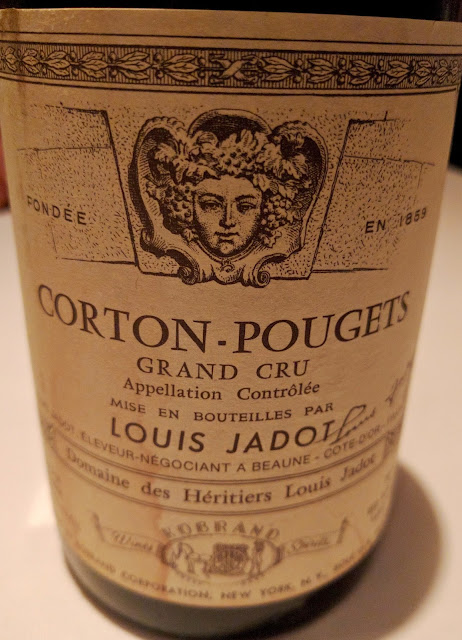 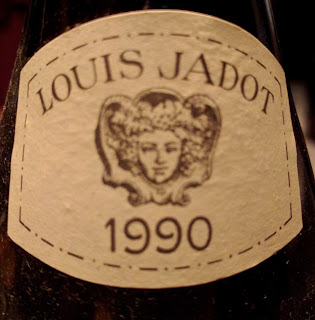 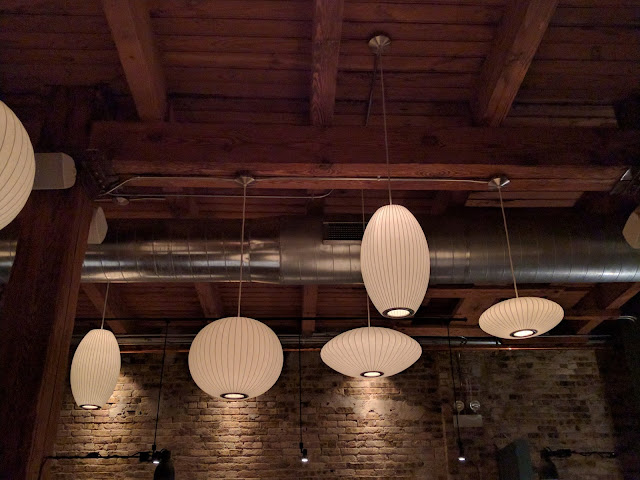 the menu course by course- 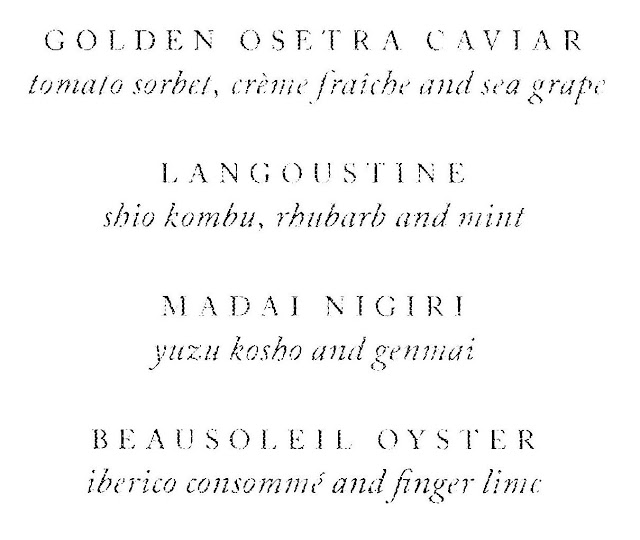 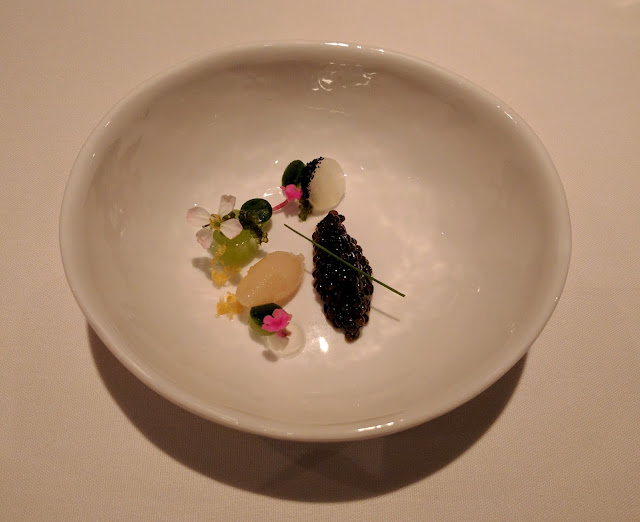 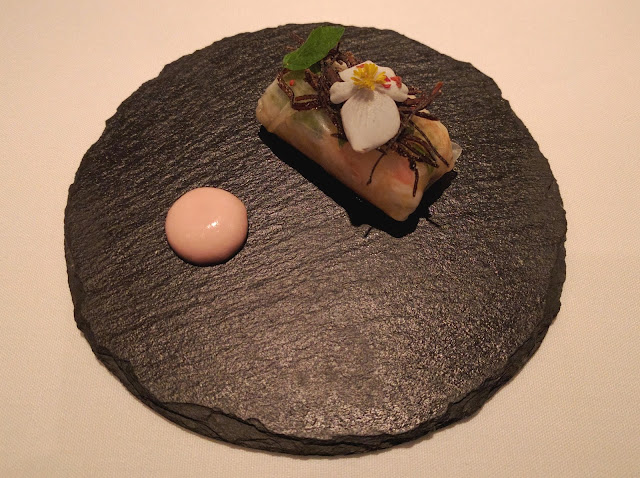 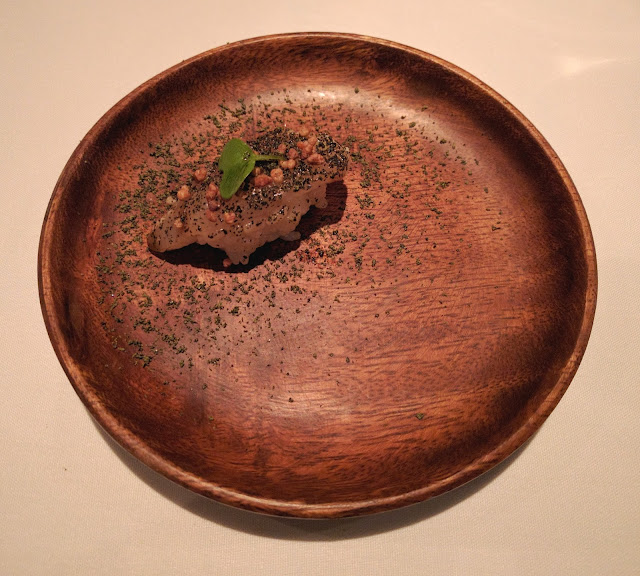 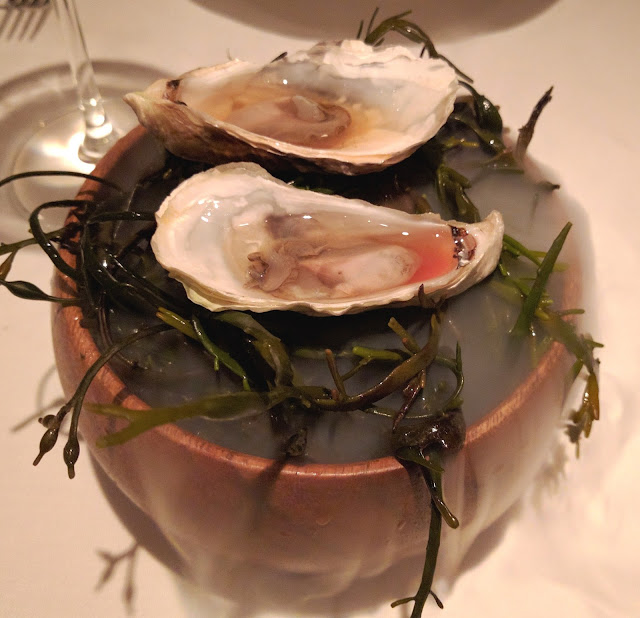 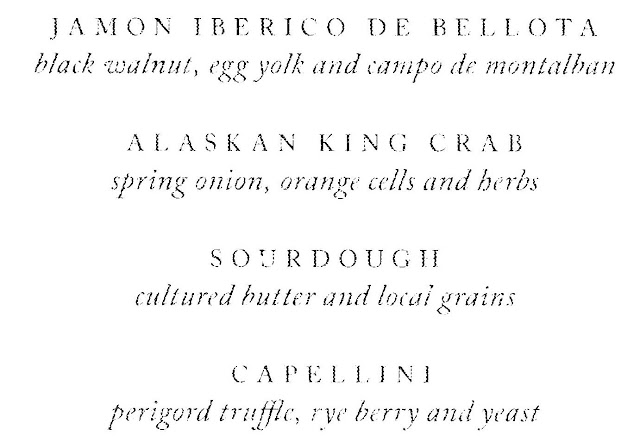 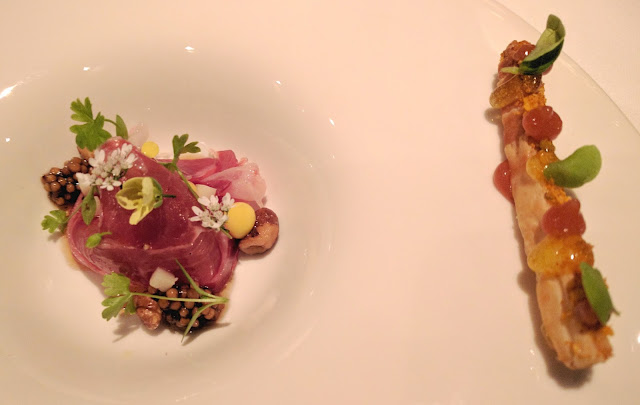 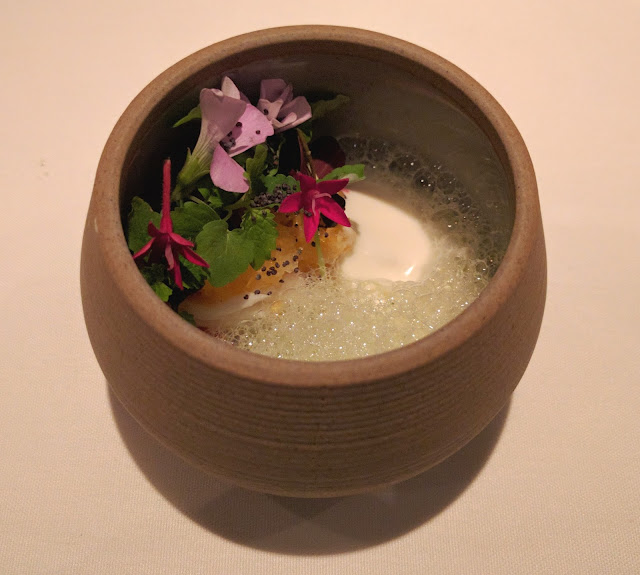 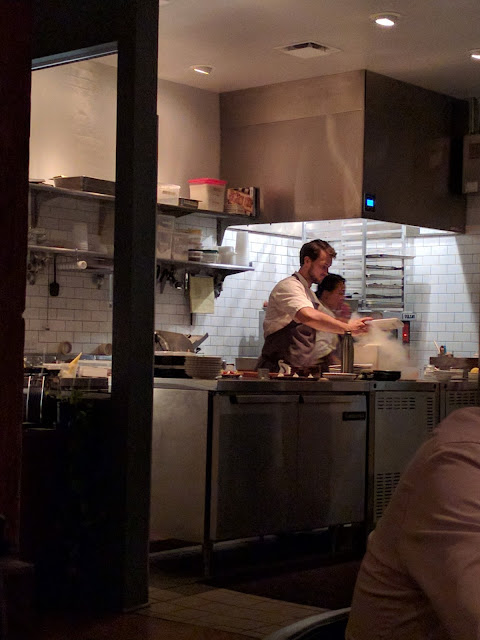 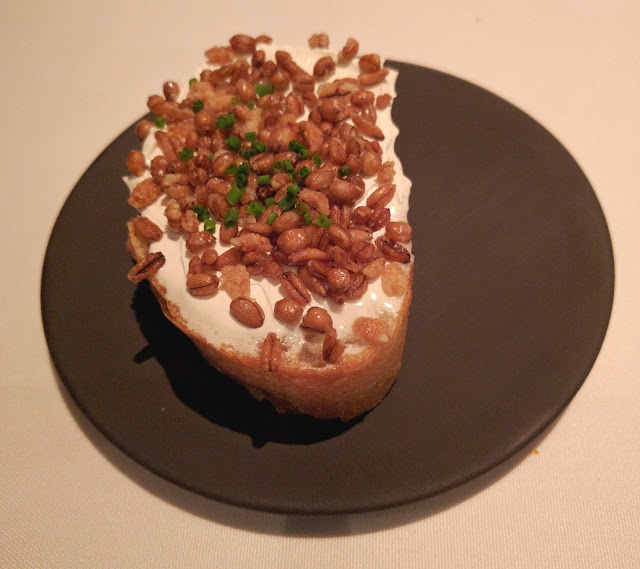 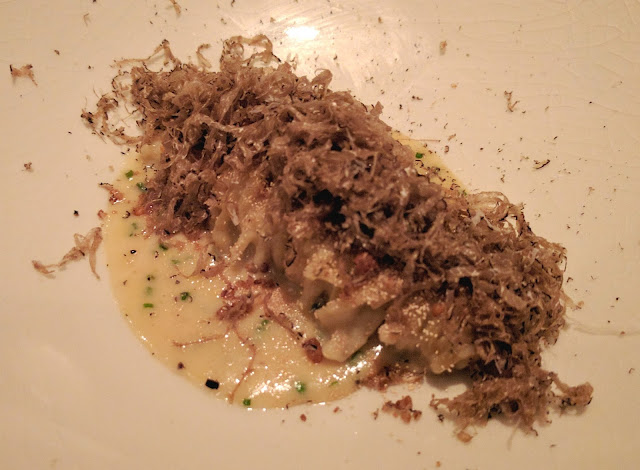 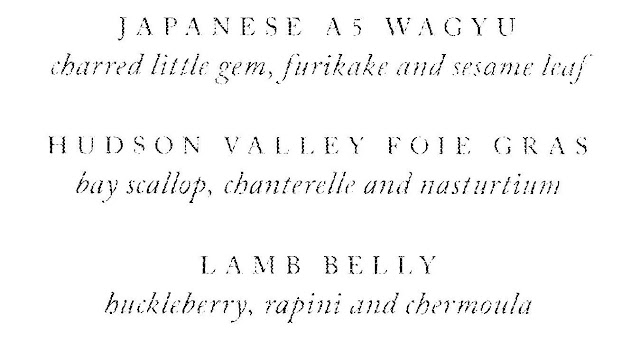 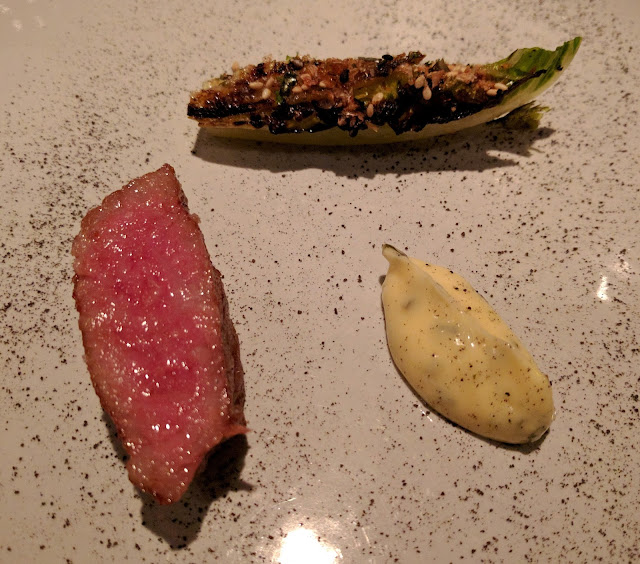 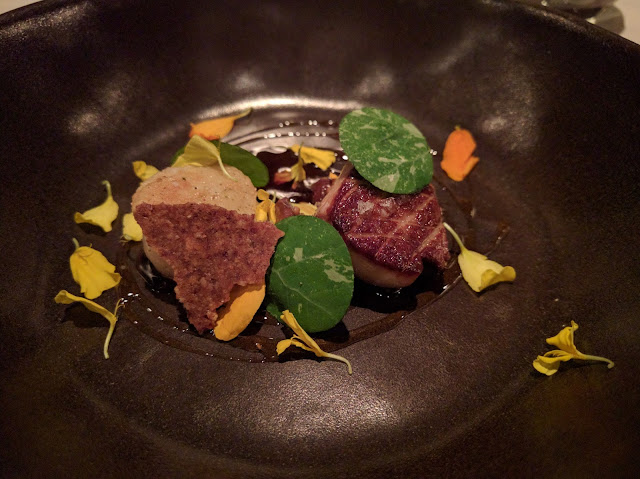 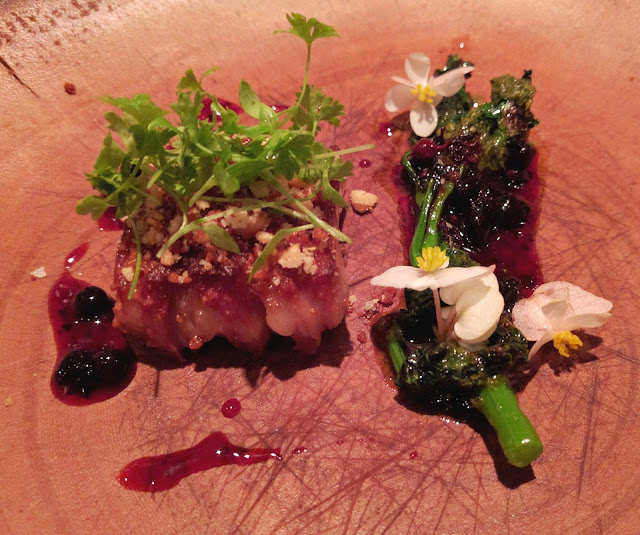 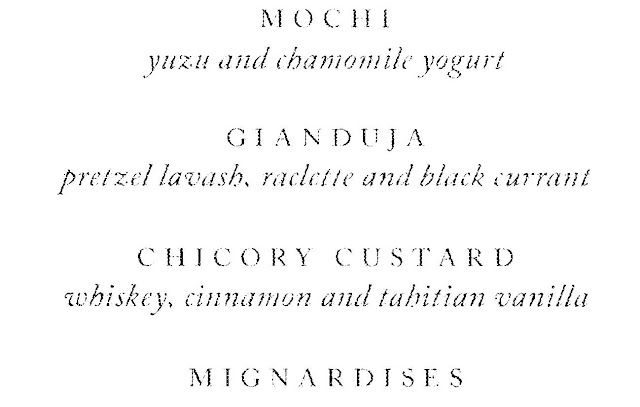 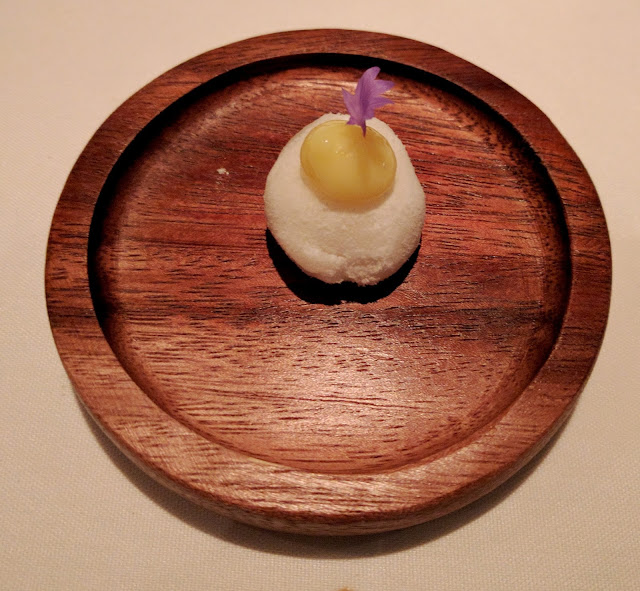 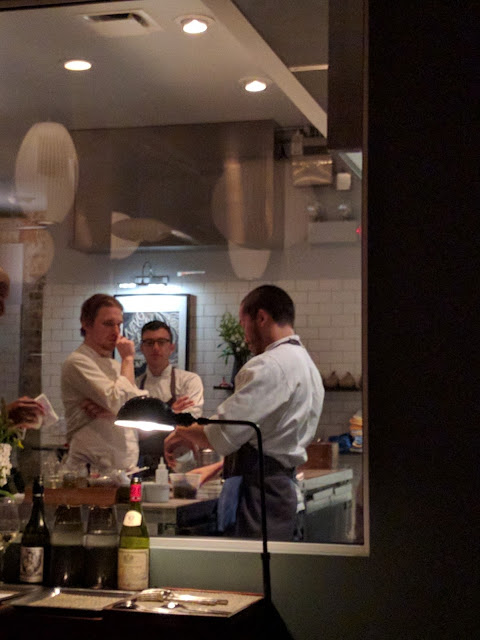 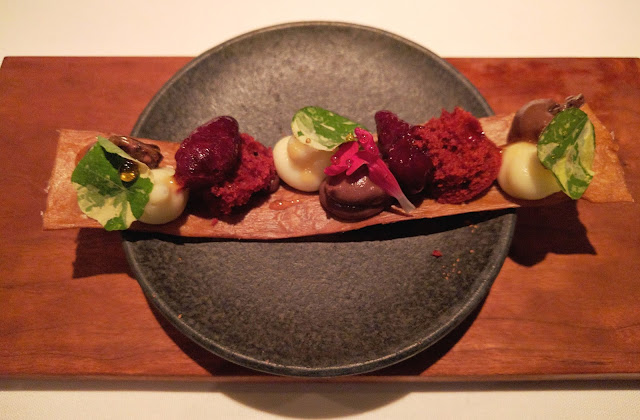 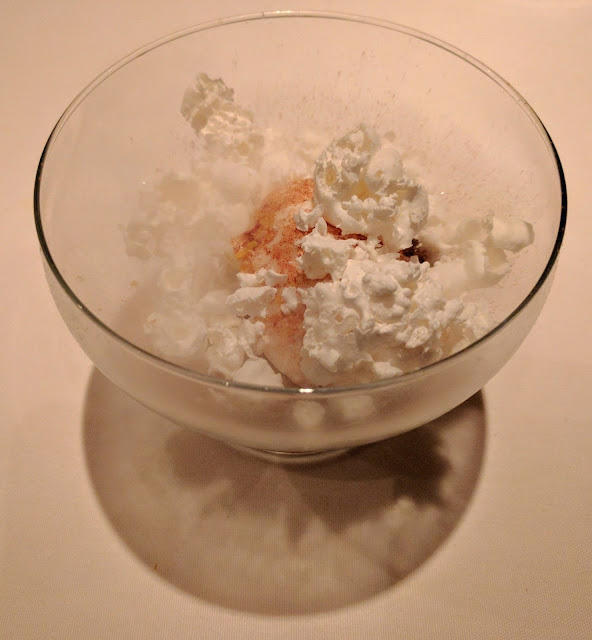 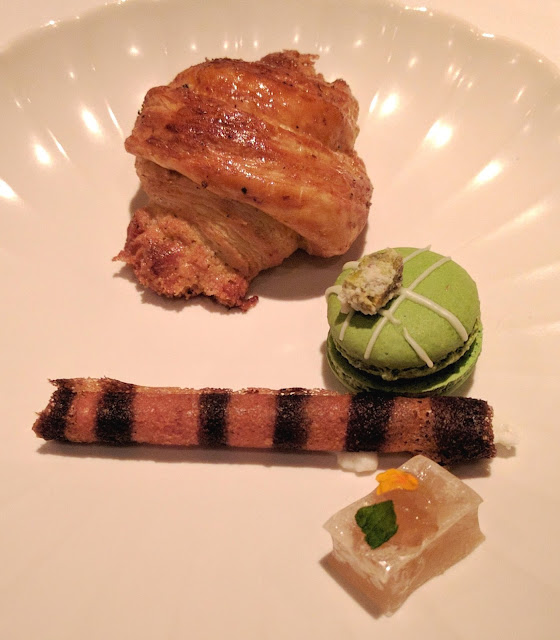 we got gifts to take home from Geni Kwon! She was delightful and I got to have my photo taken with the team and then with the ownership group... 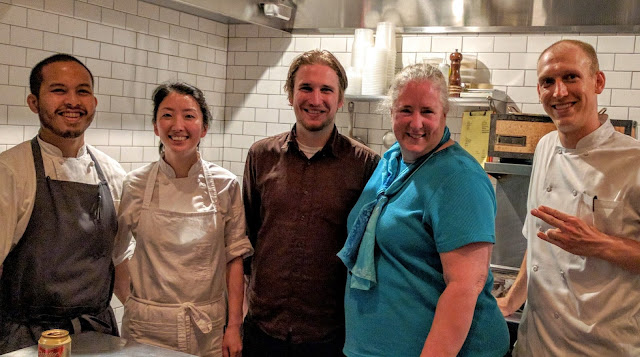 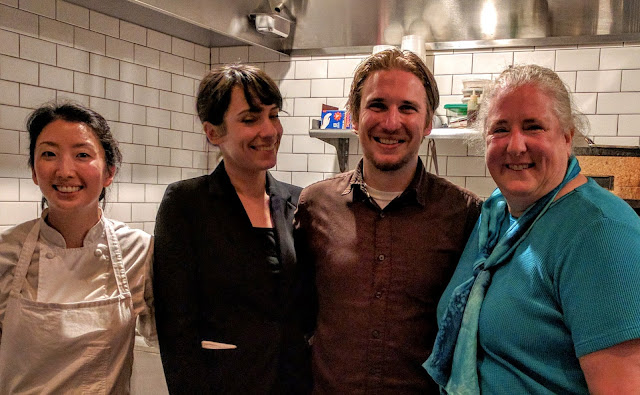 WOW WOW WOW-  I did die and go to heaven on any number of courses- this was as close to flawless as you can get... thank you to Noah and Cara and Genie and Aaron and the whole team - including Tori (a special shout out for the longest running relationship we have LOL she was our server the first visit to Senza memorialized in the post linked above) It was a wonderful evening! Really special - we were welcomed warmly and left feeling like we had spent the evening with friends!
Posted by TOR at 2:09 AM