Perhaps Achatz's most personal menu to date will debut in the fall, titled "October 28th, 1996." It will celebrate the 20 years since the chef's first day at Thomas Keller's celebrated Napa Valley restaurant The French Laundry, and it's been approved by Keller himself. On October 28, Achatz will recreate the meal he and his father shared at The French Laundry on the same date two decades earlier — "Get ready, TFL is coming to Next." This date is also just a year before then restaurant critic at the New York Times Ruth Reichl called The French Laundry "the most exciting place to eat in the United States."

the Tribune's Phil Vettel had this to say about the meal-

The French Laundry menu, the third and last iteration of Next restaurant's 2016 season, is part homage, part history lesson.
Twenty years ago, a very young Grant Achatz and his father drove from Michigan to Yountville, Calif., for the younger Achatz's first day working at The French Laundry. And on Achatz's first day of work, chef/owner Thomas Keller, in a remarkable gesture of generosity, treated father and son to dinner.
It was a moment, Achatz says, that rekindled his passion for cooking and put him on the path to becoming the chef he is today. And the menu that night, except for a few concessions to the season, is what Achatz and executive chef Jenner Tomaska are re-creating at Next — right down to menu typefaces and the signature clothespin logo.
In presenting the iconic California restaurant's cuisine as it existed in 1996, Next's French Laundry menu captures not simply a moment in time, however momentous it was for Achatz personally. By presenting the iconic restaurant's cuisine, circa 1996, Next also offers a snapshot of the state of American fine-dining as it existed 20 years ago.
So - we were not at French Laundry 20 years ago- but we were there 16 years ago and 15 years ago. At that time business called me to northern California and Phil was traveling with me quite frequently. I remember distinctly this being by far the most expensive meal I had ever eaten (and by the way tomorrow night's dinner will be as well) and also by far the best (we will see how well the menu withstands the test of time).

We had called and called and called (remember those days?) each morning exactly at the appointed time and exactly 60 days out from the date we wanted and on the final day we had available to go we were able to secure a reservation for lunch (same exact menu lunch and dinner) and we felt like we had won the lottery LOL... I may even still have the clothespin that was clipped to our laundry tag style bill (a keepsake they could well afford given the tab for the meal).

And it may not surpise you that I do not have photos of the meal (digital existed but not for me) and cell phones existed but not with the cameras they have today and in 2000 I would have looked completely out of place taking photos of my food LOL - unlike today LOL.

this is actually the tag/tab from our second meal there- in 2001- it would be almost exactly 5 years after Chef was eating there,,,, 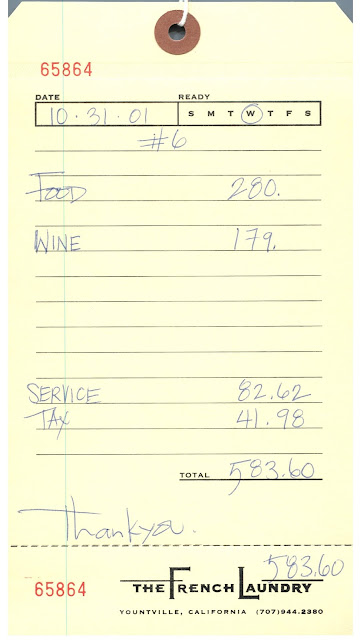 these are the two menus from our meals there back in the dark ages of dining- before food culture became part of American  culture and dining at Diners, Dives and Drive-Ins became as important as dining at the higest end French restaurants in New York, like Lutèce.... 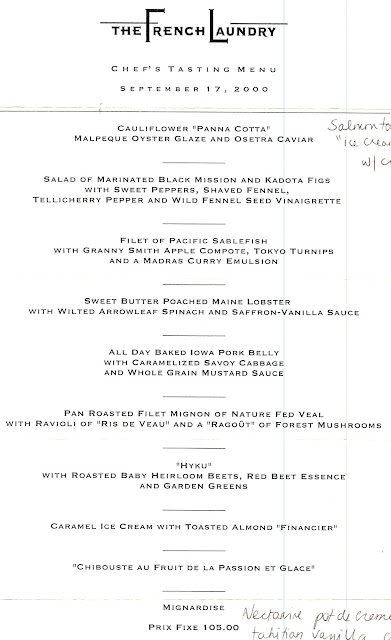 both menus started with the unlisted salmon tartare cornets which were a signature of Keller's (and I had noted those on my take home menu so not to forget them - although I doubt I would have since we still mention them and I am now also in possesion of the recipe for them thanks to the NYT cookbook where it is included... 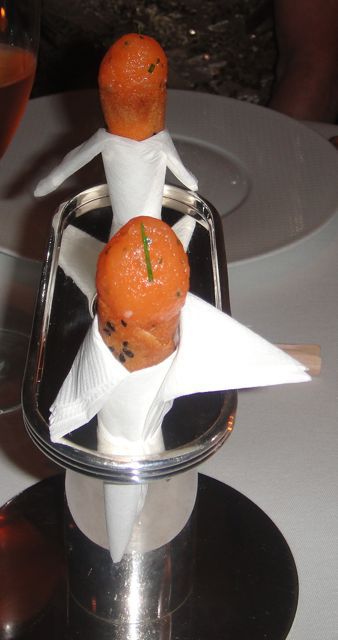 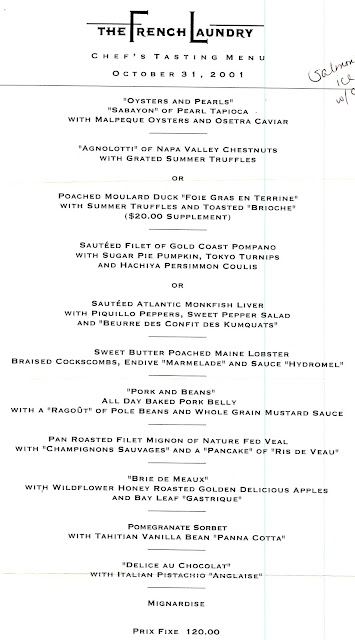 Note the price increase is a single year from 105 to 120... and the change in the clothes pins from printed logo on well formed pins - to peel and stick label for the logo on a less refined clothes pin- it is quite amazing how quickly the details become just a little less finely tuned- they probably said "who wil notice? We still have the clothes pins..."  Just sayin.....

"It was so cool for me to get back in the time machine," Achatz says. "Today, if you dine at Alinea, Grace or Oriole, there are touches of Japanese, Vietnamese — it's very global. Twenty years ago, that wasn't the case. Today, our food is seasoned differently; anything fermented and acidic just wasn't in the cards back then. To look at the way we did it 20 years ago, and look at how food has evolved, it's an interesting exercise."

and on the food itself from Phil Vettel-

The meal begins with a virtual parade of canapes, including the French Laundry's famous salmon cornet, a slightly sweet, crunchy cone filled with salmon tartare, and wrapped in a tiny, wing-collar napkin. It's a one-bite testimony to Keller's vision, precision and eye for design.
This is followed by soup, but the soup in front of you likely will not be the soup in front of your companion. Indeed, there might be as many as four soups on the table, including a peppery, vivid-green watercress soup with potato and horseradish; celery root soup poured over grapefruit, lime and mint; and a carrot soup that is like sipping liquid carrot. Some time later, a fish course is distributed in a like manner, marked by an upright cylinder of trout-roe-topped salmon in orange water; Atlantic cod in a "chowder" of potato, celery and bacon; and pompano, essentially given a luxurious amandine treatment.
The hits continue with "oysters and pearls," one of Keller's most famous dishes, in which a sabayon of pearl tapioca and oysters supports a generous quenelle of golden osetra caviar. Truffled custard and a near-translucent chive-potato chip are coddled inside an eggshell. A tomato salad tastes like a vertical gazpacho, layering brioche crouton, marinated tomatoes, yellow-tomato sorbet and garlic tuile.
More largesse arrives with not one, but two lobster dishes: Butter-poached lobster with crispy pommes maxim and red-beet essence, along with five-spice roasted lobster with port-poached figs and foie gras, both right out of "The French Laundry Cookbook." Ditto for the meat courses: duck-breast "roulade" (actually wrapped in chard) with creamed corn and French prunes; Keller's rabbit saddle with bacon and caramelized fennel; and a superb short-rib pot au feu, surrounded by tiny root vegetables and topped by an unctuous nugget of battered bone marrow.
Desserts include Keller's famous "coffee and donuts," which presents foam-topped cappuccino semifreddo in a coffee cup, alongside cinnamon-dusted doughnuts, and a refreshing verjus sorbet speared with a dried-peach crisp. Followed, of course, by more mignardises than any normal person deserves.
Conspicuous by its absence is any sort of culinary sleight-of-hand, for which Next is famous. This time around, there's no centerpiece that turns out to be the dinner's third course, no liquid element that arrives as a solid and vice versa. Courses arrive without misdirection or instructions.
"All the finesse is in the prep and the actual cooking," Tomaska said. "(This menu) is really going back to the fundamentals. You can't hide behind anything."
pvettel@chicagotribune.com
So now we are all prepared with the history of the meal we are about to attend- I think it would not be unfair to call it an event... of late we have had some disappointments in the menus presented by Next and it will be interesting to see if this one recaptures the excitement everyone felt when we all eaferly awaited Paris 1906... their first meal (and prehaps best to date.) So stay tuned and we will report back! If nothing the meal has givenus a nice walk down memory lane....
Posted by TOR at 12:12 PM