so I have been "home" a week and Phil has been home three days- and yes we are already in the swim of our time here... discussing classes to take or not take; going to theater, symphony and opera; where to dine first second and third..LOL; and of course no "winter" would be complete without a couple of wine dinners at Michael's Wine Cellar.

So despite it being Phil's night number two we headed downtown to Michael's for a Robert Kacher wine dinner. 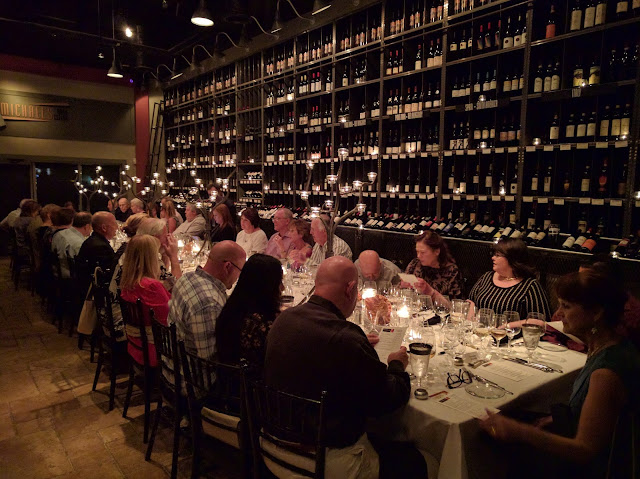 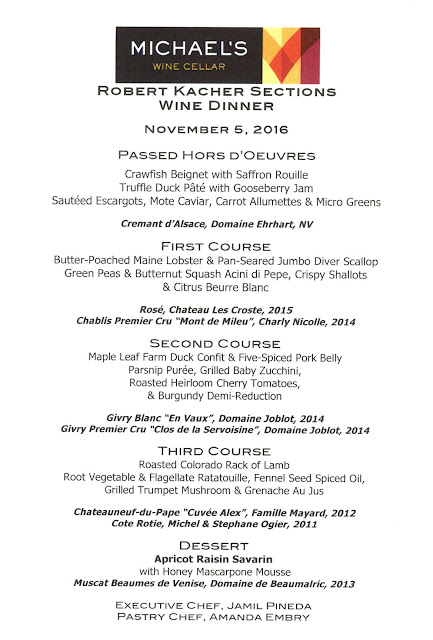 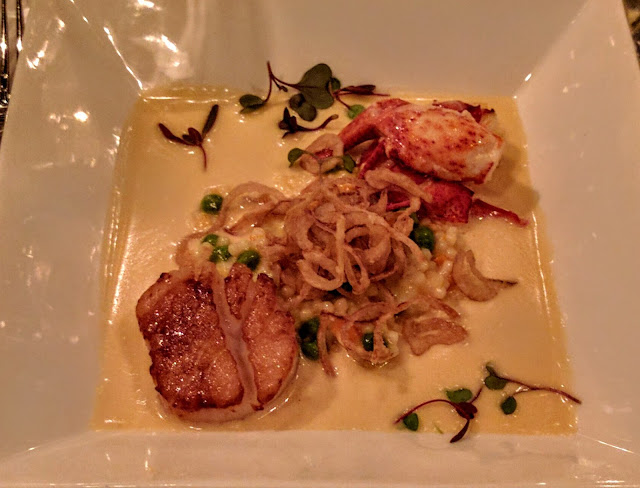 both the course above and below were outstanding- I gave a slight edge to the scallop and lobster course but Phil favored the duck and pork belly combo which did totally rock... so I couldn't argue the point LOL 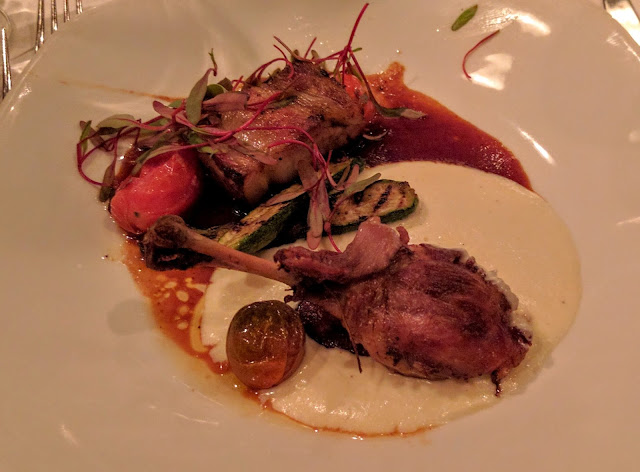 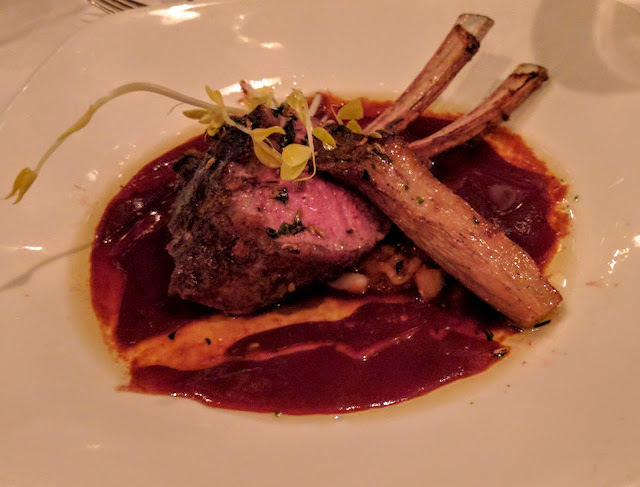 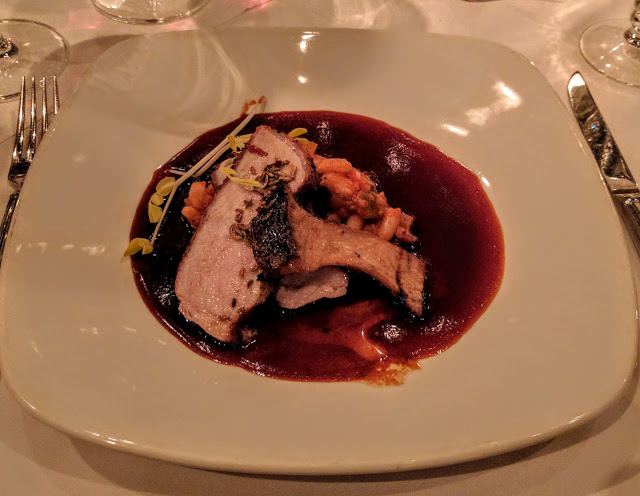 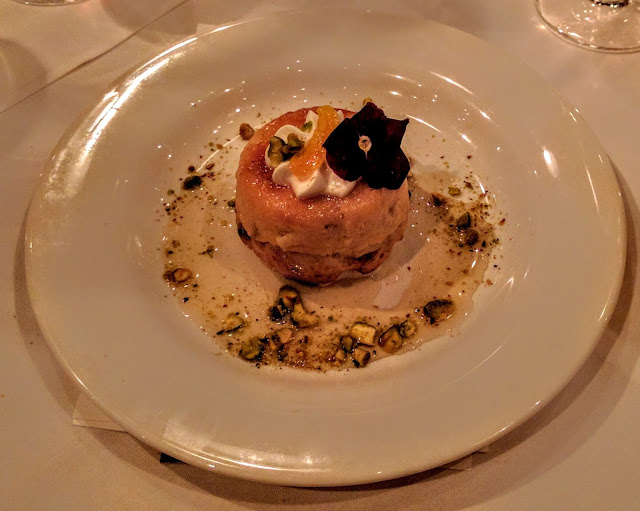 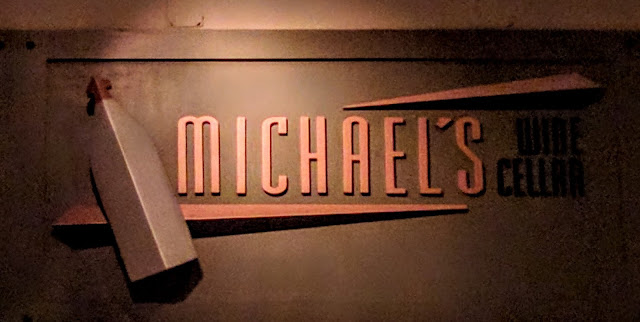 Chef Jamil always works at top level when preparing these menus to pair with the wines- he gets a chance to be creative in a way he may not be able to at the restaurant Michael's on East where the menu has to be served day in and day out and appeal to a much broader group of patrons.

So a fine evening for our first Saturday in warmer climes.... and we are celebrating the win of the Cubs in the World Series and the award of Two Michelin Stars to our friends Noah, Cara, Genie, Aaron and Tory at Oriole! - in their first year of operation! This was a real big week for a lot of reasons.... but while we celebrate for a number of them the whole City of Chicago gets to celebrate the ending of the 108 year drought in baseball with the World Series win by the Cubs!  I don't think I have ever seen such an outpouring of pure joy as when they won the nail biter of game seven in extra innings... some of my FB friends' posts really hit the nail on the head when the game was tied at 6-6 in the ninth... one posted "HOLY MOTHER OF GOD, NOW WHAT?" LOL- so go Cubs and Yea! Oriole (posts of our four meals there this past summer are given below to cut and paste into your browser- sorry for some reason they don't hyperlink)

So I will end this one with the photo I took off FB - Wow ! FIVE million people came out for the parade/rally on Friday to celebrate (which is more than half the population of the 9 million metro area) Go CUBS! 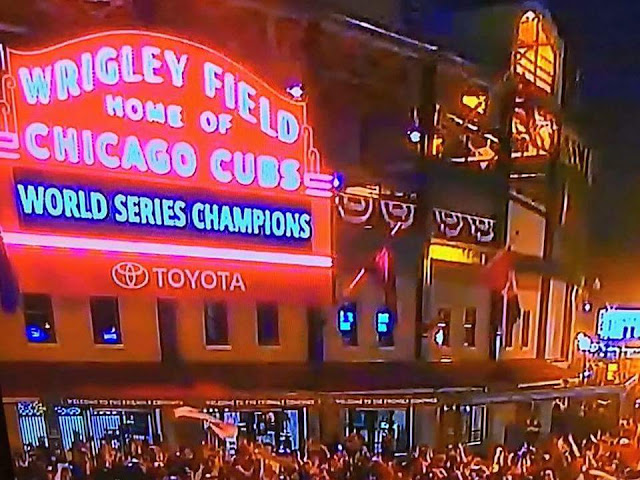