the last time I entitled a post "minds blown" it was about food... this time it is much more intellectual and less a sensory experience.  This afternoon we attended a lecture and discussion on artificial intelligence  - and WOW! is all we can say about the livey discussion and the two terrific lecturers - 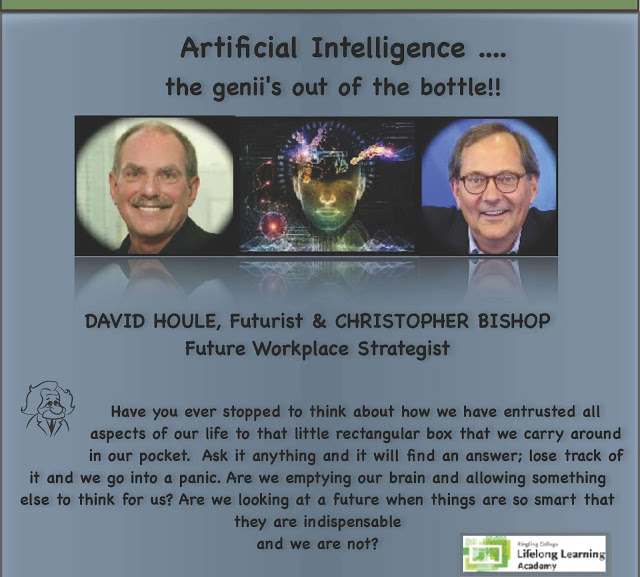 the first words spoken to us - after good afternoon- were that "nearly all the time our thinking about the future is shaped by our current reality and that in order to really expand into the possibilities one would need to let go of this restricted thinking" - just as hunter gatherers couldn't imagine an agraian society, and the agraian society couldn't imagine the industrial revolution, we have difficulty imagining the life of the future.

then they did a little bit of background on the development of machine thinking - it was built by humans and is like clothes (artificial skin) or glasses (artificial sight) or HVAC (artificial heat)... you get the drift - because it is "man-made" human made

but here are some slides and my comments along the way- 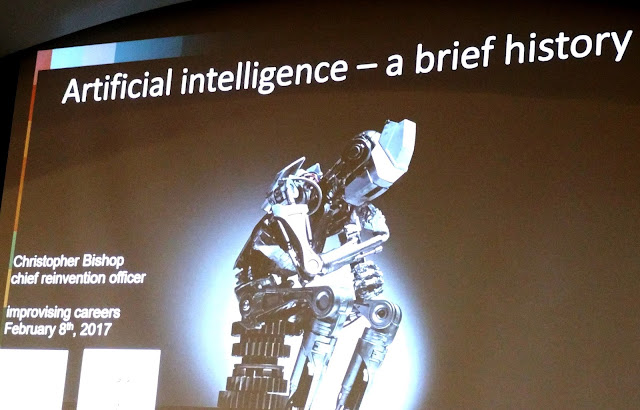 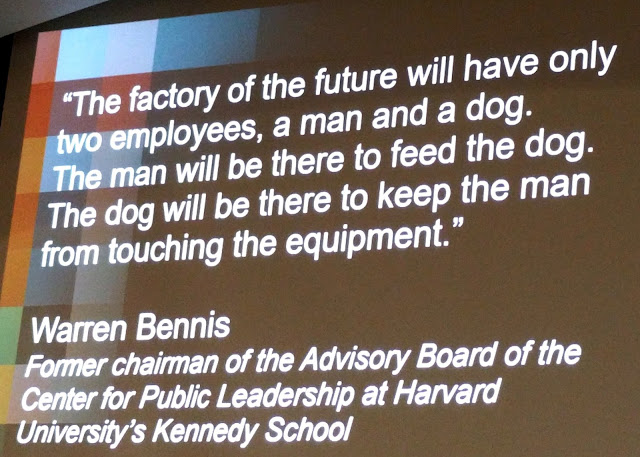 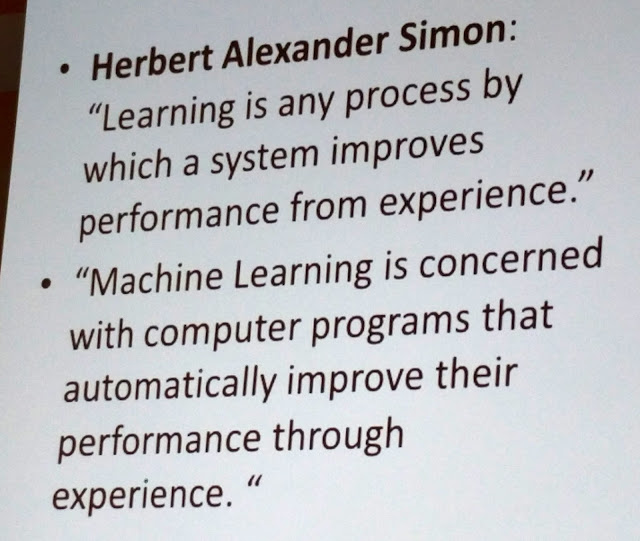 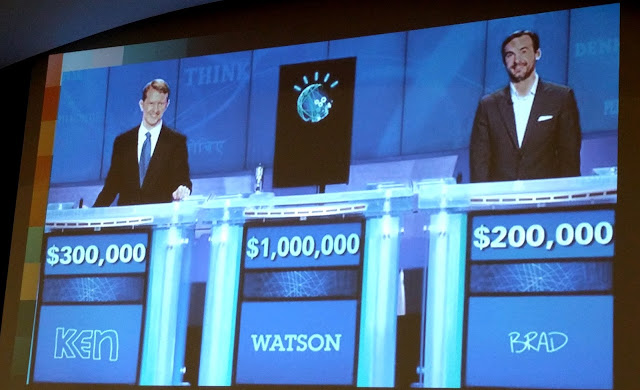 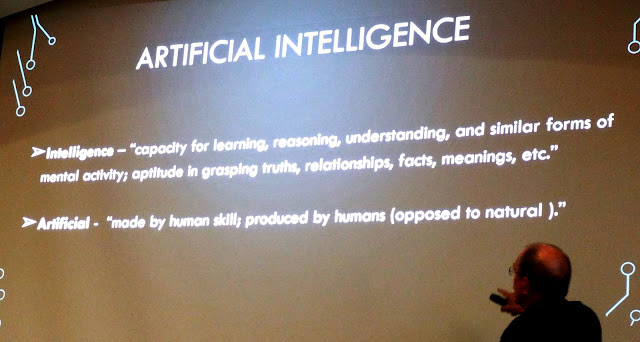 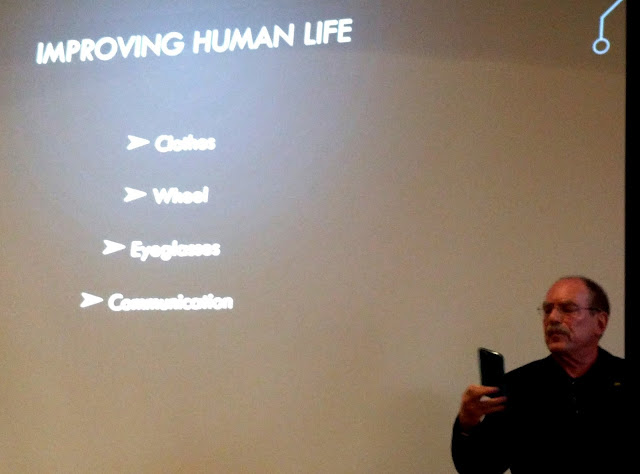 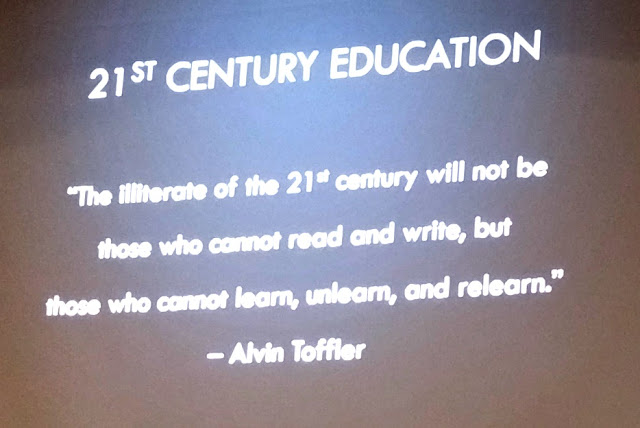 
The thing they fear the most - that keeps them up at night- that could create no future at all- CLIMATE CHANGE... 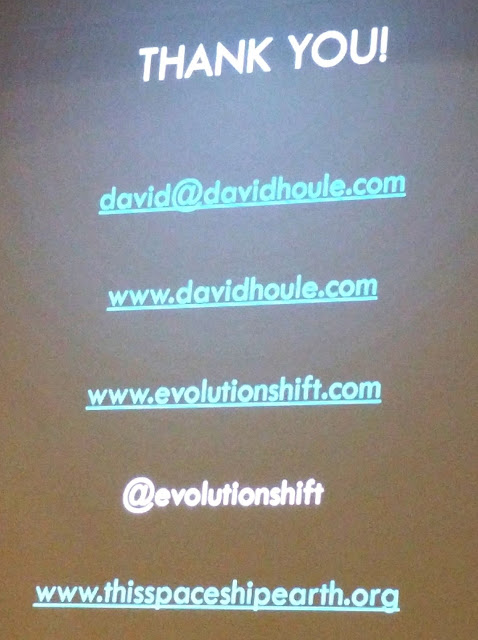 Chris Bishop (below)-  Right after graduating from Bennington College with a degree in German literature, I toured and recorded with a country-rock band called McKendree Spring. Then, moving to New York, I became a sought-after session musician, working with many famous artists including Robert Palmer, Darius Brubeck, Chuck Berry and Bo Diddley. Realizing that by working in advertising, musicians could sleep in their own beds at night and get off the road, I broke into the jingle business, first as a bass player and then as a composer and producer.

In 1995, after becoming captivated by the Internet, I taught myself enough about this new technology to get hired as a Web producer at several seminal interactive agencies in New York-including CKS Partners and Eagle River Interactive. Then, in 1998, after being invited to what I fully expected would be an awkward if not embarrassing interview, IBM asked me to join their Corporate Internet Programs team. I left IBM in June of 2013 after 15 years. While there, I worked in a variety of roles including new media production, as a business strategy consultant, and in various communications and social media-related jobs. 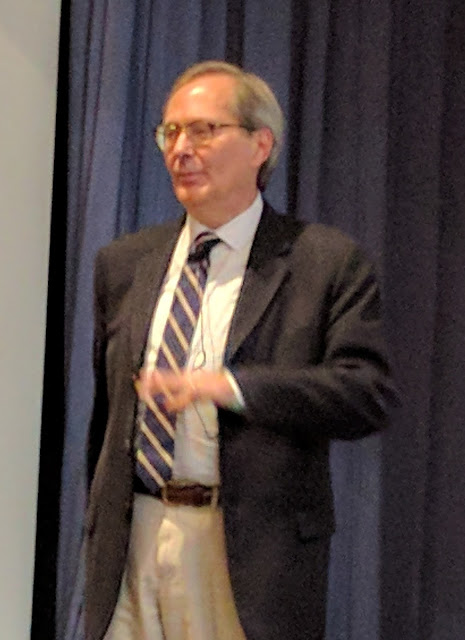 David Houle (born 1948) is a futurist, keynote speaker, and author of The Shift Age. He coined the phrase "The Shift Age" and identified this new age as the successor to the Information Age in 2007.  David Houle is a renowned futurist, thinker, and speaker. David has won numerous awards including Speaker of the Year award from Vistage International, the leading organization of CEOs in the world. He is often called the “CEOs’ futurist” having spoken to or advised 2,500+ CEOs and business owners in the past seven years.

he has a blog and a recent post addressed his thoughts on the current view of what the future holds - given the new president- if you have interest- you can find it here: 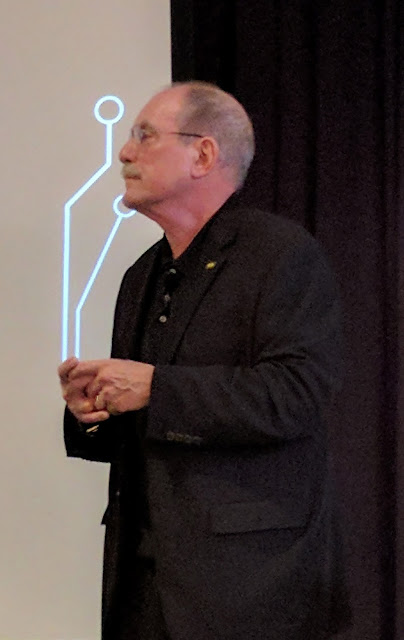 This was an amazingly far ranging discussion - and it was a discussion because they presented for about 30 minutes and the interactive session was more than an hour long- and probably could have gone on for twice as long given how much people had to ask and share about!  Terrific use of two hours of our time! worth the drive to Temple Beth Sholom for the presentation.

and as aside because Watson was a part of this discussion I thought about how terrific The Watson Intelligence was at Theater Wit... and it was reviewed here in case you might want to revisit that one-

so on we go- friends are coming tonight and we are off this weekend to visit Angela & Lee... so stay tuned
Posted by TOR at 11:16 AM