I know you think because I haven't posted in a while that we must be starving- LOL - OK so maybe that isn't what you were thinking LOL....

And you would be right we are not... even though it's August we are still catching up on favorites in the hood...

and since I posted last we met up with Lynn, Maryanne and Judy for a birthday dinner at Cafe Marbella (prior posts with lots of photo found here- http://blog.semifreelife.com/2017/06/food-wine-part-x.html ) and then we met up with friends two days later to introduce them to Bien Me Sabe (prior post with lots of photos found here - http://blog.semifreelife.com/2017/05/a-big-win.html ) so we did not go hungry last week and this week we haven't either- LOL

the high point of dining this week would definitely be Lao Sze Chuan - only kidding- that is our local Szechuan place and while we did go there this week and we did have some good food it was not the highlight of the week's meals.

the highlight would definitely be the popup collaboration of two excellent chefs - one you will recognize from no less than ten posts here - Jake Bickelhaupt (late of 42 grams) whom you last saw here in this post from May 5th- http://blog.semifreelife.com/2017/05/still-going-strong.html and Claudia star chef Trevor Teich... they were doing a collaborative dinner at Claudia for just a few meals this weekend.  So off we went with Chaine friends John & Stephanie to a fabulous evening of conversation over good food and good wine with good folks! 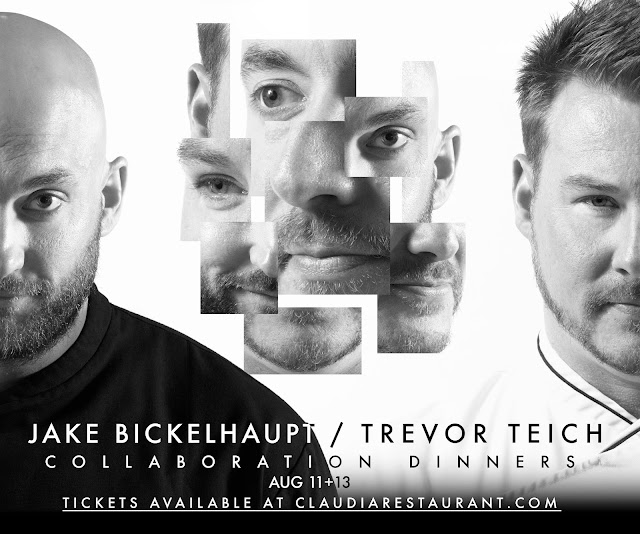 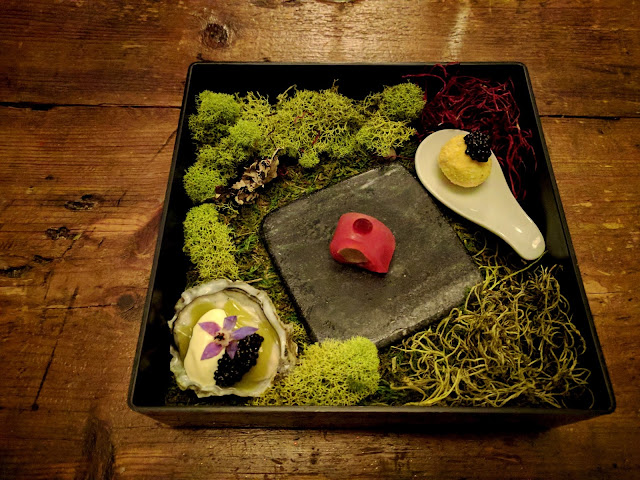 above our Bento box of starters with oyster with caviar and the tuna "roll" has foie gras inside!
below Jake's take on foie gras with amazing crunch of the rice noodles over a smooth textured foie 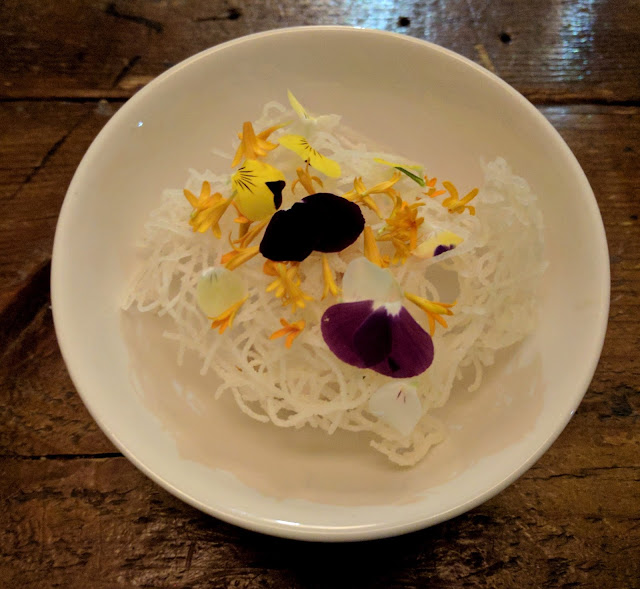 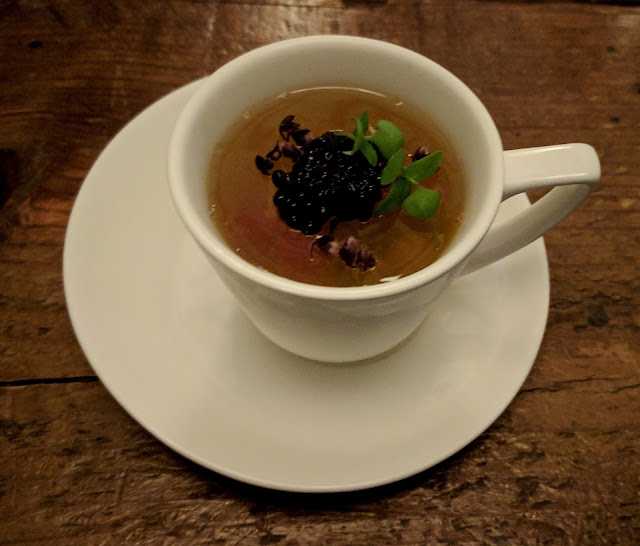 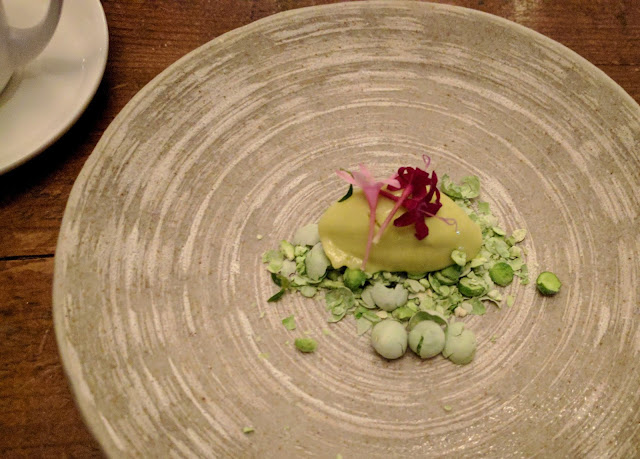 the sea urchin course which was custard-y and had other wonderful note of the sea - including dulse and the briny foam... 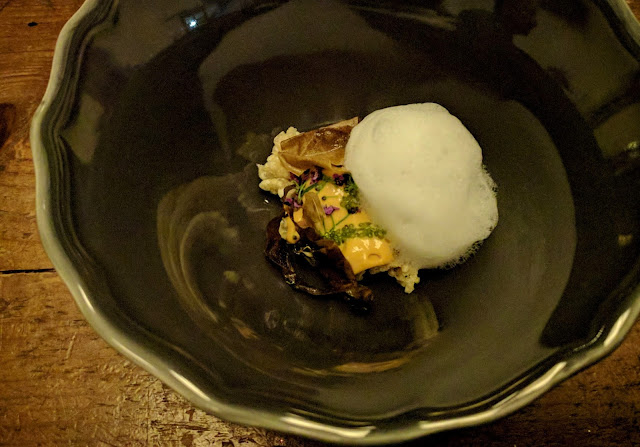 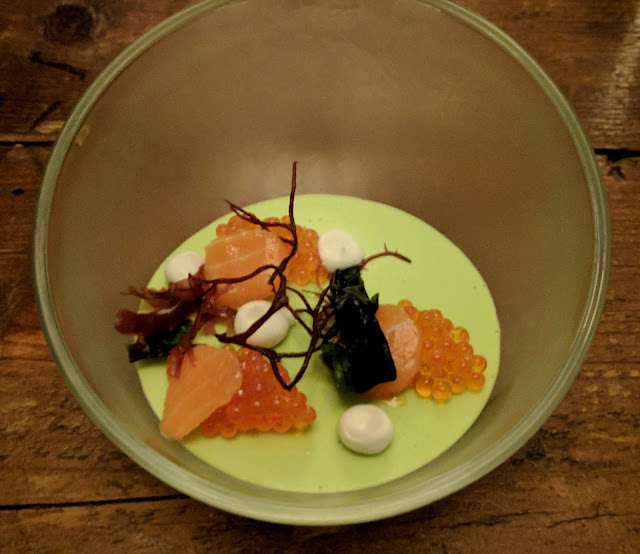 mine shown below without the coconut custard base and other coconut elements - and while I cannot speak for the others' dish mine was fabulous and decadent with the two kinds of caviar and the salmon! Thanks Trevor! 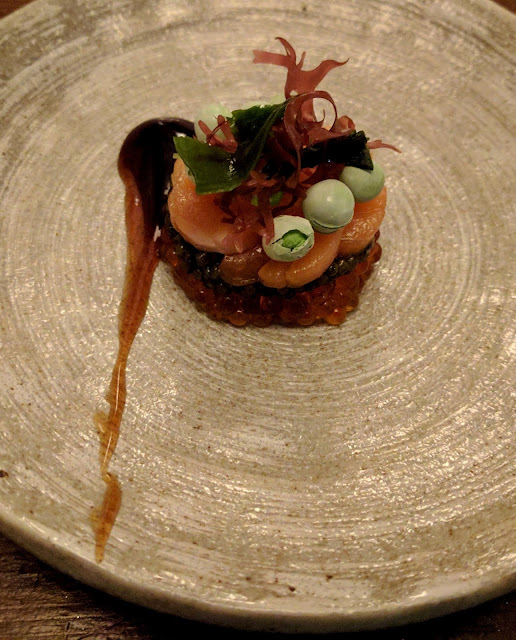 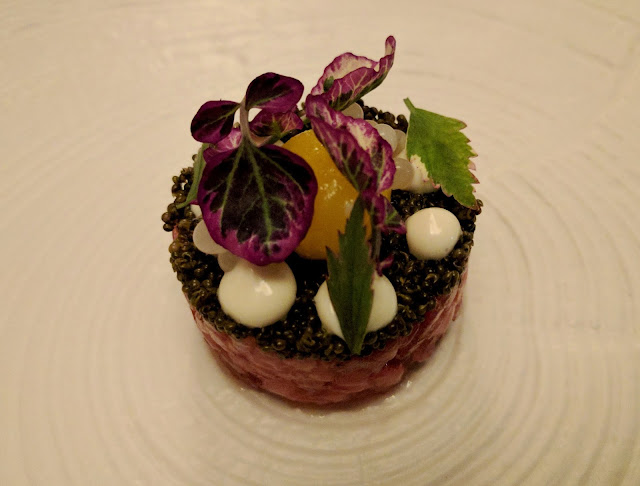 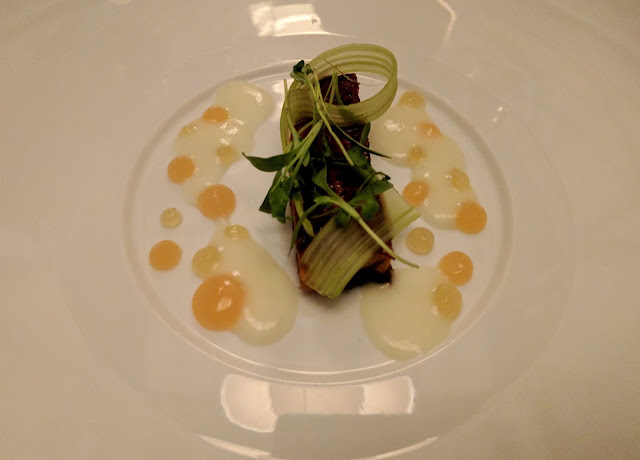 a dish with black truffle and other veggie things with duck feet jus (we laughed about it being kind of sort of vegan until you got to the duck feet... 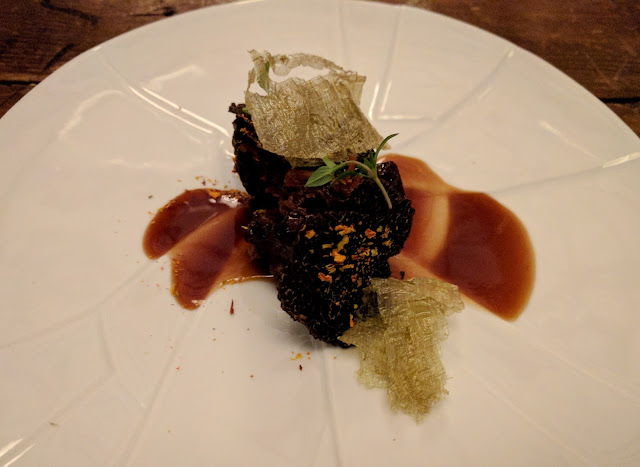 the first riff on Wagyu - as a PHO type dish with a terrific broth that slightly cooked the raw A5... 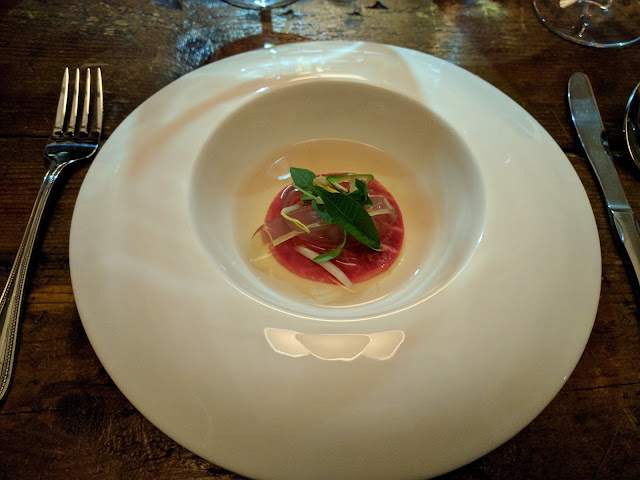 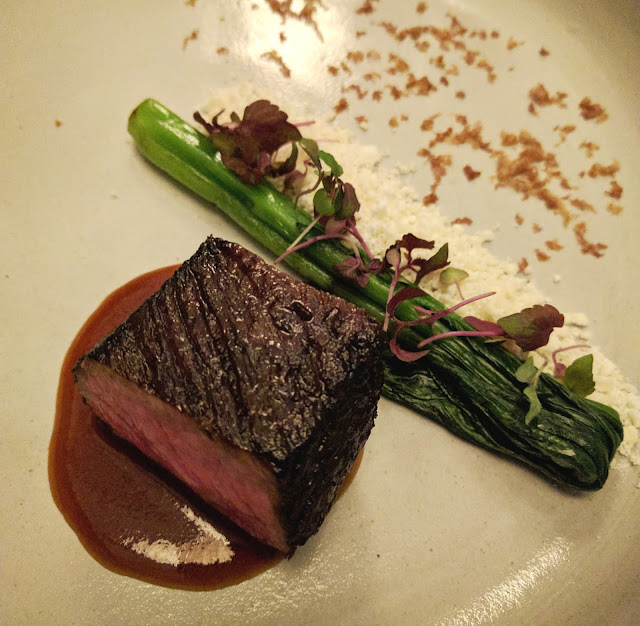 a refreshing veggie side LOL - served on its own - a carrot popsicle covered with peas - veggies were never as appealing as this course - dessert like in flavor and textures - it was a winner! 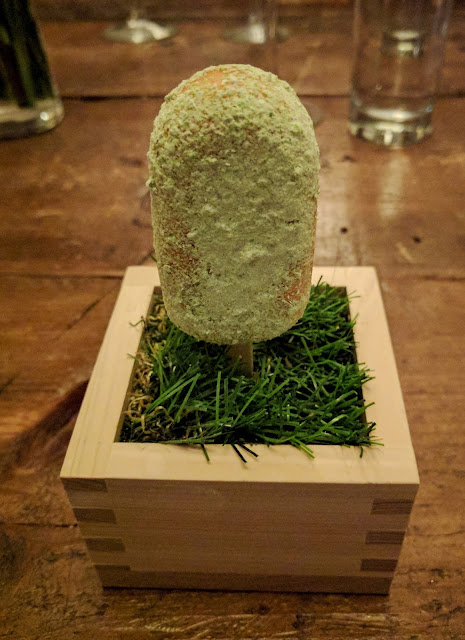 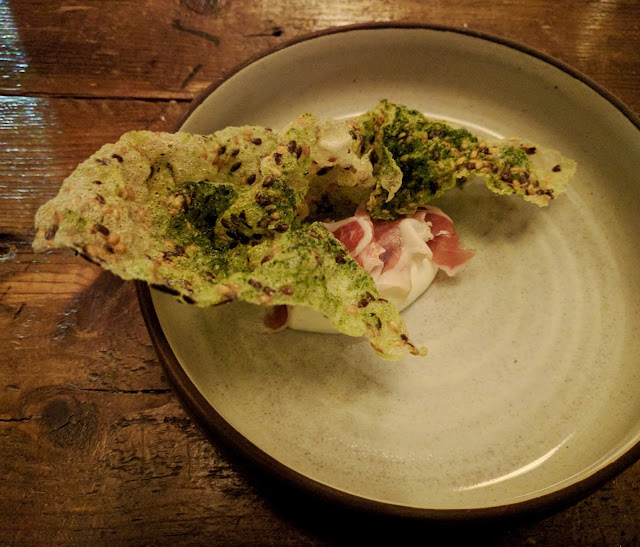 a palate cleanser of rose based flavors in varying presentations - yum yum! 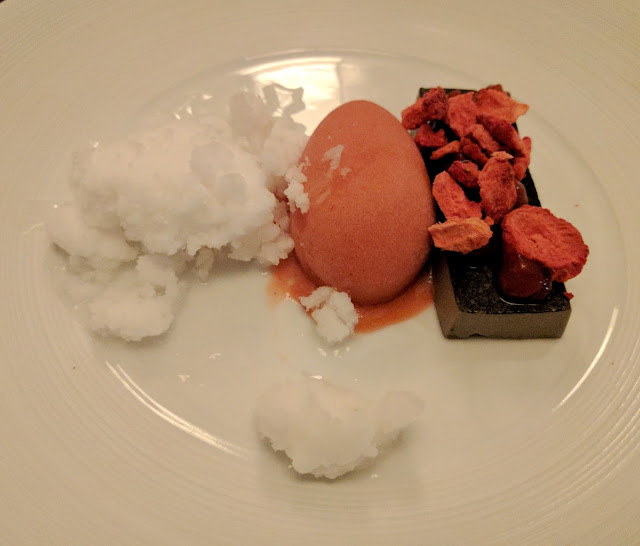 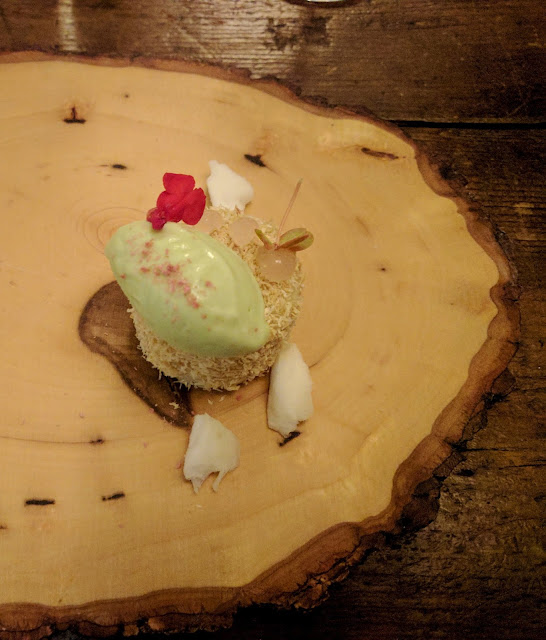 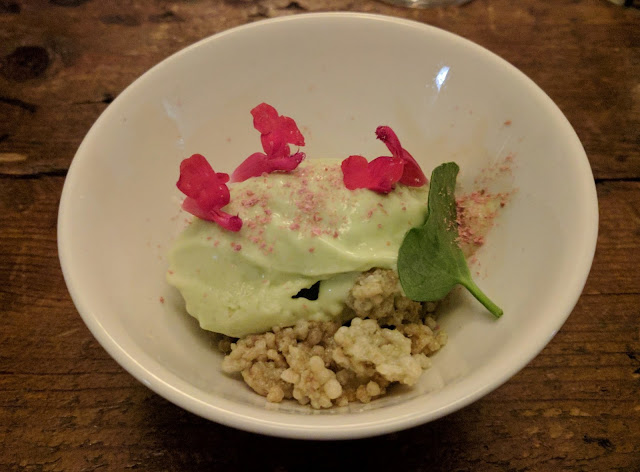 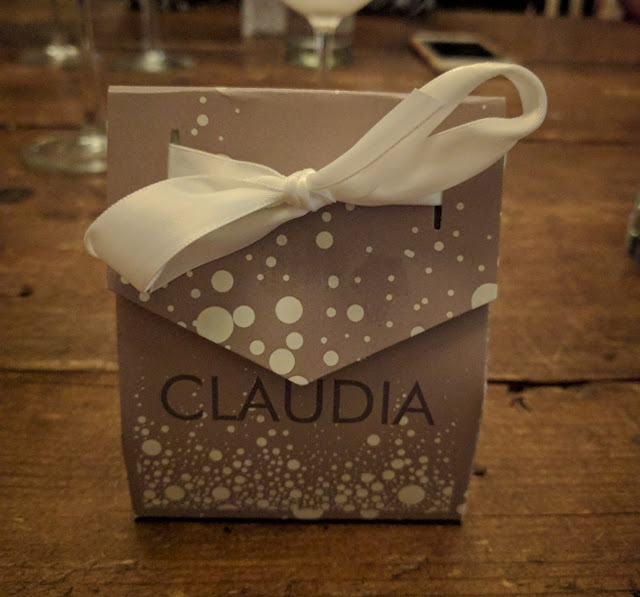 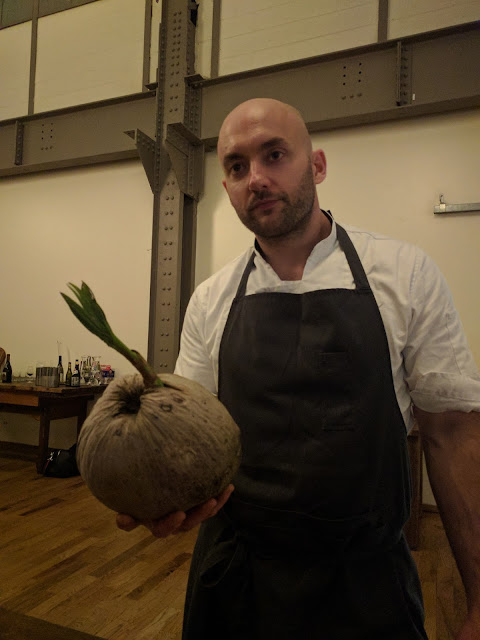 a terrific meal with terrific company- the hour was getting past 1 AM and so we headed home with our goodie bags knowing there would be treats to follow!

As I said - we aren't starving and we have been meeting up with friends to socialize and share a meal while catching up on everyone's lives.... and in case you haven't heard (been a cave somewhere) there is an eclipse coming up- something I have waited three years for!

so Angela and Lee came to visit and Larry came up from Miami... the number one choice of attractions on Angela's list was to visit Snooty... he lives at the Parker Aquarium in the South Florida Museum. We did stop to take in the Star Talk at the all new planetarium (which was great) now we know not to miss the solar eclipse August 21, 2017 in Murfreesboro TN! but on to Snooty- the main event!

as it turns out you don't have to go to Murfreesboro (where I had a hotel reservation for over 18 months) the full eclipse for the full 2 minutes and 45 seconds can be viewed in a path between Columbia MO and Murfreesboro TN and some amount of time less than the 2 minutes 45 seconds along a swath of the country from the west to east coast.  I marked the area of longest eclipse by the red arrows- 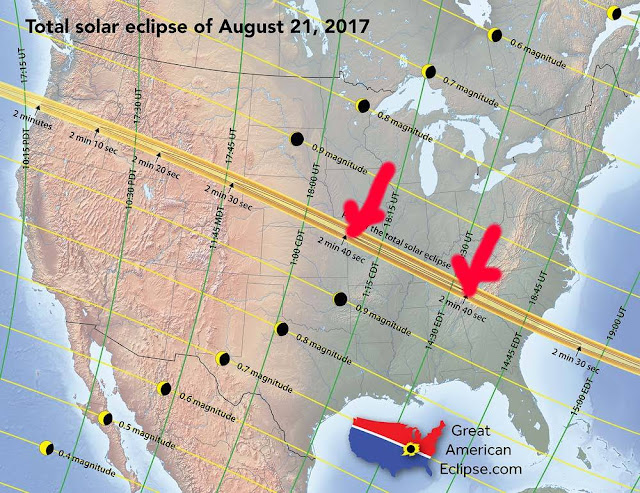 but as those who know us know - go big or go home - so we are heading to the full two minutes and forty five seconds of total eclipse near Columbia MO in a week - more to follow on that topic... 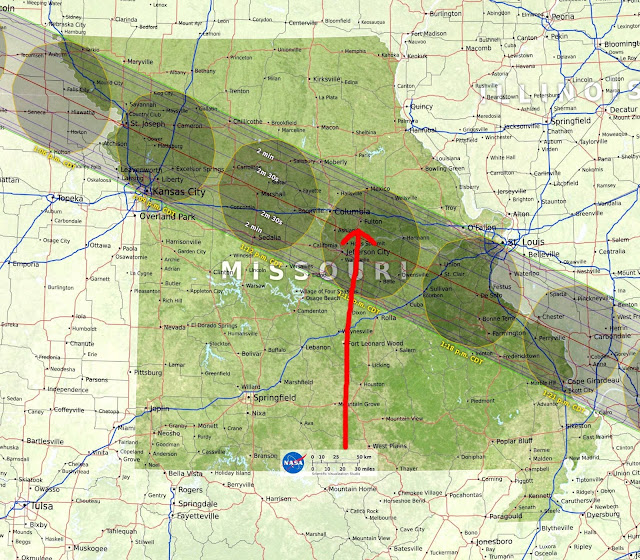 friends are headed to various places from Charleston SC to Wyoming - but we decided to combine this with a trip to the Churchill Museum in Fulton MO - site of the "Iron Curtain" speech... you know historians - LOL - we think a visit there would be FUN! LOL.... stay tuned!
Posted by TOR at 12:57 PM