So we have had a whirlwind summer so far and we aren't really even quite half way.  It's no excuse for the dearth of posts but it is an accurate statement. During the period where we were fully in wedding mode I got the idea to write about the Grandpas. It was spurred on by two things- this post from the Center for the Great Apes which is an organization we support. It is a rescue facility for chimpanzees and orangutans.

I favor the orangs over the chimps but this info about two new chimp residents really grabbed me. And if I am losing you already this post is NOT about chimps and IS about the four grandfathers Phil and I have.... so hang on....

Just two weeks ago, we had an emergency call about two adult male chimpanzees in Oklahoma (Joe and Bo) who needed an immediate home. They lived in separate cages and had never been together.

Even though we’ve not yet finished our expansion construction for additional space, the need for this rescue was urgent. So, we drove to Oklahoma (with our veterinarian) and picked them up. They arrived here last week after a 22-hour drive back from Oklahoma, and we have them in our quarantine area at the veterinary clinic for the time being.

Even though Joe and Bo had never been in the same space together, we introduced them after they arrived here, and it was heartwarming to see how happy they were to be with each other! Right away, they began softly panting and laughing while they hugged and groomed one another.

Joe (believed to be in his 60s) was wild-caught, and as an infant, was used at a major Midwest zoo in their old “chimp shows”. When he grew too big to perform, he was sent to a drive-through safari park in Oklahoma. Joe and his mate Lily produced many offspring at the safari park, but the infants were sold as exotic pets or as entertainers. Amazingly, we have four of their offspring already living here who came from entertainment and from the pet trade – Murray, twins Jonah & Jacob, and Ellie.

After the safari park closed, Joe and Lily were sent to a California trainer for use as breeders. But it didn’t work out, so Joe and Lily were moved again to a private zoo in Oklahoma where they were held in small cages for 11 years. Unfortunately, Lily died there a few years ago.

The other chimpanzee, Bo, is thought to be in his 30s. He was also in the entertainment business in California where he produced at least one infant … and then was sent to a Missouri facility before finally ending up in Oklahoma.

But what we discovered after they arrived is that our little 9-year-old Bentley (who was sent to our sanctuary in February along with two other former entertainment chimps) is actually the grandson of both these older males!

These two unrelated chimpanzees living in different states for many years each sired offspring who were used in the ape trade business. One of Joe’s daughters and Bo’s son now live together in Missouri and are the parents of Bentley!

So they are both Bentley's grandfathers who coincidentally ended up in Oklahoma from different owners. Joe and Bo now peacefully live together at CGA, and we refer to them as “the grandpas”. 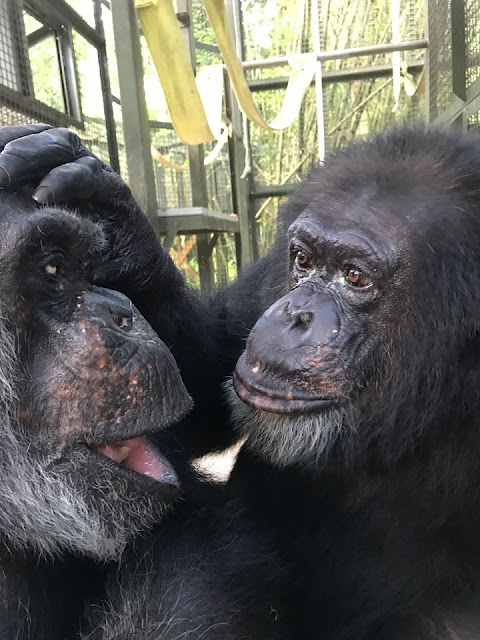 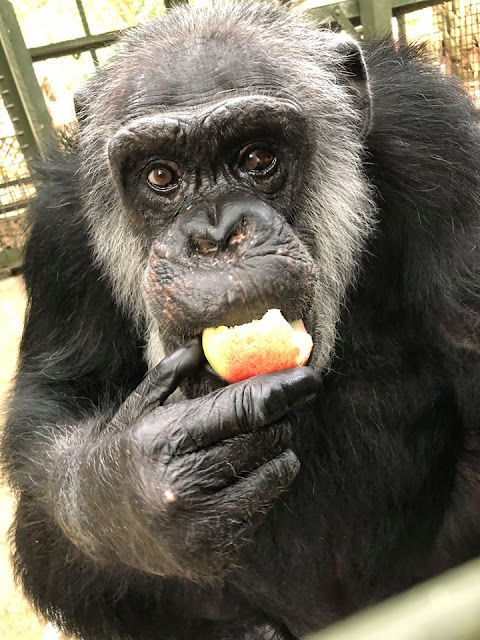 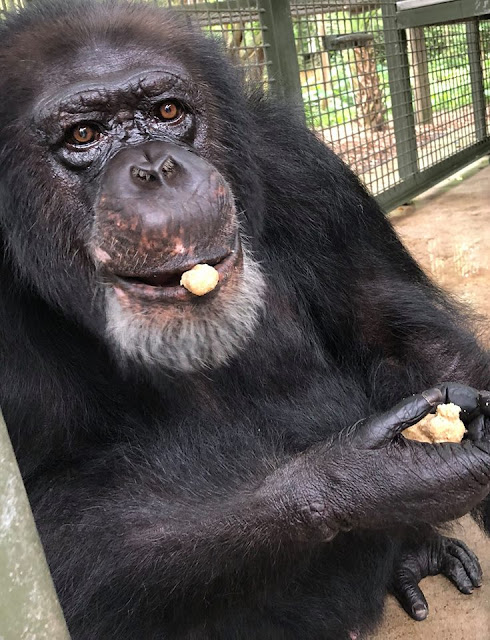 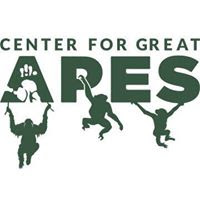 I love their expressions and how much they look just like grandpas- I wonder if they will get a chance to meet and dote over Bentley their common grandson...  what a heartwarming story.

And while sadly both Phil and my grandfathers had passed away by the time we met, we had wonderful grandpas too! So this is a short tale of who they were and it starts with a camera... and a wedding photo from Angela's recent wedding... 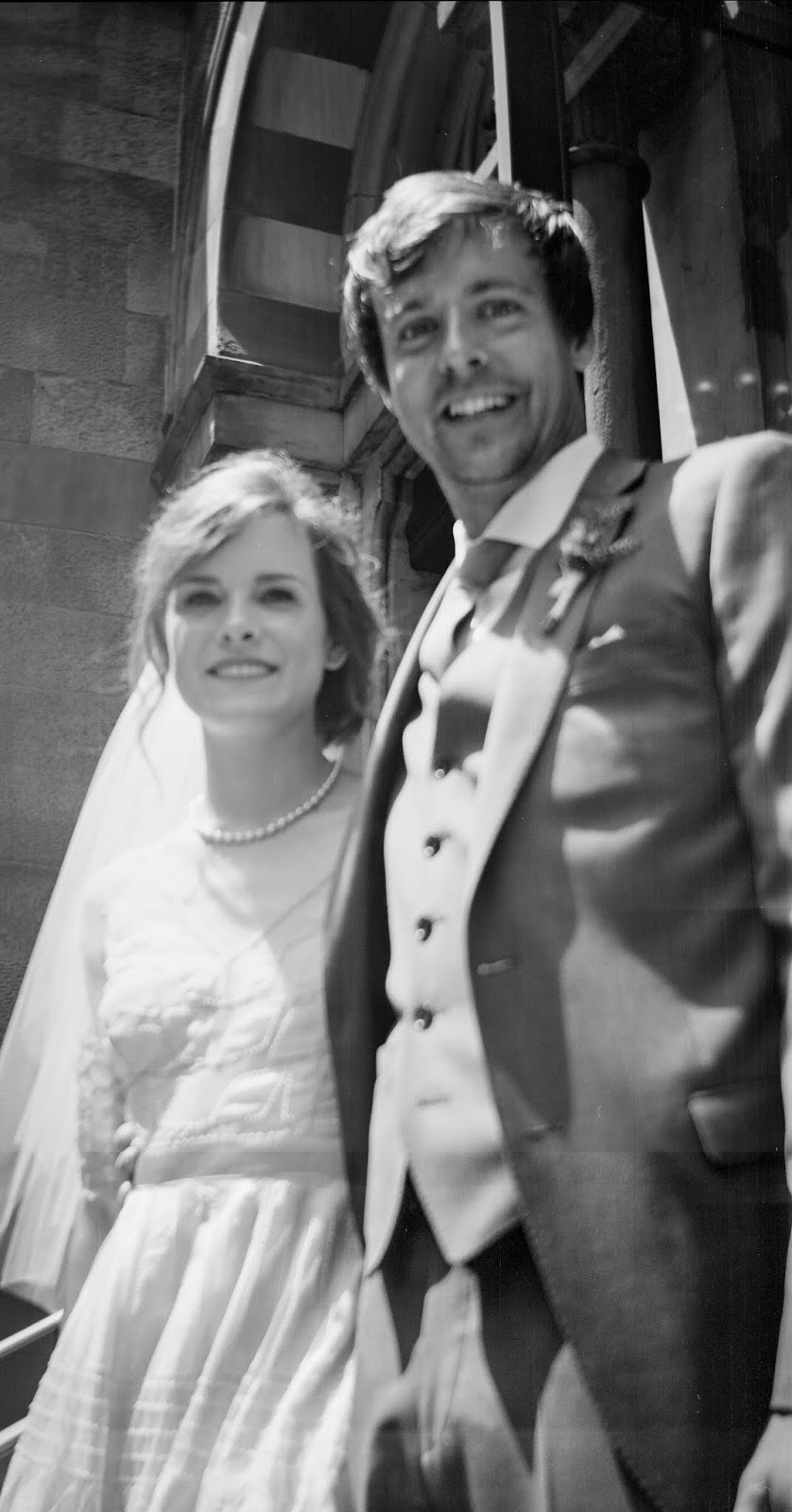 and this photo of the bride - the groom and the bride's grandmother - Grandma Sue who made it to the wedding in her ninetieth year on the planet, where it was recorded with the EXACT SAME BROWNIE CAMERA as her first year on the planet.  Yes that's right - her father - Phil's Grandpa Joe Lerner bought a box camera to take photos of his first born child his daughter Rita Sue (always known as Sue) 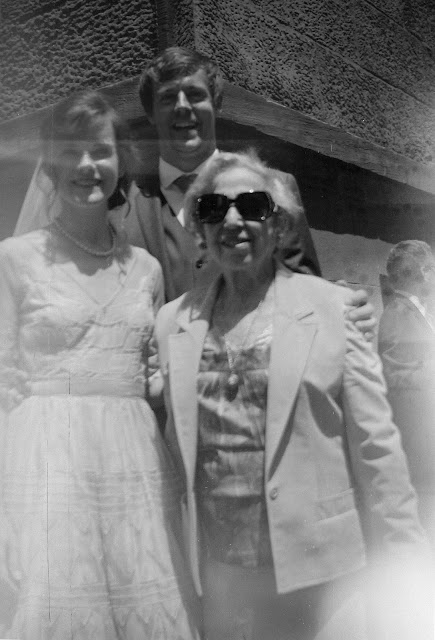 They no longer make film for the camera but you can buy spools of 120 loaded onto retrofitted spools. It is hard to load as the whole camera inner workings must come out to load the spool across the back.  The shutter mechanism has no timer or or release you just flip is and open the shutter for a short moment - the high speed film and full sun do the work as the camera has no real mechanism.  It is a box with a small lens opening- which by the way you see upside down and backwards in a tiny (and I mean tiny) window... oh and you have to guess when you have to wind it to the right point on the film because it is sized differently than the numbers so you stop at 3 and 1/2  and 6 etc...

So to say the photos at the wedding were a "crap shoot" was not at all an understatement...LOL

From wikipedia
Brownie is the name of a long-running popular series of simple and inexpensive cameras made by Eastman Kodak.

The Brownie is among the most important cameras in history. 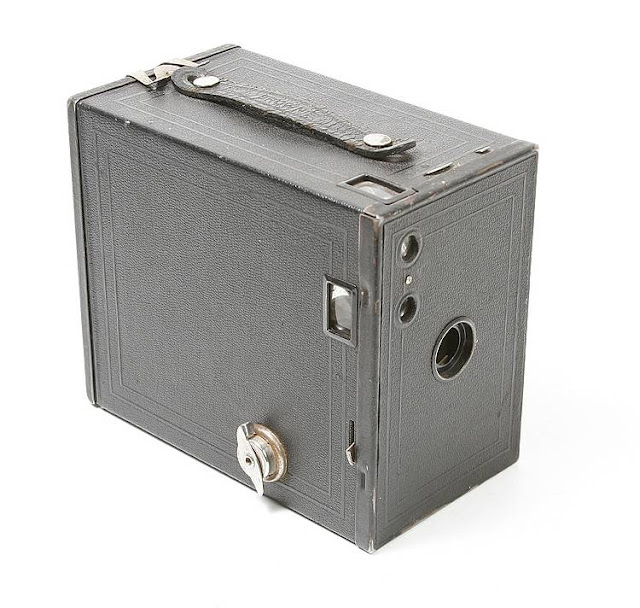 The Kodak Brownie Number 2 is a box camera that was manufactured by the Eastman Kodak Company from 1901 to 1935. There were five models, A through F, and it was the first camera to use 120 film. It also came with a viewfinder and a handle. The Brownie Number 2 was made of a choice of three materials: cardboard, costing US$2.00, aluminum, costing US$2.75, and a color model which cost US$2.50. It was a very popular and affordable camera, and many are still in use by film photographers. 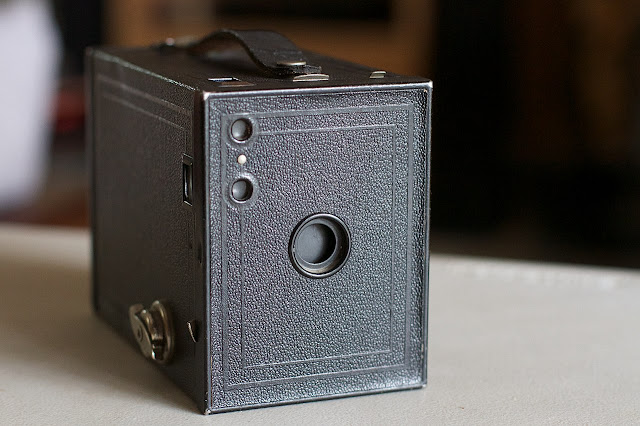 Even though it’s an early camera, the Kodak No. 2A Brownie Model C has some features that are still interesting today. One extremely interesting feature is that the 2A Model C has two viewfinders – one for portrait mode and another one for landscape mode. Along with two viewfinders, the 2A Model C has two tripod bushes so that you can mount the camera in either portrait or landscape mode. The 2A Model C also has a “B” setting for long exposures and an interesting shutter release that works differently from any other I’ve seen. The “B” mode switch is a little tab on top of the camera that you lift up. When the tab is down, the shutter release will momentarily open the shutter every time you move it from one side to the other. You operate the shutter by toggling it back and forth, either up and down or left and right, depending on the orientation of the camera. Each time you switch it from one position to the other the shutter will quickly open and close. When you lift the “B” tab, the shutter release will keep the shutter open until you switch it back to where you started – either down-up-down or up-down-up. Interesting. The other tab next to the “B” tab is the aperture setting is the aperture switch. It’s just a metal plate with three holes in it. The instructions just call them “Small”, “Medium”, and “Large”. The actual apertures are close to either f/11, f/16, and f/22; or f/16, f/22, and f/32 depending on whom you believe. The No. 2A Brownie was designed for a film that is no longer available, but you can use 120 film in it

but Grandpa Joe wasn't the only Grandpa in this story who had a love of cameras- I had two grandfathers who had love of cameras in different ways-  My mother's father King who we referred to as Granddad was a traveler and always had a camera with him.  My father's father Ed- who we referred to as Pop Pop - was in PR much of his career life and during the Depression he traveled around the country making films for the National Underwriters (I guess fire safety and such...)

here is a photo of him from that era - 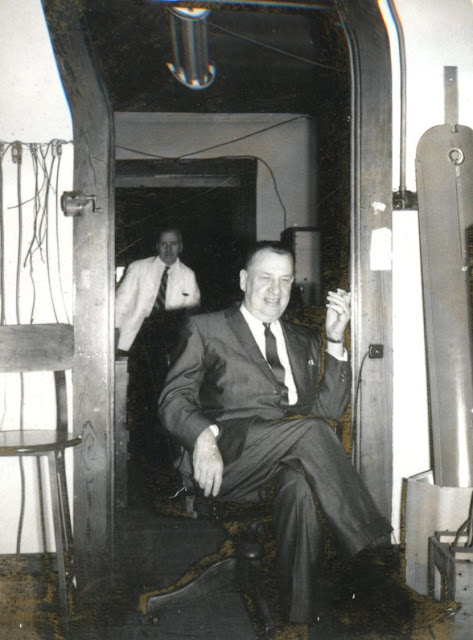 and here is a short film he made of his own family with borrowed film equipment- starring his father and wife and son (my dad) - this film would have been taken before my great grandfather died in 1937... 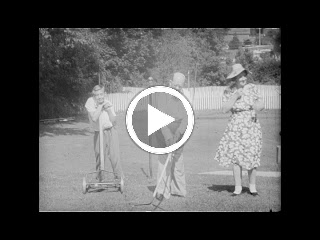 Phil adored his grandparents Norma and Joe Lerner and the feeling was mutual. He was their first grandson and how lucky they were to get such a handsome genius like Philip LOL - and if you were your grandparents first born grandchild you know the same sentiment holds true for you LOL. 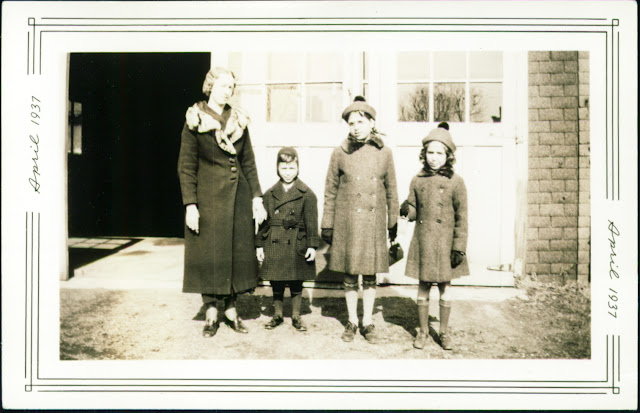 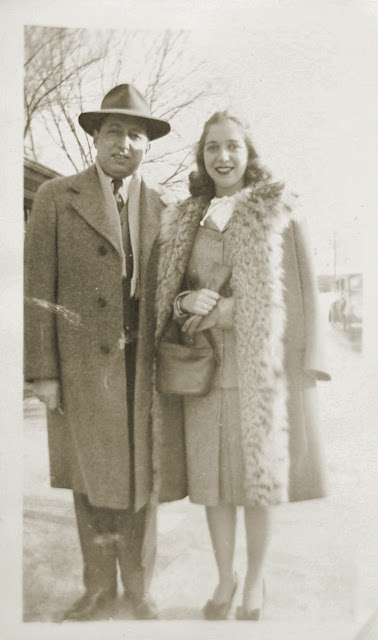 Sue and Grandpa Joe in a later photo but likely the same camera given the size and format.
And another from that era- 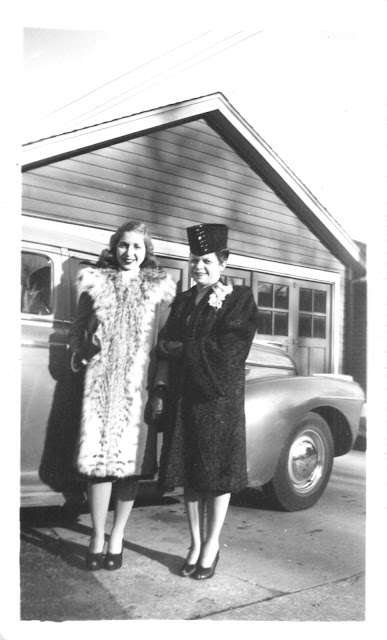 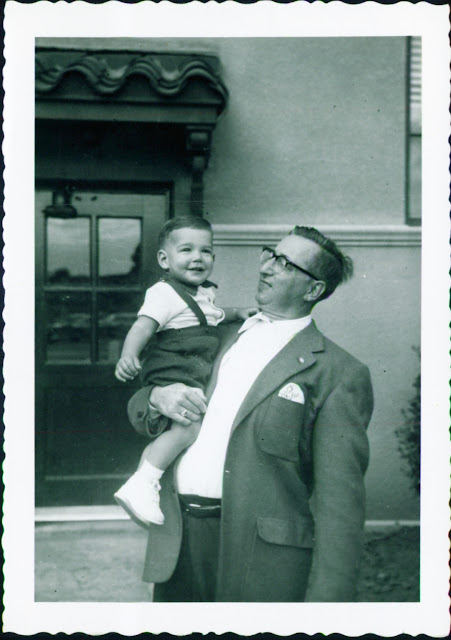 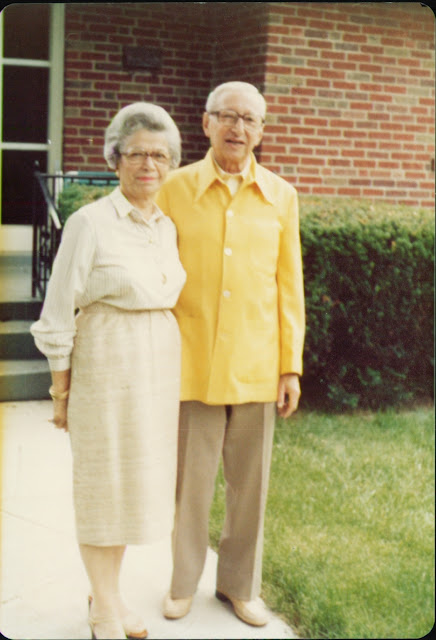 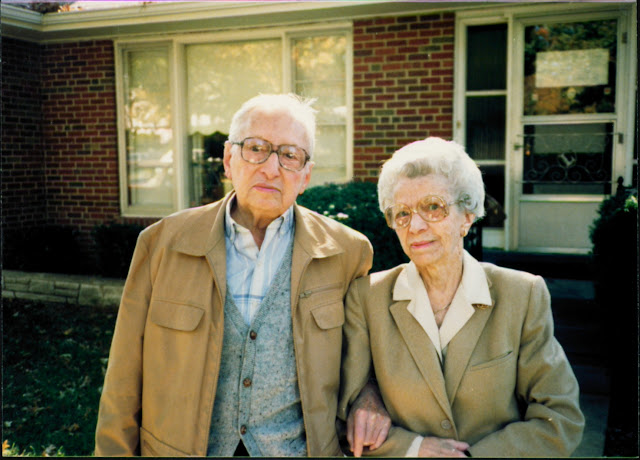 and here is one of my mother as a toddler with her mother - my grandmother Catherine McFarland Cox Haight  - who everyone called Lovie except my Dad who called her Katie. 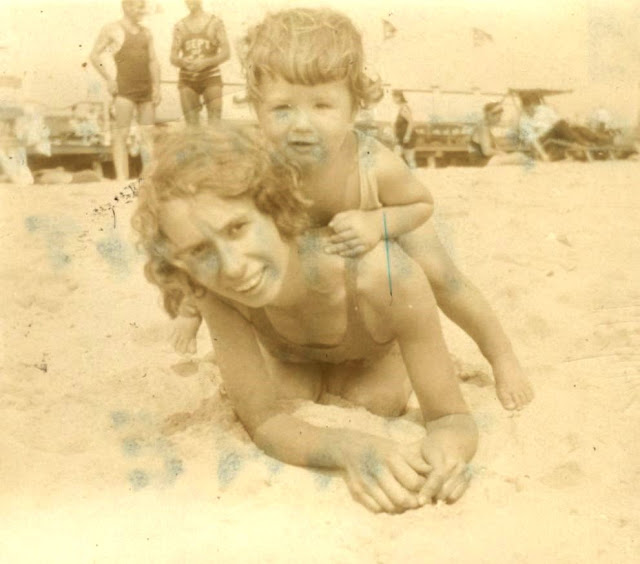 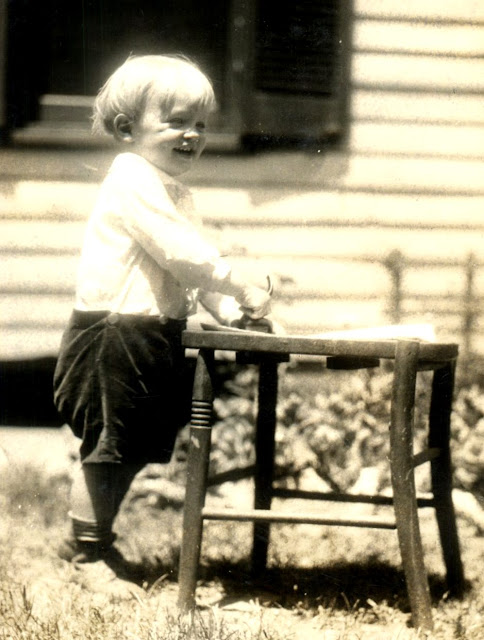 as I said we have plenty to choose from - and here is one of me with my great grandmother's sister Aunt Fan! (Frances Hill Pieck) 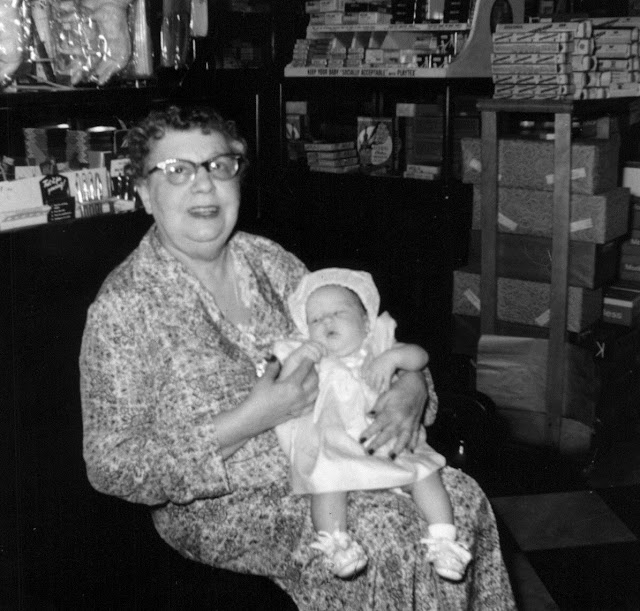 she was one of the stunning Hill sisters shown below- with my great grandmother Minnie in the red circle and Fan next to her the others were called Teensie and Lillie... 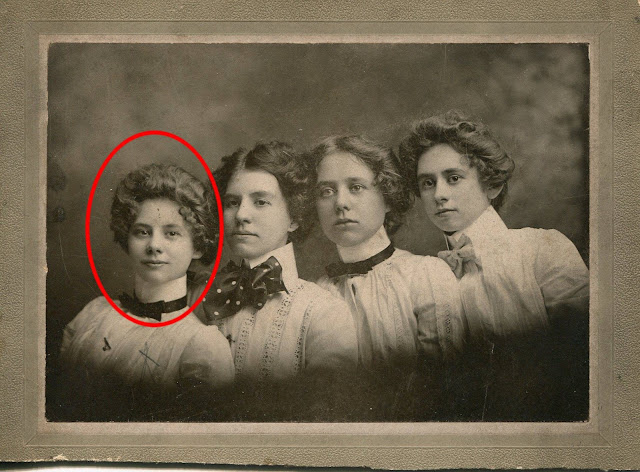 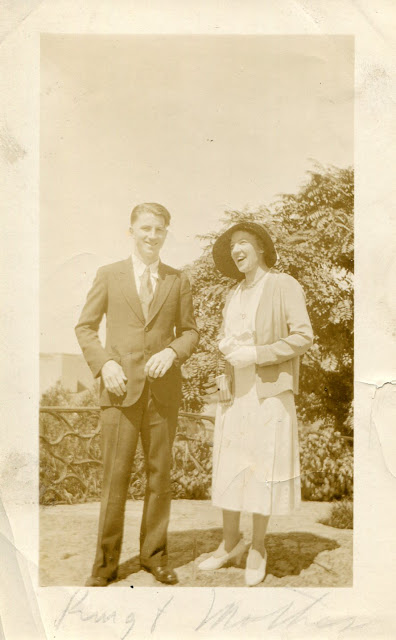 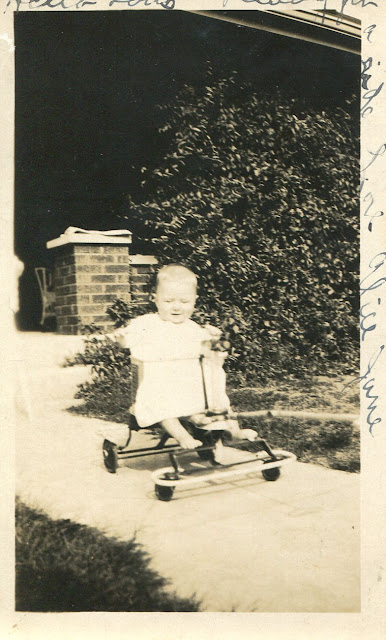 and here is a Granddad and me photo from 1955 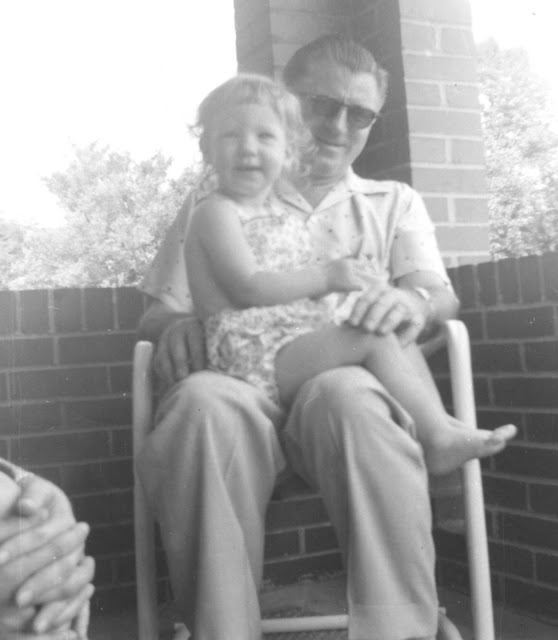 but you get the drift of it- LOL - grandpas have cameras for a reason and now of course we just pick up our phones and snap photos like this one of Phil and his surrogate grandchild Alix- who is now already 7 but in this photo she was almost one whole year old! 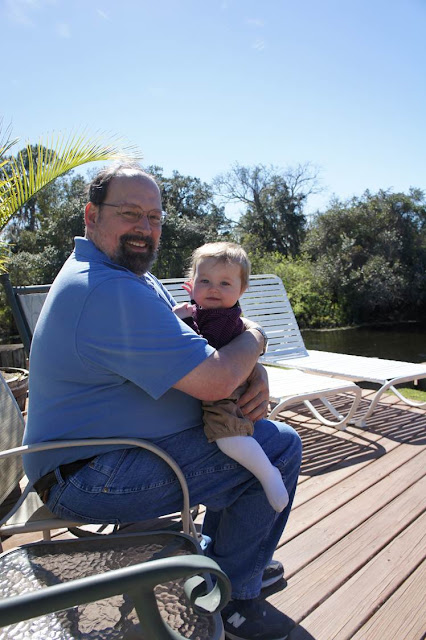 so the thread continues to run through the lives of families everywhere including the non human ones we started this story with- Bo and Joe the chimp grandpas!
Posted by TOR at 2:55 PM