last night we went to a dinner featuring the wines of Bibi Graetz.  he is a norwegian-israeli who lives and works in Italy.  he was trained as an artist and now creates wine art by way of his focus on very old old vines around Tuscany. my favorite wine of the night was the Bugia Bianco made with ansonia grapes from the island of giglio.  he uses vines that grow in rocky soil which are more than 80 years old!

the menu was deftly prepared by Chef Bryan Moscatello who is about to open here in Chicago at 1941 W, North Avenue - the new place will be called Store Front.

the event was limited to four tables of 6 to 8 people and gave everyone time to enjoy the wines and food and discussion with the wine maker who is an extremely charming guy who is fulfilling his own vision of winemaking outside mainstream techniques.

his most famous wine Testamatta has been called the best wine in Europe for several vintages and has been rated in the mid to high 90s each year he has produced it.  it is very big red super tuscan style wine made of 100% sangiovese from 35-80 year old vines.

did not have camera for photos but did bring home the menu to share: 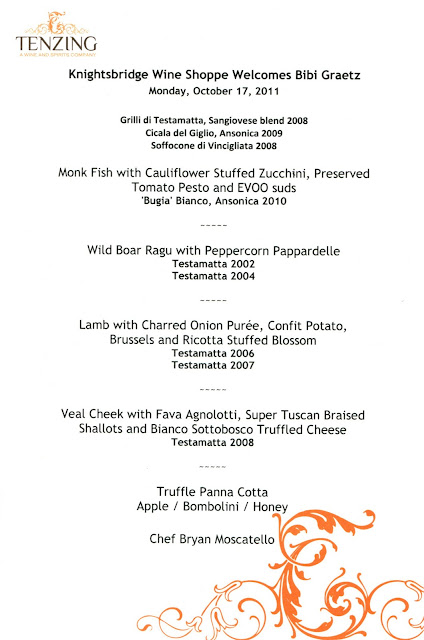 this is a photo of the vines on the Isola del Giglio where the white Bugia is made! you an see the incredible setting for these grapes - right on the sea and growing out of the rocky hillside on what Bibi called low vines... 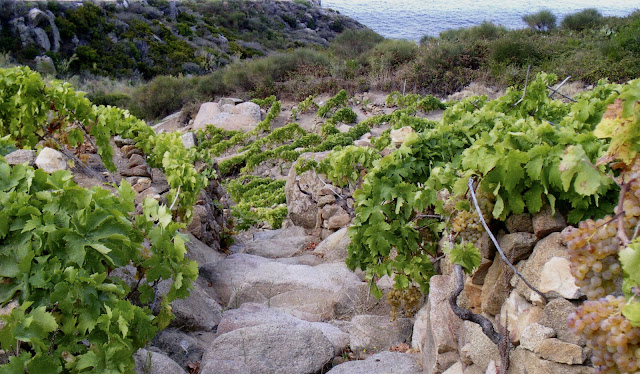 I am intrigued by this grape and told Phil we should see if there are others working with it at a bit more reasonable price point- it is always good to find alternatives to white burgs (chardonnay based) we drink so much of them when chosing white- and while we always have some pinot blanc and some gewürztraminer and some torrontes - more choices can't be bad...
Posted by TOR at 12:44 PM