so I bet you were wondering where I have been- I eat a great meal celebrating our twelfth anniversary and then "disappear"-  no, actually I have been busy with projects---

the morning after our meal at Goosefoot I got up and drove a rental SUV to Florida with a ton of stuff for the condo.  I had with me quite a bit of furniture (some of which you will see in the photos) and some of it had "some assembly required" LOL- aaaaccckkkk!

oh and I may not have mentioned this before but when we left at the end of March, I had left behind six dining room chairs which needed to be assembled as well! I had read the reviews of the process online and decided that it would be good to attack that project when I had much more time and could take it slowly- maybe set a goal of two a day and not go crazy - more on that later...

the first day of driving I put in the long hours and got more than half way stopping in Kennesaw GA for the night... meanwhile Phil had left town as well - to meet up with Jeremy for a weekend of folk music in upstate NY.  My second day of driving was shorter and I got to our Florida home before sunset....

now here is the thing- everyone complains about how busy it is in "season" in Florida so I was looking forward to having the place all to myself in hot and humid and rainy late June and early July.... but the first night I went out to the Beach House on Anna Maria Island thinking I would have a drink and a grouper sandwich and watch the sunset... LOL- how about NFW?  There was absolutely NO WAY I was going to get near the place all THREE parking lots were completely full! and guess what? The Oyster Bar parking lot was as well but since it was already getting closer to 9PM I stopped there and had a quick dinner.

I discovered that I had to wait with more people than "in season" for Tyler's Ice Cream (a shout out to Alicia!) and pretty much everywhere I went there were far far more people than I had expected.  Turns out the fourth of July week (which I had fallen into the start of due to the 6/26 anniversary dinner) is the busiest week of the summer on the island.... as I said "who knew?"

But back to my tasks- I unloaded the car into the garage and told myself - no need to rush - I have  four and a half days to get things done... so I crashed after 22 hours of drive time and got started on Saturday morning. First unpacking the little stuff and then working on the assembly items... The two tables went quite quickly - only eight screws each and getting them set up made a real difference in reducing the "warehouse" look of the living room, especially once I got lamps on the tables and a couple of coasters. 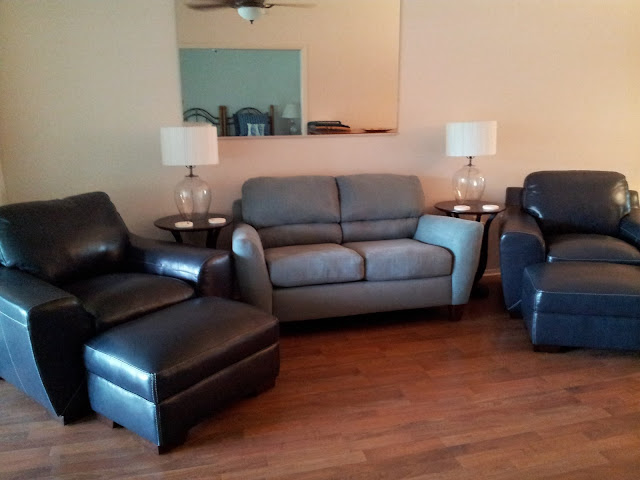 I had tickets to the theater for Saturday night so I didn't want to start on the chairs until Sunday when I could work un-interrupted... so I did some paper work (inventory of things we had left in March) and some closet organizing... then off to the play.

It was a one woman show called My Brilliant Divorce and there were some funny lines but I found the actress' voice annoying - too whiny for my taste - and so I kind of sided with the deserter husband rather than identifying with the one and only character in the play (something I would have to call a fatal flaw- LOL.)   There was a really really cute mechanical dog that went in and out of the scenes on cue who was absolutely adorable- too bad the main character wasn't nearly as likable. (oh and by the way- the photo was clearly the bat mitzvah photo of the actress- who was probably not Jewish but who HAD aged considerably since this photo was taken) 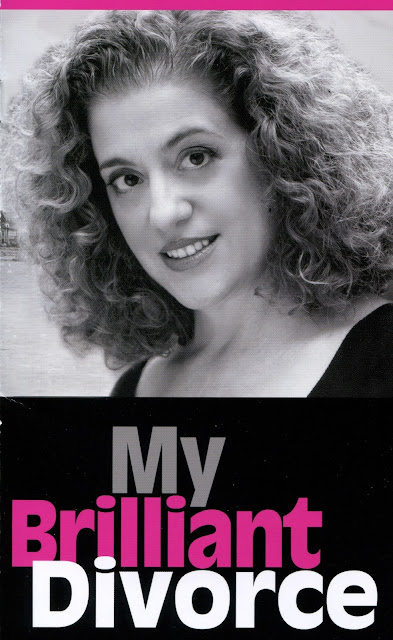 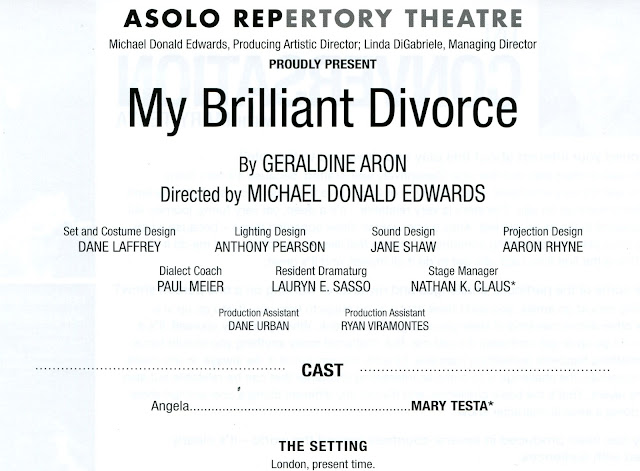 the back of the program was hyping the next season at the Asolo Rep- which is a marvelous theater company and something we enjoyed last year as you know if you follow this blog. 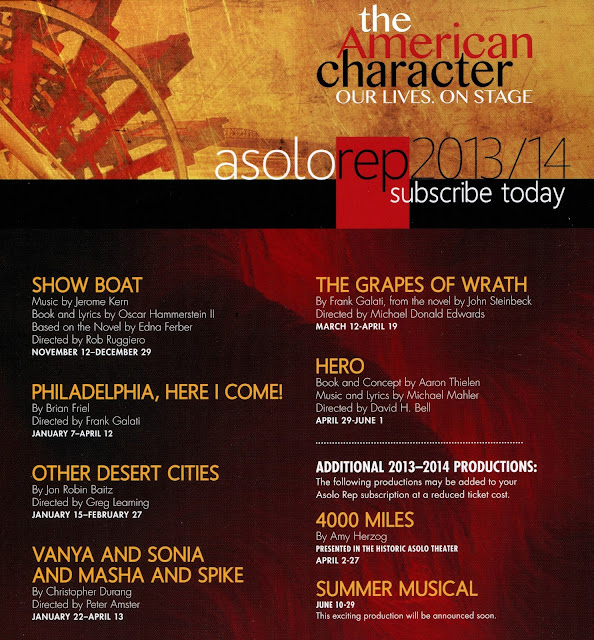 Sunday came and it was time for the chairs..... they came two to a box so I took out all the parts to two chairs on Saturday night and set up a work station on the already assembled table (four legs- no thing complicated there) and read the instructions carefully so I knew what to look forward to on Sunday...

The thing is- as with pretty much all the world -  a large amount of the assembly is done with a tiny little Allen wrench.  Or I guess that should read an ill fitting Allen wrench.  This is like some huge joke that the Chinese have played on us...   They probably think we haven't noticed it, being thick headed good natured bumbling Americans (as they see it) and are laughing heartily as they put ALMOST all the parts - but not quite all the parts- into the thousands of boxes they pack a day for their thirty cents an hour salary.

And any complaints about the missing parts will be met with an even toned response of "the instruction booklet says is to make sure to count all the parts before beginning assembly" - LOL  Being an old hand at furniture assembly after putting together the 256 part recycling bin back in March (sadly, no exaggeration) I dutifully matched the parts list with the actual parts  before embarking upon my assembly project!

Sunday was the big day of assembly- the instructions were extremely simple (unlike the recycle bin) and involved a merely 24 screws and 6 washers a chair- but unfortunately a dozen of them involved the dread Allen wrench.  But I gamely set off on the first chair taking my time and reminding myself to be patient and work slowly and deliberately.  And to my surprise everything went very smoothly until the seat placement which I just couldn't get to fit snugly to the chair assembly on one side.  So I worked a bit on that.  Still all in all - pretty good for the first one- less than a half hour. The second one was only about fifteen minutes again going slowly and deliberately.

A huge victory - two chairs done in less than an hour!

So I unpacked another box of two and left them for later in the day - first - ha ha ha ha ha - double checking that the parts were all there before proceeding with assembly! Those also went smoothly and so before I went to sleep that night I laid out the parts for the final two chairs.  I had planned on doing four and had given myself permission to stop at four on this trip rather than drive myself crazy a la the recycling bin... 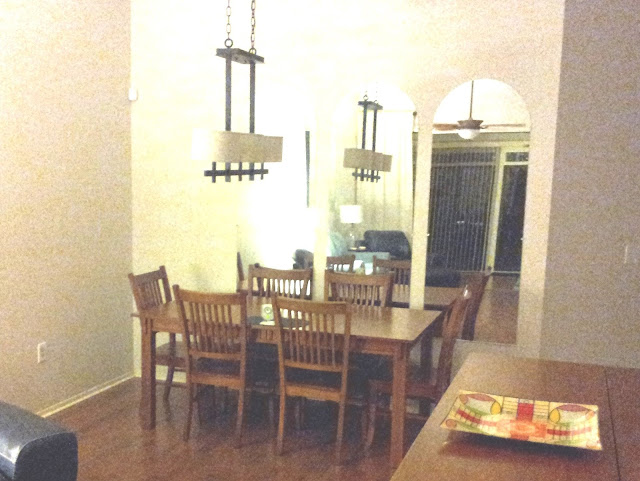 Meanwhile I was also visiting the ACE hardware for various items to assist in other decorating projects (picture hangers, feather duster, etc.) and cleaning parts of the house that had gotten dirty while we were away - along with visiting the recycling center to drop off the boxes all of these projects had come in...

But by Monday evening I had actually accomplished the furniture assembly along with the unpacking and storing of other things and hung three pictures and laid down three rugs and things were looking good. 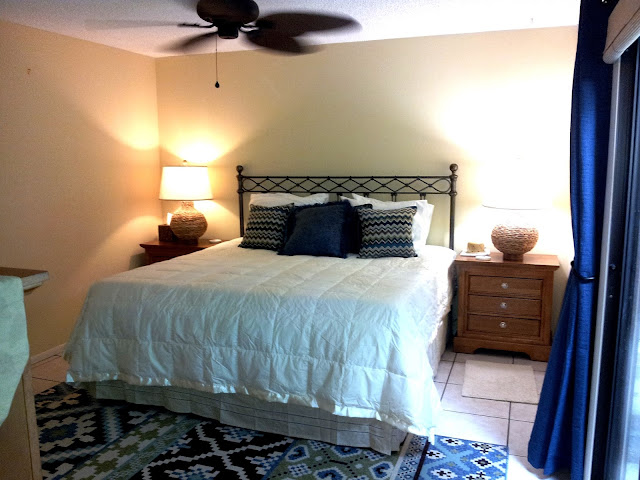 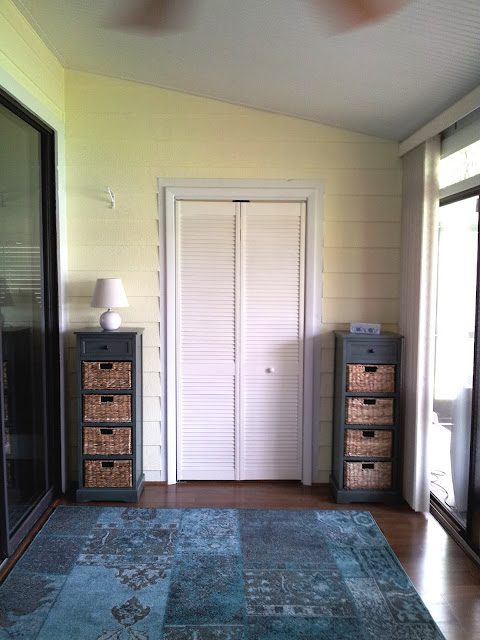 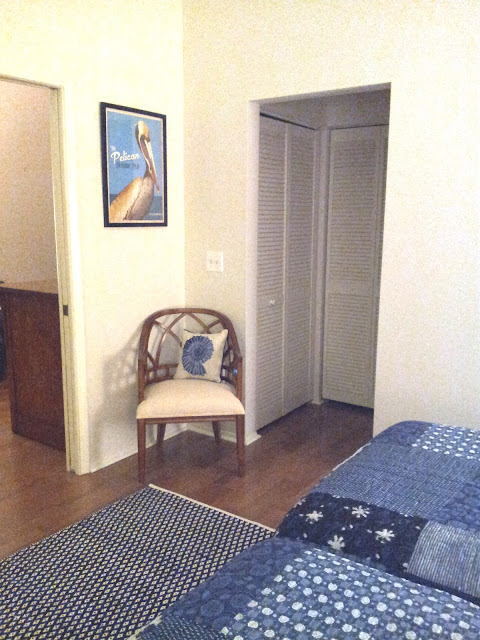 It had been raining steadily for days and so when we got a brief respite I went outside to take some photos of some of the plants in the yard that flower in the summer.  Since we left they had trimmed the foliage in front of the screened porch and now we have an improved view of the lake- 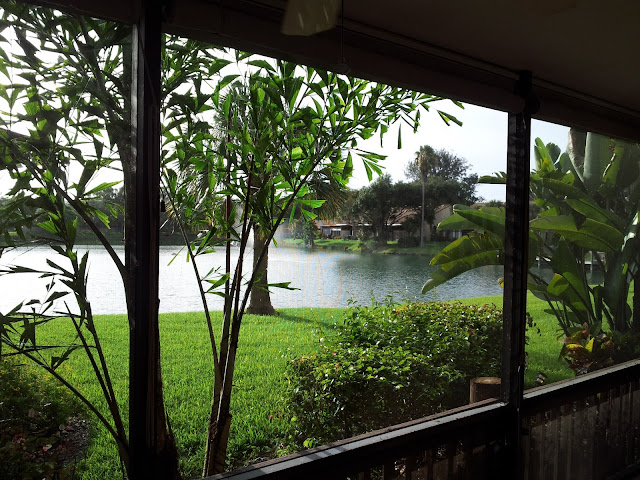 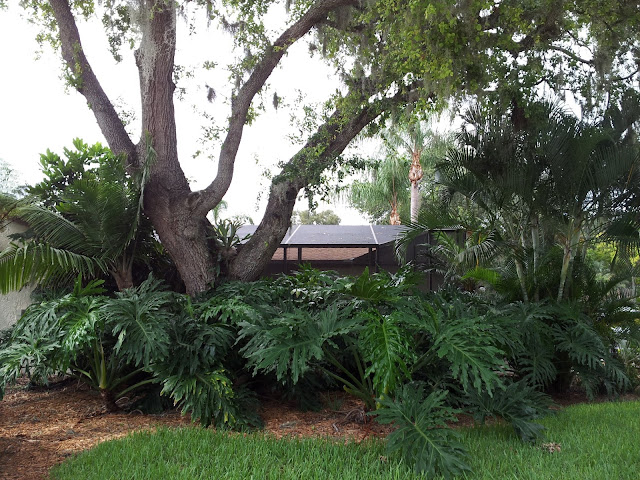 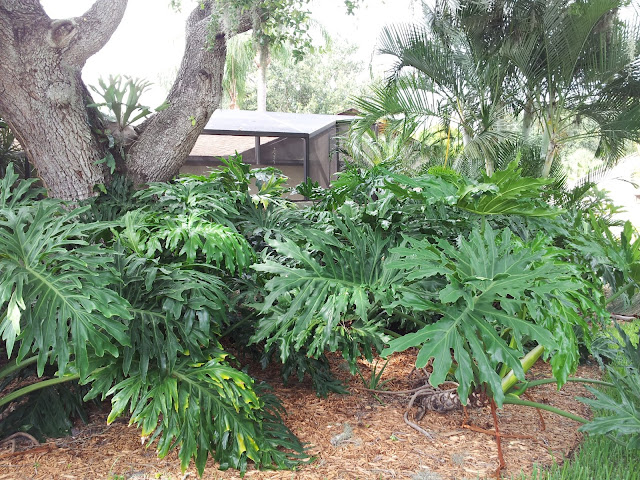 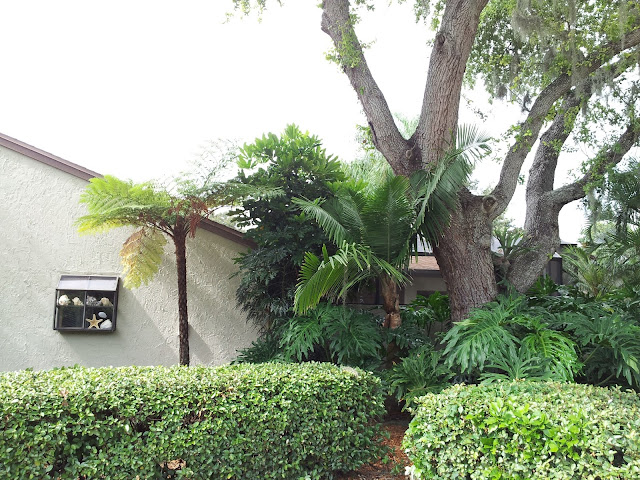 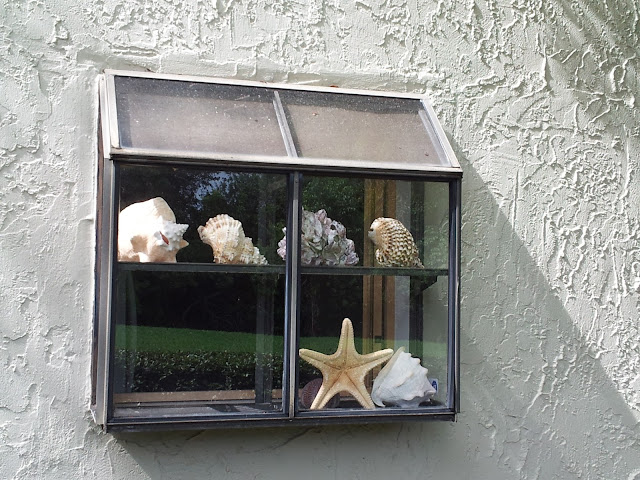 when I took the above photo I still had a quarter of the window to fill in...which I did before I left late on Tuesday- 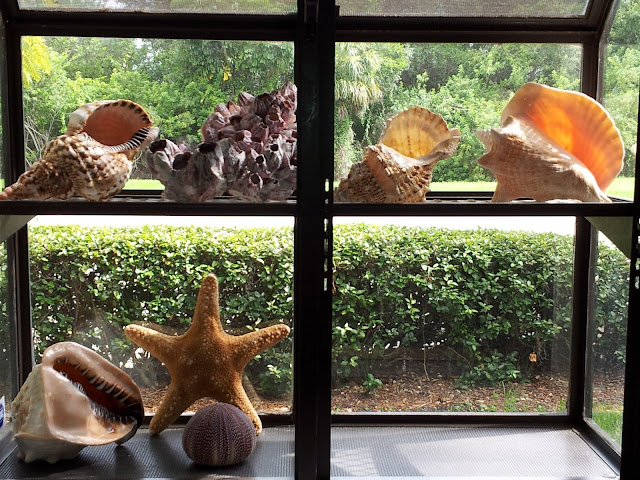 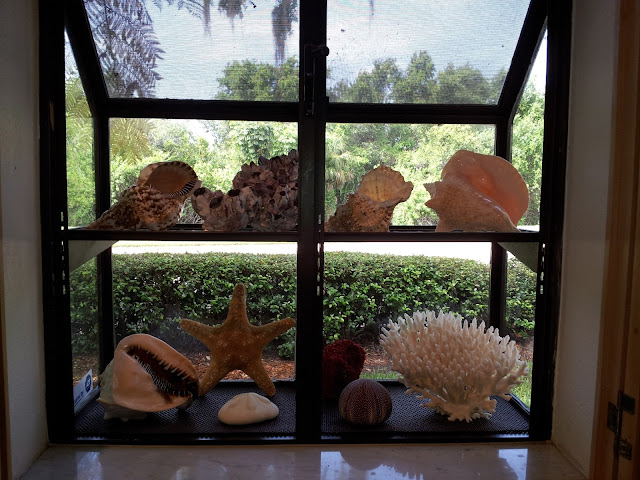 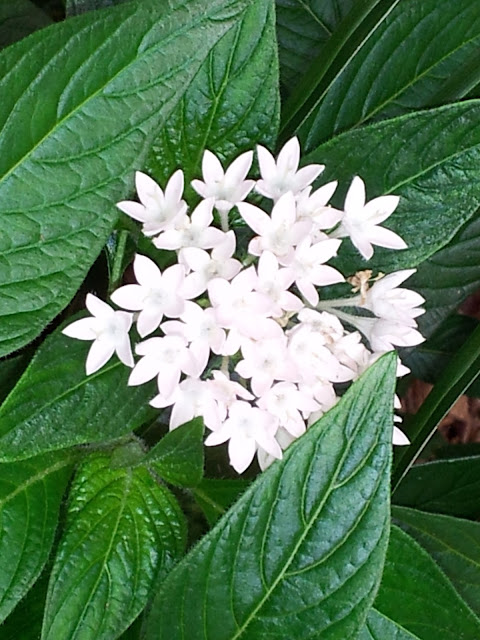 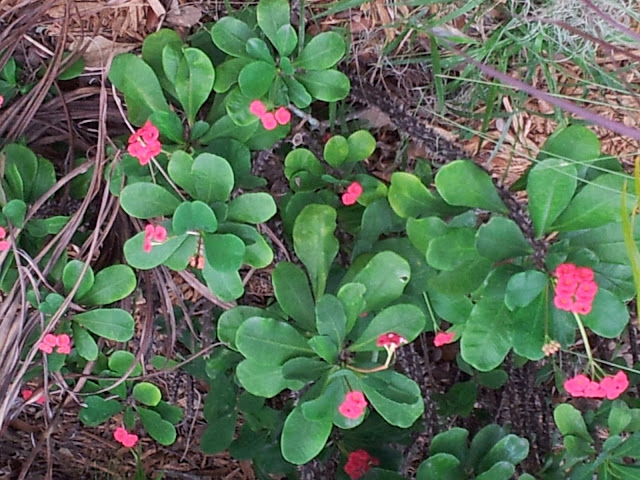 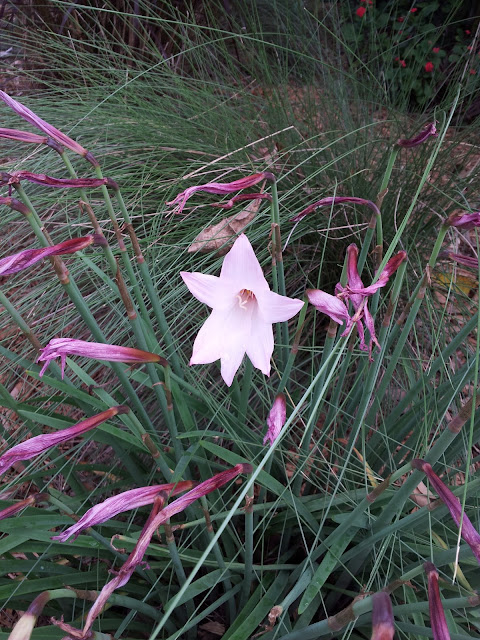 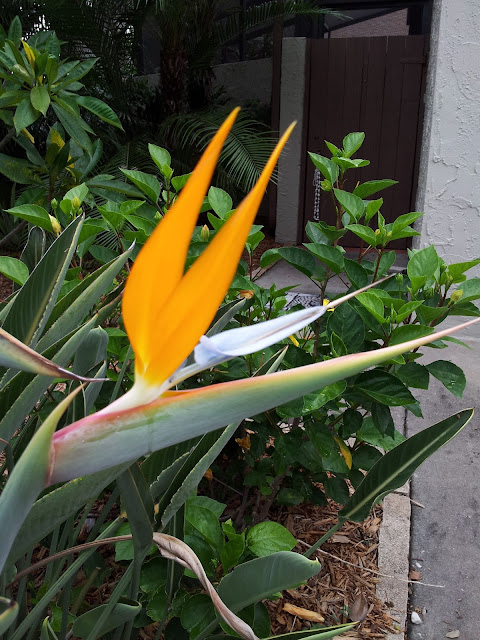 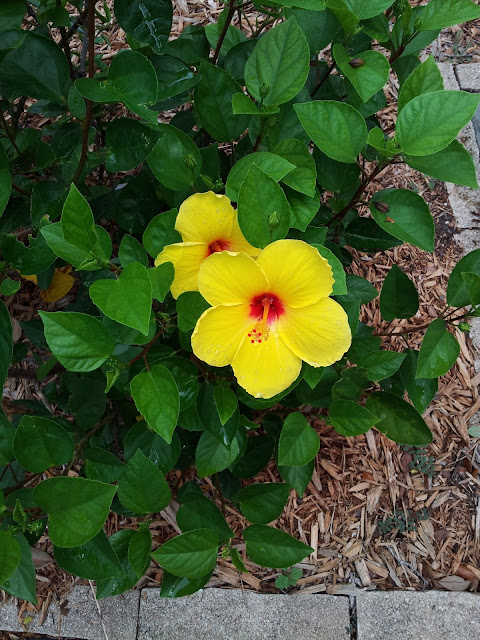 and here is our new front door welcome wreath - LOL OK so this may be too much detail of my last week of work but it will end soon so keep the faith... like the Buddha in our courtyard- remain serene.... 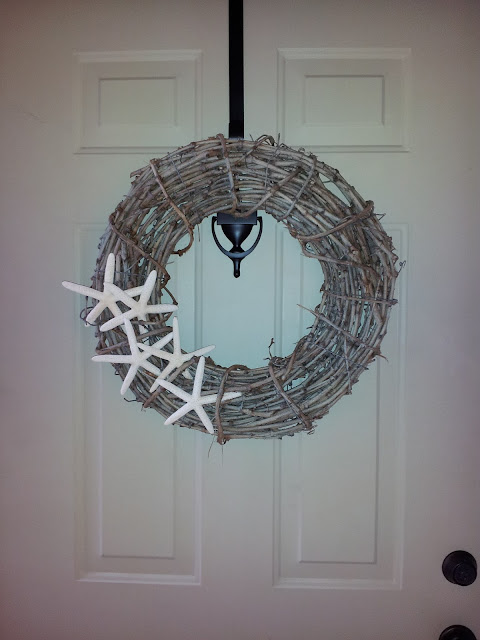 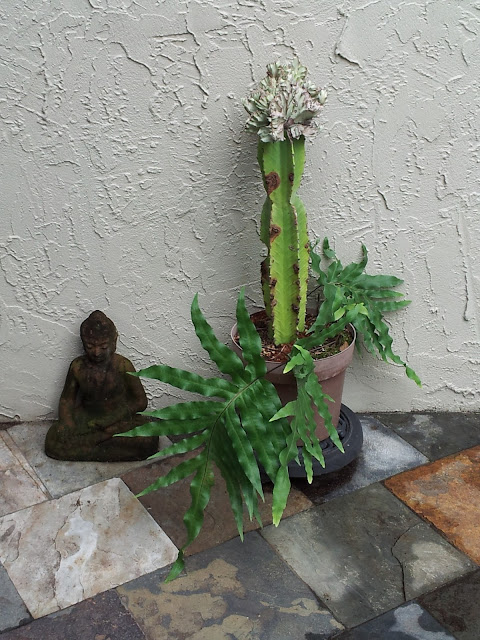 by the way that was a cactus scheduled for pitching when we left- now there is something else growing in the pot and it looks pretty decent so it will live until that fall at least....

the screened porch got a new outdoor light for our return- since I was only there a few days I didn't get all the furniture for the porch out of the garage--- there is a bistro table and chairs for the far end of the porch... breakfast anyone??? 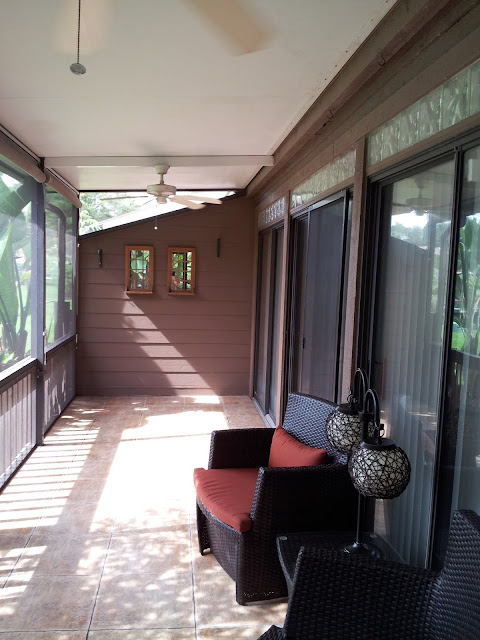 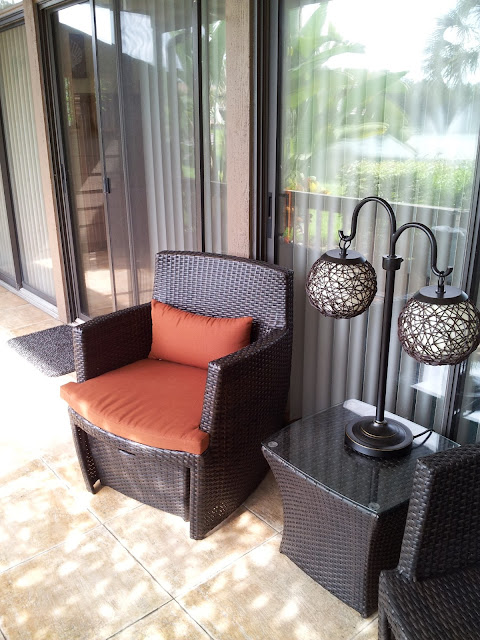 and a few final photos- I came home to Chicago and finally got my flowers planted on July 3rd--- with the hydrangeas in full bloom mode (something that hasn't happened in a number of years) we are now ready for our weekend picnic/BBQ get together with friends! 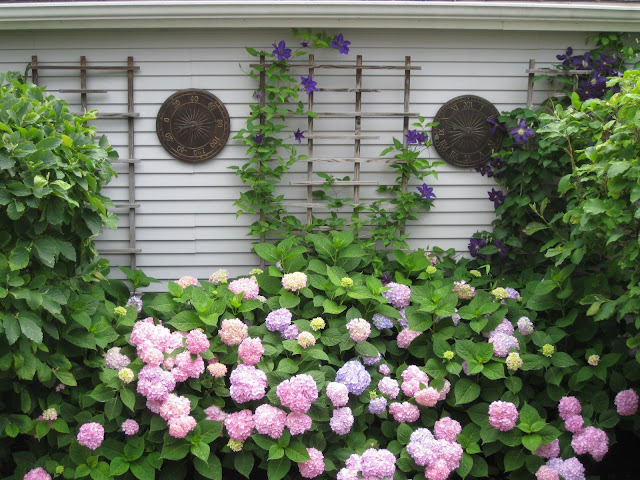 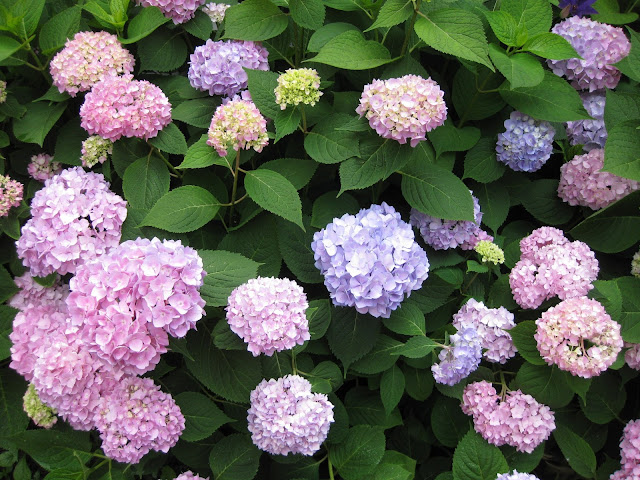 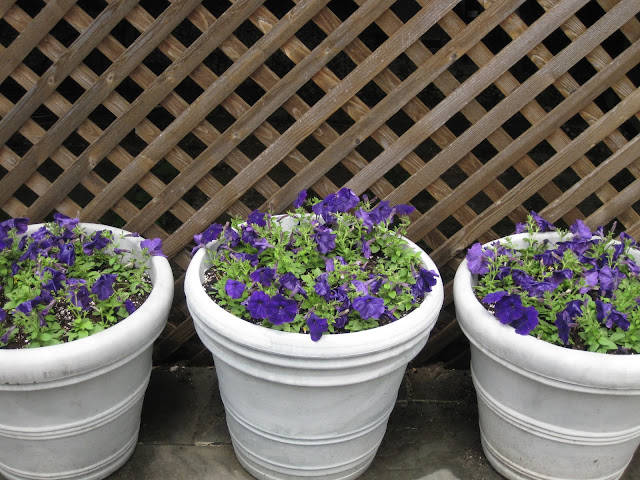 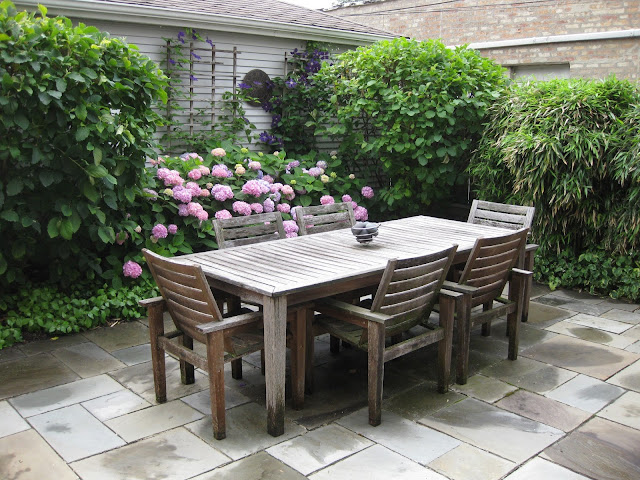 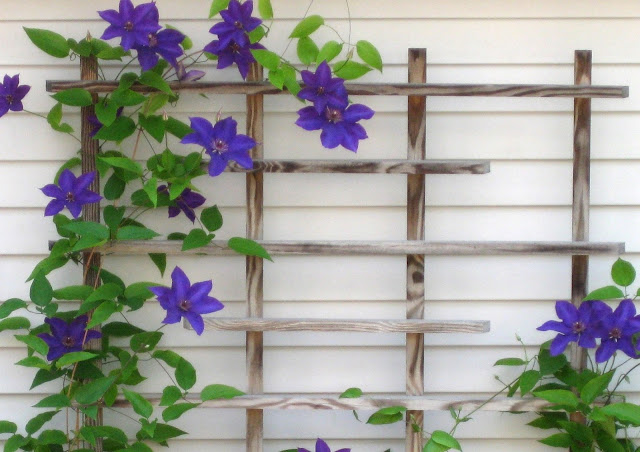 oh and PS - don't tell Lucy but a number of her gecko friends were looking for her in Florida! 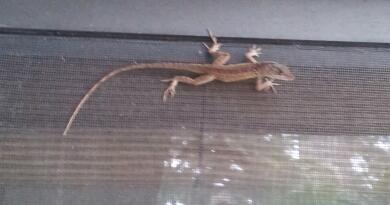 so there you have it- caught up on my week (oh I did forget to mention two holiday celebrations- including fabulous ribs by Sheila and tres leches by Mary on the 4th of July at their place!) as always - more to follow....
Posted by TOR at 4:45 PM