here is the thumbnail so you can skip the details - he promised my new awning for my south facing deck for June 17 (6 weeks from the deposit date of 5/6) on July 2 the crew came to install most of my awning but will have to return for more, because part of it did not arrive in time --- 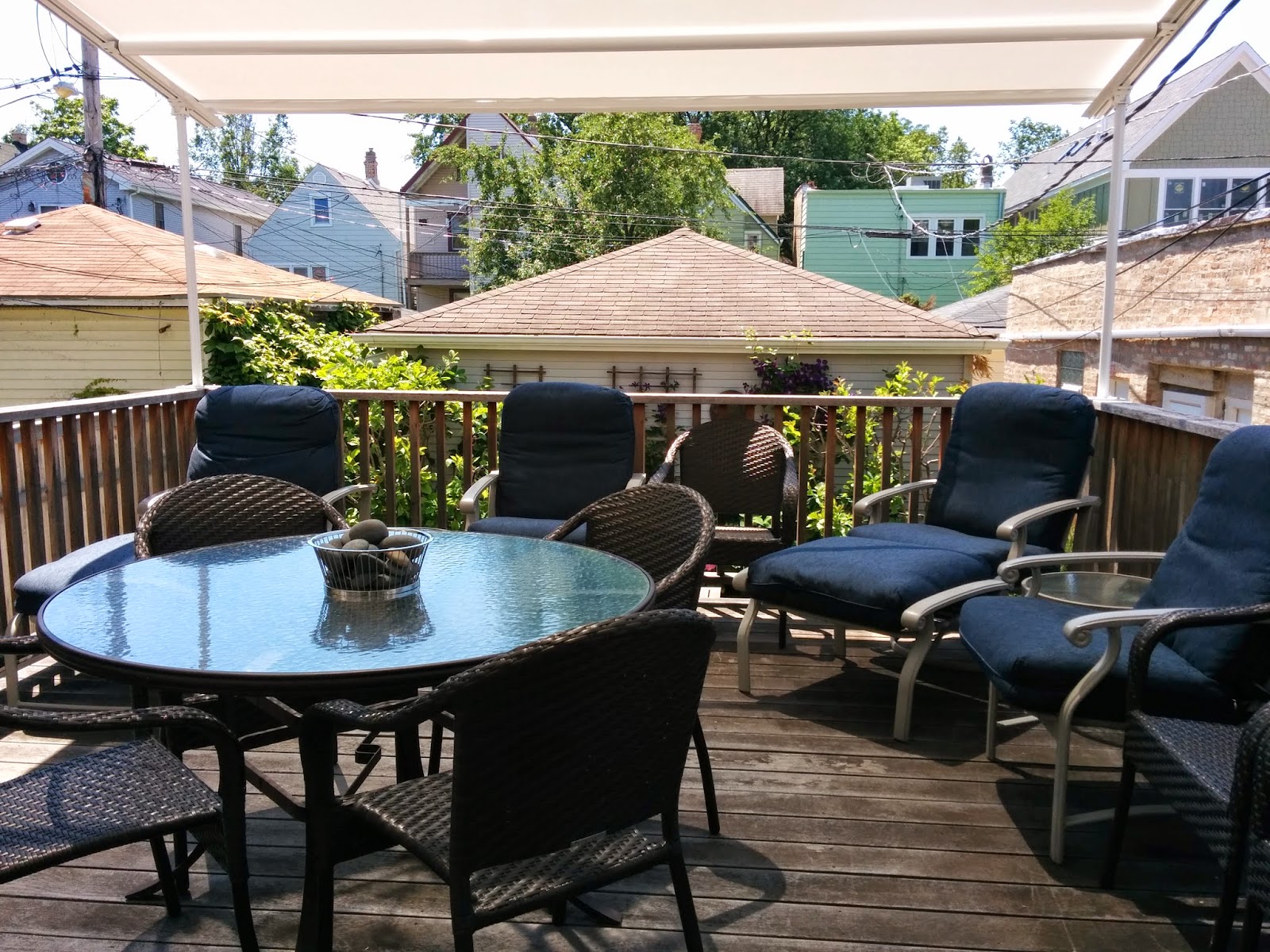 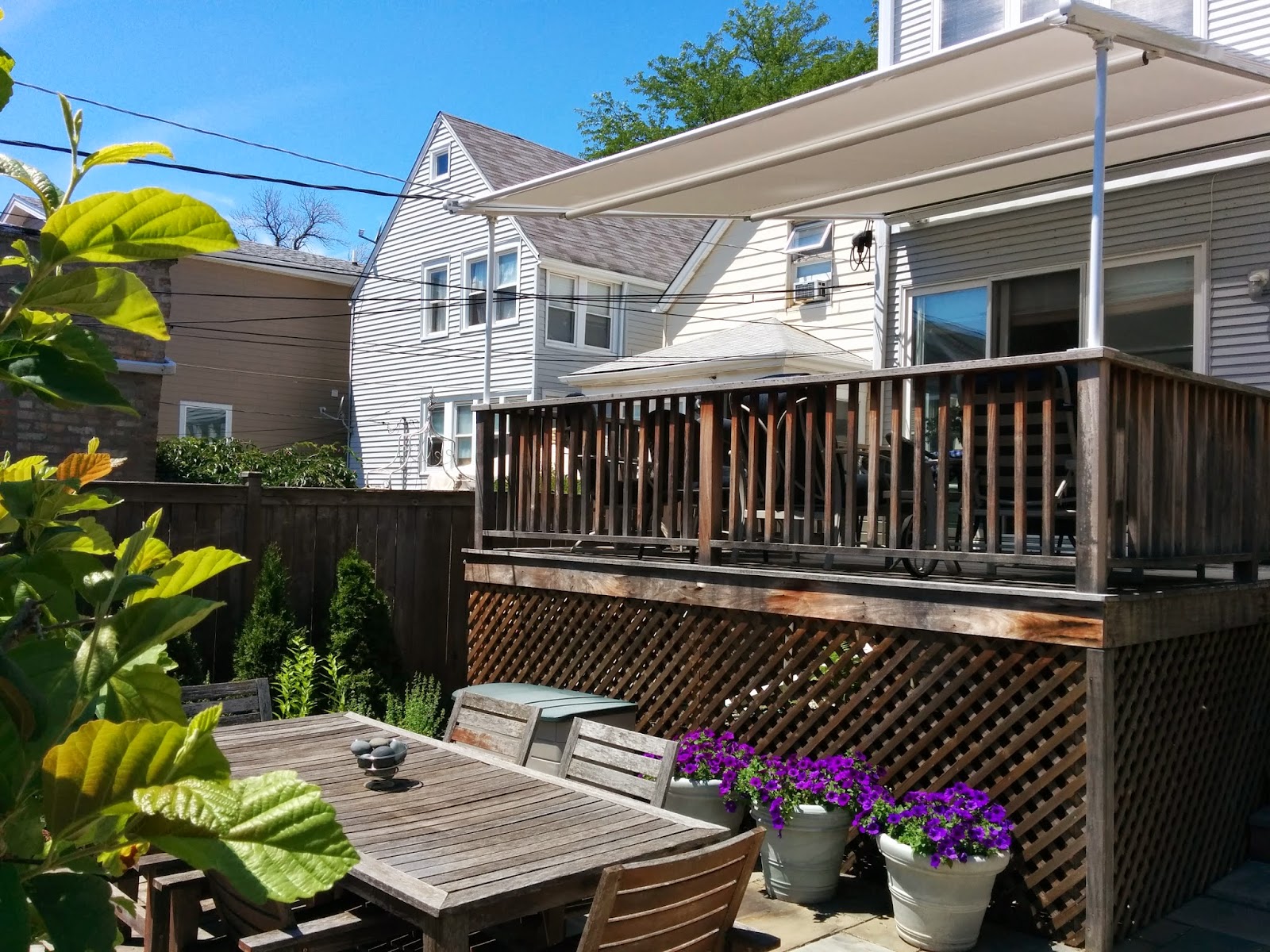 now on with the saga-

On April 22 I called Chesterfield Awning Company to come measure for installation for a new awning to replace my old Chesterfield Awning which had been taken down last fall due to a broken extension mechanism.  The receptionist was very nice (and continued to be throughout the whole ordeal) and said she would have the salesman call me to set up an appointment.

A bit of background- the retractable canvas awning we were replacing after ten years had been made by Chesterfield and we have two other awnings that were fabricated by them.  I didn't even think about calling anyone else because we had been so happy over the years with our prior purchases and even recommended them to neighbors who, like us, have south facing decks with outrageous heat and sun in the summer.  We literally couldn't use our deck in the daytime without our awning.

The salesman Ed Ritzema called and set up an appointment on April 24th- as I asked him to get here as soon as possible because of the deck not being usable until we had the new awning installed.  He showed up on the 24th carting sample books and I was ready to go- I picked out a style and then (this is the “had I but known” part of the story) he balked at taking my deposit saying that this awning came only in restricted fabrics and he would have to check with his “production guys” to make sure he had the right fabric choices for me and therefore the right pricing.  He told me he would get back to me early the next week and set up something for me to pick from the appropriate fabric choices.

I told him I knew that things took time for production so I wanted to order this before I left for a vacation out of the country.  The next week came and I didn't hear from him on Monday or Tuesday and given the time frame I was working with I was concerned so I called and got what I would term the bum’s rush until I got a bit huffy him reminding him that he had told me HE WOULD CALL ME. By this point we were already in the second week of the “ordering process” (as it became).  He said he still hadn't had a chance to get with “the guys” because he was sooo busy (and oh by the way had taken a few days off)

I had his cell phone number, so I started texting him and he finally committed to coming again with the fabrics and to “LET ME ORDER”  a new awning.  He came the second time for the “fitting” and a $4500+ deposit on my order on May 6th – he assured me I didn't need to be all worried about the production time because this particular awning wasn’t made in house and the place they ordered them from was “really fast turnaround” a week or so from when the order was placed.

So I left the country thinking my order was placed on 5/6/14 upon my one half deposit of 4550 and I would have merely to set up an installation appointment when I returned- I was SOOOOOO WRONG!

When I returned on 5/27, I called immediately to 1.confirm my awning had been ordered and 2. Set up an installation date…. And I mean immediately – the afternoon I got off my flight from France I was on the phone- (remember the south facing deck is completely day time unusable without shade)

And gee- Ed Ritzema tells me – no it hasn’t been ordered (NOW THREE WEEKS after my deposit and my understanding that I had ordered an awning) THREE WEEKS (delayed THREE WEEKS ALREADY)  so needless to say I was angry.  Ed Ritzema tells me he needs to do some more measuring- --seriously?
Why hadn't he called me for more measuring in the nine days in between the 6th of May when he took my 4550 and the 15th of May when I left the country for ten days (somehow he might have been able to squeeze in the additional measuring in those nine days – but NO he waited until I CALLED HIM (again) and told me it hadn't been ordered…. I again expressed my concern about the timing and was again assured that “these folks are quick” –

So ON May 28th Ed Ritzema comes AGAIN to measure the deck with two other guys (Jeff & Tom, both very nice) but really – we are now at appointment THREE –one month and four days after the first appointment - and they still have yet to order an awning – and if you have been keeping track we are now only one day short of FIVE WEEKS since the day I wanted to order and awning and pay for it on 4/24!

Can you see steam coming from my ears?  He assures me again that this will be ordered by the end of the week and shouldn't take much more than a week for the company who makes them to get it to Chesterfield and therefore he would still be in his 6 weeks (Quoted on the 5/6 order form – IN WRITING) If you have a calendar in front of you – then you know the end of the week is actually 5/30.

Six weeks from the 6th of May (a Tuesday) is June 17th (June 18th begins week seven) So because my trust level in Ed Ritzema has plummeted to single digit numbers, I text him on Monday June 2nd to inquire if the order had been placed like he said it would be LAST WEEK…..I hear nothing from him until a VM message of 6/4 where he tells me the order was placed the day before!

By now you won’t be surprised to hear that it hadn’t been placed as Ed Ritzema had promised – I reminded him that despite his last assertion that he would meet the six weeks from 5/6 (which he claimed was the week of the 23rd but I pointed out to him was actually June 17th ) it wasn't looking too promising, since we still at June 2nd didn’t have a verified order despite them having my $4550 from 5/6/14 onward and my repeated calls attempting to light a fire under Ed Ritzema…

I called the shop when he stopped answering my texts (and yes I was getting testy about the whole thing) because I knew in April there would be production time delay and that is why I wanted to order it on the FIRST APPOINTMENT for measuring on APRIL 24TH!!!!!

I have to admit I finally TOTALLY LOST IT when he said it would be another week (well actually he didn't really say that, he said he would make an appointment for July 1 but he didn't say it would actually be completed July 1) I was beside myself – I have a large outdoor party planned for 4PM for the 4th of July and I had repeatedly told Ed Ritzema that I absolutely needed the awning before that to which he kept telling me – this company we get these from works fast they ship them to us in just days-

And here is what I have to say about that – ED RITZEMA is a LIAR! No actually he is an incompetent LIAR   Three appointments and three guys to measure a deck??????

Later on June 24th I hear from Dave (who says he is the owner) and who gives me a lot of apologies and excuses about the delay at the company in Germany but I point out to him- that had this been ordered in a timely manner a bit of a delay on the production side would have made NO difference at all- this was an Ed Ritzema competency problem.  I suggested that perhaps he could have Ed pay for the second half of my awning thinking that might teach him a lesson about customer service and efficiency but he balked and told me he would be sued.  Then he said “I should probably fire him” and I laughed and told him he SHOULD but that I knew he wasn’t going to because the guy has been there twenty years (maybe he just getting too old to for the job and that is why he had to come out THREE TIMES to measure for one awning) – The owner and I ended the conversation with him saying he would call back on the 25th with more answers about the time frame.  Which he did - but only with more bad news and he called again pretty much every business day from the time with apologies and sad tales of woe.  Very nice man but clearly he has an employee problem he is not dealing with.

By June 30th - we are now MORE THAN TWO MONTHS since I had my first appointment where I attempted to buy an awning from this company- I still didn't have an awning and I had no clue when I might actually get an awning – I had wasted far too much time to just cancel and start over with another company and they had my one half deposit – for the last seven weeks!

I asked Dave, should I pray for rain on the fourth? Thereby having an excuse to keep my guests indoors when they arrive mid-afternoon for the “outdoor” party on a south facing deck that gets in triple digit temperatures in the sun?  Finally on July 1st Dave calls and tells me they will be there tomorrow for the installation- but just so I know up front part of the awning didn't get shipped and therefore they would need to come back for a second installation date to replace the jerry-rigged parts with the real ones when they came in... he I am sure wasn't thrilled to tell me that but he did- because unlike Ed Ritzema he is honest about the situation.

so yesterday my awning was installed by four great guys from Chesterfield Awning (none of them being Ed Ritzema) and we have shade today - on July 3rd...TEN WEEKS after I first had the appointment where I wanted to order and awning and more than eight weeks after I put down my deposit and got a 6 weeks delivery date IN WRITING...

this morning I texted Dave and thanked him for his perseverance and asked about when the job might be fully completed- so this is not the end of the story....

Thank God for social media because I can warn other potential customers to avoid dealing with Ed Ritzema like the plague… my yelp reviews and Angie’s list reviews, blog, and any other place I can think of to tell people how Ed Ritzema is a liar-  and right about now I am thinking the BBB might also have a forum available to me… we'll see...
Posted by TOR at 1:00 PM