So after lunch we headed back to Soudan for the tour of the High Energy Physics Lab located in the abandoned mine on level 27 (the deepest one) - and here is what we learned - buckle up - this one is BIG! 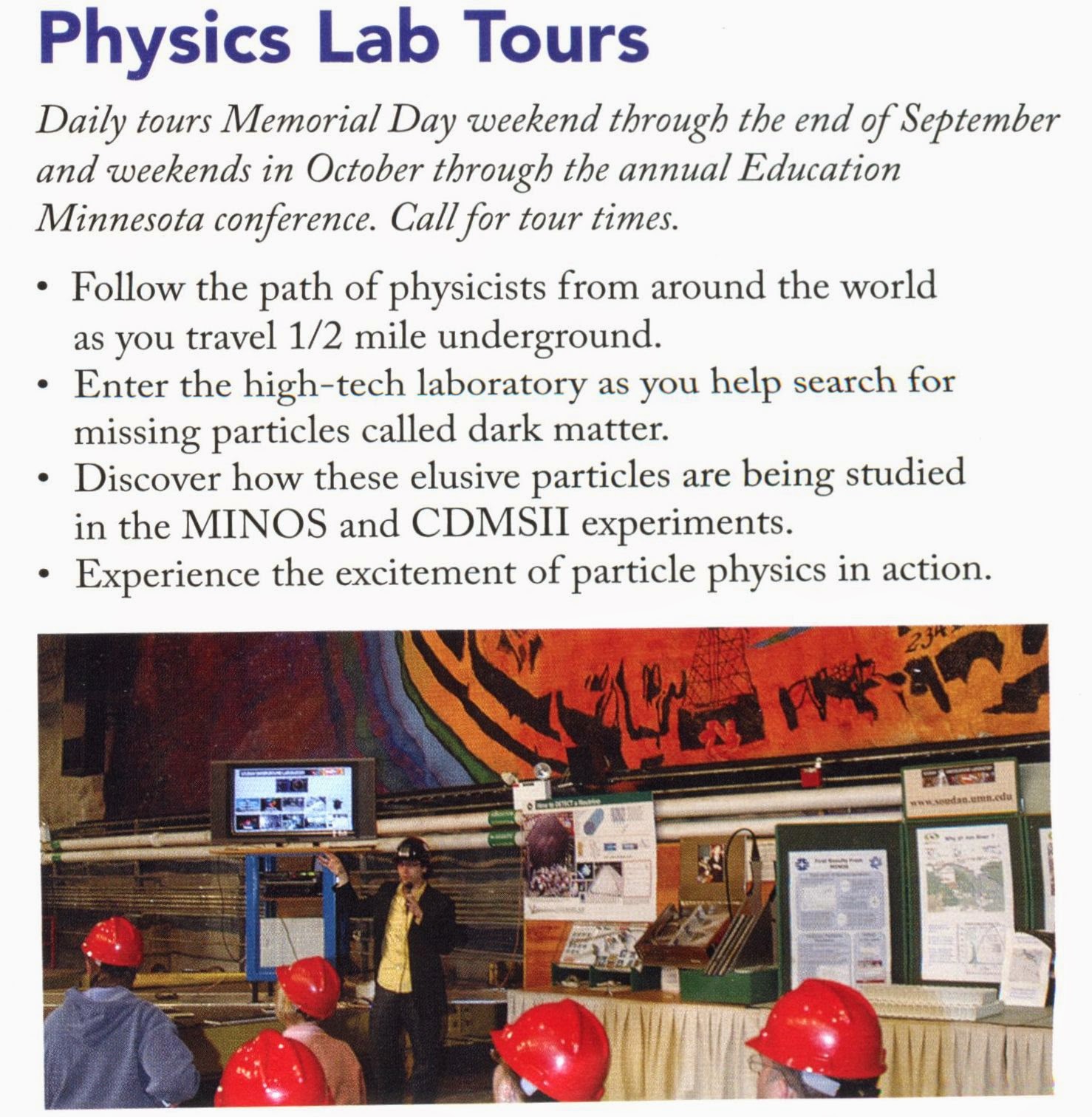 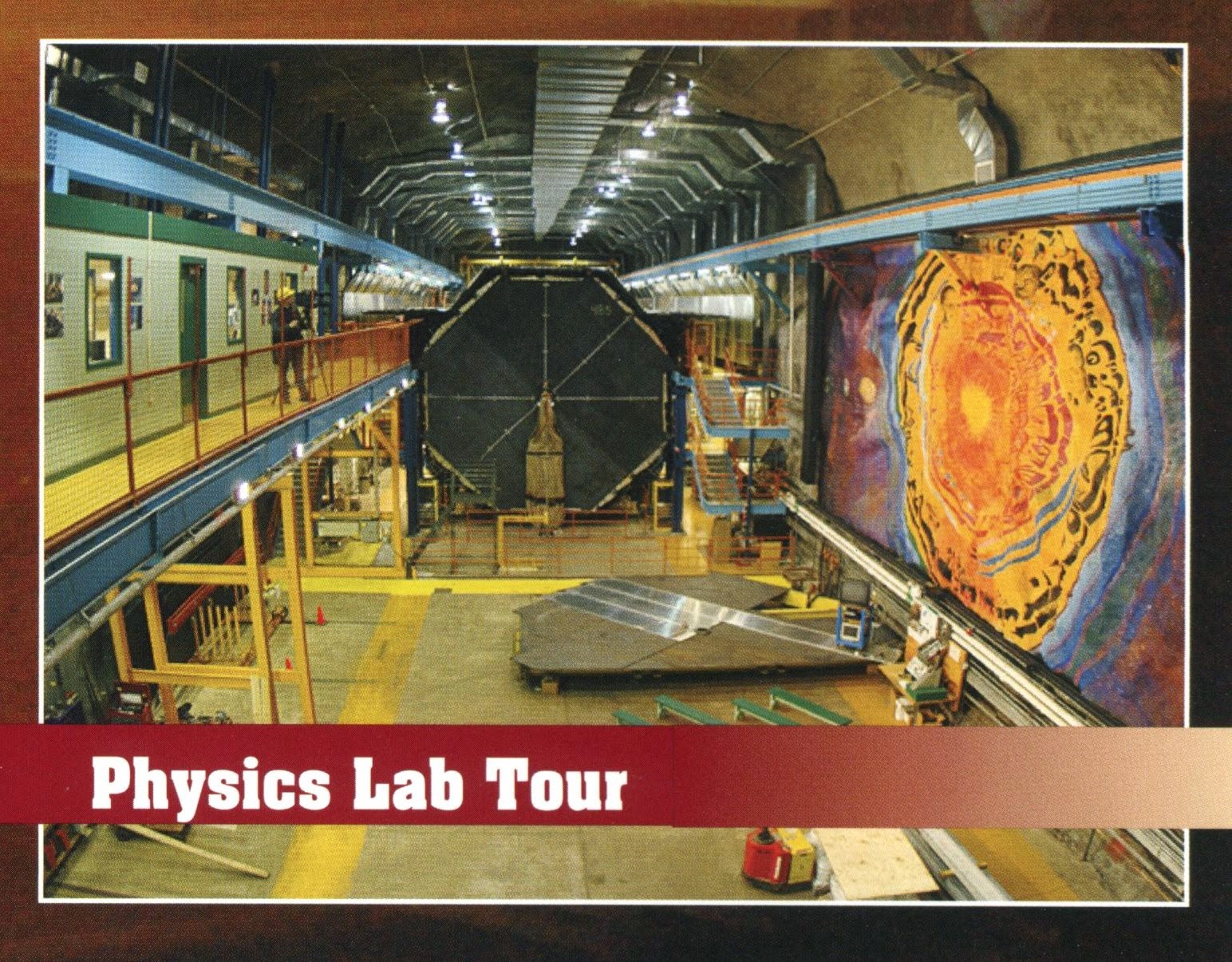 just like before we take the elevator down to level 27 but this time there is no train... we walk in through the gate and are outside very large double doors that guard the facility... we have a brief lecture there and get a short overview of the background on how the lab came to be built here... think deep underground away from extraneous cosmic rays that might alter the results of experiments tracking particles so difficult to detect that you can only see them by reference to their collisions with atomic nuclei. I did not truly grasp all the guide explained to us - but the small part I did understand changed my world-view in a nanosecond! 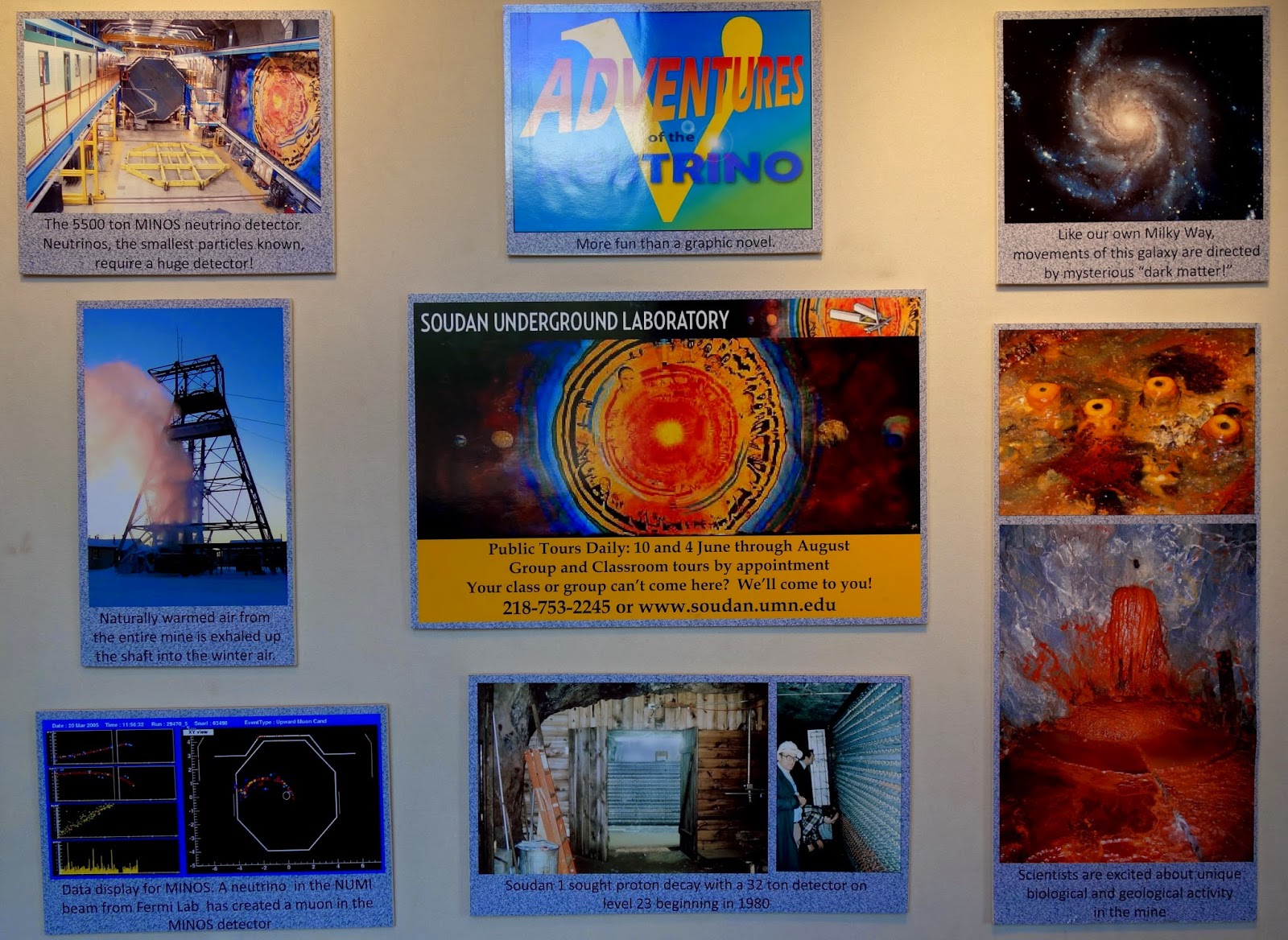 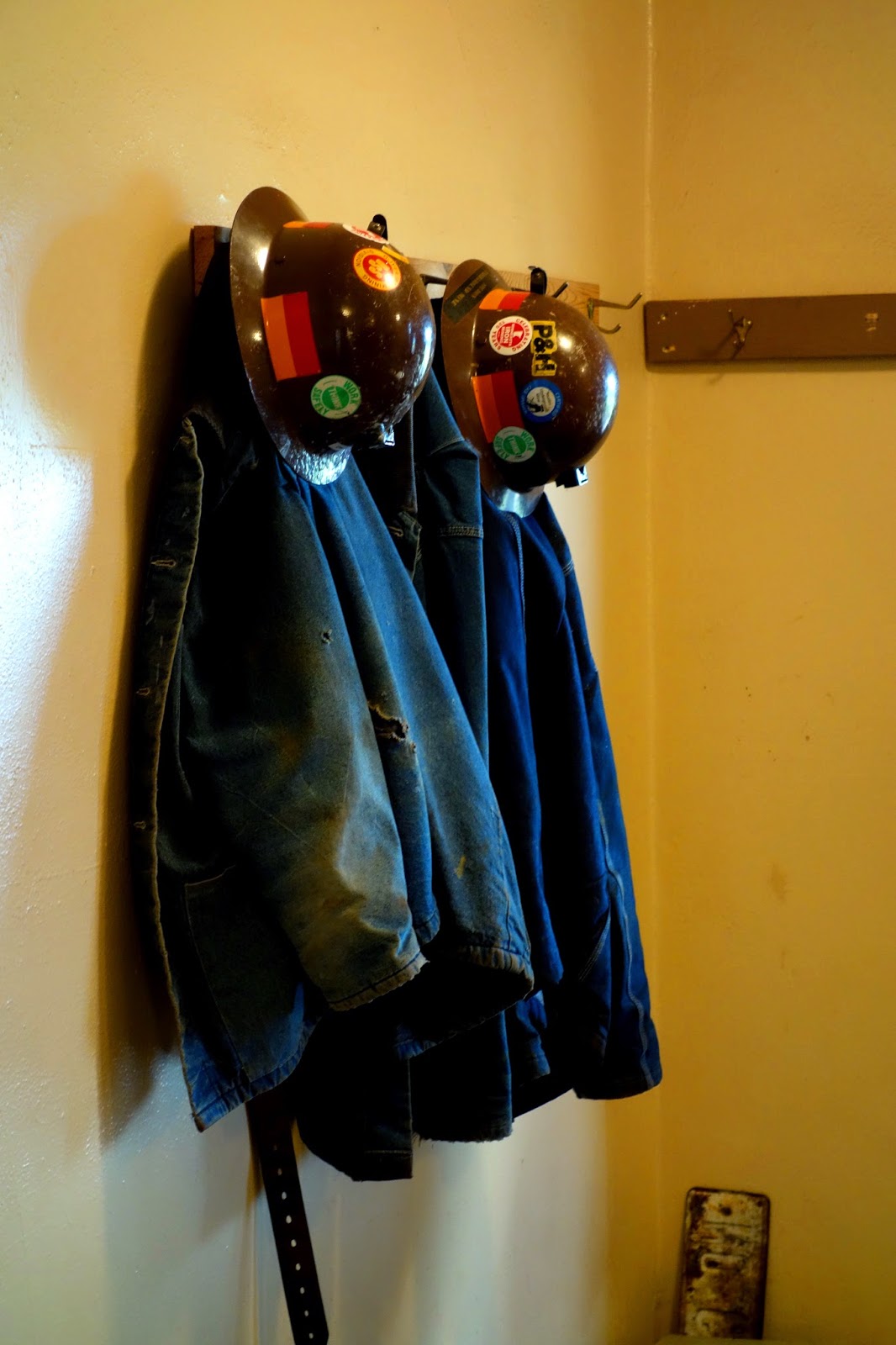 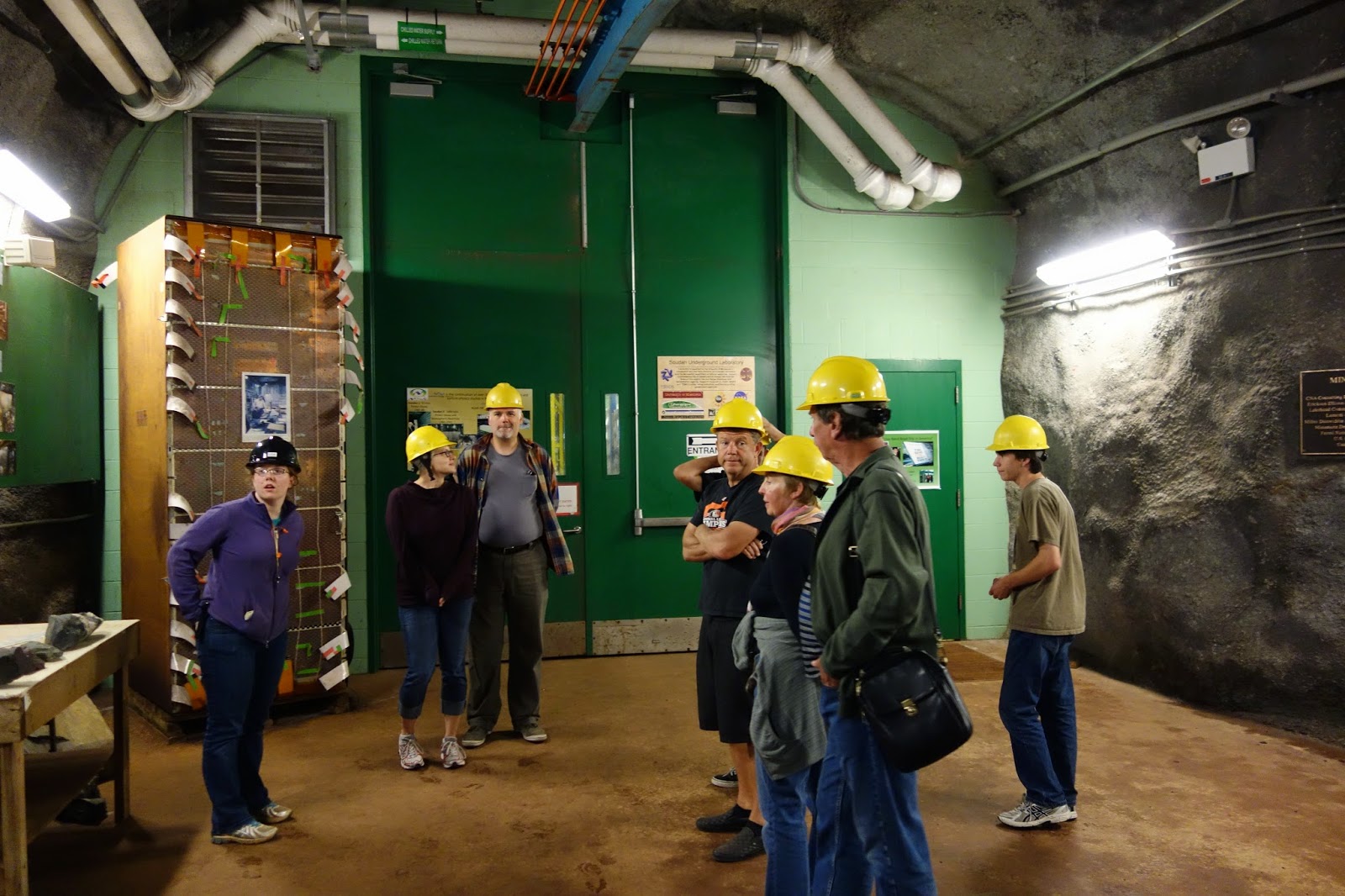 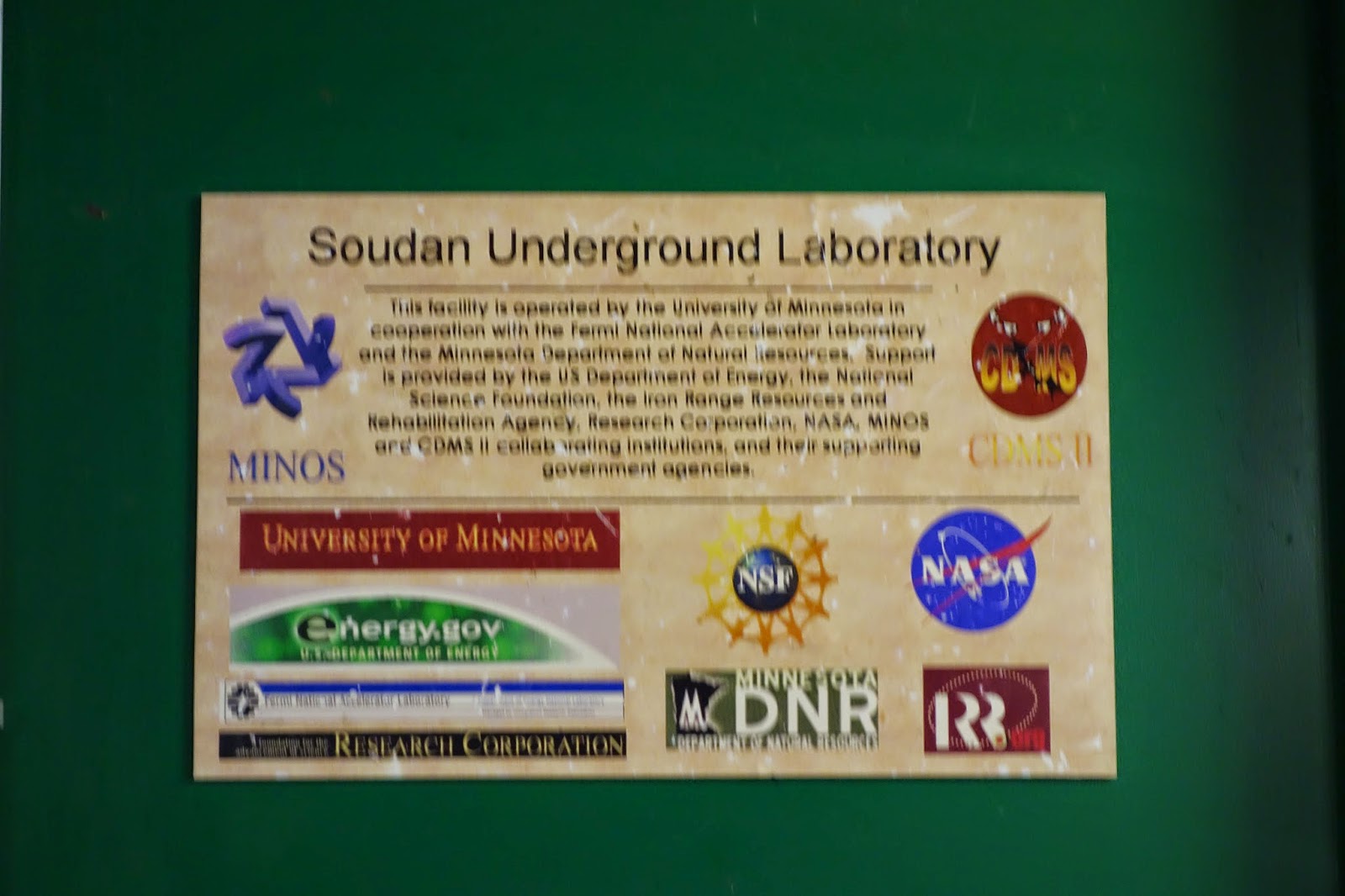 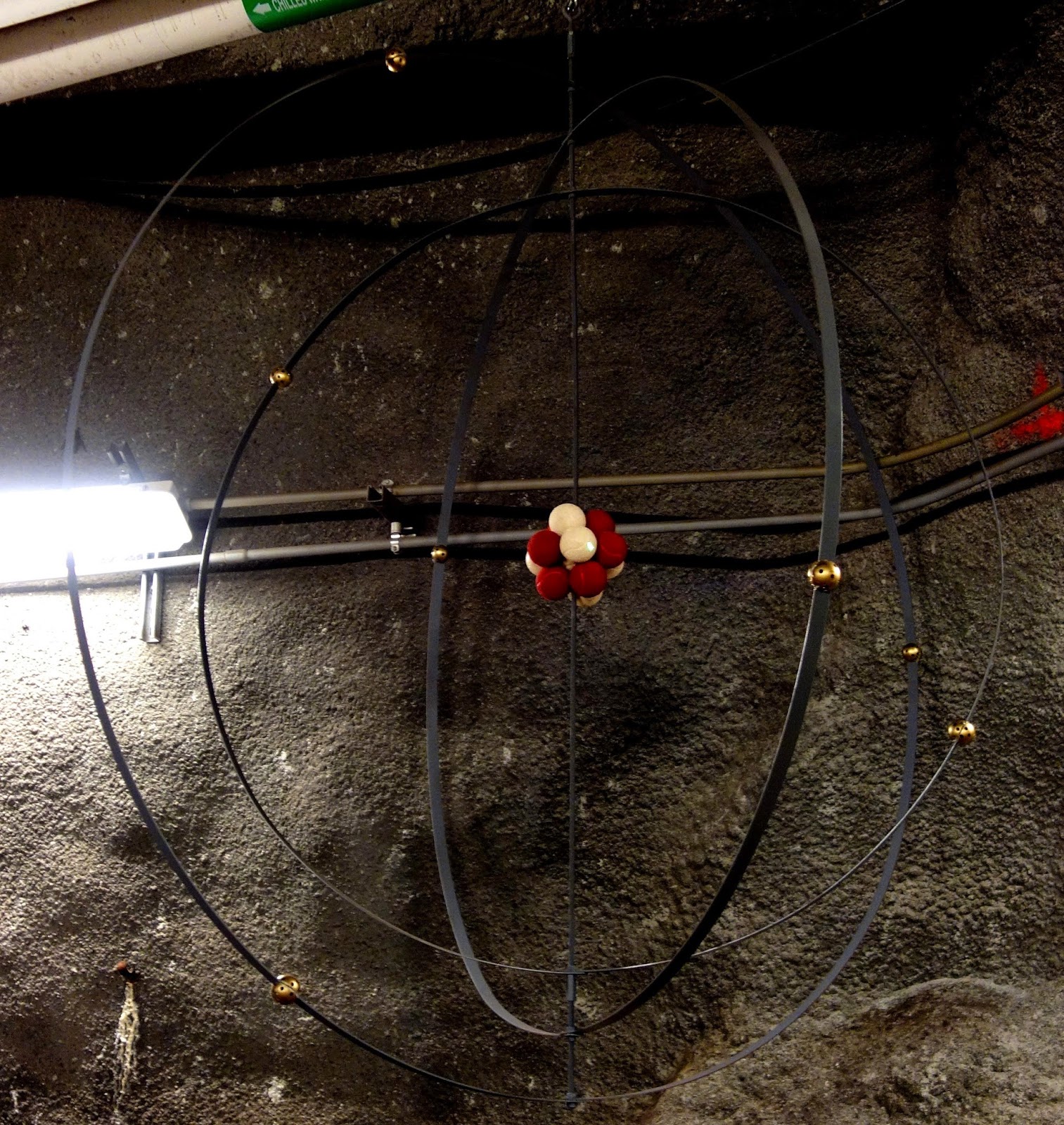 What experiments are conducted in the lab?
There are two major experiments in the lab now: CDMS and MINOS. A third experiment, Proton Decay, has been put on hold.

What is CDMS?
CDMS stands for Cryogenic Dark Matter Search. This experiment's purpose is to directly detect dark matter particles other than neutrinos.

What is MINOS?
MINOS stands for Main Injector Neutrino Oscillation Search. The experiment's purpose is to measure the mass of particles called neutrinos, which are smaller than the nuclei of atoms.

Modern particle physics research is focused on subatomic particles, including atomic constituents such as electrons, protons, and neutrons (protons and neutrons are composite particles called baryons, made of quarks), produced by radioactive and scattering processes, such as photons, neutrinos, and muons, as well as a wide range of exotic particles. Dynamics of particles is also governed by quantum mechanics; they exhibit wave–particle duality, displaying particle-like behavior under certain experimental conditions and wave-like behavior in others. Following the convention of particle physicists, the term elementary particles is applied to those particles that are, according to current understanding, presumed to be indivisible and not composed of other particles. (wikipedia) 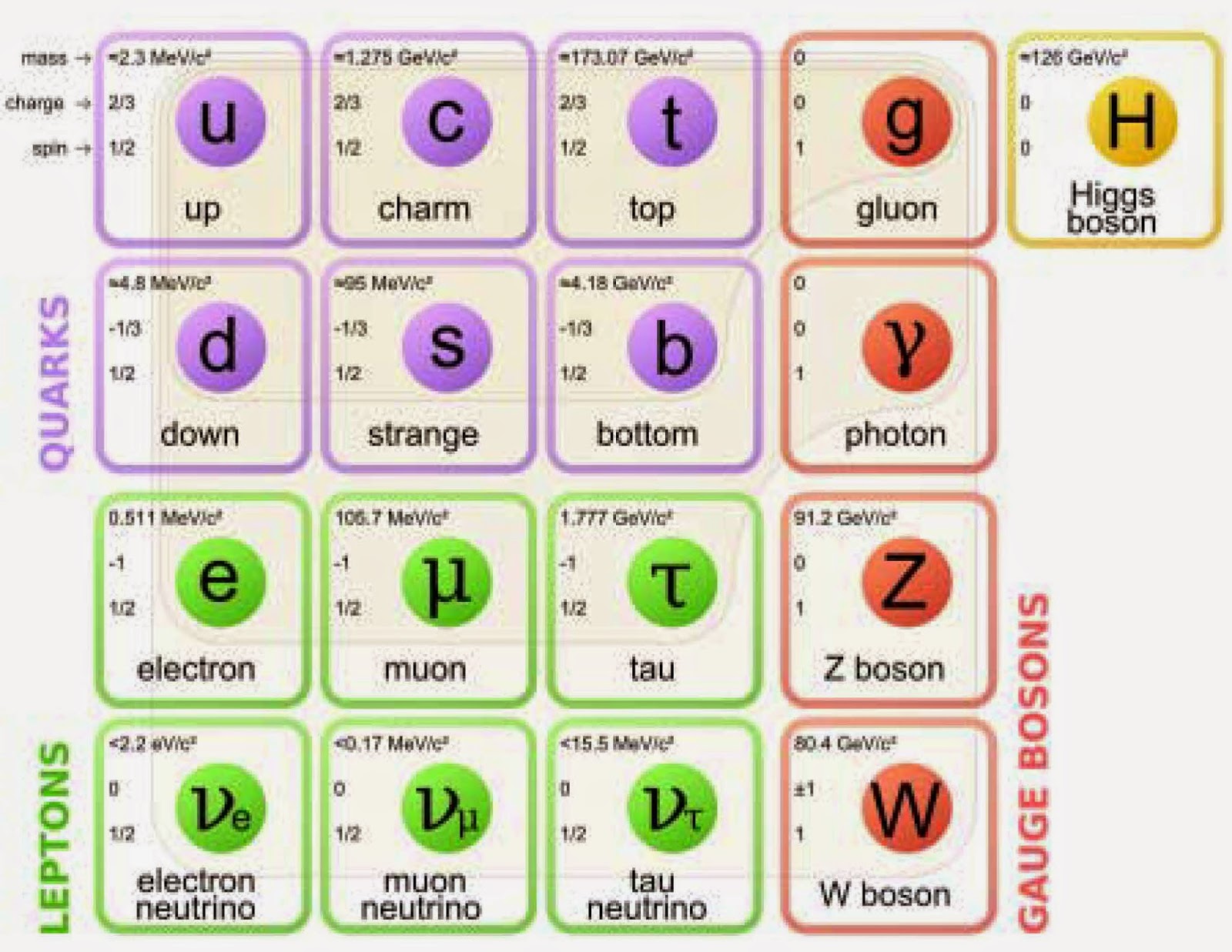 A neutrino is an electrically neutral, weakly interacting elementary subatomic particle. The neutrino (meaning "little neutral one" in Italian) is denoted by the Greek letter ν (nu). All evidence suggests that neutrinos have mass but the upper bounds established for their mass are tiny even by the standards of subatomic particles.
Neutrinos do not carry electric charge, which means that they are not affected by the electromagnetic forces that act on charged particles such as electrons and protons. Therefore a typical neutrino passes through normal matter unimpeded.

Important concept in red above!

Neutrinos are created as a result of certain types of radioactive decay, or nuclear reactions such as those that take place in the Sun, in nuclear reactors, or when cosmic rays hit atoms. There are three types, or "flavors", of neutrinos: electron neutrinos, muon neutrinos and tau neutrinos.

Red font above is the "flavor" that they are looking for here! And here is the amazing thing- they come from Chicago - generated through the particle accelerator at Fermilab and are "shot" underground - THROUGH SOLID ROCK to Soudan!

so you are probably thinking you misunderstood that sentence - but you did not...LOL

Remember that atom model I told you to pay attention to above? - well here is the thing- in all atoms there is the nucleus and then electrons which fly around the nucleus- please remember I am a recovering attorney - not a scientist...LOL but - read this carefully - if the nucleus of a given atom (the SOLID ROCK) is the size of a marble then the electrons would be circling that marble roughly TWO MILES away!!!! I don't know about you but I found this information mind boggling! The SOLID rock is mostly empty space - along with every other thing in our world...AAAACCCKKK there is steam coming from our ears by the time we take in this information- 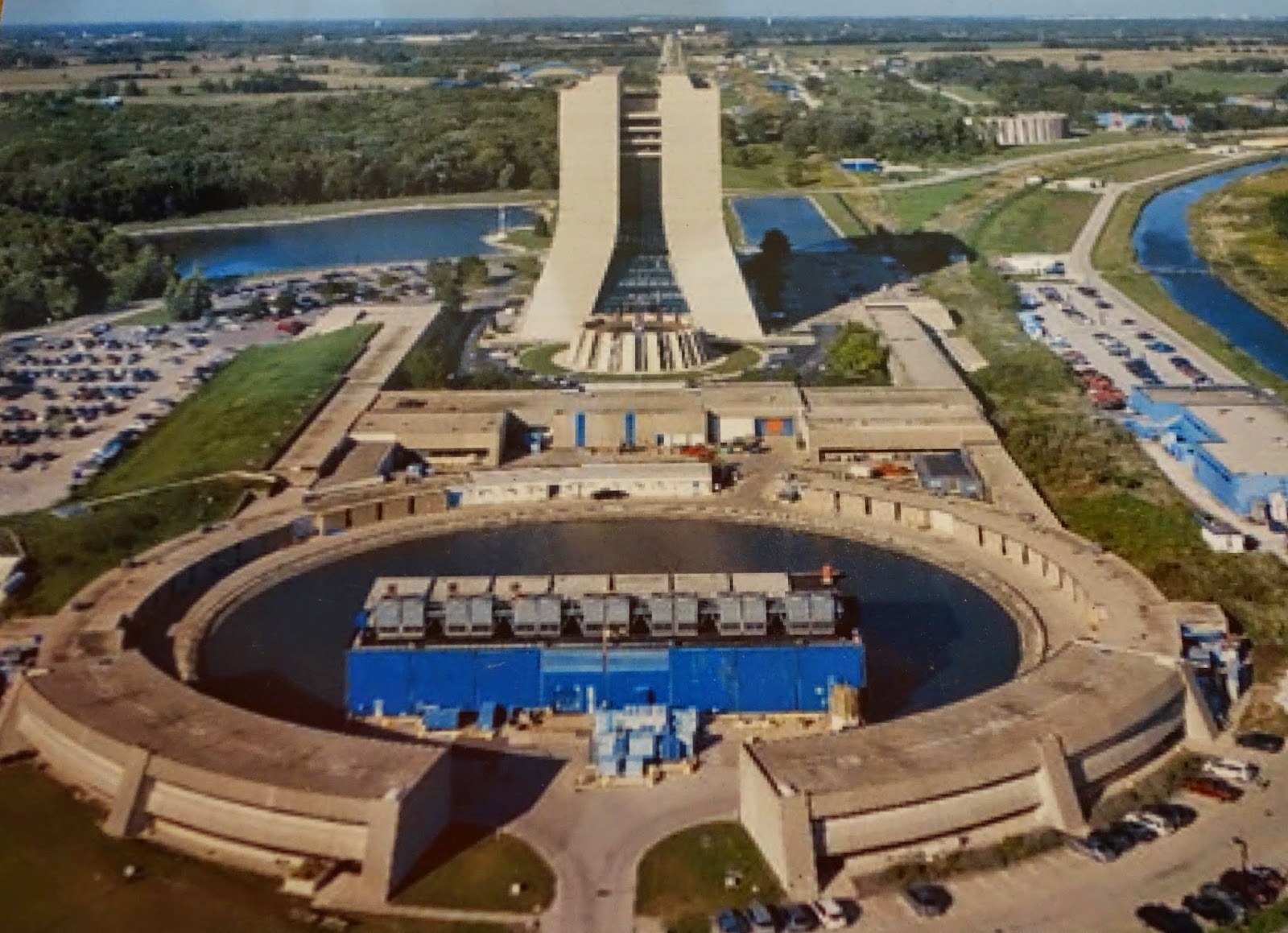 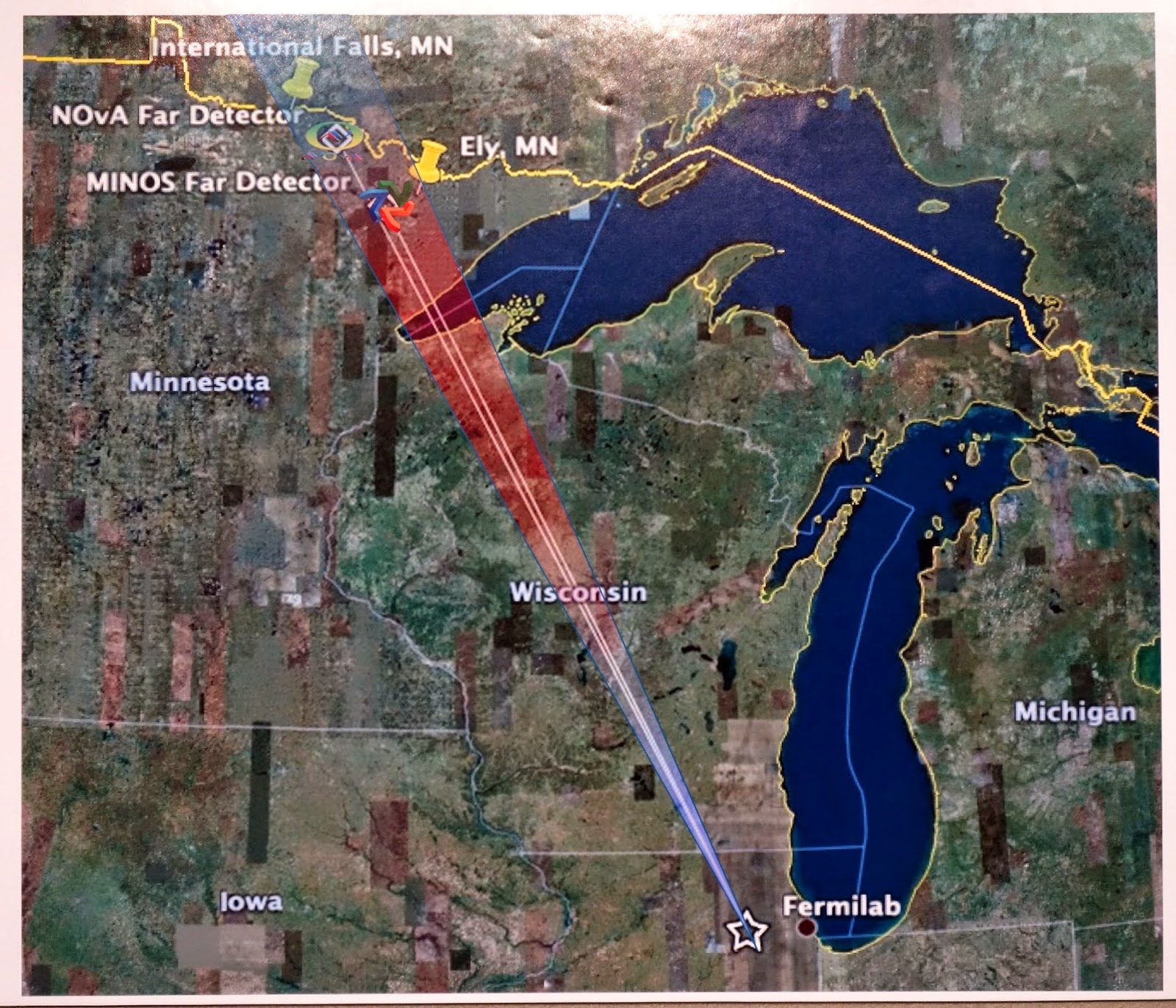 are coming to this device - which can "SEE" them referentially - to be detected when and if they collide with an atomic nucleus and change into MUONS! 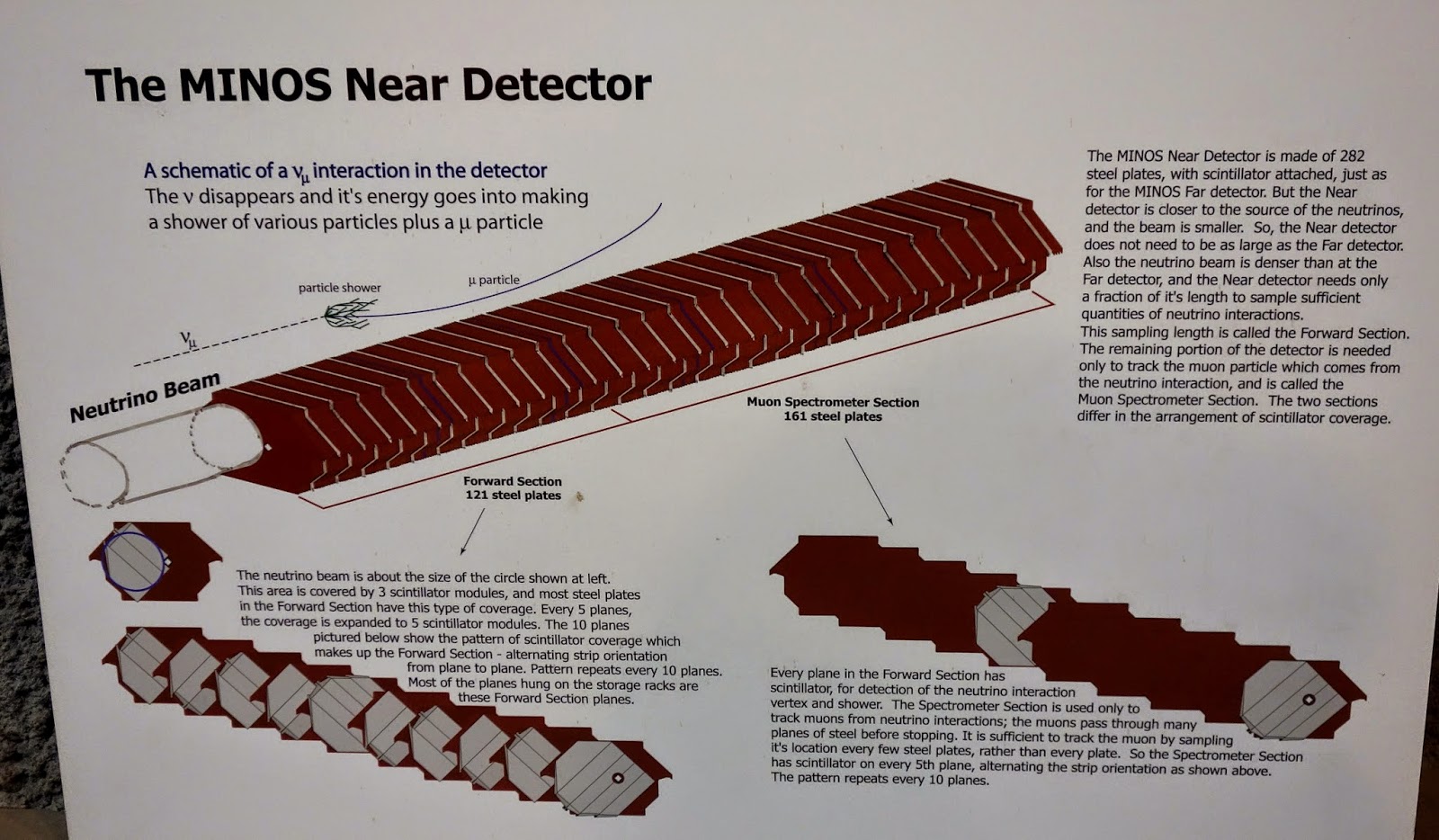 and if you think that was really incredible here's more - Fermilab sends a pulse of gobs (my term) of neutrinos every 2 seconds to Soudan and on any given day they might detect TWO muons in their MINOS detector... tough work finding these little guys!!!

OK - at this point I will stop because if you really have any interest in the subject you probably 1. already know more than I ever will and 2. can look up more information on your own....

The Cryogenic Dark Matter Search (CDMS) is a series of experiments designed directly to detect particle dark matter in the form of WIMPs. Using an array of semiconductor detectors at millikelvin temperatures, CDMS has set the most sensitive limits to date on the interactions of WIMP dark matter with terrestrial materials. The first experiment, CDMSI, was run in a tunnel under the Stanford University campus. The current experiment, SuperCDMS, is located deep underground in the Soudan Mine in northern Minnesota. (wikipedia)

Observations of the large-scale structure of the universe show that matter is aggregated into very large structures that would not have time to have formed under the force of their own self-gravitation. It is generally believed that some form of missing mass is responsible for increasing the gravitational force at these scales, although this mass has not been directly observed.

A number of proposed candidates for the missing mass have been put forward over time.  ...A current candidate are new types of particles known as weakly interacting massive particles, or "WIMP"s. As the name implies, WIMPs interact weakly with normal matter, which explains why they are not easily visible.

Detecting WIMPs thus presents a problem; detecting them will be extremely difficult. Detectors like CDMS and similar experiments measure huge numbers of interactions within their detector volume in order to find the extremely rare WIMP events.CDMS collected WIMP search data has operated (with collaboration from the University of Minnesota) in the Soudan Mine since 2003. A new detector with interleaved electrodes, more mass, and even better background rejection is currently taking data at Soudan, under the name of SuperCDMS 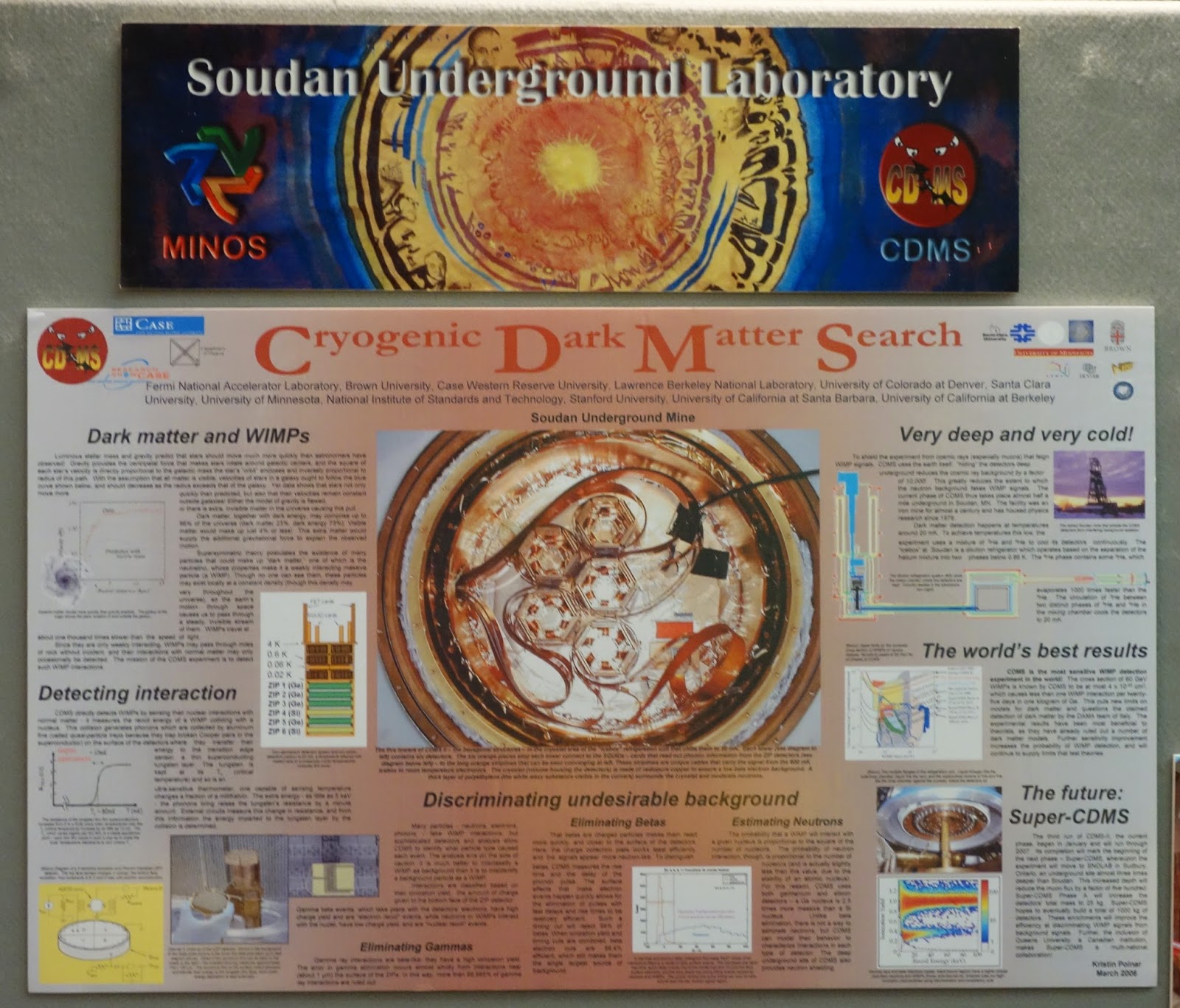 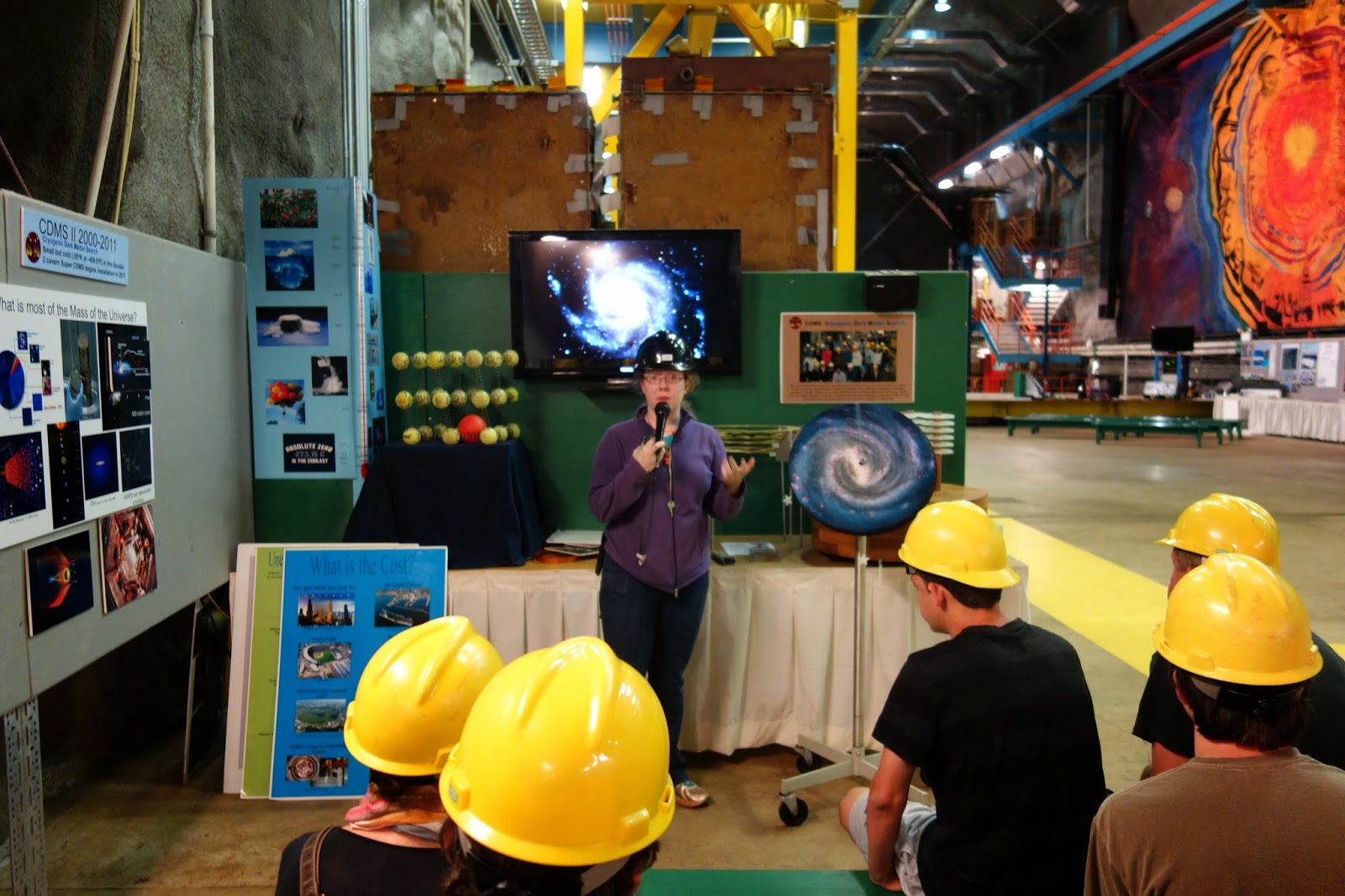 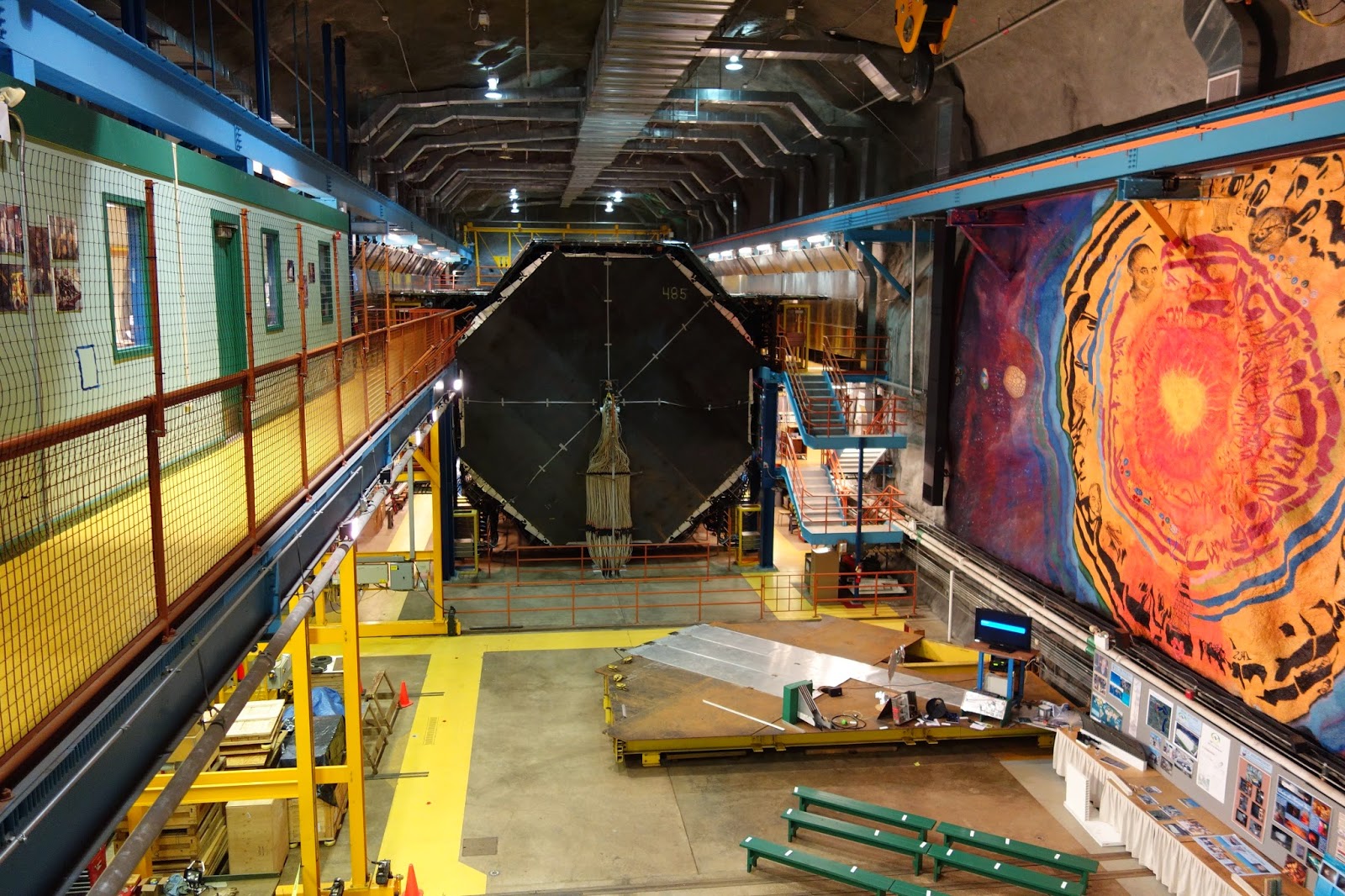 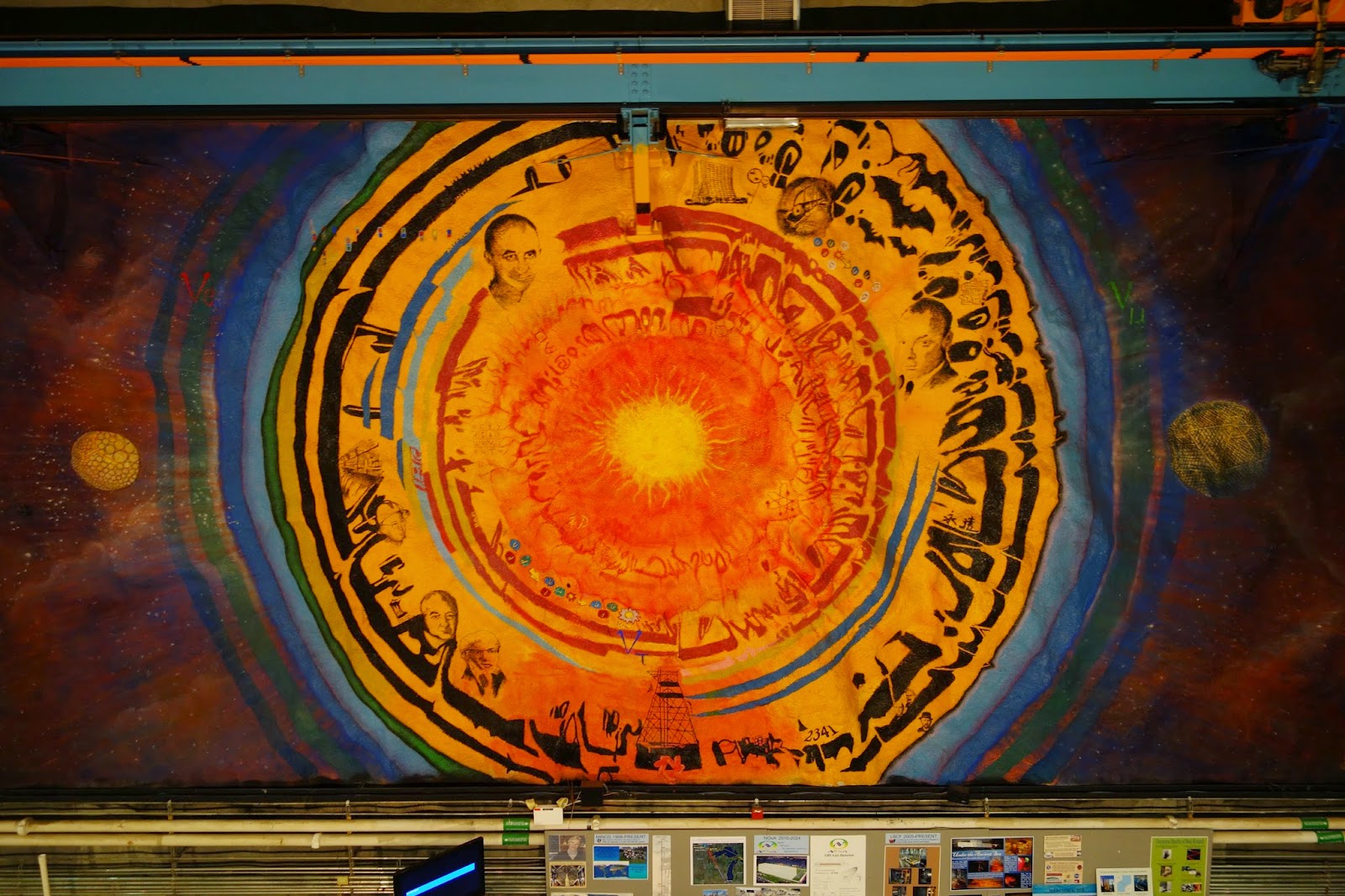 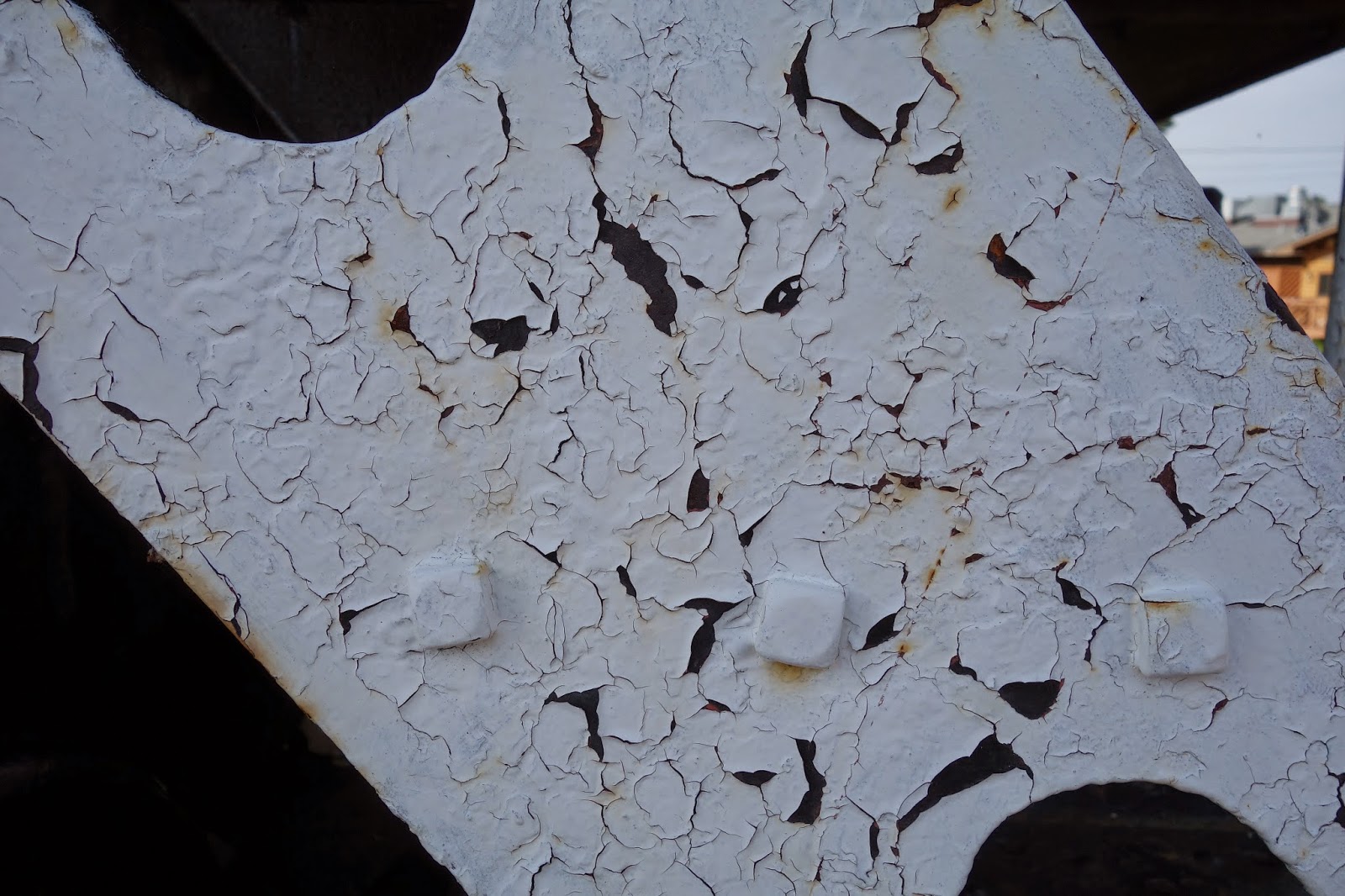 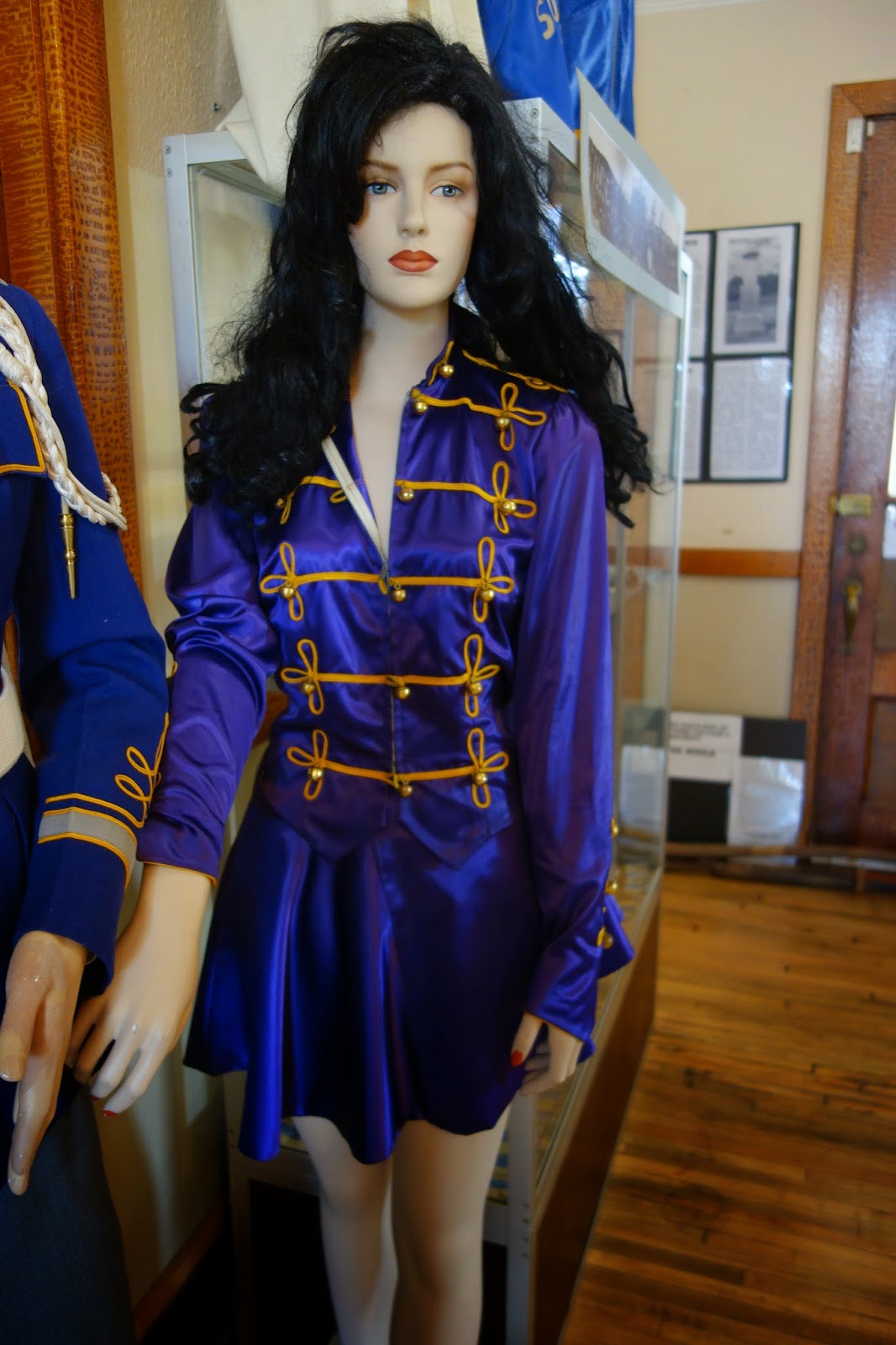 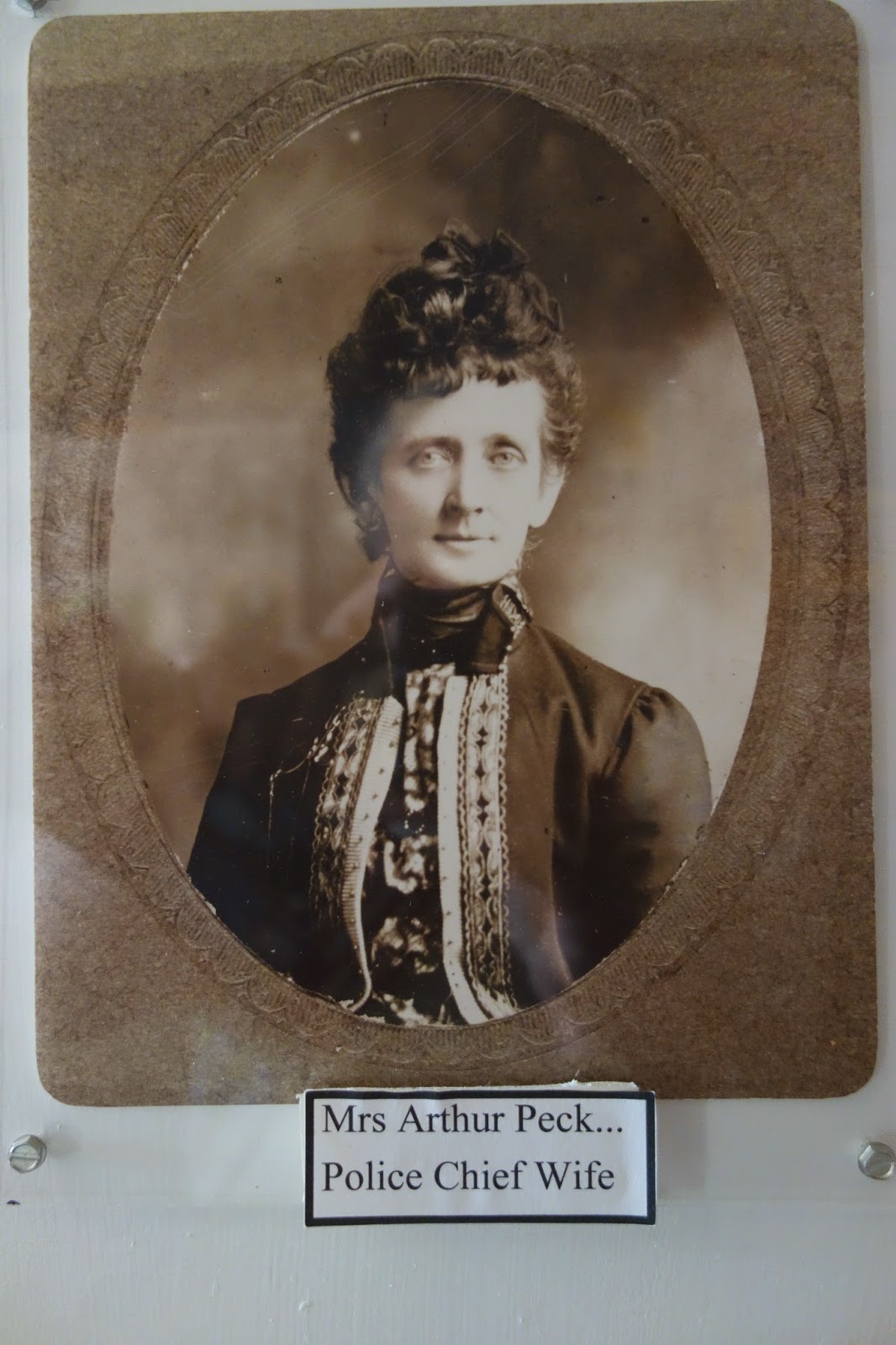 two items that were photogenic enough to bother- 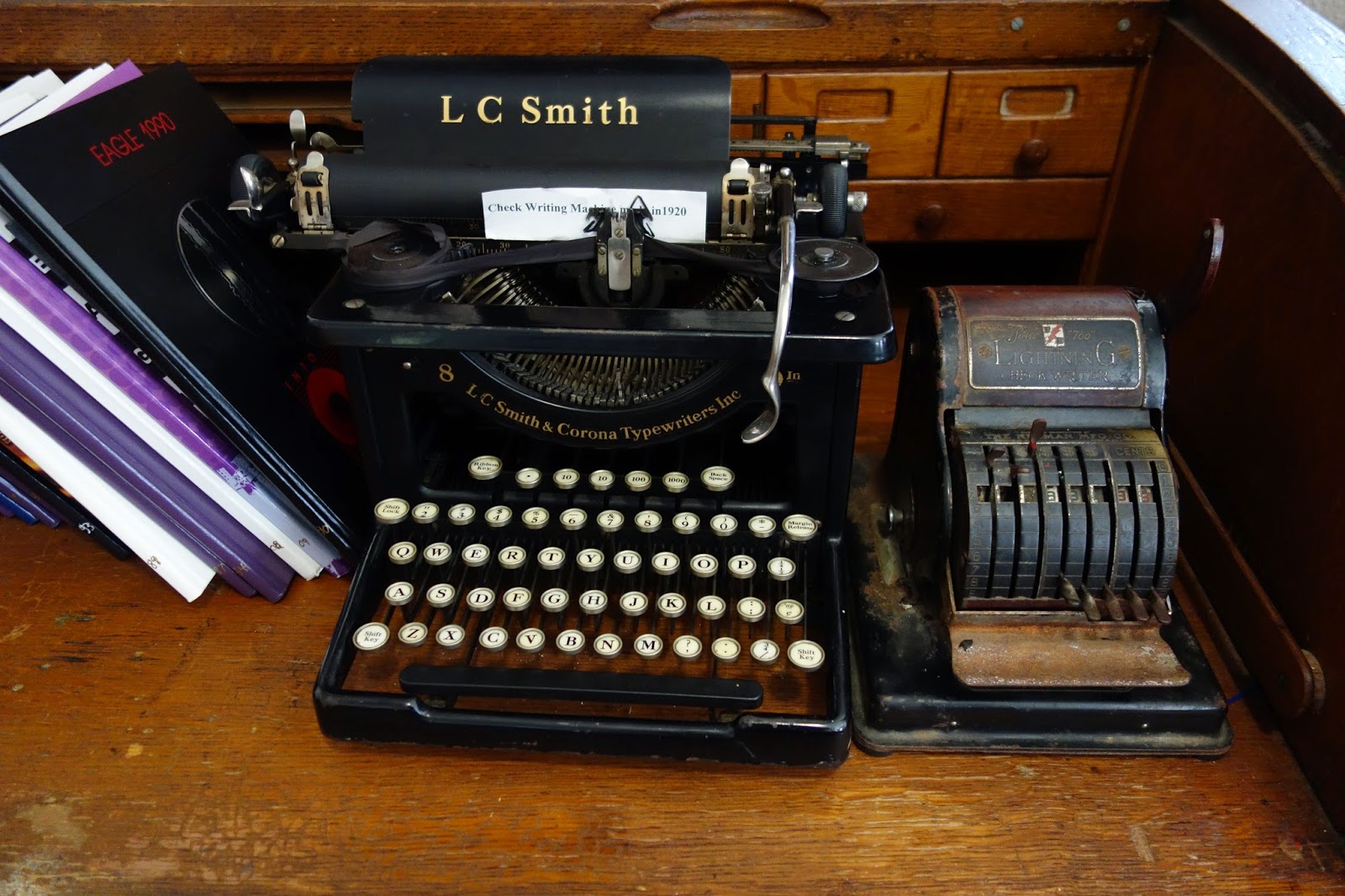 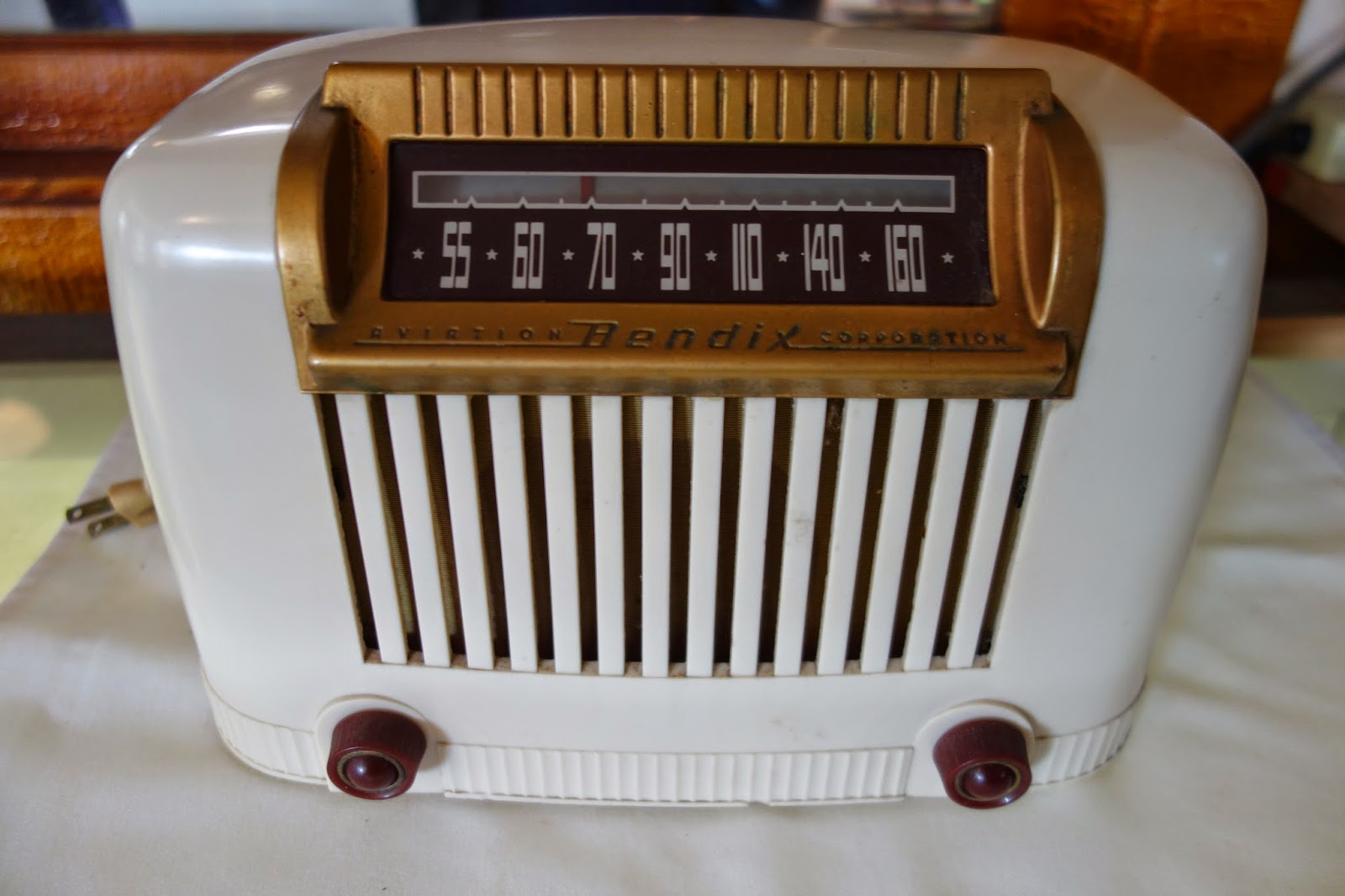 and outside the "memorial" to the coldest day on record - where you can have your photo taken (TB refused to put his head in - but it was kind on kid sized so I forgave him...) 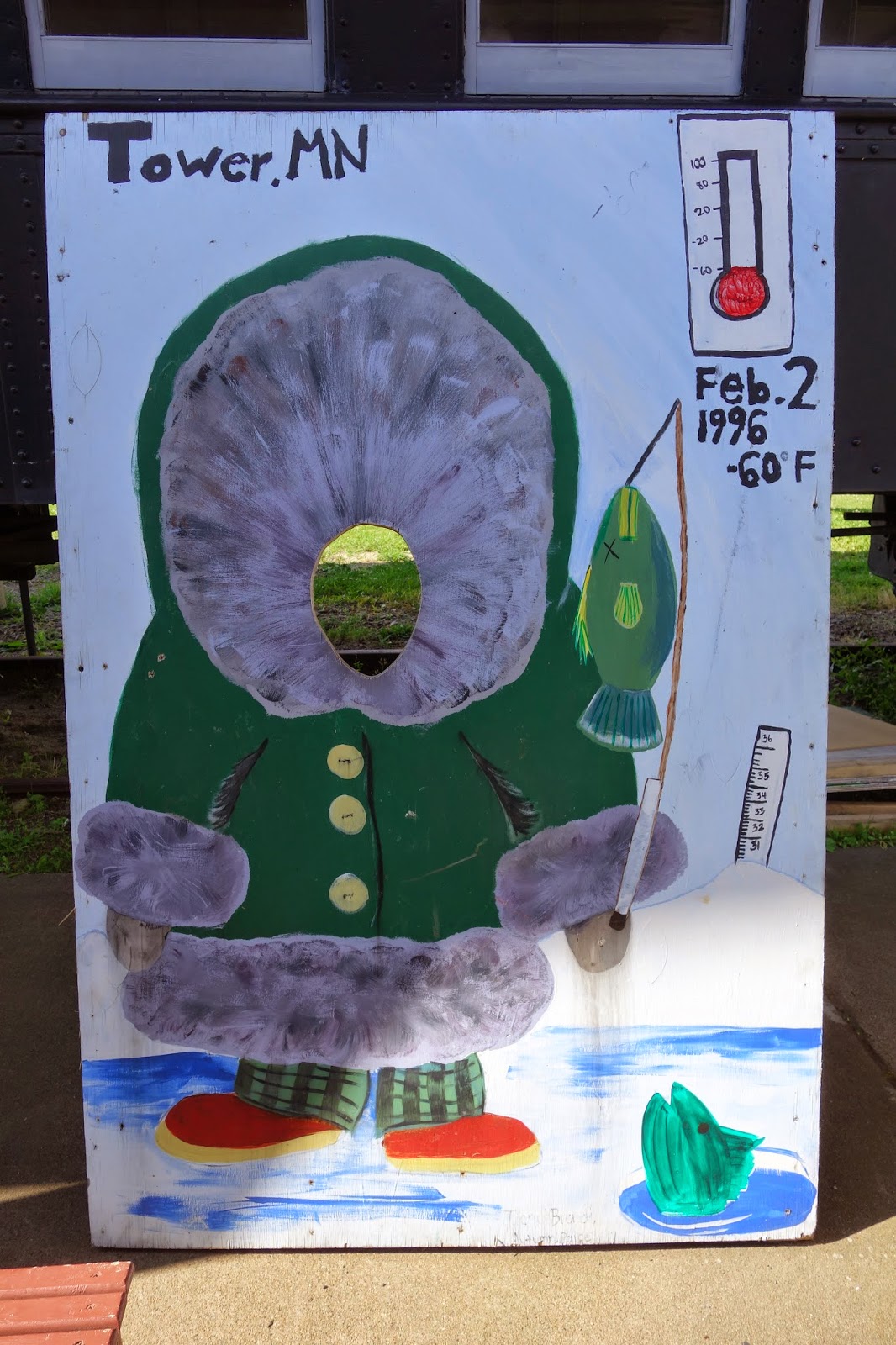 We had a long drive back to Hwy 61 (which now we will be "revisiting" LOL) and our rooms for the night at the Illgen City motel - so we grabbed a bite to eat in Ely and got on the road- amazed at how much empty space there was in our world that wasn't there (to us at least) that morning! 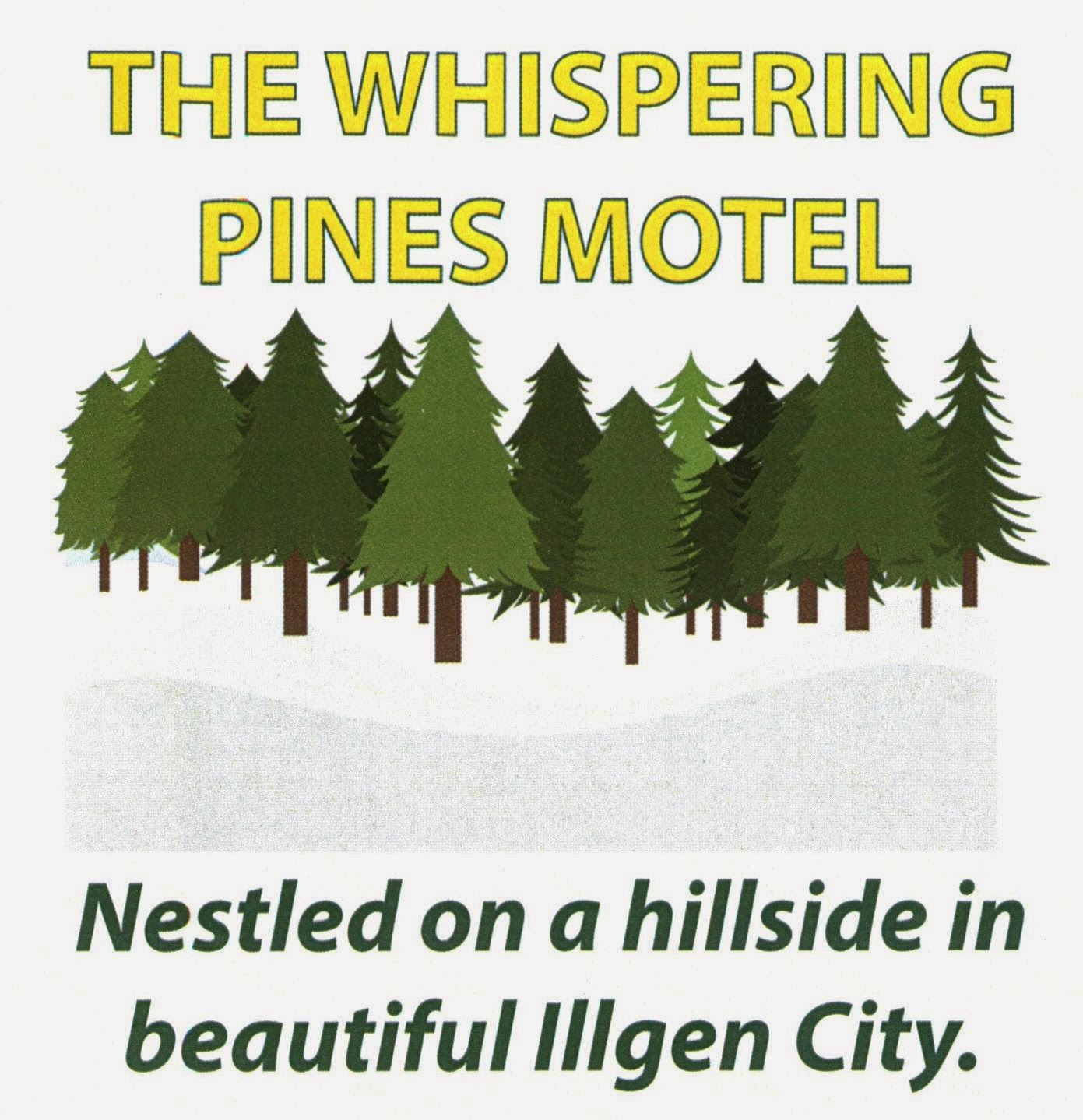 tomorrow morning we are off to the border and then Thunder Bay Ontario... much more to come- so stay tuned!
Posted by TOR at 6:18 PM