My mother died four years ago last Monday... and it is not an understatement to say I miss her every day. My husband tells me she is always with us (it has both overtones of religion and of psychobabble to me.) Yes I know she will always live on in my memories of her and her gene pool which continues in five grandchildren but still - she was such an amazing person that I feel like there is no way the "real" woman can be captured but hey I am just the kind of person who will try anyway- LOL...

My mother was born in 1930 - her parents met in Florida.  Her father had wanderlust and had set out from New Jersey on a tramp steamer for an around the world voyage and landed in Florida early in the journey. He met my grandmother, fell in love and headed north to marry and start a family pretty much immediately - obviously the hormones overtook the wanderlust at this point in his young life.

My mother was born something like ten months into the marriage in January 1930.... and they settled into routine family life. My aunt was born four years later. My grandfather worked for 47 years at the Cincinnati Bell Telephone company.  So far you would find nothing unusual about the story.  My mother was an excellent student but wasn't all that keen on school so she went off to Miami University for a year and decided that she was more interested in making money as she had with her part time job during high school (in retailing).

She returned to Cincinnati from Oxford Ohio (home of Miami University) leaving behind her boyfriend (eventually my father) to finish his senior year and graduate.  He started to work in the Cincinnati area and he proposed marriage in the most "romantic" of ways... he told my mother that they could get married if she found an apartment for $37.50 a month - LOL- that might have been the first time my father underestimated my mother but it certainly wouldn't be the last. 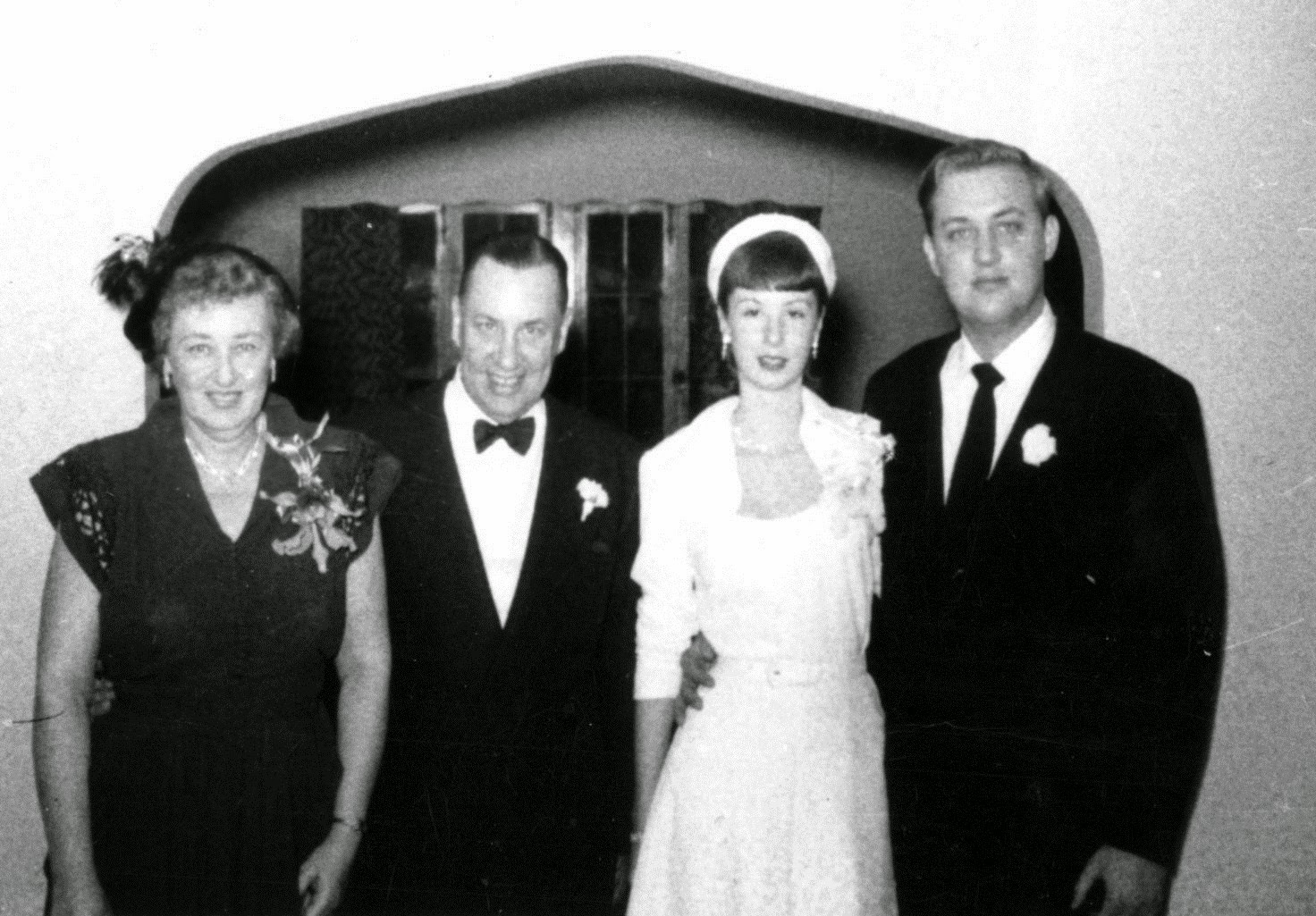 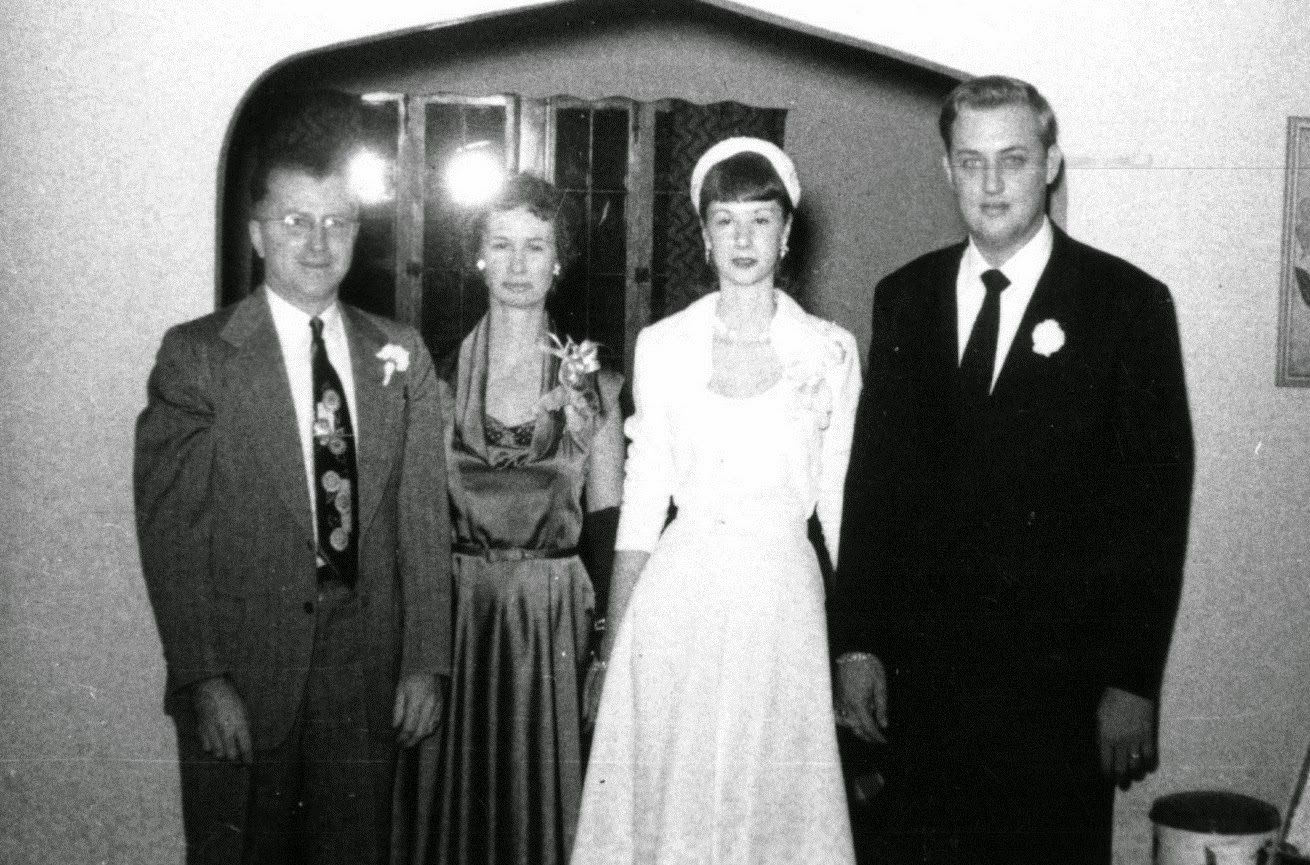 here are a few photos of the apartment she found for 37.50 a month... this was one week's pay for my dad and my mom's pay went to savings to buy a house... and so she saved from November 1951 until the beginning of 1954 when they bought their first home so they could bring their first baby home to a house rather than an apartment.  (the period furnishings are so much fun to see - six decades later) 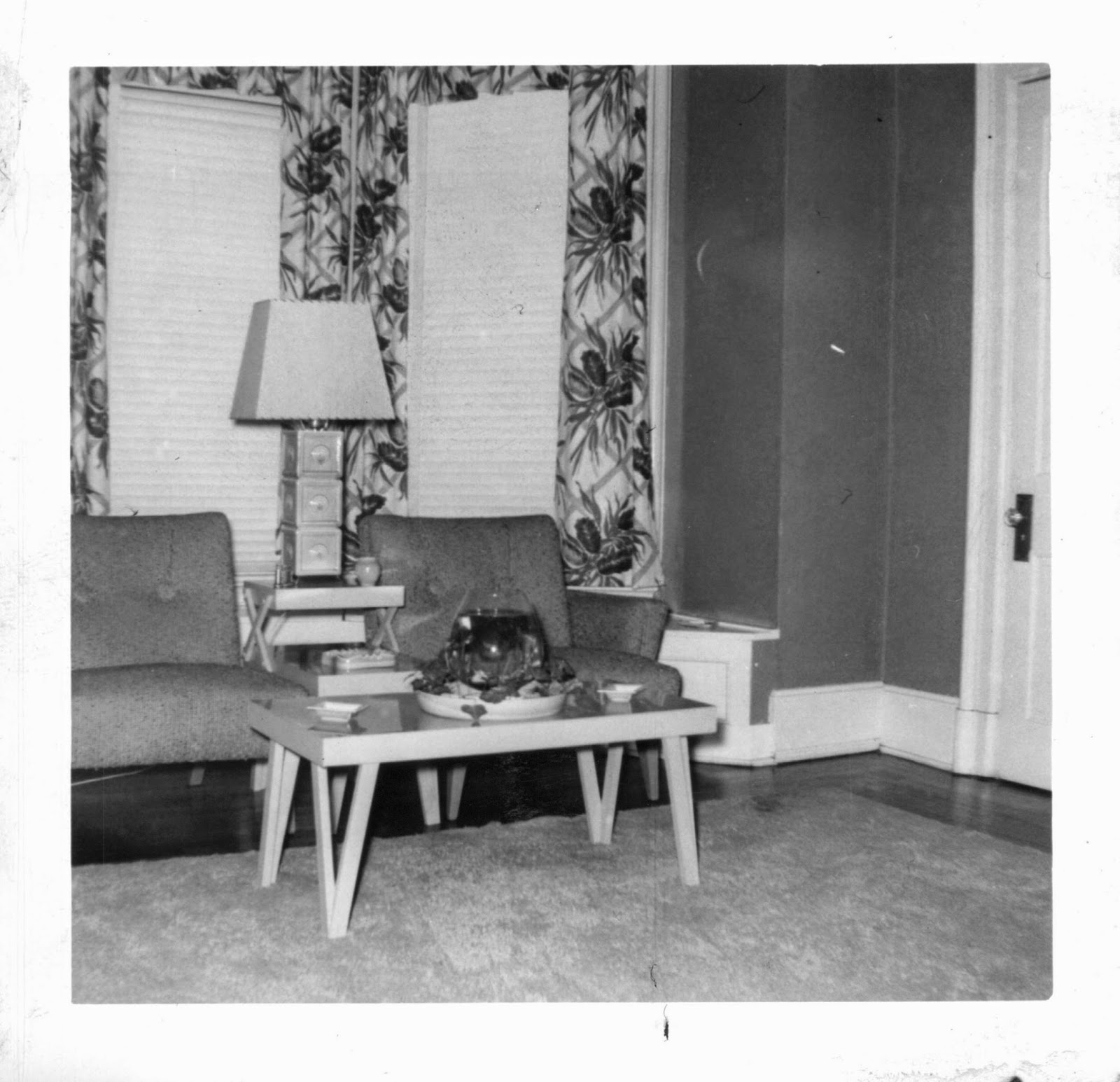 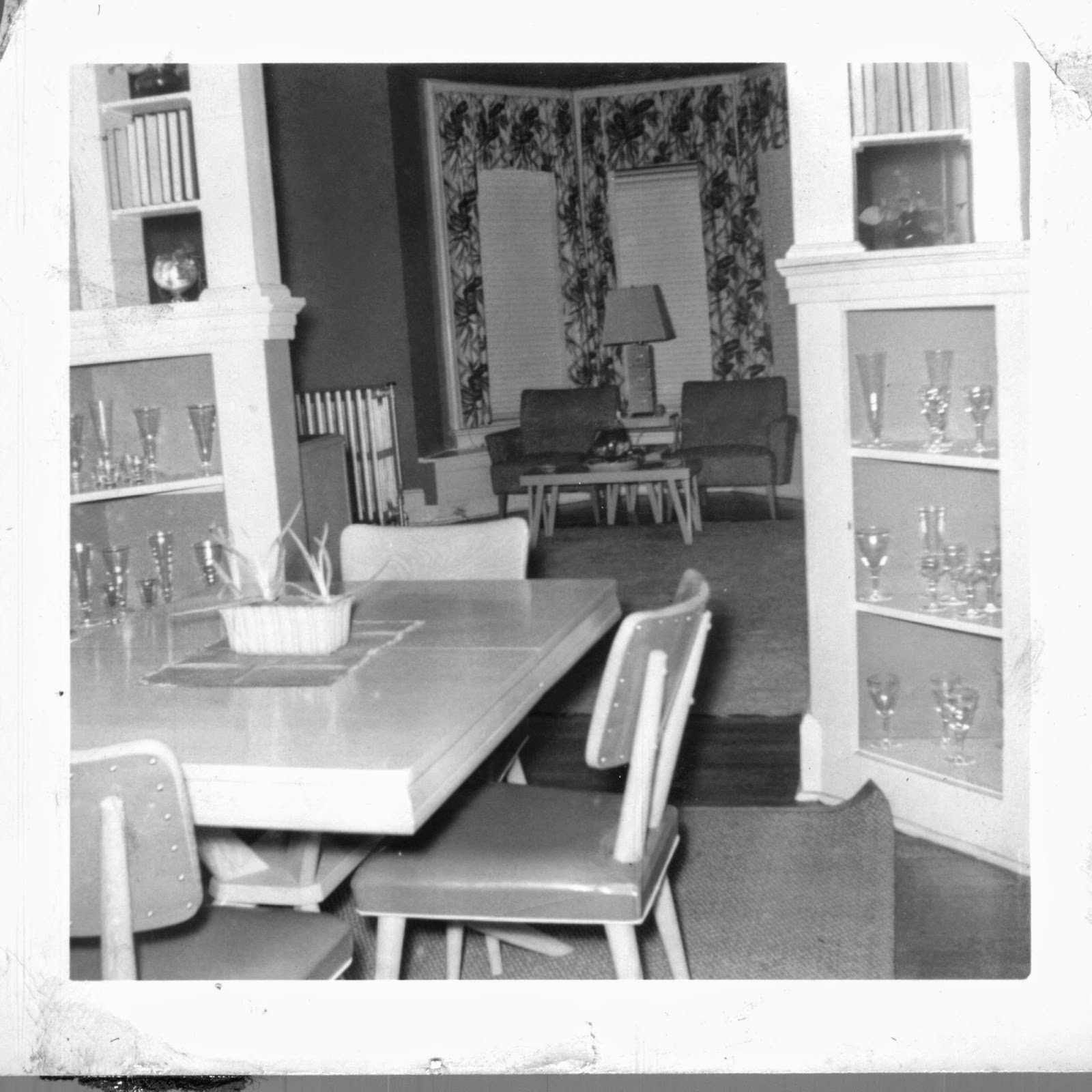 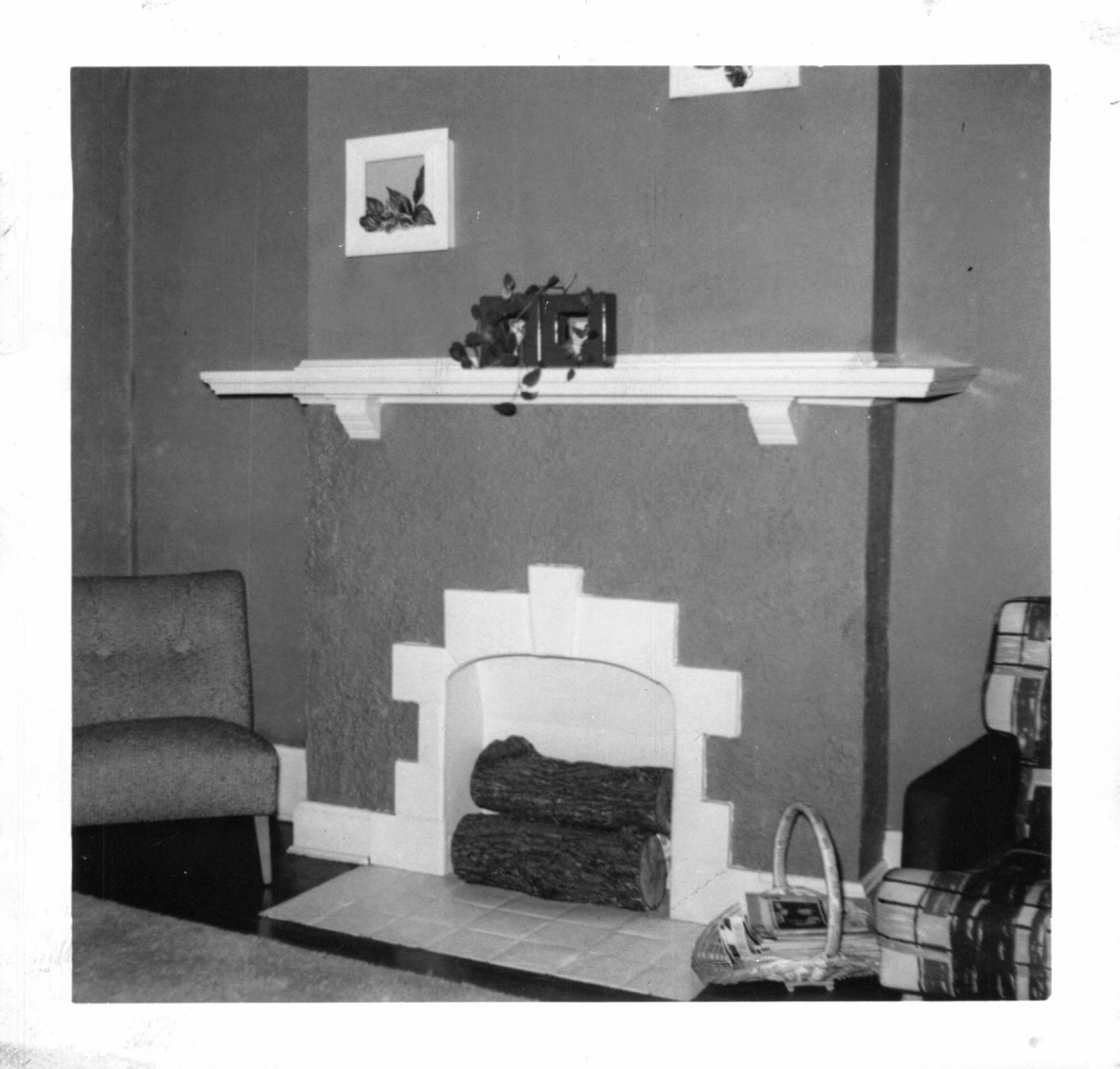 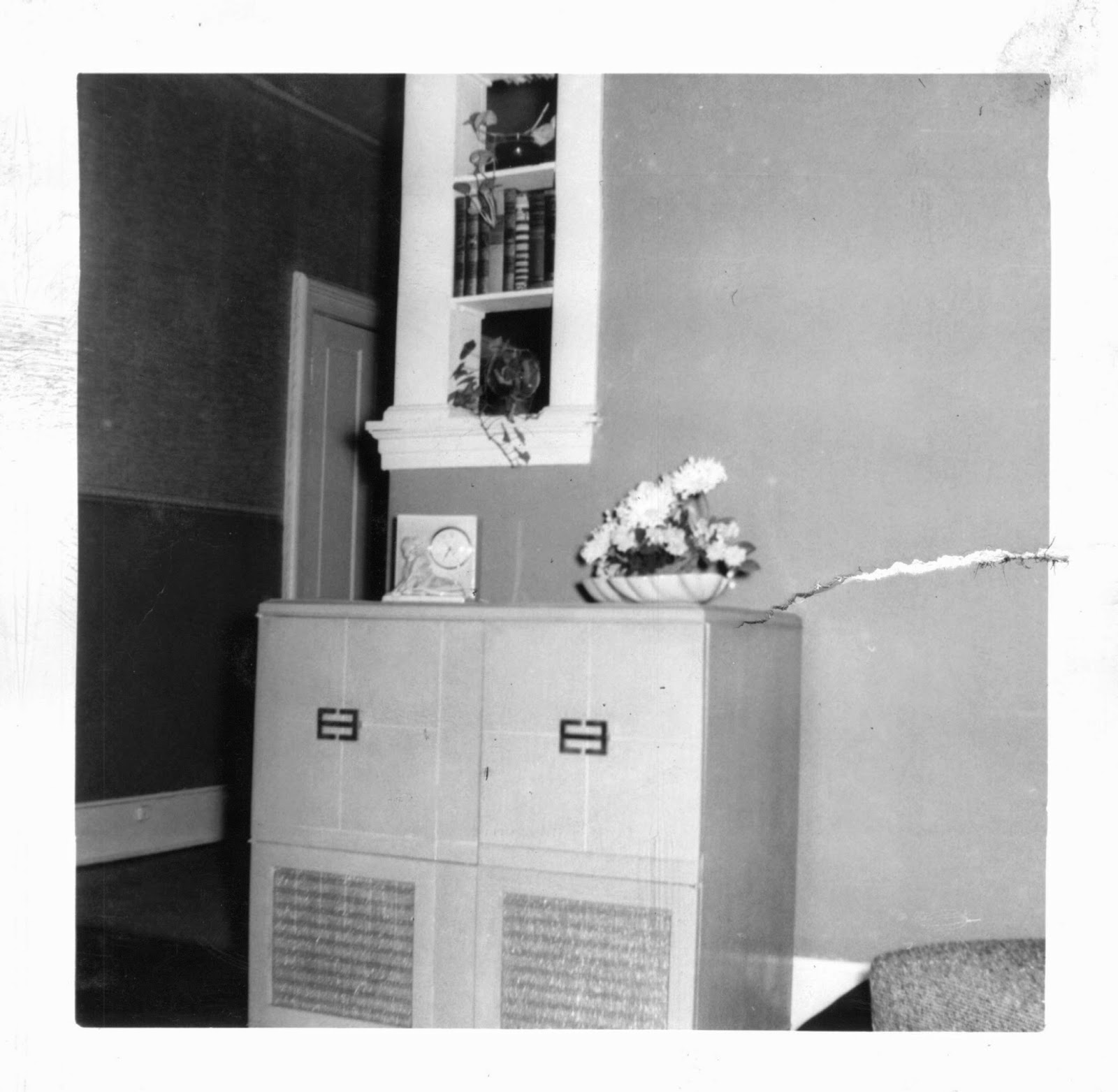 And after I was born my mother was a stay at home mom (that is a retronym of course because pretty much everyone was in the early 50s.) My sister was born 17 months later and by then my parents had saved enough money to buy their second home - a larger one - to bring the new baby home to... and by the time my brother came four years later they had built a new home for him to come home to as well.... so in the decade period of 1951-1959 they were building equity and net worth and a family.  My brother was born on the last day my father was 30... the day before he turned 31. These were goal oriented people folks- LOL... my dad always said he wanted to be done having babies by the time he was 30. And so he did and was... my mother was 29 when Jeff was born and now that they had a boy she was "done" as she later put it... 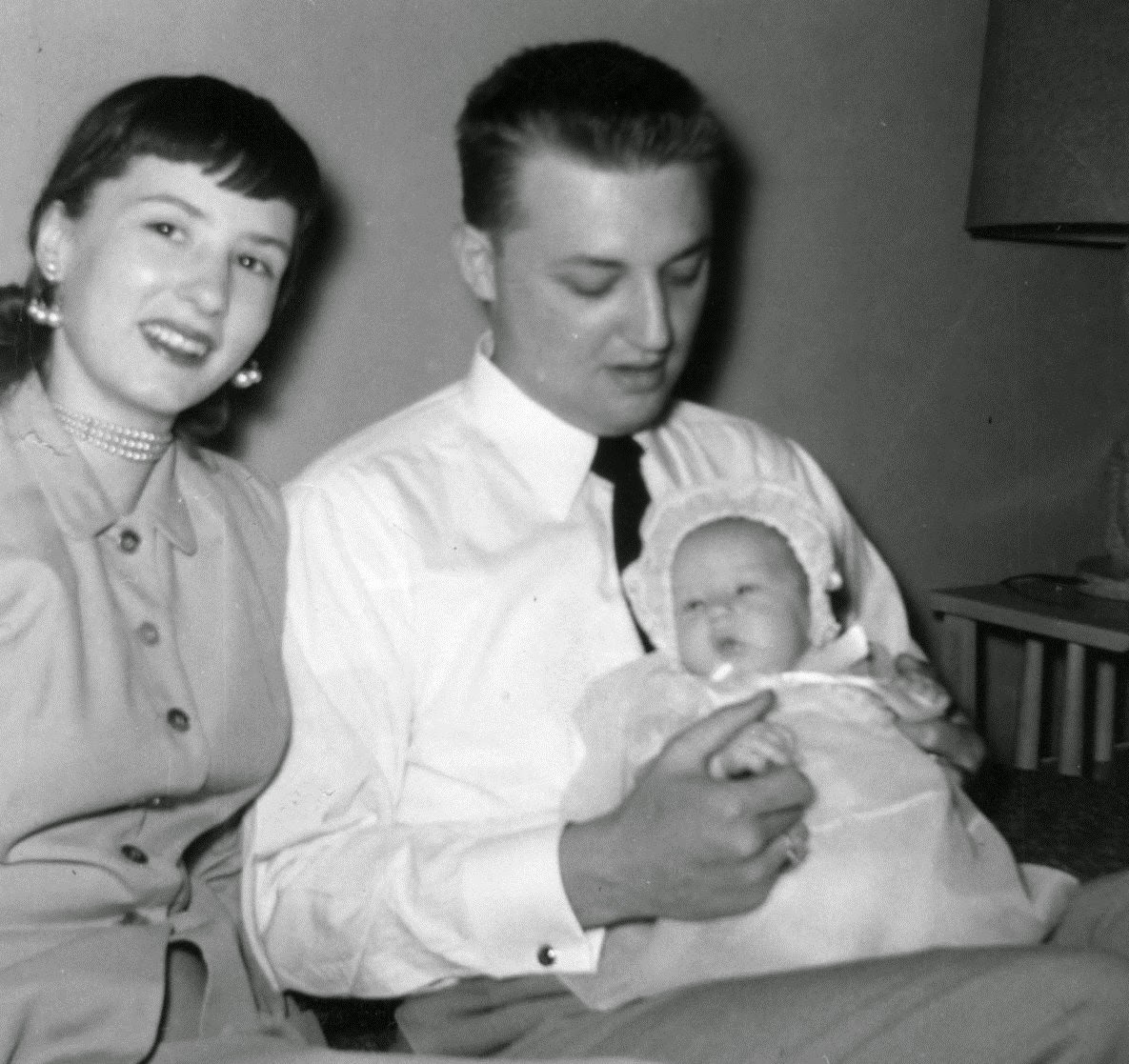 house #2 on Aspen Way - below and the back side of the photograph (obviously a note written by my mother's father to someone...not sure how I came to have it in my treasure trove of photos- which I am now in the middle of scanning...) 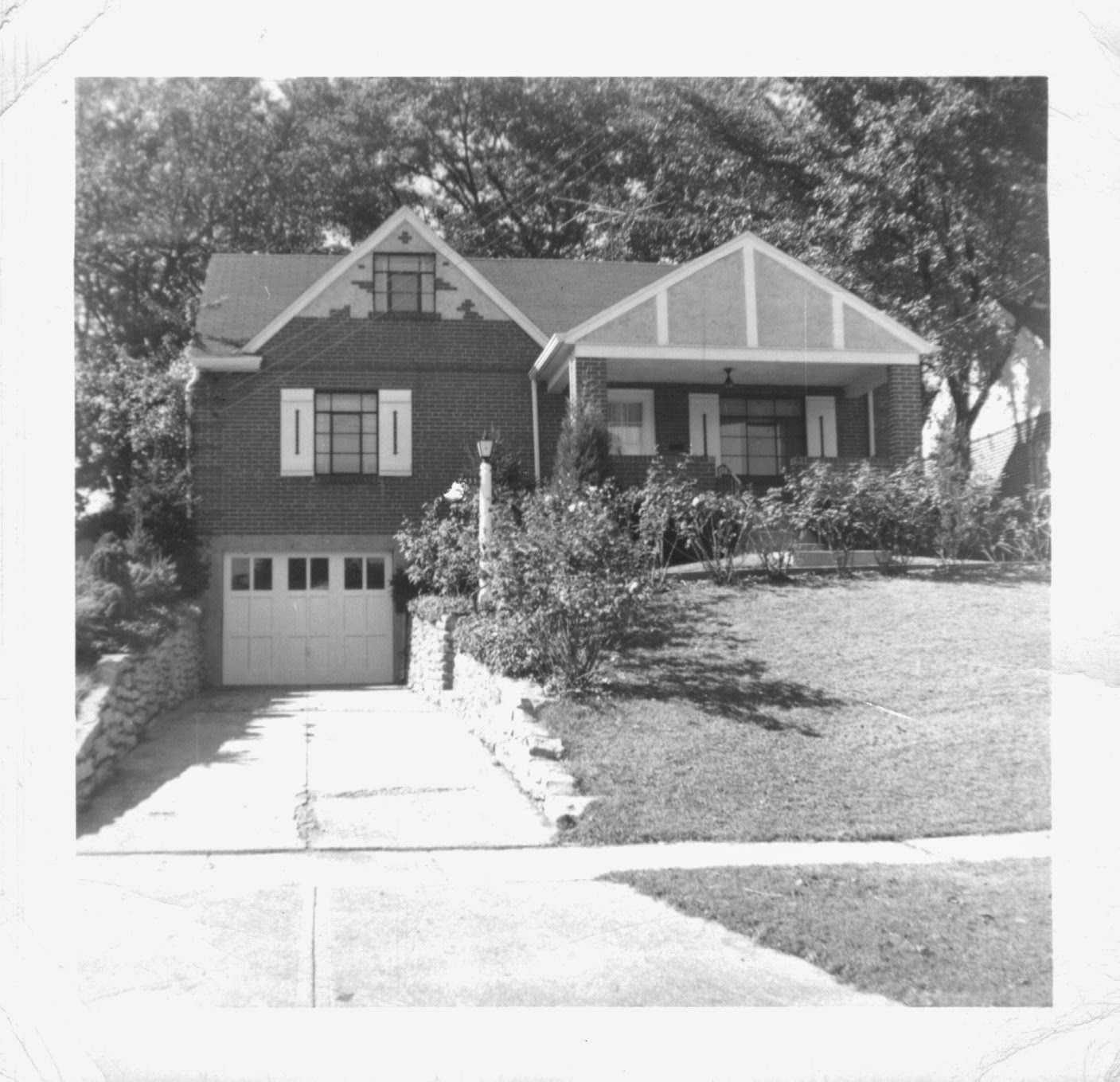 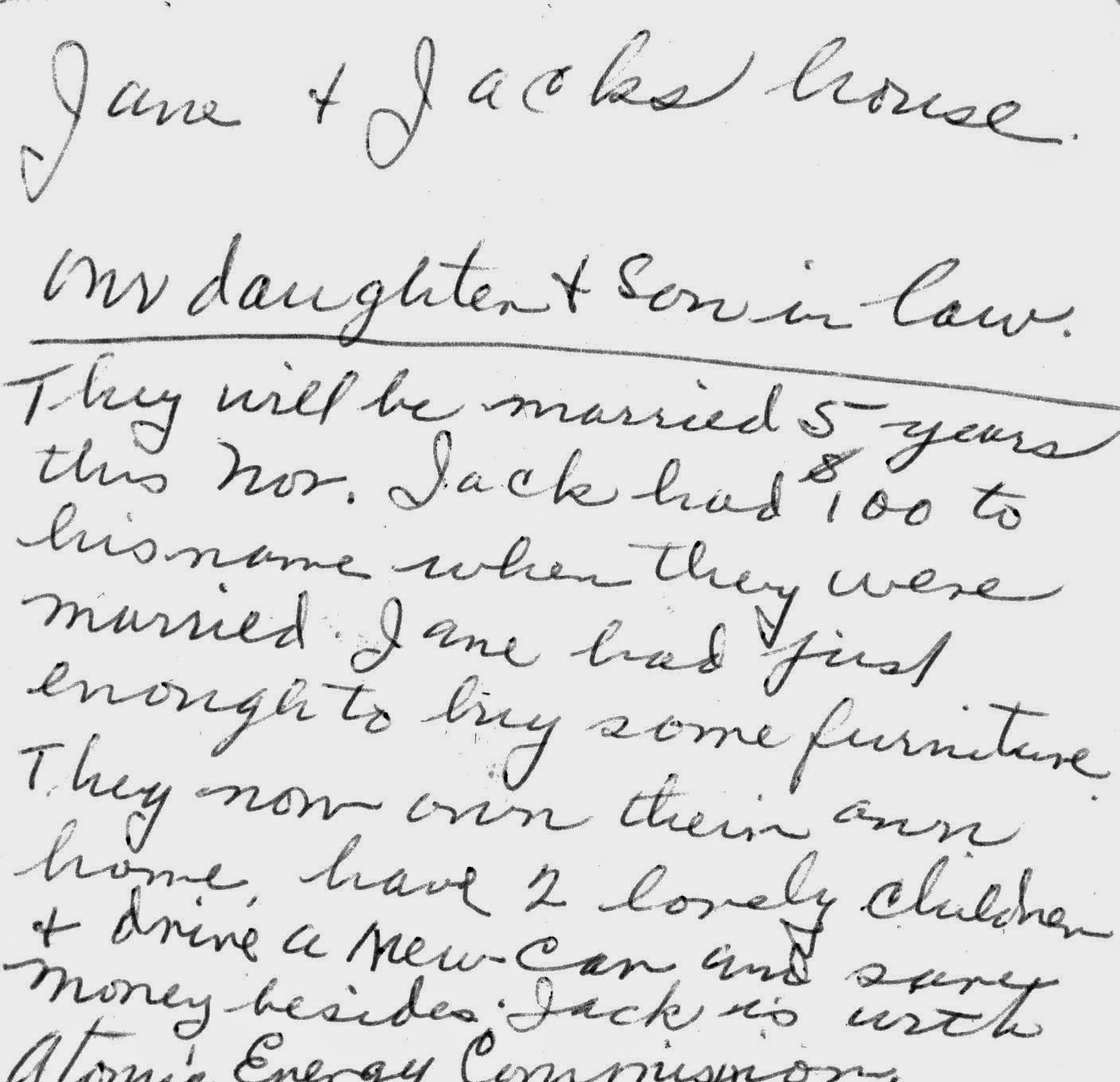 when  we were a family of four- 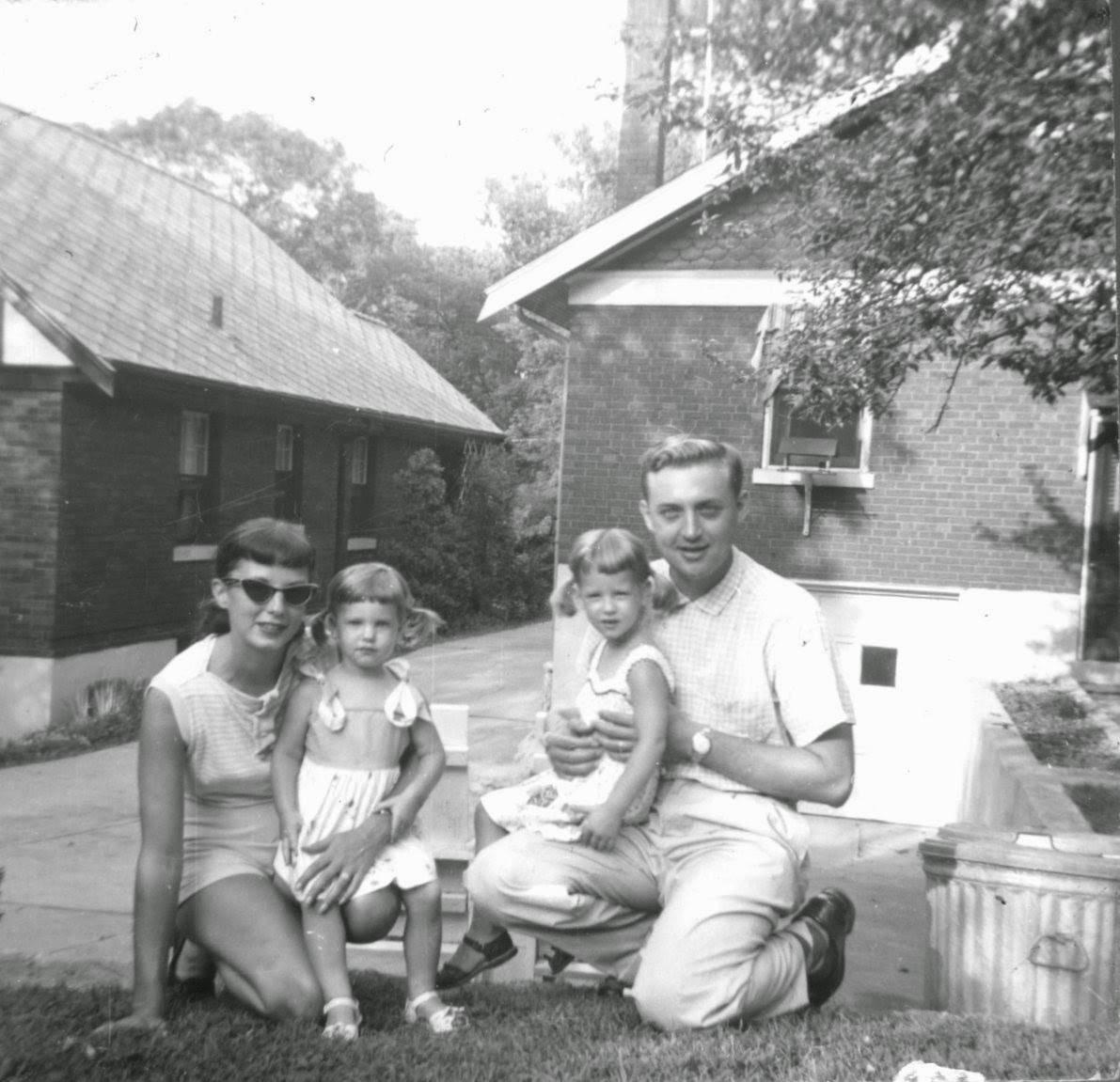 and then we were a family of five- 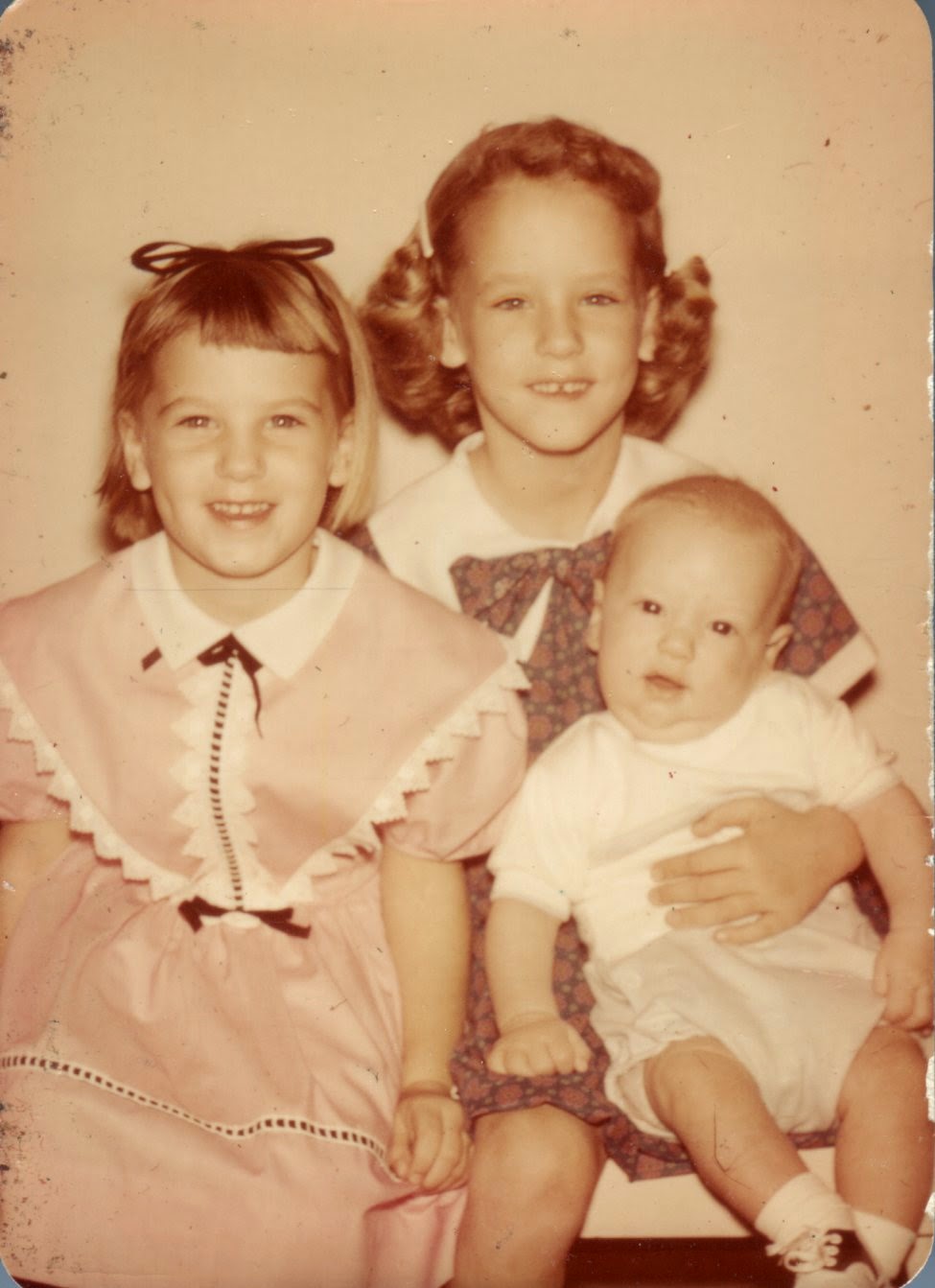 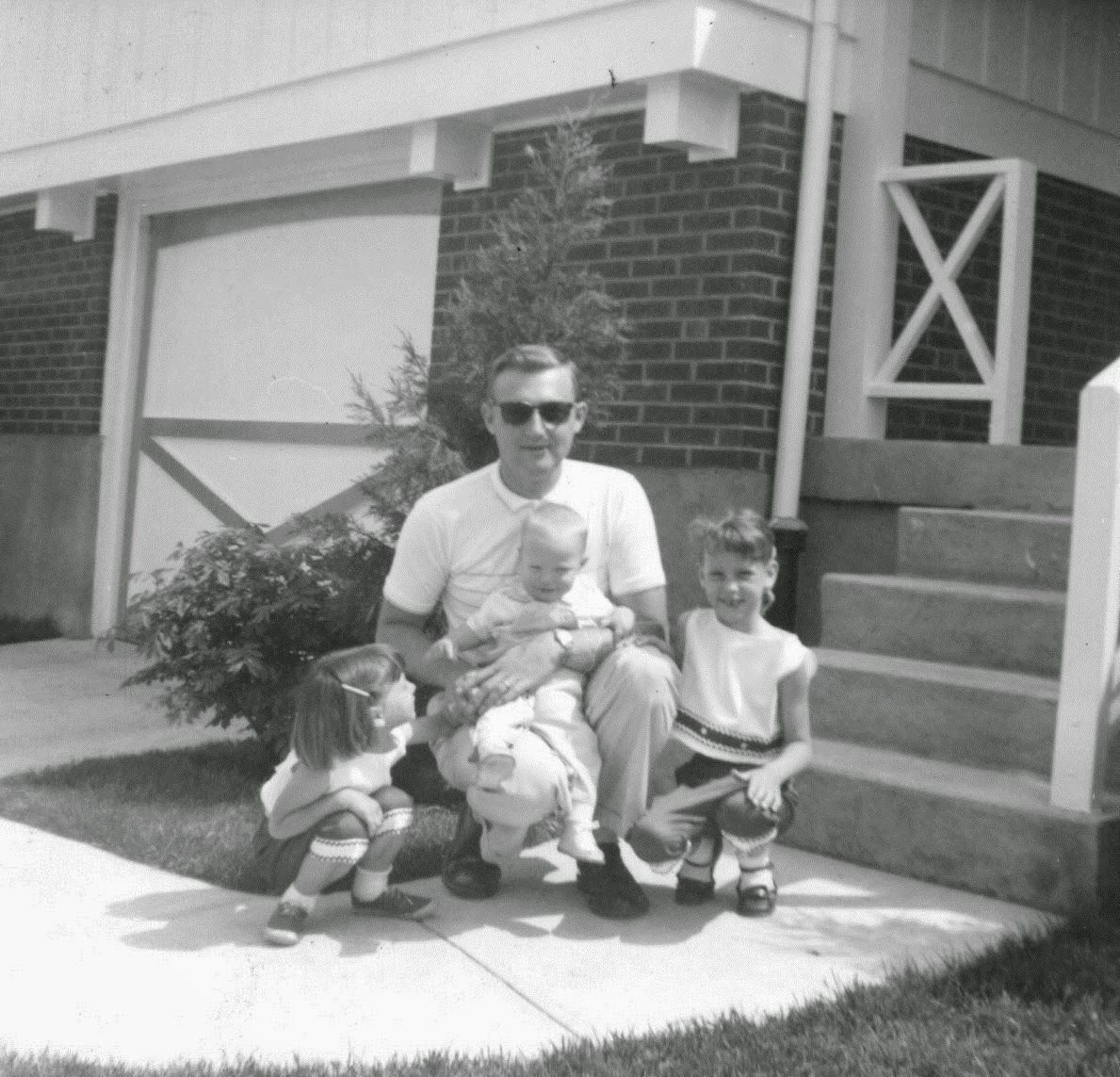 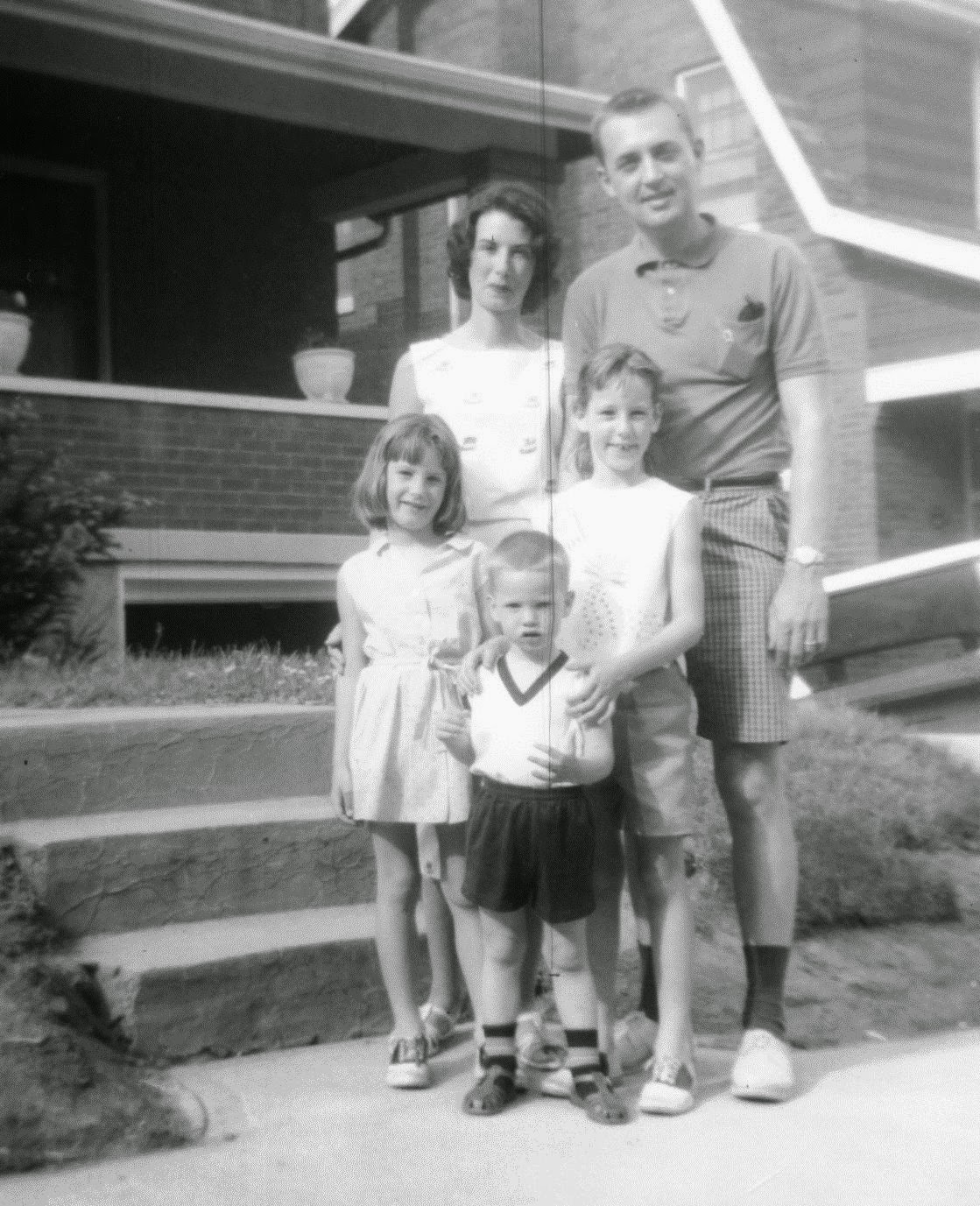 so we were like most kids of our age category and birth cohort- we grew up in a suburban tract home and learned to swim at the local pool, learned to ride bikes, roller skate, build forts from hay bales on the farm behind our house which hadn't yet become another set of streets and houses. We had cats... we always had cats... a succession of cats...  Every Sunday we went to dinner at my grandparents house.

and then things changed in the mid 60s - and when my brother went off to school my mother decided enough of the mom thing and started working... I think given the timing that, although she never professed it, my mother was becoming a stealth feminist.  She went to school to get a real estate license and sold real estate when we lived in northern Ohio.

When we were in high school my mother advised my sister and I of several things that reinforce the stealth feminist theory... she told us to be sure to learn something so that we would always be able to support ourselves and make our own way in the world.  She also advised us to never learn how to iron or to type as this could lead to dead end jobs of housework and secretary... LOL which we always teased her about later in life when both my sister and I were attorneys and couldn't type at all. Fine when you had secretaries of your own but not so great upon the advent of computers and "keyboarding" LOL-  OK so she wasn't clairvoyant...

After we moved away when I was in high school, and moved then again as I started college, she worked in a succession of jobs... as a tax advisor for H&R bock, as a bookkeeper for a large men's clothing store, as a teacher's aide in special education, and as a buyer and manager of a women's retail store. When my parents retired she volunteered at the grade school on Anna Maria and also at the Chamber of Commerce. 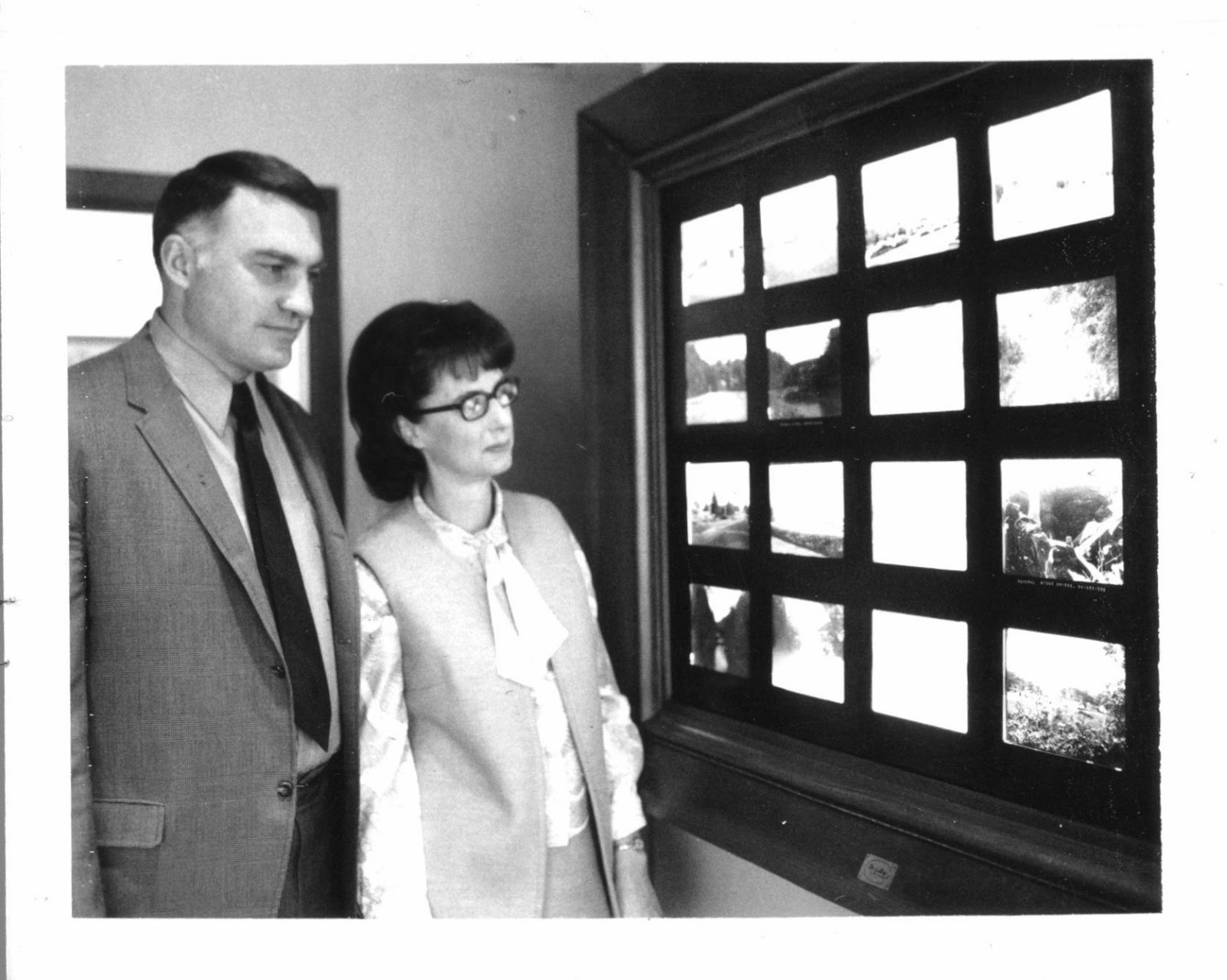 the store she managed and bought for - "martha c." 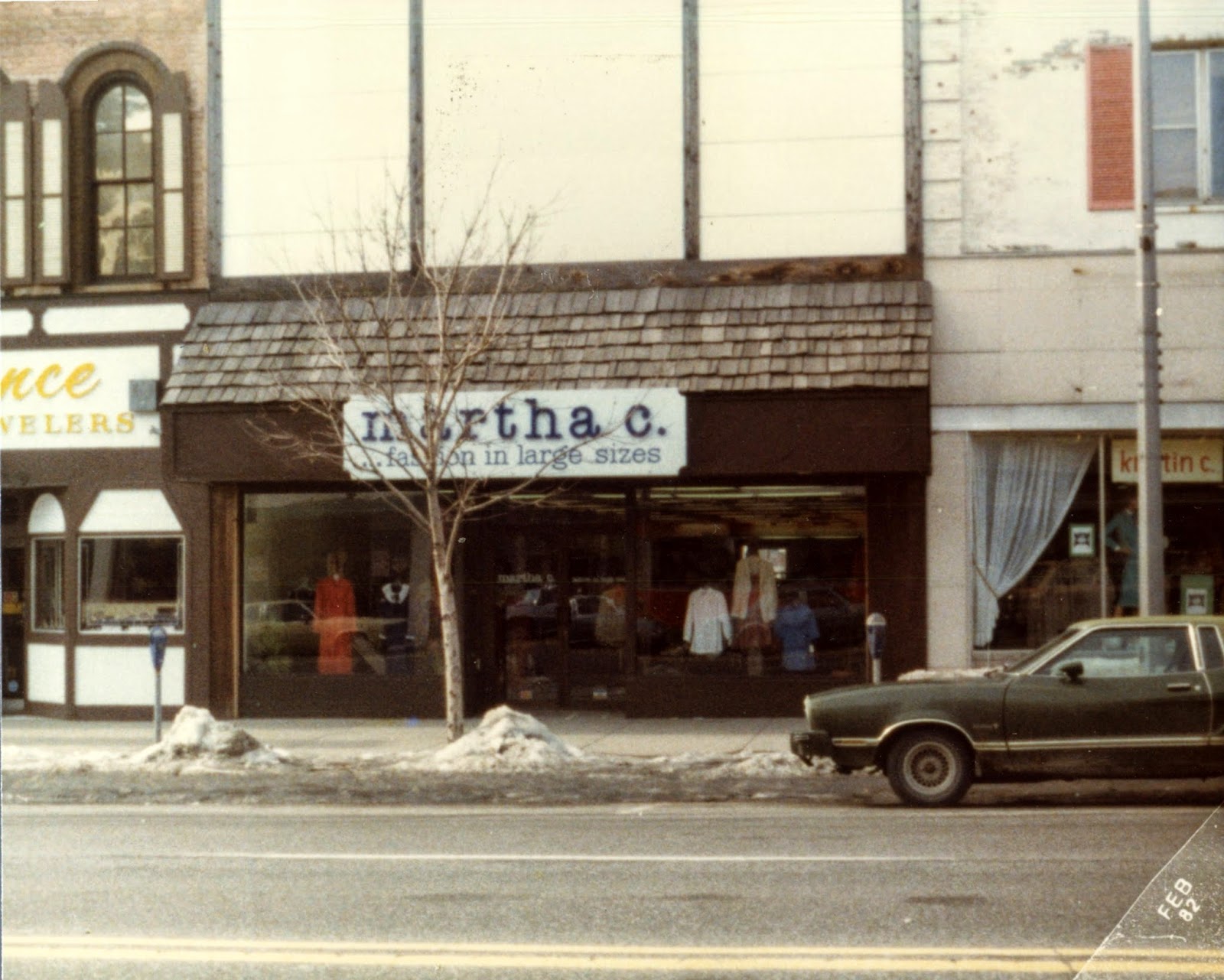 My mother was a quiet rebel... she wouldn't make waves or a lot of noise but just go about doing things exactly the way she wanted.  She managed the family finances while my dad managed the investments. In 1983 she got a passport and started traveling the world.  Sometimes she would go with my father and sometimes with her father (who had never lost his wanderlust but simply put it on hold) and sometimes with her sister, Phyllis and then later with me as well.  She loved to travel - my dad not so much- he was a real homebody and would have preferred to work on his old cars and putter around the house than get on a plane to go to some country where it was a huge undertaking to get enough ice for his vodka tonics! LOL....

below - my mother with friends Rollie and Pearl Schwartz - she took her first trip abroad with them as part of the US Olympic Boxing team LOL- yes really and no I don't have time to go into every detail of my mother's fascinating life....LOL 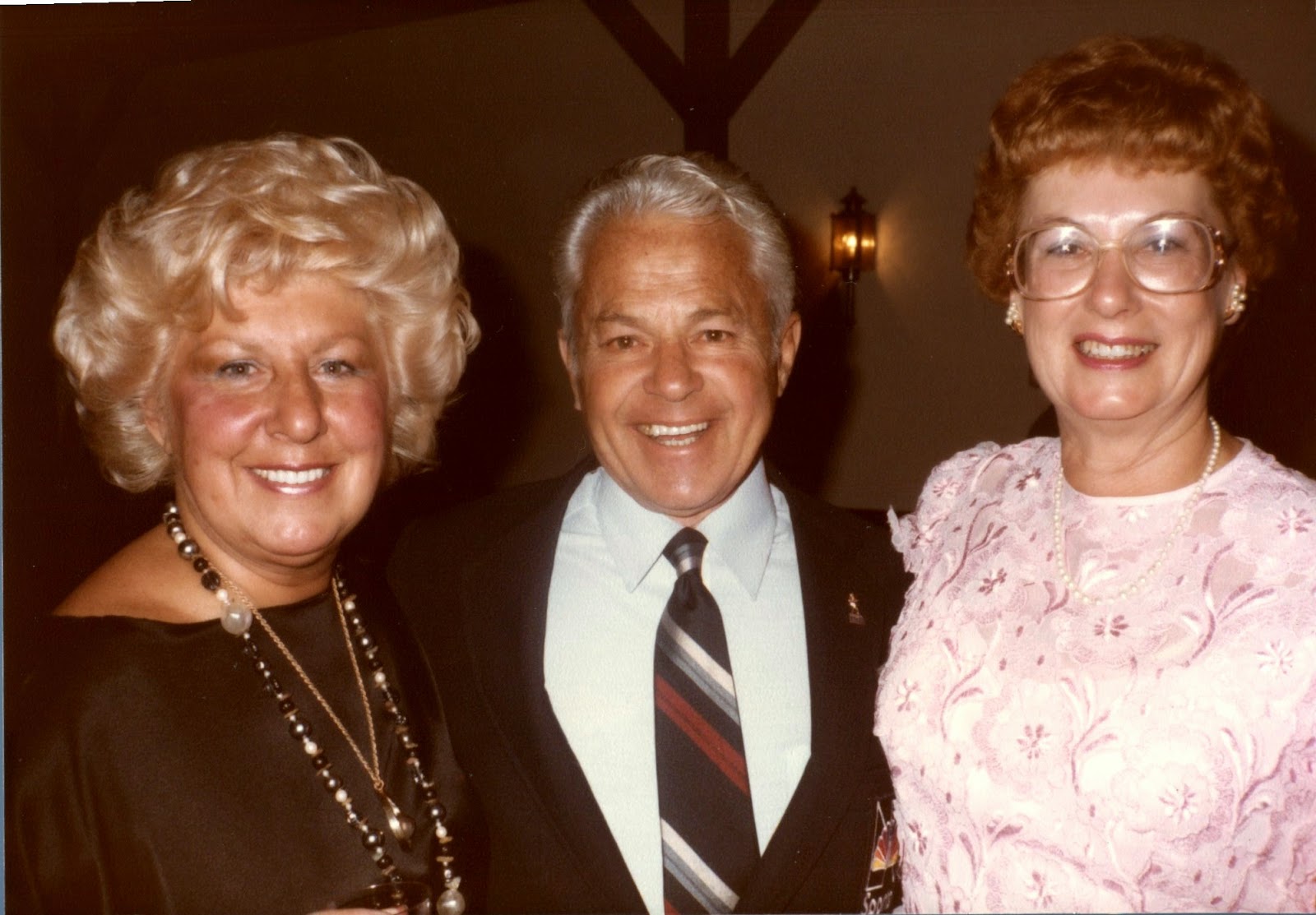 My mother always did things her way - so she would just plan trips with other family members.  One of our first "girls trips" was to Washington DC and Williamsburg.  When I was in law school and my sister was about to start law school, she took my sister and I after having saved money for the trip from whatever her current job was... her treat!  This was the first and only time we did a girl trip with my sister, who, it turned out, was really like our father in that she just didn't see what the purpose of leaving home was... LOL while my mother and I went on to travel to a number of countries and many US cities as well on the years where foreign travel didn't meet our individual budget restrictions.

at some point - when we were all in college or grad school she went back to college to get a degree. my father groused about now having to pay for FOUR college tuition bills LOL- but he was proud that she was completing "unfinished business"

the family grew- we all got married and some got divorced and my brother and sister had kids- and she became a grandmother- a job she adored!

below at the christening of my nephew Mitchell in 1989 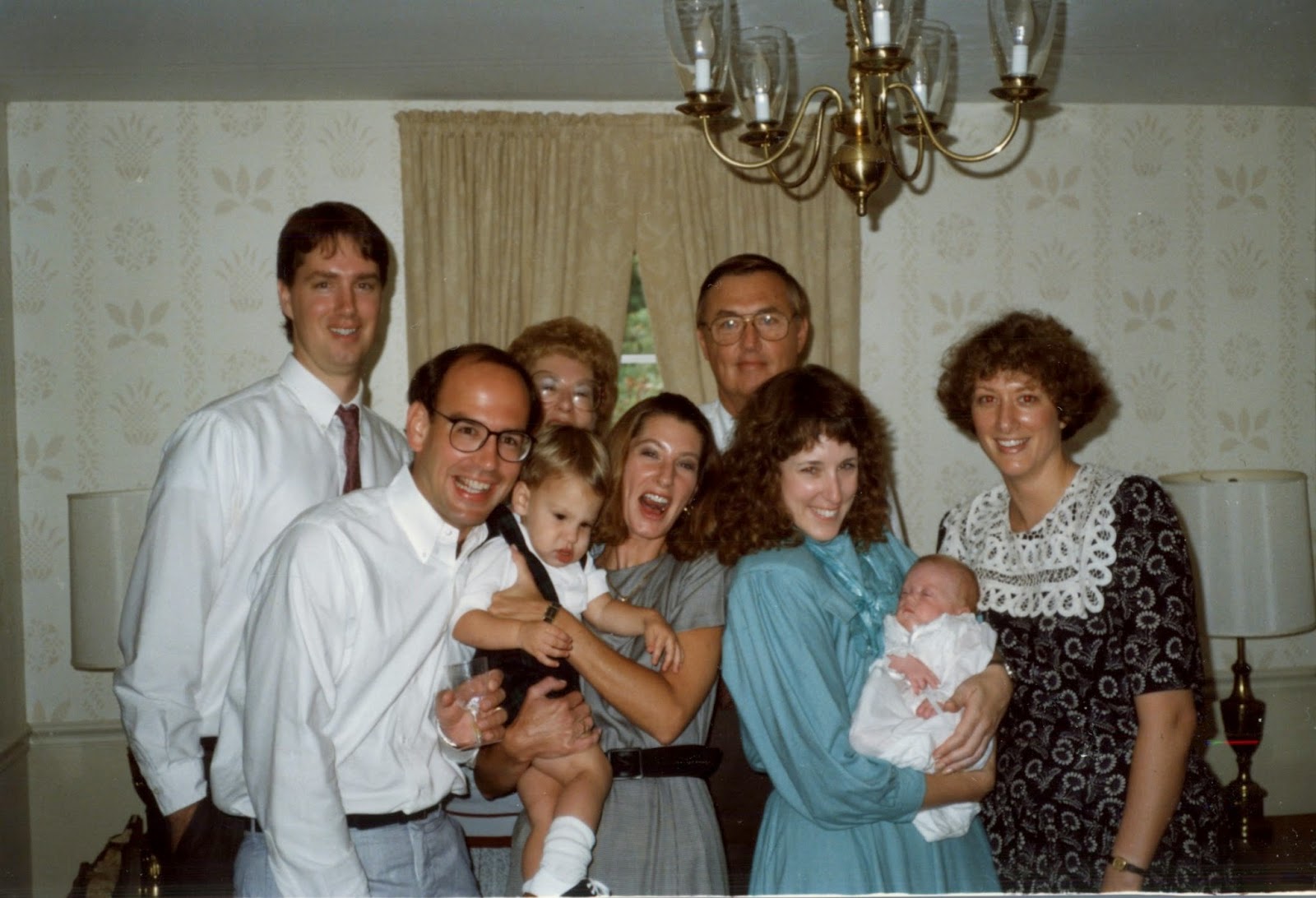 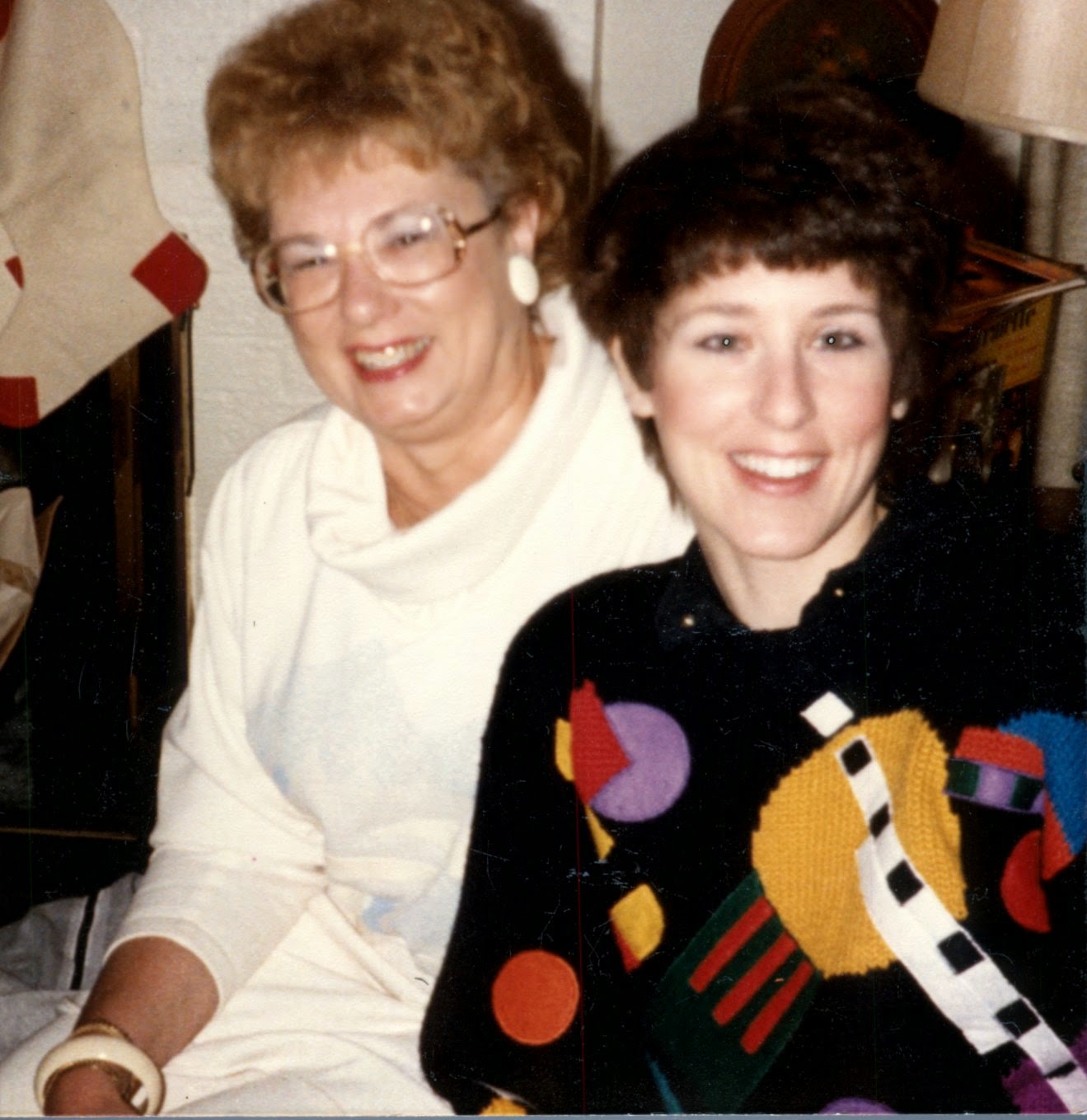 our first Europe trip together was in1993 to Germany with my Aunt Phyllis and cousin Chris but the next trip we took to Europe was 1995 and we spent three weeks in Venice and Florence- here is my favorite photo from that trip-  We always loved planning trips and deciding where to go and what to do.  And my wanderlust is a direct line from my grandfather to my mother and from my mother to me... 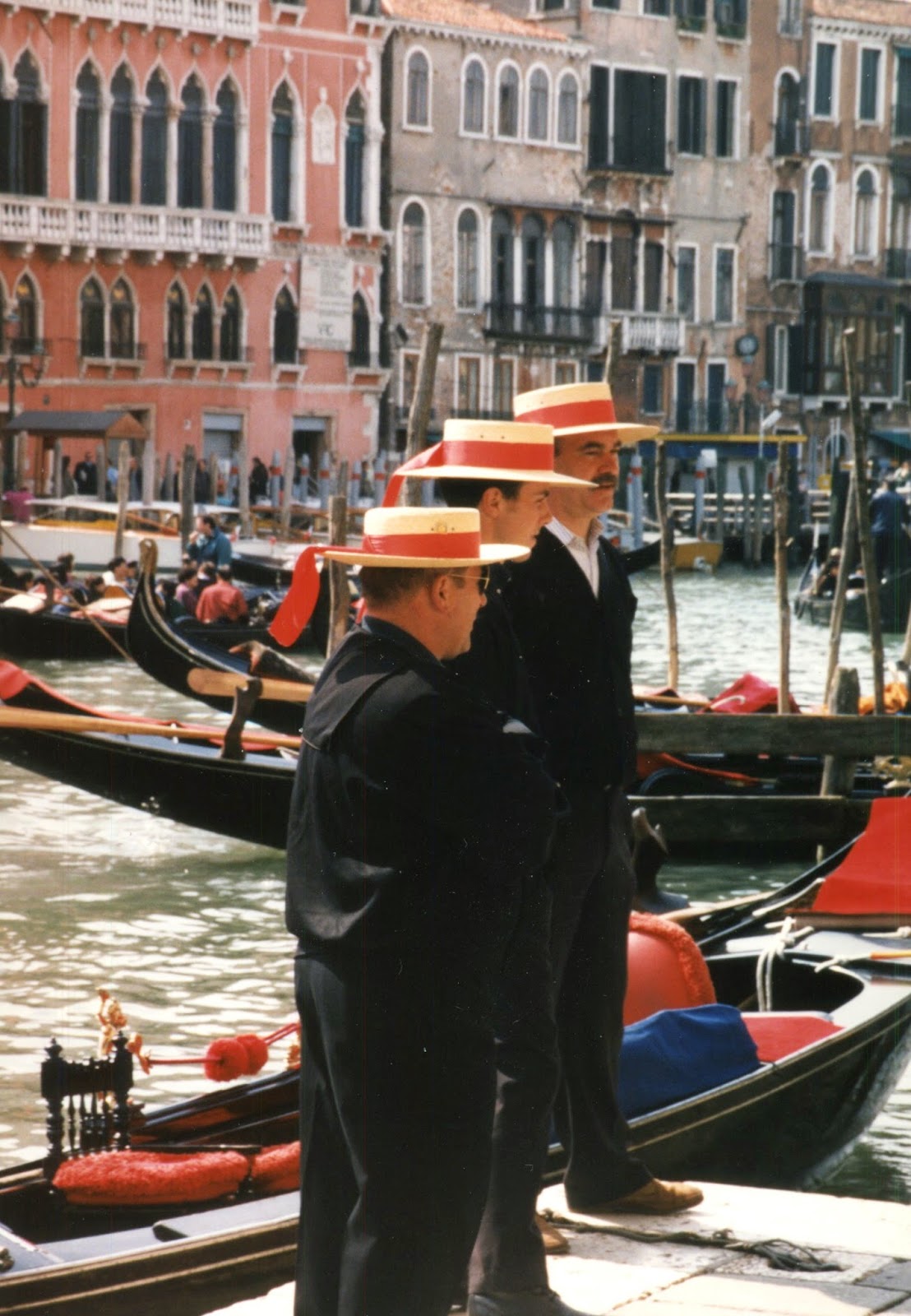 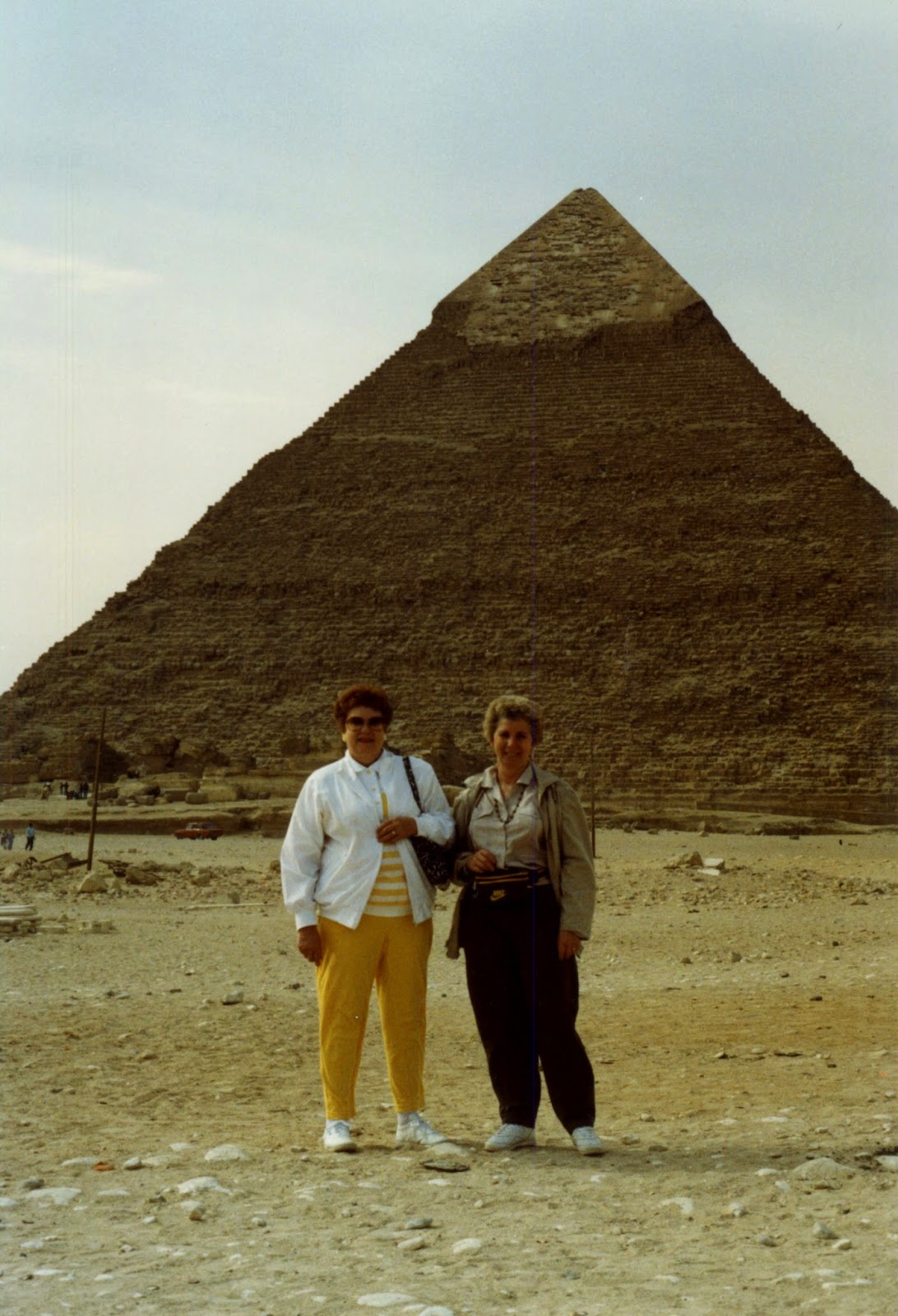 her 75th birthday celebration at Harry's on Longboat Key- LOL by this time I have snagged a second husband - the photo is my brother Jeff (yes, we are all tall - my dad's business friends all called my mother Miss America because she was so tall for her age group - 5' 8") my husband Phil, me and my mom. 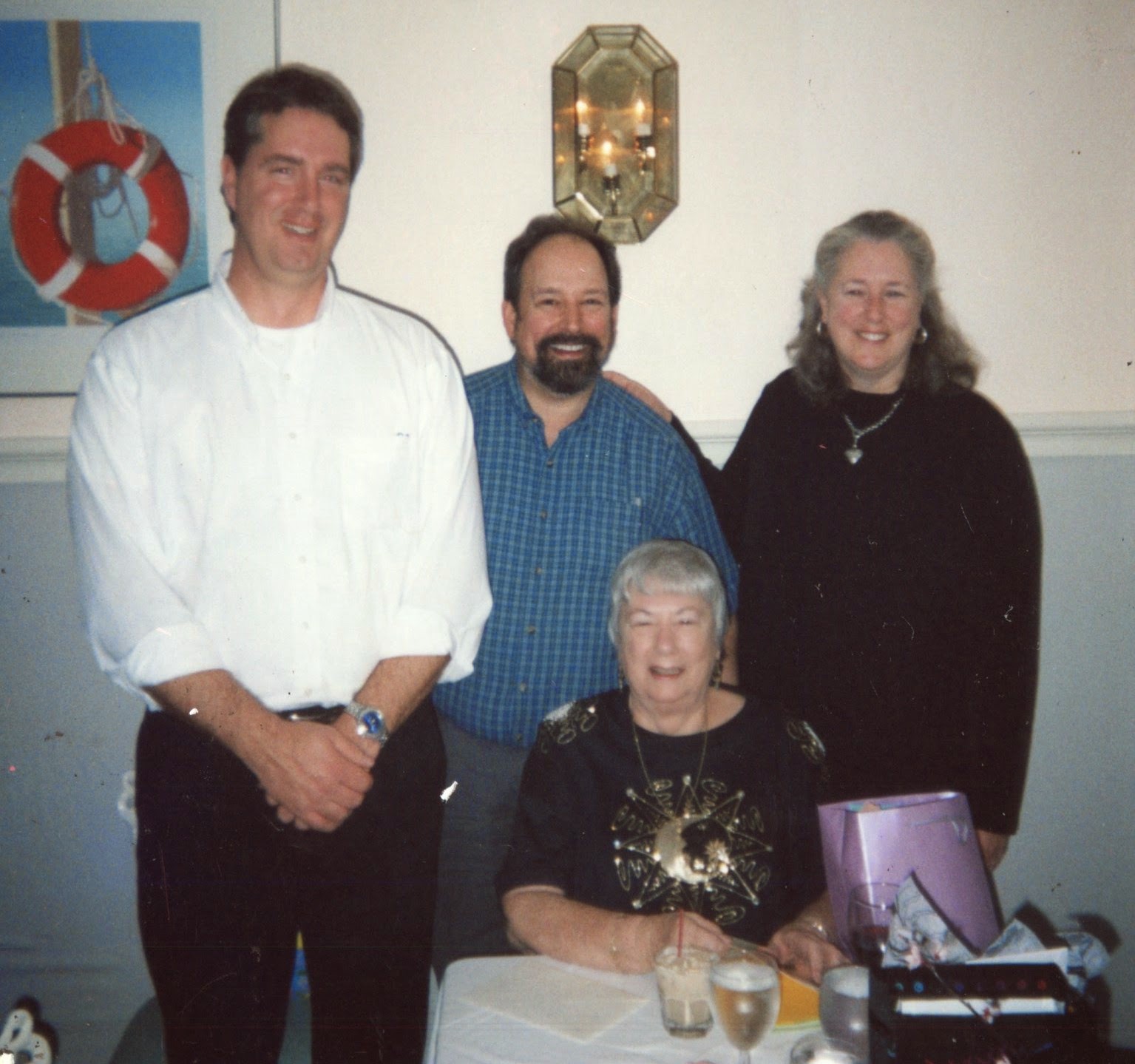 My mother was the person who ALWAYS saw the glass half full- she lived with a optimism that everything would be exactly as she wanted it to be for pretty much all of her 80 years.  She gave us many gifts along the way... but perhaps none so great as the belief in ourselves and our ability to create anything we want in our lives.

So it was a really bad year for her when we lost my sister at 54.  It was also the year that her health turned against her with a metastasis to her bones of breast cancer from a decade earlier.  She ended her life in her usual style - deciding exactly when she was ready and stopped the medical regime for the bone cancer and CHF and various other things- and she stopped eating and died about ten days later. I will miss her forever- an amazingly interesting woman.

She was so strong willed, that more than anyone I know or ever knew, she created her own reality. Not by being a bully about it by simply holding fast to what she wanted and believed.  And when she was done, she was done.
Posted by TOR at 12:24 PM