Tonight, a new adventure! Our very first "LIVE" remote theater.  We went to the Historic Asolo Theater on the grounds of the Ringling Estate  to see the UK National Theater production of David Hare's Skylight.

"East London school teacher Kyra Hollis is visited on the same night by Edward Sargeant and, later, his father Tom Sargeant. Kyra had been living with the Sargeant family years earlier but left after her affair with Tom was discovered by Tom's wife, who has since died. Edward now accuses Kyra of having left him as well, as he saw her as a big sister, and he demands to know why she left his life.

"Shortly thereafter, Tom, a wealthy restaurateur, with real life references to Terence Conran, appears unheralded and for no apparent reason. Kyra's less-than-glamorous lifestyle leads him to poke fun at her to the point of insult, accusing her of self-punishment. After Kyra cooks a spaghetti dinner (which the actress cooks on stage), the talk turns to their relationship, and it becomes clear that their chances to be rekindled rest on whether one of them can change preconceived notions of the other. A new production directed by Stephen Daldry and starring Carey Mulligan, Bill Nighy — reprising the part he'd performed in 1997 — and Matthew Beard opened at the Wyndham's Theatre in June 2014. The play was broadcast live (or near-live) to cinema audiences via NT Live. " (wikipedia)

Two thumbs up from this audience - lots of funny lines and good "jokes" while still delving into the essence of the characters and their willingness/unwillingness to make comprises in order to establish a renewal of, and long term committed, relationship. They both seem to desire the love, but have difficulty making progress towards it, being so bristly and righteous with each other.  The excellent dialogue- humorous and touching at turns - was worth a close listen. 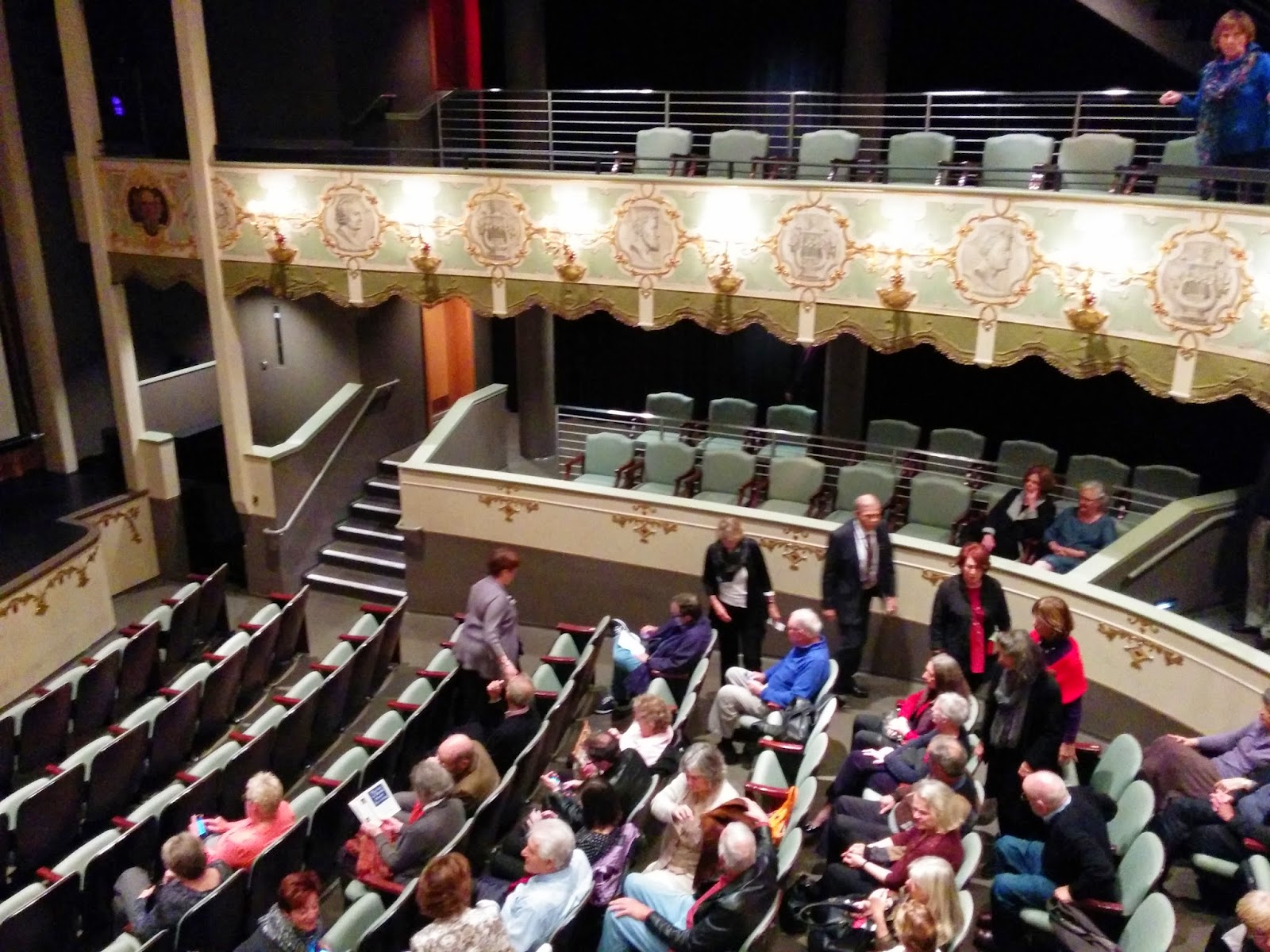 the show was broadcast in the Historic Asolo Theater- and had a 20 minute intermission (interval in Brit speak- LOL) just like at the theater- I would have preferred to have had the thing run straight through and since this was a rebroadcast not LIVE (despite the name of the feature) they could have eliminated or shortened this IMHO... 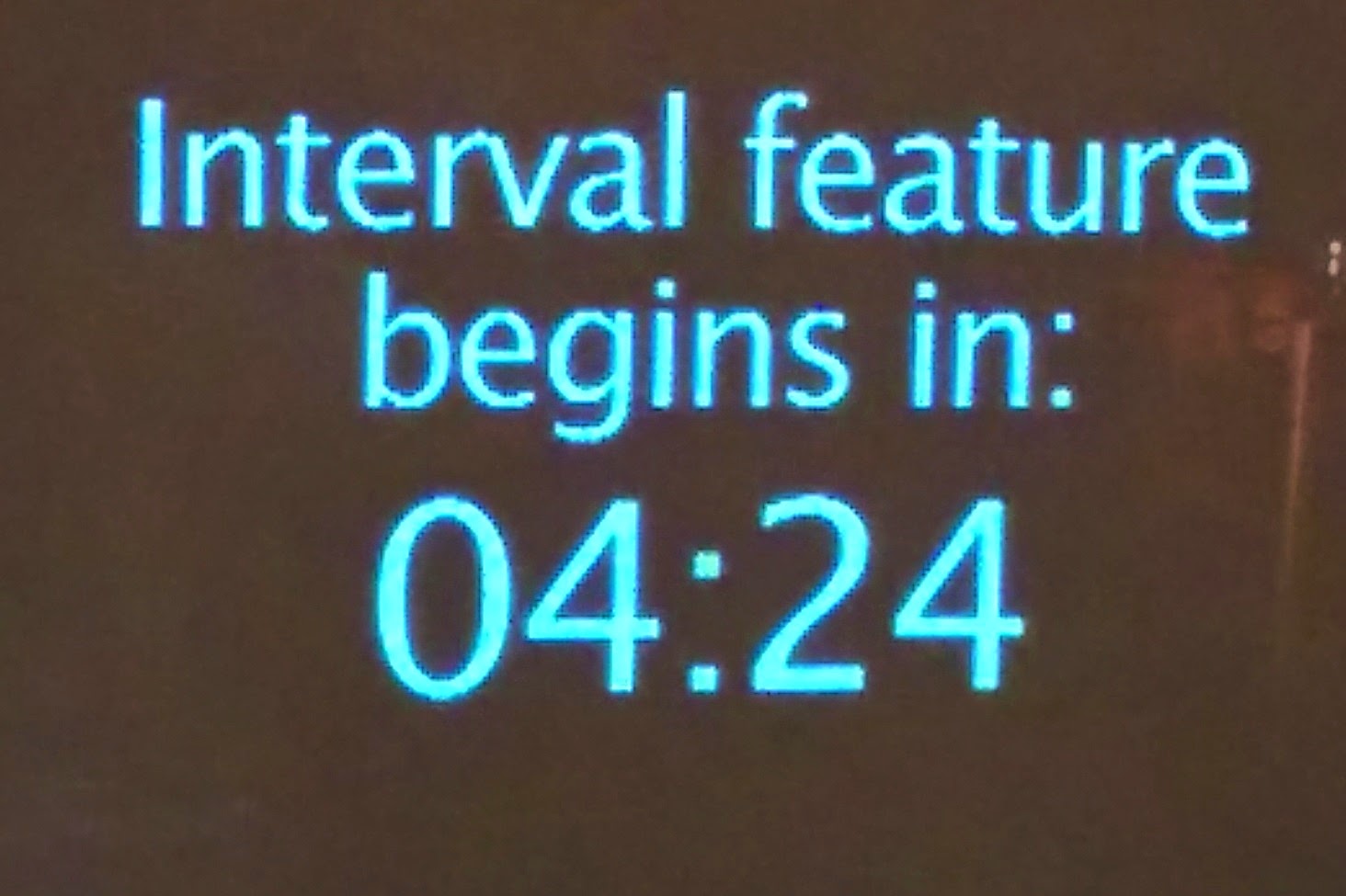 David Hare the playwright was interviewed during the "interval" - 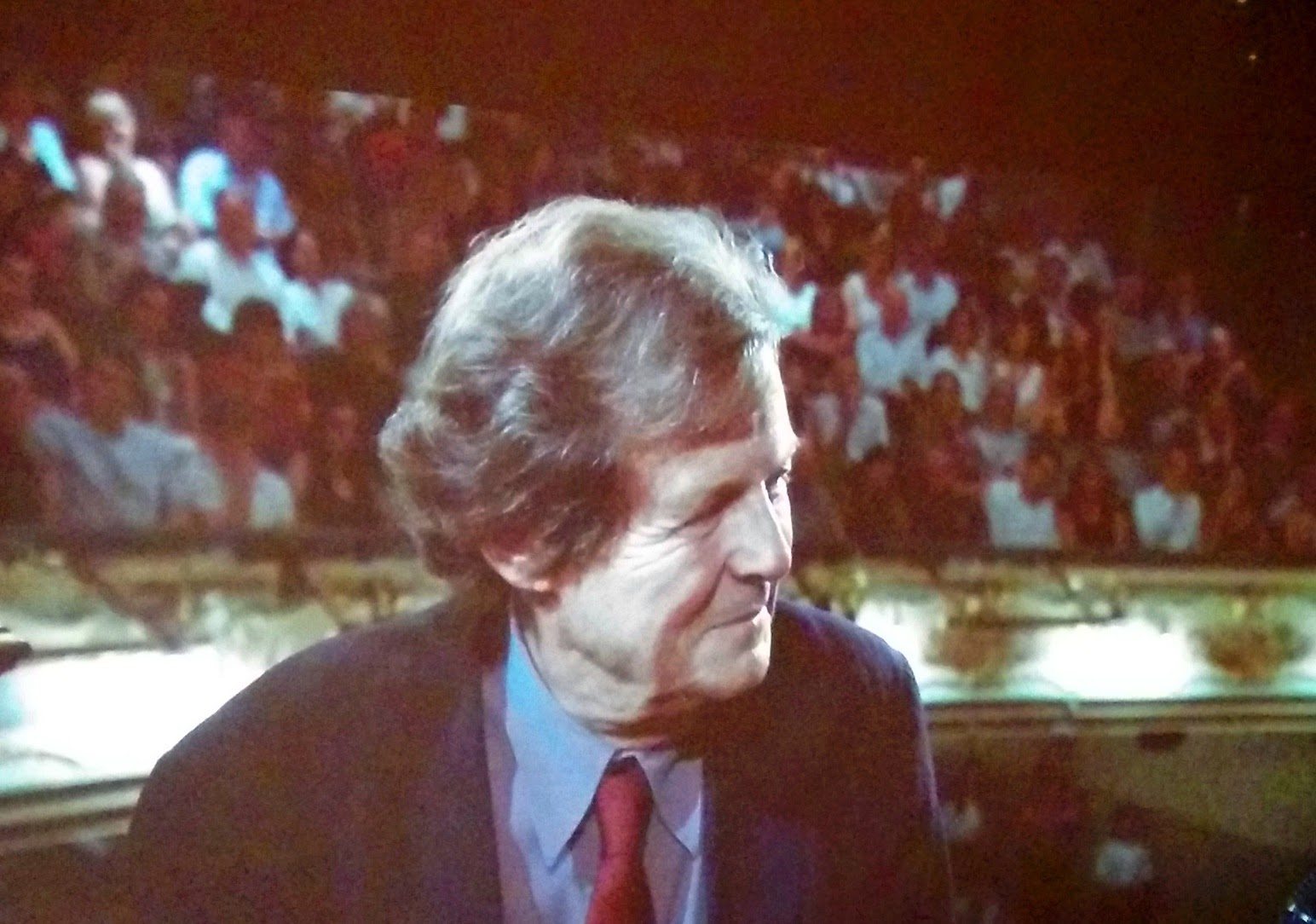 Tom putting on his coat to stay warm in the unheated flat - the heater lights up but doesn't really work (as each character comments upon it during the play.) 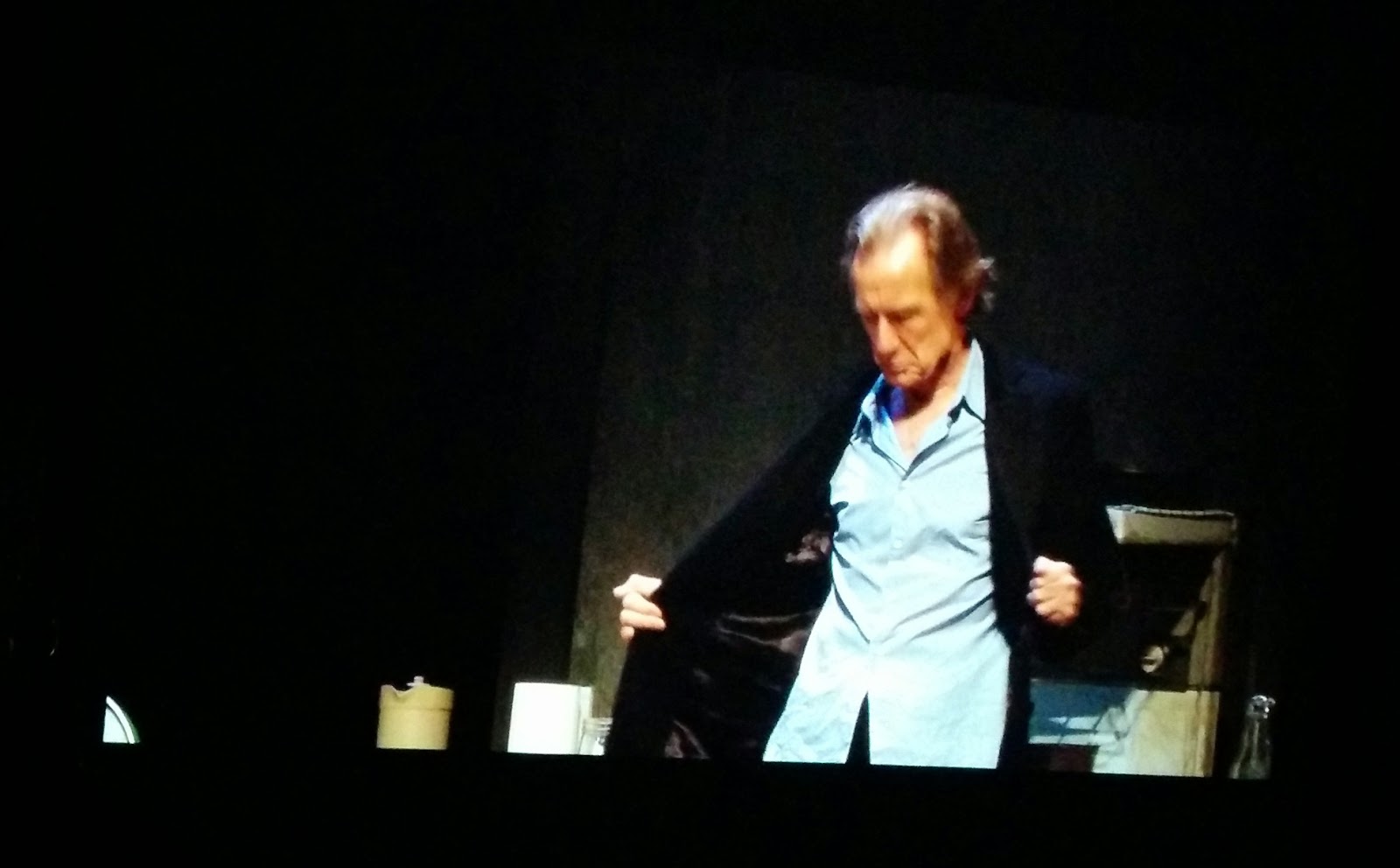 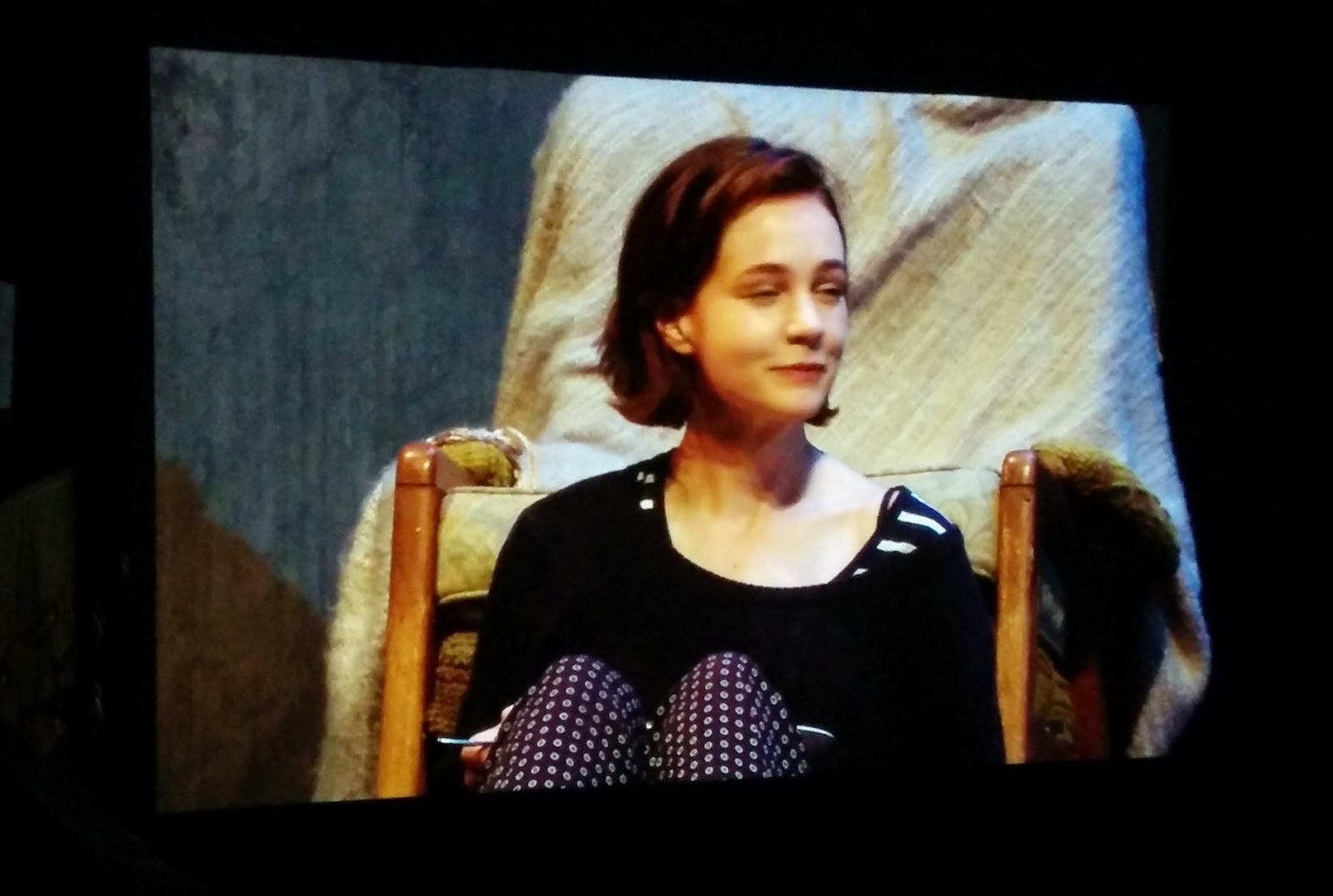 so- don't know if you will ever get a chance to see this play anywhere but if you do see it advertised - definitely worth seeking out a seat...

Volatile Chemistry in an Underheated Flat

"When acting is this focused, your own vision seems to improve miraculously. Watching Carey Mulligan and Bill Nighy in Stephen Daldry’s laser-sharp new production of David Hare’s “Skylight,” at Wyndham’s Theater here, you may feel you’ve been endowed with superhuman insight.

For what occurs with such seeming spontaneity onstage has to have been achieved with extraordinary care and full consciousness of the many levels, personal and political, on which this 1995 drama operates. “Skylight” is partly about our desire for ideal balance in our lives. Human beings being human beings, that’s impossible. But occasionally, just occasionally, it occurs in art.

In program notes, Mr. Hare writes that “Skylight” was his first play to be set entirely in a single room. But with “Skylight,” he demonstrates that close quarters don’t pre-empt expansive views. In measuring the distance that separates two people caught in an eternity of a single night, he also examines a dangerous gap that yawned at the center of British society when Mr. Hare wrote this play.

Of course, that’s essentially the same gap that the eminent Victorian Benjamin Disraeli was talking about when he wrote that his country was made up of the affluent and the needy. And few people in the United States are pretending that the same gap doesn’t loom just as large today.

In “Skylight,” the geography of these disparate nations is mapped most articulately by Kyra Hollis (Ms. Mulligan), a 30-ish urban schoolteacher, and the much older Tom Sergeant (Mr. Nighy), a self-made restaurant entrepreneur. Though they were lovers for six years, they haven’t seen each other in three, not since Tom’s wife found out about their relationship.

Now Kyra and Tom are reunited, in deep winter in her shabby and underheated London flat. Their sometimes anguished, sometimes heart-shatteringly funny, weighing of their inner and outer worlds translates into two impeccably chiseled hours onstage and a lifetime of pain and longing.  These two redefine the laws not just of chemistry but also of physics, with each coming across as both immovable object and irresistible force. I was always aware of how ineffably, achingly attracted each was to the other, and of the diametrically opposed ways in which that attraction became flesh.

Tom’s wife died the previous year. But he has been mourning the loss of Kyra, who was secretly his mistress while working for the couple’s restaurant business, for much longer. Tom has come to tell her that he wants her back.  The tidal pull of that wanting would seem destined to overwhelm anyone. But this Kyra is a formidably centered presence, the still counterpoint to Tom’s charming, full-court-press animation.  And what shades Ms. Mulligan, who at 29 bids fair to become the great British stage actress of her generation, finds in stillness. Sacrificing creature comforts to a life of social selflessness doesn’t come altogether naturally to Kyra, who (compared with the once “bog poor” Tom) grew up in relative affluence.  Mr. Hare wants us to know that morality is never purely instinctive but a conscious choice, an act of will. And Ms. Mulligan makes us privy to every atom of strain that Kyra feels in making that choice. She responds to the tug of Tom’s charm. How could she not, as Mr. Nighy plays him? On some level, we want her to give in, so that whenever she shows signs of doing so, we melt.

The friction and the possibilities of fusion between Kyra and Tom — who must be together and cannot be together — make “Skylight” one of the most intelligently sentimental love stories of our time. Detailed arguments about the sin and the necessity of capitalism are as organic to this play as lines that might have come from a latter-day version of “Casablanca.” (There’s even a variation on “We’ll always have Paris.”)  We know which side of the divide Mr. Hare comes down on. But it is to his credit, and to that of this nigh perfect production, that as long as we’re watching “Skylight,” our sympathies are always torturously in flux. Be ready to cry. The thinking can happen later."

Photo from the NYT review- 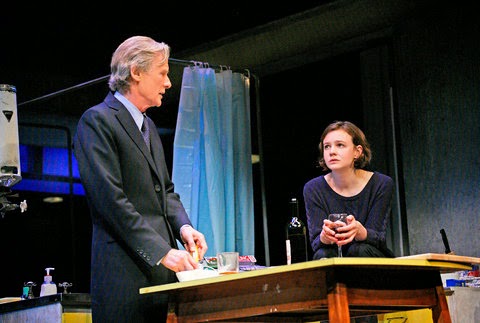 Phil and I disagreed about the "post evening future for Tom and Kyra with each of us envisioning "the ending" differently... and you will just have to seek it out to find out how you would predict the outcome for these two strong people.....
Posted by TOR at 3:24 PM