set the way back machine....

The last time I was at the Seafood Shack on the Inter-Coastal Waterway in Cortez Village was some time when my dad was still alive and still going out for lunch.  He died in September of 2001.  So let's just posit that I haven't been there in say- 15 years.  Last year when Tide Tables opened I got to talking with someone about the decline of the place and was told that it had recently been sold and the new owners were looking to bring it up in the world of dockside dining in Cortez.  The location is fabulous: right at the landside end of the Cortez Bridge to Anna Maria Island (AMI) with wonderful water and sunset views (especially from the upstairs "finer dining" part of the place).  So we had decided to give it a try- Let me digress- we had also earlier in the week decided to give the Cortez Clam Factory a try too - which had been recommended by some folks we met at the Blues Festival last weekend.  I have no photos- which is kind of a shame because the place was a dive dive dive bar - with smokers and gambling machines LOL- I didn't even know indoor smoking was allowed in Florida... and last weekend when we had dinner at the SOB Bar & Grill the smokers had to go outside- but here they all sat puffing away (and all I could think about were the last 18 months of my sisters life as she died from lung cancer- which put me off the place right away.)

The ribs, which were smoked right outside, were pretty good and the service (one guy handling the sizable inside business) was impeccable- friendly and helpful.  But it was definitely my first and last visit there. I don't need to be reminded of my sister's months on a ventilator or her hair falling out or any of the other torture she underwent when the medical/industrial complex failed to give her the realistic picture of surviving Stage IV lung cancer that had metastasized to her brain...  I am really willing to skip that, along with the right wingers loudly arguing about (believe it or not in a public venue) the "negroid president" - I kid you not, this place was an unbelievable step into the world of hate that drives the right-wingers today and one I will not be repeating.

But back to my review of today's choice: we have been trying to check out some new places this winter - and some will be winners and some losers and some in between. Today's place was on its way to being a winner.  They are undertaking a big renovation and the upstairs "fancy" restaurant is closed until February but the downstairs grill and bar are open even during the remodeling. The server was excellent and very helpful in selecting things that they make on the premises.   The food was served fresh and hot.  While we did not stretch the limits of seafood shack type food - everything we had was good. Phil had the grouper sandwich and I had the blackened grouper tacos.  My tacos were at least twice as good as the ones I had the other night at the Sand Bar (when the grill failed at our house and we had to go out last minute and found the Sign of the Mermaid closed and AMOB having a private party.)

So the review is GIVE IT A TRY- they are excited about their new patio (to be completed this weekend) and very very nice as well as having good bar food style seafood... 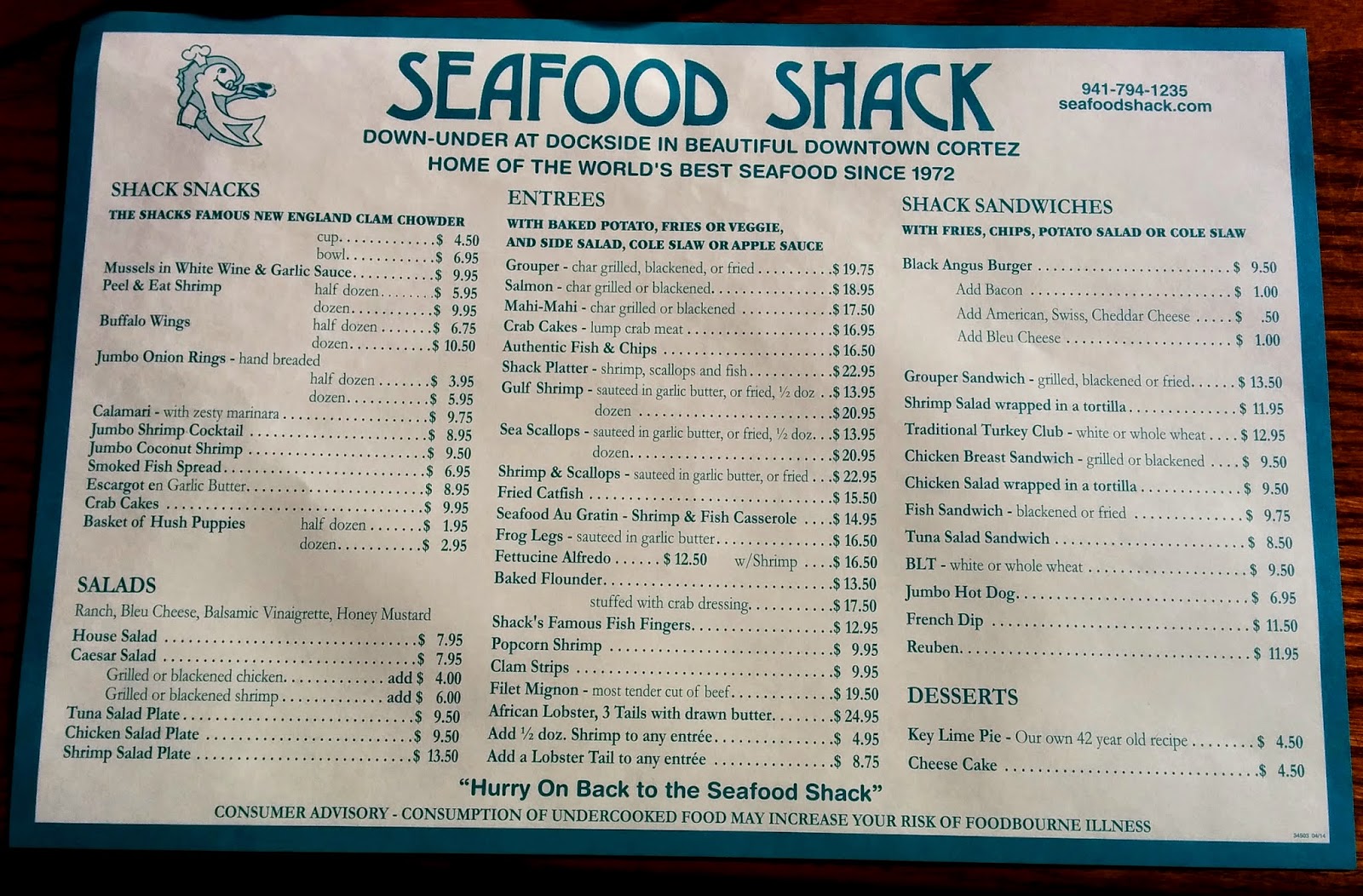 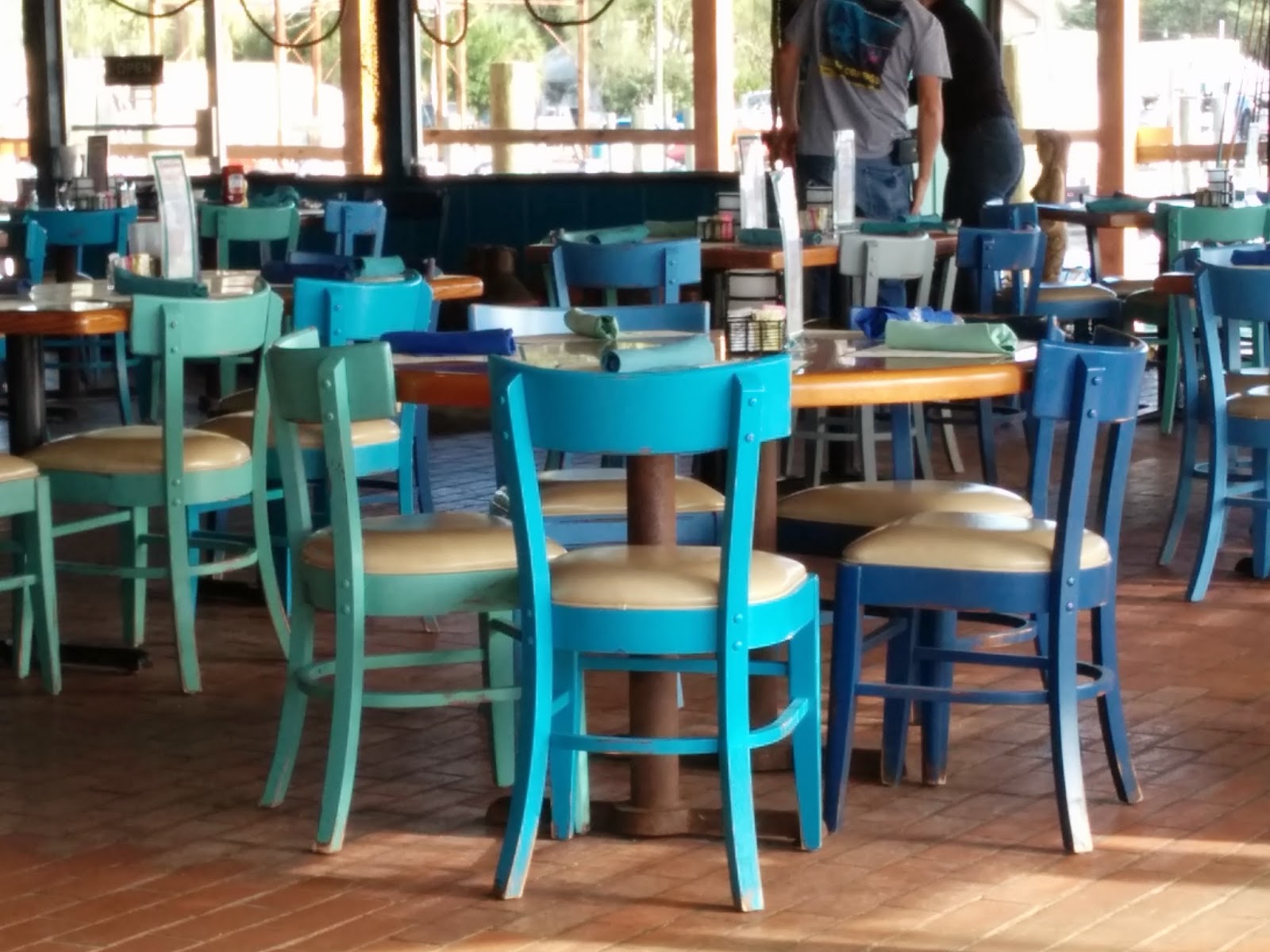 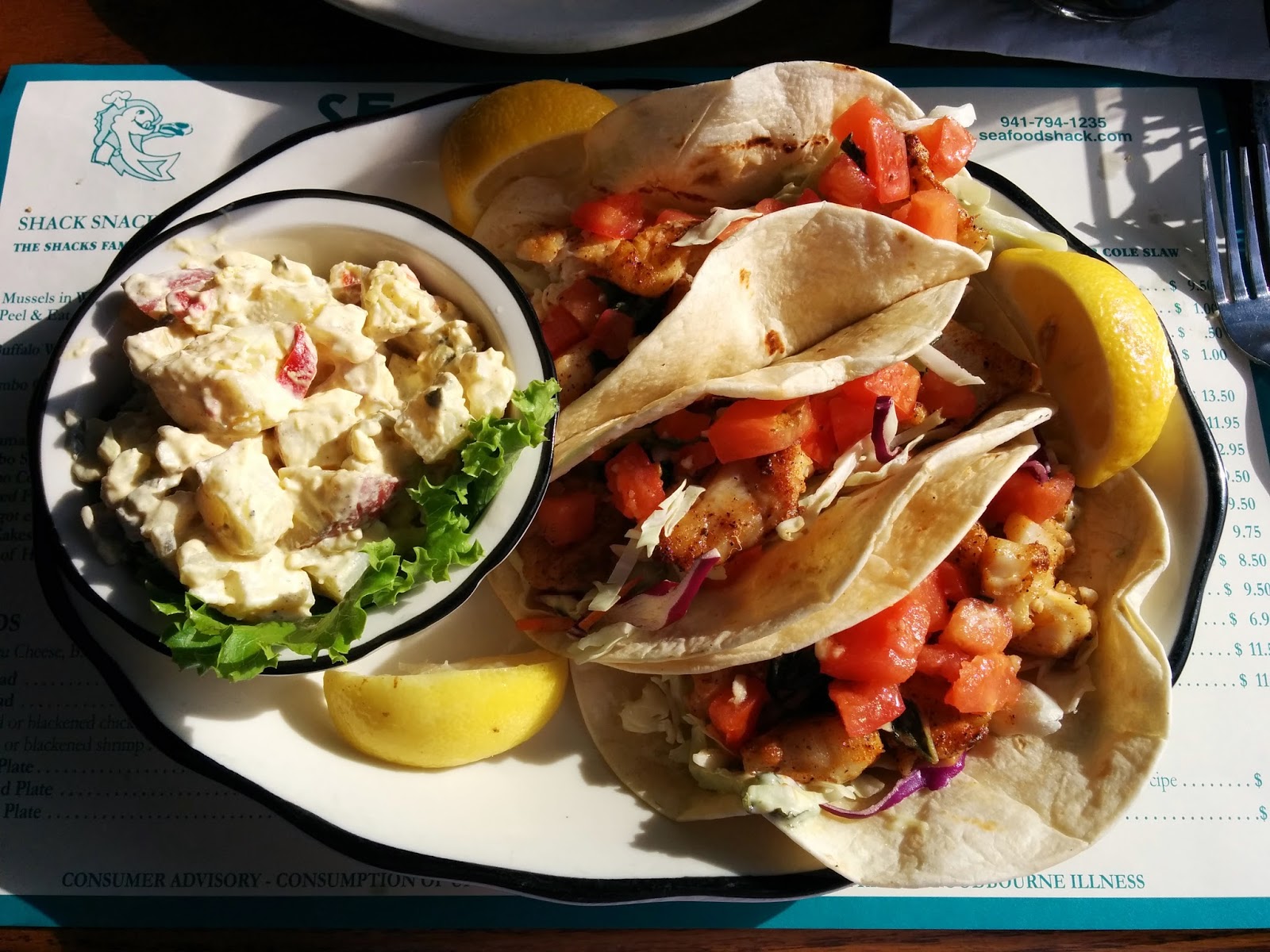 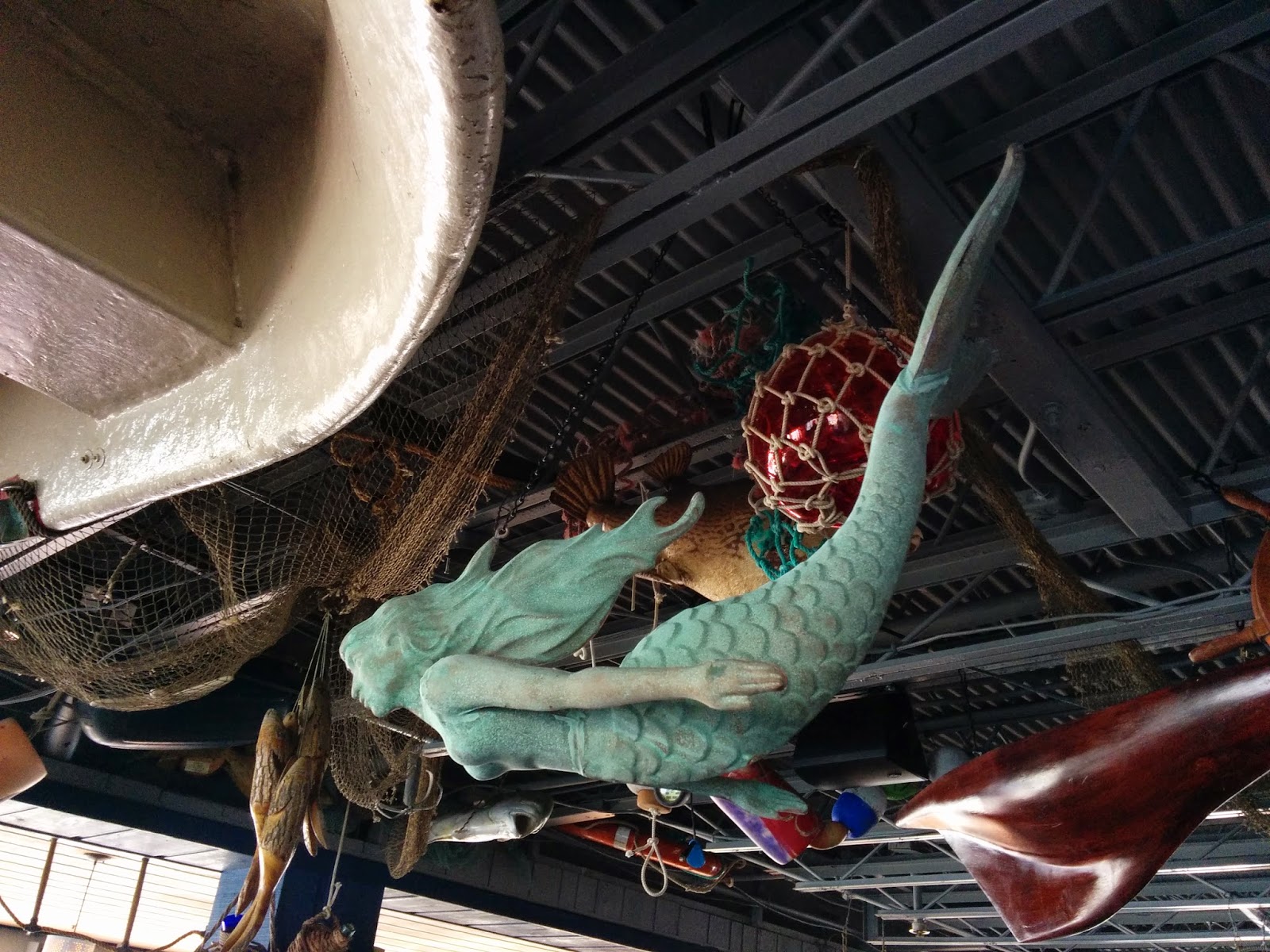 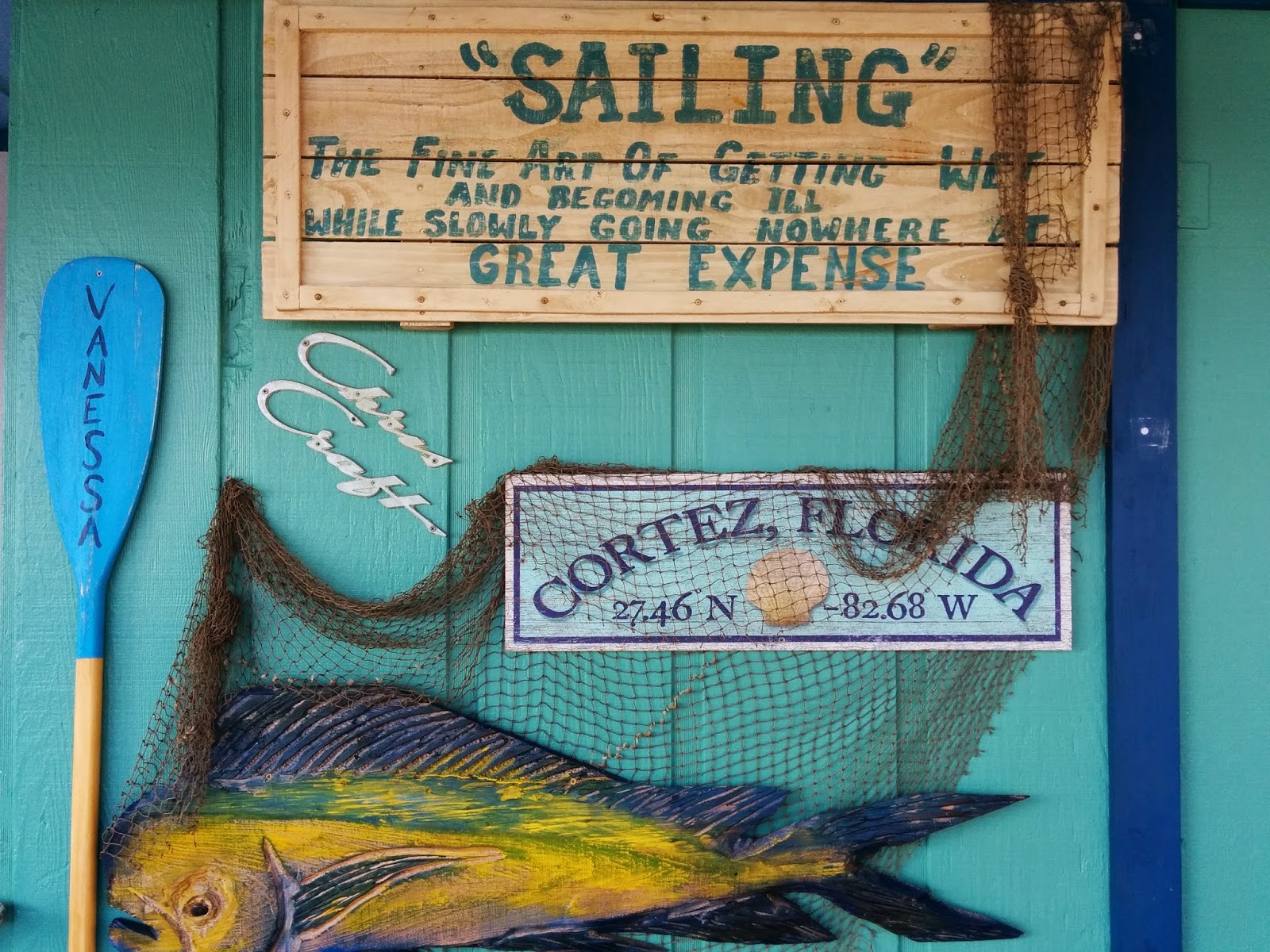