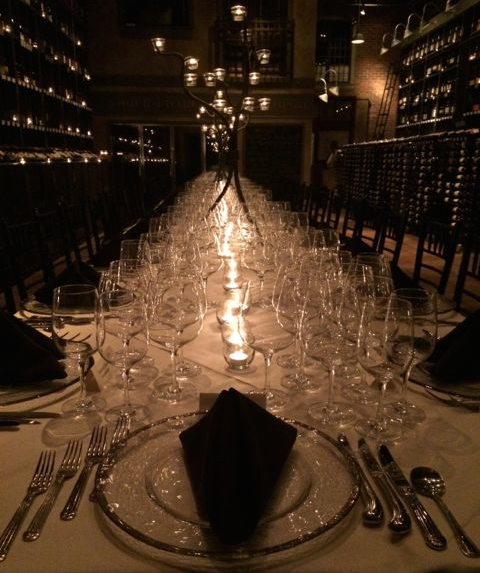 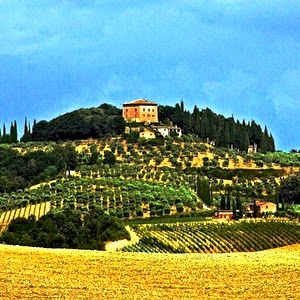 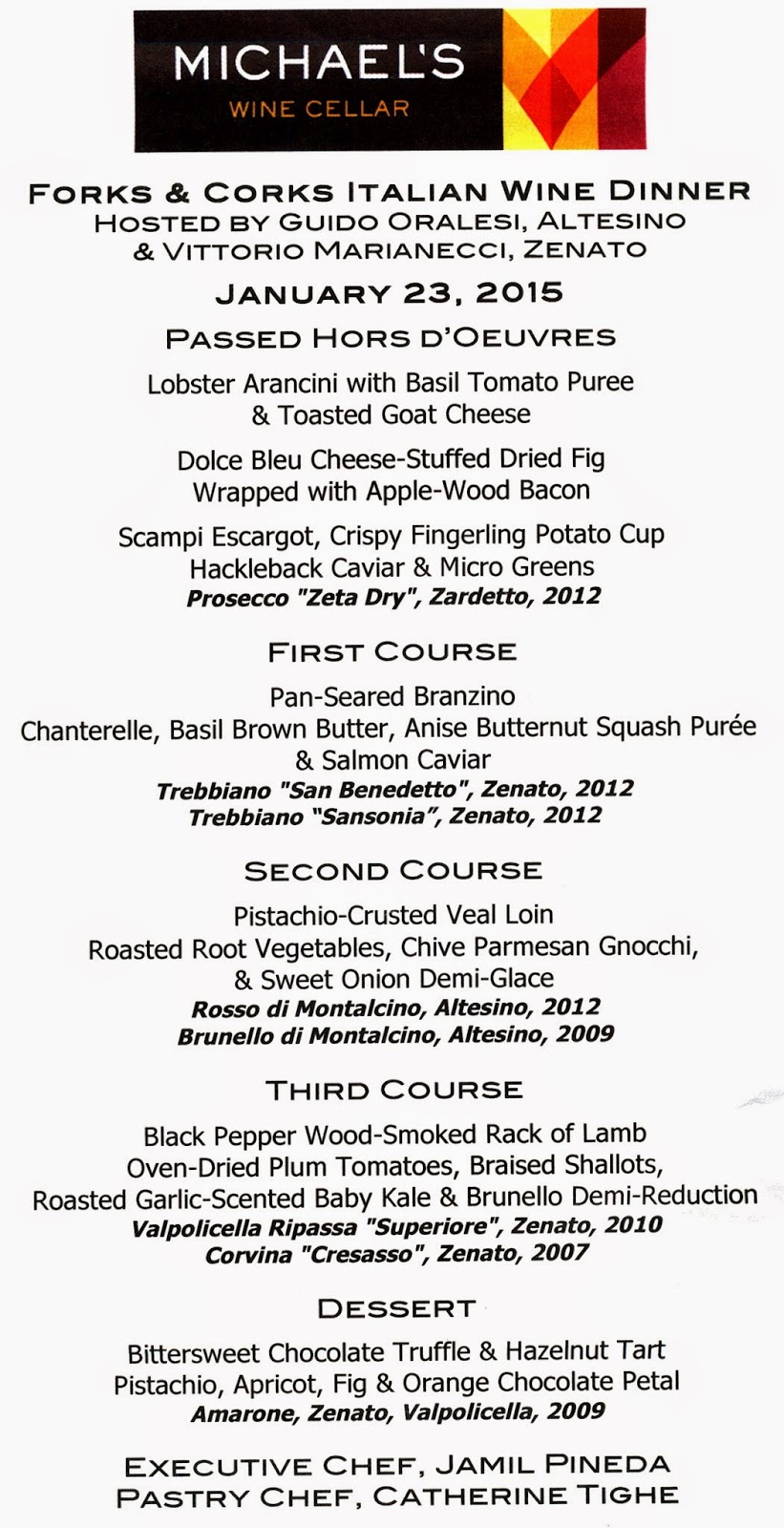 So off we went - and here is the report... passed starters were OK- nothing jumped out at either of us- although I favored the figs (what else is new?)

the room was quite full but oddly- since we go to pretty much every wine dinner Michael's has - we didn't see more than two or three familiar faces... 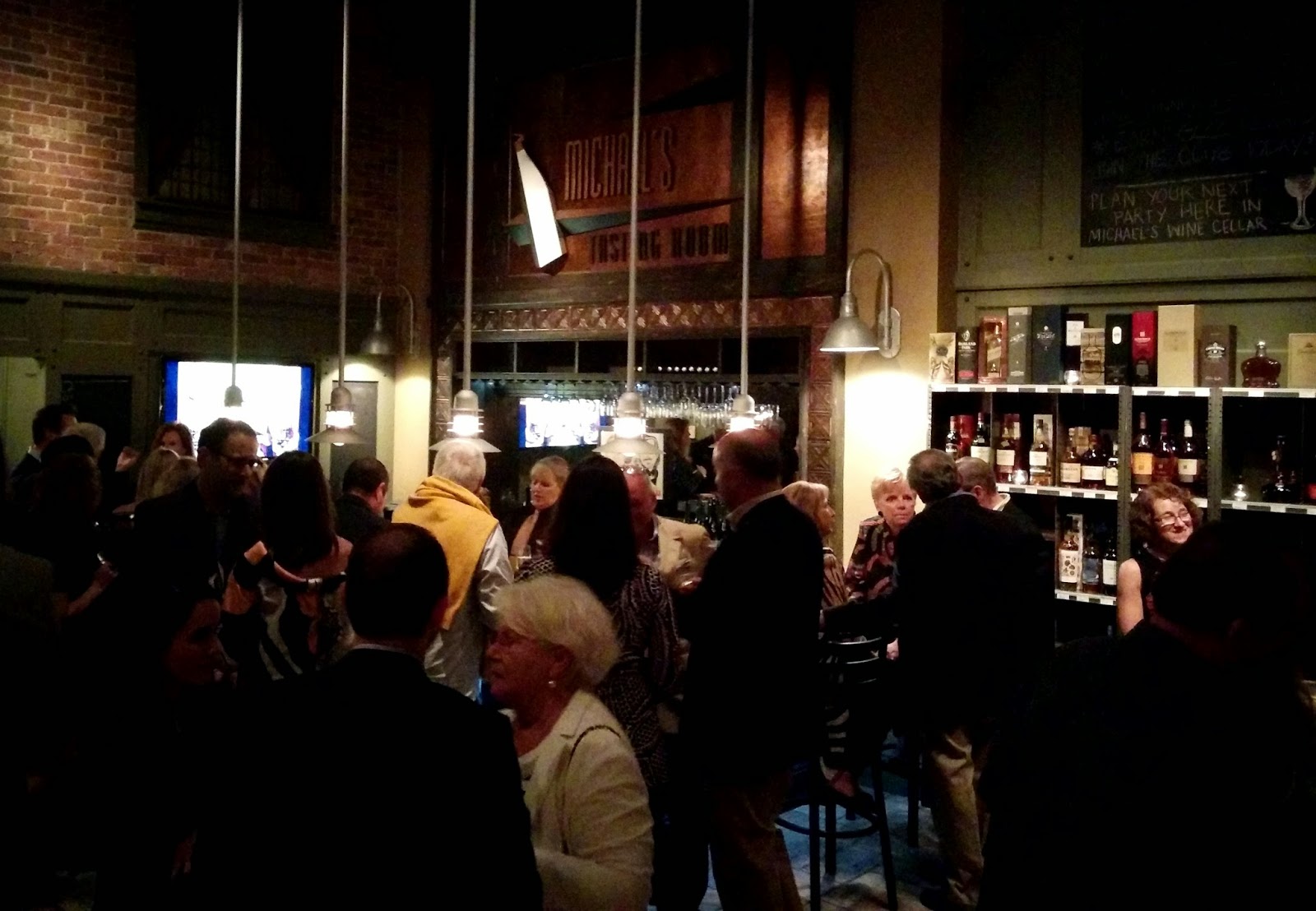 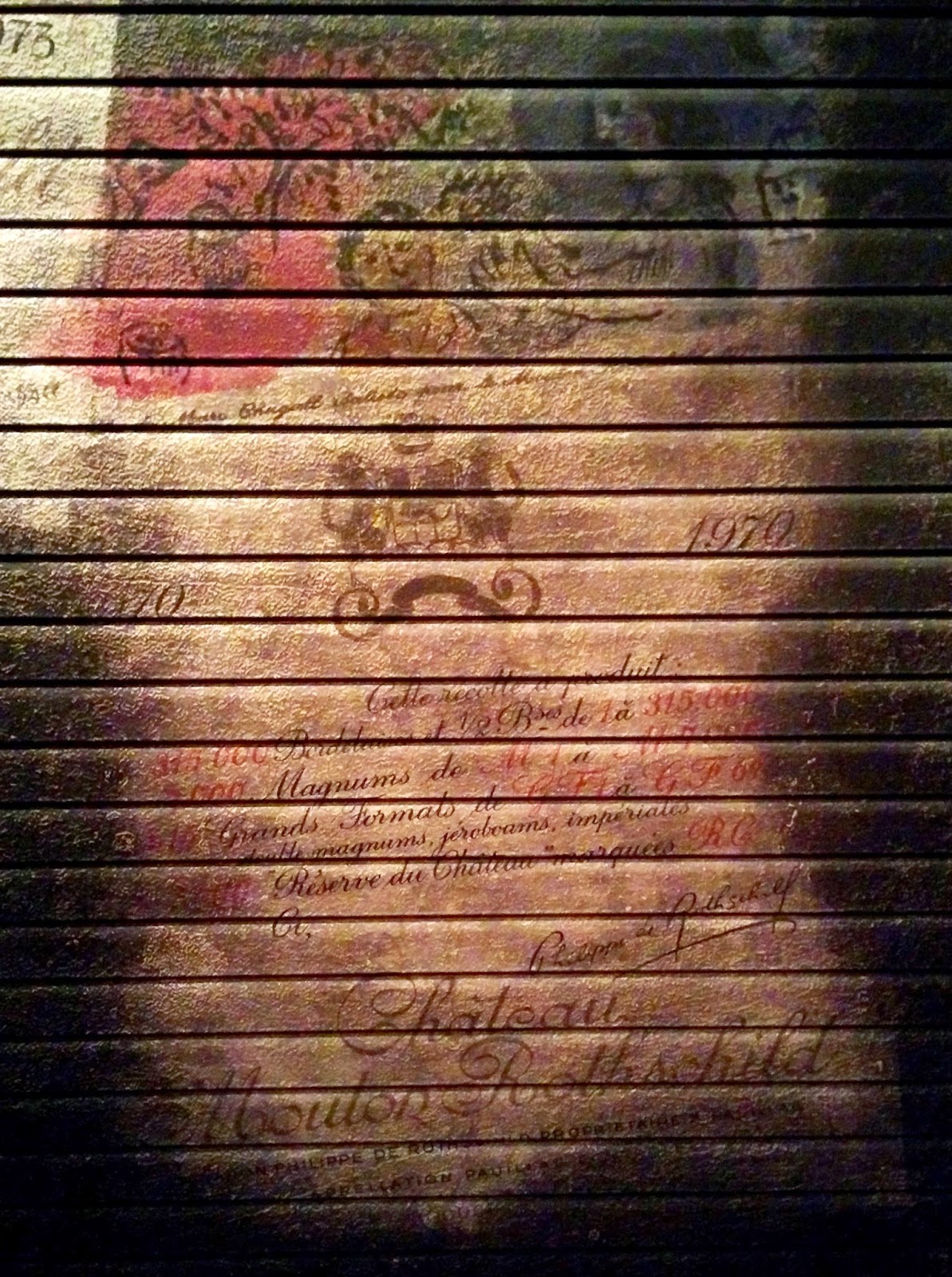 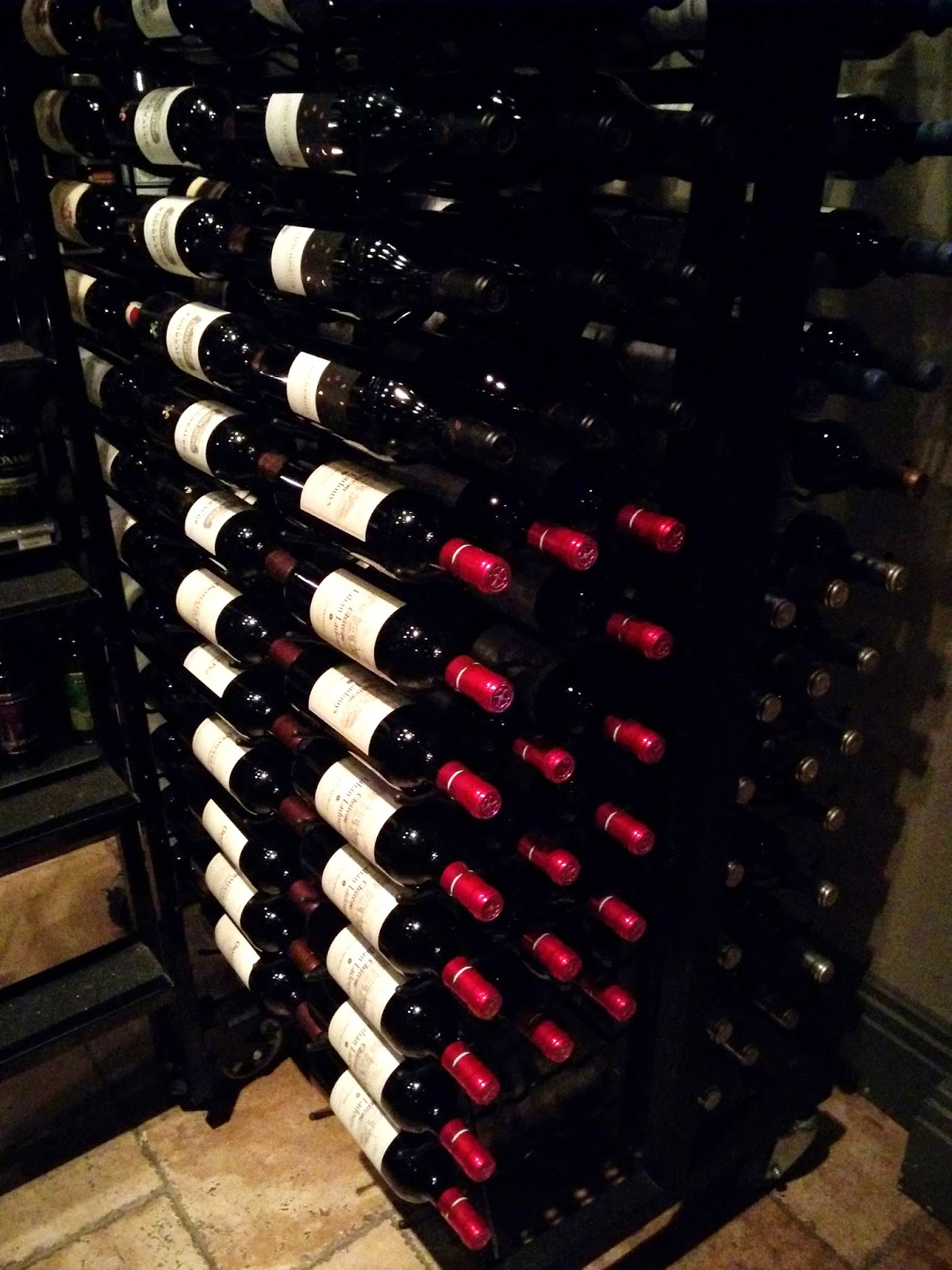 here are the wines for the evening- 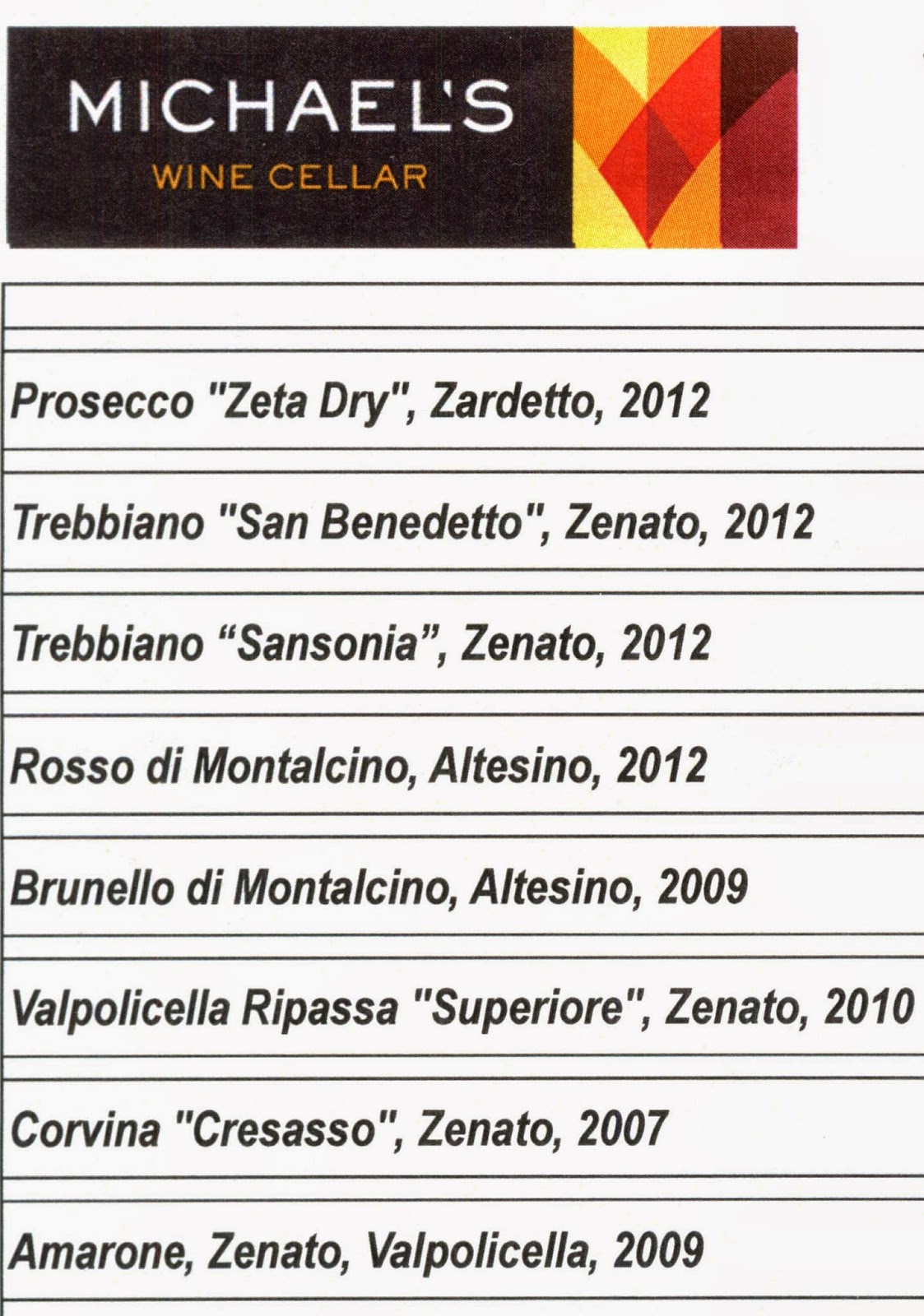 they opened the cellar dining area and as usual - it was magical with all the candle lights and glassware and those fabulous glass chargers which protect your menu from staining or crumpling- could be among the best inventions ever! 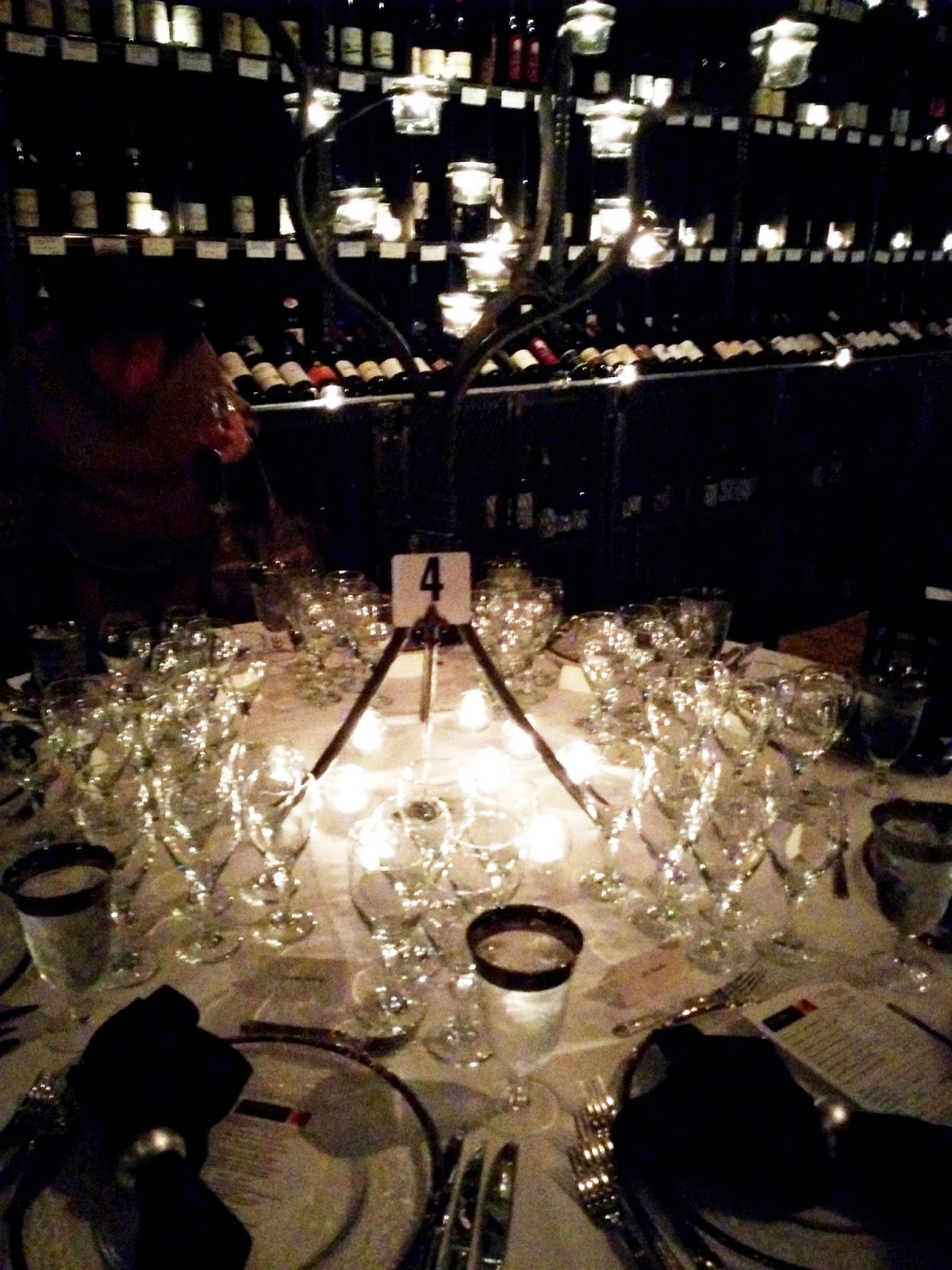 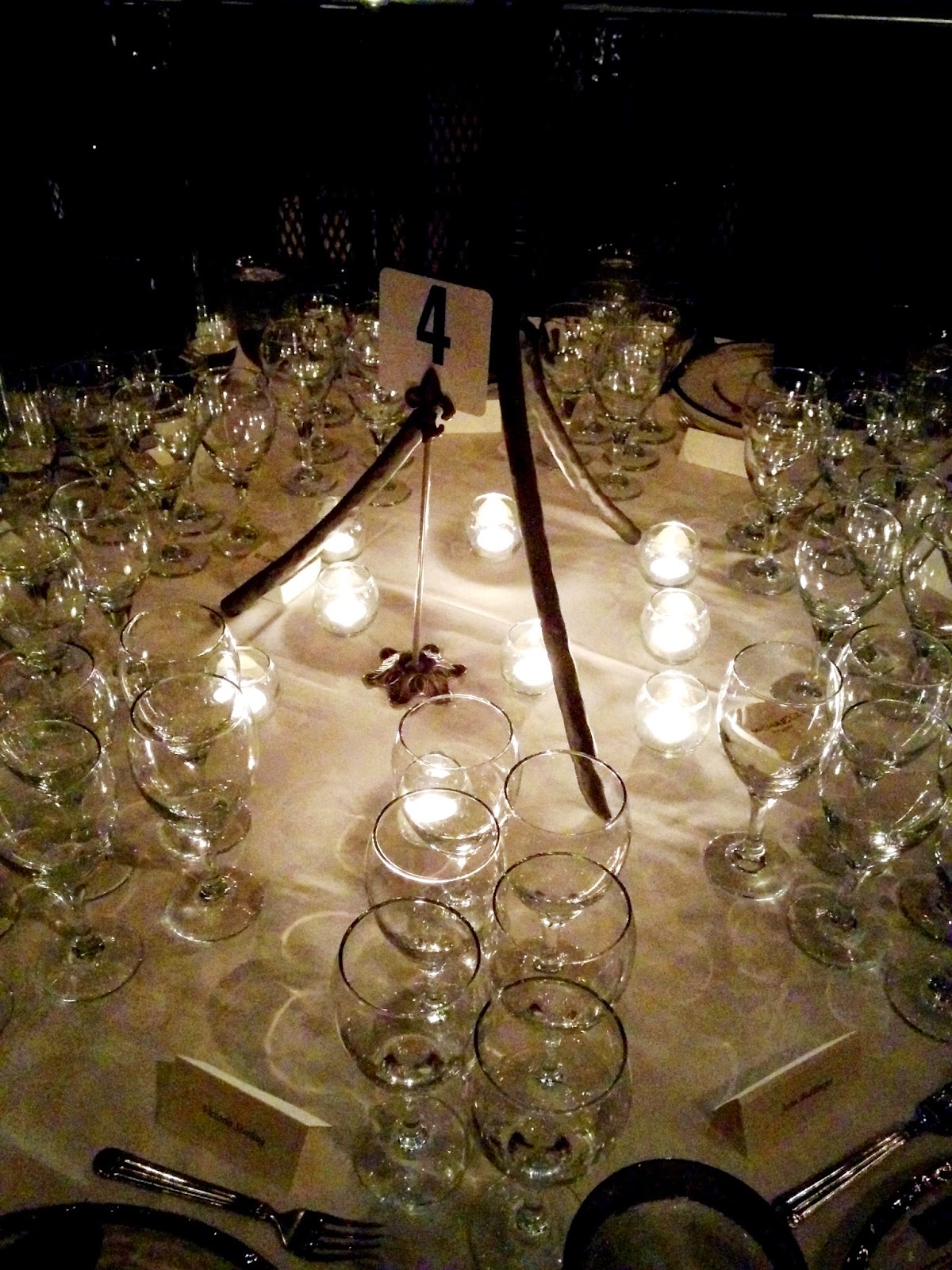 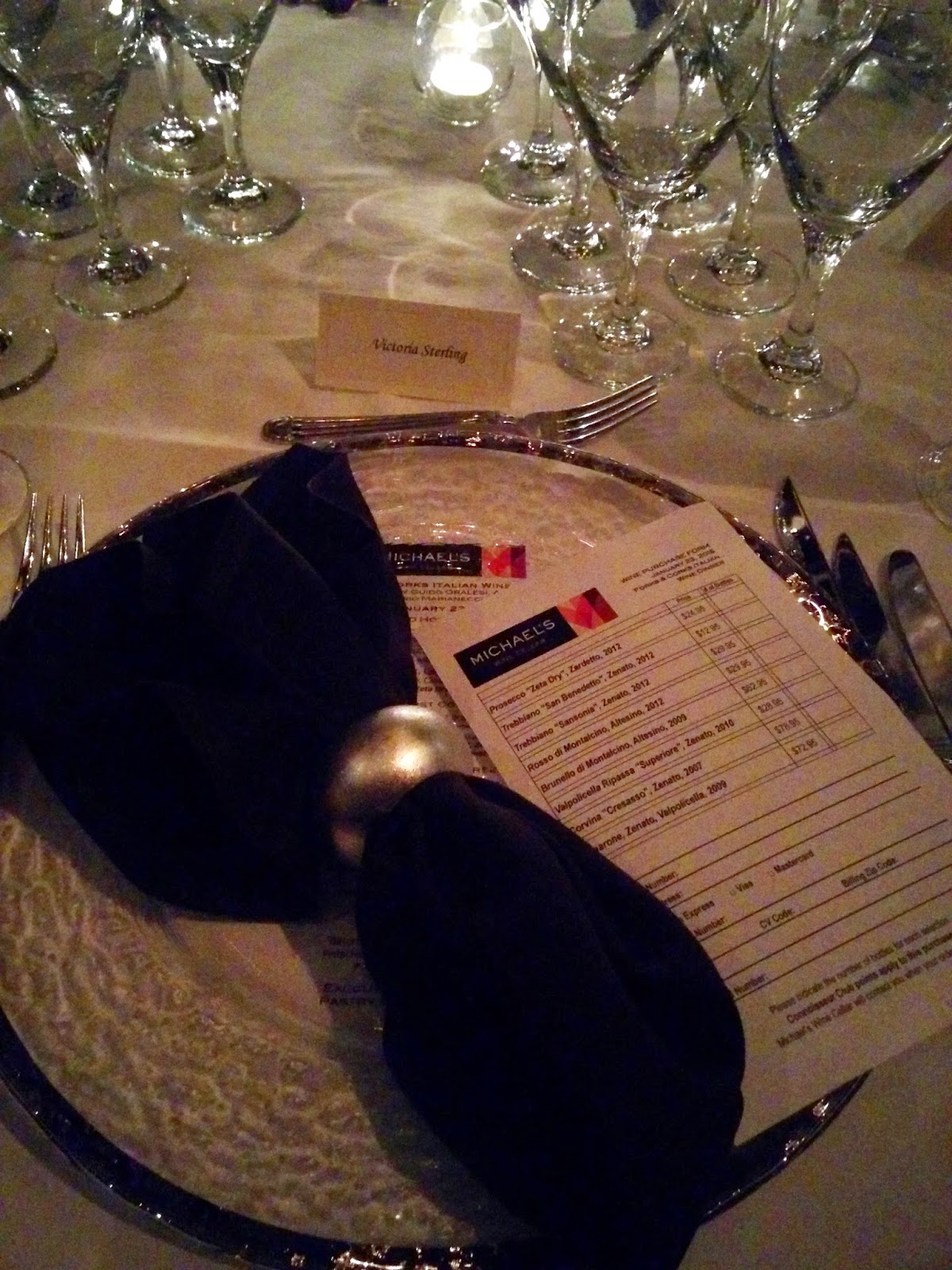 wines at my place setting mid dinner- I had finished one of the Trebbianos and the first two reds were poured... 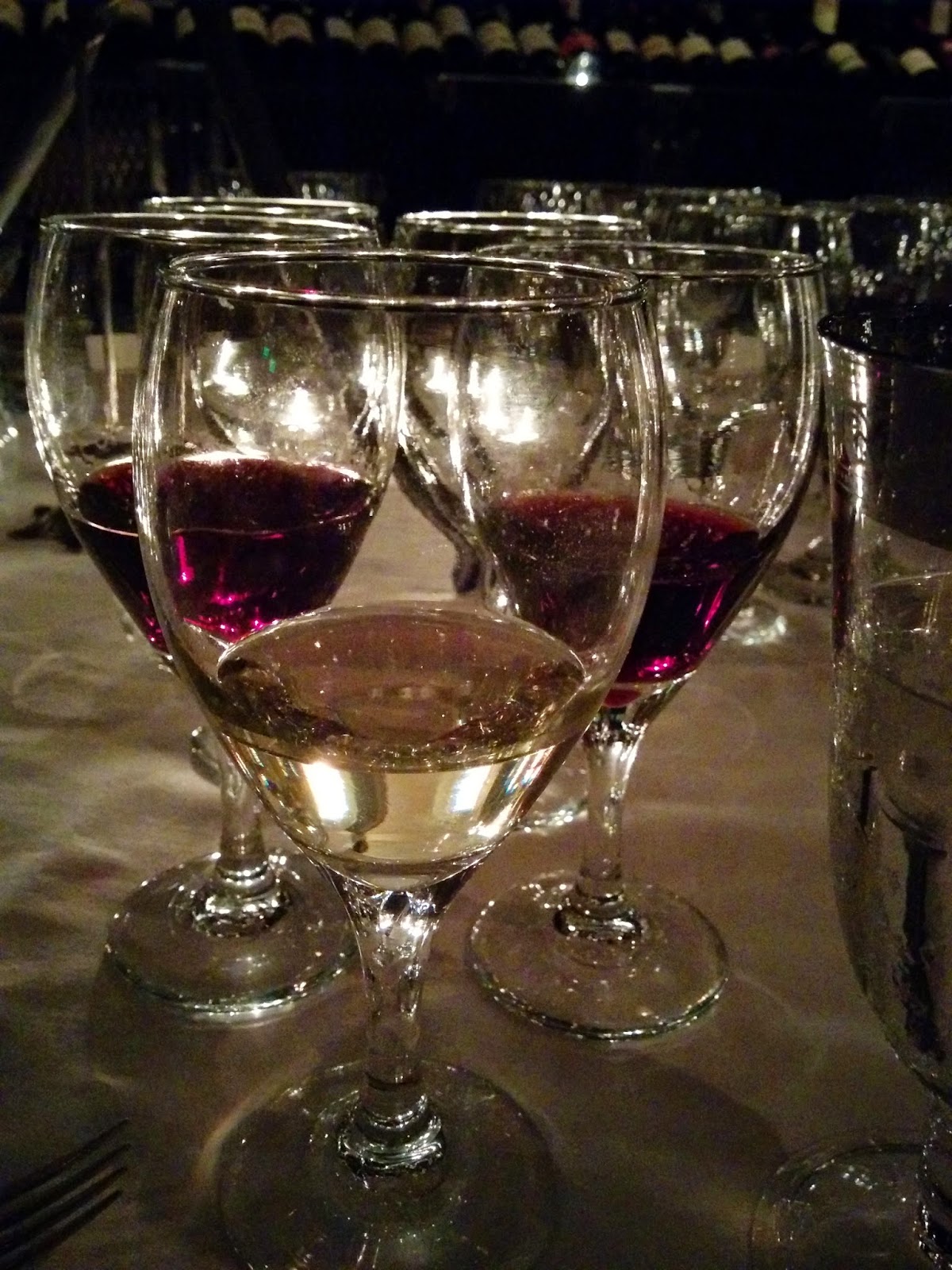 my favorite course- the branzino- every element was perfectly balanced and it showed off the wines very nicely as well- bravo Jamil!!! 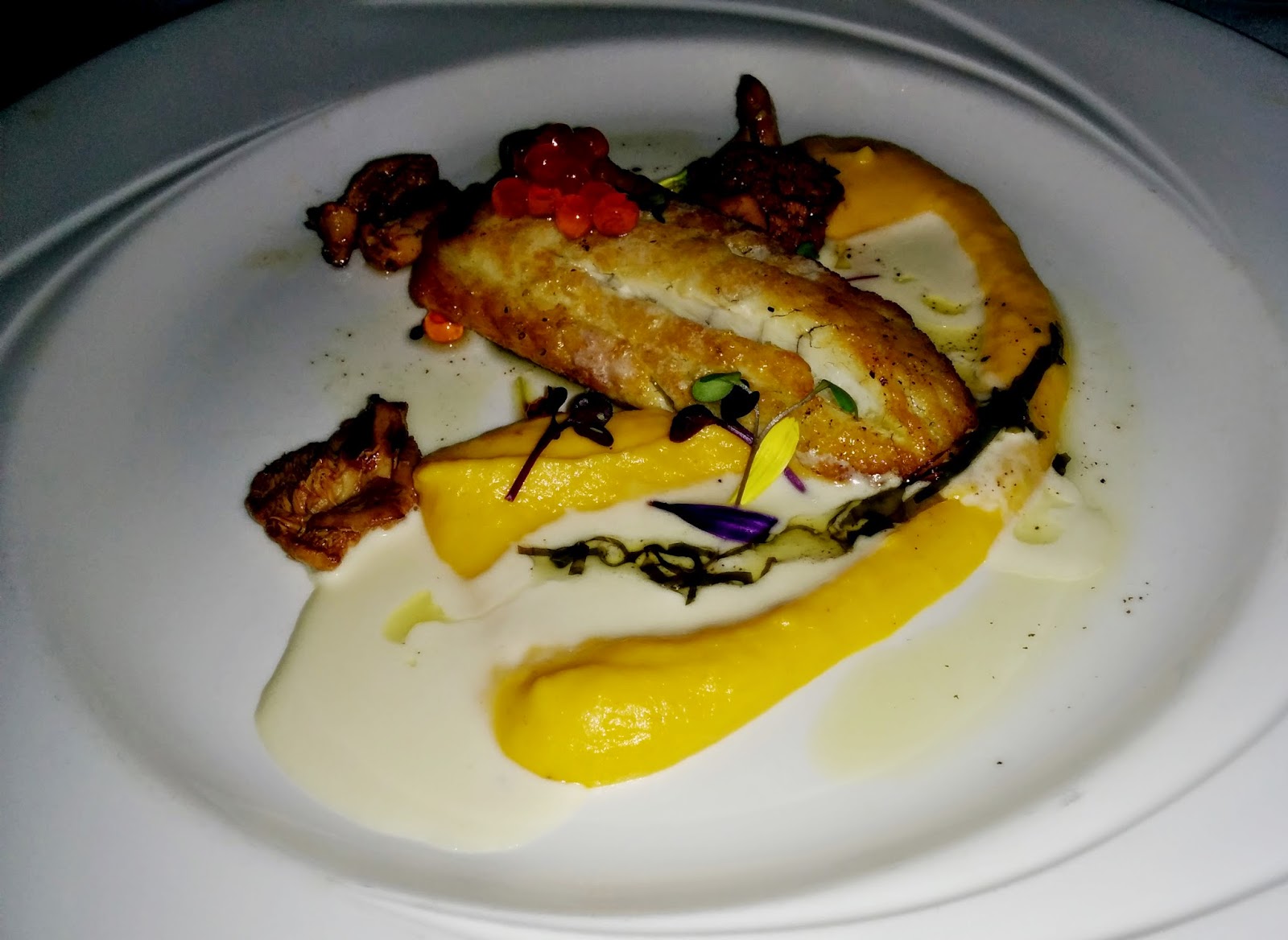 I missed getting a photo of the veal loin - which came in a magnificent sauce and had amazing little gnocchi surrounding it- I am so sorry you can't see it- (oh well :-( ) good news I got extra because of the deal we made about the lamb course....

then the lamb course -which Phil and I had agreed he would eat since I am no fan of lamb- Phil felt the wood smoke flavor was too heavy for the dish, even though Jamil usually has such a light touch... 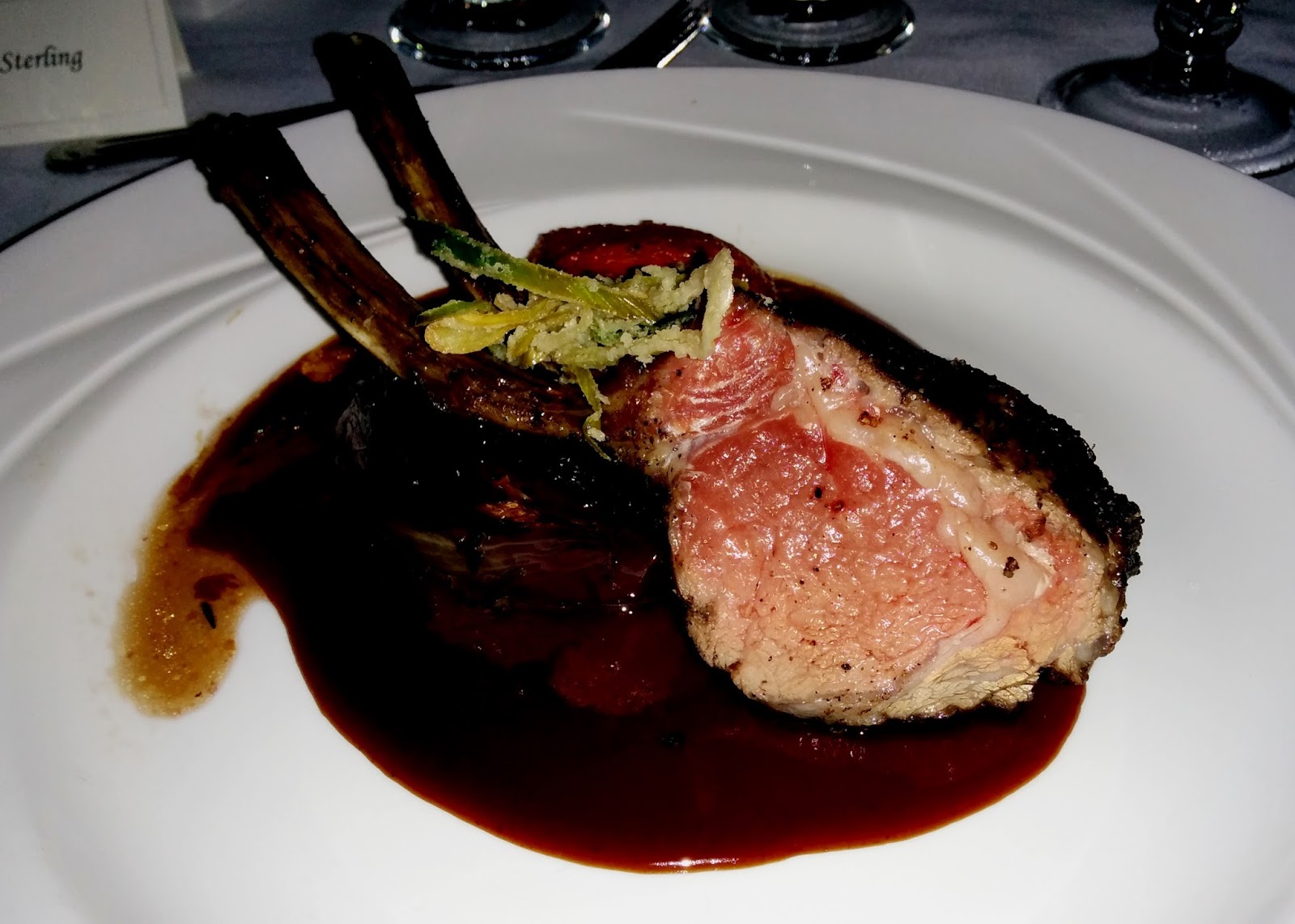 the dessert was exactly the one Phil is always hoping for- too rich for my taste but he loved every bite! 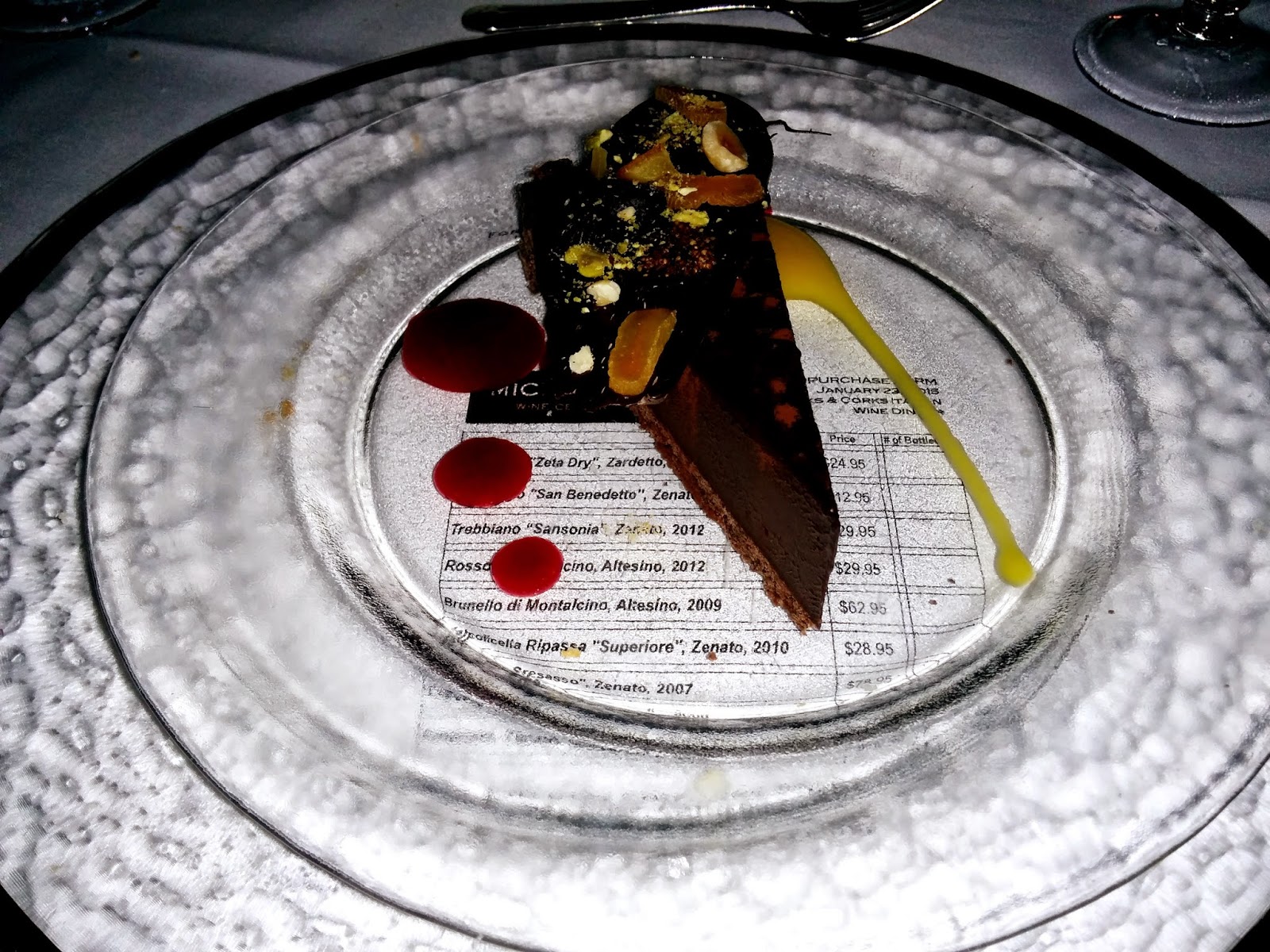 we got to sit at the table where the Altesina wine rep was seated and really enjoyed his company.  Michael and Terri Klauber were also at our table but being the host and hostess of several events the same evening were not able to spend much time there.

Since we are headed to eastern Europe in the fall I asked both Guido and Michael if they knew anything about the wines in Moldova - and while neither of them professed any knowledge Michael did say we should look at the various wine regions in Italy and follow the latitude around to that side of the Adriatic and further to the Black Sea to get an idea of what to expect in macro climate and work from there- which made sense to me.

And just because this post is about dinner at Michael's I am going to post from our Tuesday night dinner at the restaurant-  where Phil ate the Chinese Epicurean menu and I ordered off the regular menu and as usual had a perfectly executed meal. Both our wines showed well and Justin was attentive in an unobtrusive manner... what more can you ask from an evening out? Not a thing! 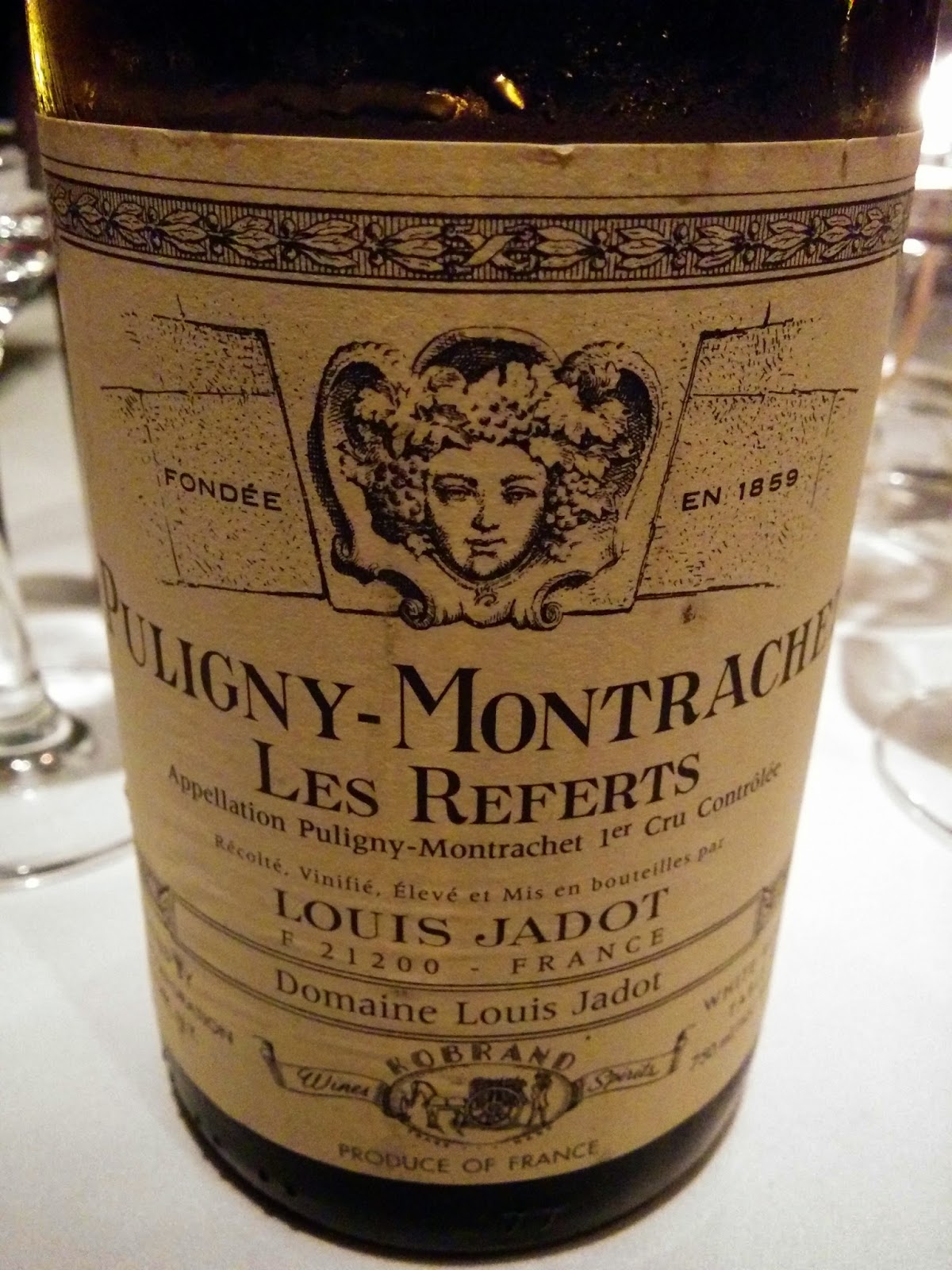 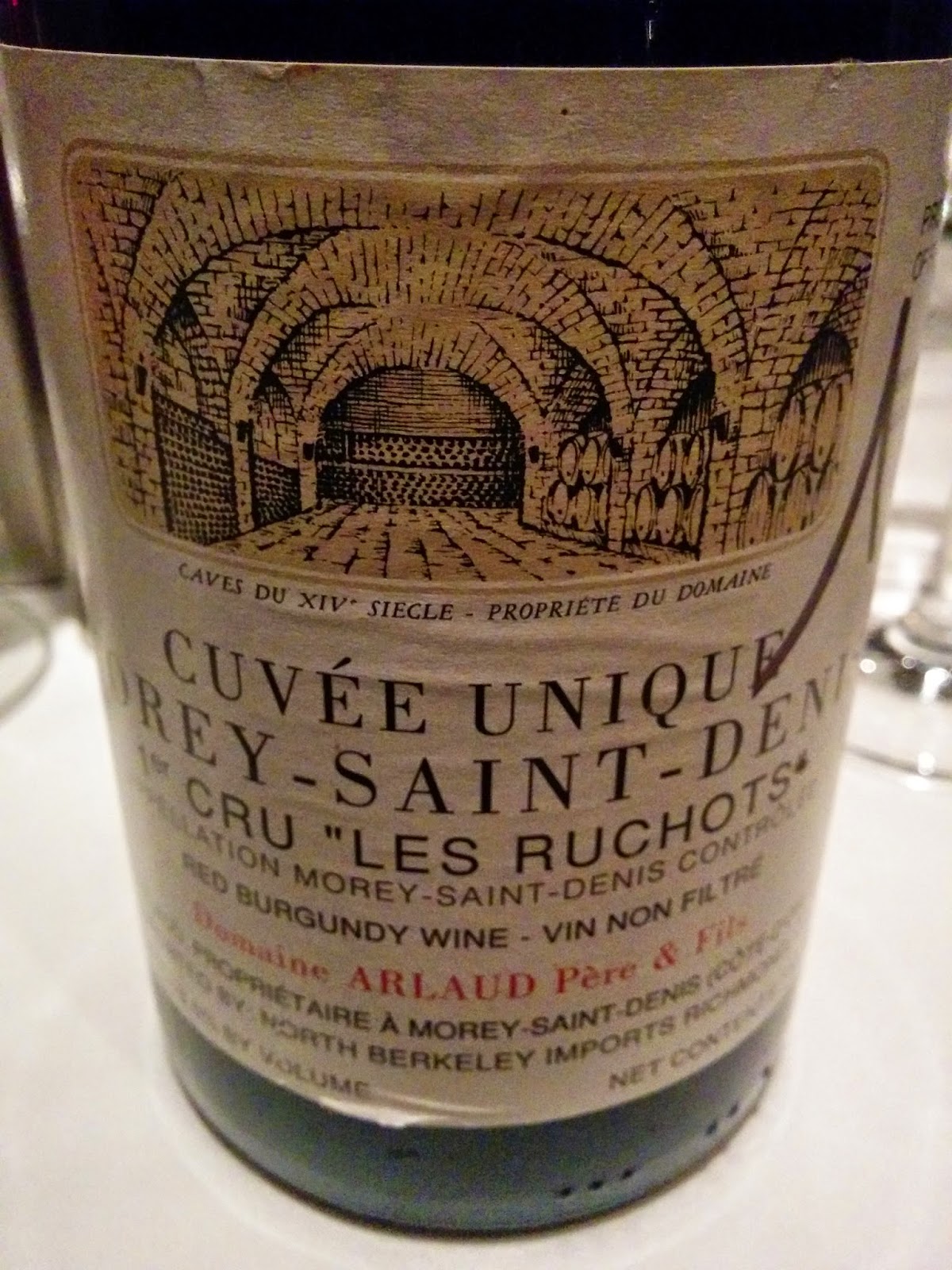 we shared the seasonal salad with figs and blue cheese and candied pecans! 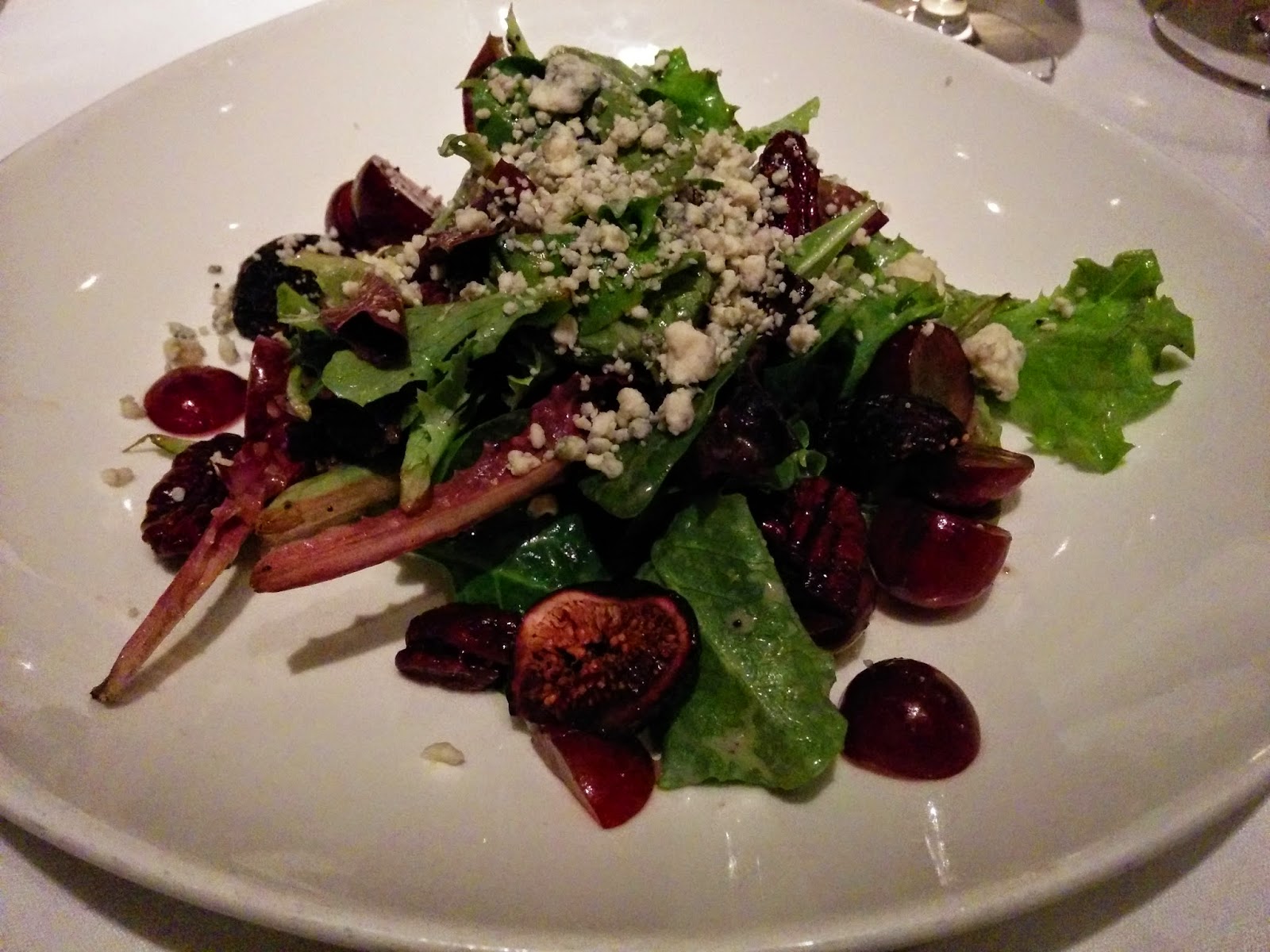 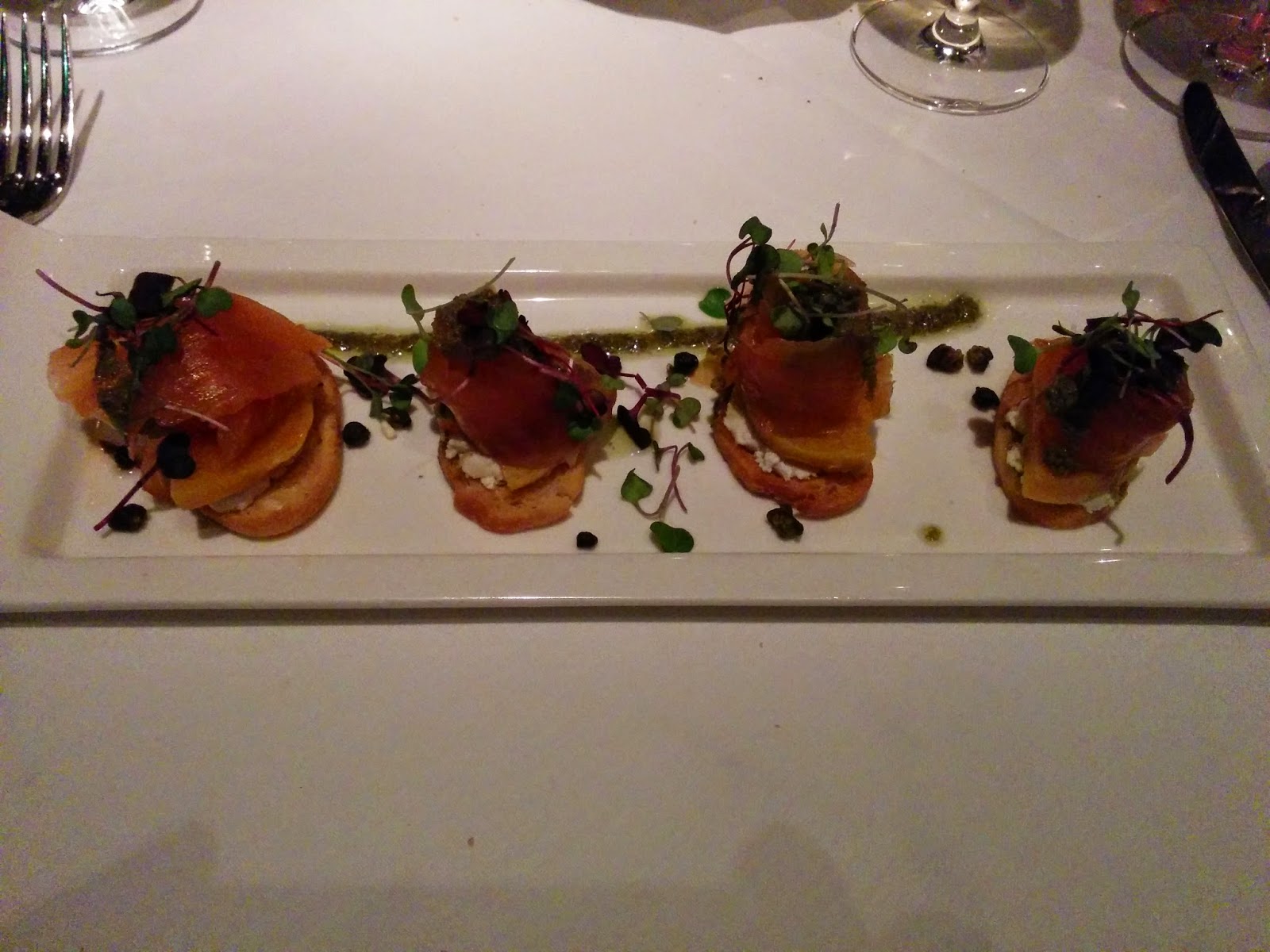 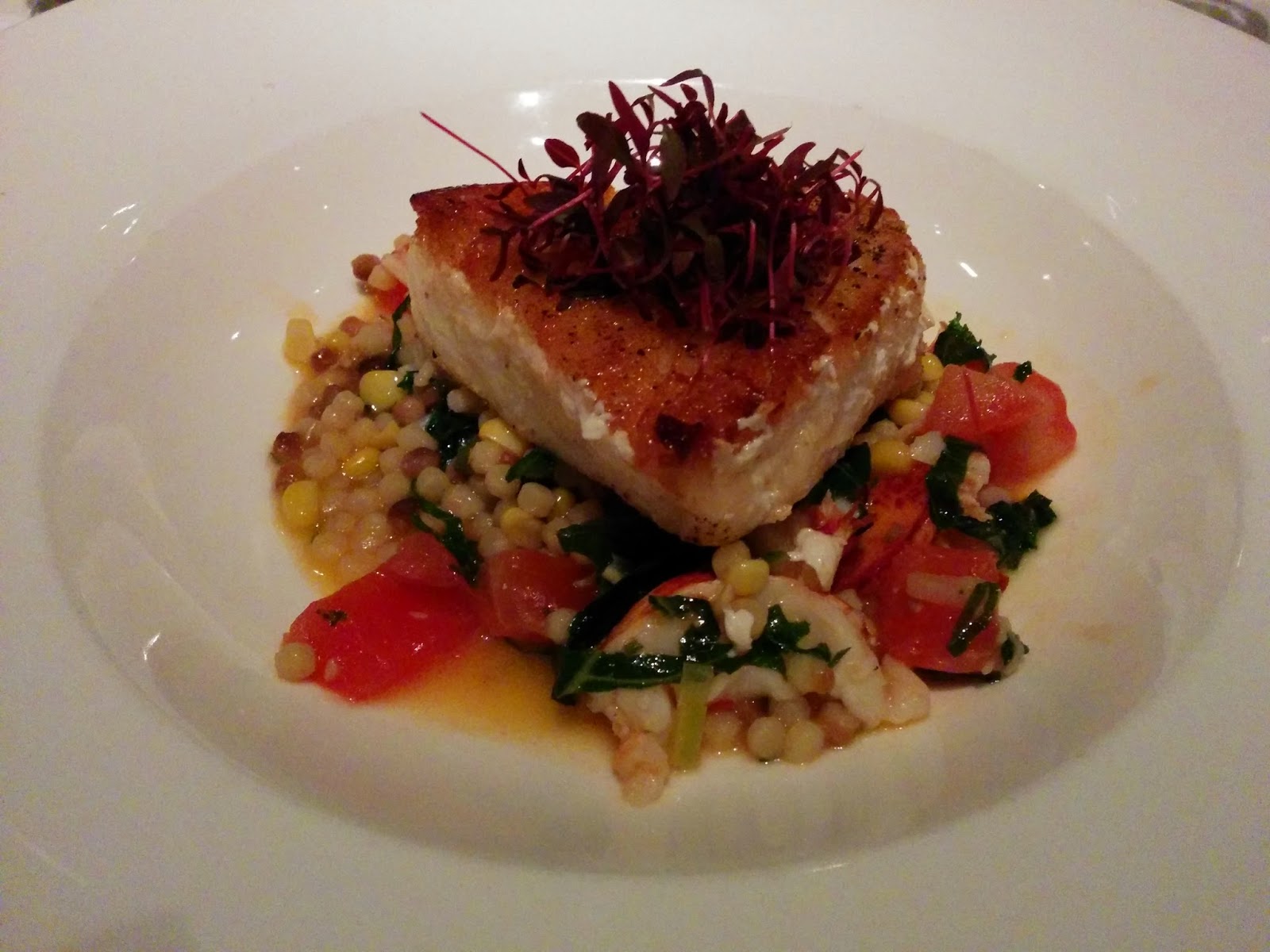 I gave half of this HUGE HUGE HUGE ice cream cake to Phil but it was still too much! Loved every bite! 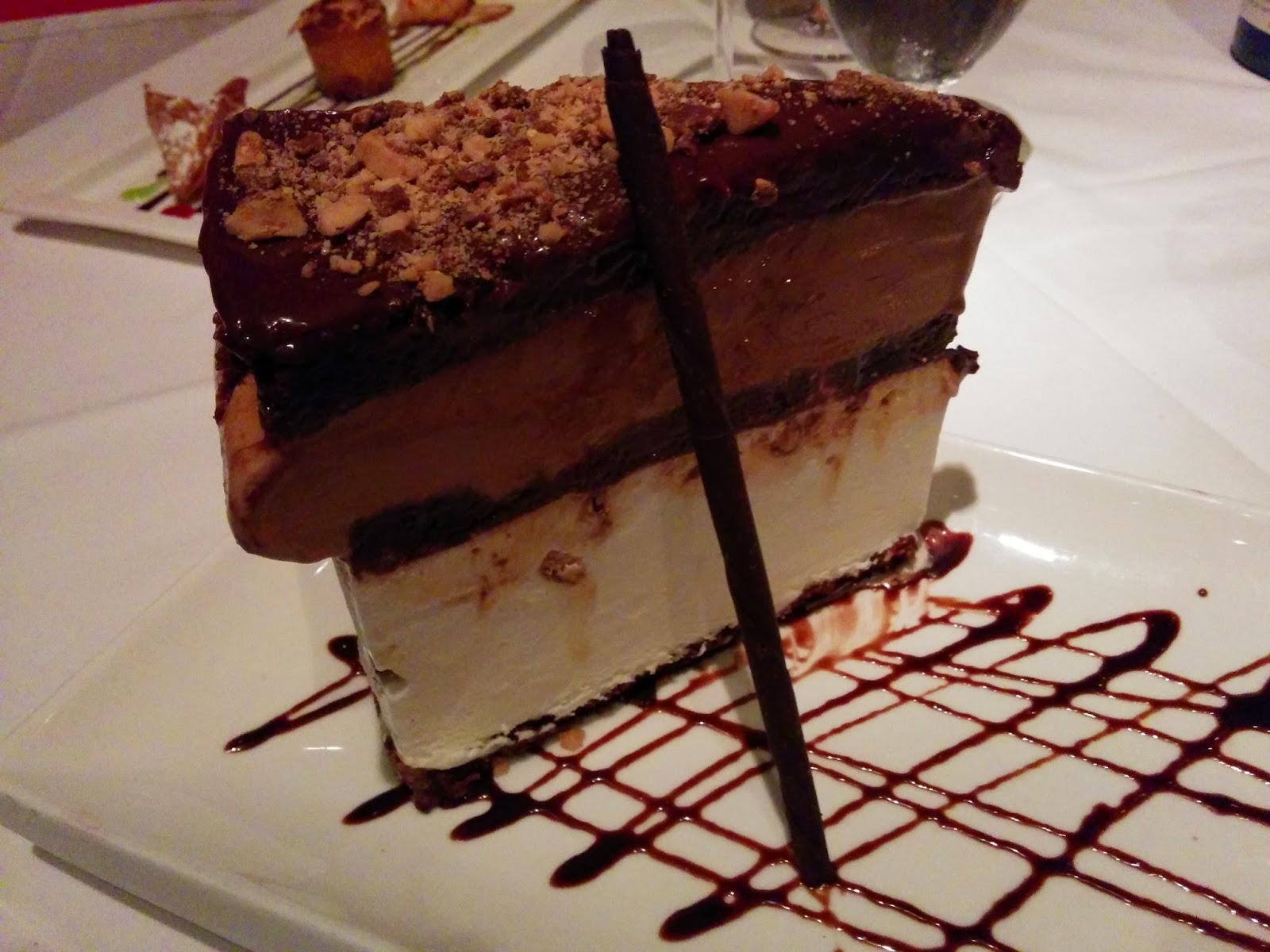 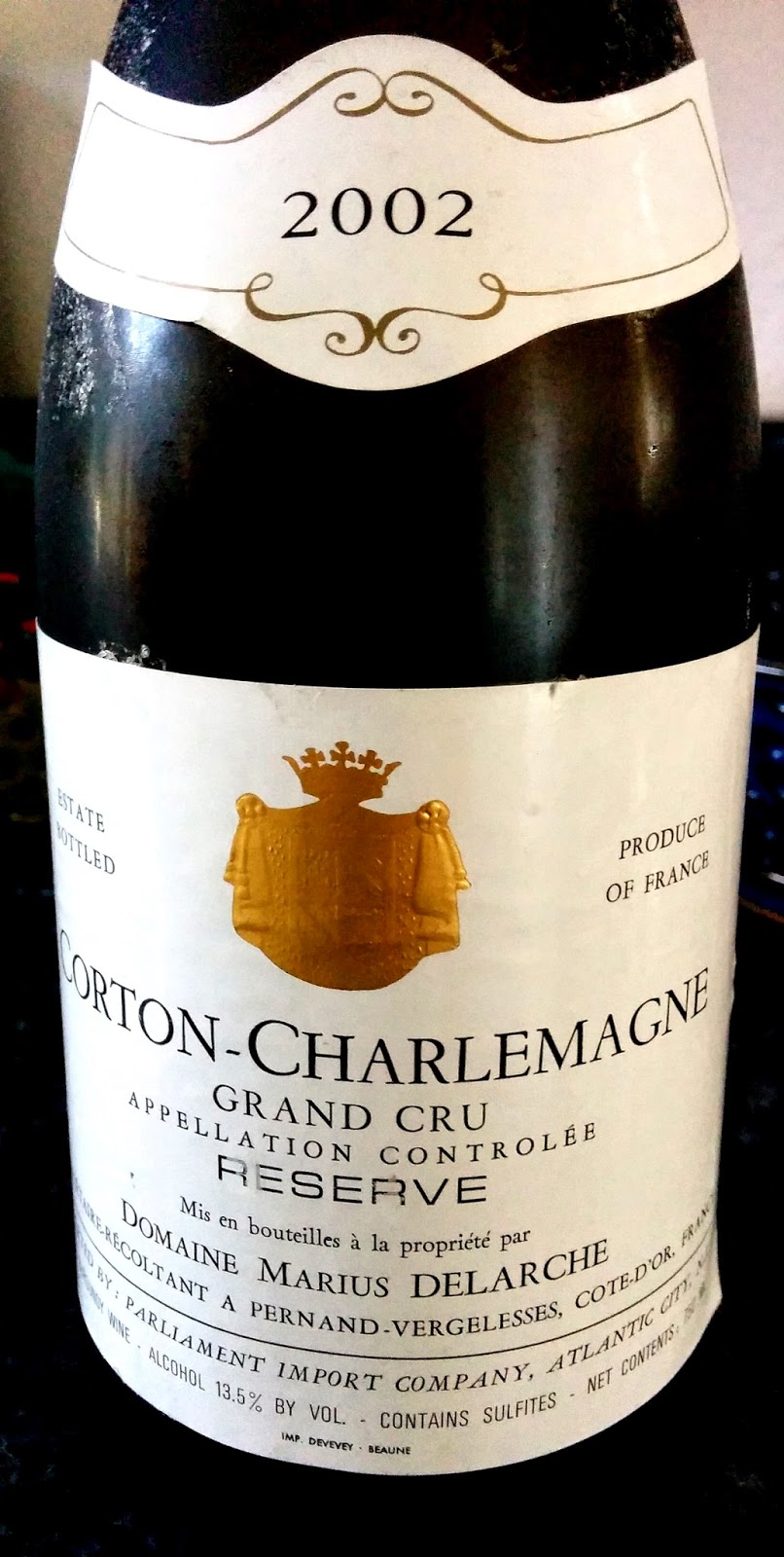 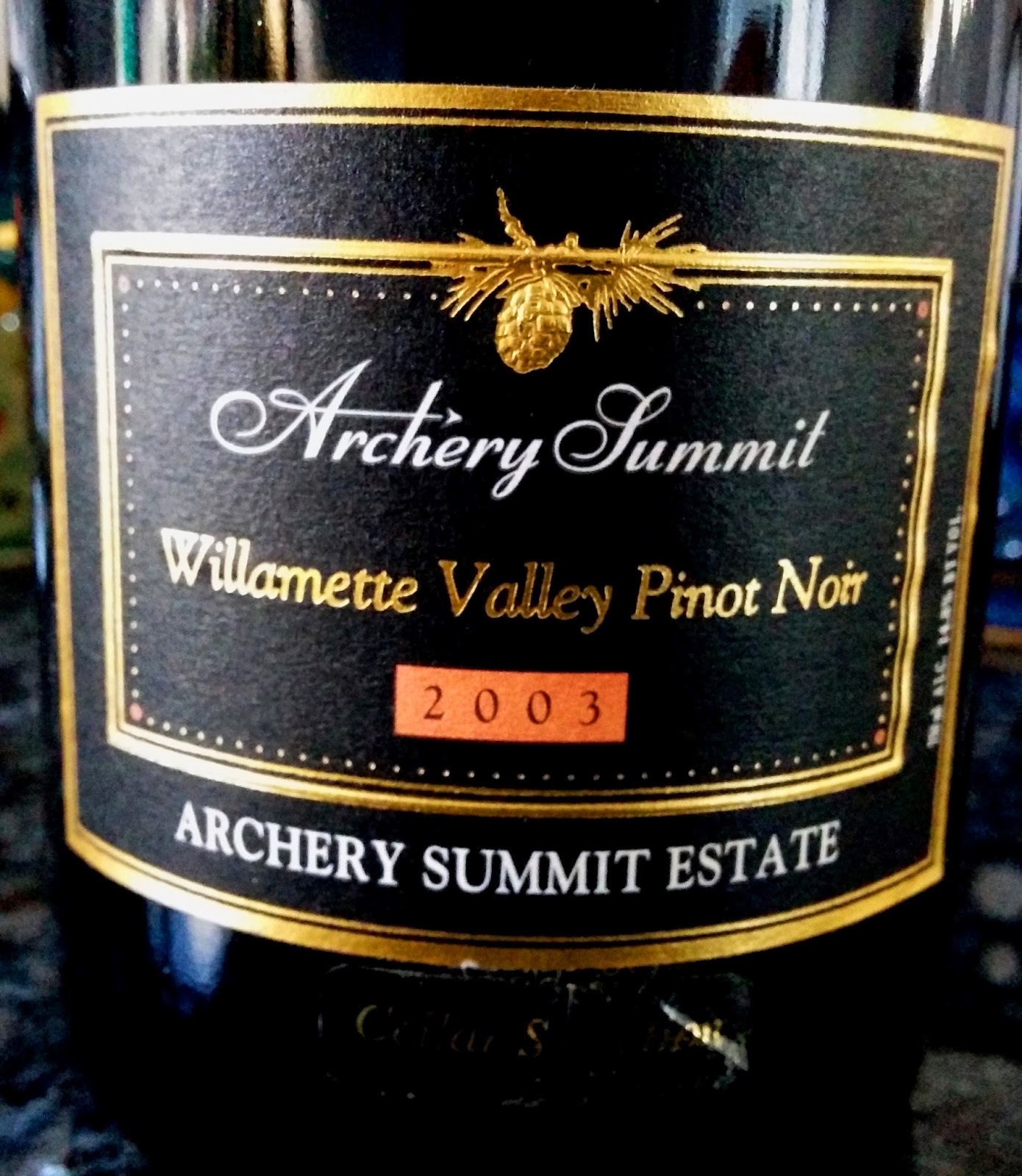 and then tomorrow morning - the Main Event! 2015 Forks and Corks Grand Tasting at the Ringling Art Museum.  And just to finish off this post - here is a photo that my dad took of the museum courtyard in 1952 when my parents came down after their November 1951 wedding and visited with my mom's Uncle Bruce who lived on Anna Maria Island... this is the location of the Forks and Corks Grand Tasting. It doesn't look quite the same these days. 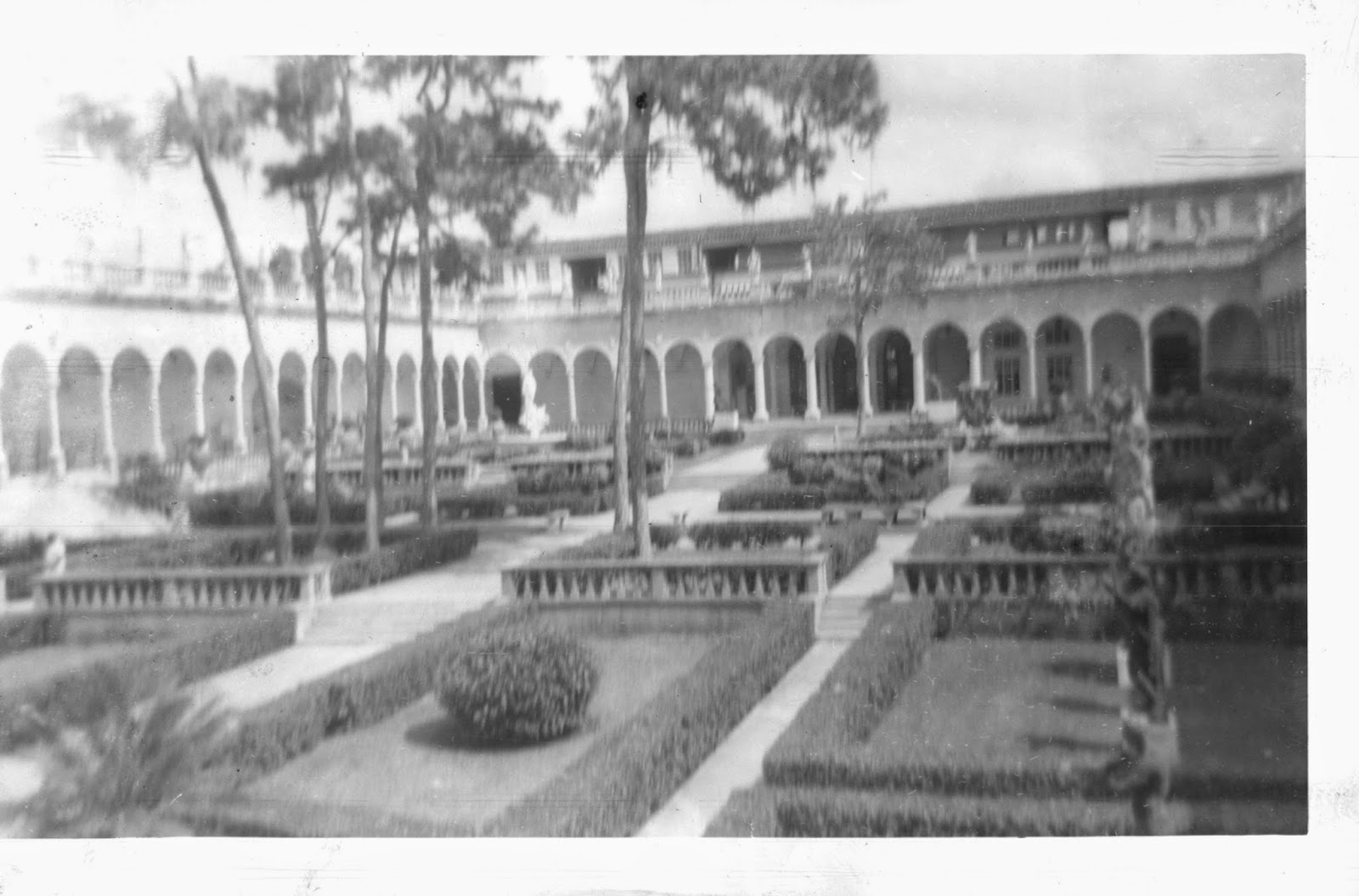 but more photos of that after tomorrow- because it is a photo worthy event--- keep your fingers crossed for CLEAR SKIES!  it is supposed to be cool- and that is OK just as long as it is DRY!
Posted by TOR at 11:10 AM