the first thing I did on Saturday, when I returned to Florida, was make a list of all the things that I had to do before I left town for the summer.  After that I settled into the work... but on Sunday  I headed to the last performance for the season of the Sarasota Ballet-

"The centerpieces of the Sarasota Ballet’s 26th season finale are two dramatically different works representing contrasting choreographic sensibilities, one created in England, the other in America. With a couple of brief George Balanchine bon-bons sandwiched in between, the program demonstrated the company’s growing versatility and the determination of director Iain Webb to push both his dancers and his audiences out of any preconceived ballet box.

"Ninette de Valois’ “Checkmate,” from 1937, is a figurative and allegorical battle between love and death that unfolds (for a little too long) on a stylized art deco chess board to an ominous score by Sir Arthur Bliss; “Fancy Free,” from 1944, the first Jerome Robbins’ work added to the company’s repertoire, is a free-wheeling character study of a trio of sailors on leave in wartime Manhattan, set to the upbeat, populist music of Leonard Bernstein. (It was later turned into the award-winning musical “On the Town” and a film starring Gene Kelly and Frank Sinatra.) Which appealed more depended on personal taste, but each was performed effectively — in some cases, brilliantly — and both remain startlingly fresh after nearly 80 years.

“Checkmate,” which the company last performed in 2008, is a clear descendant of the elaborate artistic productions of the Ballets Russes during the early 20th century, where design and music, often by influential artists of the day, were given equal emphasis with choreography. Its Cubist-influenced backdrop of geometric shapes lit in vivid colors and costuming that turns each dancer into a chess piece — pawn, bishop, knight, king or queen — were created by E. McKnight Kauffer, an ex-pat American who was one of the most prolific and successful poster artists of the ’20s and ’30s. 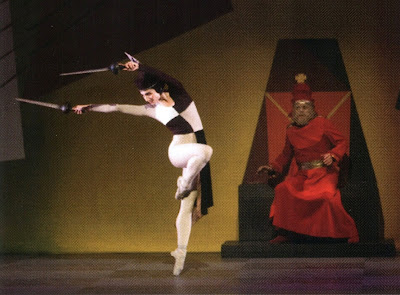 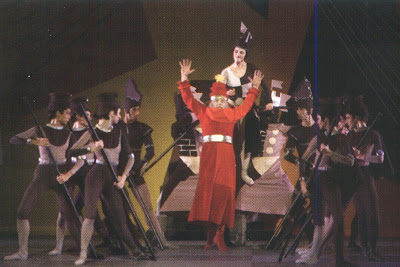 "A non-dancing prologue with Love and Death establishes the contest, which evolves as a series of skirmishes between the red troops, led by a chivalrous first knight (Ricardo Rhodes) and a largely ineffectual queen and the black forces, led by some menacing knights, castles and bishops and a severe belladonna (Danielle Brown) wielding foot-long swords.

"There is never really any question of who is going to win. From the moment she takes the stage, Brown exudes power, intolerance and entitlement. This is not the first time she’s excelled in the role of the femme fatale, but it may be her most fully expressed characterization. At one point she twirls her swords like a Western gunslinger, and if you ever thought the doddering old King had a chance, it was pretty much annihilated right then and there.

"The choreography isn’t virtuosic, but it is well-suited to the game at hand, with lots of stiff-legged marches on pointe for the women and plenty of nose-touching battements from the queen. The final section, in which the long poles wielded by the black forces become a cage and then a rack for red king, is a good example of the integrated design of the period.

“Fancy Free,” though only seven years younger, takes an entirely different approach. Robbins’ genius lay in his ability to capture character in his choreography, without a hint of contrivance or disingenuousness. As someone who seriously studied acting, he infused authenticity into even the slightest gesture, and nowhere is that demonstrated more aptly than in the boisterous buddy-boy exchanges of the three sailors as they enjoy the lures of shore leave, from beers at the bar to potential romance. 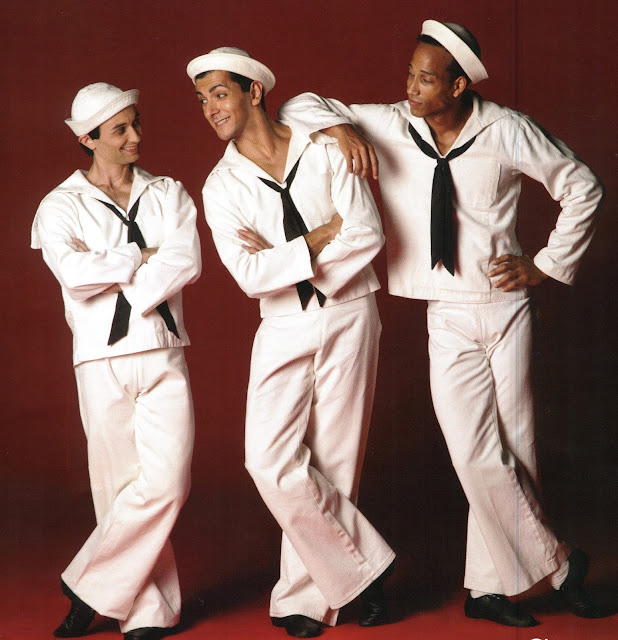 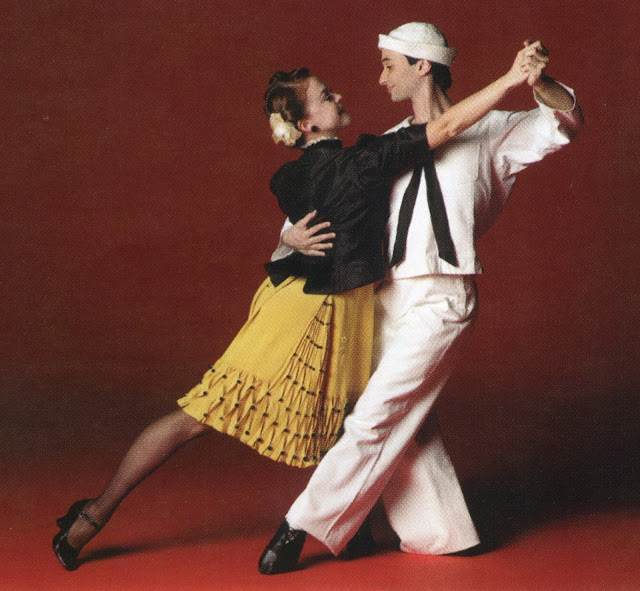 "Each performs a distinctive solo vying for the affections of two young women  a rousing gallop from Alex Harrison; a sweetly bemused waltz from Jamie Carter and a hip-wiggling danzon from Rhodes. If I’d been the pursued, I would have caved to the charms of any one of them. But their rivalry leads to a brawl, the women abandon them and they’re left to their boyish devices, flicking gum wrappers, playing pranks and bonding in an endearingly 20-something way.

"As if Robbins’ masterful movement weren’t enough, there was the Sarasota Orchestra (with conductor Ormsby Wilkins) playing Bernstein’s electrifying tunes with verve and pianist Jonathan Spivey making the ivories sing. And in the audience was a rightfully beaming Philip Neal, the repetiteur who worked with Robbins for a decade at the New York City Ballet and coached the Sarasota dancers into a performance that even the notoriously difficult choreographer would have applauded.

"For the purists, Webb threw in the company premiere of Balanchine’s “Valse Fantaisie,” a pretty but inconsequential classical piece to Mikhail Glinka’s waltz of the same name for a couple and four female corps members in flowing chiffon dresses. And for “Logan’s Ladies” and the hometown crowd, there was the frenetic bravura of “Tarantella” (with pianist Read Gainsford), performed with plenty of zip.

"In all, it was a sumptuous conclusion to an ambitious season that added some significant works to the company’s repertoire — including Balanchine’s full-length “Jewels” and this first Robbins’ work. Though the programming for next season has yet to be revealed, it’s a likely bet that Webb’s selection will be every bit as diverse and eclectic." (Sarasota Herald-Tribune  Carrie Seidman) 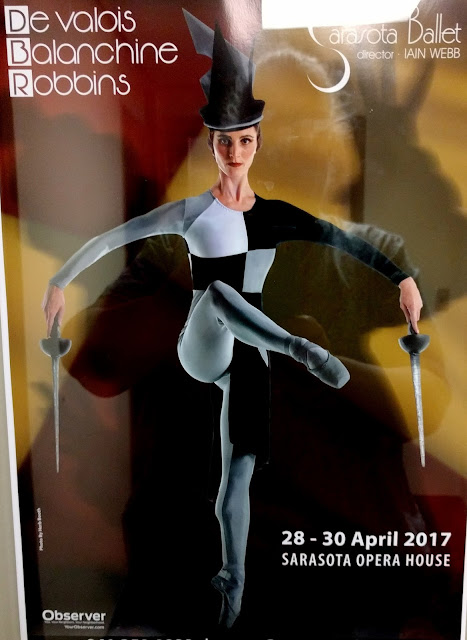 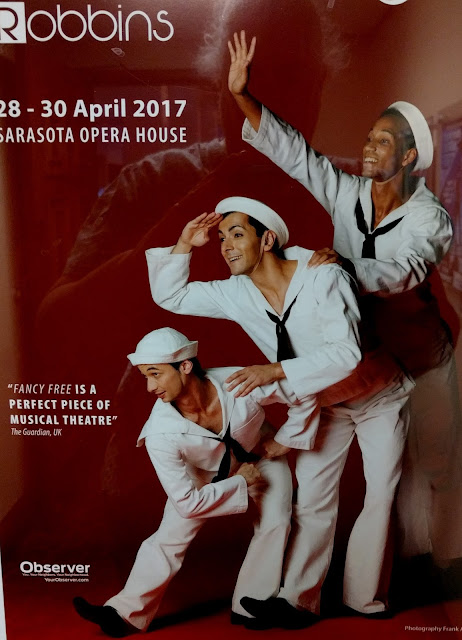 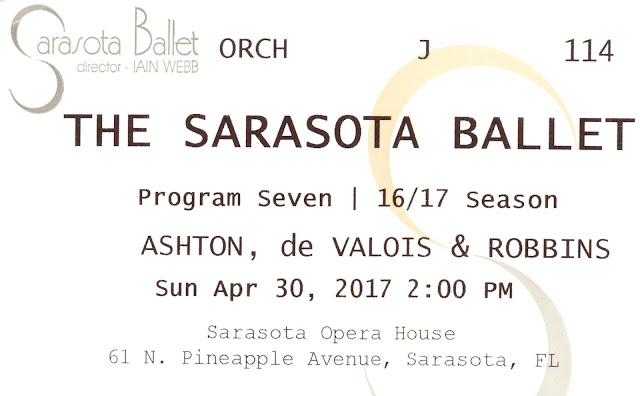 My favorites in order were the Checkmate performance and the Tarantella... the Fancy Free seemed dated to me and the Valse was a lovely performance with little story to bring it to the top of the list... 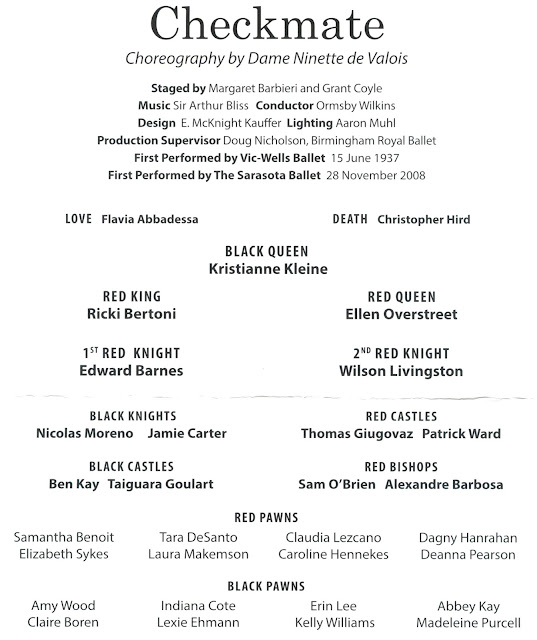 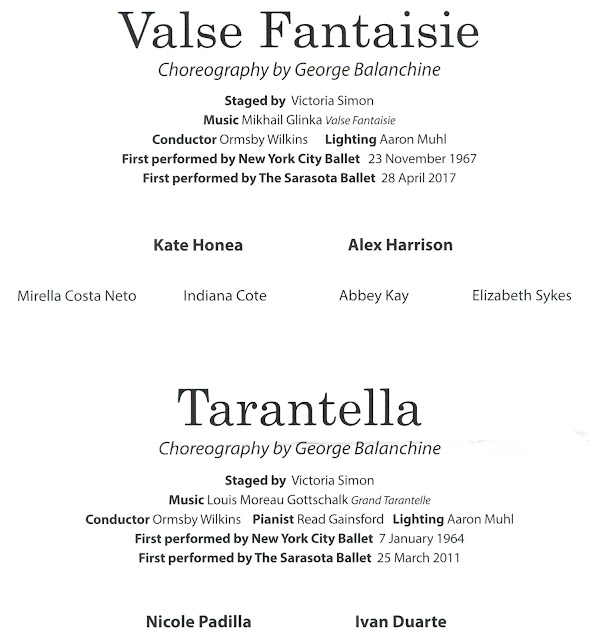 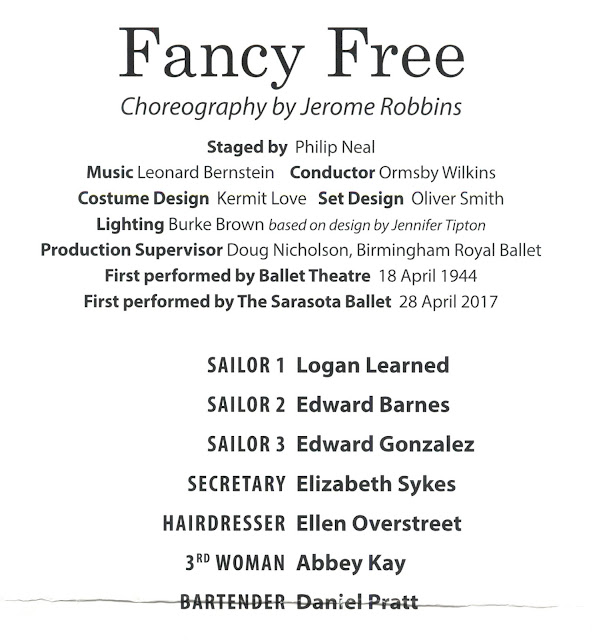 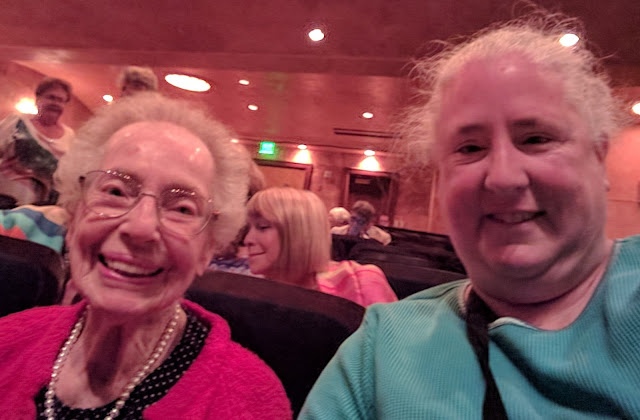 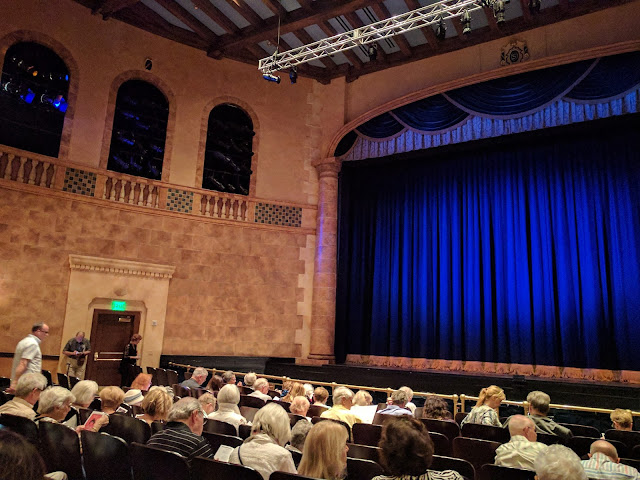 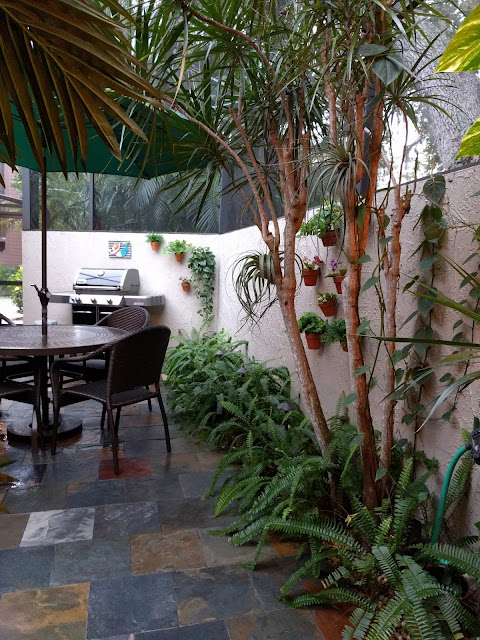 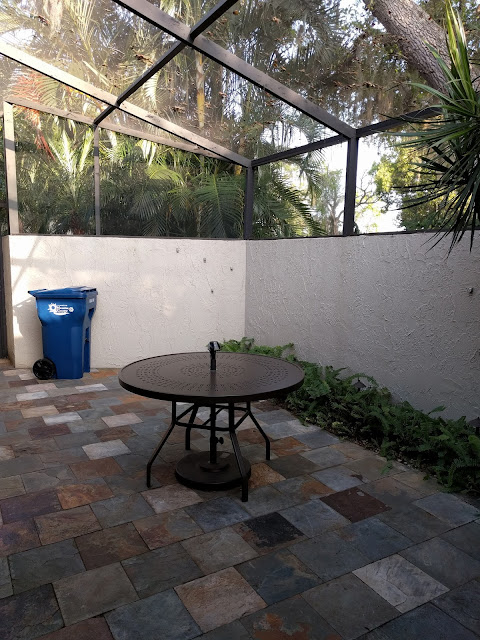 "Dig this, daddy-o! La La Land meets Little Shop of Horrors in this hip and hilarious world premiere musical. Written by the talent behind School of Rock, The Little Mermaid and Tangled, Beatsville takes us to Greenwich Village, 1959: the world of goateed artists, turtle-necked poets and bongo-playing jazzbos. Tragically square busboy Walter Paisley wants to be one of the beatniks, but he has no artistic talent whatsoever. When he accidentally kills a cat and hides it in a lump of clay, “Dead Cat” is declared a masterpiece, and Walter a genius. More “sculptures” bring more acclaim, but will the world discover Walter’s secret? With a dazzling score combining jazz, pop and bebop – hang onto your berets – we’re headed to Beatsville!"

And here is my review-

OK the world may be dreaming of a "beat" musical based upon some of the terrific jazz of the era. This is NOT IT - just finished Act I - a mere 1 hour and 20 minutes long - some of this needs to end up on the cutting room floor and I vote for ditching the "Broadway style" musical numbers. As with much musical theater too trite. You have gold mine with authentic period work so dig it. So far the best part of this "can't decide what it wants to be" work was the dead cat that "inspired" Walter's masterpiece sculpture. #needsalotofwork.

Now having gone the distance to the end (many did not make it to the finish line) here's my mini review. Derivative of several things I would call this Little Shop of Horrors meets Sweeney Todd. It is a cute and funny NY story in search of a coherent structure - especially in the choice of the score. The music is a hot mess of some decent period style jazz and a lot of stupid rhyming Broadway songs sung waaaay too loudly. Staging was masterful and set designs perfect for the multi location action of different scenes. I told Phil that the Cohen brothers need to take on this project and whip it into shape. There is something wrong when a couple of the main characters sing songs that sound a lot like "I'll know" from the tired old musical that opened this season (Guys and Dolls) ... Three hours I'll never get back. Sadly it really did have a lot of potential.

LOL I guess I must not be the appreciative audience Sarasota is known for. #cantloveitall #shouldntloveitall 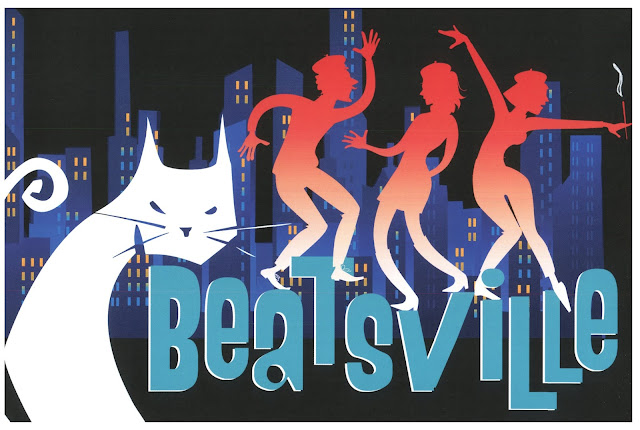 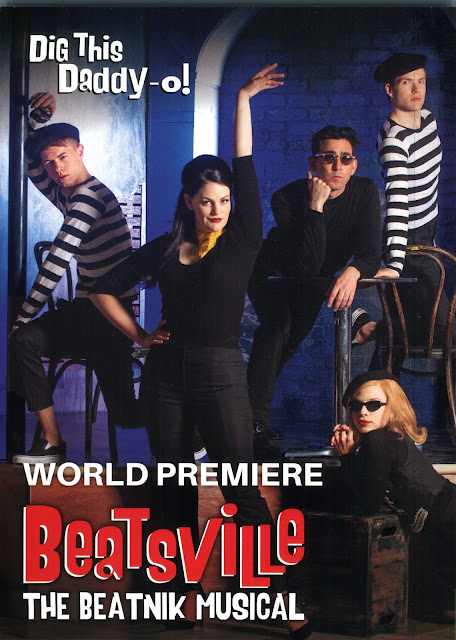 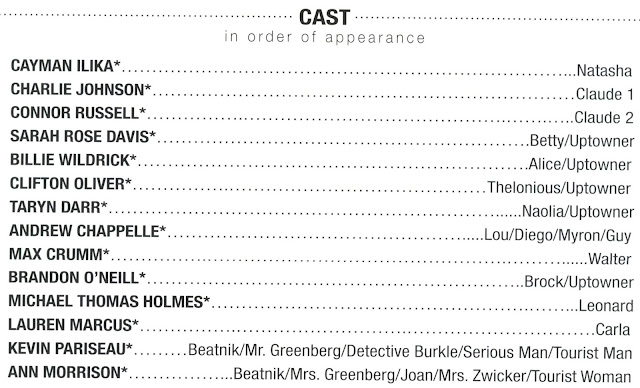 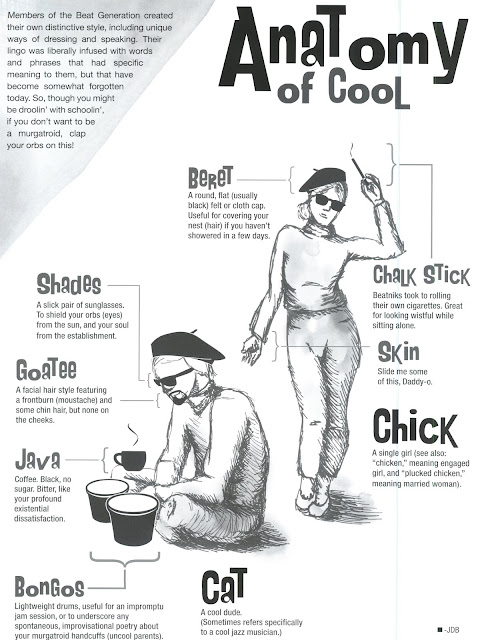 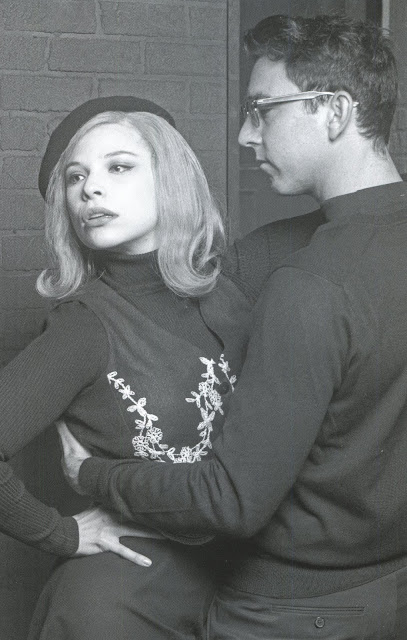 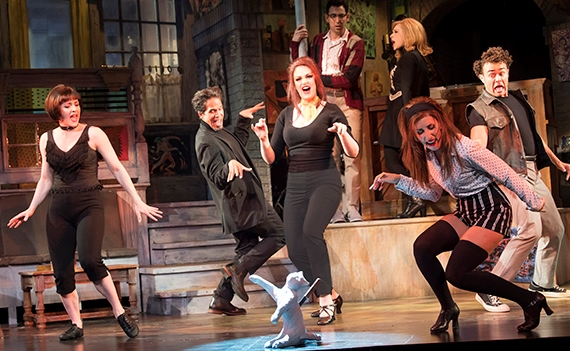 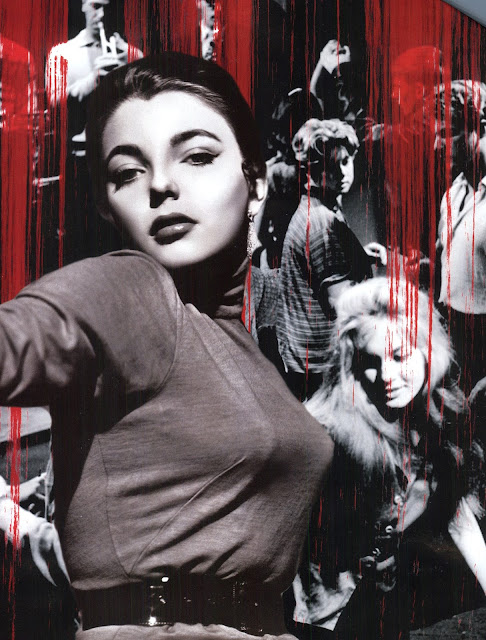 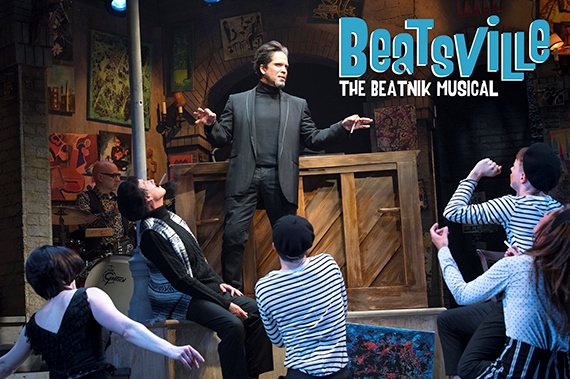 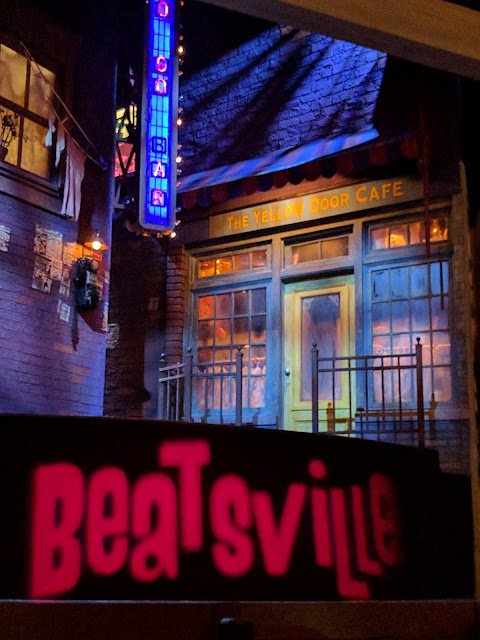 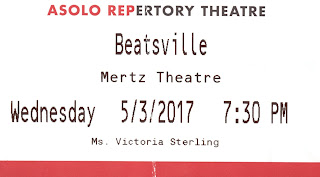 so the next morning I flew back to Chicago and now I am plowing my way through all the stuff that has been piling up on my desk since my return from Uzbekistan and the departure for DART 2017...so I promise soon the DART things will start to post- lots of incredible crab based meals and some interesting sights along the way - a couple of ferry rides and even the discovery of the joys of WAWA...LOL so stay tuned!
Posted by TOR at 6:06 PM