This post is dedicated to the memory of David Lett-

David Lett (1939 – October 9, 2008) was the founder and winemaker for The Eyrie Vineyards in the U.S. state of Oregon. He was a pioneer in the Oregon wine industry.

Lett grew up in Utah and studied dentistry in California. Against the advice of viticultural professors at the University of California, Davis, Lett and his wife, Diana, moved to Oregon to plant Pinot noir. They founded Eyrie Vineyards in 1965, and their first vintage was 1970. The hillside acreage was near Dundee, a small city about 45 minutes south of Portland.  He was the first to cultivate both Pinot noir and Pinot gris in Oregon, a pioneering effort which earned him the nickname "Papa Pinot".

Over the years, David Lett ("Papa Pinot") maintained a light-handed style of Pinot noir that did not follow the trend toward greater flavor, tannin, and color extraction, believing color not to be an indicator of quality in Pinot noir. This put him at odds with some of the wine critics.

In a retirement farewell to David Lett, this wine and every other reserve pinot noir were poured in a special vertical tasting at the winery in July 2008. Lett died on October 9, 2008 of heart failure. David's son Jason Lett is now the head winemaker for the winery. (wikipedia)

all photos of David Lett came off the internet 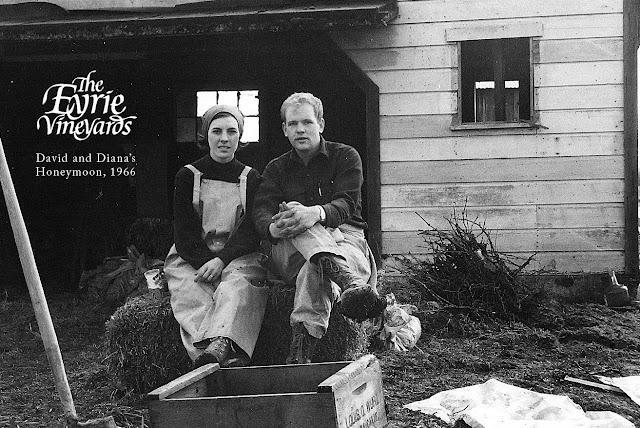 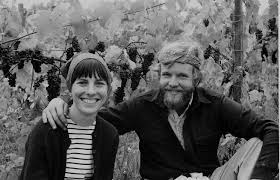 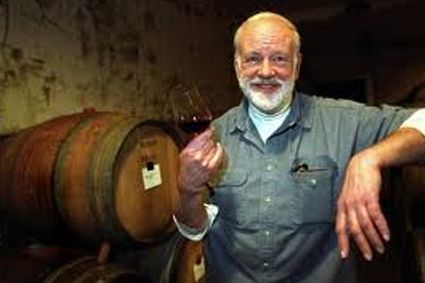 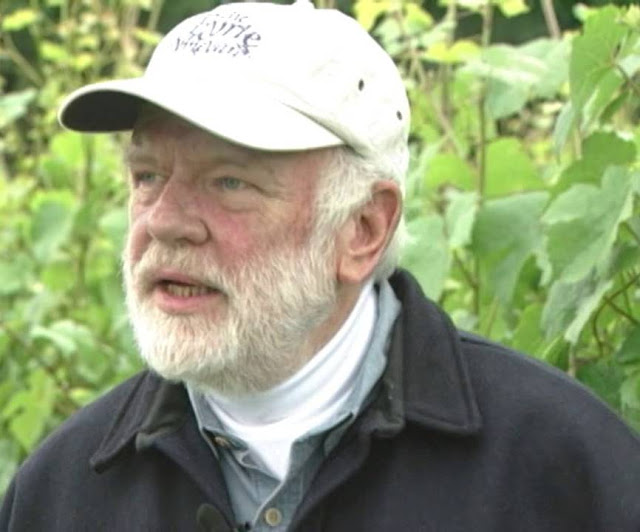 Last night, with a gift of the 1983 Eyrie Pinot Noir from our cellar-mate Neil, we headed to Oriole (TWO Michelin starred again for 2018!) for dinner.  We had four bottles of wine to accompany the amazing food of Noah Sandoval and Genie Kwon but the 1983 Eyrie was hands down the winner of the evening.  And here's how it went down.

the wines in the order we liked best- the Oregon pinot from 1983 - then the 1975 Bordeaux - then our current vintage of the white Beaune Clos des Mouches (2009) and finally the Sine Qua non Covert Fingers pinot noir from 2004....

Here is the NYT obit for David Lett-

David Lett, who planted the first commercial pinot noir vineyard in Oregon, opening the way for what became a thriving pinot noir industry, died Thursday at his home in Dundee, Ore. He was 69.

There was no wine commerce in Oregon back in 1965 when Mr. Lett arrived in the Willamette Valley, armed with 3,000 vine cuttings and a theory that the best wines come from places where the grapes have to struggle to ripen. He and his wife, Diana, planted 13 acres of vines in 1966 in an old prune orchard in the Dundee Hills, which they named the Eyrie Vineyard. Their vines foreshadowed the future of Oregon winemaking. Today, the state has more than 10,000 acres of pinot noir.

In 1970 he produced his first vintage of Eyrie pinot noir. He found it so disappointing that he refused to call it pinot noir, selling it instead as Spring Wine. He soon found his stride, and in 1979 his 1975 Eyrie pinot noir became the first American pinot noir to compete successfully with Burgundies in a blind tasting in Paris.

The Eyrie pinot noirs are graceful and elegant with complex aromas. They are pale ruby in color, and against many of today’s inky dark pinot noirs, which strive for power and weight.   “He always felt deeply appreciated by culinary types who understood that wine was made to go with food,” Jason Lett said. “I do think he felt regret for the misrepresentation of power as terroir.”

David Lett was born in Chicago in 1939, and he graduated from the University of Utah in 1961. After a stint in the Coast Guard Reserve, he planned to attend dental school at the University of California, Davis. On his way to Davis for an interview, he made a detour through the pastoral Napa Valley, where he stopped at Chateau Souverain, the leading Napa winery of the time, run by Lee Stewart.

“He was absolutely floored by what Lee was doing,” Jason Lett recalled, “and he asked Lee for a job right there.”  His parents were not so thrilled, but agreed that if he returned to school for a professional degree, he could pursue winemaking. He did attend Davis, and emerged in 1963 with a degree in viticulture.

After traveling through Europe visiting wine regions, he returned to the United States in love with the pinot noir grape, with the conviction that it could succeed only in a marginal environment. A taste of some particularly good strawberries grown in the Willamette Valley convinced him that it was the place for pinot noir. He moved there in 1965.

While searching for the right site for a vineyard, Mr. Lett supported himself by selling college textbooks. The job permitted him to drive around the state, and whenever he saw a likely area, Jason Lett said, he would pull over to take soil samples. In the summer of 1966 he found his vineyard, and he also found a wife. David and Diana Lett spent their honeymoon planting grape vines, Jason Lett said.  Jason Lett took over as winemaker at Eyrie in 2005.

While pinot noir was his passion, Mr. Lett was also the first winemaker in the United States to produce pinot gris, now the second leading grape in Oregon, after pinot noir.

Although Mr. Lett at first derided his 1970 vintage of pinot noir, he decided later that he had been mistaken. With time, the wine he thought thin and wan turned complex and delicious.  “We had a bottle with Christmas dinner last year,” Jason Lett said, “and it was fabulous.”

This man was a GIANT in the Oregon wine industry and we were lucky enough to have a tiny bit of his expertise in our 34 year old bottle of Eyrie last night!

Each of the other wines could have been WOE on some other night but not last night - the "other" wines are shown in the order of faor (rated by us LOL the ones who drank them!) 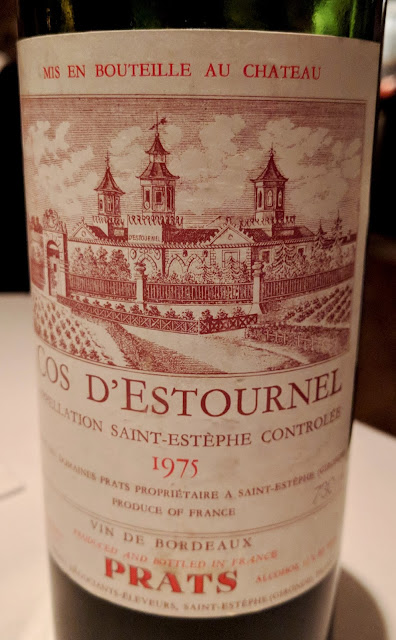 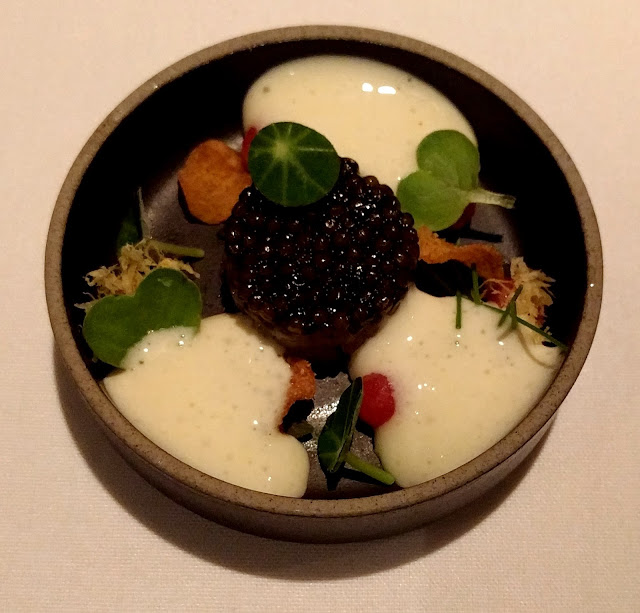 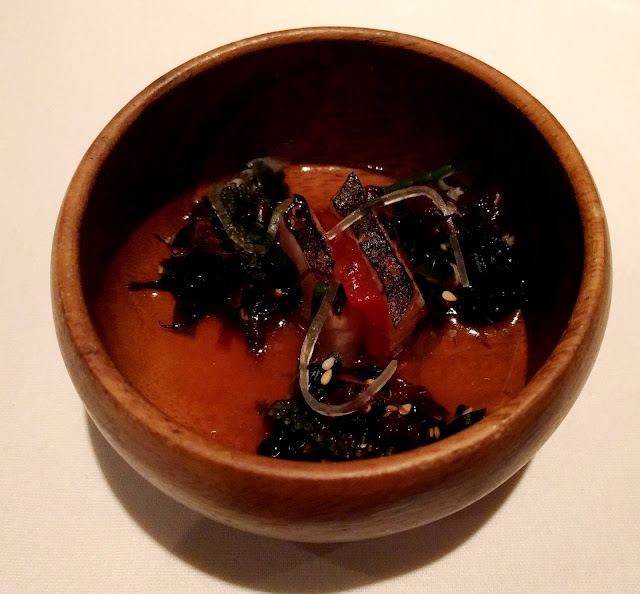 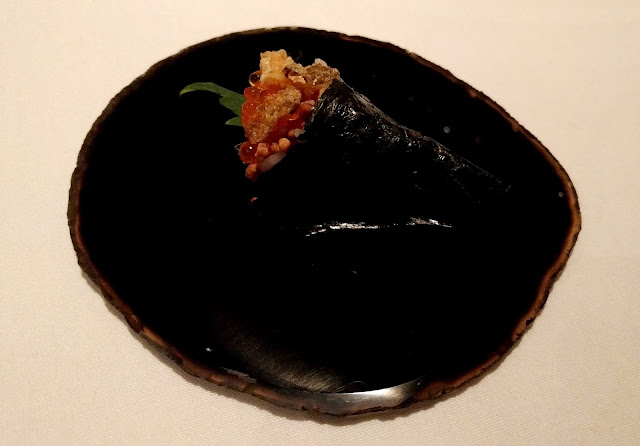 this has two items - the oyster and the jamon - 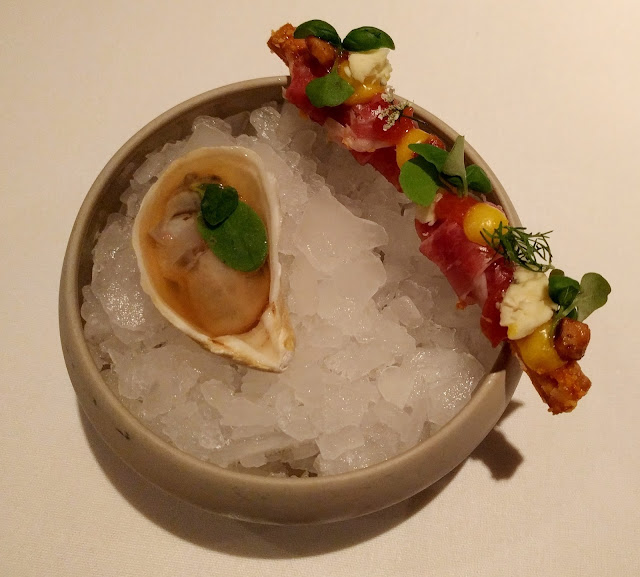 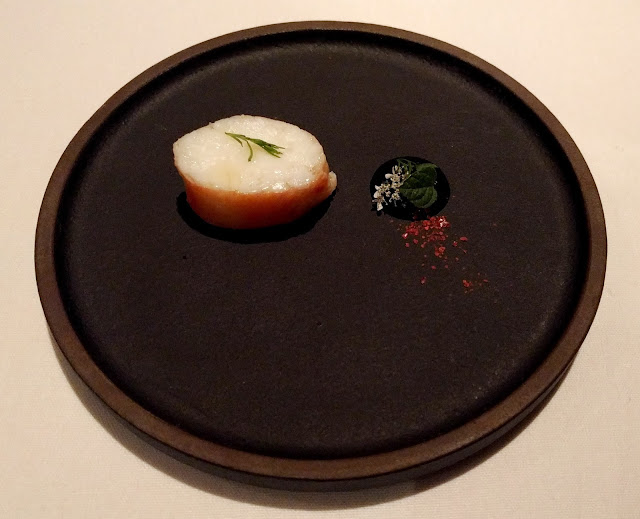 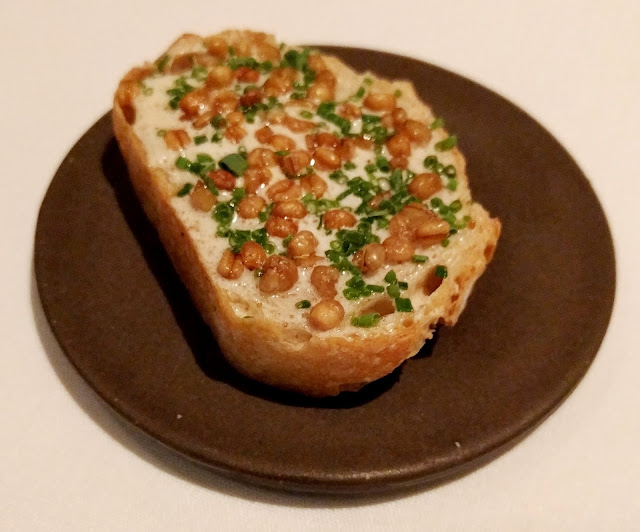 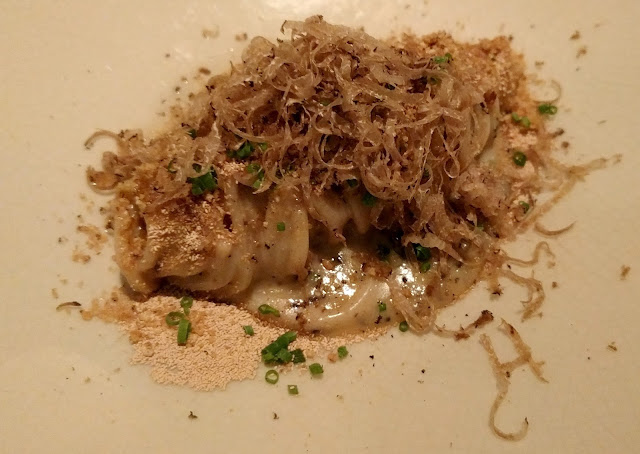 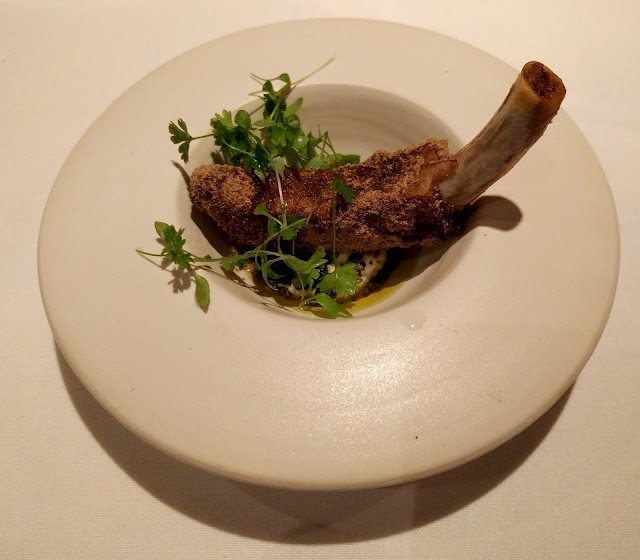 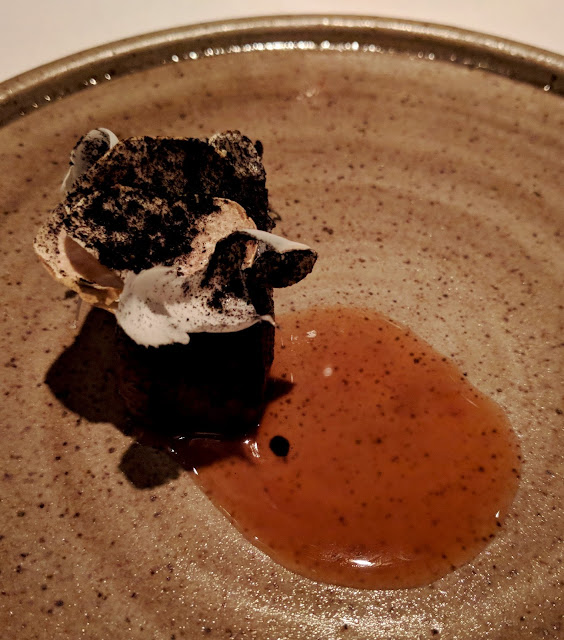 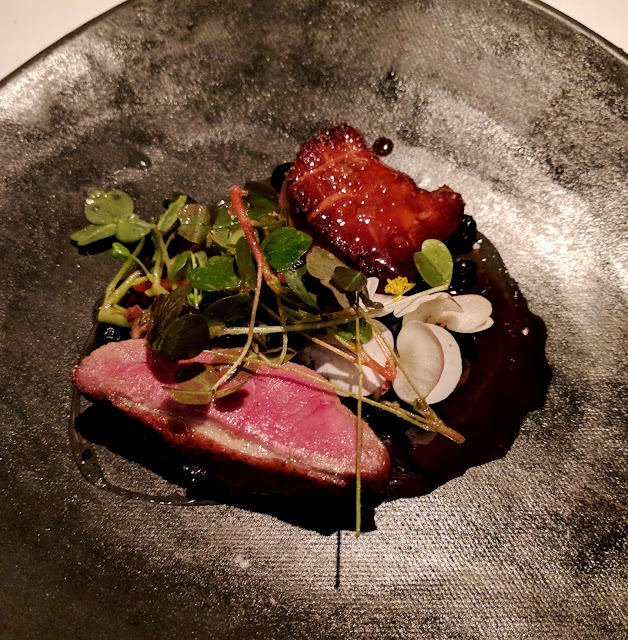 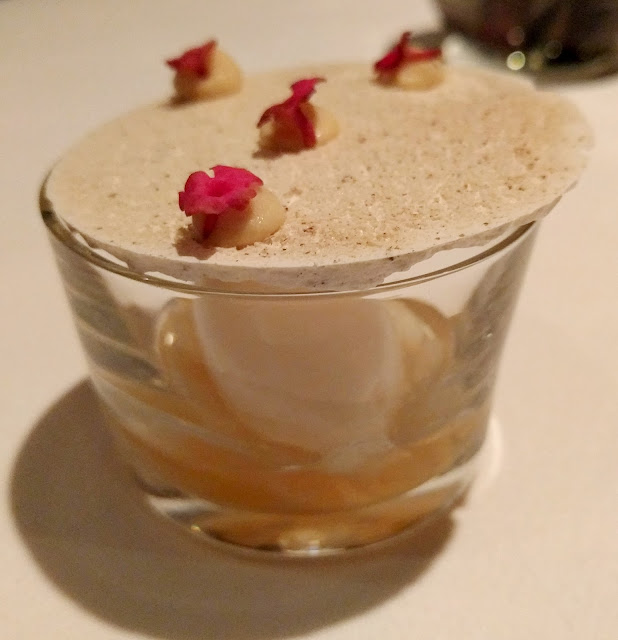 these next items are ones that showcase the Esquire Pastry Chef of the Year - Genie Kwon! 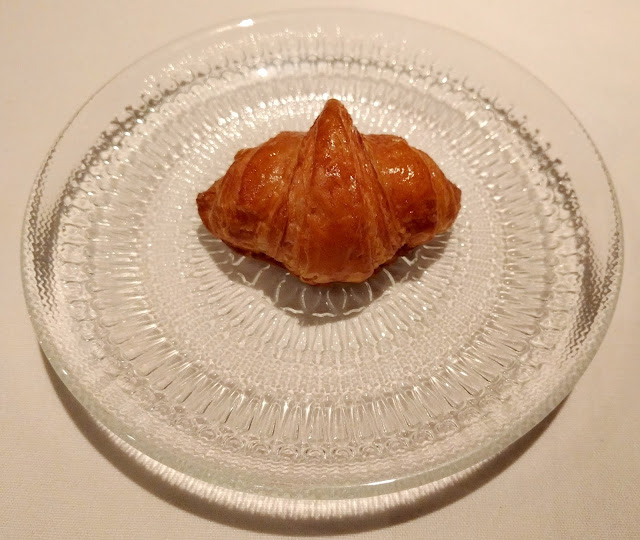 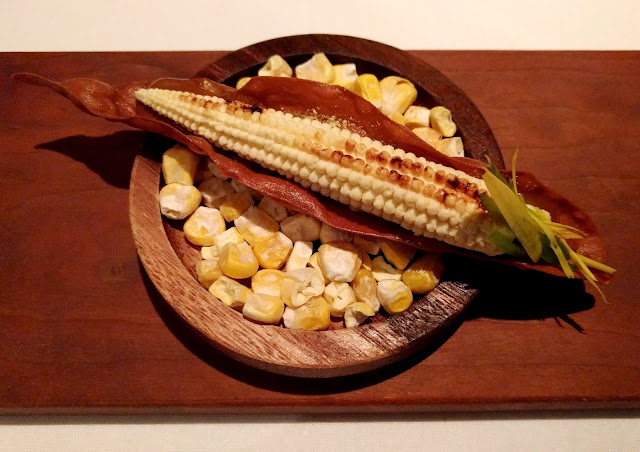 and our take home gift of pie! 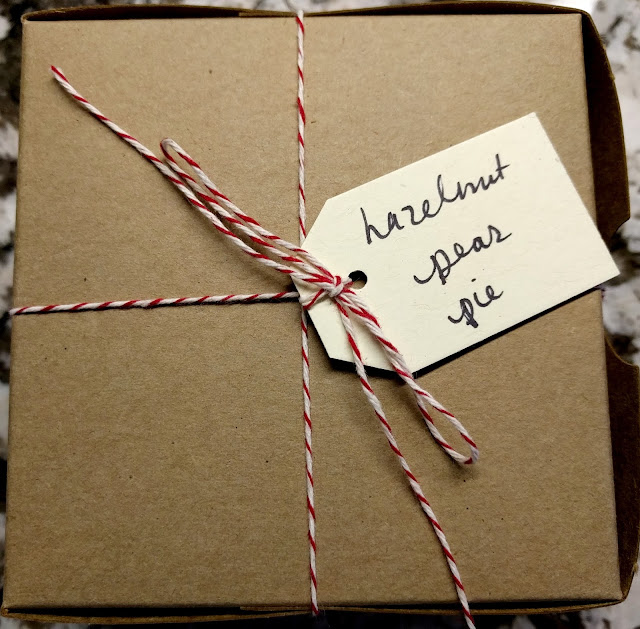 and David, thanks for the great wine and all you did to build the Oregon wine industry - thank god you didn't pay attention to the noise! 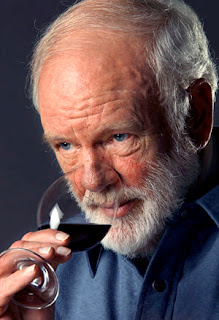 What a spectacular surprise! (and thanks Neil for passing it along!) Next up tonight's concert by Jeff Daniels (unfortunately "venued" at City Winery one of my least favorite places to hear music)  We carry on.... so stay tuned!
Posted by TOR at 2:15 PM