up and down the scale

So in the last four days - since the Teitur celebration with Ron & Mary- we have had three meals out. they went up and down the scale of dining - with a hole in the wall Moroccan place and a French bistro and on the top of the scale (by far!) our favorite pop-up 2C Chicago!

So let's go from the top- another sublime meal at 2C. There is everything to love here... the intimate setting, the warm and friendly and extremely talented chef - Jeff Dysart, and of course- above all - the food.... we went with friends Ron & Mary and Kevin & Shari - and the group was a complete win for us since we love all of these folks.  The other two couples did not know each other before the evening so it was fun to introduce them to each other.

but the meal- and since every course was stunning in flavor and composition on the "plate", I can go in order - you can read the menu after the snacks course photo- 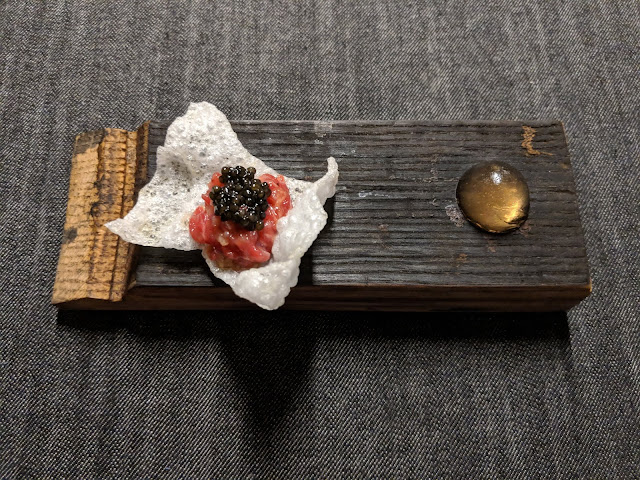 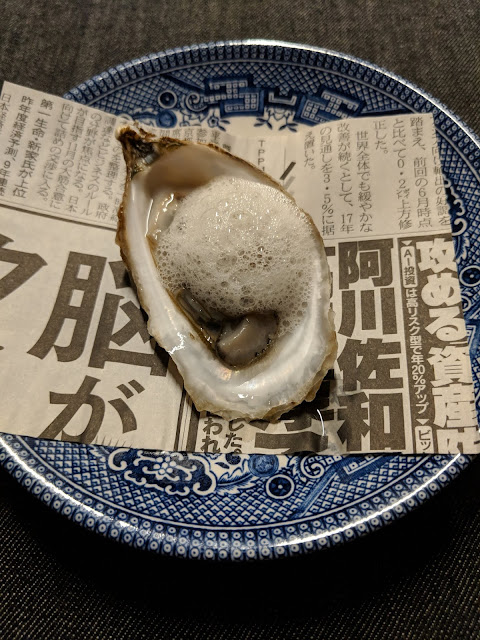 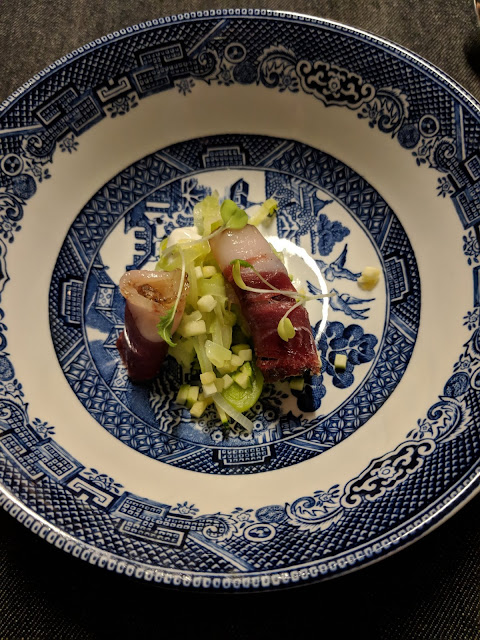 with the corn soup- 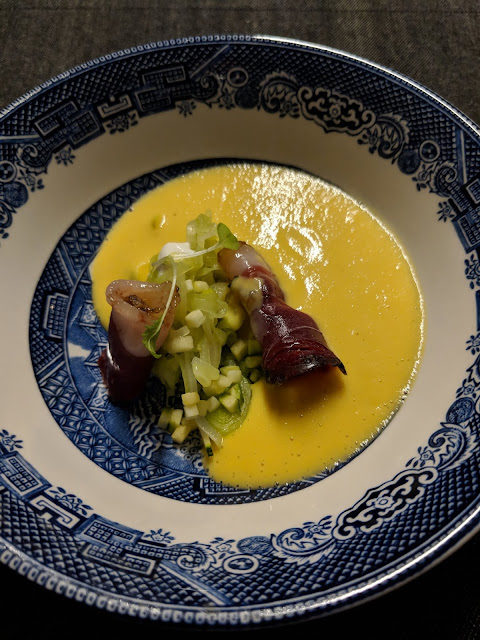 before the reveal- LOL 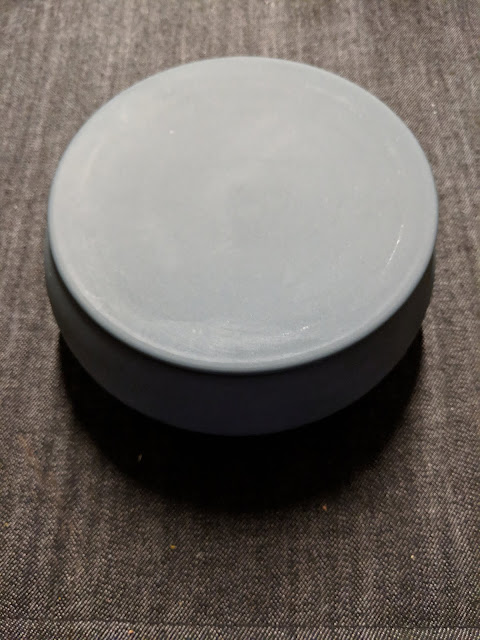 voila! oh ad the smoke didn't make the photo but the flavor and scent of it was captured in the dish! 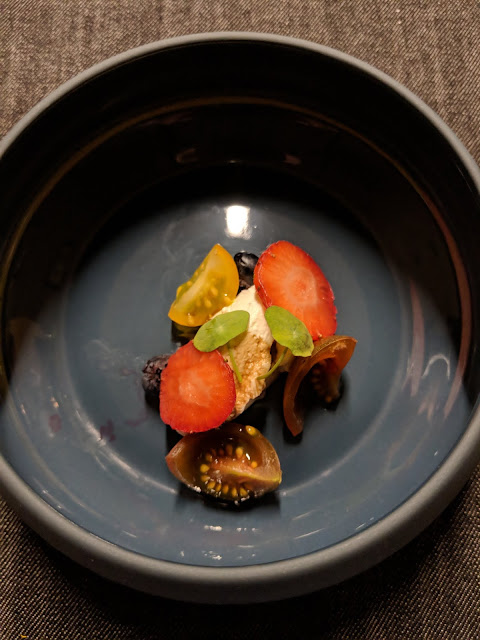 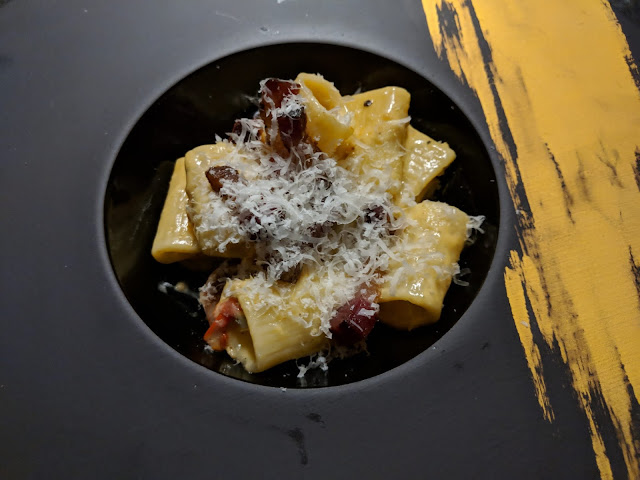 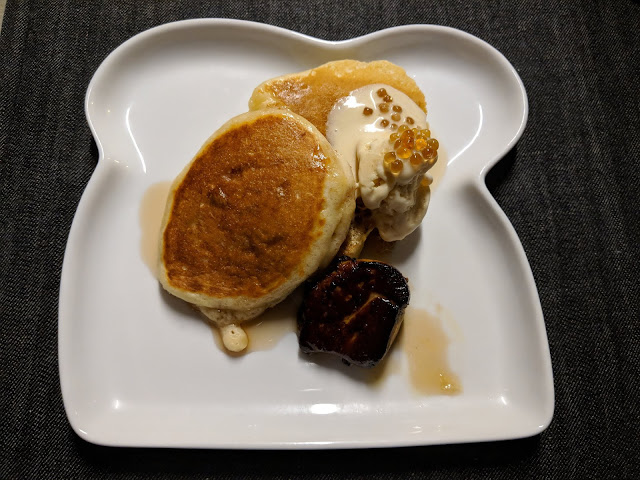 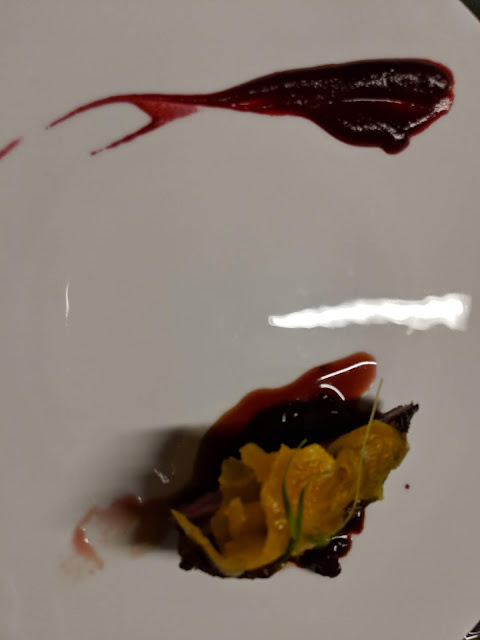 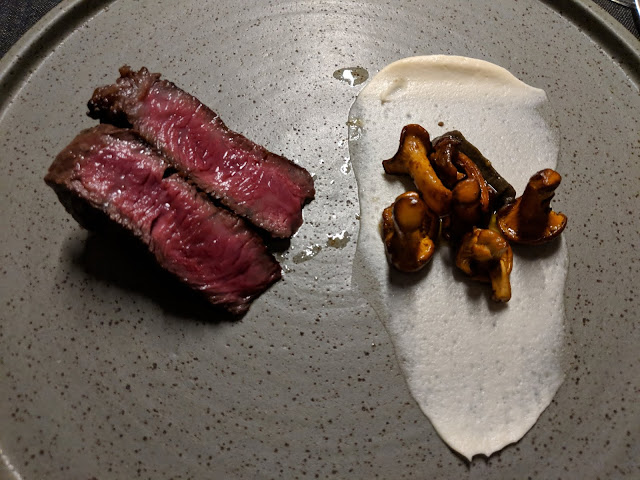 before and after saucing... 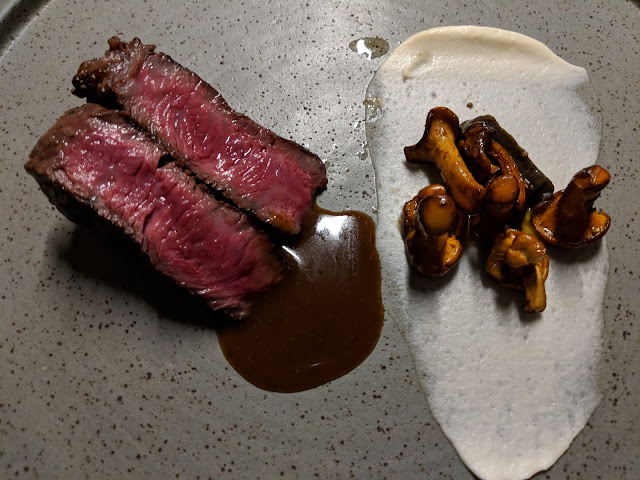 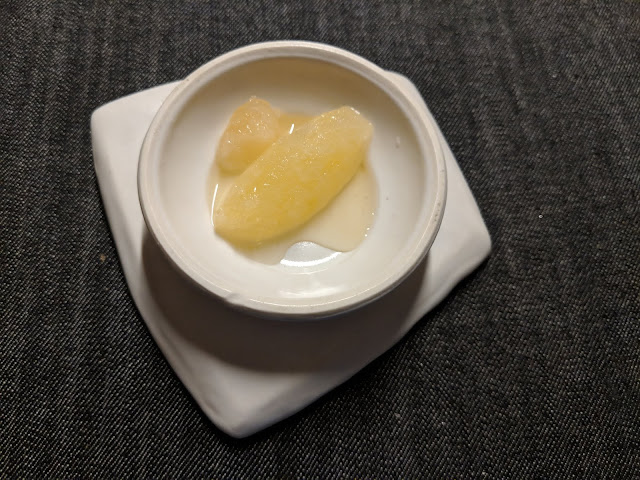 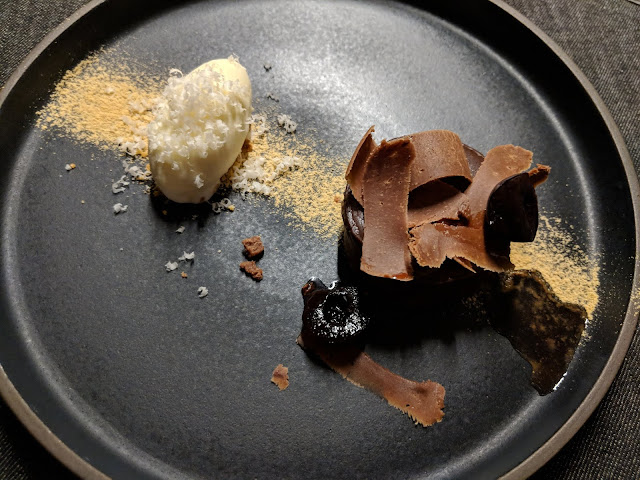 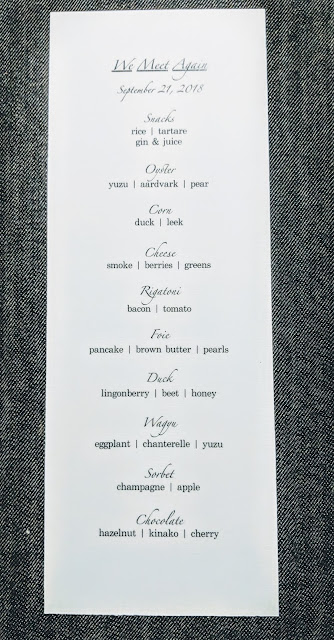 the wine line up for the evening - 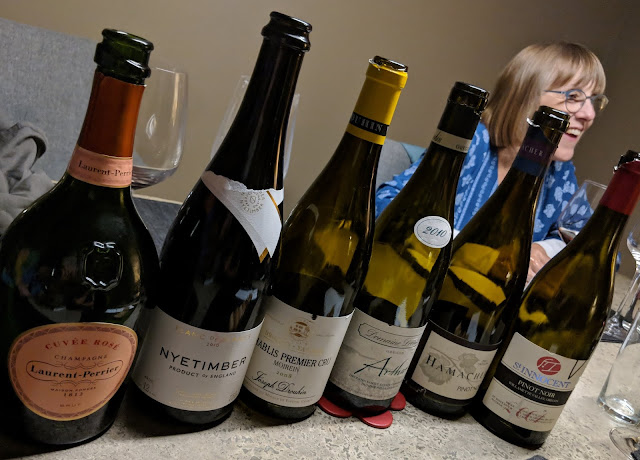 Now we are trying to figure out how to get back before I leave town - and good luck with that!

*******
working our way back in time from last night's outstanding meal- we tried a new to us French place west of the loop called La Sardine...Phil liked it -but I not so much.  The service was inattentive and I found the food lacking. To be 100% honest I didn't really feel like going out and wasn't hungry so I only had part of the charcuterie and a bowl of the onion soup (it was NOT exemplary- too cheesy) and watched Phil eat.... we did have an excellent half bottle of Olivier Leflaive wine (2015 Puligny) and then one of our own Corton Renardes from Delarche an fabulous 1996 red burg that we paid the $50 bauck corkage for (which I thought was rather steep given that we purchased a very expensive white - at $80 for the half bottle) - the wine list is good but not as good as our cellar... 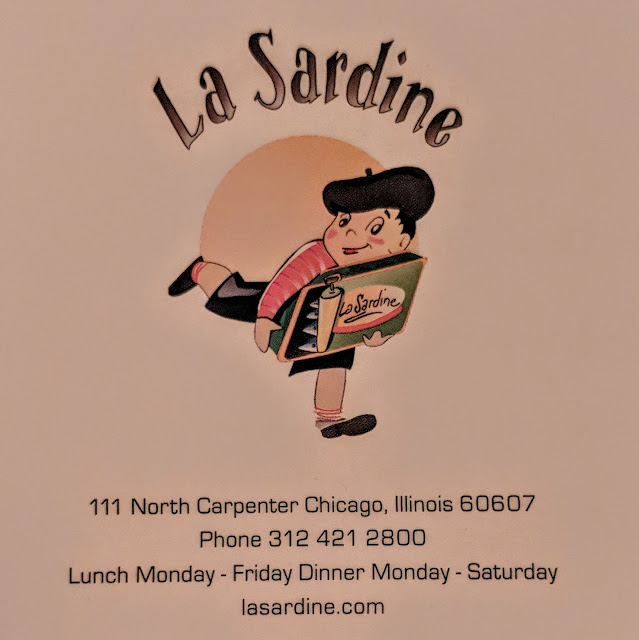 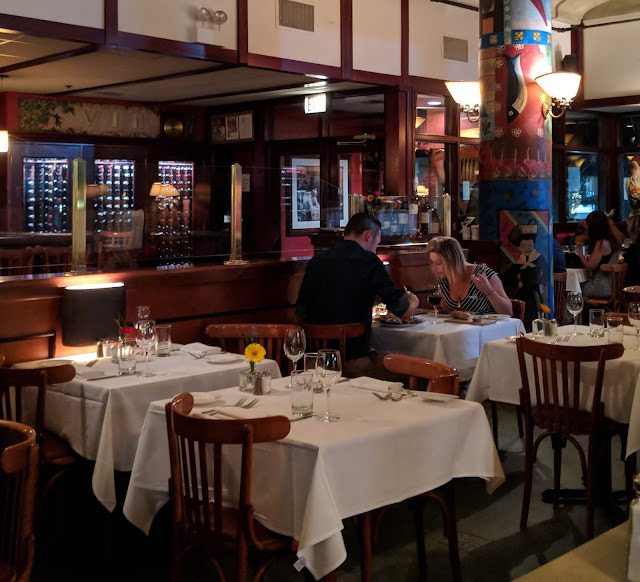 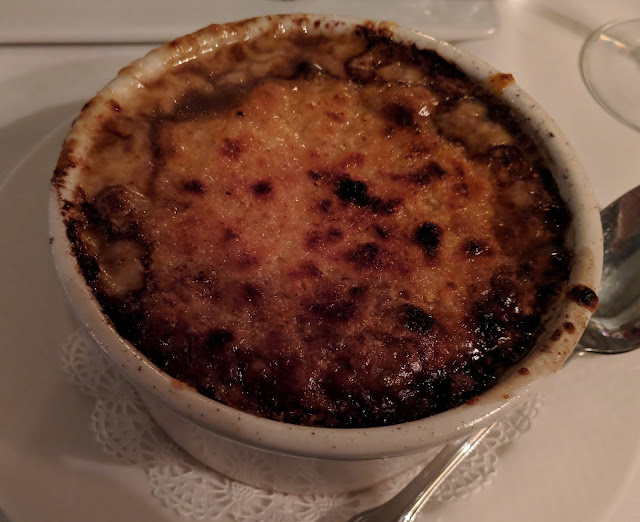 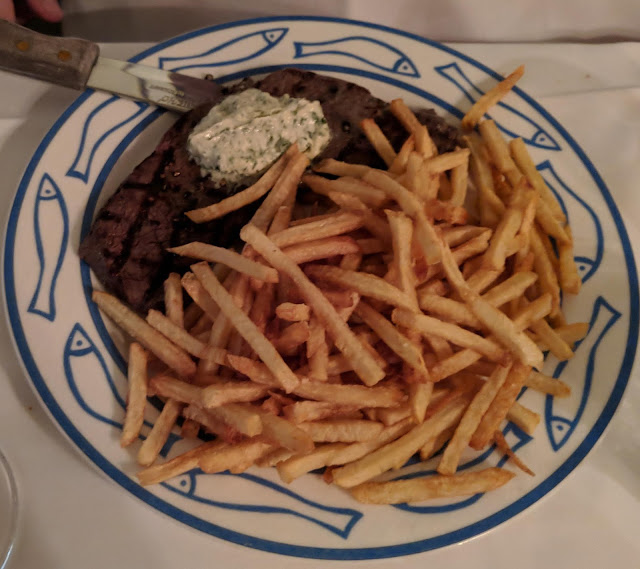 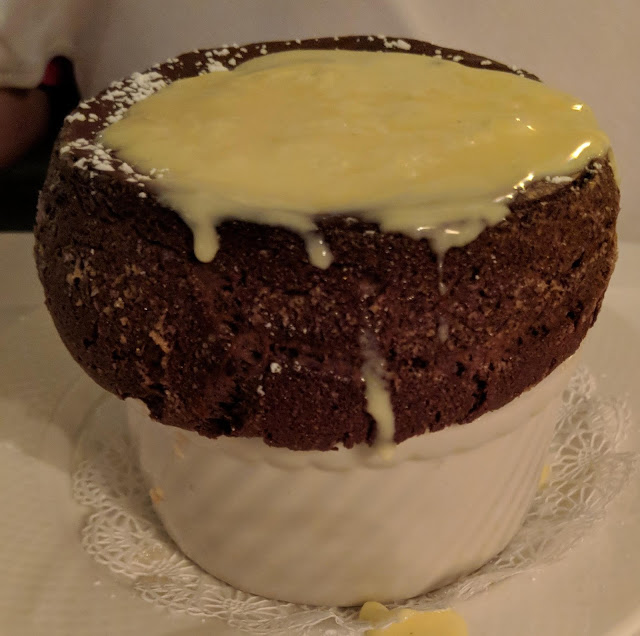 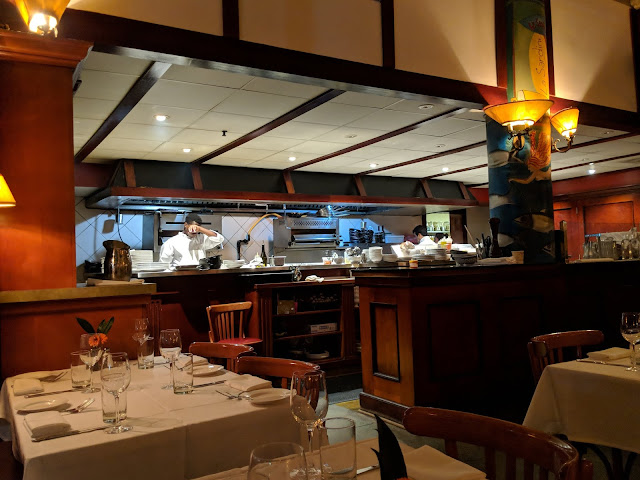 so while Phil may go back while I am out of town I probably won't....

then two nights before 2C we had dinner with Mike and his uncle at a hole in the wall Moroccan place called Shokran- near the Irving Park EL stop for the Blue line... 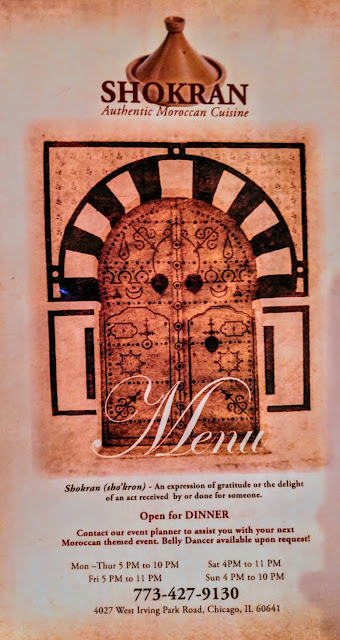 Phil and Uncle Walt had the mixed grill 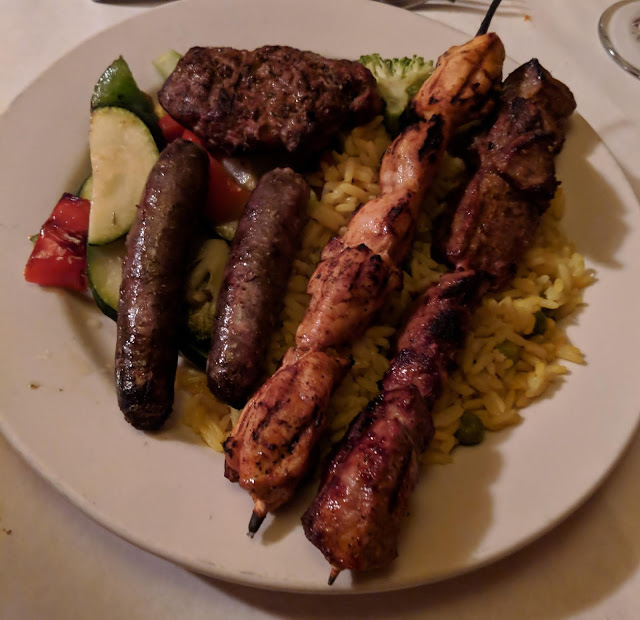 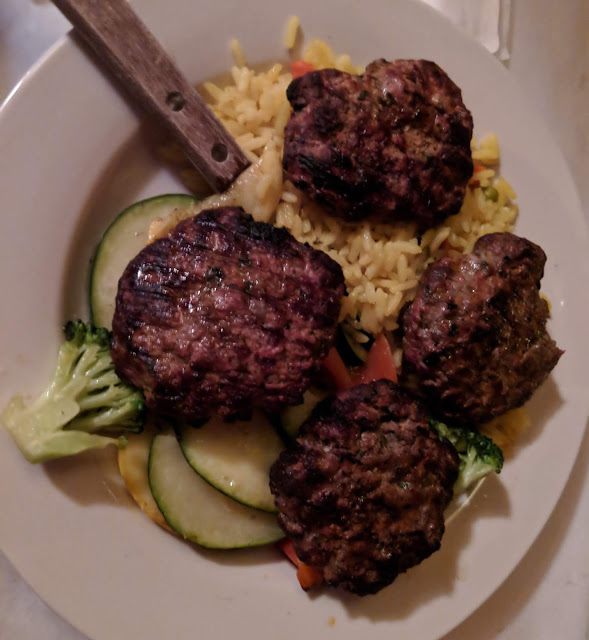 Mike had the lamb tagine 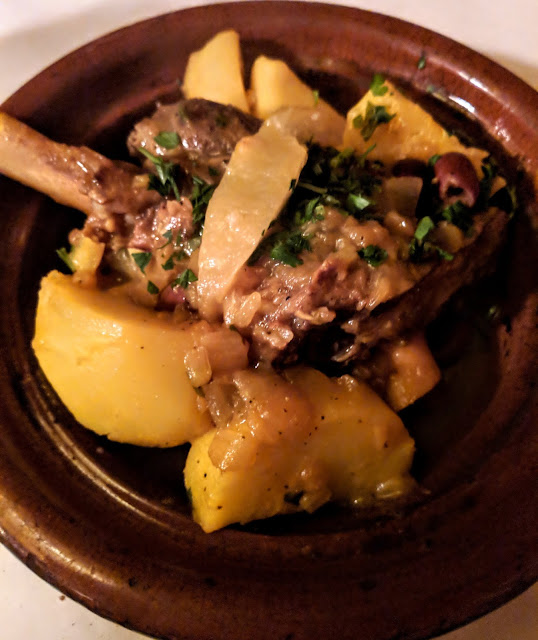 no photos but the Bastilla was authentic and good - Phil seemed to like his shrimp and Uncle Walt had the Harira which he liked as well. 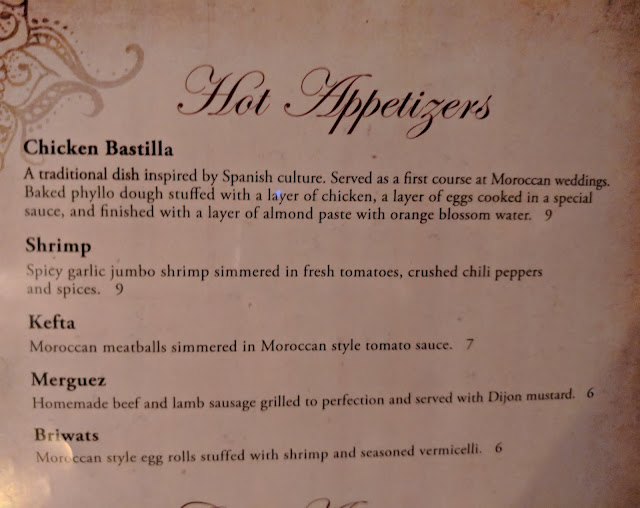 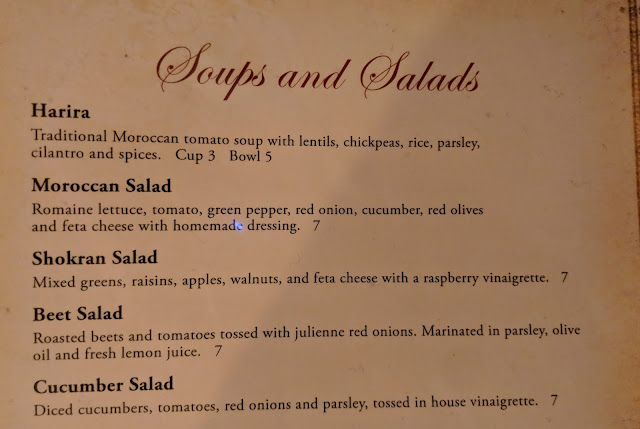 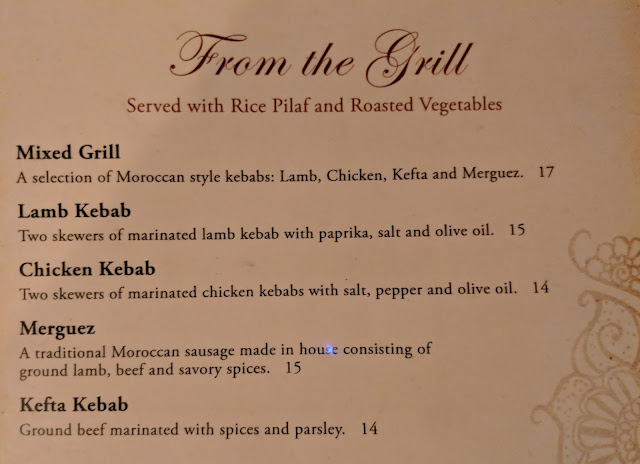 I would go back when in the mood for that type of food but order carefully.  If you are a lamb lover this would be a good pick but if you feel about lamb the way I do you may want to be picky about your choice of a main... probably should have ordered the chicken kebab...LOL

anyway- it ran the gamut this week- starting at the Casino Club and then Teitur with Ron & Mary and then three more evenings out... maybe even I have reached my limit on social plans.... LOL- I know Phil has not...  as he left for an evening of music with friends to be followed by a full day of music and festivities around the anniversary of WFMT's Folkstage with a special afternoon concert.

Next week we start off with an event for charity "Pause for the Cause" with a collaboration dinner of the chef's from Oriole and S.K.Y.  Then we have a visit from brother Larry (we have booked one night at El Ideas) - he hasn't yet seen our condo in Chicago as Hurricane Irma disrupted plans to come... so here we are in our third summer finally being able to host him!
Posted by TOR at 5:53 PM