There is absolutely no black or white in the Theater WIT production of Admissions.  It is all shades of grey. 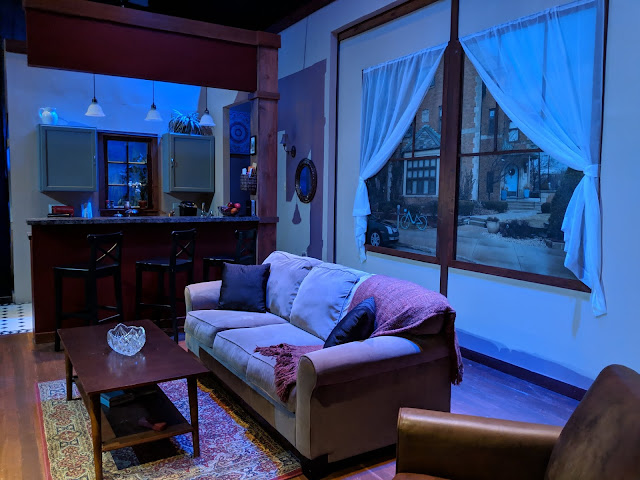 Here is the gist of the plot- 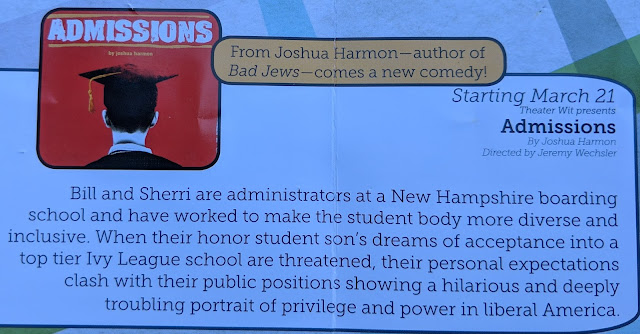 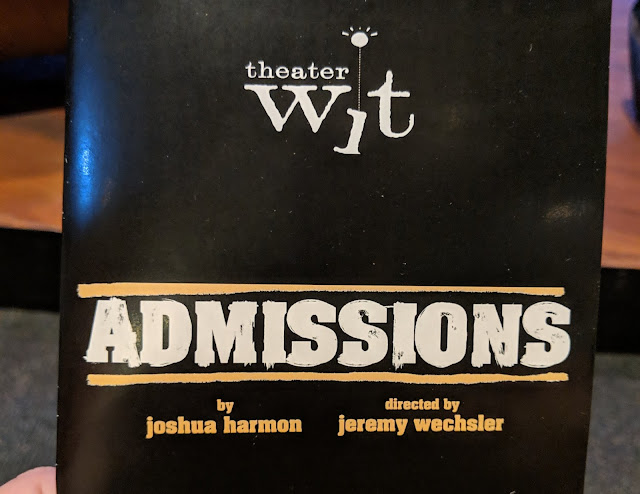 Outstanding performances by the entire cast but especially the one by Kyle Curry as the student applicant who is the central character of the drama.  While there are plenty of laughs the play really hits hard on a number of issues society faces today - race, white privilege, liberal guilt, discrimination, reverse discrimination, resentment .... a whole panoply of contemporary issues served up with incisive dialogue that (despite the inherent conflicts in positions aired) one could agree with virtually everything said as an individual statement yet the whole asks the question.... Just what do you stand for? What is your answer?

So in the end a multifaceted approach to "Admissions" that gives the audience an experience that is far from comfortable but filled with thought provoking "entertainment" - HIGHLY RECOMMENDED!


here is the newspaper review- from the Tribune by Chris Jones

Edgy, timely 'Admissions' at Theater Wit looks at liberal hypocrisy when it comes to getting your kid into college

Do we all enjoy an exemption from moral, unselfish behavior when it comes to fighting for our own kids? 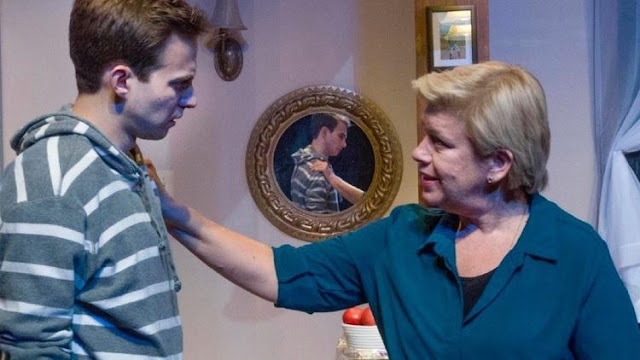 It might seem we’ve decided otherwise — look at the righteous scorn heaped upon those wealthy parents accused of committing fraud so their college-bound teenagers might acquire an undeserved spot in a prestigious university.
But that avoids the main issue. Certainly, rank illegality is beyond most people’s tolerance for the execution of familial influence. But many of the same privileged progressives who have fumed on social media about those perps would not hesitate to call in a favor, or make a phone call to a principal, in order to enhance the educational opportunities coming the way of their own offspring. The arguments over college admissions are not dissimilar to those over nuclear weapons; no one wants to unilaterally disarm. And why should they? Is this not still a capitalist society where we are are free to leverage whatever we can? Even our race?
Those are the incendiary issues in play in Joshua Harmon’s feisty drama “Admissions,” one of the few plays in the liberal theater world with the courage to tackle some progressive orthodoxies, which might explain why its lively Chicago premiere is at Theater Wit on Belmont Avenue under the direction of Jeremy Wechsler, rather than at one of the bigger companies. It’s likely to get tongues wagging among the North Side monied set, especially rich parents who spend time in coffee clatches trying to figure out the new boundaries of what they should and shouldn’t do. 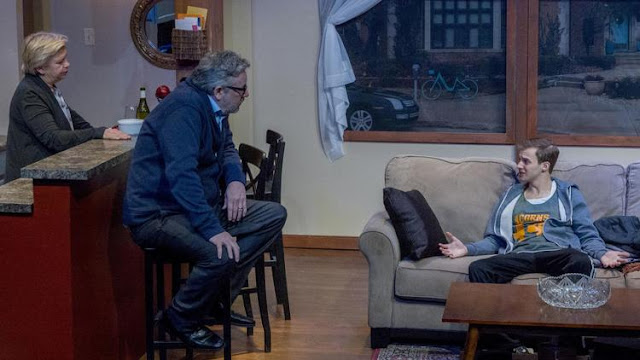 Harmon sets his 2018 play at a posh college-prep school where a married couple, well aware of the leg up conferred by top-tier colleges, pretty much run the joint. Bill (Steven Walker) is the head of school. Sherri (Meighan Gerachis) is the head of admissions, and makes sure that minorities who “read as” minorities prominently are featured in the recruitment brochure, even down to counting the number of pictures.
But familial angst ensues when this white couple’s smart kid, Charlie (Kyle Curry), doesn’t get into Yale, unlike one of the school’s other students, an African-American kid whom Charlie likes but argues has inferior test scores. Thrown into a tizzy by what he perceives to be rank unfairness, Charlie then threatens to abdicate from the game of snagging spots at prestigious colleges, thus compromising his own future, arguing that’s a logical reaction to a system that claims to be a meritocracy but actually has a narrow definition of privilege.
So what would you do if you were Charlie’s parents?
That’s the question of the play, although Curry, a fine young actor given a gift of a monologue here, certainly keeps you invested in what is transpiring inside Charlie’s head. His performance is strong enough to constantly keep you thinking about how the next generation is absorbing our current angst around diversity, equity and inclusion.
The weakness of “Admissions” is that it does not have a non-white character to explain or describe anything to Charlie, or to the audience for that matter. I found that bothersome throughout, although I suspect Harmon would say he specifically wanted to write about the hypocrisy of white liberals, making the point that these flailings are all the more inept because the debates often take place with no person of color in the room. (After all, the people in power still are one generation behind the primary impetuses for needed change.)
Harmon’s not the first satiric writer to delve into this equity-capitalist paradox — wholly unresolved in modern American life — and I’d refer you to Young Jean Lee’s “Straight White Men” for the most incisive exploration.
Wechsler's production at Theater Wit is a bit fussy, physically, but it’s fast-paced, provocative and, crucially, acted throughout with the right combination of intellectual smugness, personal vulnerability and familial love.
Plenty to argue about in the bar afterward.
Later that evening we met Jenny & Eric for dinner in Chinatown at DOLO and had a number of good dishes although the Easter Sunday crowd had consumed most of the options for live seafood... 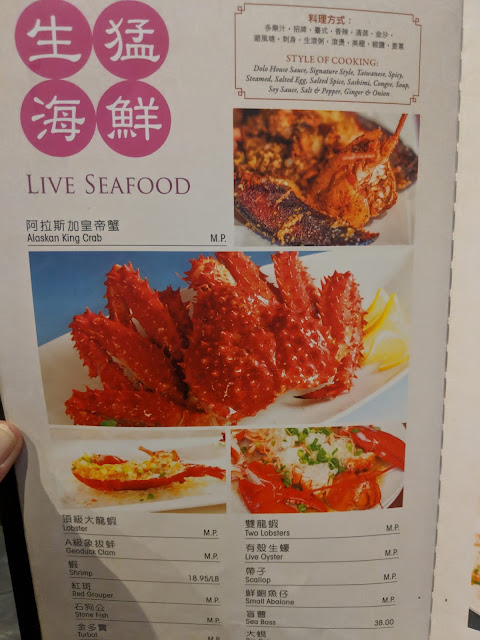 Then on Monday night we had dinner with Mike & Leslie- in from Houston and Madison respectively and went to Kiki's Bistro - a lovely meal and good company- catching up on life, the night before Leslie had business here in town. 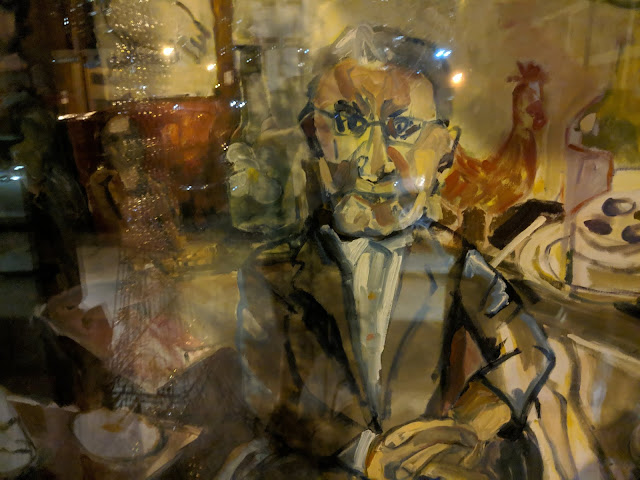 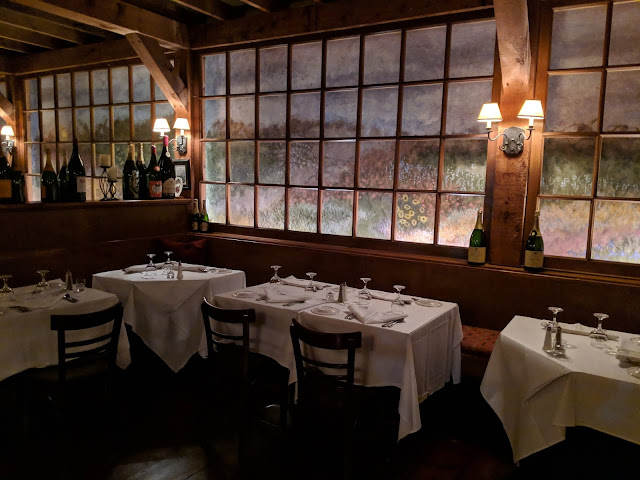 We had four excellent wines to share including a white Chateauneuf de Pape and a 90 Vosne Romanee... #lifeisgood. Tonight we are off to Sheila & Mary's home to see Laure, Arno, Alix and Hugo who are visiting from Paris and NYC.  Tomorrow I return to Sarasota to close up our condo for the summer.  So we manage to stay busy...
Posted by TOR at 2:41 PM