just made me angry

it just made me angry

The main character a young woman with a child finds a crappy apartment by lying to the landlady about not having any children and not having a husband/boyfriend. She works at a dive taco place called Casa di Taco House (yes jokes are made) and aspires to becoming the assistant manager after having worked there for a number of years.

She is in desperate financial straits which are never quite explained - sure she works in a low wage menial job but she keeps leaving the stage to go to work so it would appear she was working a good number of hours. And she seemed to respond to the requests for shift changes etc (thereby necessitating child care for her four year old.)  So if she is reliable and amenable - in today's economy (and there is no reference to any other time frame) logic would have it that she would be AT LEAST an assistant manager.  So why is she so strapped for cash that she let's her erstwhile boyfriend who keeps dropping in to help out with the kid pay her rent and beat her up?

She lost her last apartment due to an eviction when the boyfriend ended up beating her up and destroying the apartment....

As played this woman is smart - funny - reasonably well spoken - reliable and works for a living with no reason whatsoever to put up with being someone's punching bag.  Her landlady tries to make this perfectly clear to her but she doesn't listen and ends up being evicted from yet another place - owing back rent and having had the boyfriend beat her up and injure an older man who lives downstairs.

The landlady - despite her own tenuous circumstances that keep her a slumlord - aspires to more and wants to help the main character to do so as well.  In the end though she has to protect herself from the slide into the life the main character is leading and that she came from.

NO winners in this play and while the climb is uphill for everyone there seems no reason (within the confines of what we are given of the characters backgrounds) that the main character should not be able to escape the abusive boyfriend.... and hence my anger.

only one oblique reference to any social services  belies the reality of the resources available to domestic violence victims - and that pissed me off too.....

on with the show- up next a show with a timely topic - Admissions at Theater WIT tomorrow- Hollywood and rich people scandal in the headlines just as this play was premiering at
WIT and even better it was written by one of my favorite playwrights - the author of Significant Other which I LOVED! 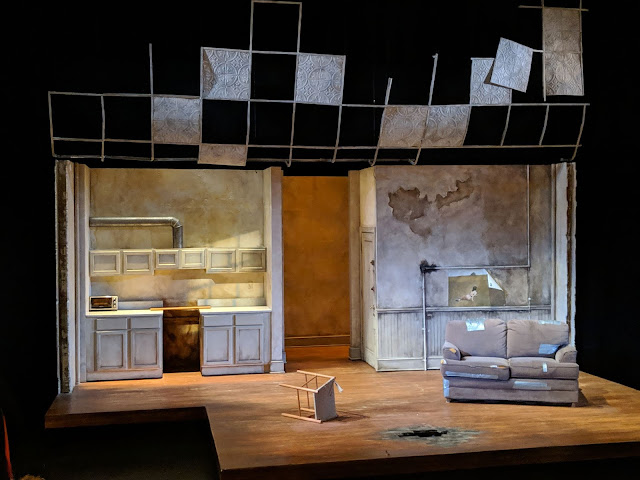 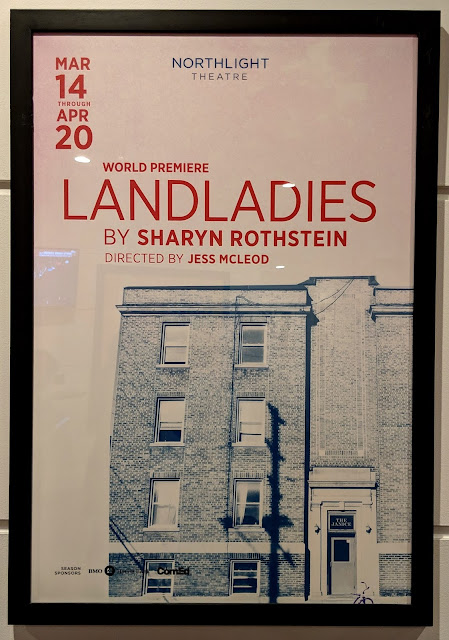 So my last night in Chicago in 2017... I went off to the theater as Phil went off to a concert with his WFMT buds at the Old Town School... 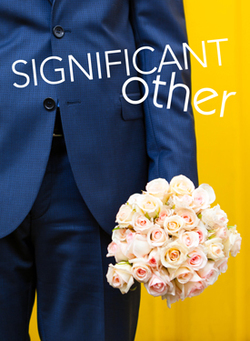 Here is the summary from the theater's website-
Significant Other - By Joshua Harmon - Directed by Keira Fromm -Theater Wit
Jordan Berman is single gay man in New York City. Mr. Right is nowhere on his horizons. As he's nearing his 30's, his close group of girlfriends begin getting married en masse. What happens when you feel like life is leaving you behind but you're still expected to be at the forefront cheering on your friends on their perfect wedding day? Significant Other is a bittersweet comedy about friendship, single-hood, and hoping you're not the one choking on car exhaust as the "Just Married" sign disappears from view.

Here is my report- I laughed and I cried sometimes at the same time! The leading man deserves an award for his incredibly touching performance as the guy who love (so far) has passed by... there was such sweetness and yet incredible sadness.... being in the age of late twenties and early thirties is the hardest time of many people's lives and mostly because you can't see what the future holds - as his grandma said- "it's a long book and the next chapter hasn't started yet..."

really a wonderful play - hope it is a HUGE hit for them because this one deserves a large audience! 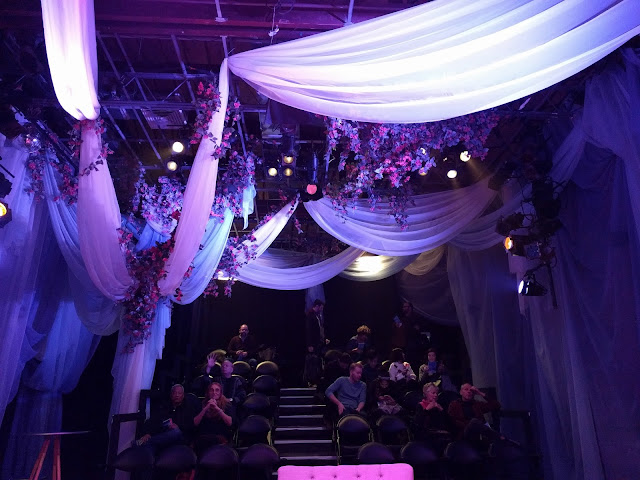 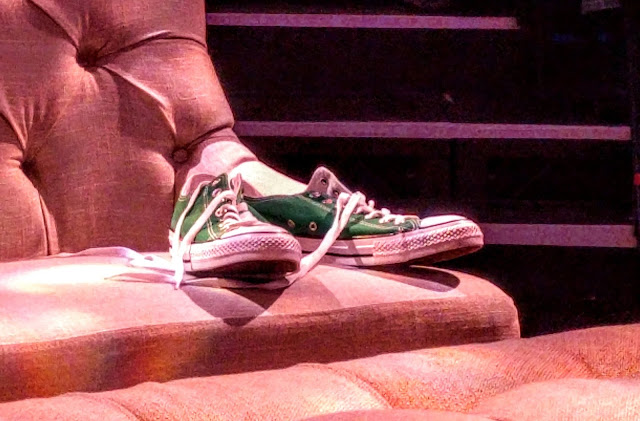 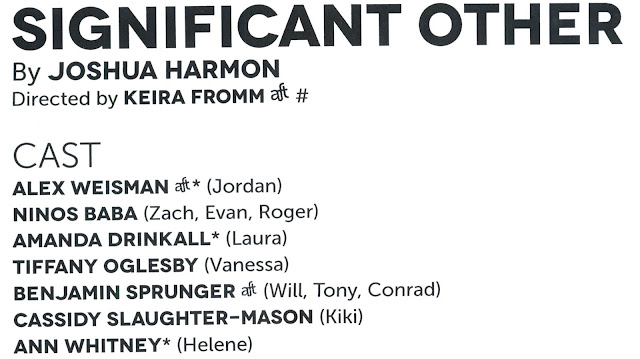 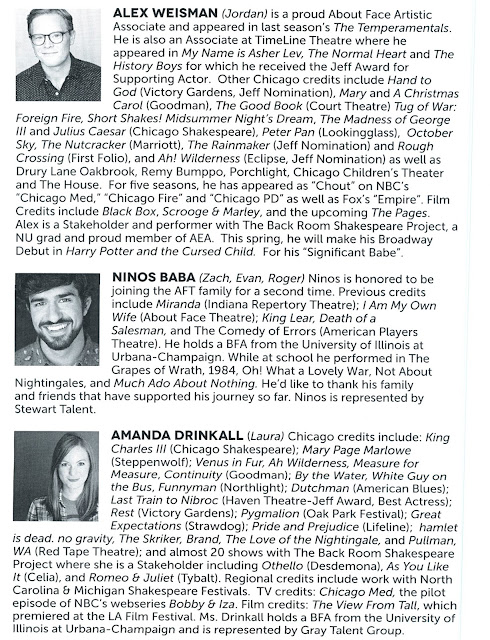 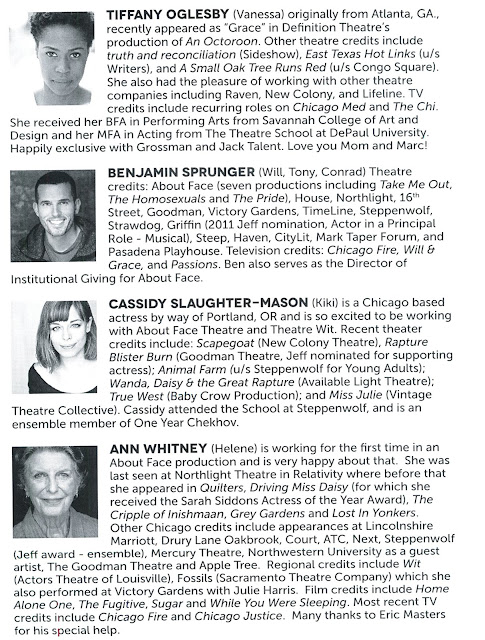 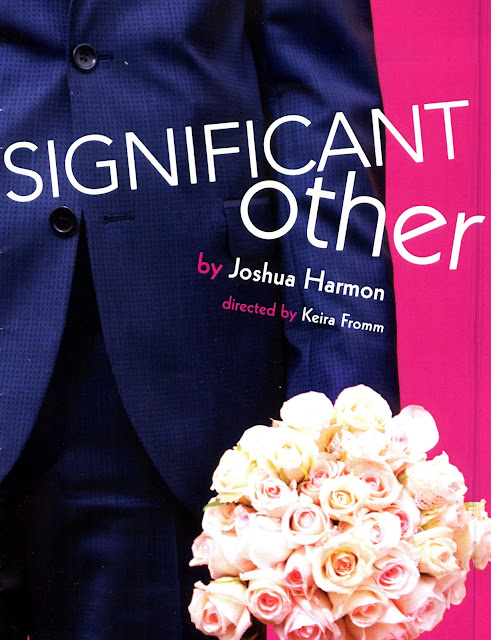 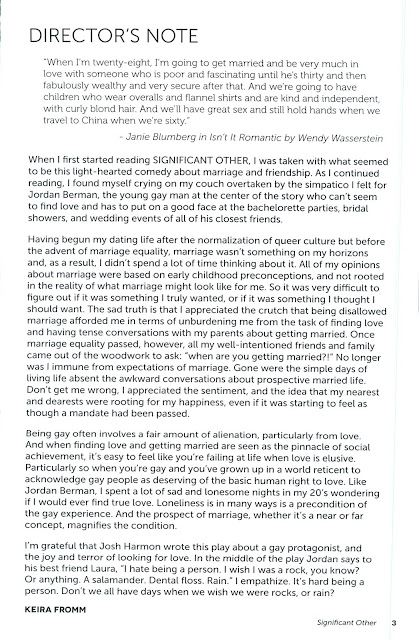