of the year- finally!  my new year's resolution is not to have anyone I love die this year but I can tell this will be one that I can't keep.  mostly because I can't control it and then because our dear friend Joe entered hospice yesterday.  I cried because I thought he was going to make it for a while longer- like my sister he has lung cancer that has gone to his brain, but unlike my sister, who was gone in a little over three months from being diagnosed Joe has lived two more years. (later note- Joe died 12/31/2010)

tough year and I am ready for it to be over.

but bringing my focus back to the positive for the year there were some great times and many blessings in no particular order and certainly not an exhaustive list:

I have a really really wonderful loving supportive husband who has been incredibly steadfast during the roughest of years.

my friend Tom and I got to spend a week together just driving and talking and exploring the byways of Tennessee.

we made great new friends in Sheila and Mary and our friends Laure & Arno, who introduced us to them, have been such loving support for me throughout the year.

we had a fabulous trip to Argentina with Chuck & Georgia and a lovely trip in the spring to Paris.

I was honored by my colleagues with several awards in July as I moved into an Of Counsel role at work.

my mother had another year (and a half) after her last brush with death and it was a good one up until the very end.

we had a really fun long weekend in NYC for our anniversary and saw the kids as well as an amazing magic show by the Millionaire's Magician at the Waldorf Towers.

we had wonderful times with friends Dick & Ali and our wine group folks for Memorial day, the 4th of July and Labor day and probably a few more I forgot to mention.

the last five months of my working full time were also a busy time- preparing for going part time.

going back and forth to Cincinnati an average of once a month kept me busy as well - I thought when I went from full to part time I would have all kinds of extra time- LOL- well I am still hoping for some more of that so that I can catch up on projects I have on my list- but so far my one project (cleaning out the third floor) has stalled for months- I got about 90% done and then couldn't figure out what to do with the left over junk- so that one will have to wait a bit longer.

one year over Christmas and New Year we went to Singapore and Hong Kong.  I took this photo from our hotel room window in Hong Kong I liked the way the pool at the hotel next door looked and the curving lines of the lights at street level. 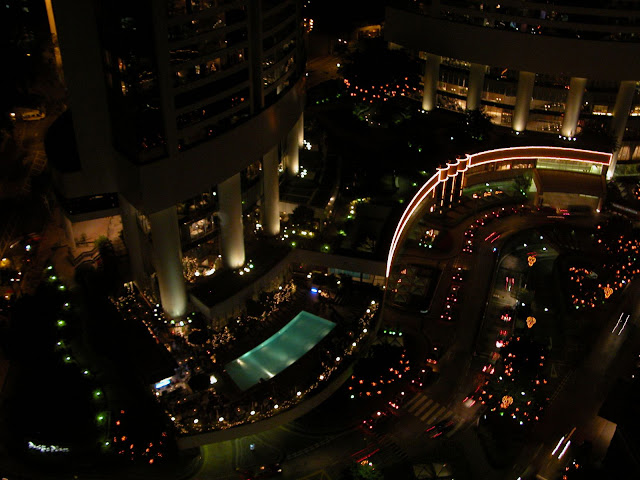 and here is a view of Hong Kong from the water as we were taking the Star Ferry across from Kowloon. 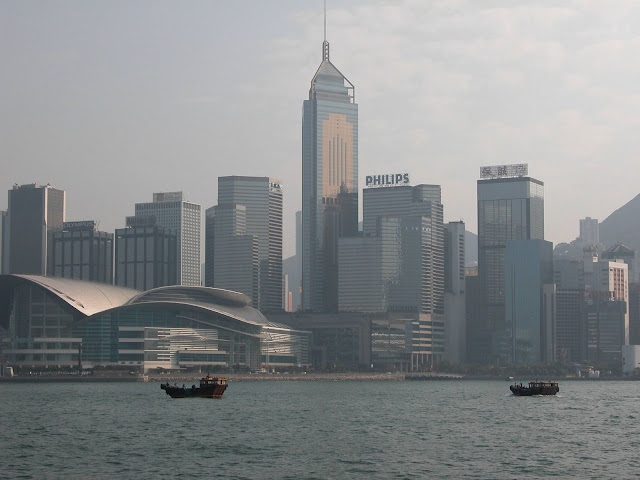 lots to do to get ready for our time away in Florida - along with entertaining our guests from Germany.  so I better get back to cooking - and the sun is rising - well truth be told it is getting lighter but since it is raining I don't yet see the sun.  The thunder storms have passed through though and it is supposed to clear up today.
Posted by TOR at 7:33 AM