journey that I have taken was our trip to Burma (Myanmar)  there is a debate about whether to travel there or not but we came down on the side of the yea-sayers - the argument being that some contact with free society is better than none.  our guide Zaw was spectacular and although communication has been sparse over the years we do know he made it through the times of the most recent violence and had actually gotten a student visa for limited study in the UK.

I have two photos from there that are among my favorites.

the first is one of a sunset over a bridge - we were running behind schedule on this day in Mandalay having dawdled somewhere interesting and Zaw was very concerned that we were going to miss the sunset on the river.  As the car entered the area he had the driver go as far along the path as we could and it appeared that we had missed the sunset because we were behind a large stand of trees- when we exited the car Zaw urged us along the path and around a bend - when we took the turn we saw this sight- the beautiful sunset and the silhouette of the bridge with locals using the foot bridge to get from one side of the river to the other. 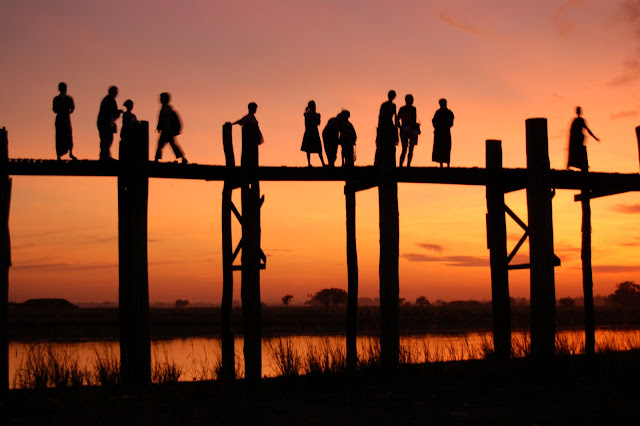 this is the view down the river that we had rushed for- greeting the sun kissed temple and the blazing orange water. 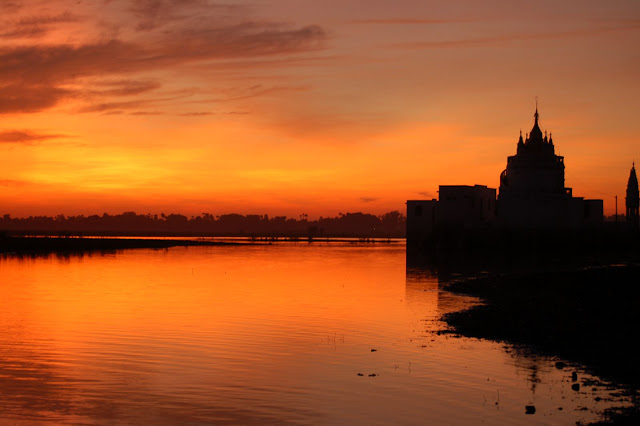 and while this next one doesn't rank in my favorite artistic photos it does rank on my list of fun things.  we had been traveling all day on Inle Lake where the one legged rowers caught fish and the villages had floating vegetable gardens.  towards the end of the day we stopped at a monastery and found an unusual sight.  the place is known as jumping cat monastery.  years back one of the monks had taken to training some of the temple cats to jump through a little hoop and when he had success people came to see the "trick" and made donations.  now the monk has died but the tradition continues.  not all the monastery cats do the jumping so the ones that do are "stars" - the others mill around watching - sometimes learning and sometimes not.  either way they get fed and all appeared content. 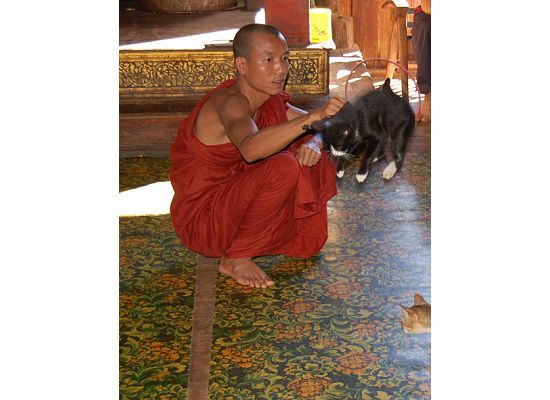 I may write more about Burma later as I found it a most fascinating country.
Posted by TOR at 3:34 PM