Today – fabulous day in the classic OAT manner (that is the acronym of the travel company- Overseas Adventure Travel) – we leave the horrid Vegas style town and head to Kairouan.  Along the way we hear a lot about olive oil as the road is solidly lined with olive groves pretty much the whole way.  Tunisia is the fourth largest olive oil producer in the world (second if you count the EU as one per Mohamed – LOL)
Our first stop has nothing to do with olive oil as we stop at the butcher shop where we learn that the heads of the butchered animals hang out front so everyone will know it is freshly slaughtered and butchered.  We see several camel heads – Max gets ill  and goes to the bus – the rest of us walk next door to the “sweet shop” where they sell various middle eastern sweets similar in style to baklava. We try two kinds and head onward. 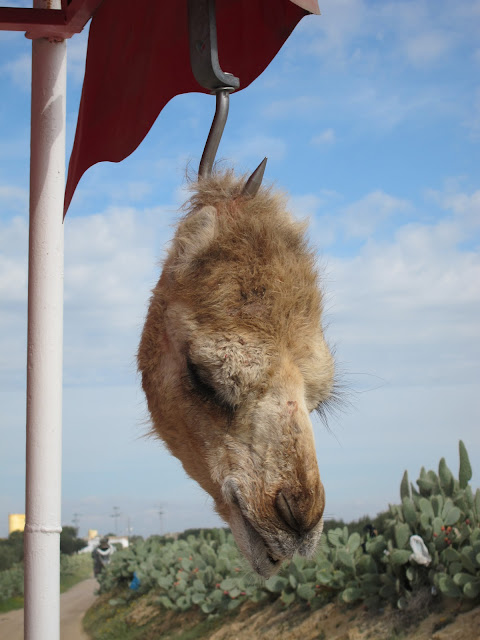 Then we get to the outskirts of town and stop for a photo op- La Bib (the Tunisian “Smokey the bear”) greets everyone in many locations throughout the country.  He is a cartoon style character of a desert fox I think – will have to double check that one to be sure.  Also there are giant carpets in a sculpture.  This is the Tunisian carpet making center.  Here is where Persian settled centuries ago and the craft has been handed down through generations.
After a quick stop for camera tickets we go to the Great Mosque for a tour and a discussion with the Imam.  We spent 90 minutes with him and he was a reasonable man but had a tough crowd of working women to deal with.  We have a retired professor, two business consultants and a lawyer in the four women of the group – the four men are retired business man/engineer and a banker, a teacher and a doctor.  The discussion was lively and very open.  All left feeling positive about the interchange.  We are off to our home hosted lunch.
The family that is hosting us has a grandmother and her son (who owns a café in town) his wife and their daughter who is 15.  They have three other children – one married daughter who has two children and two sons who help in the father’s business.  Our lunch starts with vegetable soup which is very flavorful and then brique (a pastry of sorts – this one with tuna and parsley and egg.) Then we are served a couscous with beef and vegetables and fruit for dessert.
After lunch we move to the courtyard for the giving of gifts and discussions with the family.  The wife brings out photos of the grandchildren and the grandmother brings out newspaper clippings about the former president and his family and makes some remarks about them which are negative in general but with sympathy for the six year old son who is now uprooted (with only several billion of assets to live on for the rest of his life – per Mohamed)  Then the grandmother disappears and we all think she has tired as she is quite old.  WE go on to show on a map where we each come from and discuss the gifts we have brought for them.  Just as we are finishing up the grandmother returns and she is wrapped up in a headscarf and she starts to talk very loudly and with great force and she tells us this is how Khadafi sounds – she is like a standup comic.   We all absolutely crack up and then she goes on and does an Elvis imitation that she calls Michael Jackson (it is the name she knows) and has us howling.  I have photos to verify this.  We are all delighted with the home hosted segment and leave very pleased with our fun time at lunch. 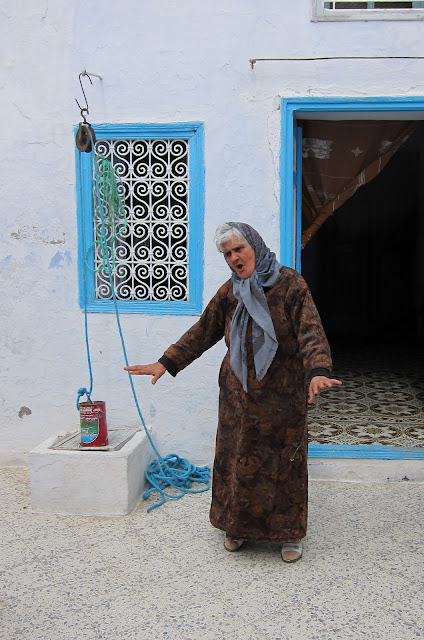 Then we head to the hotel to make a toilet stop in the lobby before running back out to head to the carpet workshop.  We all are aware of the need to help these people get their tourism industry backup and running and so four of six buy including me – a small rug for the bathroom in terra cotta and dark blue.  Dick buys a larger and even more lovely carpet and Jennifer buys small and lovely one and Howard & Carol find the one they think will be a perfect wall hanging.   So we help out the economy and Mohamed says it is very much appreciated as our small group bought four items when most will have only one sale.
Back to the hotel for another 20 minutes or so to get settled in before leaving for a walk around town to see the copper smiths and then a medina tour.  Lots to see and absorb.  This medina is quite a bit livelier than the one in Tunis.  While not everything is open and bustling there are still artisans working making shoes and barbers still cutting hair and shaving men.  On the way back to the hotel we run into our family hosts heading to the medina and we greet each other warmly – they get a chance to meet Max who didn’t come for lunch.
We head back to the hotel and have another 30 -35 minutes before our 7:30 dinner hour.  Dinner is here in the hotel and we have veg soup and brique – LOL - along with bread Mohamed bought in the medina from a street vendor.  Then the meal is choice of swordfish or turkey or hamburger.  Five of us take the fish – Jim and Howard take turkey and Max does the burger.
The finish is a crème caramel which is nice but we are stuffed at this point.  Upstairs to get some of these notes typed up for later posting and to make backup copies of photos and also to prepare for the journey to Monastir  and El Jem tomorrow.
Since there is no internet here I will do the posts alone in the lobby on wifi in the morning and then come back later and add photos when I get both more time and a better connection (don’t know when that will be…)
Posted by TOR at 1:16 AM