Cap Bon peninsula- left hotel around 8 and headed out of town – traveled through lush beautiful farm land and orchards and groves.  Atlas Mountains in the distance are on one side and the Mediterranean on the other side all day long.  We stop for some oranges at a road side stand to buy from a guy with one eye and no teeth (not kidding) Mohamed says “he cheated us” LOL we say you cannot be cheated by a guy with one eye and no teeth. LOL 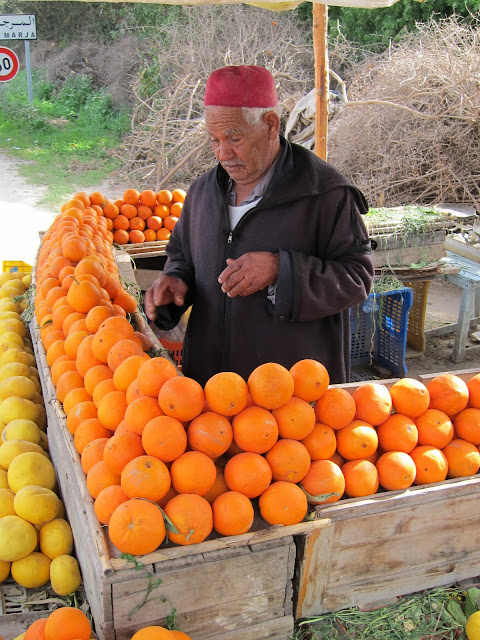 Head to Punic ruins of Kerkouane- these are ruins at the tip of Cap Bon and it is a peaceful serene setting right on the sea.  We explore ruins with no one else visiting – in Dougga there were a few others in the site with us – here no one else.  Then we go on for lunch at the Toro fish restaurant in Kelibia.  We start with an EXCELLENT barley soup with lots of seafood in the soup.   Then swordfish and finally Chocolate Mousse.  From lunch we got to the commercial fishing port where we see the boats- obviously the fishermen have all gone home by 2PM – then on to Nabeul.
This is the place for pottery making- but first and important stop at Mohamed’s favorite ice cream shop where he treats for gelato for all. Very good!  Then we visit the pottery studio where they are throwing all kinds of pots on wheels and firing in the kilns and glazing after decorating by hand. Jennifer and I support local economy with small purchases. 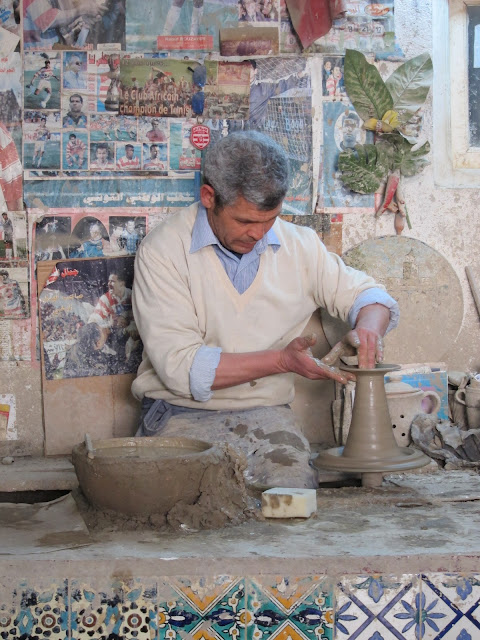 From there we traveled to Hammamet. A horrible place – kind of like the Vegas of Tunisia- casino and big resort hotels that bill themselves as five stars but barely meet three star standards.  Place is focused to holiday makers not travelers.  Some of the group hates the place (myself included) – they have built a fake medina in Hammamet Yasime one of three resort areas in town.  It is so awful they have fake camels outside and fake elephants etc..
However, Jennifer and I had to change rooms because at 4:30 in the afternoon the rooms had not been cleaned and then when they said they had cleaned them there was still garbage on the balcony.  It reminded me very much of our hotel in the Dead Sea area in Israel.  Awful smoking low life tourists who got a bargain off season price for a decent hotel who come and smoke up the lobby while talking very loudly.  The safe costs 2.500 dinars for one night- and the place hadn’t seen a vacuum in a week or more.  Thank god it is only a stay of a single night.
The highlight of our time there was definitely dinner at the fabulous Charlemagne.  Our starters of shrimp bisque and moules which we shared were first rate.  I had the St. Pierre and Jen had grilled lamb- both were excellent! And beautiful enough for photos.  Our dessert was a lemon mousse with mint – also very good.  The wine was Magon again but this time the reserve.  All in all it made the trip to Hammamet about 30% worthwhile may be even more because when we arrived at the restaurant they graciously turned on the TV for us.  We asked for it to be turned off.  We were the only ones there.  The good waiter then offered the piano which apparently runs on software that must have lists to choose from.  For us he chose the list for two middle aged American women and it played the Eagles songbook followed by the Simon & Garfunkel songbook.  It was a perfect background for our extended discussions of what various things are called en Francais.  We leave the restaurant perked up by an excellent meal.
After doing some money changing we retire to our chambers and agree to meet in the AM - Tomorrow on to Kairouan.
Posted by TOR at 1:15 AM