So to follow up
Jennifer and I met for dinner somewhat later- seeking catch up time since as friends we see each other at most twice a year.  We ordered a bottle of red wine- a different one this time with another effusive label on the back describing the micro climate.  However, we did manage to drink the whole 750 over the course of our meal.  Jennifer had lamb and I had a seafood frite dish with fish, mussels and prawns.  We had a complete assortment of starters including a really yummy char-grilled eggplant spread that we deemed “worthy’”
We caught up on family matters – especially mother matters. Leaving the problems of the world to be solved another time, we headed off to our rooms and to pack.  In the morning I posted the previous blog entry and went to breakfast.  The breakfasts have gotten worse each and every day – IMO.  The bread and rolls which were excellent in Tunis have now deteriorated into something like Italian bread, it looks like bread but tastes of nothing- desperately needs salt and thank god for the olive oil.  Speaking of olive oil – during the discussion on olive oil pressing and olive growing we learned that Newman’s Own Organic is made of Tunisian olive oil (which is a fun fact to follow up on when we get home.)
Had a yogurt and slice of bread with the meat we are calling bologna but really have no idea what it is… a couple of cups of tepid coffee and we are off for the day.
Over the last week Mohamed has been describing the Tunisian breed of sheep which is quite unique.  It has a very fat tail and is found only here (although a few were gifted to the US and cross bred with some Pennsylvania sheep.)  These sheep need shepherds to watch over them because they cannot reproduce on their own as the fat tail blocks the ram from inseminating the ewe.  They must be assisted by the shepherd who holds the fat tail off to the side so the ram can mount the ewe.  Needless to say when Mohamed told this story the first time we were all agog.  Mohamed was raised on a farm outside of Hammamet (the Vegas style place) and knows a bit about this.
So before we leave the area of the Tunisian sheep and go where only Libyan thin tailed sheep are found we all want to take a photo of the fat tailed sheep.  (I am not making this up- LOL) As we head away from Kairouan towards Sbeitla, Mohamed instructs Hussein the driver to watch out for a good flock of sheep.  Sally spots a flock and calls out and we stop.  Mohamed gets out to talk to the shepherds and then calls us over.  He tells us we are in luck today because not only can we see the sheep, one of the ewes is in heat and he can tell by the way the ram is following her.  He instructs the shepherds to catch the ewe and assist the ram.  This process looks not unlike a Keystone cops movie because we have found inexperienced shepherds who do not know how to do this and were planning on waiting for their dad to come by to assist in the mating.   But, given the audience of American travelers they give it a try.  And although it was unsuccessful we got a lot of photos of the whole thing. 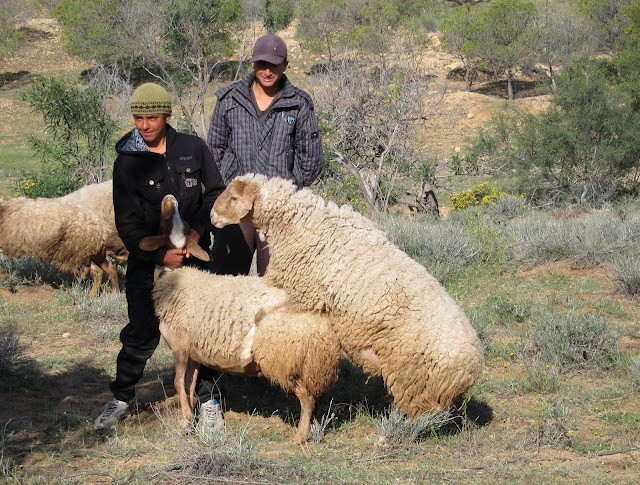 After this excitement we re-board the bus and head to the toilet stop at a gas station along the way. Someday soon this will be a lovely stop for travelers enroute but today it was an unfinished bathroom with no doors on the stalls so we ended up one by one using the facilities.  However that gave us time to peruse the goods at the antique “shop” next door.  Somewhat resembling a junk yard the place had recycled doors and window grills as well as real antiques, some jewelery and some junk from China and India. 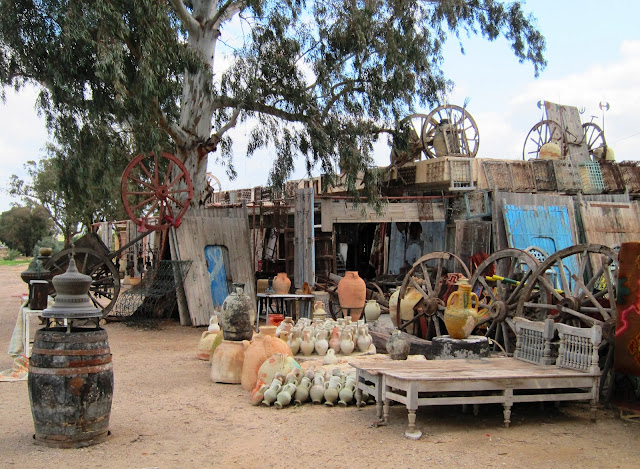 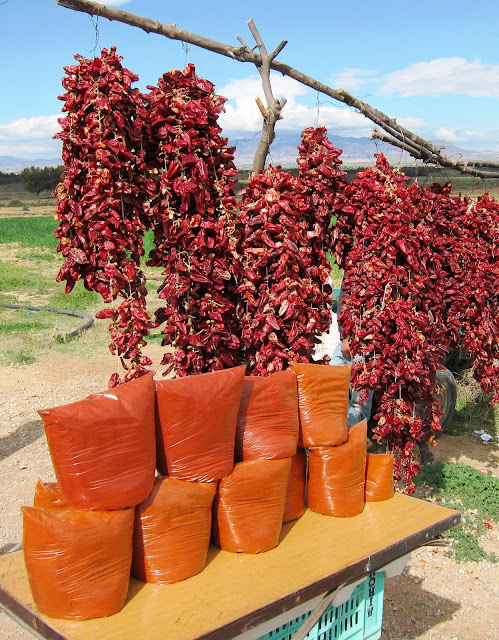 Off again and this time headed to the ruins at Sbeitla, a Roman outpost which is quite well situated near the Kasserine Pass (where WWII fighting took place) and as such was always strategically located. At the ruins we tour a fortified house and the forum and several churches as well as the baths.  Another worthy Roman historical site. 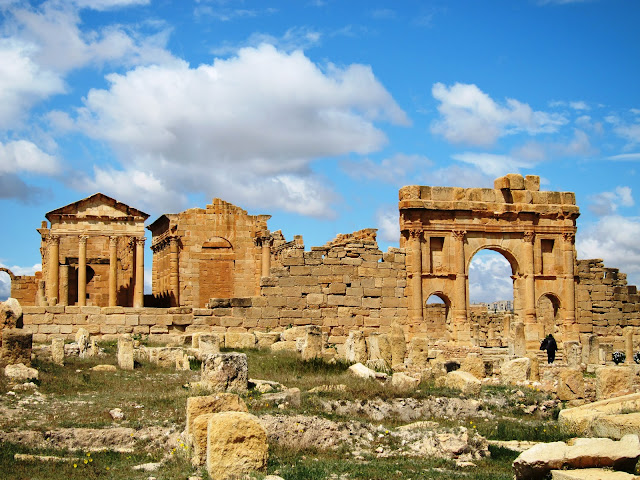 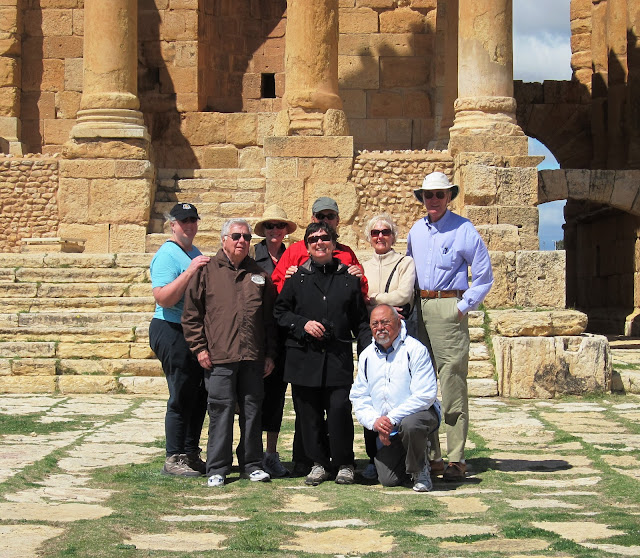 Then on to lunch.  Surprise! We start with soup- LOL this time a broccoli soup mostly and then we have a chicken dish with a tasty red sauce more chile like than marinara.
Back on the bus we head out of town and into the Sahara.  Another quick “pit stop” at another hotel with no guests and we move down the road.  As we approach Tozuer our destination for the next three days, we stop at one of numerous camel crossing signs.  We come into the town from above and see the sea of date palms alongside the large salt flat.   Tonight buffet at the nice hotel where we are staying for the next three nights the Ras El Ain.  Free wi-fi in the lobby so I thought to post this right away.  But first must get photos chosen for the post. and I must include one for Jeremy our first recycling center. 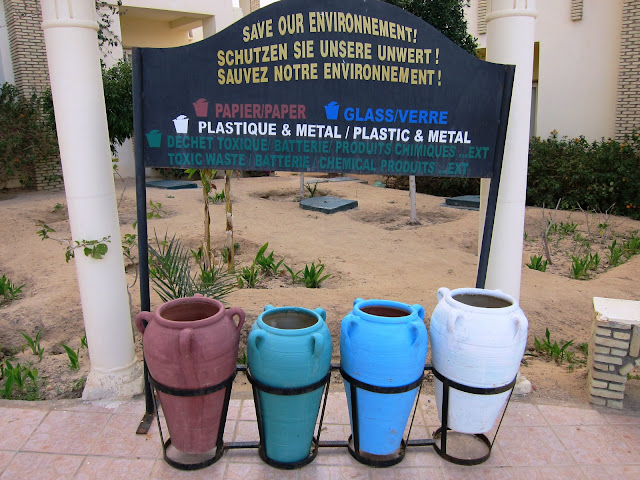 Hope you enjoyed following our day.
Posted by TOR at 12:44 PM