Let's back track slightly- and use the maps: 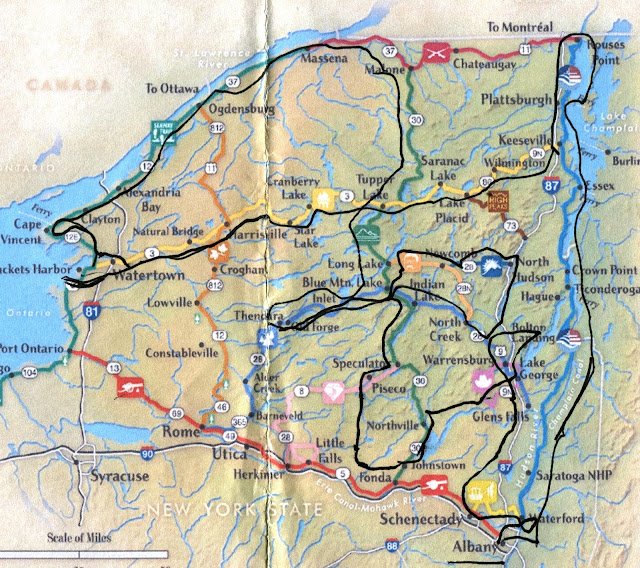 In the above map our entire journey shows a tangle of lines you could never figure out unless you were the navigator (me) or possibly the driver (TB) - but I have broken it down by day in individual cuts to help anyone following along understand the route- so below is day one... Albany to Whitehall- then a left turn on route 4 into VT for the night.... the route follows along the Blue by way to the east (we will catch up with the west part near the end when we see Lake George) 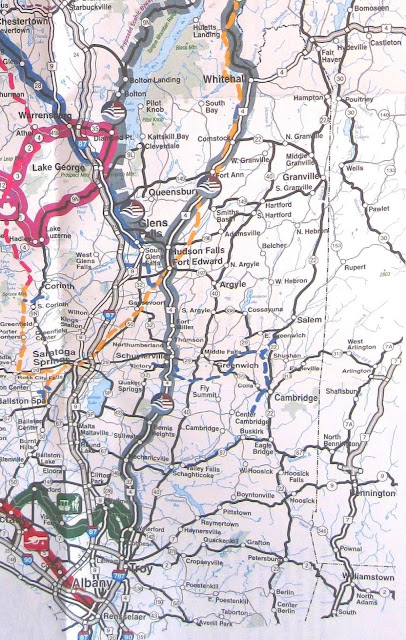 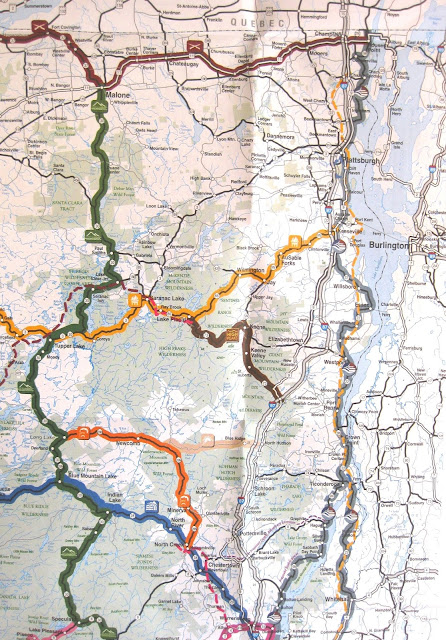 in the last post we had made it as far as the lighthouse at the southern tip of Lake Champlain - from there we headed north- it was already mid afternoon and we really hoped to get to Plattsburgh for the night.... LOL the google maps shows this as roughly 94 miles and so far we had been on the road from Whitehall about five hours...LOL - this is DART travel speed... I laugh when I think of my dad's travel style from our growing up years: get in the car-drive as fast as you can - as long as you can - then stop for the night and get up and do it again - with as few time outs as possible use the bathroom at the food stops and make gas stops as necessary but nothing else until you get THERE. (LOL) 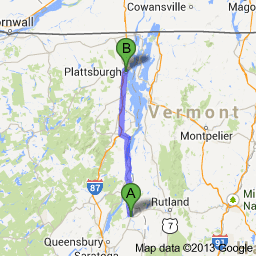 where we are in the day's journey is about half way up where the little jog to the left takes place.  So back to the trip...
we continue along the blue byway (Lakes to Locks)and the next site is Ausable Chasm... which we drive over before we notice it- but as we drive over the WPA era bridge I look out the window and see a lovely waterfall so we turn around and head back to the parking lot and get out to see it...
This entry from wiki-pedia I think sums it up quite nicely-
"Ausable Chasm is a sandstone gorge tourist attraction near Keeseville, New York. The Ausable River runs through it, which then empties into Lake Champlain.
The gorge is about two miles long, and is a minor tourist attraction in the Adirondacks region of Upstate New York. It is called by some[who?], the "Grand Canyon of the East", and is fed by the Rainbow Falls, at its southern extreme."

I especially like the footnote of [who?] LOL - but here is the thing- and we first run into this phenomena right here at the chasm... even thought this is in the ADK Forever Wild park boundaries- this is a privately owned scenic attraction-

excuse me while I digress a bit with some historical and facts and figures kind of stuff- again from wiki-pedia:

"The Adirondack Park is a publicly protected, elliptical area encompassing much of the northeastern lobe of Upstate New York, United States. It is the largest park and the largest state-level protected area in the contiguous United States, and the largest National Historic Landmark.  The park covers some 6.1 million acres, a land area roughly the size of Vermont and greater than the National Parks of Yellowstone, Yosemite, Grand Canyon, Glacier, and Great Smoky Mountains combined. 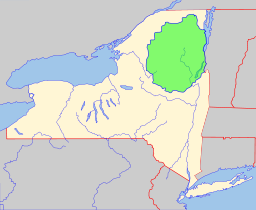 The Adirondack Park boundary, commonly referred to as the 'Blue Line,' contains the entire Adirondack Mountain range, as well as some surrounding areas, all within the state of New York. Not all of the land within the park is owned by the state, although new sections are frequently purchased or donated. State land comprises 2.7 million acres, about 45% of the park's area, including the highest peaks in New York State, as well as Mount Marcy, the highest elevation in the state. About 1 million acres of this is classified as wilderness, with most of the remainder managed under the somewhat less stringent wild forest classification. Villages and hamlets comprise less than 1% of the area of the park; the remaining area of more than 3 million acres is privately held but is generally sparsely developed. There is often no clear demarcation between state, private, and wilderness lands in the park. Signs marking the Adirondack Park boundary can be found on most of the major roads in the region, but there are no entrance gates and no admission fee.

The park has a year-round population of about 130,000 people. Seasonal residents number about 200,000, while an estimated 7-10 million tourists visit the park annually. It is estimated that 84 million people live within a day's drive of the park.  There are more than 3,000 lakes and 30,000 miles of streams and rivers. Many areas within the park are devoid of settlements and distant from usable roads. The park includes over 2,000 miles of hiking trails; these trails comprise the largest trail system in the nation.

With its combination of private and public lands, its large scale and its long history as a place people have tried to coexist with nature, many see the Adirondacks as a model for the ways natural areas with human populations can be protected into the future."

And so a number of the sites are private concessions and the park is not exactly what we think of as park in today's sense of the grand national parks in the west... 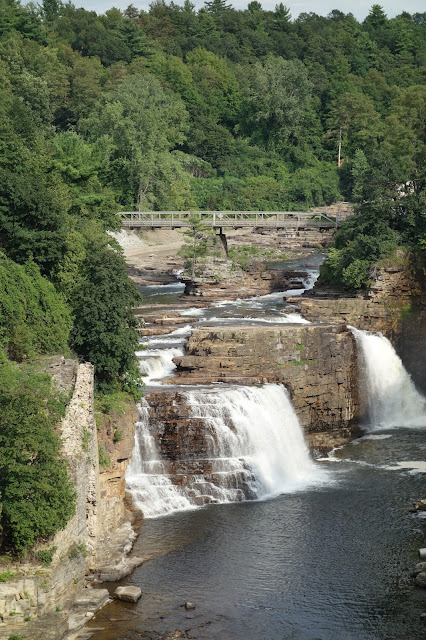 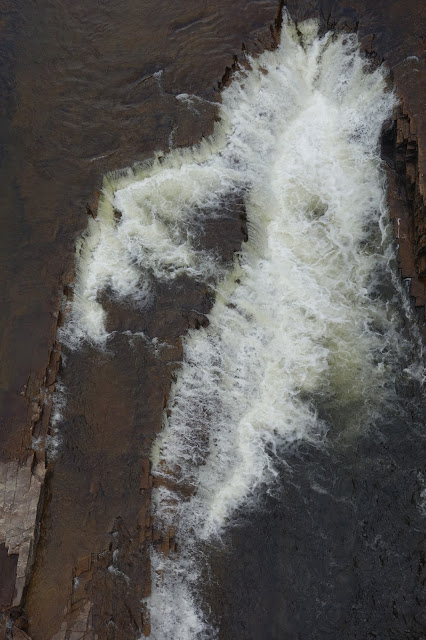 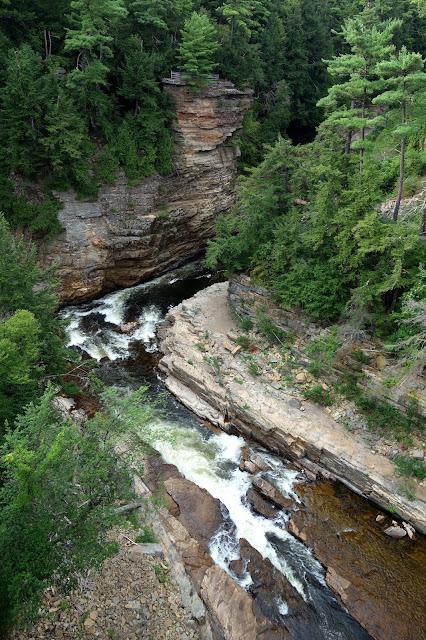 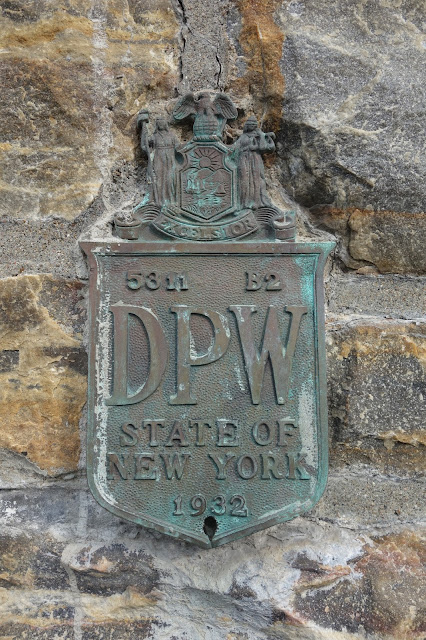 then we headed to one of the ferry crossings of Lake Champlain to get a schedule and further tips on when to best cross etc... the lady at the booth was only minimally helpful but the brochure was much more informative: 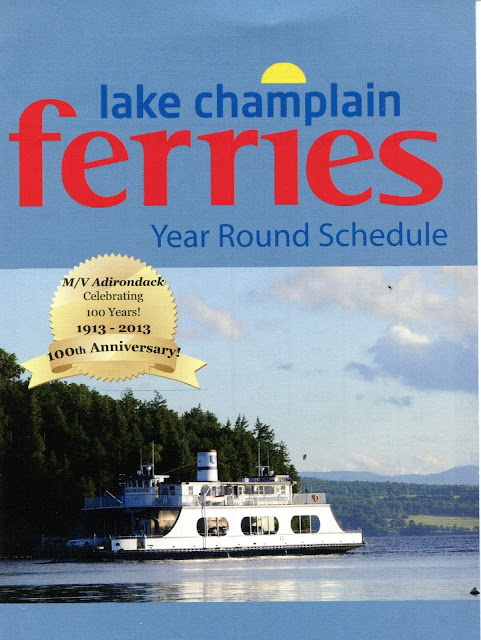 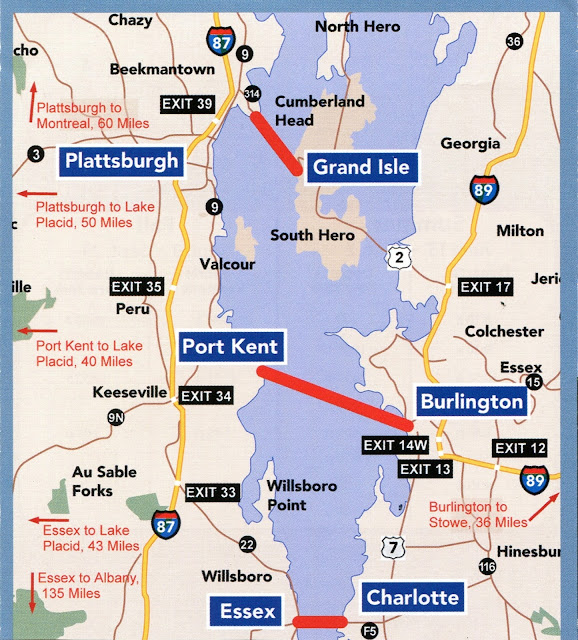 having decided that the ferry to Burlington took too long (1.25 hours) and had the worst wait between ferries if you couldn't get on the first one that came after you got there- we opted for the ferry from Cumberland Head to North Hero, Vermont on Grand Isle to start our following day-

and it was in Plattsburgh that we ran into our first "this is August and vacation time" hotel dilemma... after checking all possible in town hotels we obtain two of the last rooms at the Super8 north of Plattsburgh.  We checked in around 7:20 PM and headed right over to Gus' Diner across the street - because they close at 8 PM...
After a dinner of the Gus' Famous Michigan Red Hots we headed back to the hotel and being (now) savvy travelers booked rooms for the following night (with much difficulty) in Lake Placid - in two different hotels due to availability...but more on that later...

the entrance to the lovely Super 8: 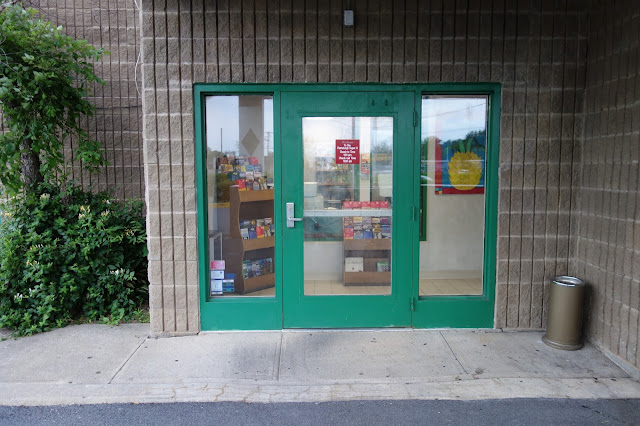 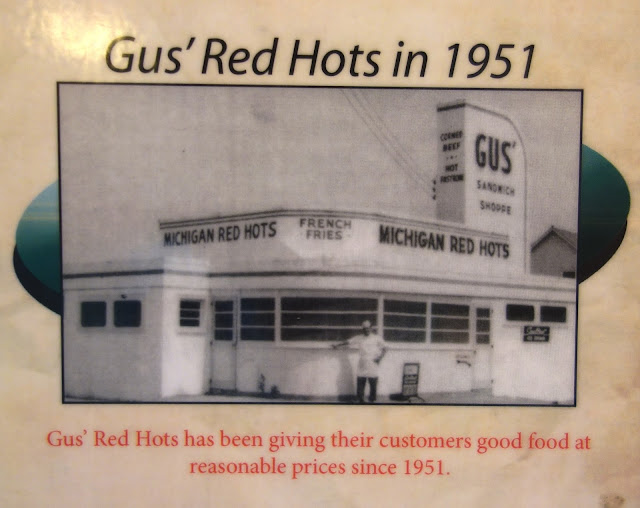 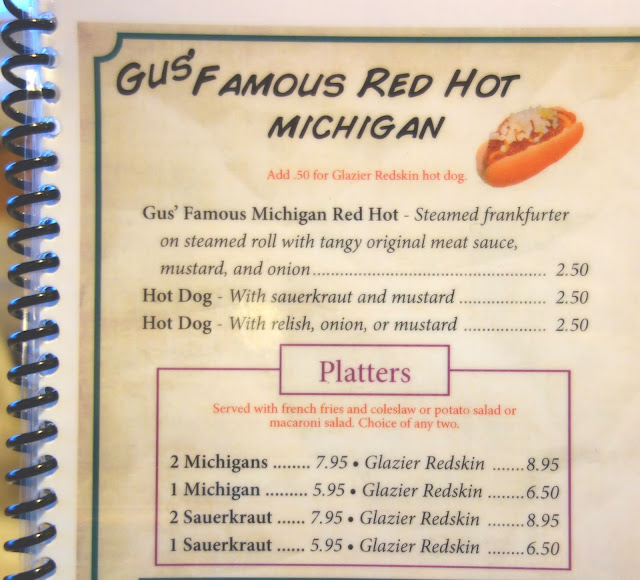 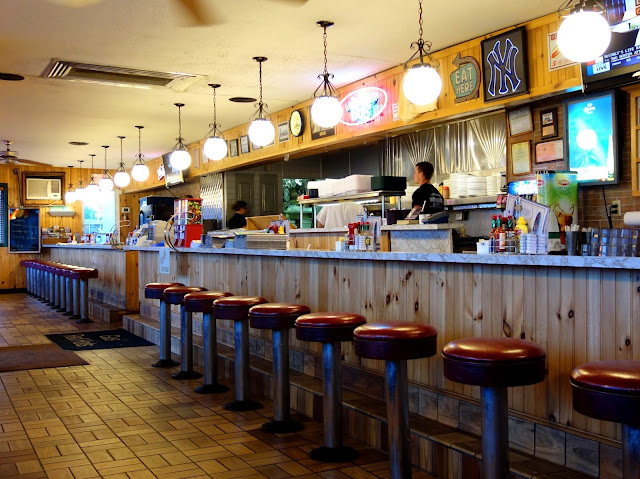 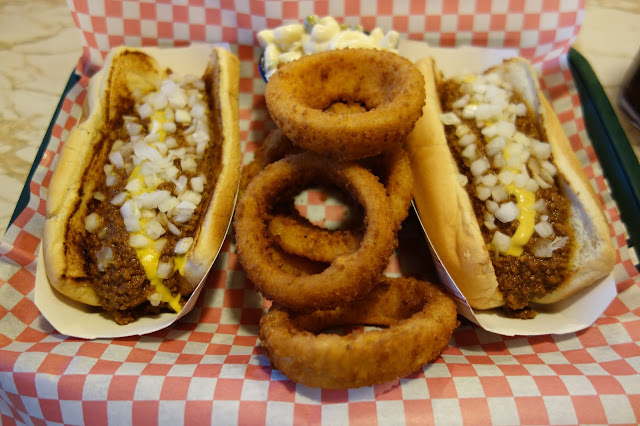 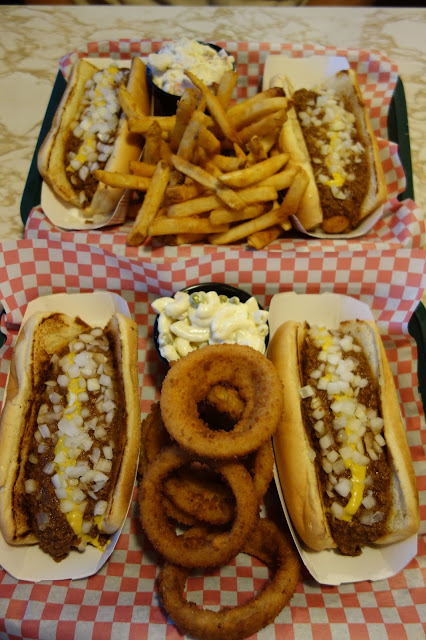 so tomorrow- back for a quick foray into Vermont on Grand Isle in the middle of Lake Champlain and then on to Chazy where there is a AAA "Gem" and finally into the heart of the ADK Park.... stay tuned...
Posted by TOR at 12:15 PM