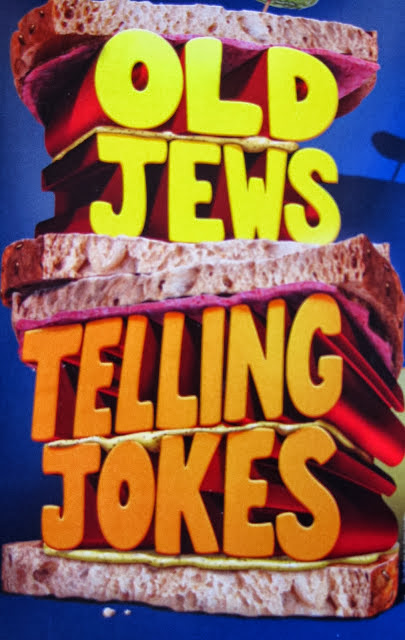 I hadn't been to the RG in more than two decades and had forgotten what a wonderfully intimate venue it is... the last time I was there I saw the incredible John Malkovich in Burn This. And boy did he ever- he completely burned up the stage with his HOT HOT HOT performance. One of the most memorable performances I have ever seen - on stage or on film- really searing.

oddly enough - most of them I had recently heard as a result of catching up on the Jerry Seinfeld web based series Comedians in Cars Getting Coffee.  Which in a round about way, was responsible for getting us to this show...

in the segment with Mel Brooks and Carl Reiner - the tow of them and Jerry have deli at Mel's house one evening and spend the time trading old jokes (many of which are material in this show) and Mel drinks from a coffee mug with the logo of this show and mentions it... so when we were at The Bagel for a pre theater dinner before our recent Time Line outing to see A Raisin in the Sun- there was a promo card at each booth.  I took this as a sign- two references to this show I had never heard of within a few days! We got tickets and went last night.

here is my review- all the performances were good and many of the jokes were funny- but you can save yourself the trip by watching this web based Seinfeld episode of Comedians in Cars Getting Coffee with Mel Brooks and Carl Reiner.

Old Jews is old material and a nice historical perspective on humor but not much more. I commented to Phil as we left that I had been worried about having a coughing fit if I laughed too much - and we reminisced about seeing Jakie Mason at a small club years ago when he was prepping a new act and how we roared to the point of losing our breath.  That was not the case last night. Don't get me wrong - we laughed but the impact of jokes you already know the punch lines to is pretty limited to a guffaw rather than a "pee in your pants" laugh.

so check out the Seinfeld thing and save yourself the time and money to fly here to Chicago and see this show-  here is a link to save you even more time (you're welcome!)