back to school (catching up)

so I did get back to my classes at the beginning of the week and again learned quite a bit in my Florida Maritime History class- 3.5 full pages of notes worth! LOL 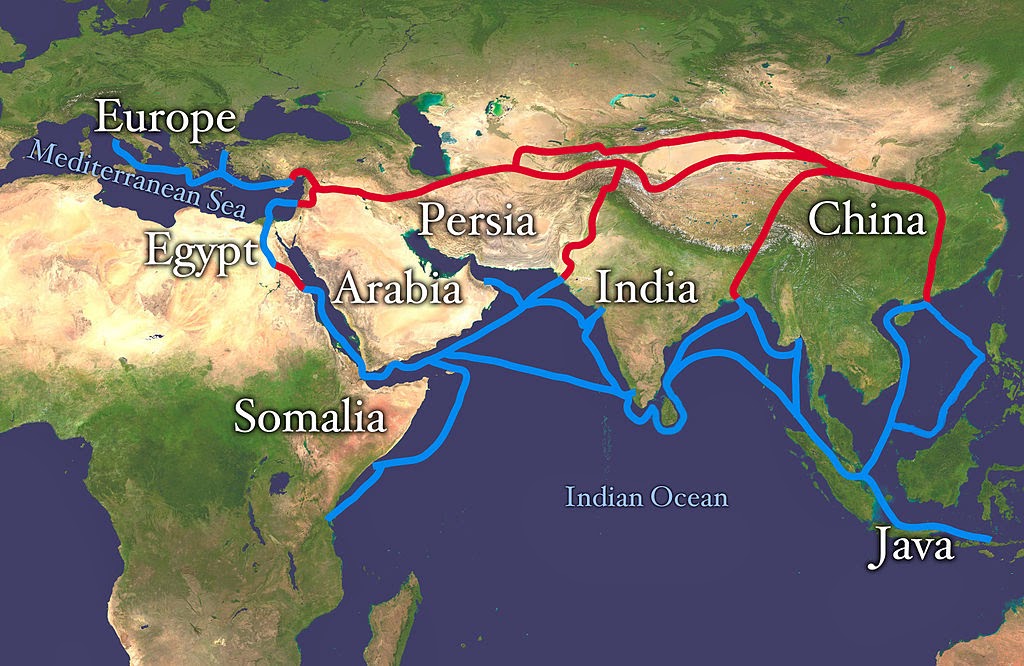 as wikipedia so ably explains:

A prelude to the Age of Discovery was a series of European expeditions crossing Eurasia by land in the late Middle Ages. Although the Mongols had threatened Europe with pillage and destruction, Mongol states also unified much of Eurasia and, from 1206 on, the Pax Mongolica allowed safe trade routes and communication lines stretching from the Middle East to China. A series of Europeans took advantage of these to explore eastwards. Most were Italians, as trade between Europe and the Middle East was controlled mainly by the Maritime republics (like Venice and Genoa.) The close Italian links to the Levant raised great curiosity and commercial interest in countries which lay further east.  In 1291, in a first Atlantic exploration attempt, merchant brothers Vivaldi sailed from Genoa with two galleys but disappeared off the Moroccan coast, feeding the fears of oceanic travel.

From the 8th century until the 15th century, the Republic of Venice and neighboring maritime republics held the monopoly of European trade with the Middle East. The silk and spice trade, involving spices, incense, herbs, drugs and opium, made these Mediterranean city-states phenomenally rich. Spices were among the most expensive and demanded products of the Middle Ages, as they were used in medieval medicine, religious rituals, cosmetics, perfumery, as well as food additives and preservatives. They were all imported from Asia and Africa. Venetian merchants distributed the goods through Europe until the rise of the Ottoman Empire, that eventually led to the fall of Constantinople in 1453, barring Europeans from important combined-land-sea routes.

European sailing had been primarily close to land cabotage, guided by portolan charts. These charts specified proven ocean routes guided by coastal landmarks: sailors departed from a known point, followed a compass heading, and tried to identify their location by its landmarks. For the first oceanic exploration Western Europeans used the compass, progressive new advances in cartography and astronomy. Arab navigation tools like the astrolabe and quadrant were used for celestial navigation.

A major advancement was the introduction of the caravel in the mid-15th century, a small ship able to sail windward more than any other in Europe at the time. Evolved from fishing ships designs, they were the first that could leave the coastal cabotage navigation and sail safely on the open Atlantic. Using the caravel, systematic exploration continued ever more southerly, advancing on average one degree a year.  In 1453 the fall of Constantinople to the hands of the Ottomans was a blow to Christendom and the established business relations linking with the east.  King Afonso V of Portugal, who had been inquiring of Genoese experts about a seaway to India, commissioned the Fra Mauro world map, which arrived in Lisbon in 1459.

In 1512, to reward Juan Ponce de León for exploring Puerto Rico in 1508, king Ferdinand urged him to seek these new lands. He would become governor of discovered lands, but was to finance himself all exploration.  With three ships and about 200 men, Léon set out from Puerto Rico on March 1513. In April they sighted land and named it La Florida—because it was Easter (Florida) season—believing it was an island, becoming credited as the first European to land in the continent. The arrival location has been disputed between St. Augustine, Ponce de León Inlet and Melbourne Beach. They headed south for further exploration and on April 8 encountered a current so strong that it pushed them backwards: this was the first encounter with the Gulf Stream that would soon become the primary route for eastbound ships leaving the Spanish Indies bound for Europe. They explored down the coast reaching Biscayne Bay, Dry Tortugas and then sailing southwest in an attempt to circle Cuba to return, reaching Grand Bahama in July. (source Wikipedia)

this is all background for the things we went on to in class- but the precipitating event for the exploration for a westward route to the Indies and Asia was the blocked Spice Route... during the period of early exploration the sailors were creating "roteiros" which roughly translates into itineraries with lots of information about what they encountered during their voyages- the translator on the Internet says this about roteiros- 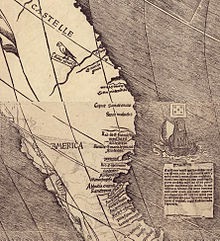 By 1492 the Spanish have ousted the Moors from the Iberian peninsula and could now turn their attention to explorations (Portugal had completed their reconquest earlier and hence started earlier) - Columbus had tried to interest Portugal in his "go west to get east" theory but they had taken a pass - so he went on to Ferdinand and Isabella of Spain.  She was not interested but He was... so they funded half of the voyage and Genoa funded the other half and off Columbus went--- and of course we know he landed in what is now Cuba but this began an explosion of Spanish exploration of the new world. 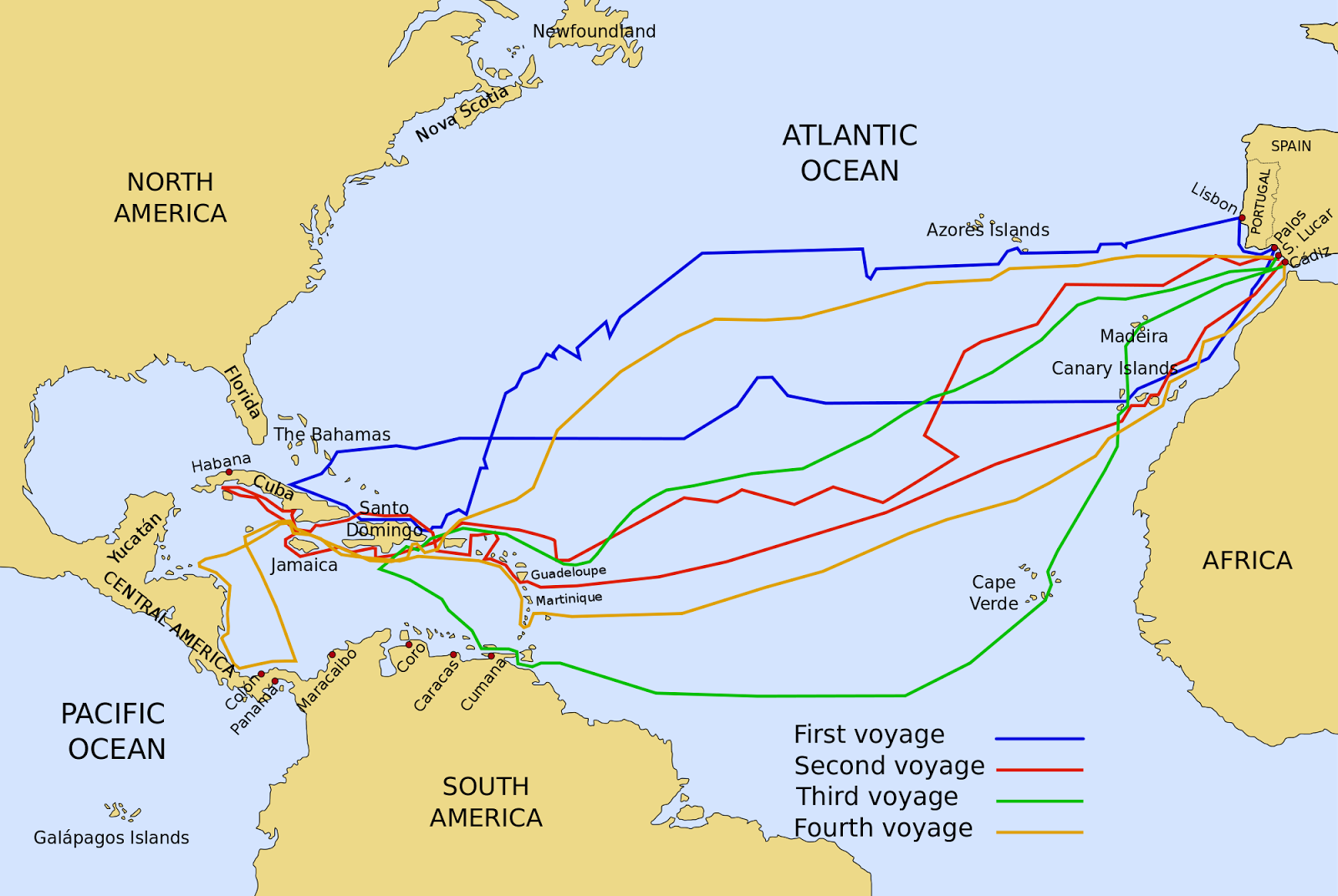 in 1499 Vasco de Gama had gotten to India and reopened trade to the East by going around Africa and into the Indian Ocean... but by then there were other reasons to be coming to the Americas - and they included 1. mercantile 2. religious and 3. political (a new outlet for the armed royalty of Spain who were without the crusades to distract them from possibly overthrowing the king....LOL)

the men who followed Columbus into the new world believed that fame and riches were not only within their grasp but were theirs by right. AND- and here we come to the point of all this background- the only area of the new world to expose their weaknesses and to successfully resist them was Florida!

in 1513 Ponce de Leon was supposed to have discovered Florida - but oddly he found people here who spoke Spanish (LOL) and a 1505 map clearly shows the Florida peninsula. The reaction of the native population was immediately hostile- because the slavers had brought disease and enslaved those they could thereby "poisoning the well" long before the arrival of Ponce de Leon. His license to search for lands north of Cuba made him the "owner" of Florida. (we know about this due to vast amounts of paperwork filed in the courts over disputes that took place in that era and now held in the Archives of the Entrada)

One of the men- Alaminos (a navigator) remained behind and mapped the voyage- as well as identifying the ability to use the Gulf Stream to push the return voyage to Europe like a catpult- (remember all that stuff about the Gulf Stream in the last Maritime Class post? LOL- it's all starting to come together...)

Ponce made a second voyage in 1521 where he is attacked at sea by the Calusa at Matanzas (now Sanibel Island area)- even though this time he  brought settlers with him he was forced to retreat to Cuba.   (so twice defeated by Florida and in retreat to the Spanish stronghold of Cuba)

next up in terms of expeditions- Pánfilo de Narváez, who used maps showing such detail as the barrier islands, DeVaca wrote a journal with eyewitness descriptions of interactions with the natives- although the Temukan leader offered friendship - their guides led the Spaniards astray and they were lost for many months in the swamps of northern Florida- the survivors built rafts to return to sea and there were only 4 survivors of the expedition of more than 600.  A fifth survivor remained in Florida enslaved for 12 years. So another unmitigated disaster!

LOL- which brings us to Hernando De Soto-

He was the epitome of the Spanish Conquistador- and rode with Pizarro in conquest of the Inca Empire.  He planned carefully and learned from the prior defeats at the hands of the Florida native populations.  His expedition brought all it would need to the new world to found a settlement. He sailed from Spain in 1537 and then spent more than a year in Havana planning more details- he planned to set up a colony and had even identified a full bureaucracy to run the colony before he left Cuba. He left Havan in 1539 and had nine ships - he landed off Long Boat Key near the mouth of the Manatee River - with 750 people and 220 horses, leaving 100 people in Tampa Bay and marching inland with 500. 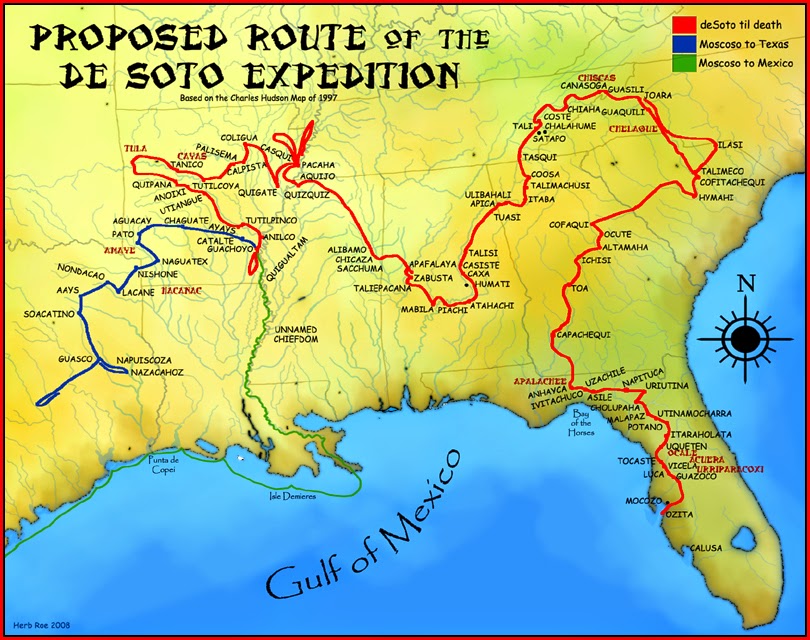 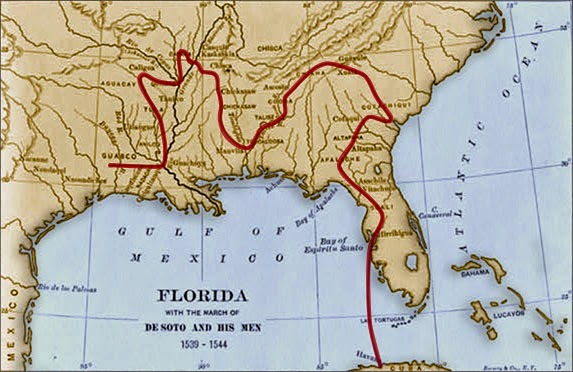 However during the inland march the careful planner underwent a personality change and became an opportunistic plunderer. He spends years wandering the inland as far as Tennessee and ends up dying in 1542 west of the Mississippi River with no colony founded and with the Europeans having devastated the local populations with the spread of diseases which began the collapse of the native population.  No European invaders successfully conquered Florida but that didn't stop them from trying.

Philip II wanted an overland route from the Gulf to the Carolinas to bring his plundered treasure back to Spain without threat of piracy which was rampant on the trade routes. So DeLuna was the fourth explorer to try it and lost nine ships in a tropical storm and eventually lost his mind when the two of the last three ships of the expedition were lost off Cape Hatteras and a single ship survived the ordeal. This led to Philip II banning exploration of Florida for more than a decade. Ultimately he had to return because he needed the wealth of the americas to support the "reformation".. and needed way-stations (safe harbors) for the ships between the old world and the new.

Only Florida defeated and expelled the Spanish invaders- the Inca, Aztec and Caribbean cultures all fell to the invaders in single expeditions.

and excellent article on this topic can be found here:
http://teachingflorida.org/article/european-exploration 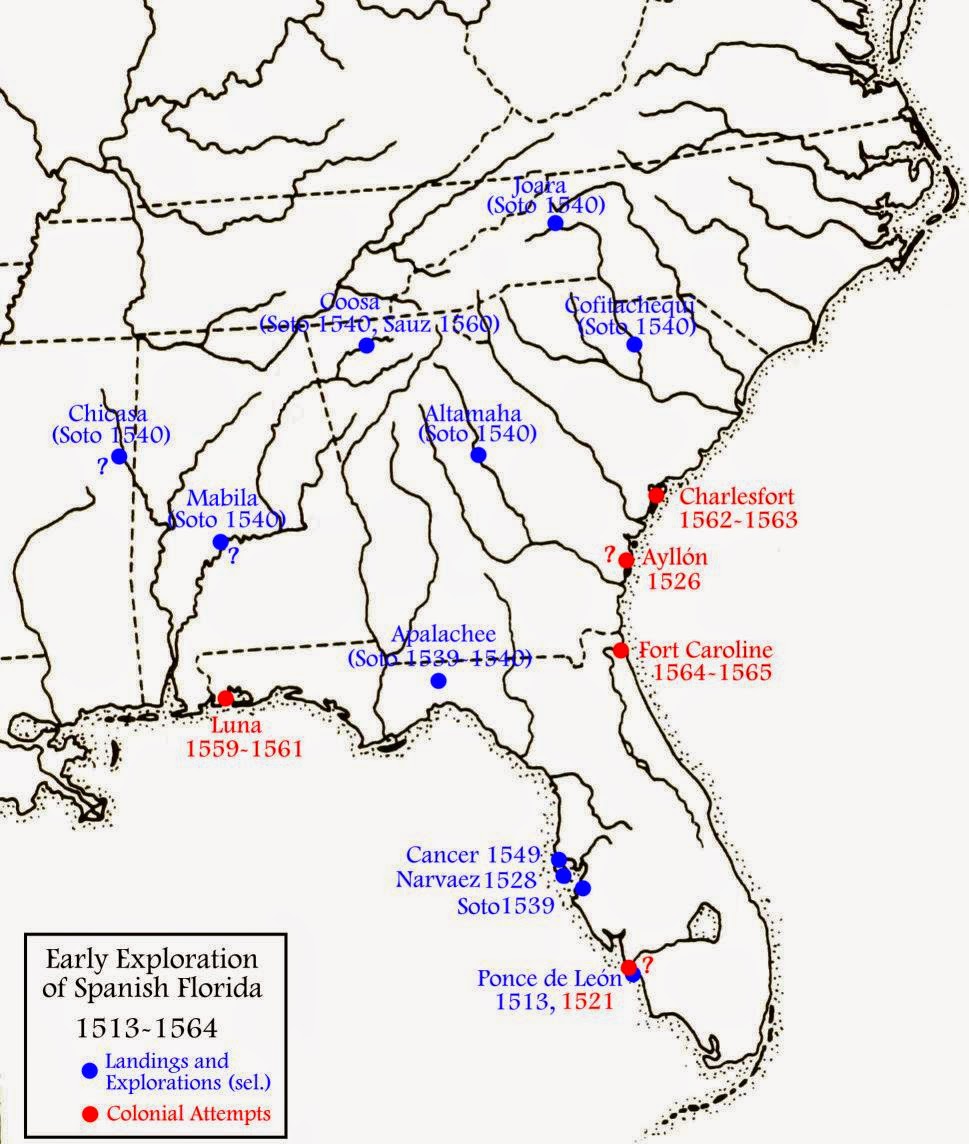 so lots of info in my Monday class- and I am sure there will be more next week-
Posted by TOR at 6:37 PM