I wasn't sure which topic would show up next for posting- because I have at least two things to bring up- and hence the Abbot & Costello reference- but... the plays the thing... so here we go... 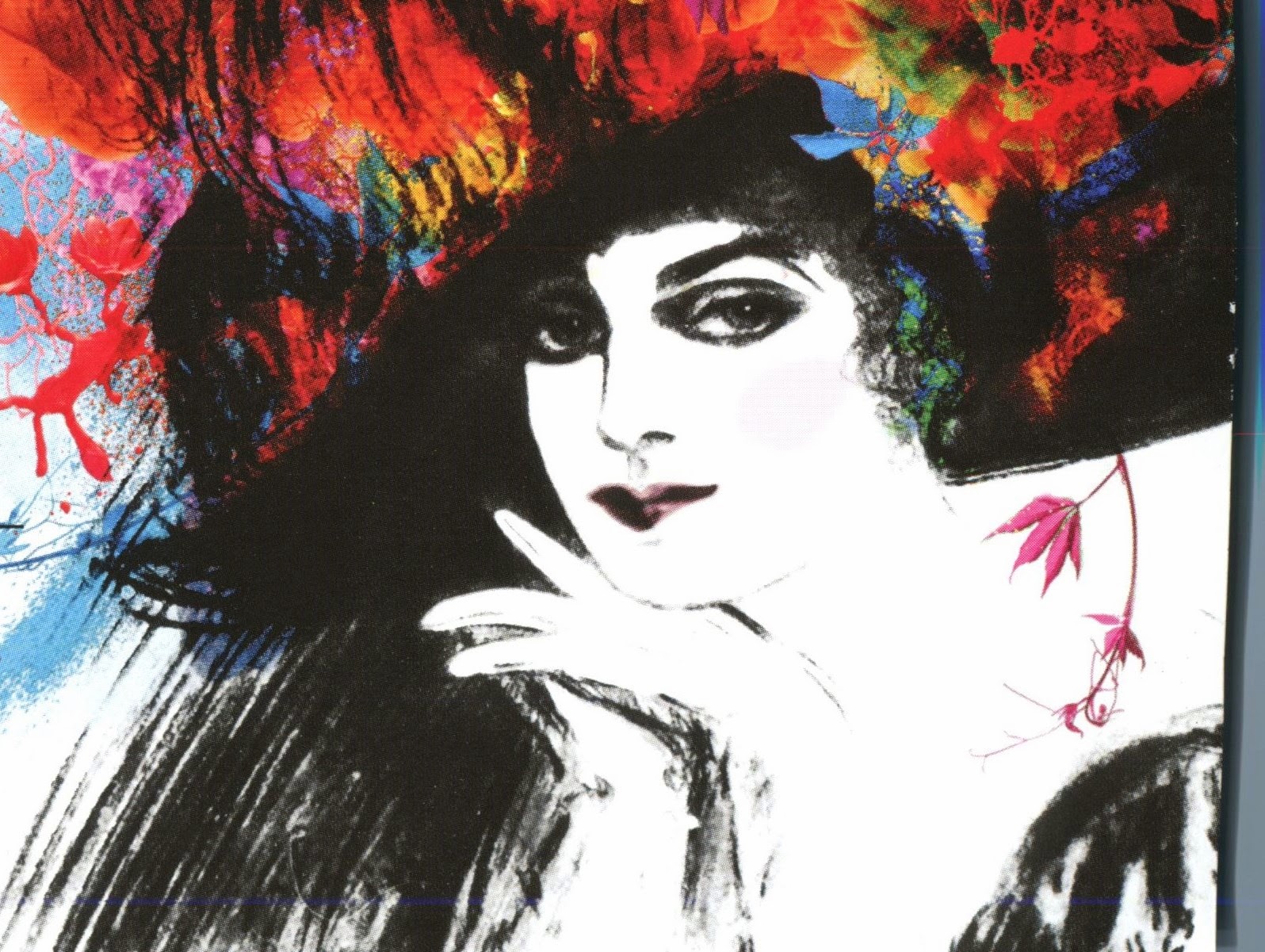 our plans for the theater were made late last summer and when our friends scheduled their visit we were thrilled to find a couple of additional seats so we could all go to see the Thornton Wilder play The Matchmaker.  Here is a short blurb from the Thornton Wilder Society website- 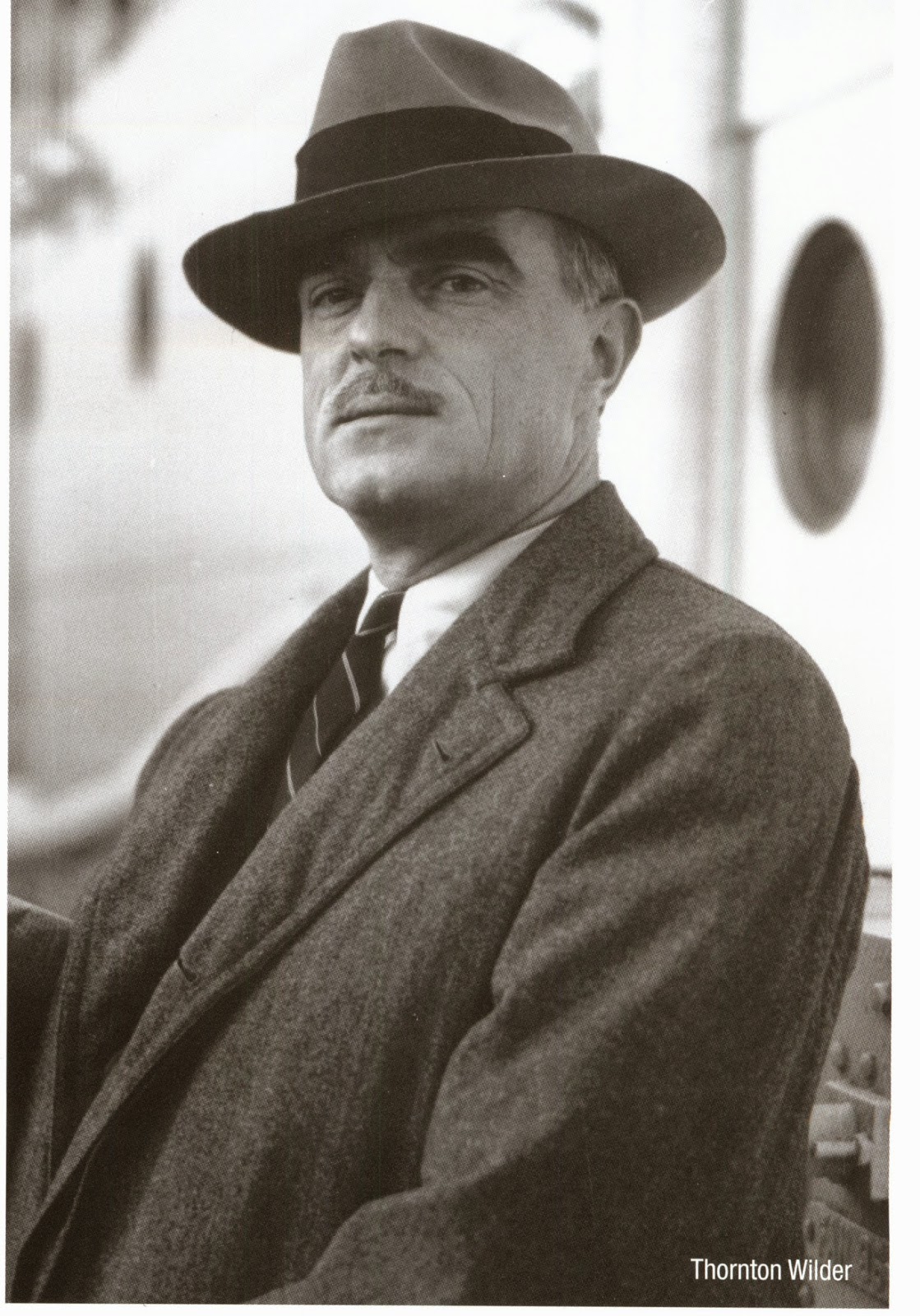 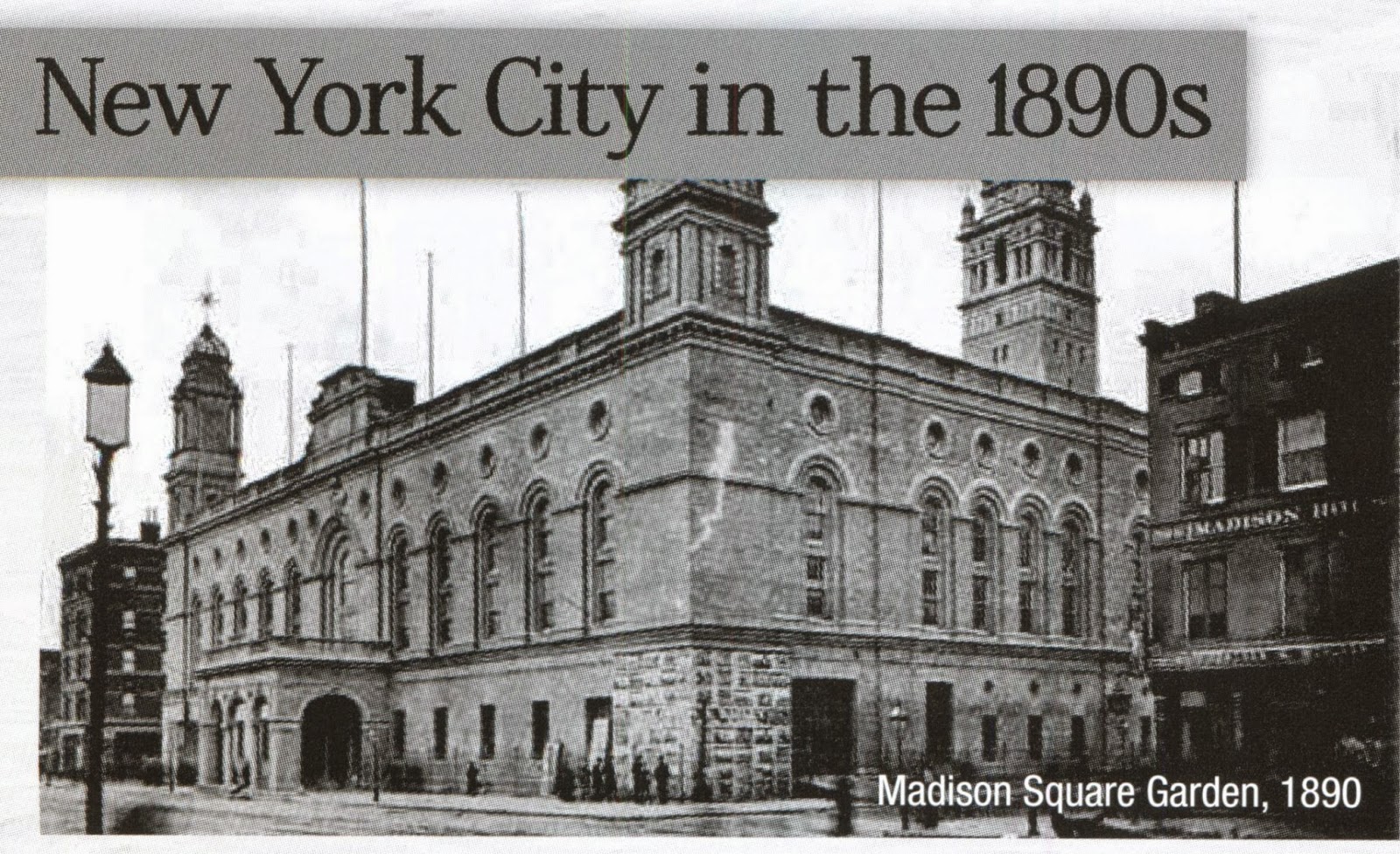 The play, set in the 1880s, opens at the home of Horace Vandergelder, located above his successful hay, feed and provision store in Yonkers, New York. A widower, and immensely proud of being a half-millionaire, Horace is preparing for a trip to New York City. Having rejected the suit of an artist, Ambrose Kemper, who wants to marry his niece, Ermengarde, Horace has decided to send his niece away to frustrate any wedding plans. After Vandergelder leaves, Dolly Levi, a friend of his late wife, utilized by Horace as a marriage-broker, enters. Dolly is sympathetic to the niece’s romance, and agrees to help Ermengarde and Ambrose. When Vandergelder returns, he tells Mrs. Levi that he now plans to marry the New York milliner Irene Molloy. In a scene incorporated almost word-for-word from Molière’s The Miser (L’Avare), Dolly convinces him that she has found him a perfect wife, with the result that he agrees to delay his marriage proposal to Mrs. Molloy. Cornelius Hackl, the chief store clerk, and Barnaby Tucker, another clerk, decide to take advantage of Vandergelder’s absence by themselves going for an adventure in New York.

Act Two begins with Irene Molloy explaining to her assistant, Minnie Fay, that she will accept Horace’s proposal, although she does not love him, so that she can leave the hat business. Walking in the neighborhood, Cornelius and Barnaby suddenly see Horace and Dolly, and dash into the hat shop to hide. In a farcical scene, Horace discovers the presence of the hidden men, and, scandalized, tells Irene that he is ending their relationship. Cornelius falls in love with Irene. Since Dolly has said that the clerk is really a wealthy socialite, Irene insists that Cornelius and Barnaby take her and Minnie to dinner at the Harmonia Gardens Restaurant.

In the Third Act, Horace arrives at the same restaurant, followed by Dolly with Horace’s niece, Ermengarde, and her boyfriend, Ambrose. Having noticed them, Horace arranges for a cab driver to intercept the young couple when they leave the restaurant and take them to the home of Flora, his relative. Irene, Minnie, Barnaby and Cornelius then enter, and are seated at a table next to Horace and Dolly, separated only by a screen. Irene orders expensive food and champagne, causing Cornelius to fret about paying the bill. Horace has accidentally dropped his wallet, which his servant finds and mistakenly gives to Cornelius. Although the clerk eventually tells Irene that he is not rich, Irene is supportive and tells him that they should just have a good time. Dolly tells Horace that his prospective bride has eloped with someone else. In a scene emphasizing eating and enjoyment, Dolly states that she herself would never marry Horace, thus planting the idea in his head. Cornelius and Barnaby, having discovered Horace’s presence, try to escape by disguising themselves with women’s coats and veils. Horace, however, recognizes and fires them. Ermengarde enters and faints, and is carried out by Ambrose. Dolly summarizes Horace’s losses, and broaches more directly the subject of marriage.

In the final act, all the characters arrive at the home of Flora van Huysen, Horace’s relative. Flora misidentifies the romantic couples, believing, for example, that Barnaby (dressed as a woman) is Horace’s niece, and that the real Ermengarde and Ambrose are somebody else, so that the farcical situation becomes even more chaotic. Eventually, true identities are revealed, and Flora persuades Horace to let his niece marry Ambrose. In a grand soliloquy, Dolly addresses her departed husband on her wish to rejoin the human race and to marry Horace in order spread his money around, creating happiness. Horace enters and proposes marriage to Dolly. Cornelius also decides to marry Irene. The play concludes with Barnaby speaking to the audience about the importance of having enough adventure in one’s life. 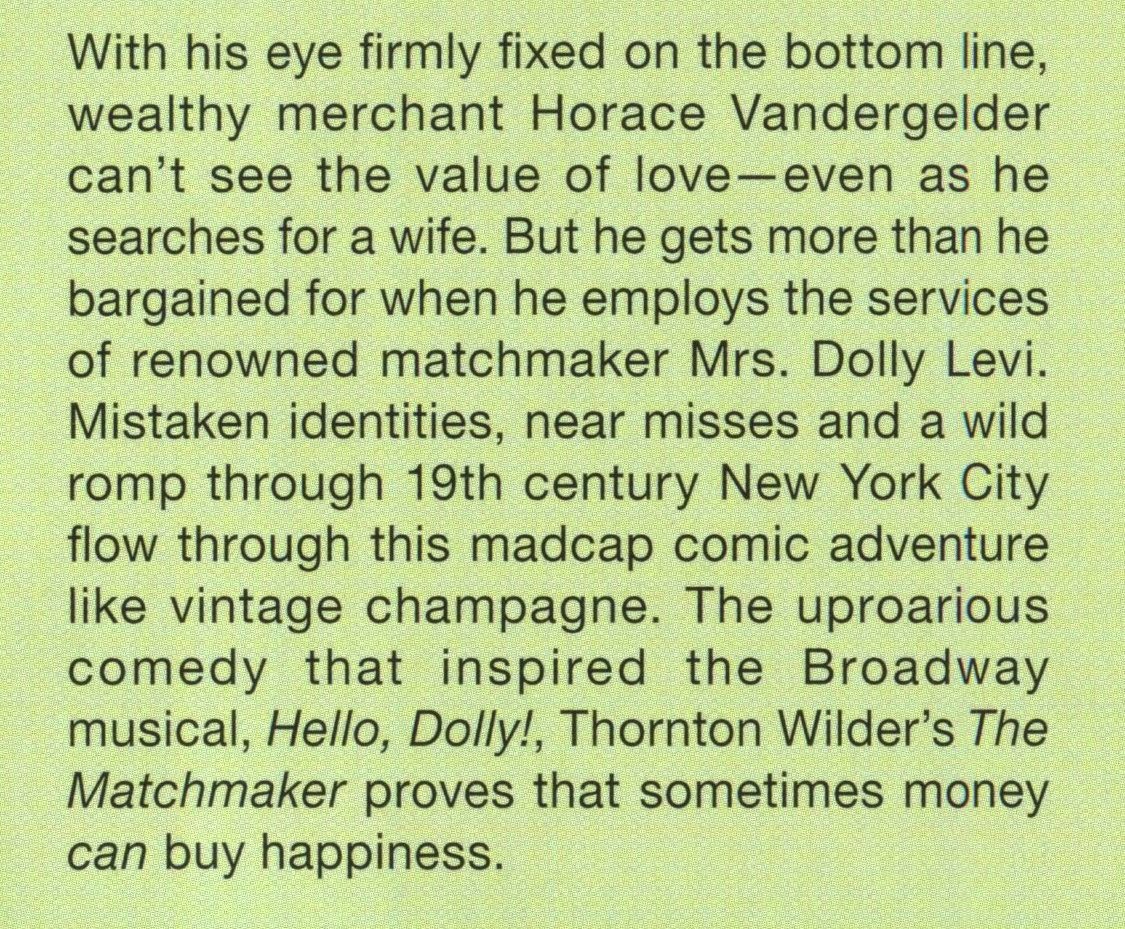 An excellent production with lavish costumes and sets and a multitude of actors only made the evening of farce more enjoyable.  Not only does the plot hearken to Moliere (a favorite since seeing The Doctor In Spite of Himself when I was in eighth grade (ahem- more than four decades ago- LOL) but also uses plot device all Shakespeare lovers will recognize.  A wonderful evening's entertainment. It was also reviewed by the Wall Street Journal... who knew they were tuned into the Sarasota arts scene?

Our own local paper noted the review-


A Farce, Both Sweet and Smart

Thornton Wilder’s rarely seen ‘The Matchmaker’ gets a fun and serious staging in Florida.

The best American play, Thornton Wilder ’s “Our Town,” is also the most popular American play. While this is a nice coincidence—if you want to call it that—Wilder’s other full-length plays don’t get done much nowadays, in part because everybody does “Our Town” instead of “The Skin of Our Teeth” or “The Matchmaker,” which ran on Broadway for 486 performances but hasn't returned there since it closed in 1957. In both cases, scale is also part of the problem: It takes 16 actors to do “The Matchmaker” and more than two dozen for “The Skin of Our Teeth,” on top of which “The Matchmaker” requires four sets, thus putting it out of the reach of cash-conscious drama companies.

In addition, “The Matchmaker” has the further disadvantage of having been turned into a musical, Jerry Herman’s “Hello, Dolly!” The colossal success of Herman’s brassy simplification of Wilder’s play inevitably pushed “The Matchmaker” still further into the wings, where it seemed fated to remain until Sarasota’s Asolo Repertory Theatre came along. Asolo Rep is a professional theater company that is also a drama school, meaning that it can cast student actors in smaller parts. This allows it to produce rarely seen large-cast Broadway plays like “Once in a Lifetime,” which it mounted to splendid effect in 2012. “The Matchmaker” is another natural choice for the company, and Asolo has done right by one of the sweetest and smartest romantic farces ever written.

“The Matchmaker” is being performed in Asolo’s Mertz Theatre, an uncommonly well-proportioned 500-seat house whose elegant interior was transplanted to Sarasota in 1990 from Scotland, where it was originally built in 1903. I can’t imagine a more appropriate venue for so winsome a play.

You can read the whole review here: http://www.wsj.com/articles/theater-review-of-the-matchmaker-a-farce-both-sweet-and-smart-1421980956 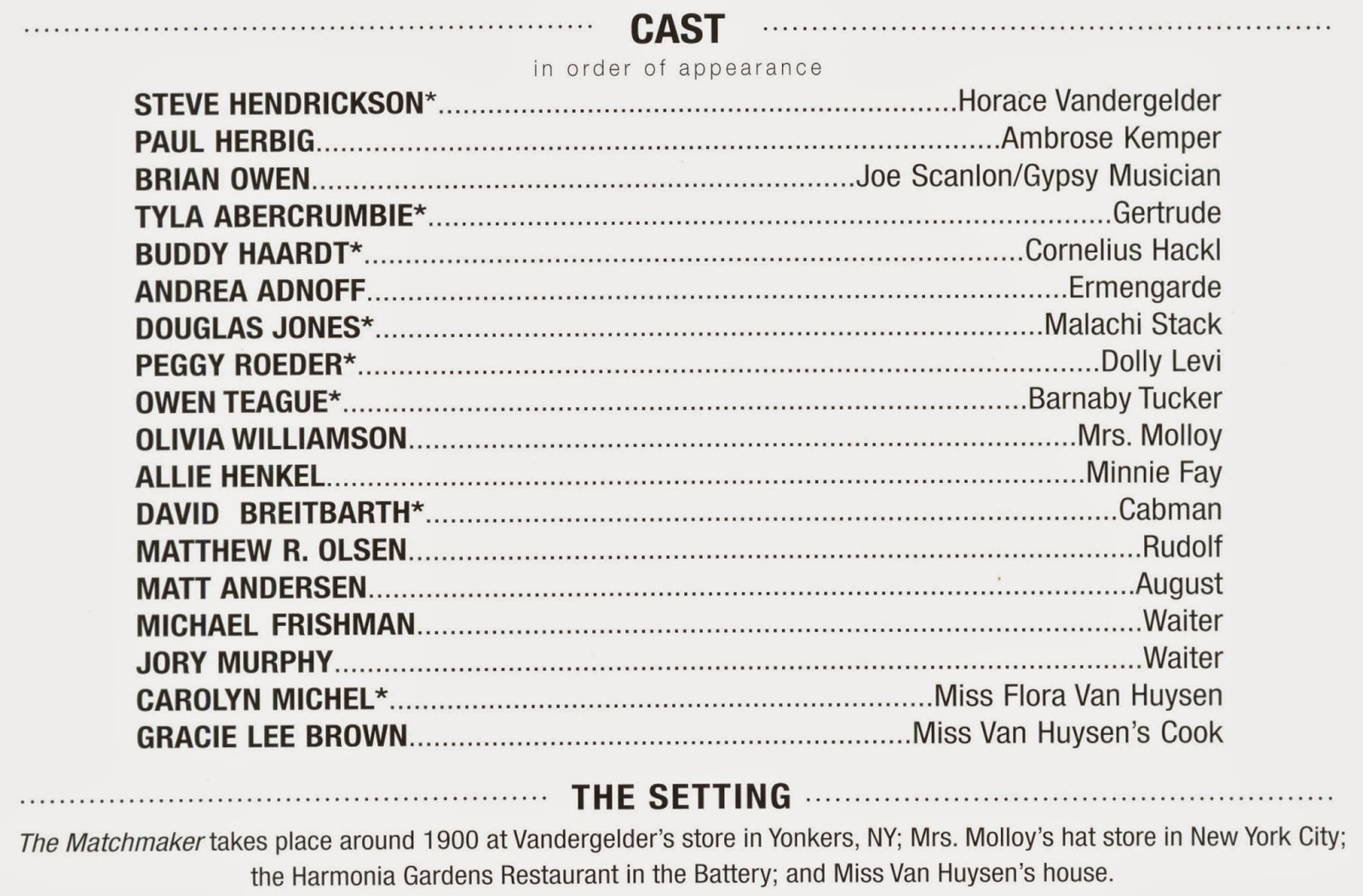 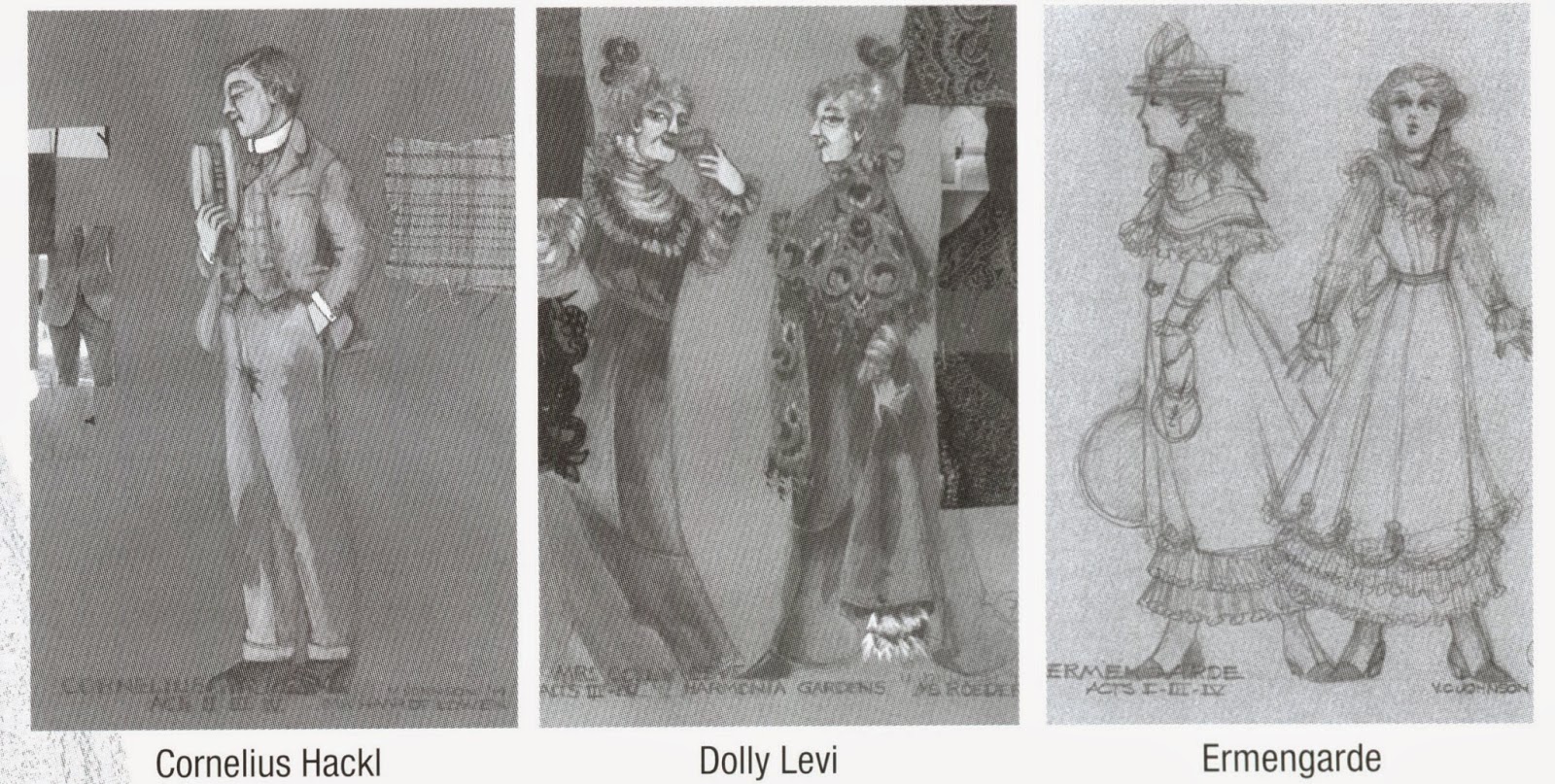 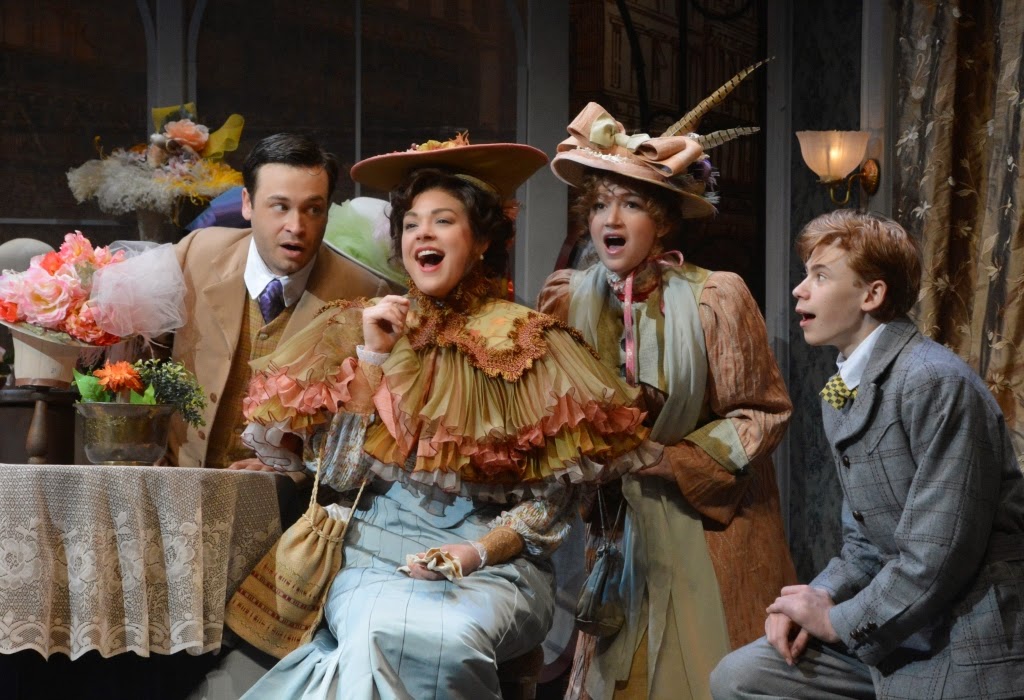 so yes- we loved it, not sure about our friends- I know they go to a lot of concerts but not sure how much theater is incorporated into their very busy schedules.... 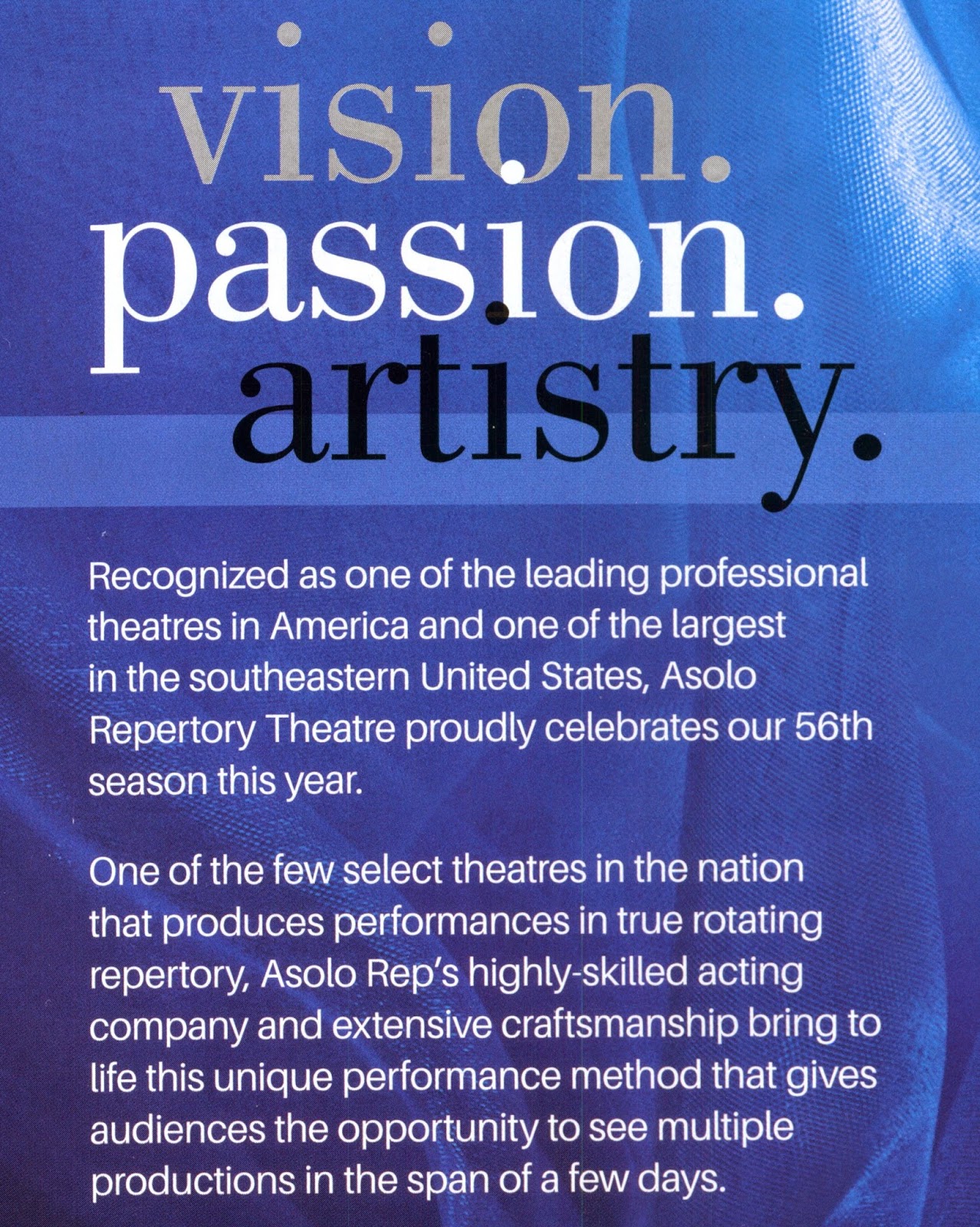 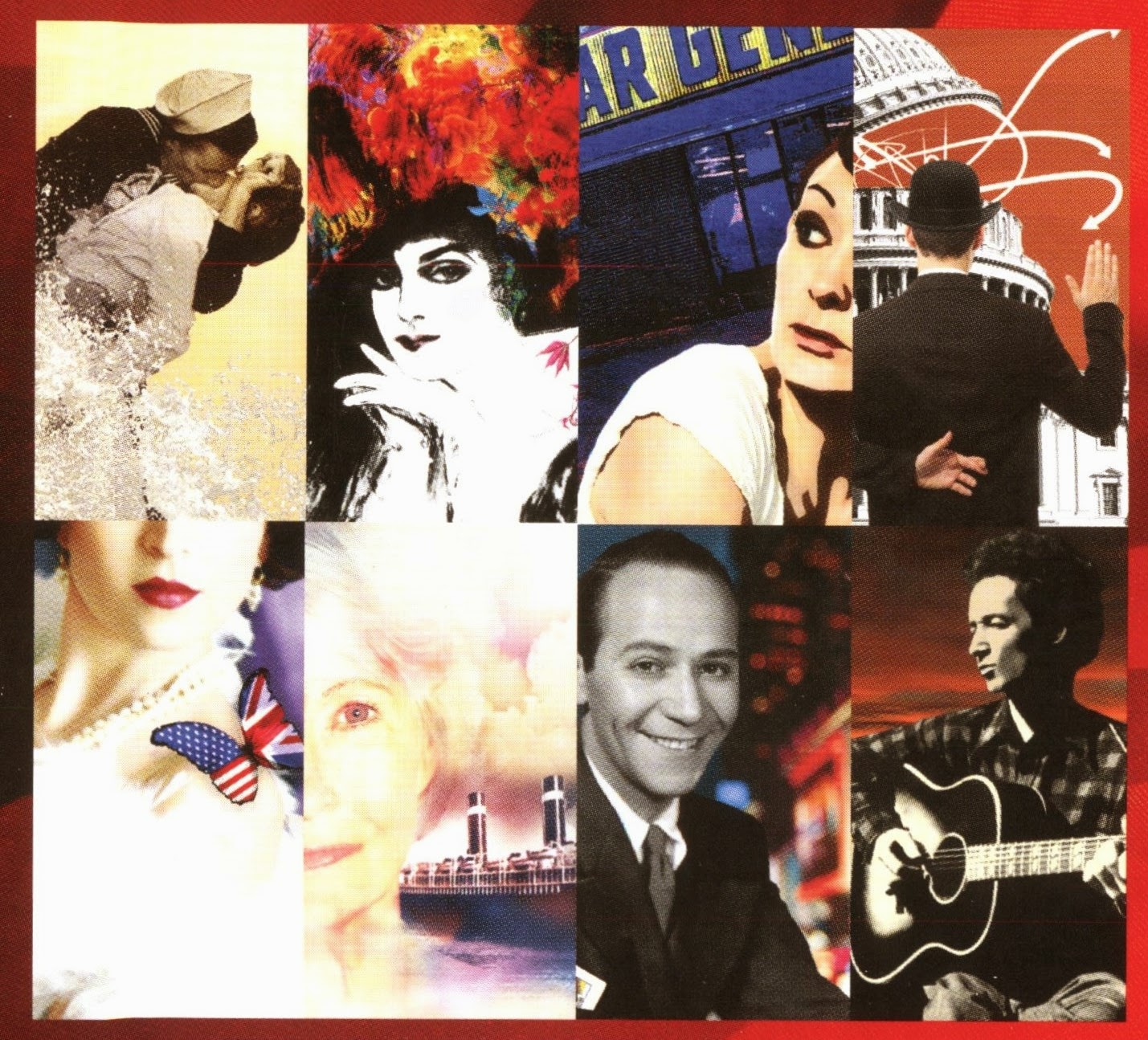 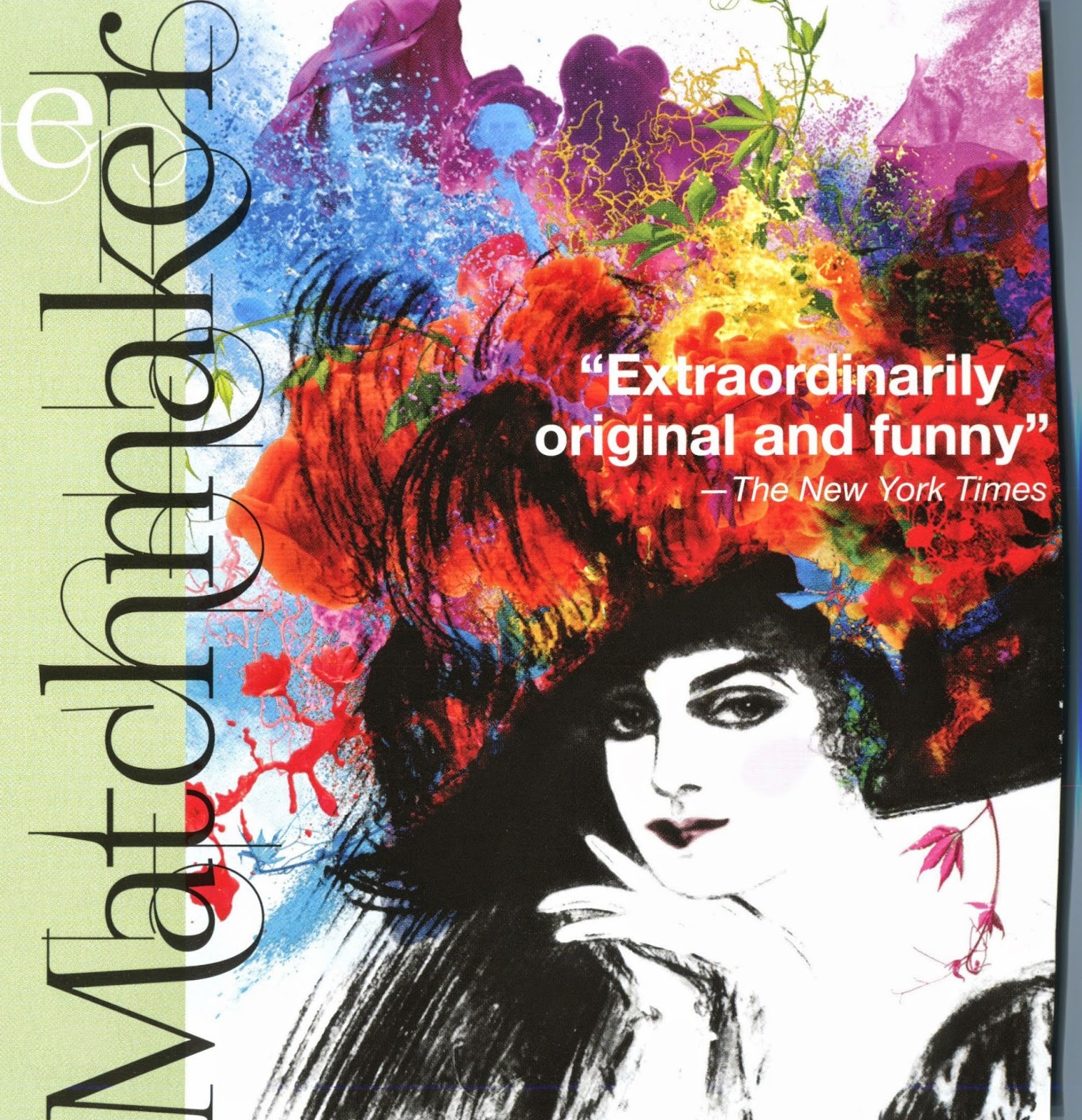