we return to favorites

One place in our neighborhood that we reserved long before our return to the north for the summer was goosefoot.  A number of years back our friend Sheila had a group dinner there (not long after it opened) and we found it "brilliant" as the Brits say...LOL  We completely loved the concept of having food of the highest level of high end dining right in the neighborhood (a Michelin star was award and confirmed several times) and yet we could bring wines from our ever aging cellar. It was a match made in heaven as far as we were concerned.

Over time we went frequently and became friends with Chris and Nina (the chef owner and his then front of the house spouse - who now works both in the kitchen and up front.) They are a study in contrasts-  outgoing Brazilian Nina and shy perfectionist Chris.  He worries and she soothes.  She also is a matchmaker LOL.

In one of the early years of operation, they decided goosefoot would host a New Year's Eve dinner and invited us to be one of the lucky couples to attend.  At that dinner, because I was at the banquet facing into the restaurant and Phil was on the chair facing me, I got to watch the patrons that evening. There was one man who caught my eye.  He was smiling and obviously happy and having a good time taking photographs.  I said to Phil, there's someone we should meet - he really seems like he is having fun in life.

The next time we went to dinner there I asked Nina about the man. I knew because he was at NYE that he was a regular and so I knew she would remember him. I described him to her and told her he might be Thai because he seemed a mix of backgrounds and had a sort of Asian look - hoping that would help her remember him. She knew immediately who I was asking about.  And said she would find a way for us to meet.

We were here and gone and here and gone in our usual way and so when we finally ended up in the same place (goosefoot) at the same time, it was about eight months later.  And I used an old wine to introduce myself - quite brazenly- to our now good friend Mon.  We were celebrating our brother Steve's birthday and their group was celebrating his wife Beth's birthday, and we were dining in different rooms but we made contact. Mon and Phil exchanged contact information and a few weeks later we heard from Beth about dining with them.

The rest is history well recounted in various posts along the way.  But last night was the very first time we had all returned to goosefoot together and so we told Nina that she had been our matchmaker LOL and how great it was that we had met there.

And last night we had another beautifully prepared, carefully curated meal from our perfectionist friend Chef Chris Nugent- and you are about to follow along with the evening's wonderful menu...

here is the detailed menu from last night- 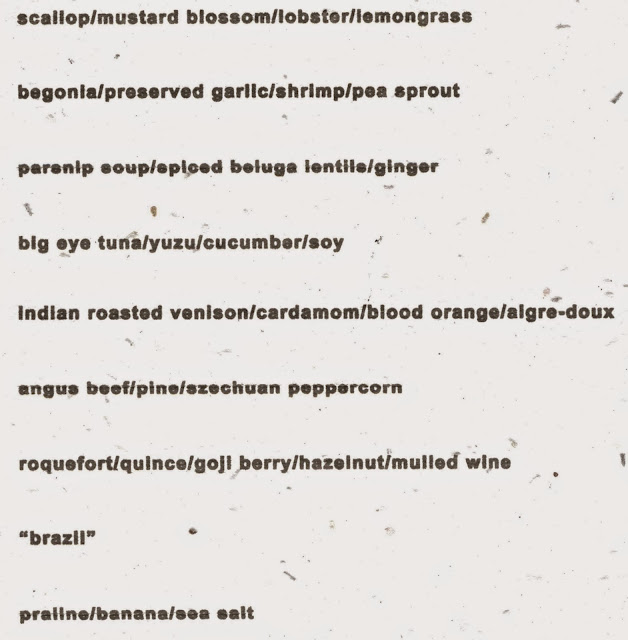 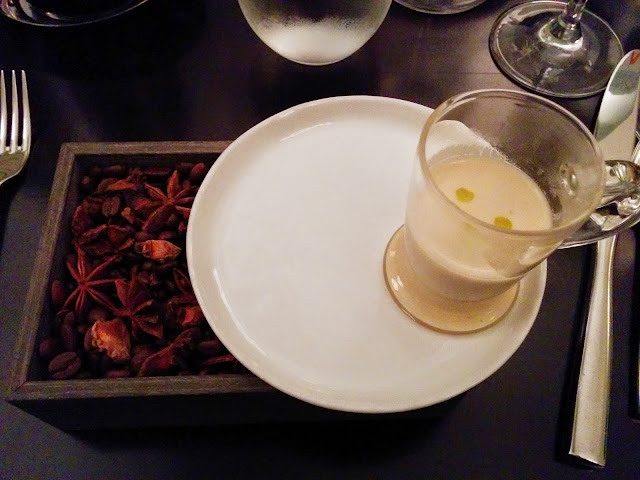 an amuse of truffled white asparagus soup- YUM - I'll have a gallon to go- (and now you can buy Chris's fabulous soups in the goosefoot to-go store/wine shop right next door to the restaurant!!!) 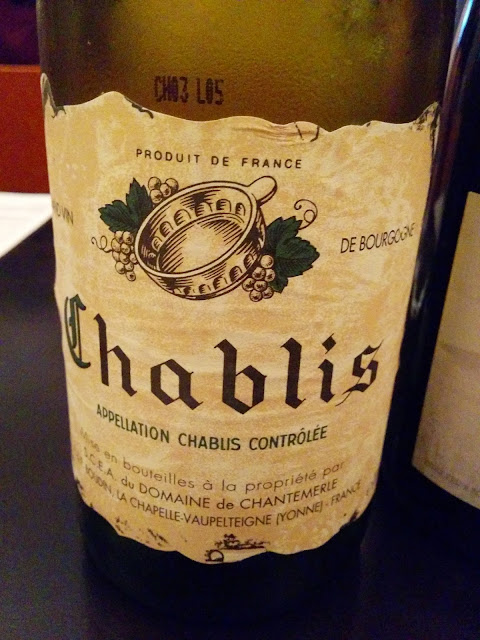 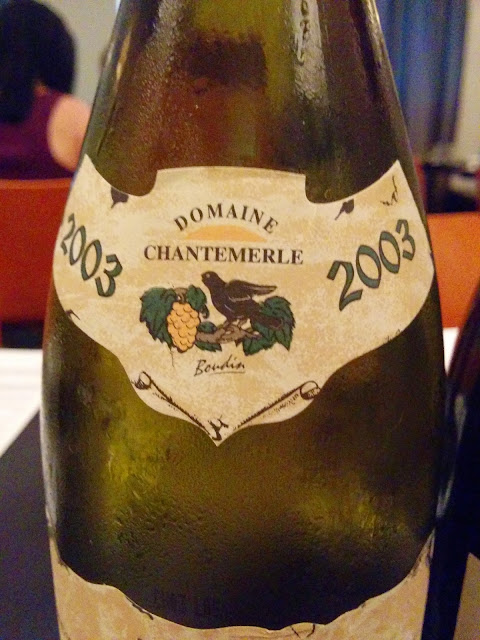 the scallop course- Chris's eye for the detail in the plating is surpassed by none... and he has some new "china" for updated presentations of several of the courses.... 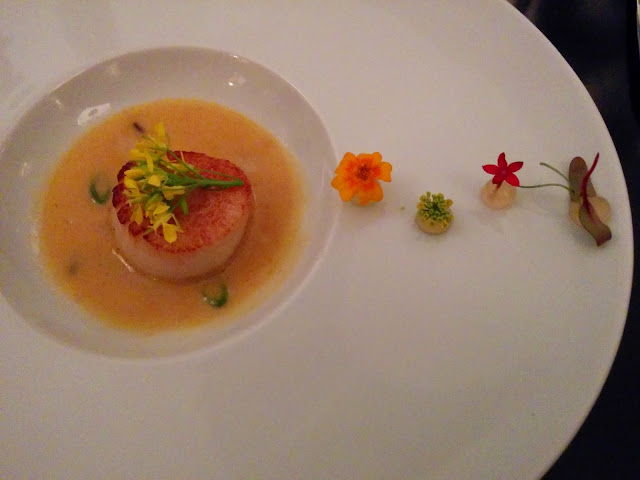 here is an example of the new "plating" - here on stunning birch bark place mats the egg course now comes in its own china egg and is surrounded by fragrant greens in a sort of mini tureen to enhance the experience of the course... 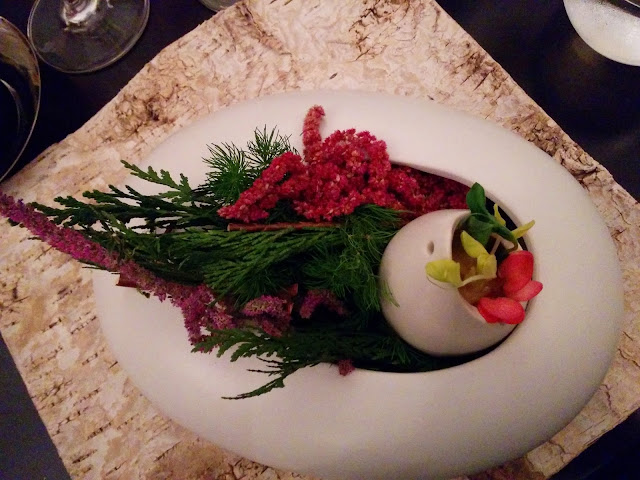 the soup course - and I have to say this is often my favorite course at goosefoot- every soup Chris has ever made and served here has been fabulous!!!! from the corn to the chestnut to last night's parsnip with lentils - each has been full of flavor and extraordinarily delicious! 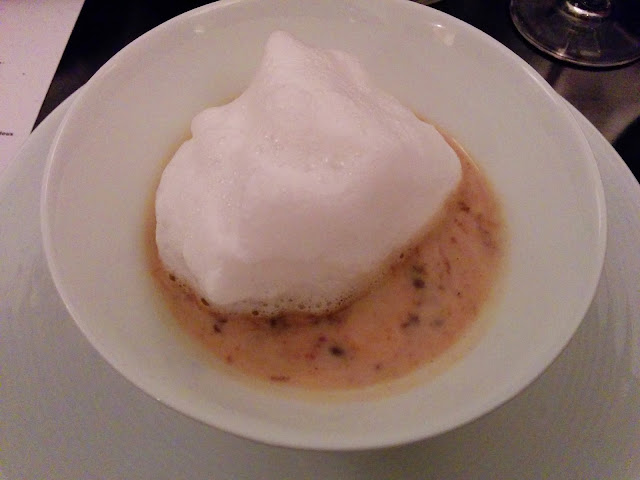 an Alsatian muscat which paired nicely with several of the courses- 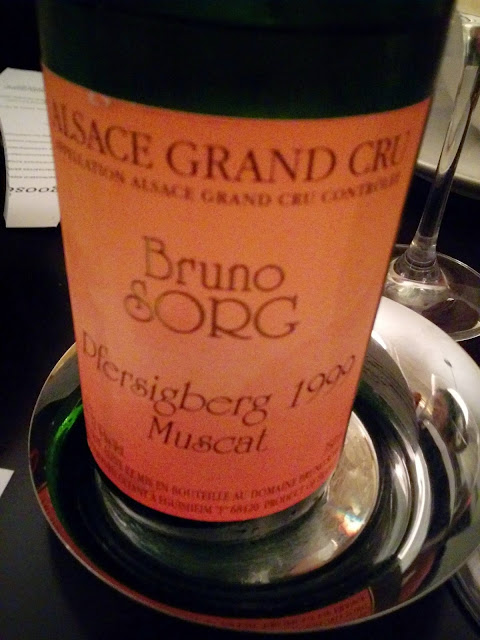 the red wine for the heartier courses of tuna, venison and beef - this was a wine that opened up over time but never became really giving - it was the first bottle we had opened of this wine and we were not particularly impressed - good news is we don't think we have a whole case- LOL 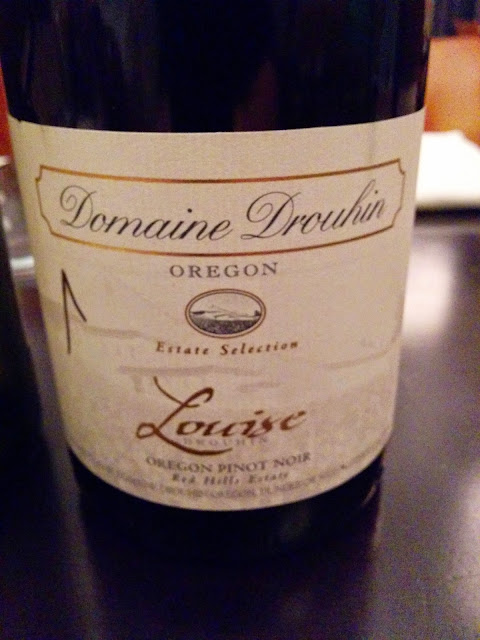 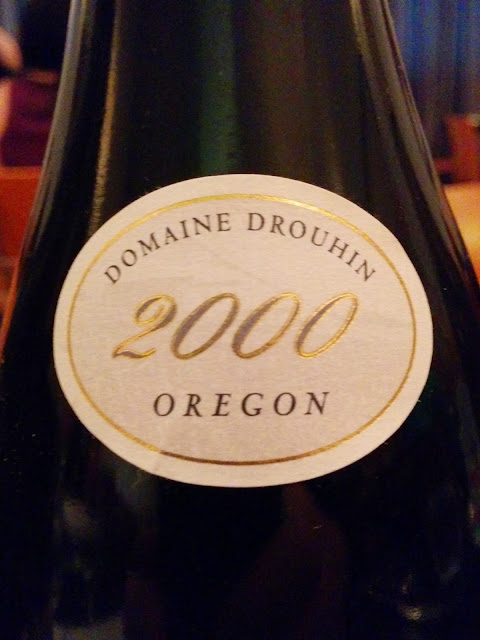 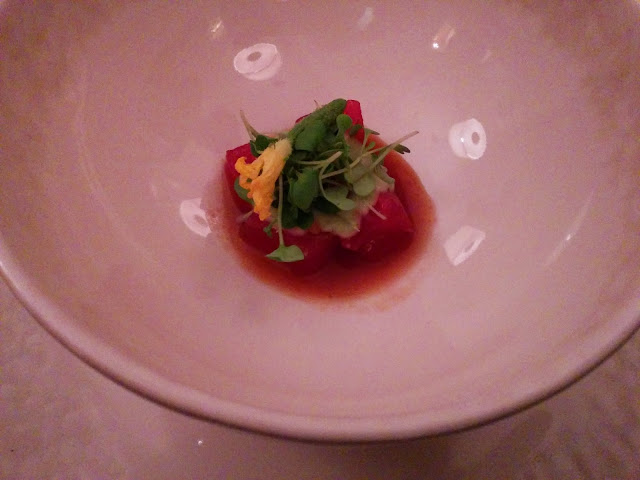 the venison preparation - extremely tender and not at all gamey- really perfectly prepared! 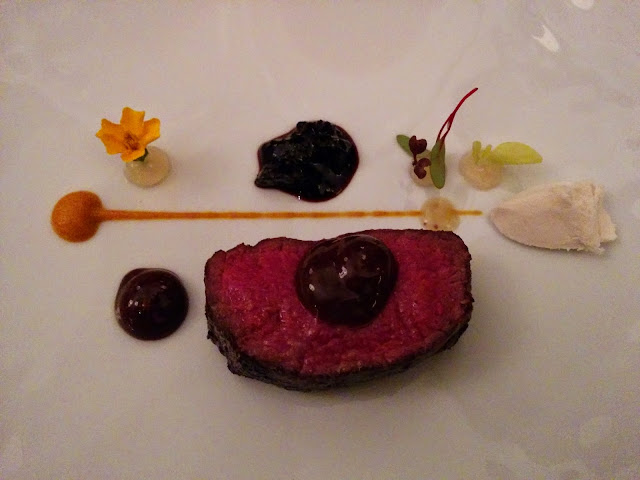 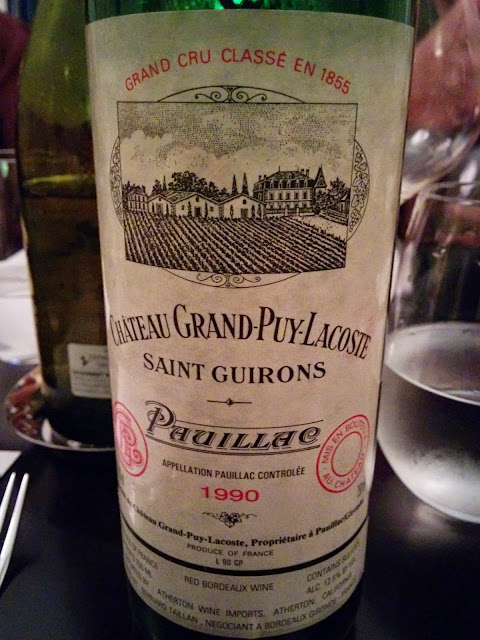 another fabulous course-  the beef! 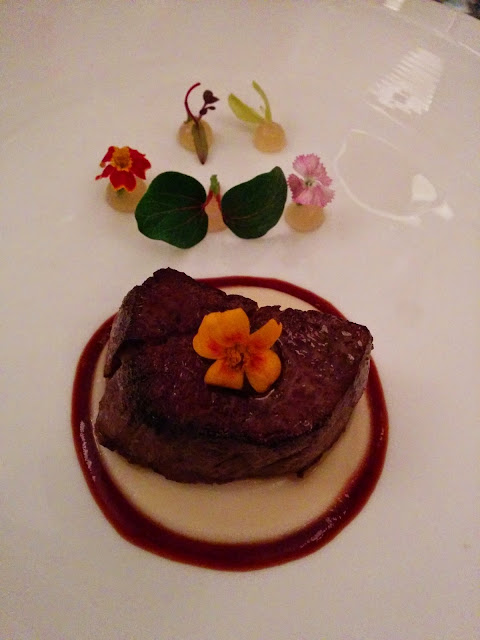 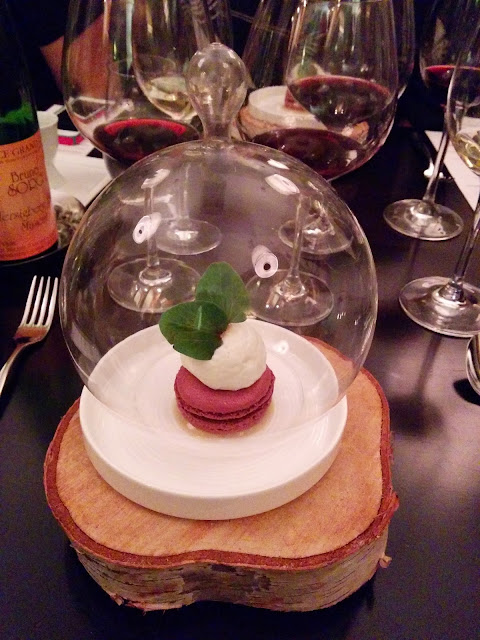 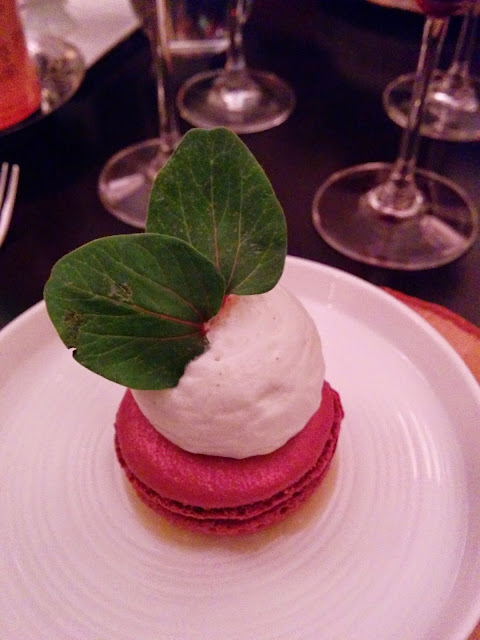 because the "Brazil" dessert was coconut based I had a wonderful little smooth and crunchy combo of a hazelnut cream and cookie with hand painted chocolate to top it off! 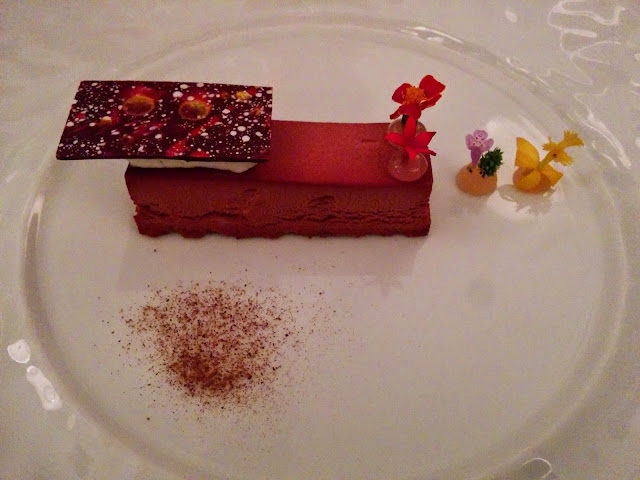 the Brazil course with toasted coconut and various other flavors (sorry about he blurry photo which I shot, too quickly, over Phil's plate just as he was about to dive into the dessert- LOL) 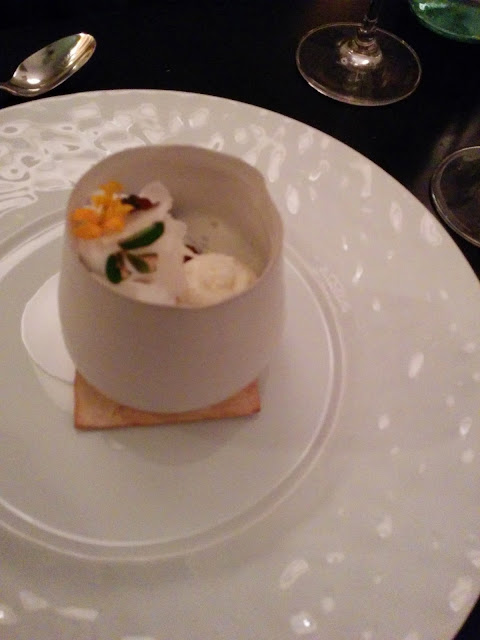 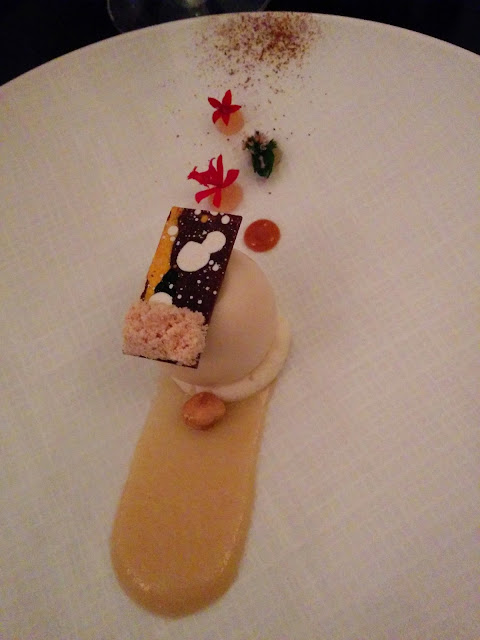 and somehow we got into conversation with Nina and I was so distracted I didn't get a photo of the glorious new presentation of the grand finale - cape gooseberry (Peruvian ground cherry)  which is now served on an incredibly beautiful selection of burled wood planks... next time I promise to be more vigilant.

Chris finally had a break in the kitchen and so we had a chance to catch up with him as well, before heading home... his current staff is all female and so we teased him about his harem :-)

A lovely evening with friends at the place where we first crossed paths, and then met, and now return to as friends. Life is good! Really good!
Posted by TOR at 9:28 AM